Here’s who you should avoid in your fantasy football draft. 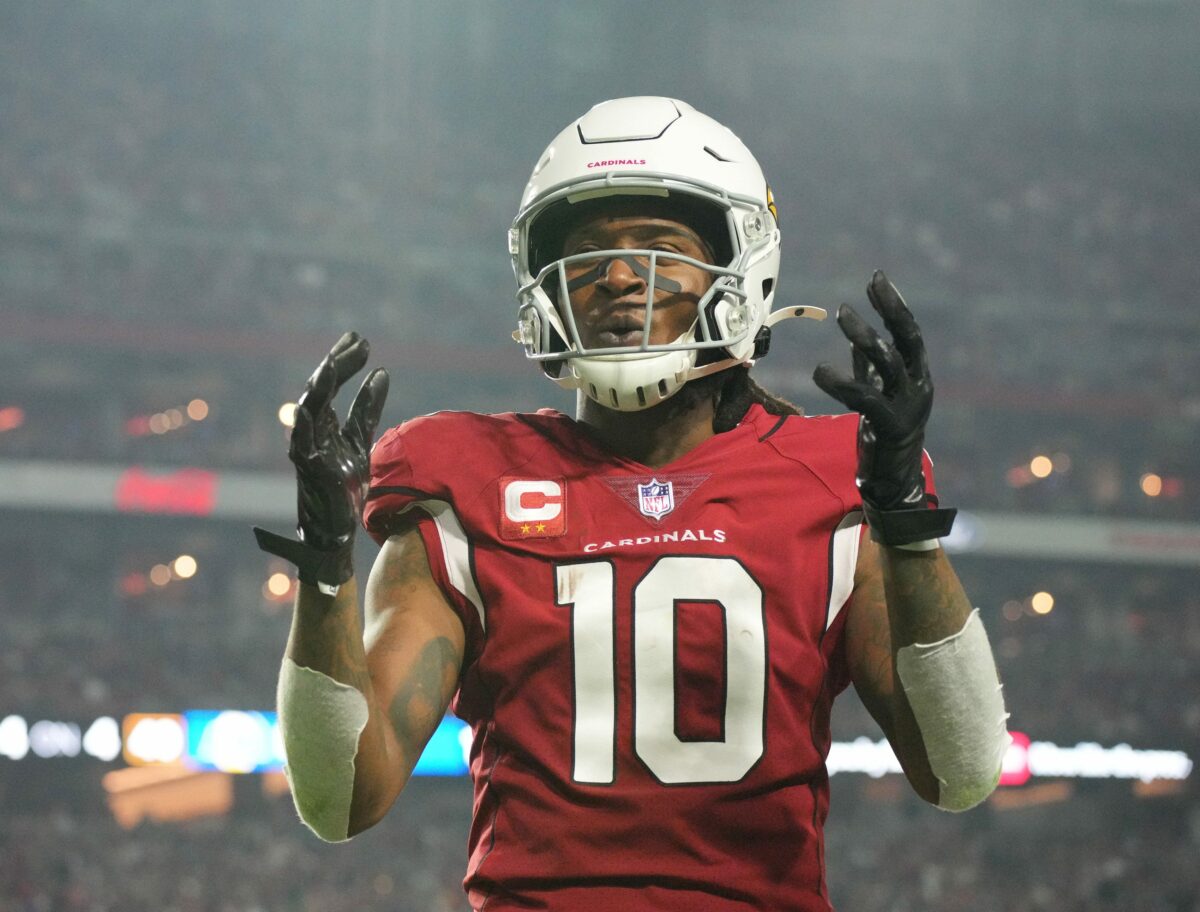 Preseason has wrapped up, and the 2022 NFL season is right around the corner, which means fantasy football draft season is in full swing.

Here’s a quick look at five players to avoid during your fantasy draft this year.

Which fantasy football weapons are poised to rebound in 2022? 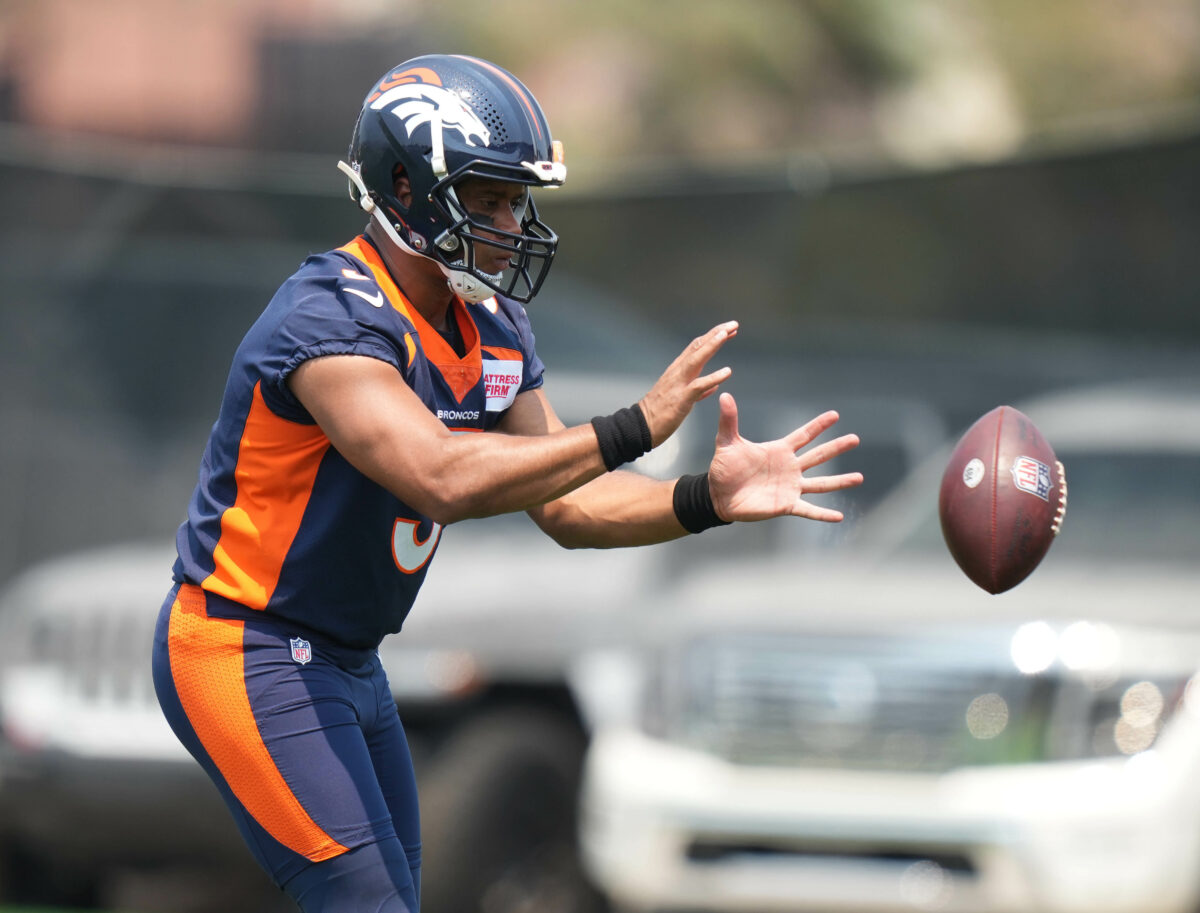 Every season, several proven players regress and even fall off of the fantasy football map due to injury, demotion, a poor system fit, or another unforeseen calamity. Players of the fake game understandably tend to be of the, “What has he done for me lately?” mindset and may underrate some proven options coming off a bad year.

Heading into the 2022 season, we’ll explore which players are most likely to bounce back from a down year in 2021. The players are ordered from least to most important in relation to their potential fantasy returns.

Be sure to sign up for The Huddle to gain the needed edge on your competition. In this space last year, we correctly called bounce-back performances from the likes of Dak Prescott, Austin Ekeler, Deebo Samuel, and Matthew Stafford to help create winning rosters.

Fantasy football players on the rebound for 2022 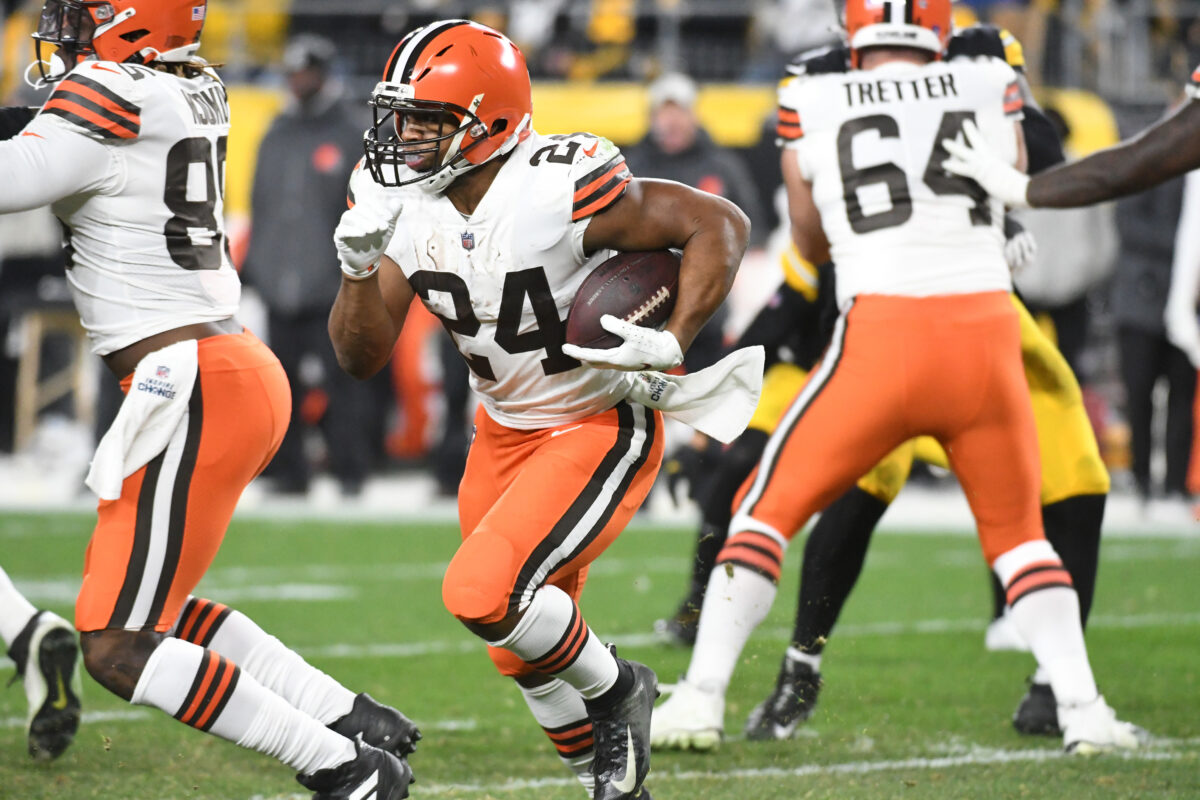 Much like with our May edition of the Mock Draft Series, out of respect for the hosts of this draft, no reference will be made to its identity so the content remains fresh on their end, nor will the entire draft results be published here.

The blurbs about my team below were provided to the draft host and will appear in a magazine as part of a larger evaluation of the draft. Before getting into my individual picks (we didn’t write up our final four), here are a few observations from an 18-round, 12-team, PPR draft.

Here’s a snapshot of the first 10 rounds broken down by number of positional picks:

We were asked to write 35 words per pick to give a little insight as to our draft thoughts:

1:02) RB Austin Ekeler, Las Angeles Chargers: It came down to Derrick Henry being dominant one more time, Cooper Kupp as the safest pick here, or Ekeler remaining healthy. I was most concerned about not having a strong enough RB1 if I chose the wideout.

2:11) WR Mike Evans, Tampa Bay Buccaneers: Knowing the drafter at the turn had an elite RB and presuming WR-WR was in play, I went with Evans before another back. It played out as expected. Evans and Keenan Allen were the best remaining WR1s.

3:02) RB Nick Chubb, Cleveland Browns: I hoped Chubb would survive the turn, and my Round 2 decision paid off. Injuries and time-sharing concerns are real, but Chubb is a TD machine and gives me a legit RB1 as my second back.

4:11) WR Terry McLaurin, Washington Commanders: The debate was McLaurin and Courtland Sutton, who went with the very next pick. McLaurin has proven to be mostly QB-proof and makes for a quality WR2, even with Carson Wentz under center.

5:02) RB Damien Harris, New England Patriots: Three drafts, three Harris selections … it’s not that I’m necessarily a huge fan, but he’s a tremendous RB3. Thanks to Harris’ scoring prowess, none of the remaining backs were definitively better options at this stage.

6:11) WR DeAndre Hopkins, Arizona Cardinals: A strong draft start afforded this gamble. Hopkins will miss six games, sure, but he’s a borderline WR1 lock in PPR upon his return. It’s not too often you can plug that kind of talent into your WR3 slot.

7:02) QB Patrick Mahomes, Kansas City Chiefs: Securing my third-ranked passer in Round 7 ahead of the long end of my wait, Mahomes was tough to let pass. While the WR talent regressed, he makes players around him better and will be fine.

8:11) WR Allen Lazard, Green Bay Packers: Lazard may emerge as the top fantasy receiver in Green Bay after the Davante Adams trade. It’s worth a late-round wager to find out. At a minimum, he’s adequate depth for me while Hopkins is out.

9:02) TE Austin Hooper, Tennessee Titans: I’m much higher on Hooper’s rebound than most, and since I tend to wait on TEs, this one was a no-brainer. Tennessee’s WR situation is shaky, at best, and Hooper is an ideal fit for the system.

10:11) WR Kenny Golladay, New York Giants: Can the talented Golladay stay on the field? His quarterback situation could hold him back, but I’m willing to bank on Brian Daboll getting the most out of Daniel Jones. The rest is up to Golladay.

11:02) RB Marlon Mack, Houston Texans: I should’ve taken Tyler Allgeier over Golladay. The rookie went at the turn, forcing a pivot to Mack. A whole lotta “meh,” but he has a chance, which is all one can ask for this late.

12:11) TE Cole Kmet, Chicago Bears: Kmet is one of my favorites for a breakout season, and the third-year tight end covers my backside if the Hooper gamble doesn’t pan out. There’s legit TE1 potential in Chicago’s new offense.

13:02) RB Jamaal Williams, Detroit Lions: Since the Mack pick could go either way, a safe, reliable veteran was the target, and Williams fits the bill. Plus, D’Andre Swift has proven to be less than a model of health thus far.

14:11) WR Jamison Crowder, Buffalo Bills: In three years with Buffalo, Cole Beasley was a PPR powerhouse out of the slot, and Crowder should have little trouble assuming the role in this pass-heavy system. He provides excellent value-to-upside ratio.

Risers and fallers of the late-stage fantasy football season 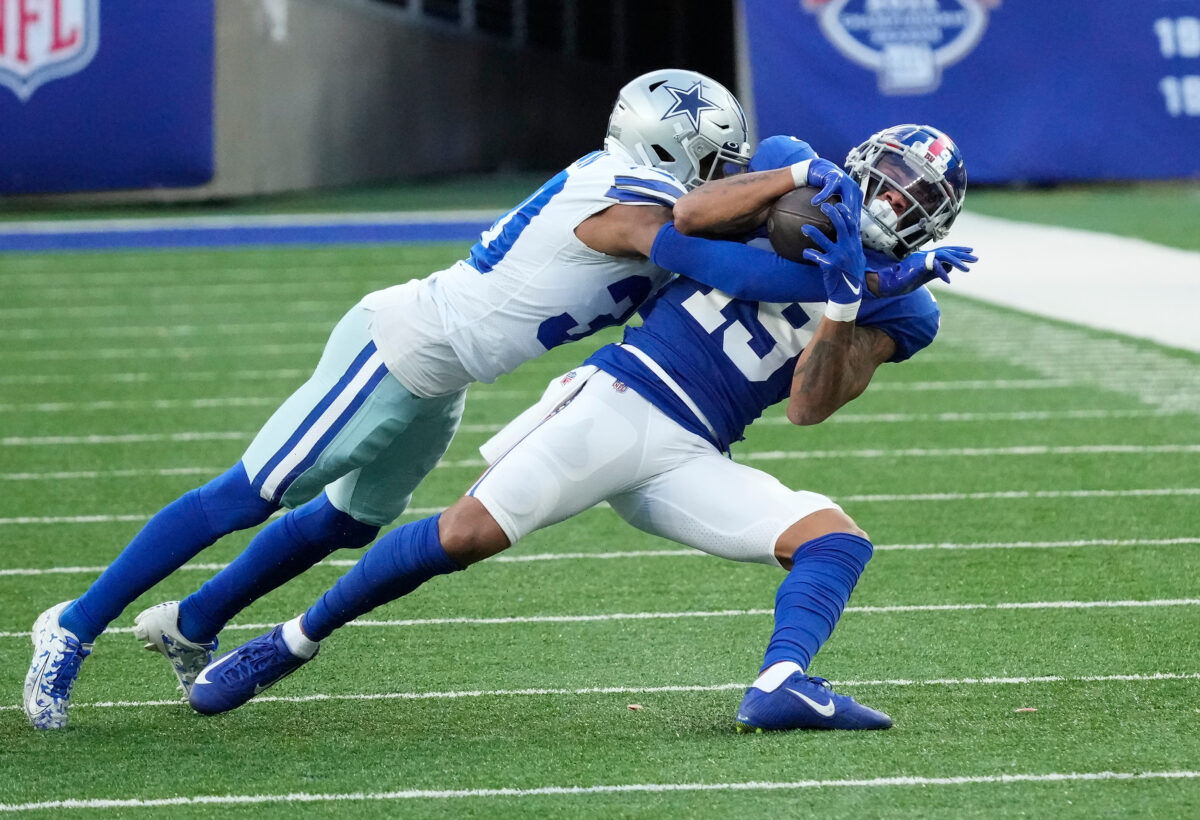 At the start of the 2021 season, I made the bold prediction that I thought all four teams in the NFC West had the potential to finish the season with winning records, which is why I was bullish on drafting fantasy players from the division. Barring the Seattle Seahawks running the table, that isn’t going to happen, but another division has stepped up to live out the big talk I had for the NFC West.

The AFC North has found itself in a situation where all four teams control their own destiny to win the division and make the playoffs in the final three games. All four teams have looked dominant at times and awful at others, but their fantasy players are all filling up playoff lineups. When you’re fighting for a fantasy championship you need to have all your players in games that mean something. It would appear every game the teams from the AFC North play from here on through are going to have playoff implications, which is all fantasy owners can ask for with titles on the line.

When the Titans lost Derrick Henry, the organization’s first idea was to dust off Adrian Peterson. After three weeks, they gave up on that theory and went to Plan B. Foreman was signed in the days after Henry went down and, over the last three games, he has looked a little like the franchise – and played like him as well. In those three games, he has rushed 54 times for 264 yards and a touchdown – topping 100 yards in two of them and scoring a TD in the other. He won’t make fantasy owners forget Henry, but he likely won’t be a journeyman after this season.

The Falcons have been an offense in transition. Future Hall of Famer Julio Jones was allowed to leave. Calvin Ridley left the team for personal issues. All-World Kyle Pitts has been up and down. The most consistent player over the last month has been Gage. He has help keep the Falcons’ dim playoff hopes alive over the last four games, catching 29 passes for 347 yards and two touchdowns. He has become a go-to flex option and still is affordable in daily play as he makes his case moving forward on a Falcons team in transition.

You don’t look to Detroit for fantasy players, especially in the playoffs, but Reynolds is making the most of his opportunity. The Lions are his fourth team in three years, and he has been little more than a practice squad live body. But with D’Andre Swift and Jamaal Williams both down, he has been thrust into the mix against a pair of good defenses (Denver and Arizona). He has responded with 37 carries for 195 yards. Like Foreman and Gage, Reynolds is making his statement to his current team and the rest of the league that he has the skills to be a factor in the NFL.

The rookie QB hasn’t been flashy and doesn’t bring a lot in the run game, but he has started putting together some solid fantasy numbers. In huge games with playoff implications against the Cleveland Browns, Tennessee Titans and Indianapolis Colts, he has thrown for seven touchdowns and, in the last two of those games, he has 310 and 299 passing yards. They aren’t the kind of numbers that have him in fantasy playoff lineups, but his stock is on the rise heading into 2022.

The time share between Ezekiel Elliott and Pollard is getting less all the time. Pollard has 119 carries to Zeke’s 201, but Pollard’s rushing average (5.7 yards) is 1.4 more than Elliott’s (4.3), and he had a better rushing average in eight of the last nine games both have played. Anyone who has Elliott isn’t going to bench him, but the Cowboys are consistently getting more yardage out of Pollard. As games increase in importance, he may be seeing even time as the Cowboys season gets more intense and impactful with each coming week.

Few players run as hot and cold as Cooper. Over the last seven games, he has played in five of them and, in those games, he has just 15 catches for 188 yards and one touchdown. An average of three catches for 37 yards over five games (technically seven) isn’t what fantasy owners bought into, and there has to be legitimate concern about continuing to play him with a fantasy season on the line.

With all the weapons Burrow has, huge numbers are expected every week. Over his last six games, he has accounted for just eight touchdowns (six passing, two rushing) and has thrown for 190 yards or less in three of his last five games. Considering that he never had fewer than two touchdowns in his first eight games and 20 TD passes in those contests, his drop-off has been pronounced. He isn’t the must-start player he was the first half of the season.

Through his first five games of the season, Williams was averaging 95 yards and scored six touchdowns, making him one of the breakthrough players of the early season. However, in his last nine games, he has more than 61 receiving yards just twice, less than 50 yards in five of them, and has scored just one touchdown. The Chargers offense has been lighting things up, but Williams hasn’t been a part of it enough to warrant staying in fantasy lineups.

It’s been the tale of two seasons for Gesicki. He is among a growing number of fantasy tight ends those of whom without one of the Big 3 are looking to step up and make a statement to be a TE that plays every week. Over his first seven games, Gesicki had three games with 85 or more receiving yards and a pair of touchdowns. Over his last seven games, he has fallen flat, registering 54 or fewer receiving yards in every game and scoring no touchdowns. Considering Miami has gone a six-game winning streak in that stretch, it has become apparent that the Dolphins don’t need Gesicki to come up big for them to win.

The fact Golladay hasn’t scored a touchdown for the Giants after signing a big free-agent contract is bad enough, but his production has completely flat-lined. In his first four games, he was productive, catching 17 passes for 282 yards. In his last seven games, he has caught just 14 passes for 195 yards and no TDs – an average of just two catches for 28 yards a game, which not only will get you benched on a fantasy team, it will get you waived.