Arizona State senior Olivia Mehaffey reached the final round at Augusta National in 2019. In 2021, she’s going back, one shot off the lead. 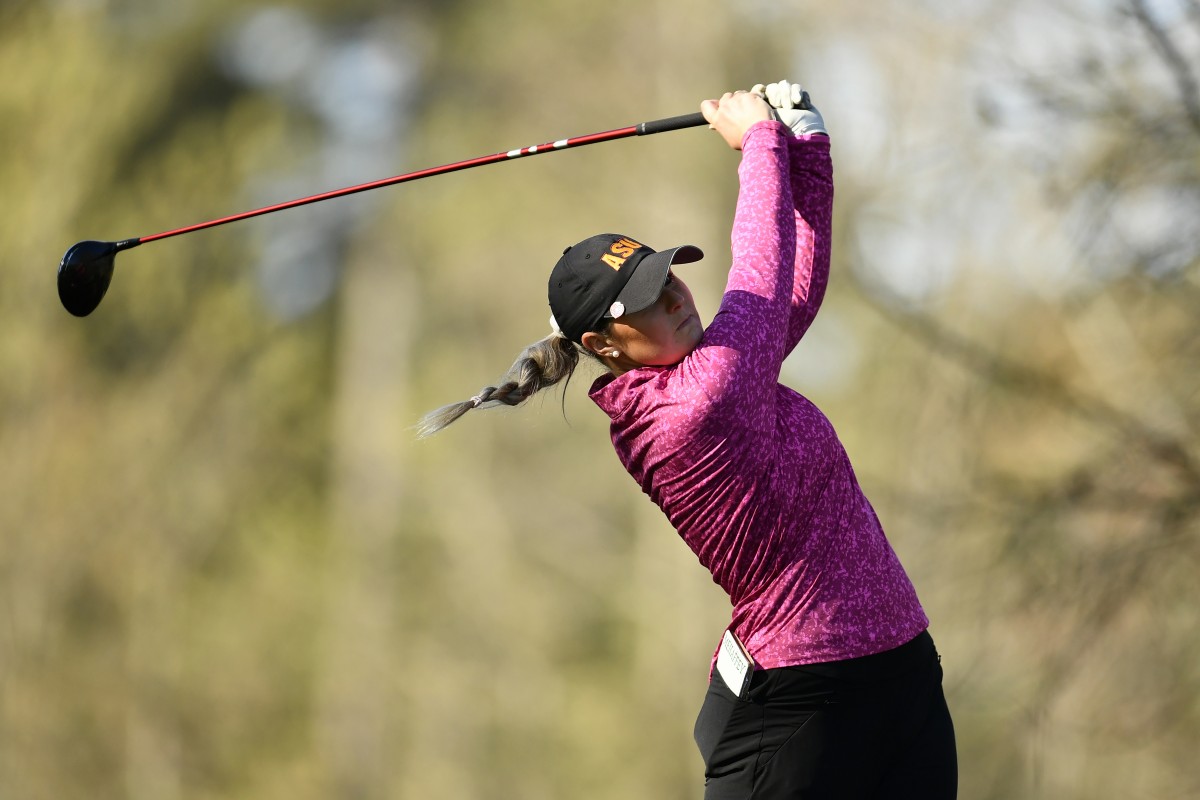 AUGUSTA, Ga. – A few months ago, Olivia Mehaffey’s swing coach, Jorge Parada, stuck a blade putter in her hand. Mehaffey had been struggling with the mallet-style putter she was using, and Parada convinced her to at least try a different style. She called him crazy, but trusted him enough to try it nonetheless.

“I just started putting with it and I loved it,” she said. “So I’ve been feeling really good with my putting recently.”

The first eight holes of Mehaffey’s second round at the Augusta National Women’s Amateur were colorful to say the least, but the red can be directly attributed to the new putter. Mehaffey didn’t make a par until she reached the ninth hole at Champions Retreat Golf Club on Thursday. She had five birdies offset by three bogeys. The thing was, nobody else was making birdies on a day when wind swirled and dried out already firm greens.

“I think that’s the hardest thing and being able to adapt and really commit,” Mehaffey said of trying to gauge the wind all day. “I was very committed out there today, and kind of committed to, if I commit and it’s the wrong decision, that’s fine.”

Mehaffey’s second-round 69 was the only number under 70 on a tough scoring day with chilly temperatures and swirling breezes. It left her tied for third, one shot off the lead.

Two years ago, Mehaffey made the 36-hole cut and competed in the final round at Augusta National, where she fired a 76 and finished T-23. Last year, she chose to compete in the ANA Inspiration, an LPGA major, instead. Because of COVID, however, the ANWA was canceled and the ANA was moved back to September. Mehaffey still played that event and finished T-74.

This week’s stage is not lost on her. Mehaffey is a four-time All American at Arizona State who came back to play a fifth year when LPGA Q-School was canceled in 2020 because of COVID. Saturday’s opportunity is enormous.

“You see what Maria and Jennifer did two years ago,” she said. “It was incredible, and it really shook the golf world. I think that’s something that we have the ability to do this week again, and that would be very special to do.”

Mehaffey has a bit of a tie to Kupcho this week. After Kupcho had her dad on the bag through the first two rounds, she opted to take a local caddie, Brian Kemp, in the final round at Augusta National. Kemp has been on Mehaffey’s bag all week. Parada helped make the connection.

Mehaffey realizes it could be a huge advantage.

“I give him my yardages in the practice round,” Mehaffey said of working with Kemp the past two days. “We’re laughing and having a good time. He’s great. We’re having fun. He helps me with putts as much as I ask, but I think when we go to Augusta National, it will be every single putt.”

Experience is huge at an event like this and Mehaffey has it in spades.

“Knowing how the event works, knowing the formalities, knowing where you go, knowing what you can do, knowing the courses — I think it’s one of those courses, the more you play, the better,” she said. “That’s why I’m very grateful this year I have an Augusta National caddie. … To utilize him out there, I think is going to be huge.”