LaMelo finally gets his wish and changes his jersey number. 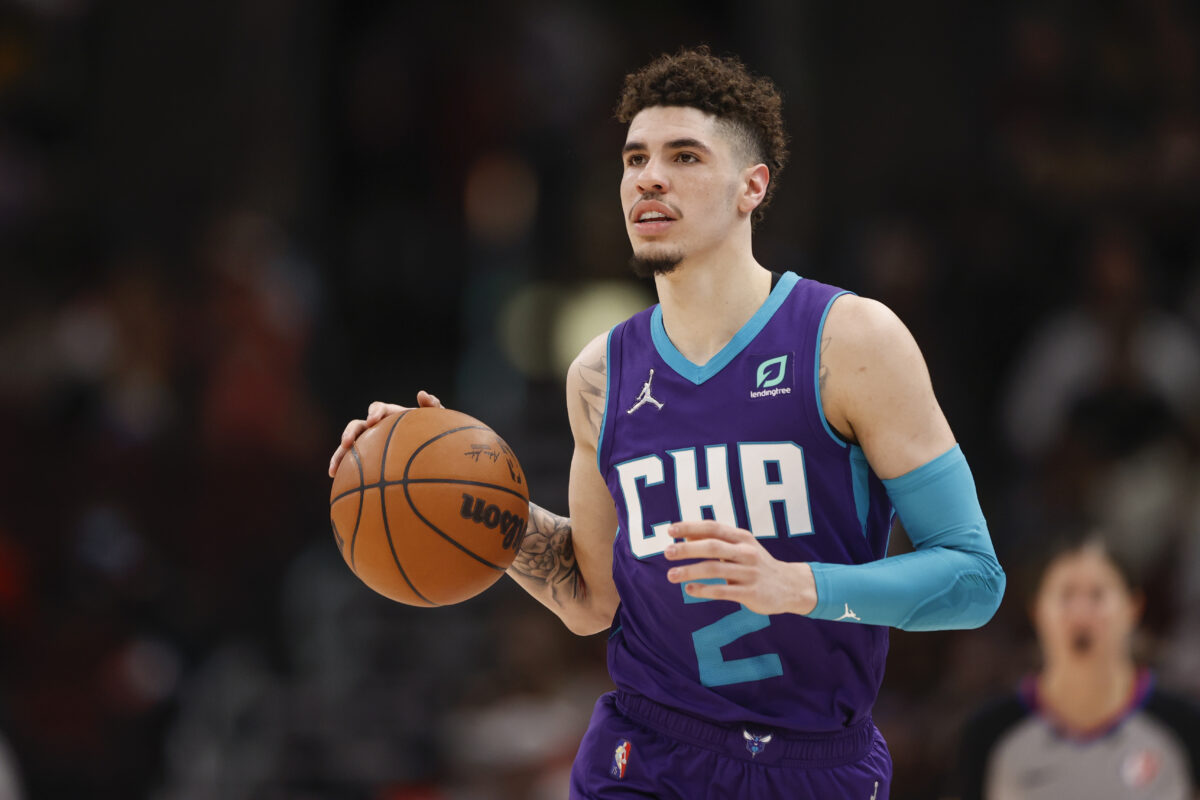 The time has finally come for LaMelo Ball.

First reported by Shams Charania of The Athletic, Ball has changed his jersey number from No. 2 to No. 1 ahead of the 2022-23 season.

Charlotte Hornets All-Star LaMelo Ball is officially changing his jersey number from No. 2 to No. 1 for next season, sources tell @TheAthletic @Stadium. pic.twitter.com/aR9GbWXqte

Ball, who wore No. 1 his entire life prior to being drafted in 2020, had to settle for No. 2 when he first joined the Hornets due to teammate Malik Monk wearing No. 1.

Last summer, Ball attempted to switch his number after the departure of Monk but missed the deadline to do so, leaving him stuck with No. 2 for one more season.

In exit interviews following this past season, LaMelo stated that he “ain’t supposed to wear No. 2 ever again” in his life.

Well, the Hornets All-Star was granted his wish. 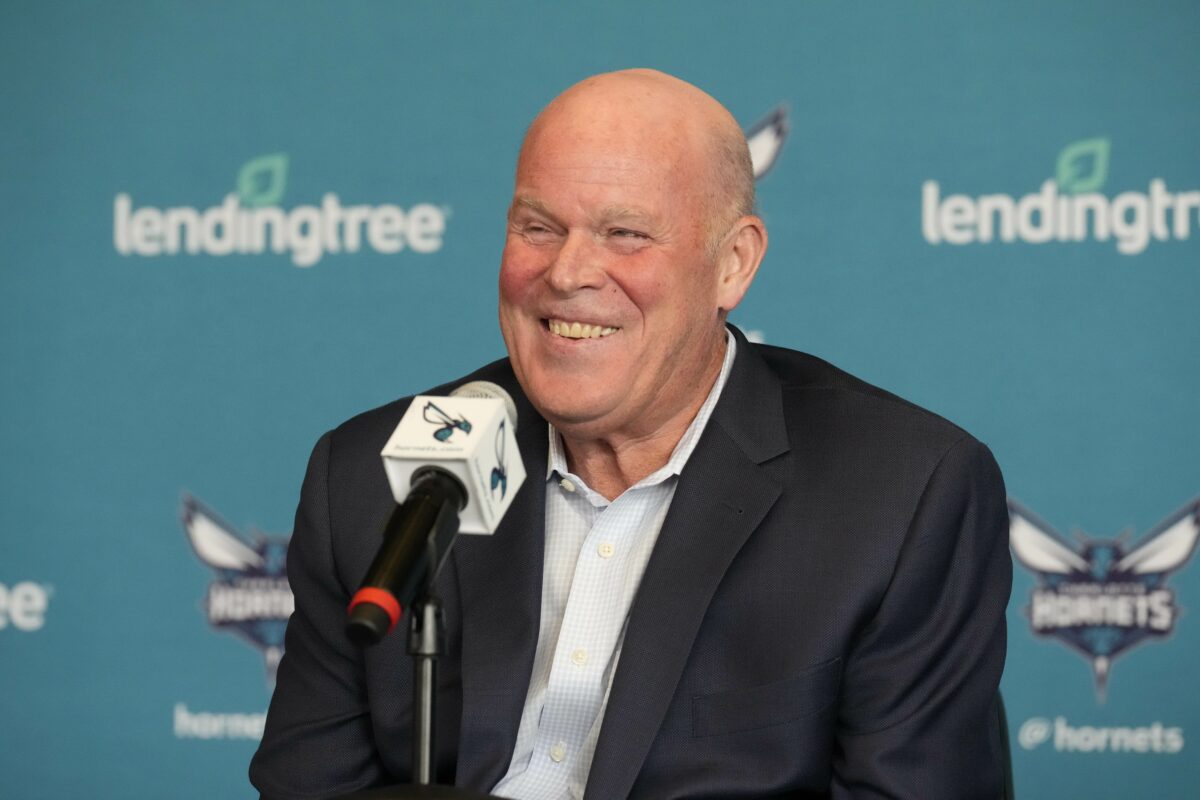 The Charlotte Hornets finally landed their next head coach in Steve Clifford, his second stint with the team.

Clifford quickly emerged as a candidate for the job after Warriors assistant Kenny Atkinson opted to return to Golden State.

In his introductory press conference on Tuesday, Clifford spoke on his offensive game plan, led by LaMelo Ball.

“Offense so much starts with playing to the strengths of your best players and he’s a great talent with a passion for the game and a flair for playing in the open court and we want to take advantage of that,” Clifford said of Ball.

Clifford noted that he plans to play with a ‘very similar emphasis’ on offense that the Hornets played with over the last few years of the James Borrego era.

Check out the full clip below.

"Offense … starts with playing to the strengths of your best players. And he's a great talent with a passion for the game and a flair for playing in the open court. We want to take advantage of that."

See where LaMelo Ball ranks among the most valuable trade assets in the NBA. 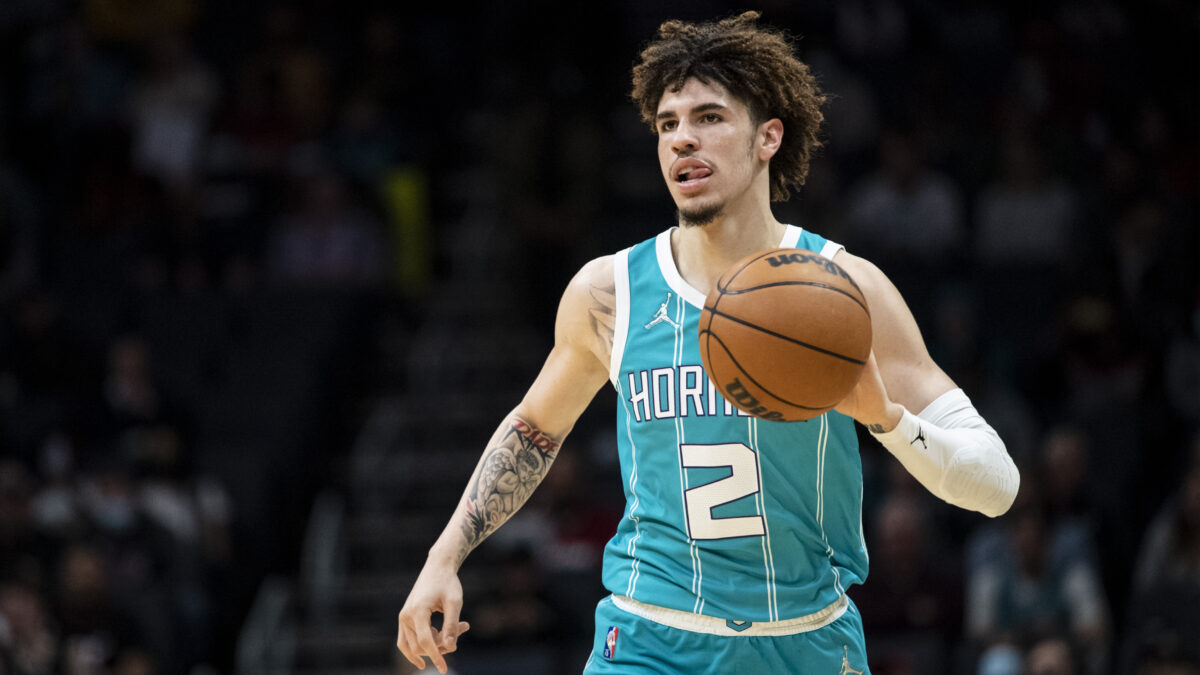 It’s already been a busy offseason for the Charlotte Hornets and we haven’t even reached the end of the NBA Finals yet.

The offseason will truly kick off next week with the NBA draft in June 23, followed by free agency and a number of presumed trades.

Speaking of trades, HoopsHype ranked every NBA player’s trade value to find which contract is the most valuable in the league. For the Hornets, their All-Star LaMelo Ball landed at No. 12 on the list of the league’s top 100.

Ball has silenced the doubters after leading a mediocre roster to two straight trips to the play-in tournament. He should slowly climb up these rankings with more consistency and some defensive improvement.

The fearless leader of Big Baller Brand is speaking his sons playing together into existence. 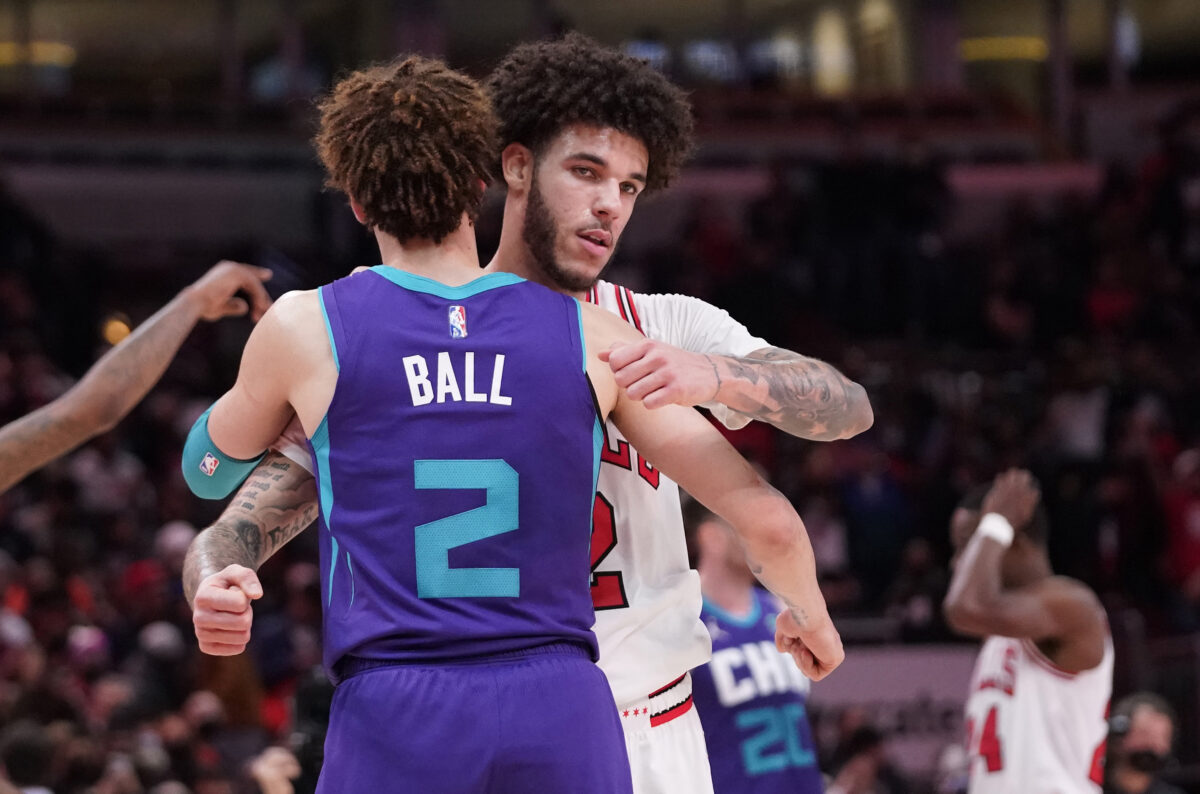 LaVar Ball the philsopher, everyone.

The father of NBA stars Lonzo and LaMelo, along with G League player LiAngelo, LaVar is hellbent on one thing: having all three of his sons play together again.

He was close to getting two as LiAngelo played for the Hornets’ G League affiliate this season, the Greensboro Swarm, but never got the call up to the big leagues to join LaMelo.

But, as David Kaplan of NBCS Chicago asked him, LaVar is confident in his boys reuniting on the same team some day.

“I’m going to speak it into existence, they are going to play together,” LaVar said. “All three of my boys — not just two. All three of three and you’re going to see a show that you’ve never seen before.”

Check out a sneak peak of the leaked images of Melo’s second signature shoe. 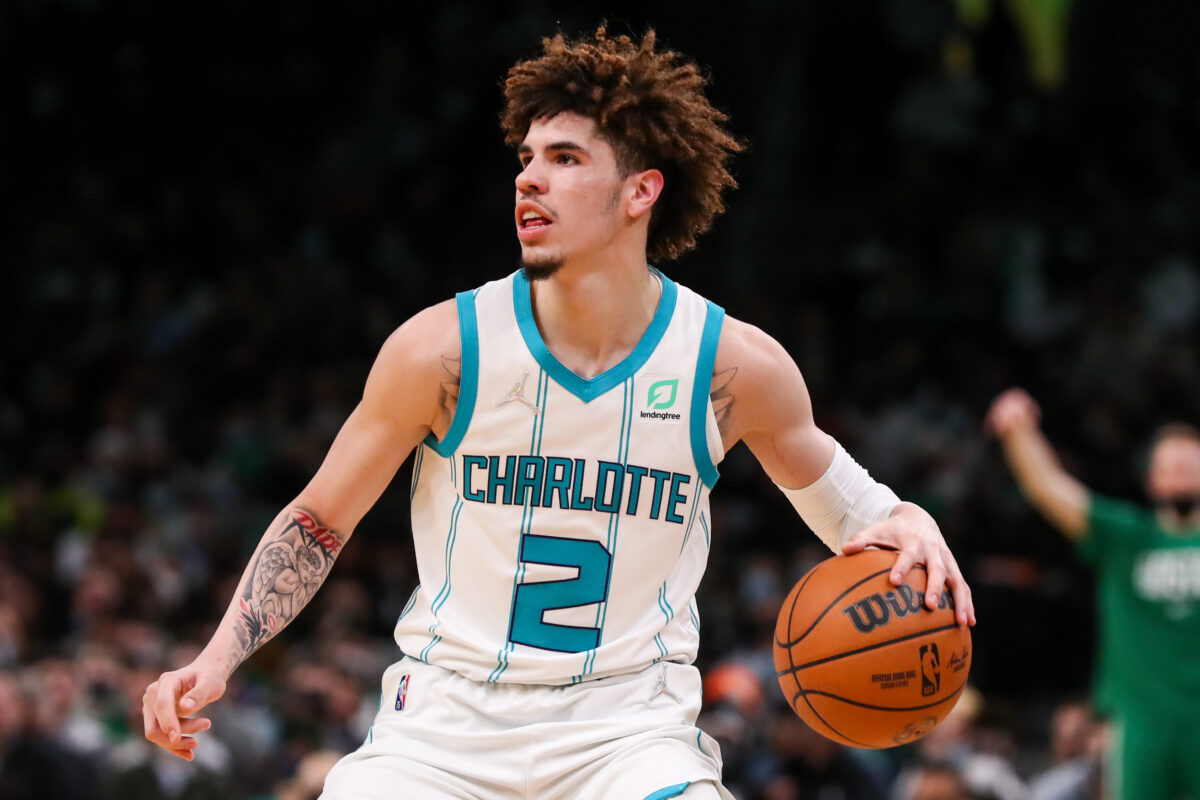 Once the 2022-23 season starts, Hornets star LaMelo Ball won’t just be rocking a new number, but a new signature shoe as well.

Ball will finally get to wear his beloved #1 next season along with the new MB.02 on his feet.

Posted by Nice Kicks on Instagram on Wednesday, we got a first look at LaMelo’s second signature shoe with Puma, the MB.02.

LaMelo recently got new flame tattoos on his hands, which resemble the design of his new signature shoe.

Stay tuned to Lonzo Wire for updates on the release of the MB.02.

Two of the three Ball brothers went head-to-head in workouts this week. 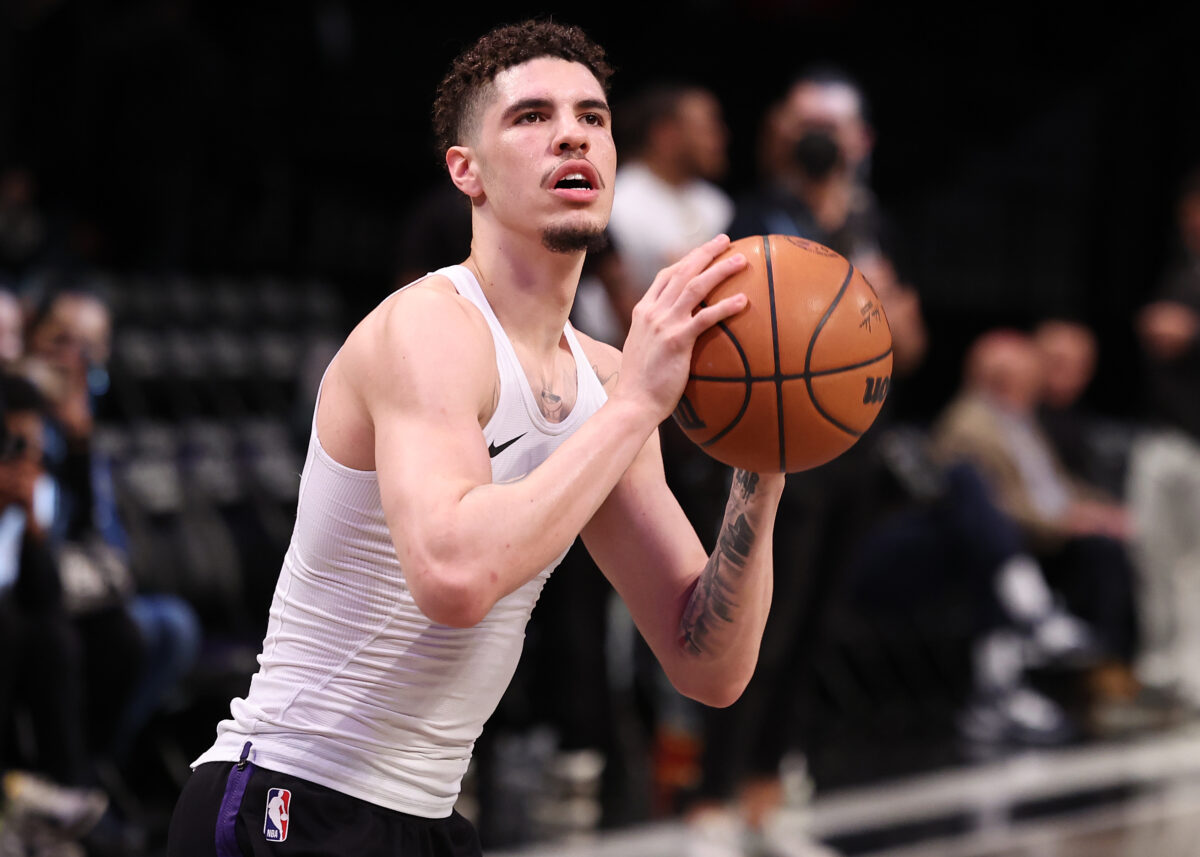 The offseason has began for the Hornets and their star is already back in the gym.

This week, Hornets star LaMelo Ball and brother LiAngelo Ball got in a workout with streetball legend and NBA skills trainer Bone Collector.

In the video, the two brothers were seen going through drills and playing two-on-two while defending each other. And we can’t forget the cameo made by LaVar Ball at the end of the Instagram post.

LaMelo is coming off a stellar sophomore season with the Hornets, where he averaged 20.1 points, 6.7 rebounds, and 7.6 assists per game.

LiAngelo played in 28 games for the Greensboro Swarm, the Hornets G League affiliate, averaging 4.6 points per game on 36% shooting from 3-point range.

Check out the video via Bone Collector’s Instagram below.

The Hall of Famer spoke about LaMelo’s future on Shannon Sharpe’s podcast.

People are always quick to wonder what a young star who plays for a small market would look like under the bright lights of a big market.

For LaMelo Ball, as ESPN’s Stephen A. Smith would say, ‘he’s box office.’ Yet, Charlotte isn’t quite considered that.

Hall of Famer Tracy McGrady appeared on Shannon Sharpe’s ‘Club Shay Shay’ podcast and spoke out his career along with today’s game.

When asked by Sharpe who would be the face of the NBA in the next 10 years out of Ja Morant, Luka Doncic, Trae Young, and LaMelo Ball, McGrady was quick to mention the Hornets young star, with a caveat.

Check out the full interview here.

LaMelo continued his growth as a star in his sophomore campaign. 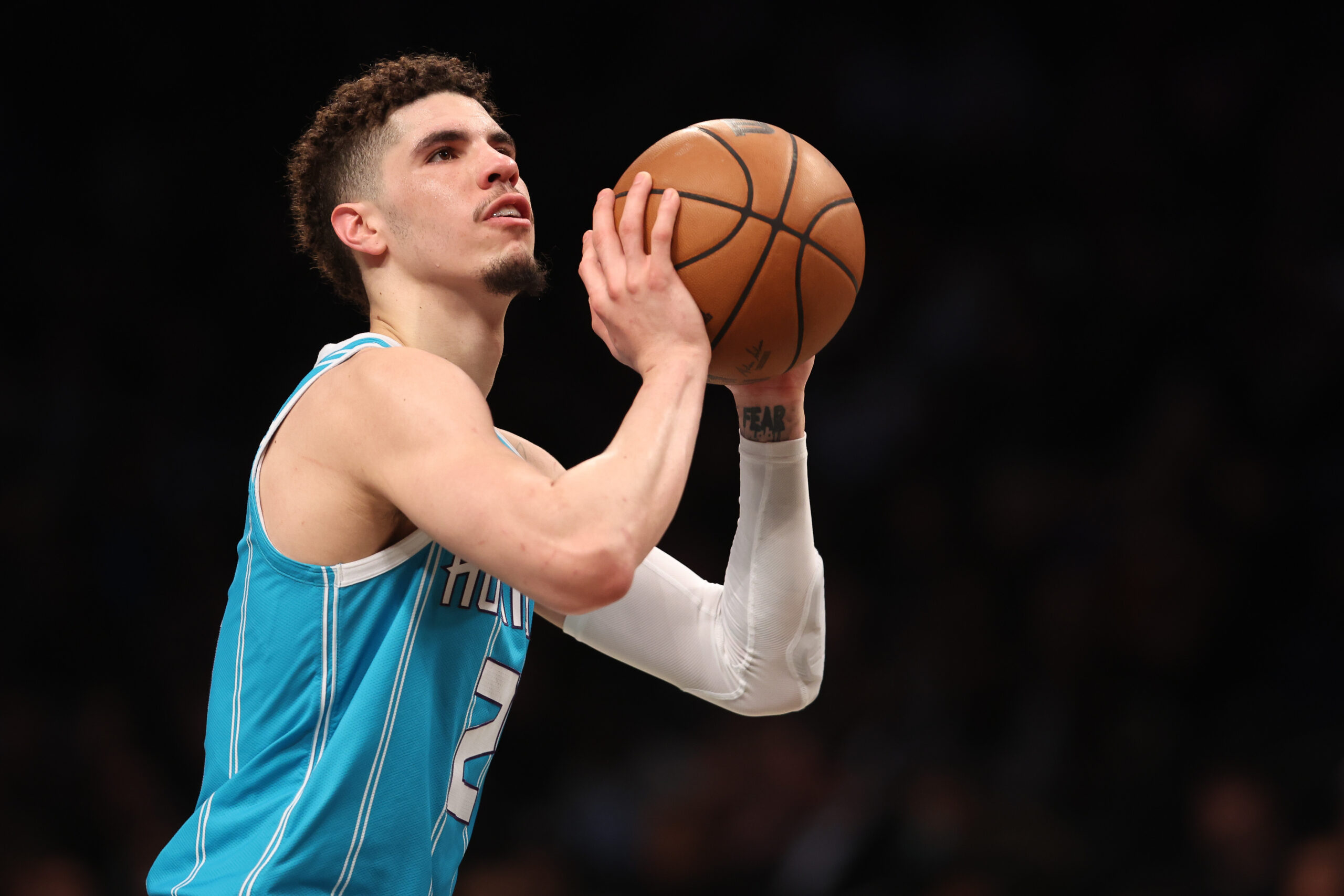 LaMelo Ball and the Charlotte Hornets both showed growth during the 2021-22 season, despite their disappointment losing in the play-in tournament for the second-straight season.

Ball led the Hornets to a 43-39 record, 10 games better than last season, while he improved across the board in all major stat categories and making his first All-Star team.

LaMelo is on the brink of superstardom in the NBA and his play on the court and personality off the court proves that, as ESPN recently ranked Ball No. 5 on their ’25 under 25′ list.

Expect to see the Hornets star wearing No. 1 next season. 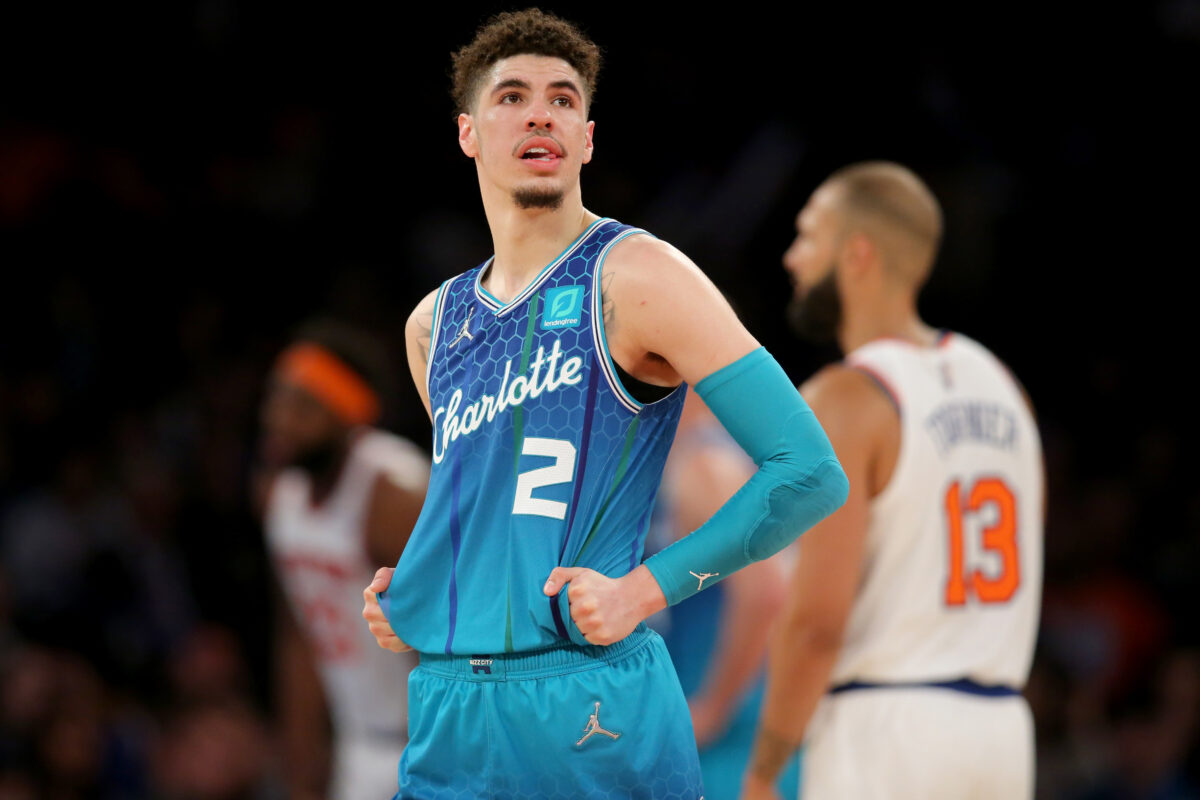 Expect to never see LaMelo Ball step on the floor sporting the No. 2 on his jersey.

Ball has been adamant since he was drafted of his desire to wear No. 1. When drafted, Malik Monk wore No. 1 and was unwilling to trade numbers.

For the 2021-22 season, Ball missed the deadline to switch numbers and was forced to wear No. 2 for a second-straight season.

But, LaMelo was clear during exit interviews following Charlotte’s loss to Atlanta in the Play-In game that he’ll be back in his beloved No. 1 next season.

Check out the clip below.

Ball remains as one of the top stars in the league after a stellar sophomore campaign. 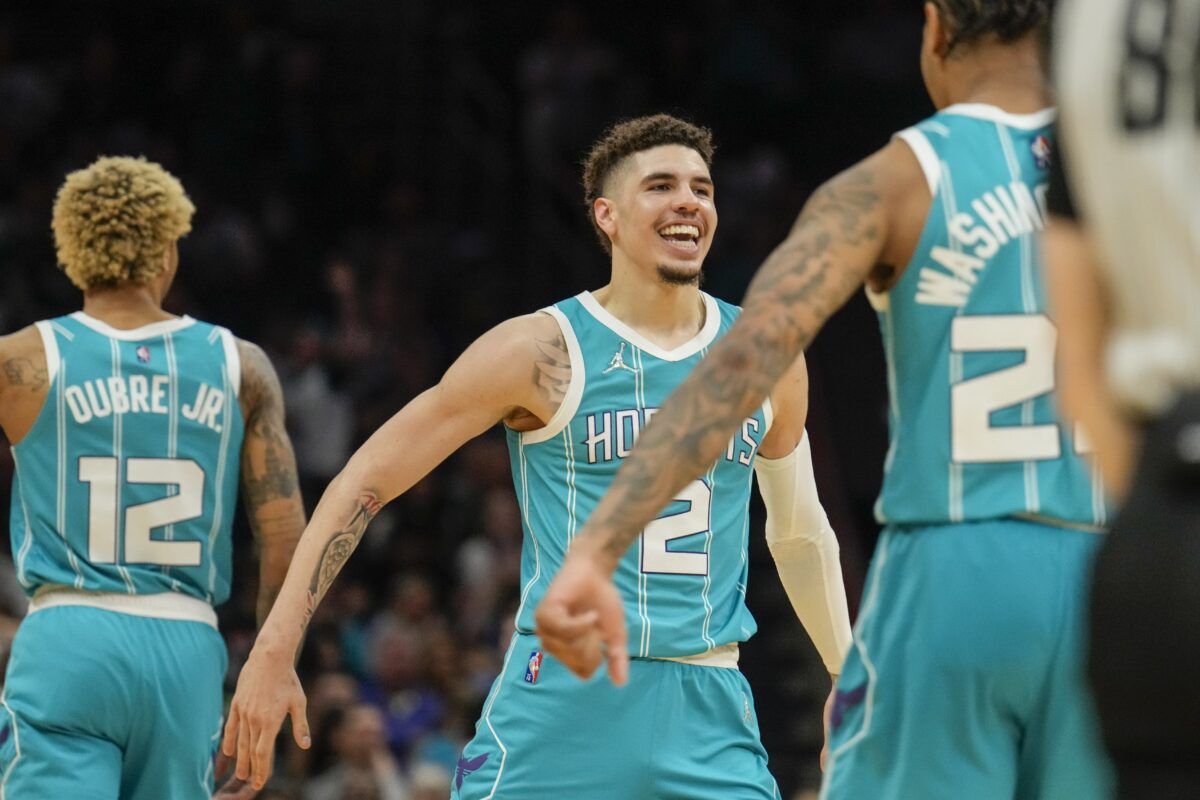 Coming off his Rookie of the Year campaign, Hornets star LaMelo Ball has continued to thrive in his sophomore season.

In ESPN’s 25 under 25 ranking, LaMelo found himself at No. 5 on the list, two spots lower than last year’s ranking.

As ESPN’s Mike Schmitz notes, Ball’s trajectory is on the incline as ‘he improved in every major statistical category’ in his second year in the league.

“Ball dropped two spots largely because of the emergence of Morant and Young as two of the league’s top point guards. Ball is still on track to develop into the potential superstar that we projected after a sensational sophomore campaign in which he improved in each major statistical category.”

“He’s already one of the NBA’s best passers, and Ball has quickly answered any pre-draft concerns about his durability — he played 75 games in 2021-22 — and shooting, as he’s the youngest player in league history to make over 200 3s while ranking third in effective FG% on above-the-break 3s.”

With Ball and the Hornets playing in the play-in tournament for the second-straight year, clinching a playoff spot this season would be the next step needed for LaMelo to become a superstar in this league.