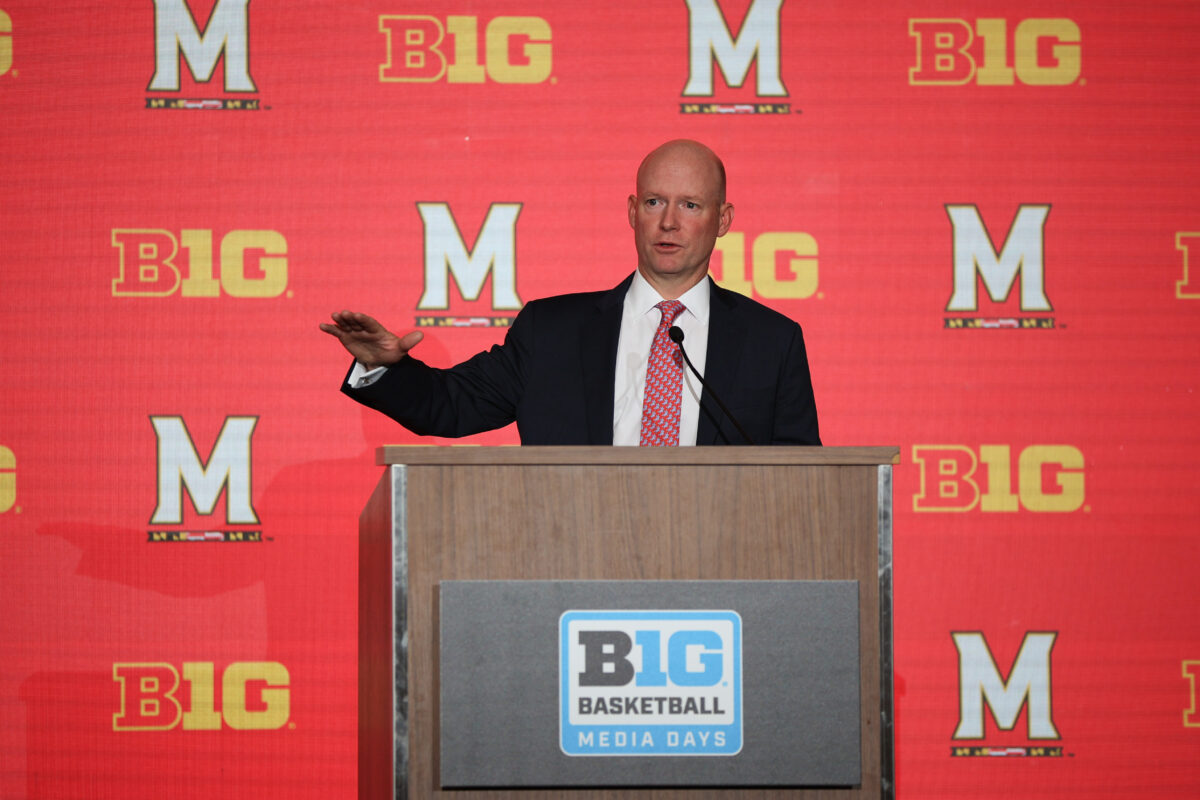 With the start of the college basketball season quickly approaching, Kevin Willard is preparing for his 15th season as a college head coach. However, the Huntington, N.Y. native is entering unfamiliar territory after joining Maryland following a 12-year stint at Seton Hall. While Willard is still adjusting to a new program, he is excited about the future.

It is a future with a Big Ten program that, while going through some downtime the past few seasons, is historically and traditionally a powerhouse in college basketball.

“There is an enormous sense of pride within the state of Maryland, within the fan base, within the residents, Baltimore County, city of Baltimore,” Willard said this week during Big Ten Media Days.

“I knew the tradition, coach Williams (former Maryland head coach Gary Williams) has been great helping me get around all the places, but the sense of pride that they have for their program is really cool. It’s been something I think that’s helped us recruiting, it’s helped us with this team this year. It’s been great.”

As Willard looks to make his mark on the Terrapins program, he is surrounded by talent. Maryland is known as a basketball state, but its newest head coach isn’t focusing on just players from Maryland. He is looking for players that fit the Terrapins’ culture.

The idea of fencing in Maryland is one that he says isn’t realistic or feasible.

“They’re all going to transfer eventually anyways with the transfer portal. We’re trying to build the right type of kids. It’s a great area. High school basketball, AAU basketball in the DMV is by far second to none. It’s kind of cool being there because you get first dibs on a lot of kids that obviously we couldn’t get before.”

While the 47-year-old Willard is starting a new chapter in his career, he brings an impressive resume to College Park. During his final seven seasons at Seton Hall, the Pirates made the NCAA tournament five times. They never finished lower than fifth in the Big East Conference in that span.

As Willard looks to build on that success in Maryland, he is inheriting a program that finished last season with a 15-17 record. In Big Ten play, they went 7-13. Despite their struggles, the 2016 Big East Co-Coach of the year has already been impressed by the passion that he has seen for Maryland basketball. 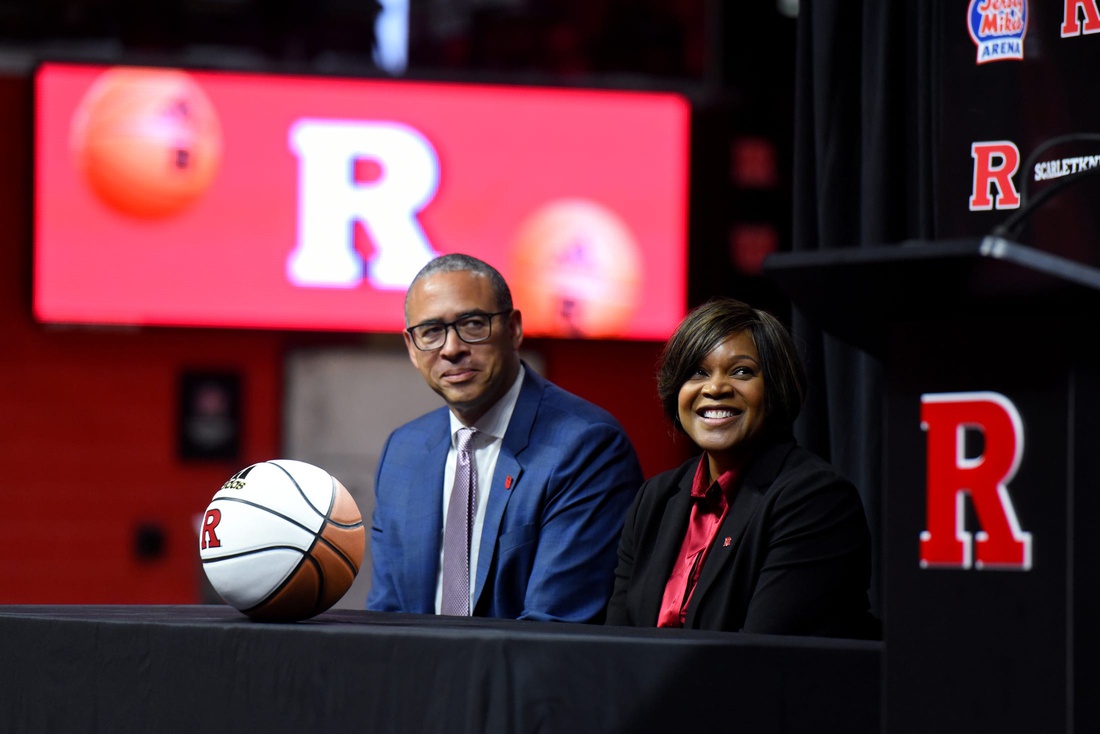 Rutgers women’s basketball season may not start until November, but the recruiting efforts don’t have an offseason. The Scarlet Knights landed a class of 2022 commit in the form of point guard Jillian Huerter.

The 2022 Shenendehowa High School grad took to social media to make her announcement, sharing her excitement to commit to the program. She is currently playing for the Kent prep school. Her recruiting profile took a small hit due to pandemic-impacted seasons, and she spent the early part of her senior season rehabbing from a torn meniscus. The Saratoga County native fills an immediate need for the Scarlet Knights as many of the guards from last season’s squad have either graduated or transferred.

Always been scarlet, now it’s time to be a knight…Excited to announce my commitment to Rutgers University ❤️🛡️ pic.twitter.com/cLSGAXBSwH

Huerter is no stranger to high level basketball as her family is basketball royalty in Saratoga. Her father Tom and brother Tom Jr. both played Division I at Siena College, while her older sister is currently playing for Providence College heading into her sophomore season.

Let’s not forget about older brother Kevin who is currently in the NBA, signed with the Sacramento Kings and previously played for the Atlanta Hawks.

Back in May, she spoke to local media about how life was growing up with so many high level basketball players:

“We had a lot of two on two games growing up. Now we’ll probably do more shooting competitions but we keep the competitiveness up with other games. We play a lot of cards or just anything we can do to compete with each other.”

Rutgers women’s team struggled last season to a 11-20 record – a steep drop off from a strong 2020-2021 campaign where they finished 14-5. Under the guidance of new head coach, Coquese Washington, they are looking to rebuild the program into a Big Ten power. Washington’s history of winning in the Big Ten with Penn State should pair perfectly with someone with the acumen and basketball family such as Huerter. 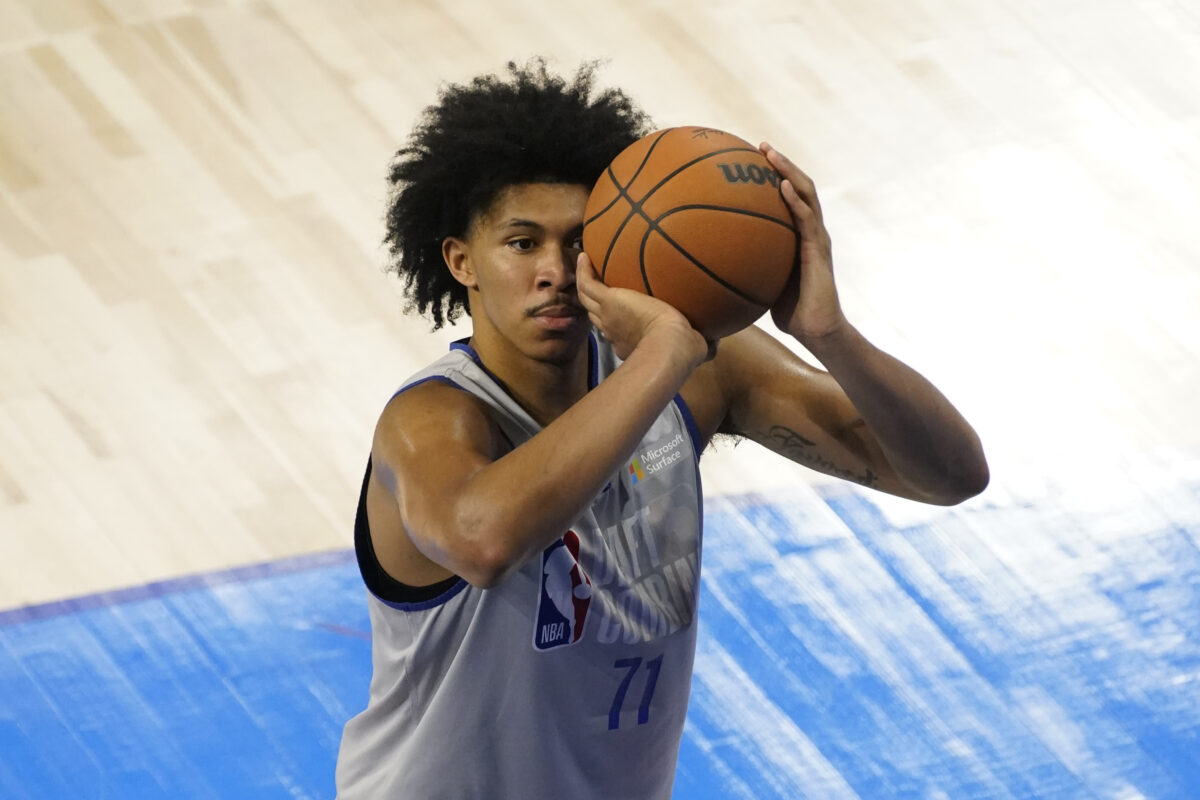 The 2022 NBA summer league in Las Vegas wrapped up this past weekend. It was a great showcase for some of the league’s top future talent. The Las Vegas portion was an 11 day event, featuring all 30 teams playing five games a piece.

There was some strong competition throughout the week and a half, and the Portland Trail Blazers took home the Summer League title when it was all said and done. There were a ton of former Big Ten players involved in the proceedings, including former Scarlet Knight and pillar of the program, Ron Harper Jr.

Like Harper, many of those young NBA prospects actually participated in Big Ten play just last year – including several high draft picks. Let’s take a look at the performances of the rookies from the Big Ten in NBA Summer League.

How will E.J. Lidell do in the NBA? 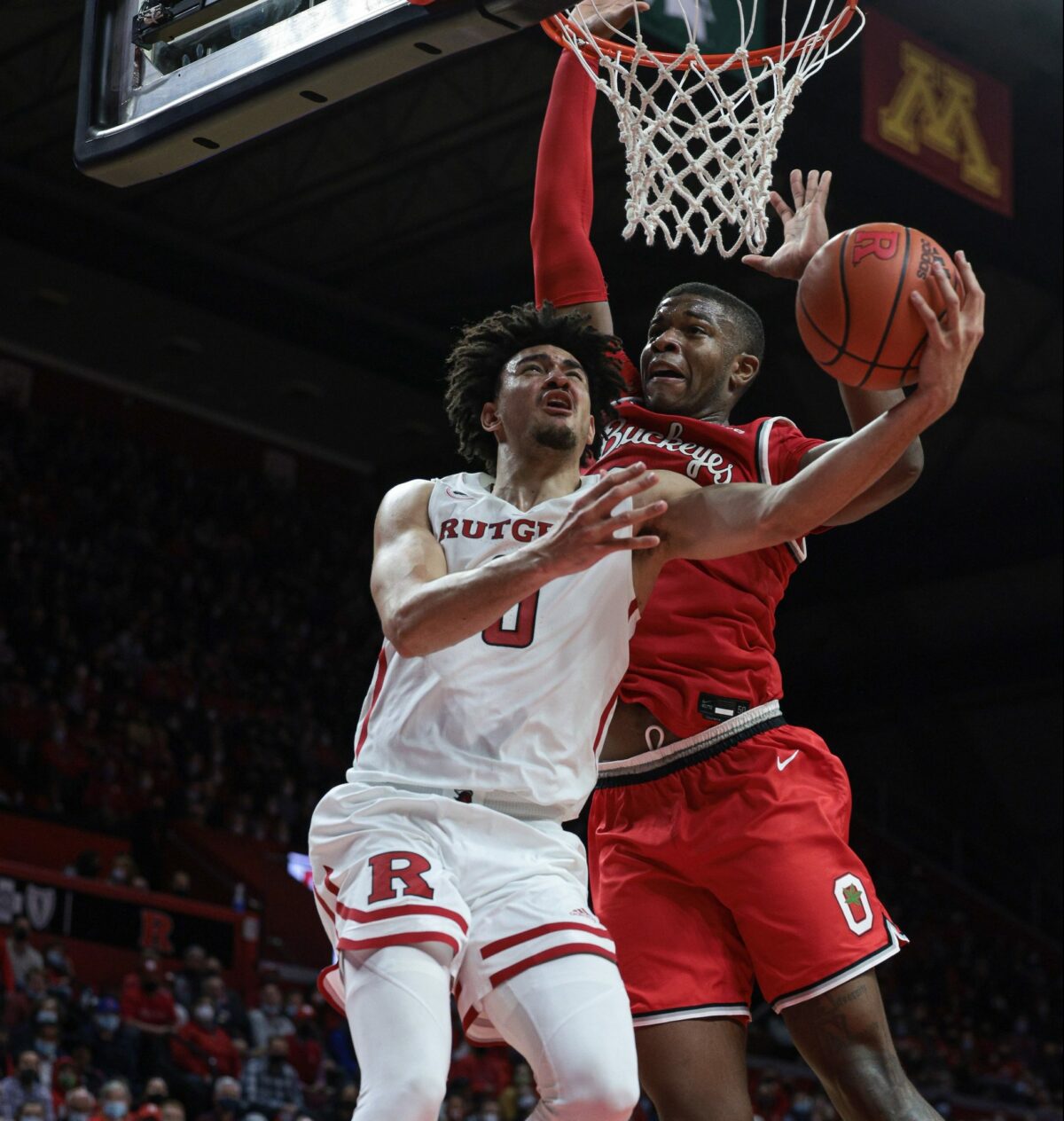 Last month, E.J. Liddell slid to the second round of the NBA draft. It was a bit of a surprise given that during his final season of college basketball, the Ohio State standout was projected as a top 20 pick.

Last season as a junior at Ohio State, Lidell was one of the best players in a tough and balanced Big Ten. He averaged 19.4 points and 17.9 points per game this past season.

So to see Liddell go No. 41 overall to the New Orleans Pelicans was a bit of a surprise. The 6-foot-7 forward shot 49 percent from the floor last year.

Former NBA scout Michael VandeGarde weighed in on why Liddell dropped out of the first round as well as his fit with the Pelicans.

“I think it is a good pick and spot for him…They are growing and looking to develop players and he needs that,” VandeGarde said.

“As a second-round guy he will have to prove he is an NBA player over the next few years. Not sure how his career will play out; he has the potential to be a 10-year guy in the NBA or out of the league in three to four. Time will tell.”

VandeGarde is a former NBA scout, having spent 18 seasons with the Philadelphia 76ers. He is currently involved with the innovative digital platform CoachTube, a portal that offers sports coaching courses from legendary coaches in the NFL, NBA and college sports.

The former NBA scout also discussed the transition of former Rutgers star Ron Harper Jr. as well as why Lidell dropped to the second round. 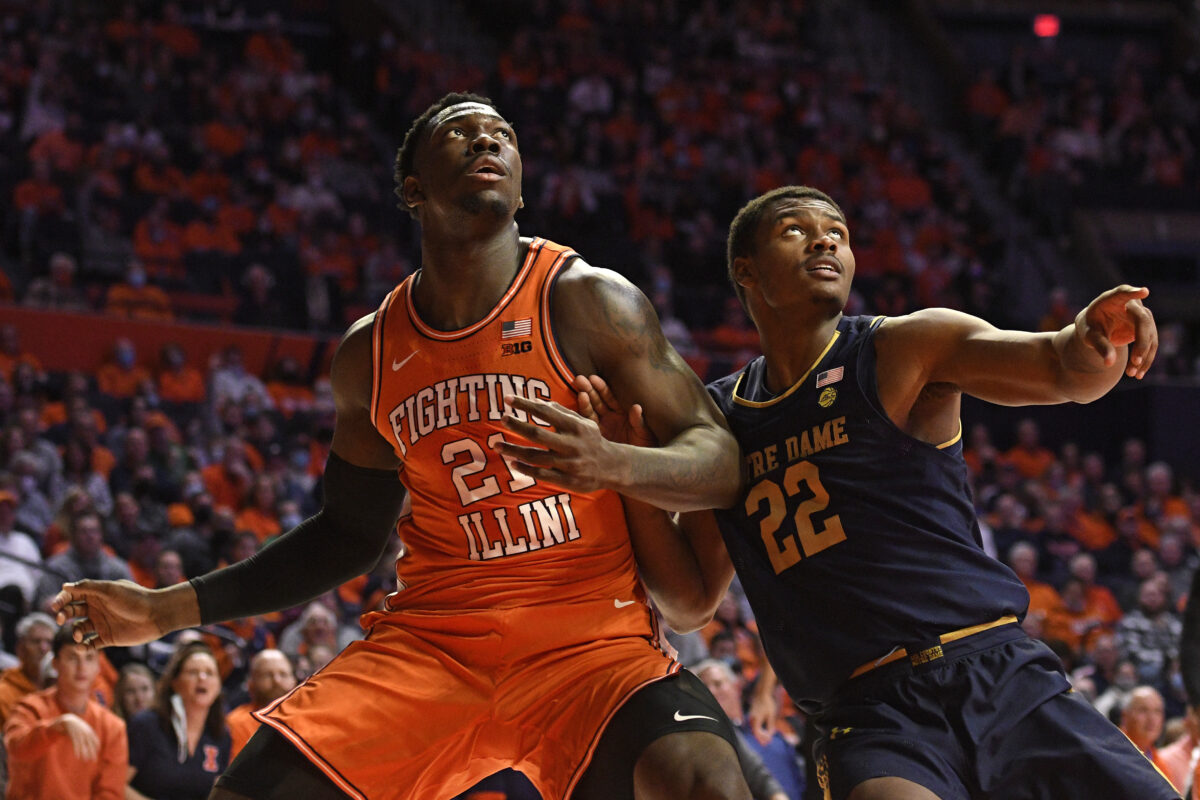 The Big Ten had a strong showing in Thursday’s NBA draft, with a total of nine selections. A number of top Big Ten players also were signed after the draft, headlined by an Illinois star and a playmaker from Rutgers.

It was a surprise to see several Big Ten stars such as Kofi Cockburn (Illinois) and Ron Harper Jr. (Rutgers) not get selected. Harper, for example, was frequently mocked before the draft as being a second round pick.

Both players signed as free agents after the draft. More on that shortly.

As for those who were drafted, the Big Ten had four first round picks. A look at the nine draft selections:

Check out some of the Big Ten stars who signed as undrafted rookies following this week’s NBA draft!

The ACC and the Big Ten will battle it out again on the hardcourt this season in the Men’s Basketball 2022 ACC/Big Ten Challenge. 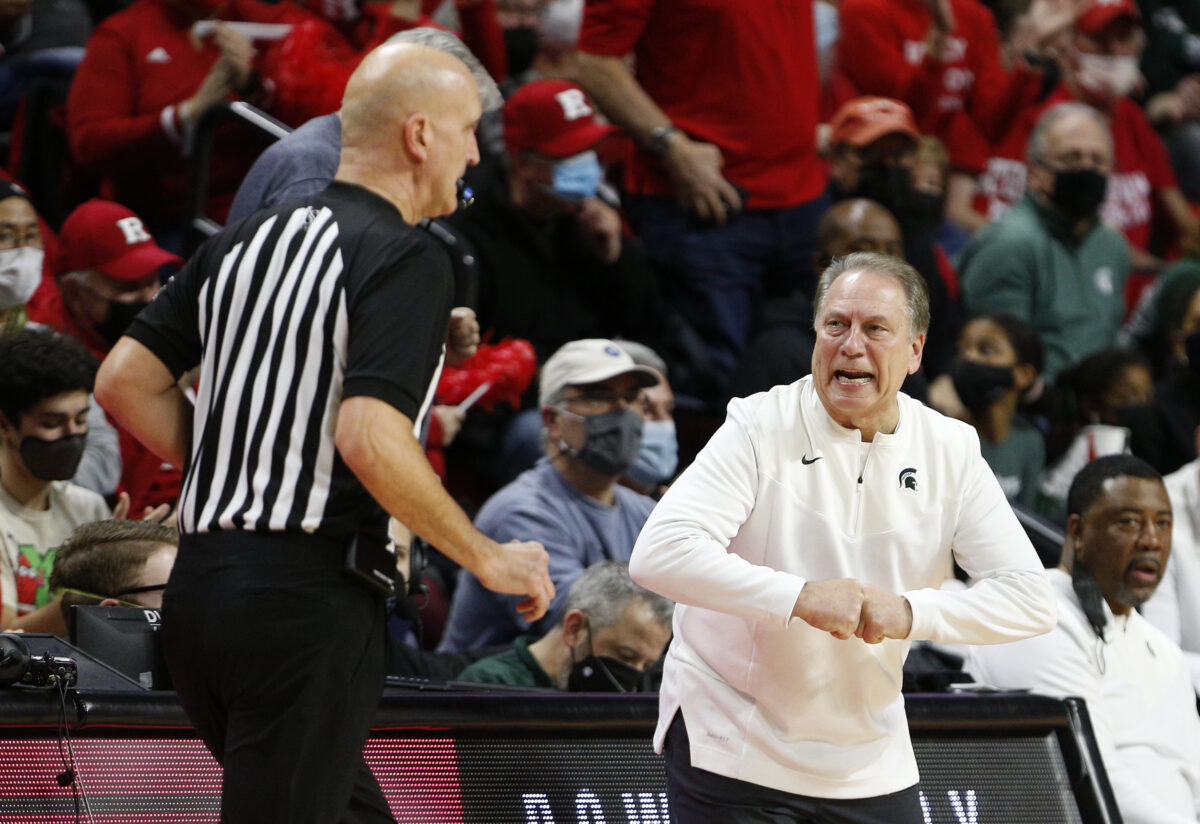 Two of the best conferences in men’s college basketball will face off again this year, with Friday’s announcement of the schedule for the ACC/Big Ten’s Men’s Basketball Challenge.

Last season, the Big Ten took eight of the tournament’s 14 games against the ACC.

Last year, the Final Four featured two ACC teams and none from the Big Ten. The 2021 Final Four did not feature a single team from either the ACC or the Big Ten.

The Terrapins joined the Big Ten in 2014.

Take a look at what the schedule is for the ACC/Big Ten’s Basketball schedule this season!

Here’s a look at all the Big Ten basketball players that heard their names called during the exciting night that was the 2022 NBA draft. 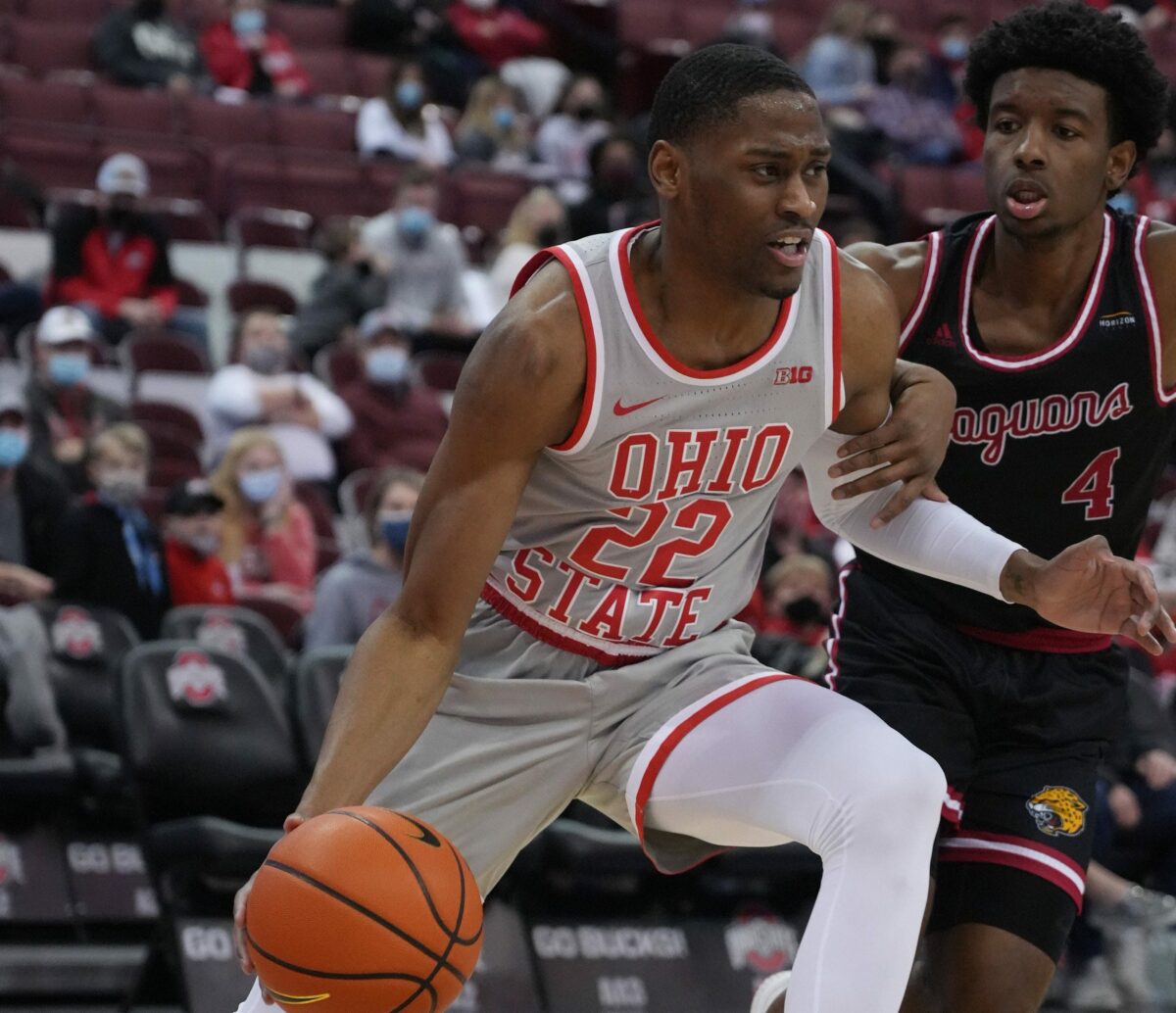 It’s finally here and gone, basketball fans. The 2022 NBA draft wrapped up last night, and now it’s time to reflect on what went down.

Unfortunately, Rutgers’ forward Ron Harper Jr. went undrafted despite the hopes and prayers of many fans of the Scarlet Knights. However, several Big Ten standouts had the pleasure of hearing commissioner Adam Silver call their name on Thursday night.

The Big Ten finished tied for the lead across all conferences with nine overall selections. The SEC also finished with nine, and the ACC were just behind them both with seven selections. Iowa kicked off the conference action early with power forward Keegan Murray being drafted fourth by the Sacramento Kings.

Here’s a look at all the Big Ten basketball players that heard their names called during the exciting night that was the 2022 NBA draft.