All Winter and Spring NCAA Championships were canceled this year. Affected athletes need another chance to compete at the collegiate level. 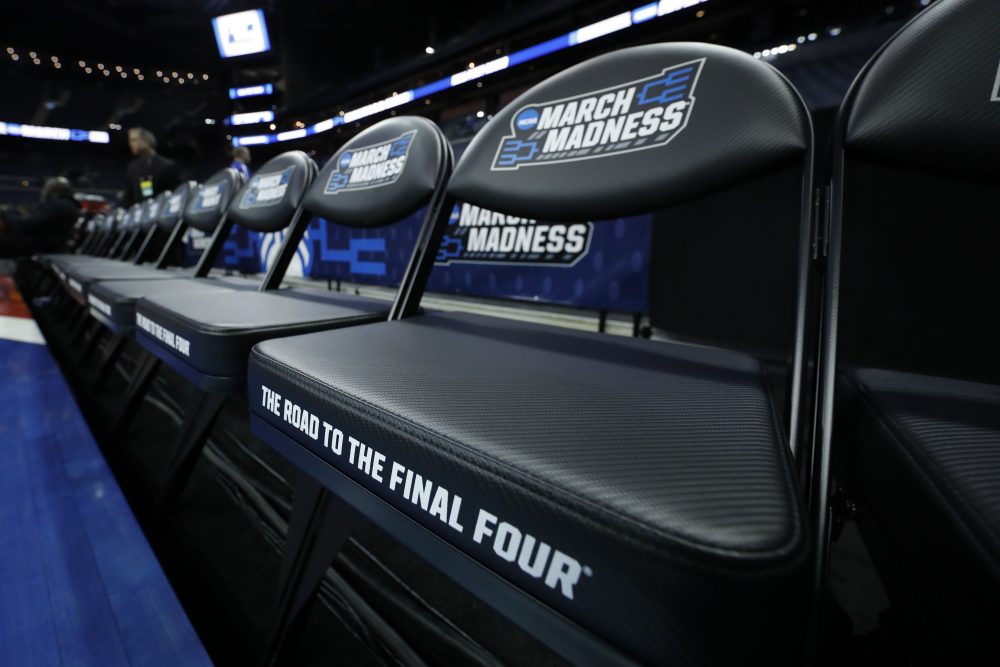 A huge issue for the NCAA right now is that it has to determine how to deal with the affected student-athletes. Fortunately for the NCAA, there is only one right answer: Give everyone an extra year of eligibility.

This should be obvious. Most spring athletes competed in a few games, at most. Taking away a year of eligibility for that would be a gross disservice.

Of course, even easy answers have costs. USAToday ran an article on Sunday detailing the financial implications of giving an extra year of scholarships. It’s not simple, for a lot of schools. However, granting an extra year of eligibility doesn’t necessarily mean forcing the schools to give a scholarship. That can be up to schools and students to work out among themselves. Plenty of graduating seniors will be moving on to other places in life and won’t be playing–and that’s fine. The point is that they should keep the opportunity to play if they want.

Here rises the conundrum. Almost no winter sports–none at the D1 level–finished their respective championships. However, the seasons did end for many D1 winter athletes. Basketball conference tournaments were completed–and while we didn’t have selections yet for them most schools knew their seasons were done. Wrestling and fencing had held their NCAA qualifiers already. Swimming and Track finished their conference tournaments. Student-athletes got to finish out their seasons, and it was only a select few that were denied a chance to compete for a championship.

However, those select few are important. College athletes each get a maximum four chances to compete for a championship. Those four opportunities should be treated as sacred, and taking one away would be a travesty. Things like injuries or academic issues happen, but a global pandemic had nothing to do with the athletes. It’s not fair to teams and fans to cancel championships (though it was certainly necessary), but it’s definitely not fair to the athletes themselves, and we have to make that up to them.

Also, the fact that most of the season was played already shouldn’t matter. Every athlete in a winter and spring sport, in theory (excluding schools with postseason bans), starts the season with an equal chance. The fact that some athletes did better during the season than others shouldn’t hurt anyone.

Why not only give an extra year of eligibility to those who qualified for the postseason? Well, that wouldn’t be fair to other schools. If only the best teams got to keep their players for an extra year, then the weaker teams from this year are at a further disadvantage. It just wouldn’t be fair to let only the top athletes compete again. Therefore, since the only fair thing is to give the qualified athletes another chance, we have to give the same chance to everyone.

Again, this means everyone. Not just seniors. Athletes only get four chances at an NCAA Championship, and they deserve all four. It does not matter whether the lost one is the last one, the first one, or somewhere in between. Everyone lost a chance, so everyone should get an extra one.

The next issue to deal with, at the Division I level, is scholarship limits. Every sport has a limit on how many scholarship players each school can have on a roster. We can’t just grant every 2019-2020 winter athlete a redshirt, because that will squeeze down the roster for everyone coming in this coming year.

Instead, what the NCAA has to do is just not count everyone who was on a roster this year. They get an extra year of eligibility, they get a scholarship if the school chooses, and they don’t count towards scholarship totals regardless.

This mean that for up to the next four years, every school could have more players on scholarship than current scholarship limits allow. And that’s fine. It doesn’t squeeze out incoming freshmen and it won’t seriously impact scholarship sports moving forward.

I do have to acknowledge one downside to this plan. Those with many freshmen on rosters would essentially get an above-average free scholarship spot. It would be a (small, but definite) advantage over schools that have more seniors on their rosters currently. To fix this, potentially, the NCAA could consider phasing in scholarship restrictions after next season on those schools who have too many non-counters.

Even without that last point, though, the inequity created by having too many freshmen this season is far outweighed by the basic issue of this lost season.

Everyone deserves all four of their shots at a championship. And this is the only way to give that back.

What should Ohio State football fans root for this weekend? Let’s break it all down, from the SEC to the Pac 12. 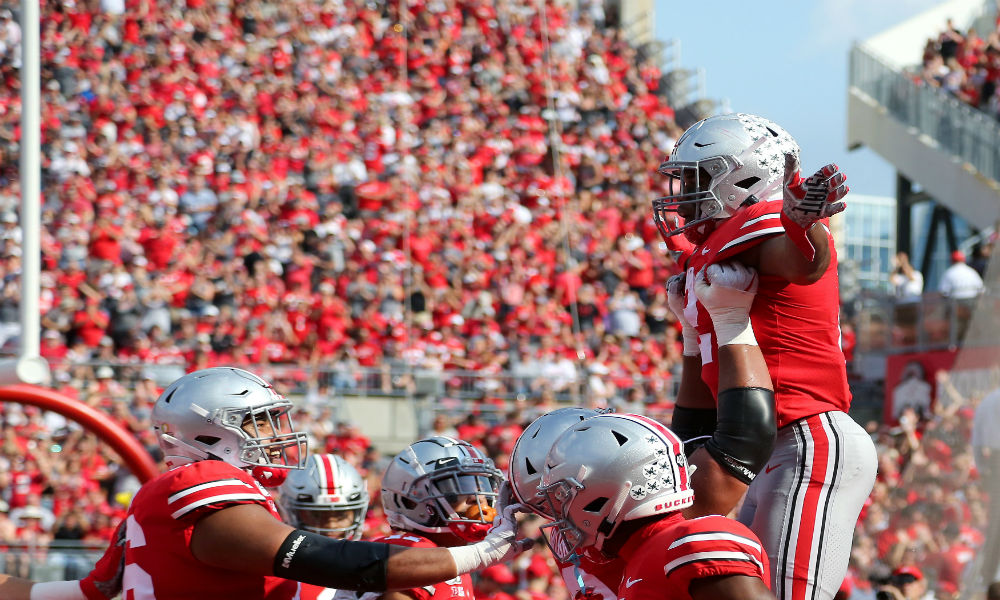 Before we get into our third-to-last Rooting Interests of the season, we have to point out exactly what scenarios we are dealing with. With so few weeks left in the season, we can be more precise about the scenarios we’re pinning down. For example, Ohio State has no reason to care if it loses the Michigan game (unless the Buckeyes also lose a second game). Go 12-1 with a Big Ten title and a loss to Michigan, and the Buckeyes are in. So there’s no need to discuss that. Therefore, when looking an Ohio State’s potential rooting interests this week, recognize that we’re looking at what keeps the Buckeyes in the Playoff if they lose to either Penn State, or against Minnesota or Wisconsin in the Big Ten Championship Game.

So, with that conversation out of the way, let’s look at the games. Miami of Ohio’s win over Akron was awful, and probably hurt Ohio State in some of the fancier SOS metrics. That shouldn’t matter much. Nor should Georgia Tech’s win over N.C. State, though it does make Clemson’s weak resume even worse.

As we get to the weekend, don’t bother looking at the SEC games. This is the penultimate week of the regular season, which is now officially called SEC Cupcake Week (trademark pending). The SEC West teams face opponents like Western Carolina, Samford, Abilene Christian, and Arkansas. Texas A&M beating Georgia won’t hurt the Buckeyes, but it does also help Alabama’s resume a bit. Missouri taking out Tennessee won’t mean much, but it would lock Alabama into beating a maximum of two P5 teams with winning records.

If Ohio State wants to stay ahead of Oklahoma (or Baylor, but I think that’s locked in already), root for the Big 12’s overall profile to look weaker. That means West Virginia upsetting Oklahoma State, and Kansas taking out Iowa State if possible. Kansas State losing to Texas Tech probably helps as well. And, of course, either Oklahoma or Baylor losing would go a long way to making this conversation moot; both losing would end the Big 12’s Playoff hopes.

In the ACC, it’s better if Pitt beats Virginia Tech, because that would strengthen Penn State’s overall profile. Virginia losing to Liberty seems unlikely, but would further weaken Clemson’s resume if Virginia reaches the ACC Championship Game by winning next week. Syracuse beating Louisville and Duke beating Wake Forest would also hurt Clemson’s resume. Any gain that Alabama might get from a Duke win is easily offset by what Clemson loses. Then again, Clemson is very likely going 13-0, so it might be too late to root against its resume.

And, of course, there is the Pac 12 to discuss. Washington and USC losing will wipe at any chance of multiple ranked wins by the Pac 12 champion, but at this point it looks like the Buckeyes might need a loss by either Utah or Oregon (or both) to feel safe about staying in front of a Pac 12 champion.

At night, Cincinnati gets a national spotlight against Temple. The Bearcats have really struggled the past few weeks, and they need to impress if they want their ranking to move back up. Also in the AAC, it’s probably a little better if SMU beats Navy, but that doesn’t matter too much. Lastly, keep an eye on Conference-USA. FAU should have no trouble with UTSA, but if the Buckeyes want three nonconference opponents that win their conferences (or divisions), Marshall has to lose a game. That means either this week at Charlotte or next week at home against FIU. Neither of those upsets is impossible, but they are upsets.

Next… Who to root for in Big Ten games

With the CFP selection committee coming out with new rankings Tuesday night, let’s look ahead to what they might say on certain issues.

Usually I can use this space to highlight a few questions the committee can answer with its rankings. We can use them to determine how the committee judges SOS, what it values, etc. Last week, for example, I pointed out that what the committee seems to value most this year is whether a team blows bad teams out or not. And, certainly, it will be important to see if that trend stands.

As always, I am sure that we’ll have plenty to glean from the committee’s rankings. However, the odd trajectory of this season means that we won’t be able to look forward to anything before we see the rankings.

How does the committee value real quality wins? Well, other than LSU and Ohio State, no team has more than one top quality win. Teams like Penn State, Georgia, and Michigan have two good wins, but no one has a real collection there.

As I pointed out in CFP Implications this week, there are 17 teams that have basically locked themselves into the top positions this year. Those 17 will be the committee’s top 17 as well. Splitting hairs among those 17, though, is exactly that–splitting hairs. Will Iowa and Auburn be at the bottom due to their three losses? Probably, though maybe Auburn can sneak ahead of the Wisconsin-Michigan-Notre Dame trio.

Week 12 CFP Implications: Static at the top, chaos at the bottom https://t.co/s2ANdZtLNR

Among those 17 teams, there are plenty of reasonable things for the committee to do. And we will certainly learn something from the rankings, and–more importantly this week than in previous weeks–how Rob Mullens explains the rankings. Oklahoma’s placement will teach us a lot, as will Minnesota’s and Penn State’s. But I can’t particularly warn you what to look for, because none of the committee’s choices are particularly binary.

This week, it’s more important to listen. The committee has constantly kept to head-to-head results this year. Will that remain true with Minnesota and Penn State? Will the Gophers stay ahead of Penn State by not falling at all–or will Penn State be forced to drop so as to remain behind Minnesota? Then again, with the emphasis this committee places on dominating games, maybe Penn State will fall a spot or two anyway for struggling against Indiana.