The red-hot Kansas City Chiefs were installed as 3.5 point favorites over the Tampa Bay Buccaneers by Bet MGM. 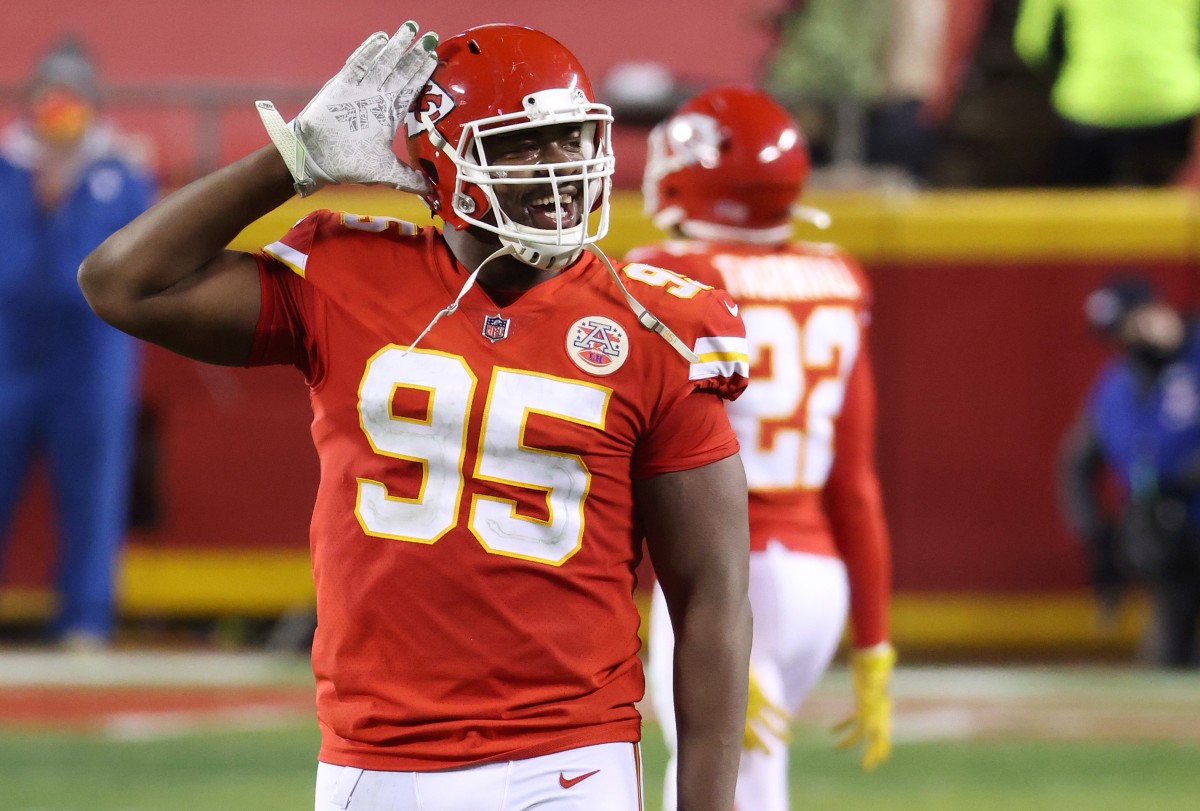 The Kansas City Chiefs, coming off the strength of an impressive 38-24 win in the AFC championship game, are 3.5-point favorites over the Tampa Bay Buccaneers, per Bet MGM.

Injury reports won’t be formally issued until the week of the game, but the Chiefs saw quarterback Patrick Mahomes play a stellar game despite spending the week on the injury report with a toe injury and having started off in the concussion protocol.

The Bucs did not appear to suffer any significant injuries in their 31-26 win over the Packers in the NFC championship. They were also 3.5 point underdogs in that game as well, showing the resilience one might expect when a team is led by a six-time Super Bowl champion (Tom Brady, who will be making his 10th Super Bowl appearance). The Bucs are the first team to play a Super Bowl in their home stadium.

The game is scheduled for 6:30 p.m. ET Sunday, Feb. 7 from Raymond James Stadium in Tampa.

The Chiefs look to become the first repeat champions since the Patriots did it in 2003-04 — a team quarterbacked by Bucs’ Tom Brady. 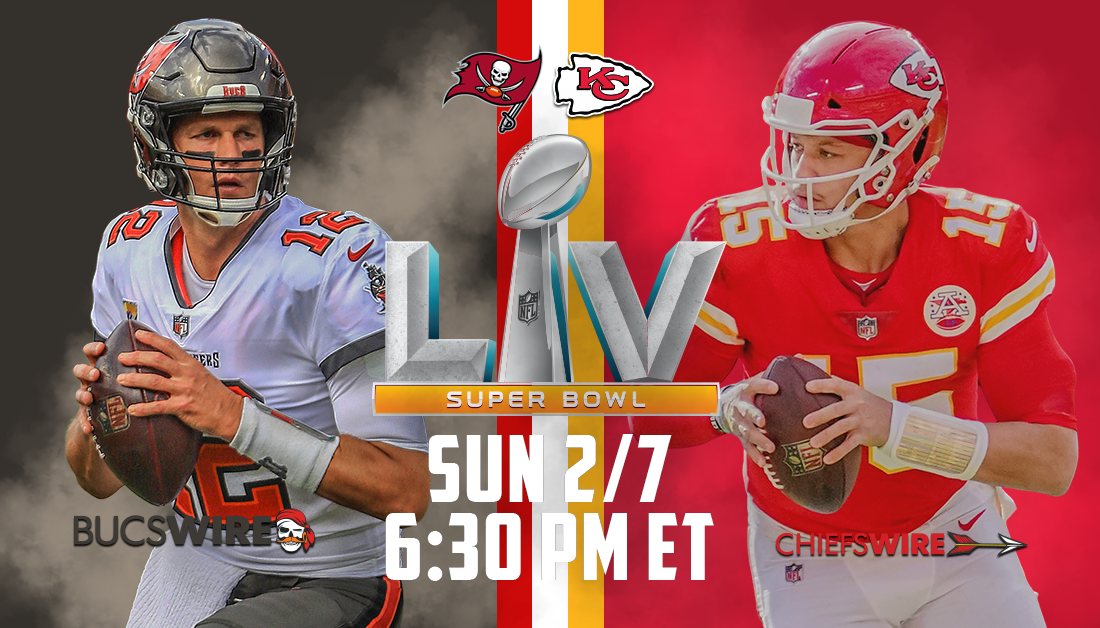 Super Bowl LV is set. The Kansas City Chiefs will make their second consecutive appearance after knocking off the Buffalo Bills in the AFC championship game. The Tampa Bay Buccaneers, who will be the first team to play in a Super Bowl in its home stadium, punched their first title game appearance since 2003 by way of upsetting the Green Bay Packers in the NFC championship game.

The Chiefs are seeking their second consecutive Super Bowl championship, which would make them the first team to accomplish that feat since the Patriots did it in 2003-04.

Standing in their way? The quarterback of those Patriots teams, Tom Brady, who might not have been perfect in Tampa Bay’s 31-26 win over the Packers, but has been strong for the Bucs all year.

Chiefs QB Patrick Mahomes underhanded a quick pass to Travis Kelce for his second touchdown toss of the night, giving KC a 31-15 lead. 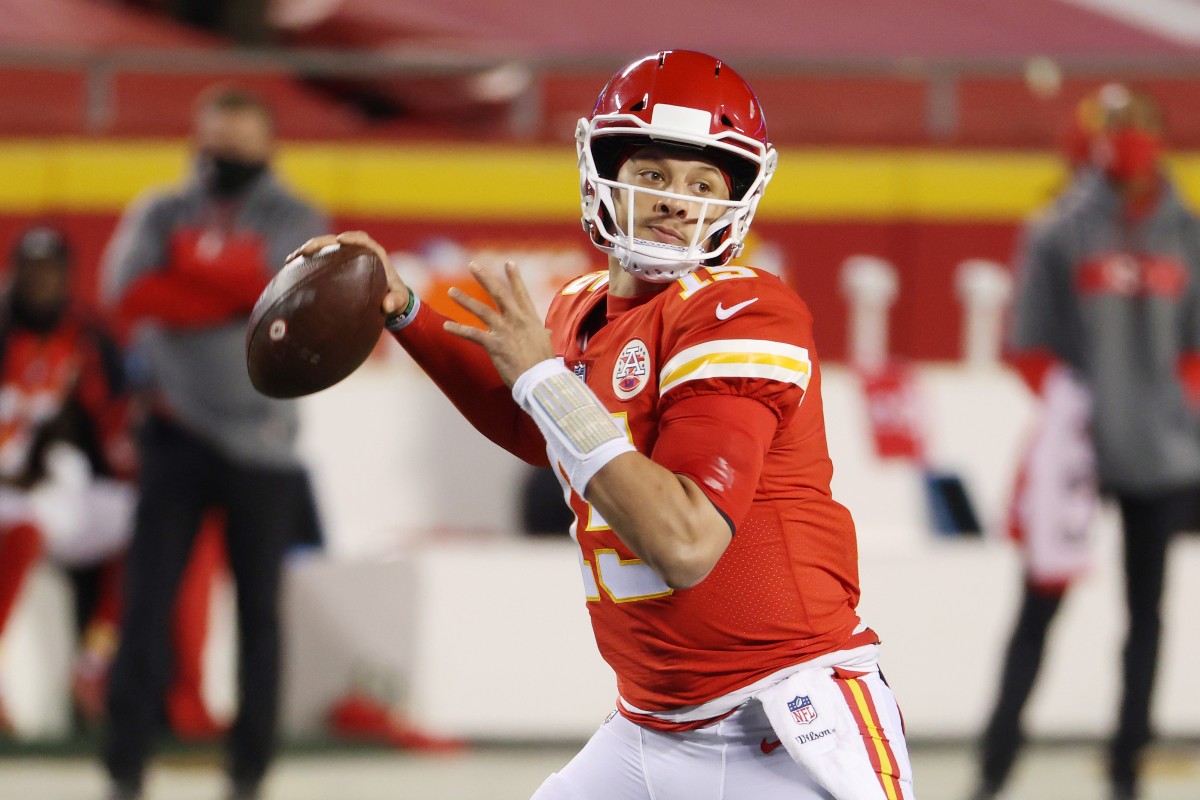 The Kansas City Chiefs fell behind 9-0 in their AFC championship game vs. the Buffalo Bills. Since that point, midway through the first quarter, the game has been all Chiefs.

Quarterback Patrick Mahomes flipped a quick underhand toss to tight end Travis Kelce for a 2-yard touchdown, a score ending a drive that was highlighted by a 71-yard catch-and-run by Tyreek Hill.

Hill had 160 yards on eight catches after that play, and it was Mahomes’ second touchdown toss of the night.

The Bills fought back on the ensuing drive, that lasted into the start of the fourth quarter. A Josh Allen pass to Cole Beasley set up a 4th and 1 from Buffalo’s 38-yard line. A short conversion on that play later, Buffalo was in business to stay alive.

But a deflected pass ended up in the hands of Chiefs defensive back Rashad Fenton. It was Allen’s first postseason interception, and it might be the straw that broke the Bills’ back. Time is running out, and Mahomes and his army of athletic options waits on the other sideline, holding a firm grip on the Bills’ defense.

Tom Brady is set to appear in his 10th Super Bowl as the Buccaneers defeated the Packers 31-26 in the NFC championship game. 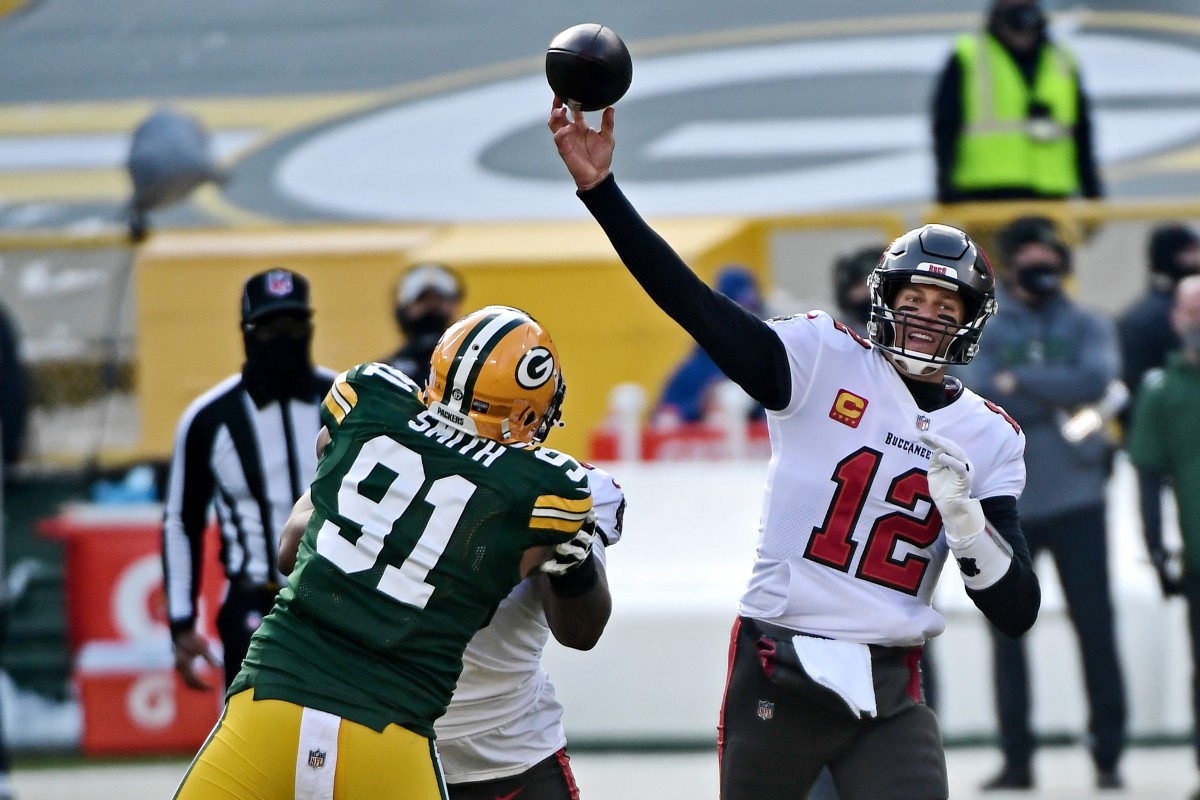 All Buccaneers quarterback Tom Brady needed to do to break his Super Bowl slump was change teams.

It had been one entire year since the Super Bowl didn’t see Brady’s uniformed shadow. Coming off a season where Brady’s Patriots fell to the Titans in the AFC divisional playoffs, Tom Terrific went south, and led the Bucs to their first Super Bowl since 2002, punching their ticket with a 31-26 win over the host Packers in a back-and-forth battle at Lambeau Field Sunday.

Brady was far from perfect, throwing three interceptions – two coming while the Bucs were well ahead. They carried a 28-10 lead early in the third quarter. The Bucs’ offense faltered as the Packers — led by likely NFL MVP Aaron Rodgers’ three touchdown passes — roared back, pulling within five.

A controversial pass interference call against the Packers on third down extended the Bucs’ final offensive possession, draining the Packers of their final timeouts. Tampa Bay chose to run the ball, and the clock, the rest of the way out, sealing it on a 5-yard run by Chris Godwin.

It’s Brady’s 10th Super Bowl, but the first time in NFL history a team will play the game in its home stadium. The Bucs await the winner of the Chiefs and Bills in the AFC title game. 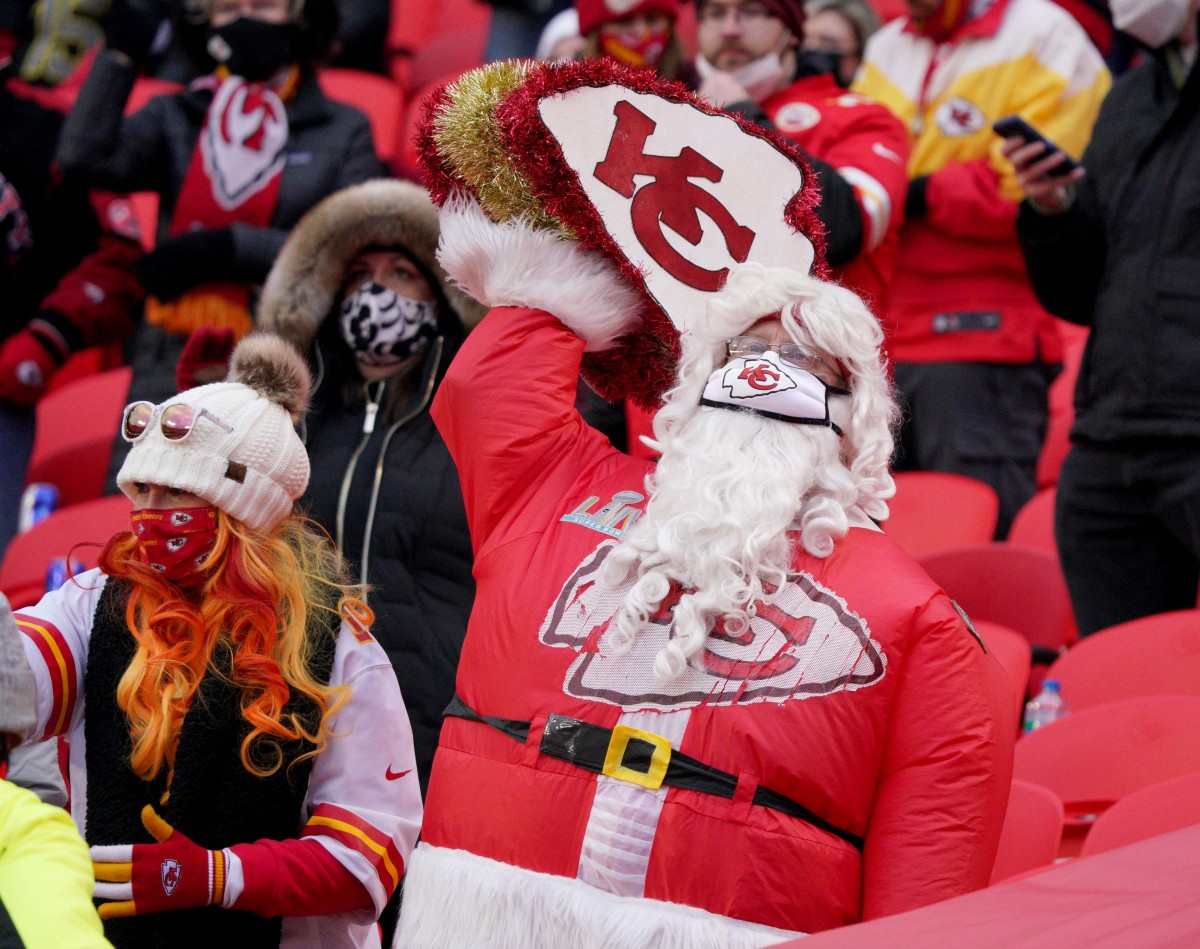 All four teams in Sunday’s NFL Conference Champion Games have released hype videos to inspire and fire up their fandom. The Buffalo Bills, Kansas City Chiefs, Tampa Bay Buccaneers, and Green Bay Packers are ready. And they want to make sure their faithful are.

Battle of the Bays. 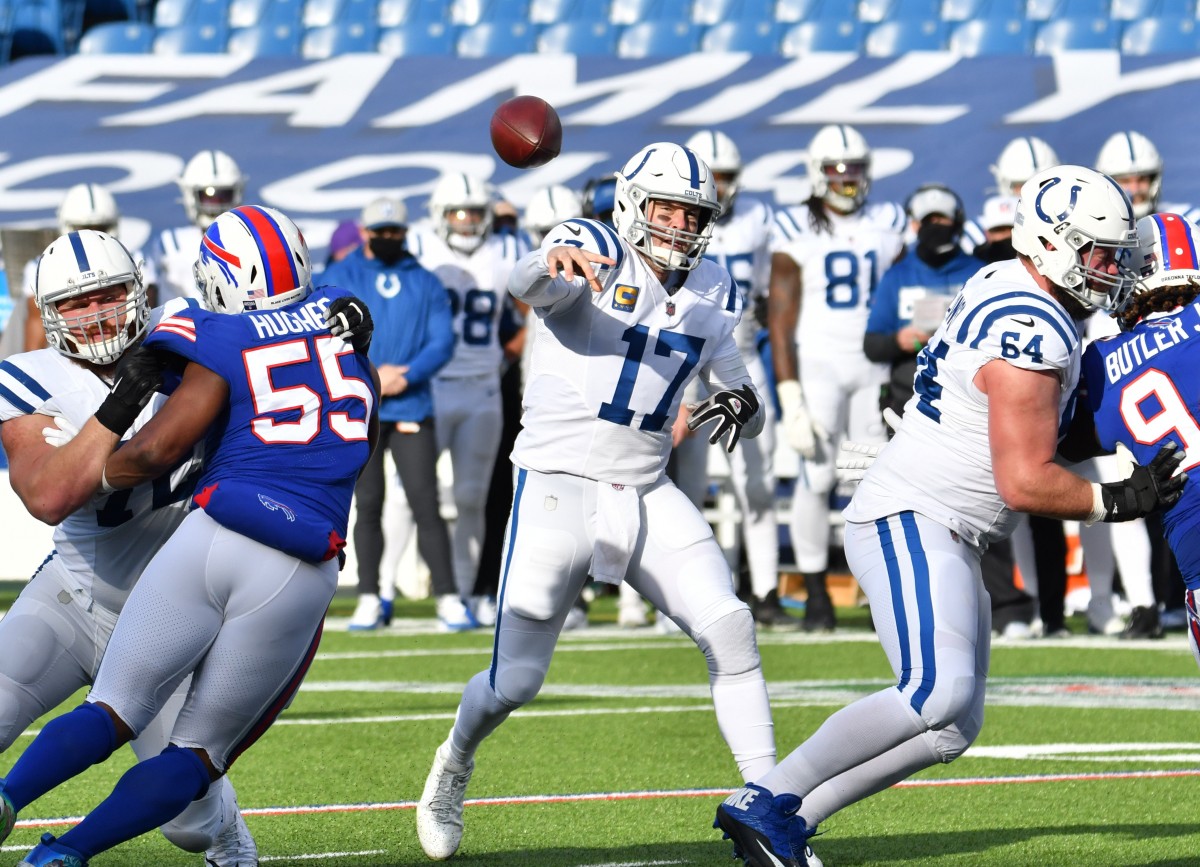 The Indianapolis Colts are putting up quite a fight against the Buffalo Bills.

Indianapolis failed on its first two-point conversion attempt and had to go for two after its next TD. Rivers found Jack Doyle for the pair. Doyle caught the TD pass that brought Indy within five. The previous one went to Zach Pascal.

The @Colts pull within 3 after the two-point conversion. #ForTheShoe

With just four teams remaining, here’s one thing each of these teams must do if they want to make it to Super Bowl LIV. 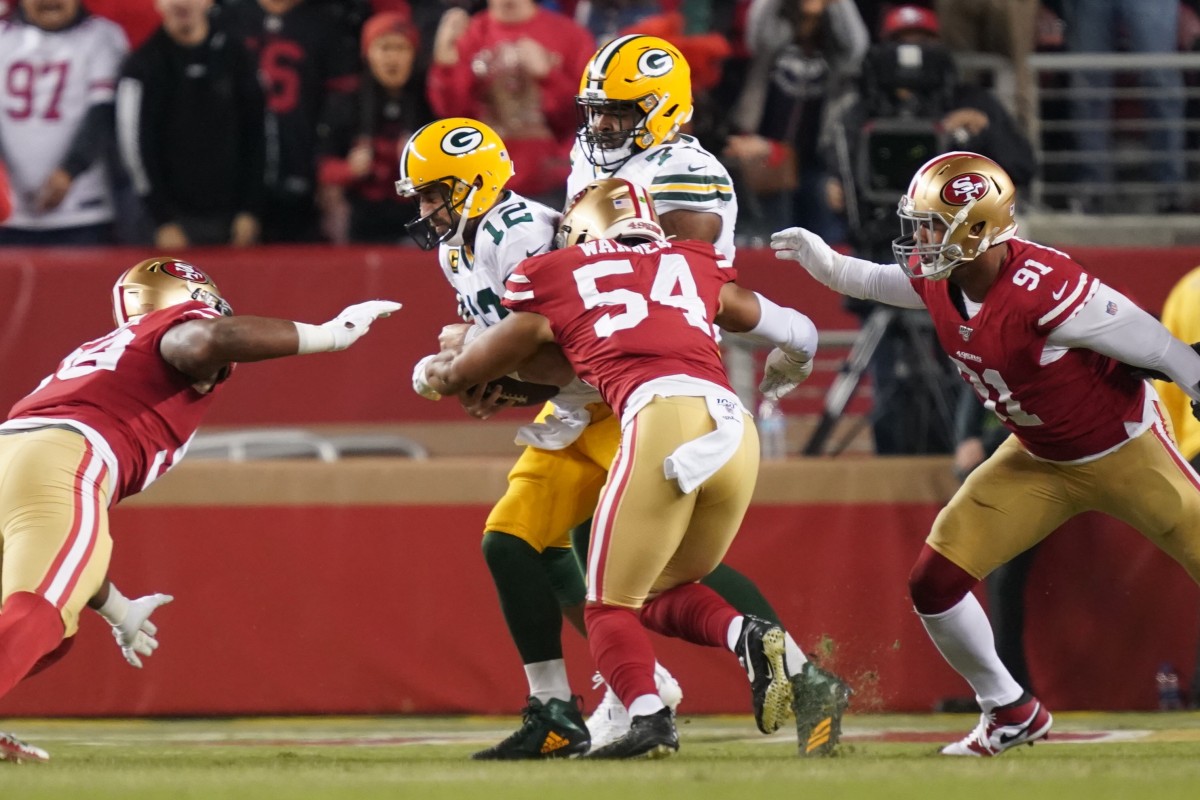 Losing in any elimination game gives you the entire offseason to think about the things you should have done. For the Tennessee Titans, Kansas City Chiefs, San Francisco 49ers, and Green Bay Packers, there’s still that one last hope for the Super Bowl that no other team still has this season. The AFC and NFC Championship game entrants have faced off in the regular season already.

In Week 10, the Titans came back from a 10-0 Chiefs lead, and Patrick Mahomes’ three-touchdown performance, to beat Kansas City 35-32. Ryan Tannehill, still in his first few games as Marcus Mariota’s replacement, threw a 23-yard touchdown pass to receiver Adam Humphries with 29 seconds left in regulation, and Chiefs kicker Harrison Butker missed a potential game-tying 52-yard field goal at the end of regulation. At least the Chiefs can say they were in that game.

The Packers, not so much. In Week 12, the 49ers beat the daylights out of Green Bay, 37-8. Aaron Rodgers averaged 3.15 yards per completion when he was able to throw the ball, the Packers went 1-for-15 on third down, and a defense that had been relatively on point allowed Jimmy Garoppolo to look like Joe Montana.

Still, the good news for both losing teams in this instance is that neither the Chiefs nor the Packers have lost a single game since those particular defeats. Mahomes seems to have recovered from his in-season injuries, Green Bay’s passing offense is more explosive, Kansas City’s defense is far better than it used to be, and the Packers’ coverage units seem to have recovered from what 49ers head coach and play-designer Kyle Shanahan did to them.

That said, the Titans are as in-tune as any remaining team on both sides of the ball, and with the postseason return of edge-rusher Dee Ford, linebacker Kwon Alexander, and safety Jaquiski Tartt, San Francisco’s defense has recovered nicely from a late-season swoon.

So, if we take the conference title games as new entities (as we should) while attempting to learn from the past, here’s one thing each of the remaining teams should do if they want to make it to Super Bowl LIV.

The Packers and the Niners meet for the NFC berth in the Super Bowl. Sold bold predictions for the big tussle. 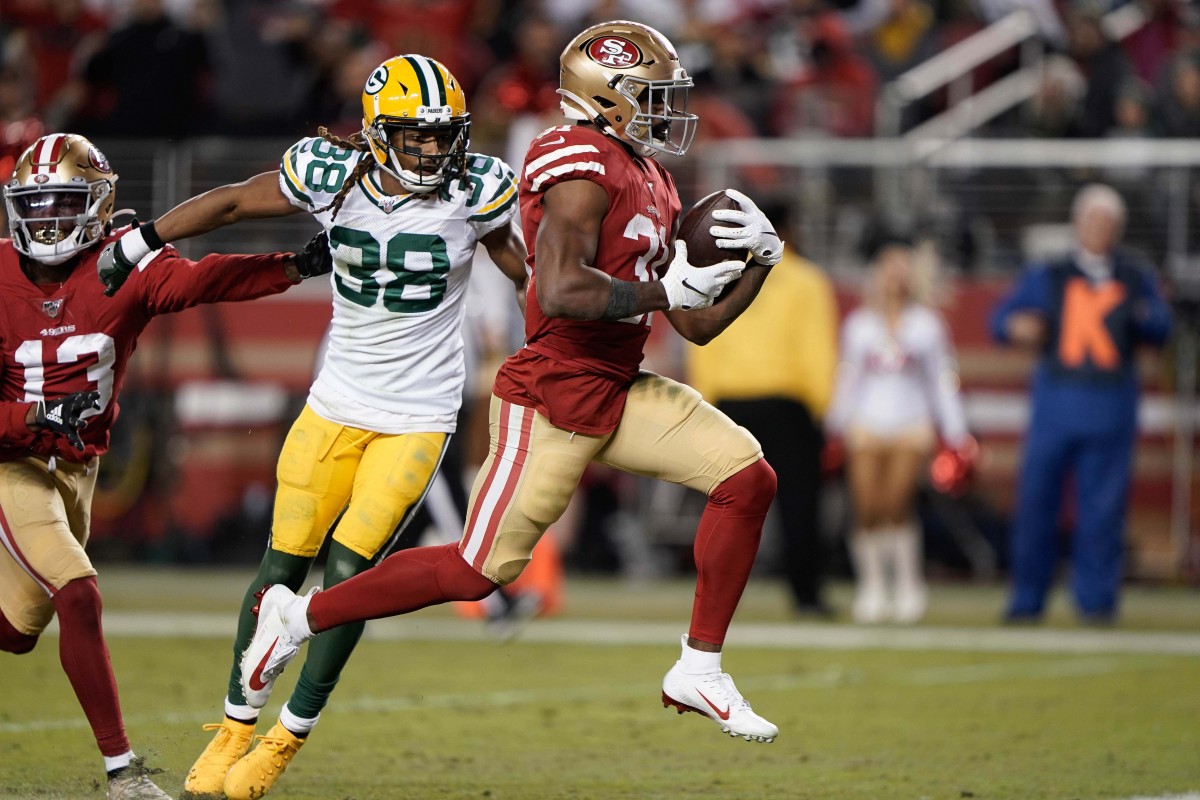 The San Francisco 49ers play host to the Green Bay Packers Sunday at Levi’s Stadium with the NFC Super Bowl berth on the line. The game is a rematch of a regular-season rout that saw San Francisco roll to a 37-8 victory. Expect another lopisded contest or will Aaron Rodgers & Co. have more answers? Some bold predictions

Rodgers will throw for more than 104 yards

Don’t expect the Niners to shut down Aaron Rodgers the way they did in the first meeting. The Packers were totally out of sorts and off their game for the entire contest. Rodgers won’t let that happen again.

Seven bold predictions for the massive clash between the Tennessee Titans and Kansas City Chiefs with a Super Bowl berth at stake. 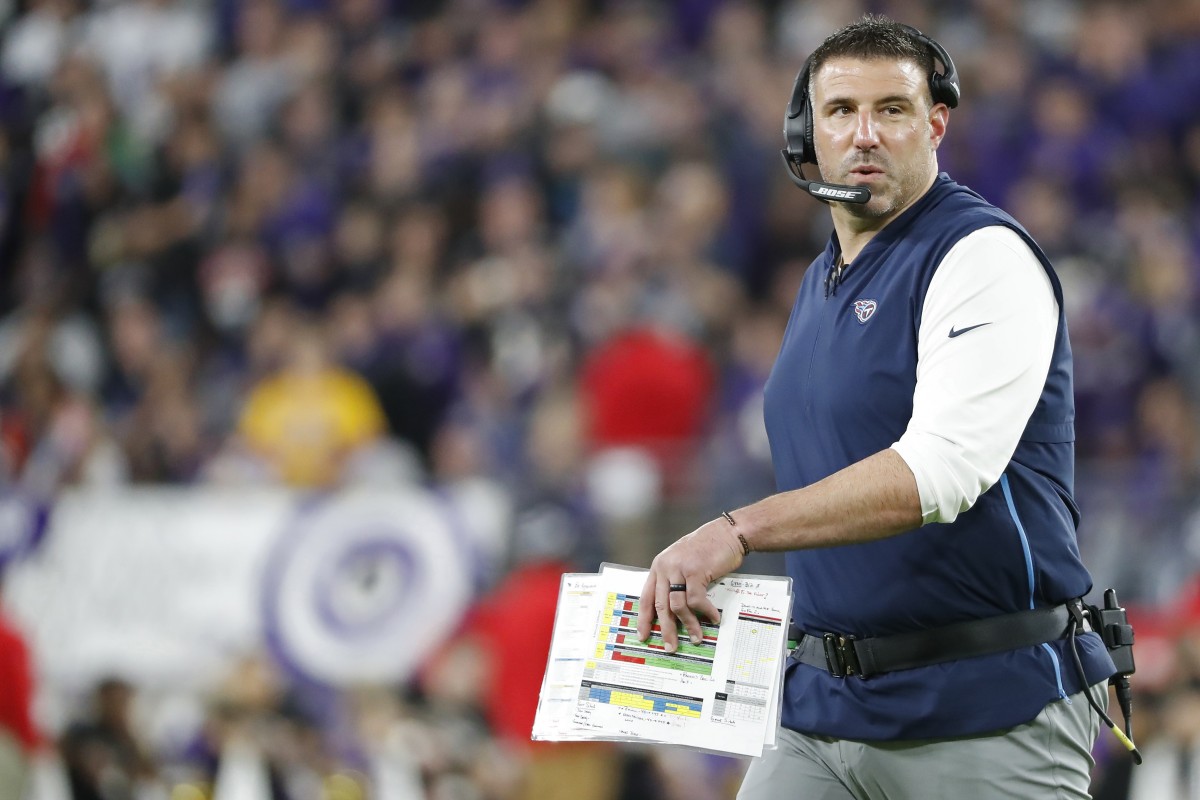 The AFC Championship Game will be played Sunday at Arrowhead in Kansas City. The high-flying Chiefs against the surprising Tennesee Titans. There are big names that rise up in big games and sometimes the least likely player becomes the hero.

Henry will break the century mark

Derrick Henry won’t be the reason Tennessee stumbles against Kansas City. In the AFC Championship Game, he will continue his run toward free agency with 20-plus carries and 125 yards. He will need to find the end zone a couple times for the Titans to have a prayer.

Though any are unknown, every player in the postseason has the opportunity to turn that around. Here are eight such players. 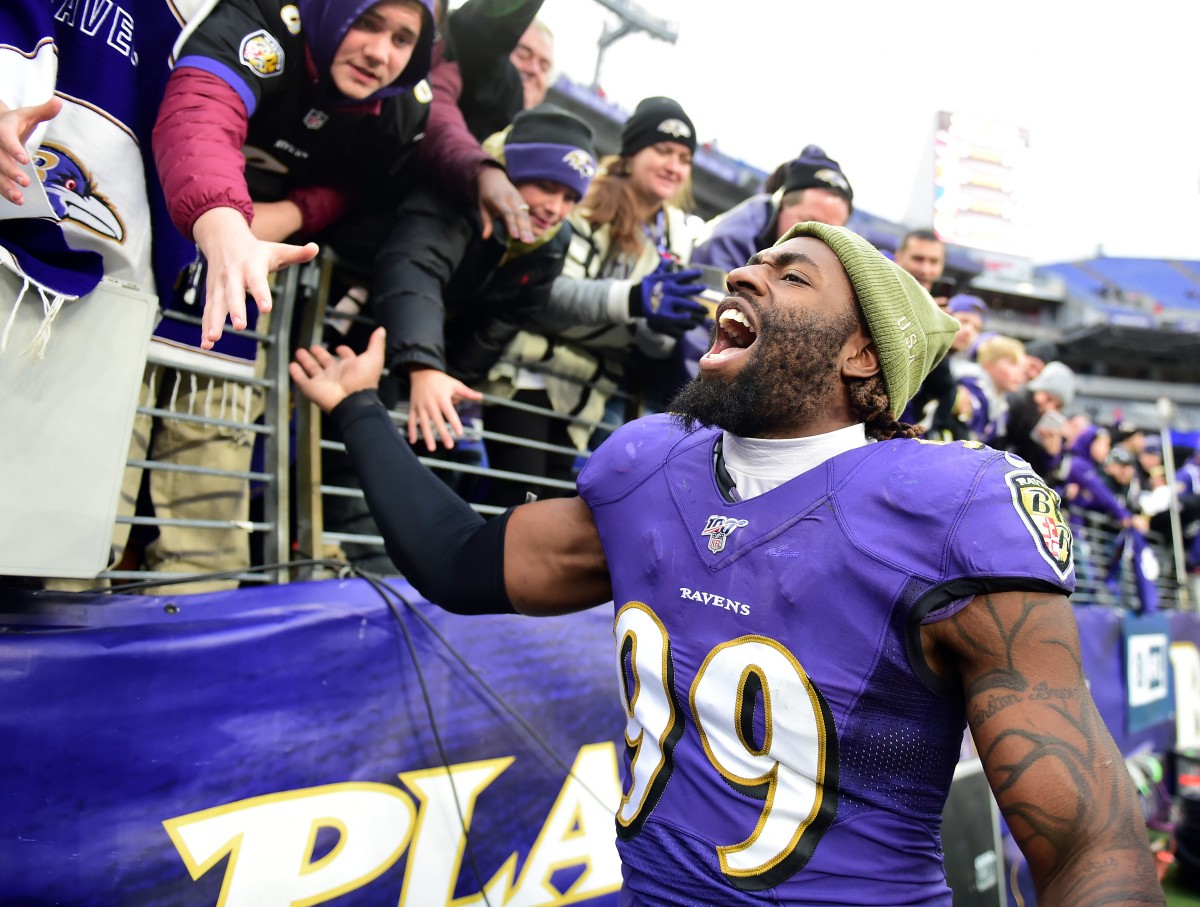 Every NFL postseason has its share of surprise performers. Whether it’s Otto Graham in the Browns’ first year in the NFL schooling the Los Angeles Rams in the 1950 championship game, or L.C. Greenwood — perhaps the least-known member of the Steel Curtain front four — racking up four sacks against the Cowboys in Super Bowl X, or then-Bills backup quarterback and current Colts head coach Frank Reich authoring the biggest comeback in NFL history against the Houston Oilers in the 1992 wild-card round, or Washington running back Timmy Smith shocking the Broncos with 204 rushing yards in Super Bowl XXII, it’s just as likely that the most important postseason performance comes from a guy whose name you’re not familiar with just yet.

This postseason is no exception, and there are all kinds of potential stars you might not know who are mere hours away from their breakout performance. Here’s one potential secret superstar for each of the eight divisional round teams this weekend.