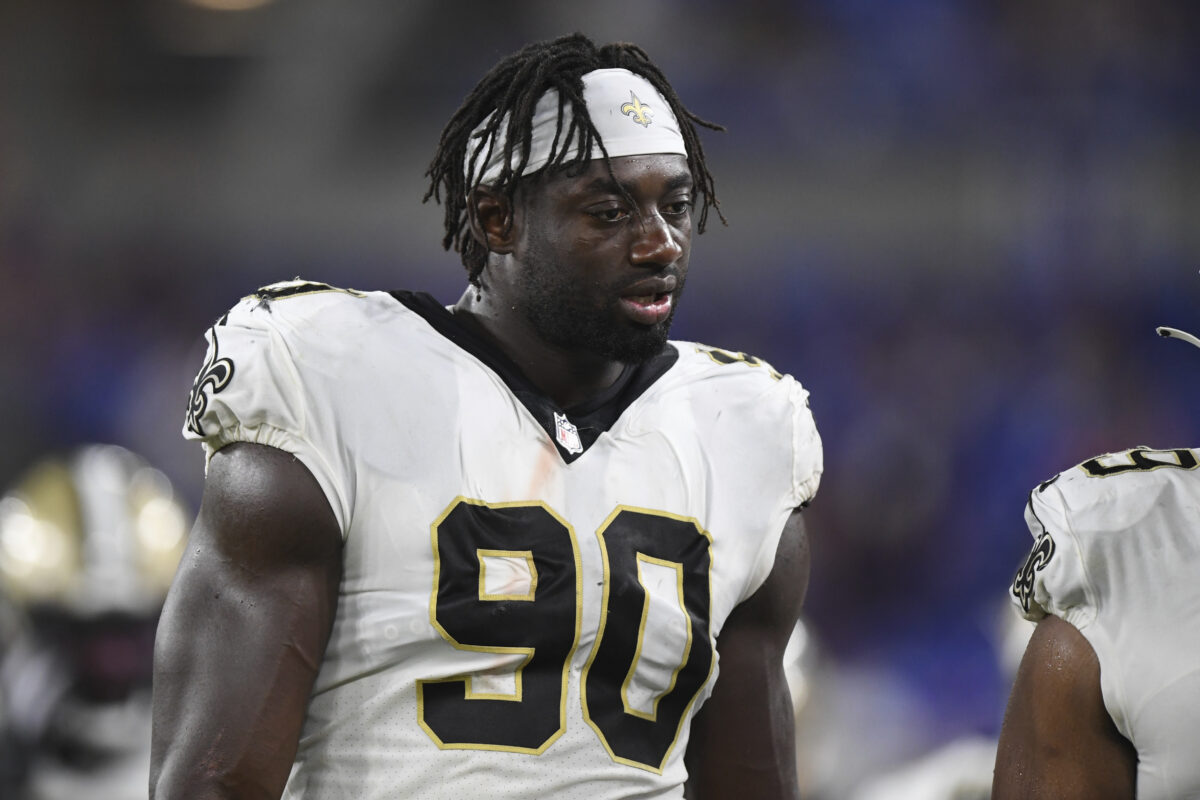 It’s no secret that the New Orleans Saints were not big spenders in free agency. They had to race to reach salary cap compliance from a $100 million deficit, leaving them with little resources to commit to improving their squad. Of the players they did sign only a select few joined the black and gold for more than a minimum salary.

Still, the Saints were able to add a number of new faces despite those financial limitations. Some of them (Tanoh Kpassagnon and Bradley Roby) made a greater impression than others (Austin Reiter and Prince Amukamara), who were only around long enough to get a cup of coffee. Here are how the top 15 Saints pickups have fared at the bye week: 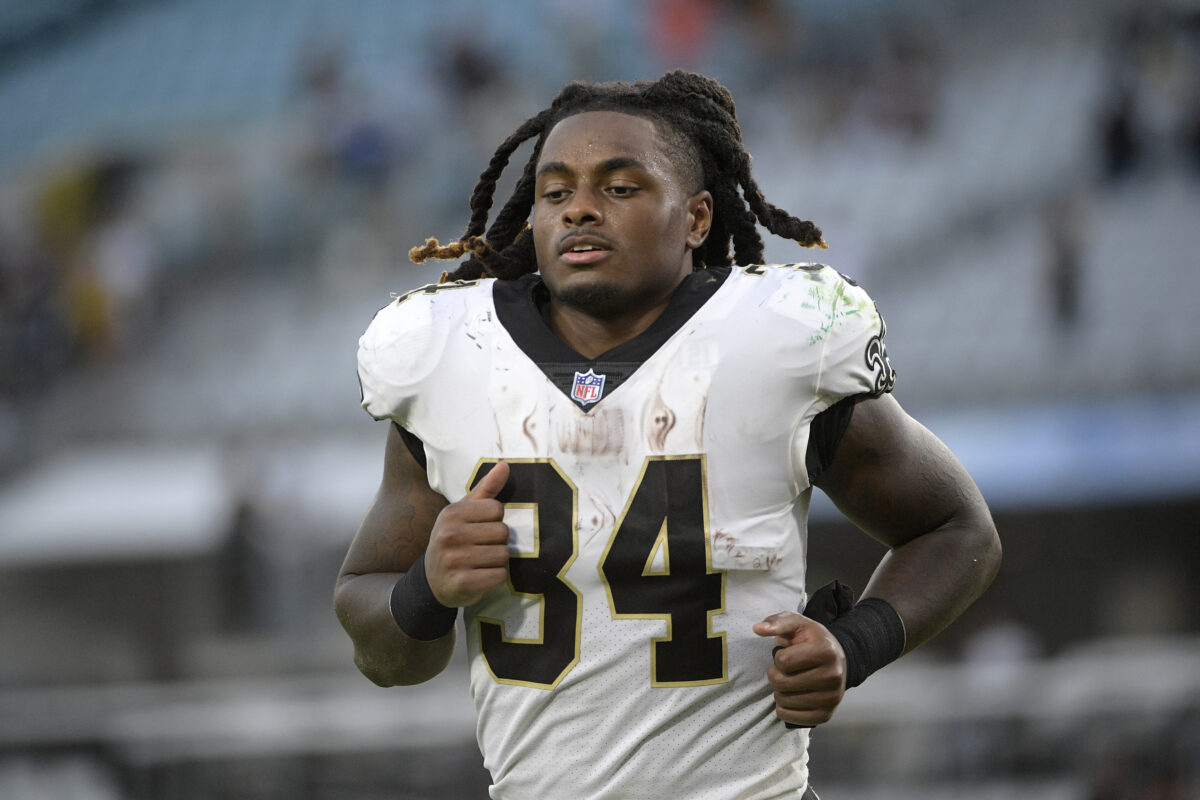 We haven’t learned many specifics about the ankle injury Tony Jones Jr. suffered against the New York Giants, but ESPN’s Adam Schefter reported Tuesday afternoon that the New Orleans Saints’ backup running back is facing an absence of three to four weeks while recovering.

While New Orleans could get by with Alvin Kamara and Dwayne Washington in a pinch, that prompted the team to bring in a group of five free agents for workouts while searching for a third runner:

Should the Saints reunite Breshad Perriman with Jameis Winston? 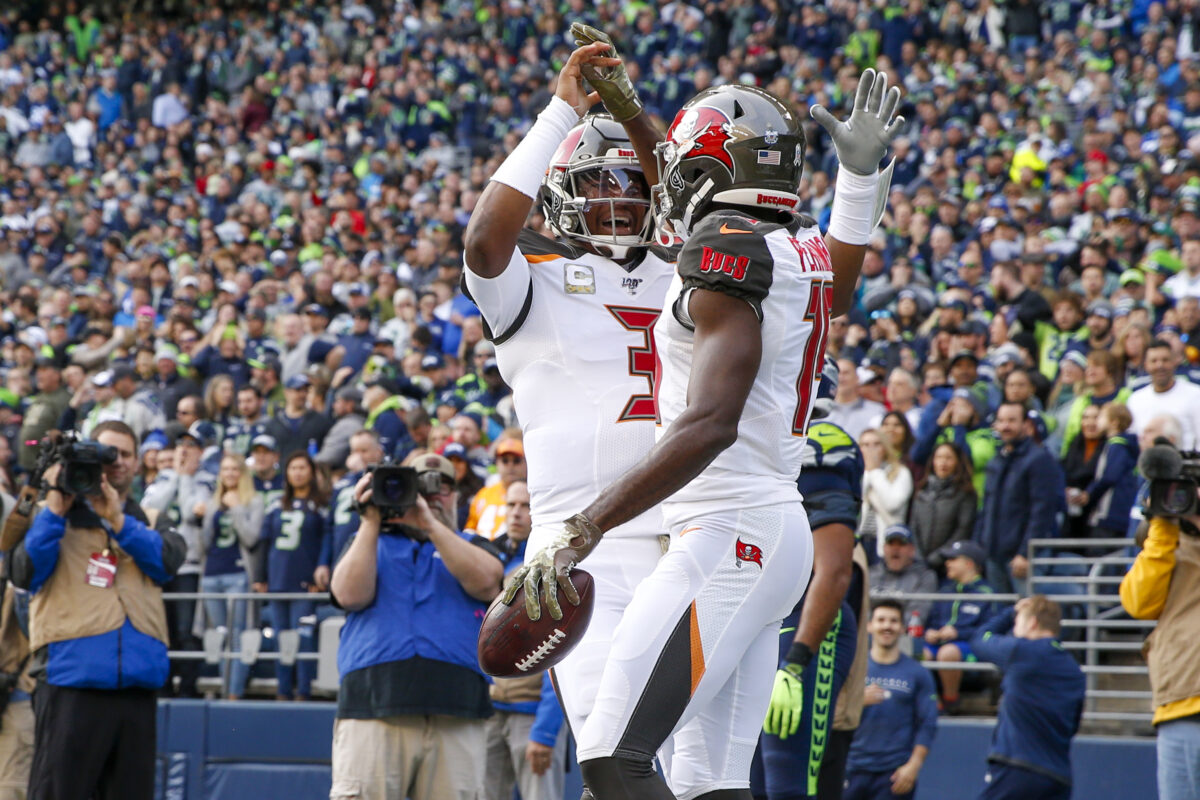 The New Orleans Saints aren’t really in a position to be picky about available wide receivers. With Michael Thomas and Tre’Quan Smith both missing extensive time this summer with injuries and a two-game suspension hanging over Deonte Harris’ head, it’s fallen to second-year pro Marquez Callaway to be the tip of the spear for the unit. Things have gotten so rough that Chris Hogan hung up his lacrosse gear and immediately started outplaying his competition in Saints training camp. Jameis Winston could use a better supporting cast.

That means it’s noteworthy when Breshad Perriman became available. The Detroit Lions waived the veteran after a rough summer — between a hip injury, Jared Goff at quarterback, and struggling to buy into the rebuilding Dan Campbell-led Lions, he just didn’t move the needle for one of the few receiving corps in worse shape than New Orleans’. So why even float his name?

Perriman’s best season came in 2019, when his quarterback was Jameis Winston. He was an able third wheel behind Mike Evans and Chris Godwin, and stepped up in a big way as Winston’s primary target once those two were sidelined by injuries late in the season. However, Perriman fell back to earth in 2020 (on the doomed New York Jets, helmed by Adam Gase and Sam Darnold) and now he’s washed out of Detroit. He hasn’t lasted anywhere he’s played, but his flash in the pan with Winston is an interesting aberration.

Maybe Perriman can find that energy again when paired with a big-armed quarterback who will trust him (maybe too faithfully) to go out and make a play. The Saints aren’t in a position to write him off out of hand. But Campbell’s strong relationship with his mentor Sean Payton could end up outweighing any chemistry Winston and Perriman once shared. At this point, though, with little to no salary cap impact and a clear need at the position — I’ve got to ask, why not give it a try? What do the Saints have to lose? 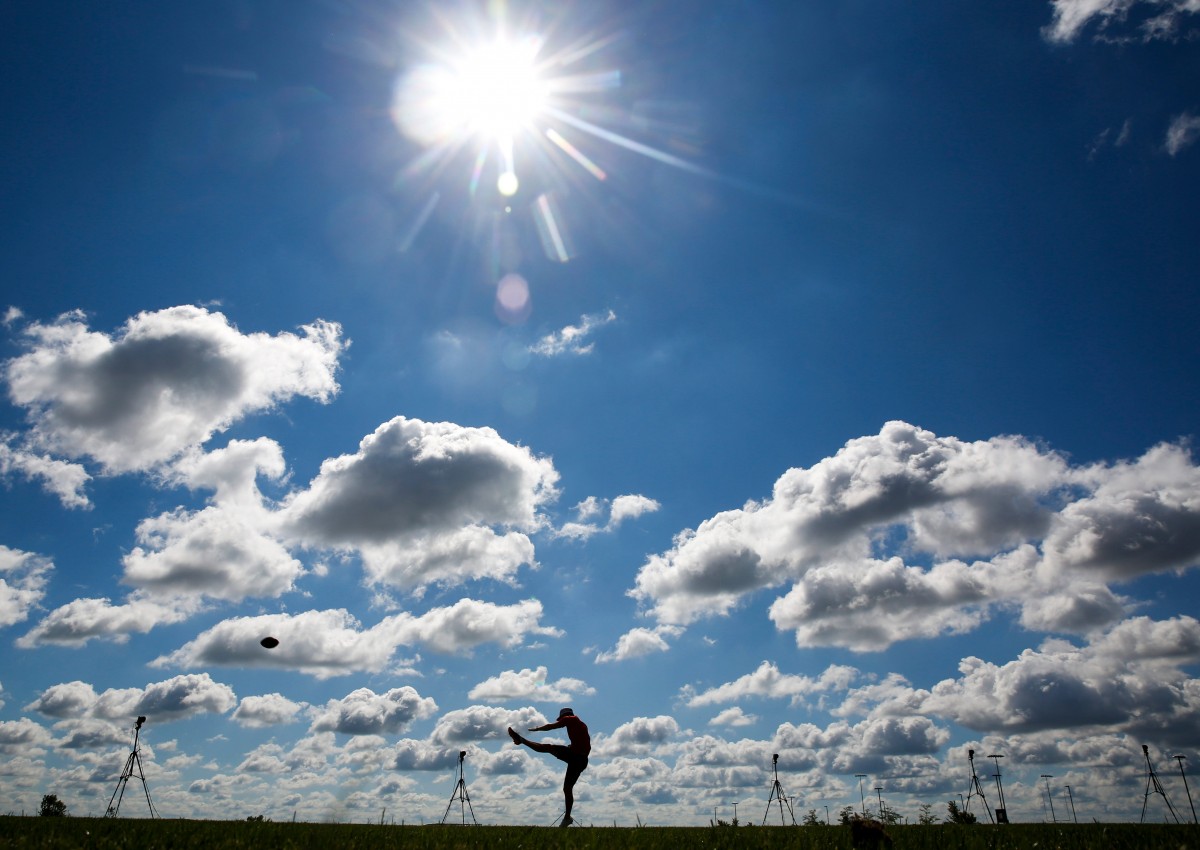 News of Wil Lutz’s upcoming core muscle surgery meant that the New Orleans Saints would be trying out free agent kickers on Monday, and it didn’t take them long to choose which one to sign: Brett Maher, who last kicked for the Dallas Cowboys in 2018 and 2019. ESPN’s Mike Triplett first reported the signing, which was confirmed by NewOrleans.Football’s Nick Underhill and Amie Just of the Times-Picayune | Advocate.

Maher, 31, first entered the NFL as a punter back in 2013 and has bounced all around ever since, working as a placekicker full-time in 2014. He’s spent time with six different NFL teams (twice with the Jets and Cowboys, plus stops in Washington, Cleveland, Houston, and Arizona) and three CFL teams over the years, though his only extended action came with Dallas.

He’s connected on 49 of 66 career field goal tries (74.2%) and missed just once on 69 extra-point attempts in 29 games. Maher also singlehandedly won the first victory in the Ottawa Redblacks’ franchise history by making all six field goals in an 18-17 surprise. So we’ve got that going for us.

He’s no Lutz, but Maher is an experienced leg who will get ample opportunity to make his case throughout the preseason. Hopefully he can hold down the fort until No. 3 is ready to return. 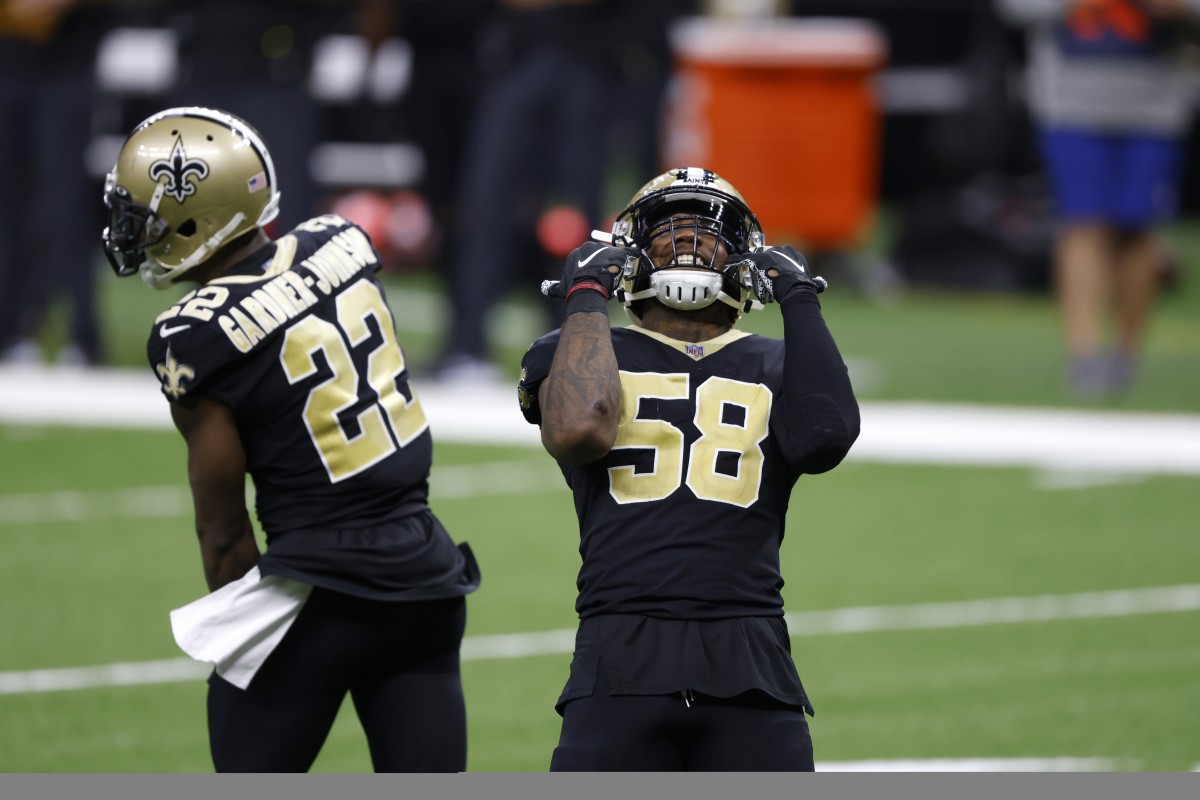 Free-agent linebacker Kwon Alexander and the Saints have agreed to a year deal worth up to $3 million, @DrewJRosenhaus told ESPN. Alexander played with the Saints last season and is an LSU alum and he lands in New Orleans today, his birthday.

Happy birthday, Kwon Alexander. The linebacker celebrated his 27th birthday by re-signing with the New Orleans Saints on a one-year contract valued at up to $3 million if he hits various incentives, per ESPN’s Adam Schefter, reuniting the fan-favorite with the black and gold.

Initially acquired in a midseason trade with the San Francisco 49ers, Alexander hit the ground running in New Orleans and formed a dynamic pairing with All-Pro linebacker Demario Davis. But a late-season Achilles injury cut his tenure short, and the Saints released him as a salary cap early in the offseason. He’s since diligently rehabbed his surgically-repaired ankle and has a chance to compete for a starting job.

Alexander must outplay two different young draft picks to run with Davis in the starting lineup; rookie second rounder Pete Werner has played well in training camp, rotating in often with Zack Baun, last year’s third round pick. With New Orleans primarily running a two-linebacker defense, only one of those three candidates figure to make the cut.

KeiVarae Russell has played more snaps on special teams than defense with the Bengals and Packers, which could appeal to the Saints in free agent tryouts: 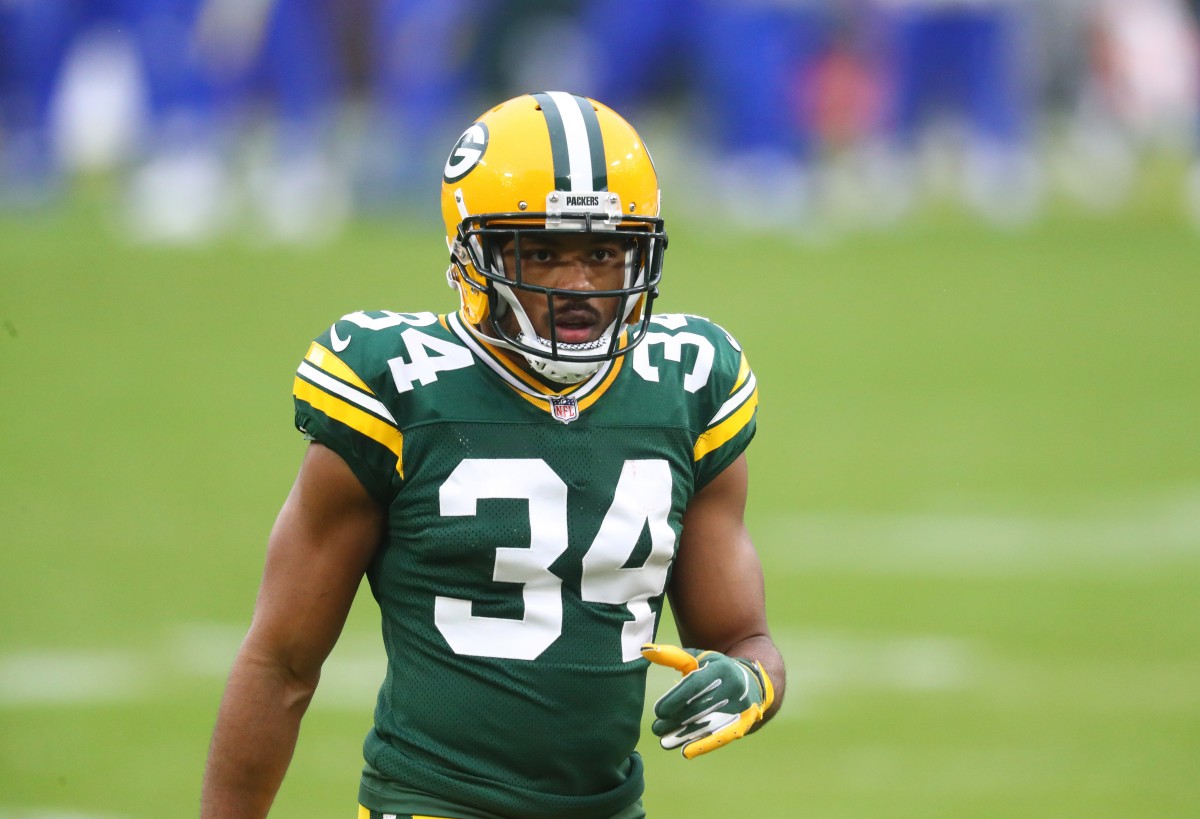 Former Bengals and Packers CB KeiVarae Russell is also among the veteran CBs in New Orleans today to work out for the Saints.

Don’t say the New Orleans Saints aren’t ignoring their biggest need. They just aren’t going after the biggest fish in the pond. ESPN’s Dan Graziano reported Sunday that the Saints plan to work out several free agent cornerbacks, including former Cincinnati Bengals third-round draft pick KeiVarae Russell. But Russell has played more snaps on special teams (214) than on defense (184) in his four-year career, including three games with the Green Bay Packers in 2020. So he’s probably seen as a candidate to replace Justin Hardee Sr. as the team’s top corner in the kicking game rather than a fill-in for Janoris Jenkins with the starting lineup.

That could be the vision for Prince Amukamara, though. The former New York Giants and Chicago Bears starter is also visiting New Orleans in hopes of finding a deal, having spent the 2020 season on the Arizona Cardinals practice squad. He’s on the wrong side of 30 to be a long-time answer for the Saints, but his experience working against top-tier receivers is valuable. If he’s willing to sign at the veteran’s minimum as other recent Saints free agent pickups, maybe he sticks around.

It’s unclear which other corners could be working out today; only Russell and Amukamara have been identified so far. But the Saints coaches and scouts have an opportunity to put these free agents through their paces while the players are off, with their next training camp practice scheduled for Monday (the final session before they take the field in pads on Tuesday). But keep in mind that the Saints must open a roster spot if they want to add anyone — Saturday’s Devonta Freeman signing put them at the 90-man roster limit. Hopefully they’re able to find a corner worth the effort. 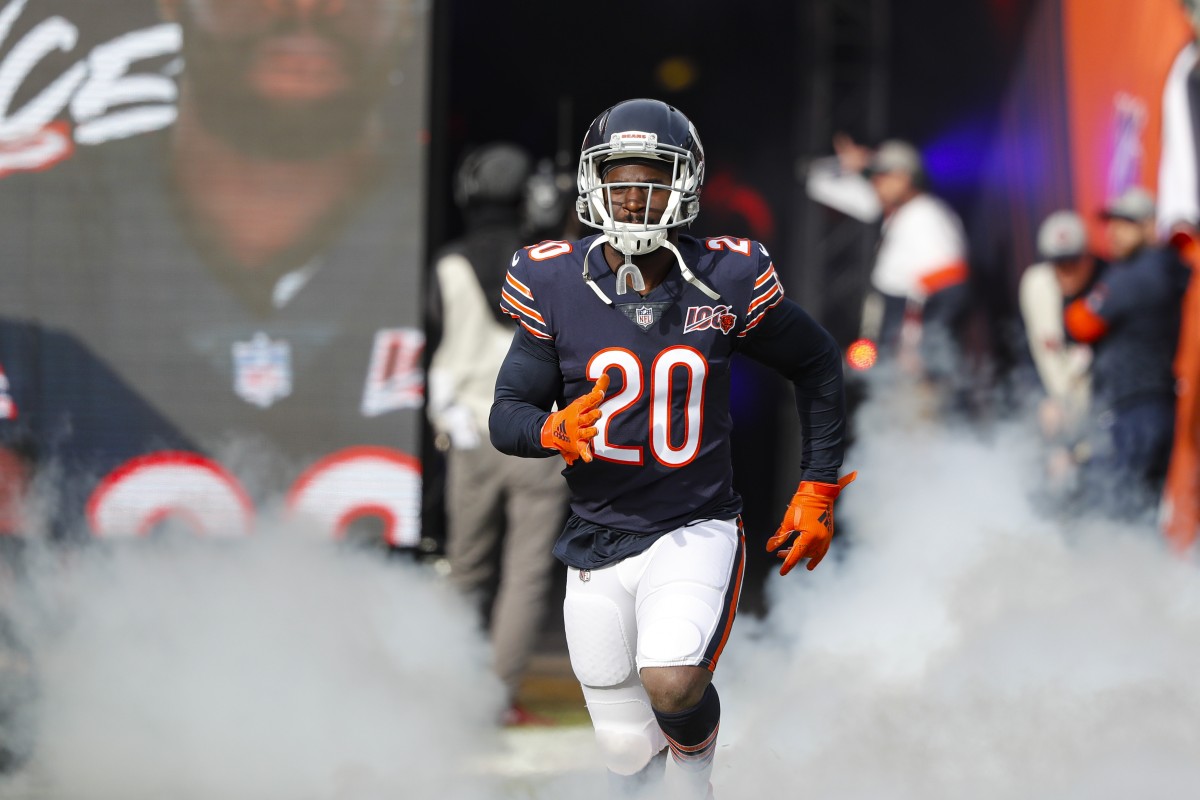 Multiple free agent tryouts were reported by the New Orleans Saints on Saturday’s update to the daily NFL transactions wire, and some of them may have a lot to offer. You just need to look past initial positions of need and consider the wider scope of the roster as it currently stands. Let’s dig in:

Former NFL receiver Chris Hogan took a break from the Premier Lacrosse League to try out for the New Orleans Saints: 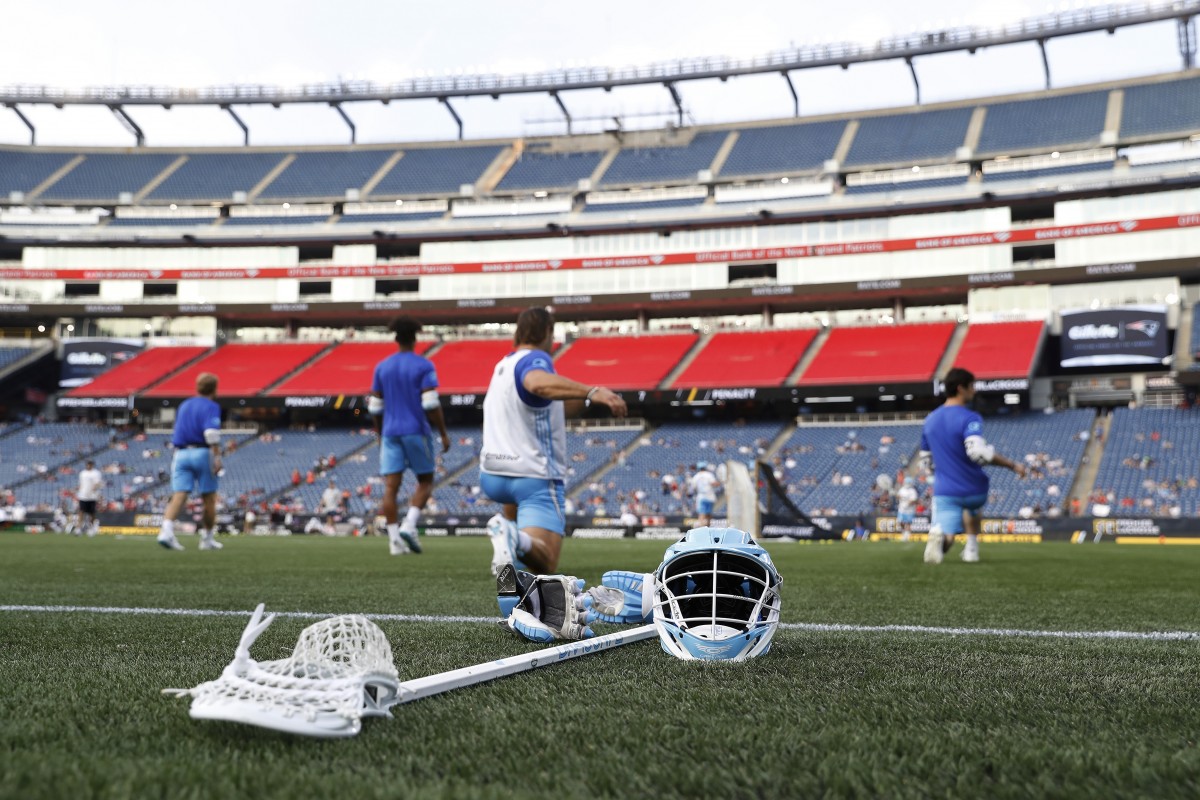 Hogan is in the middle of his first season in the Premier Lacrosse League, which was supportive of his workout with the #Saints and his NFL aspirations. https://t.co/Uk4qtmbMFF

The New Orleans Saints are leaving no stone unturned in their search for help at wide receiver following Michael Thomas’ prolonged absence in recovering from ankle surgery. NFL Network’s Mike Garafolo reports that the Saints are hosting a group of free agents for a workout on Monday, notably including former New England Patriots receiver Chris Hogan.

Hogan has been making a career turn with the Premier Lacrosse League, but obviously he’s still interested in a return to the NFL. The 33-year old has spent nine years playing pro football, including stops with the Buffalo Bills, Carolina Panthers, and New York Jets. He’s averaged 12.9 yards per reception in his 100-game career, not including nine playoff contests. 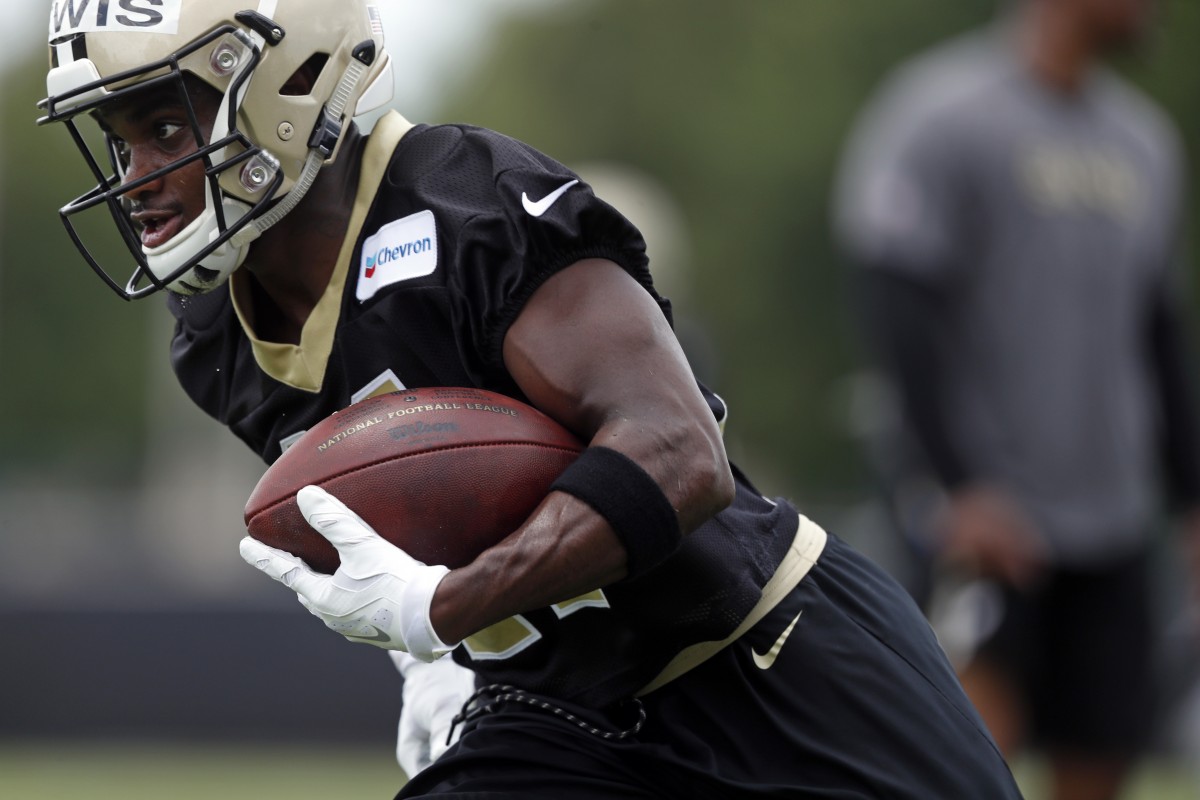 Westbrook has been a trendy pick by fans on social media hoping for reinforcements following news of Michael Thomas’ prolonged absence after ankle surgery. And Lewis has always seemed to reappear with the Saints over the years, with some fans speculating he could get another call now that New Orleans has a spot open in the training camp rotation.

Lewis, 28, caught on with the Saints as an undrafted rookie out of Northern Illinois back in 2016. He went on to catch 21 passes in 39 regular season (also taking the field in four playoff games) while doing the bulk of his work on special teams, where he averaged 9 yards per attempt on 45 tries as a punt returner.

Westbrook, 27, has a larger body of work (160 receptions in 40 regular season games, with three postseason appearances, plus an average of 9.8 yards on 47 punt returns), and most of the media focus in Minnesota has rightfully centered on him. But he and Lewis aren’t too far apart at this point in their careers — each caught just one pass last season, with Lewis gaining 5 yards against Westbrook’s 4 yard-pickup.

The workout went well for Westbrook, who spoke glowingly about his experience with the Vikings organization. We’ll see if he leaves town without a contract or if the Saints show interest in either him or Lewis. For now, it seems New Orleans is content to work with who they already have.

Update: NFL insider Josina Anderson reports that Westbrook intends to sign a one-year contract with Minnesota on Sunday. So that’s that. The Saints’ already-limited options just got thinner. 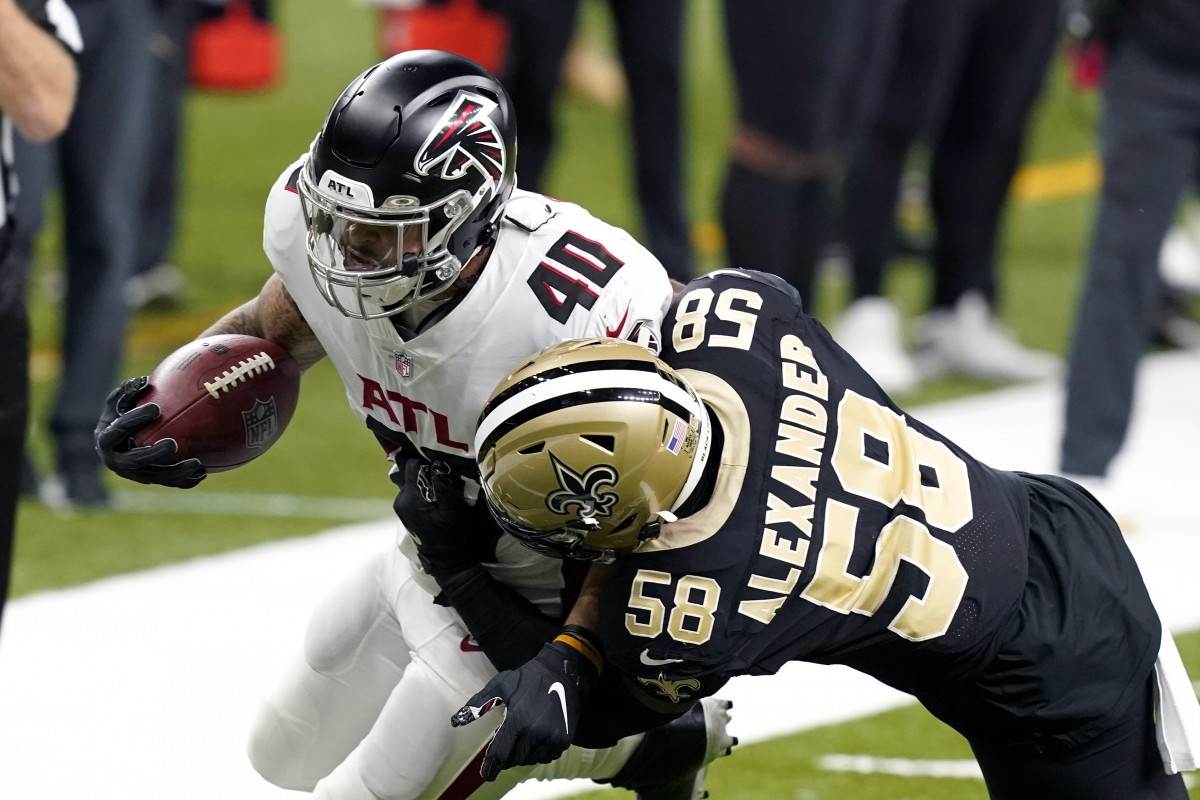 Kwon Alexander also now has been cleared from his Achilles injury and is ready for football drills, per source. https://t.co/9bJL098MW5

The New Orleans Saints finally have some salary cap space, and we might have an idea of what they intend to do with it. ESPN’s Adam Schefter reported Tuesday that free agent linebacker Kwon Alexander was visiting the team while weighing options from several other NFL teams, adding that Alexander was cleared from his 2020 season-ending injury and ready for football.

Alexander was acquired in a mid season trade with the San Francisco 49ers and immediately made an impact paired with Demario Davis. While the Saints are hopeful either of Pete Werner or Zack Baun step up to start next to Davis, being highly-drafted linebackers with high expectations, bringing three viable options into training camp would be better than two. Stay tuned for updates.