Mississippi State vs Tulsa. The 10 ten things you need to know about the MSU win over Tulsa in the Lockheed Martin Armed Forces Bowl 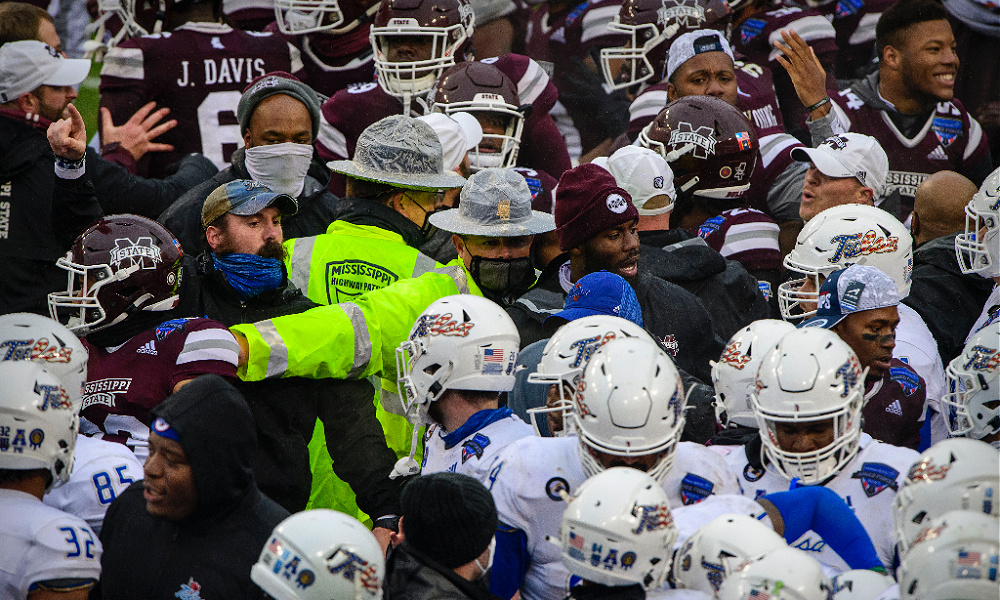 Mississippi State vs Tulsa. The 10 ten things you need to know about the MSU 28-26 win over Tulsa in the Armed Forces Bowl.

The second-best team in the American Athletic Conference lost to the 10thish best team in the SEC. In terms of national perception, baked-in biases, and being given the benefit of the double by the College Football Playoff committee, this was one of those games that will be referred to and brought up every time there’s a Power Five vs. Group of Five debate.

No pressure, but it would be huge deal if Cincinnati could rock Georgia in the Chick-fil-A Peach Bowl.

9. The good game will be remembered now for that fight

Of course there’s no place for that ugly, ugly brawl after the game.
That was as bad and as brutal a fight as you’ll see in a football fight as the two teams went at it after the post-game handshakes.

It’ll all come out later what really happened, but that can’t happen ever no matter how high emotions run. There were punches, there was kicking, there was more to this fight that goes beyond the every-once-in-a-while shoving matches.

A massive brawl broke out at the end of the Lockheed Martin Armed Forces Bowl between Tulsa and Mississippi State. pic.twitter.com/zfaq912SWU

8. It was an entertaining game, but …

Between the fight, the lousy weather – a nice mix of rain and sleet and snow – the 18 combined penalties, the lack of a steady Mississippi State offense – this wasn’t the prettiest of bowl games. However, it was the first bowl win for the program since taking down the 2017 TaxSlayer, and it was Mike Leach’s second bowl win in the lsat five games and third since 2007.

Yeah, it wasn’t anything aesthetically pleasing, but any bowl game you can win is a good one.

7. Will Rogers keeps on building, but …

He’ll have to be sharper to earn the Mississippi State starting quarterback job next year. It was a promising true freshman season, and he didn’t make any big mistakes against Tulsa to go along with a rushing touchdown, but he didn’t hit any big downfield throws in the bad weather.

There was just enough of a running game to take over at times – the 123 yards marked the second straight 100-yard rushing day – but for the Mike Leach offense to shine, the quarterback and passing game have to be great.