Stetson Bennett wins the Burlsworth Trophy, awarded to the best player in the nation to have started their career as a walk-on. 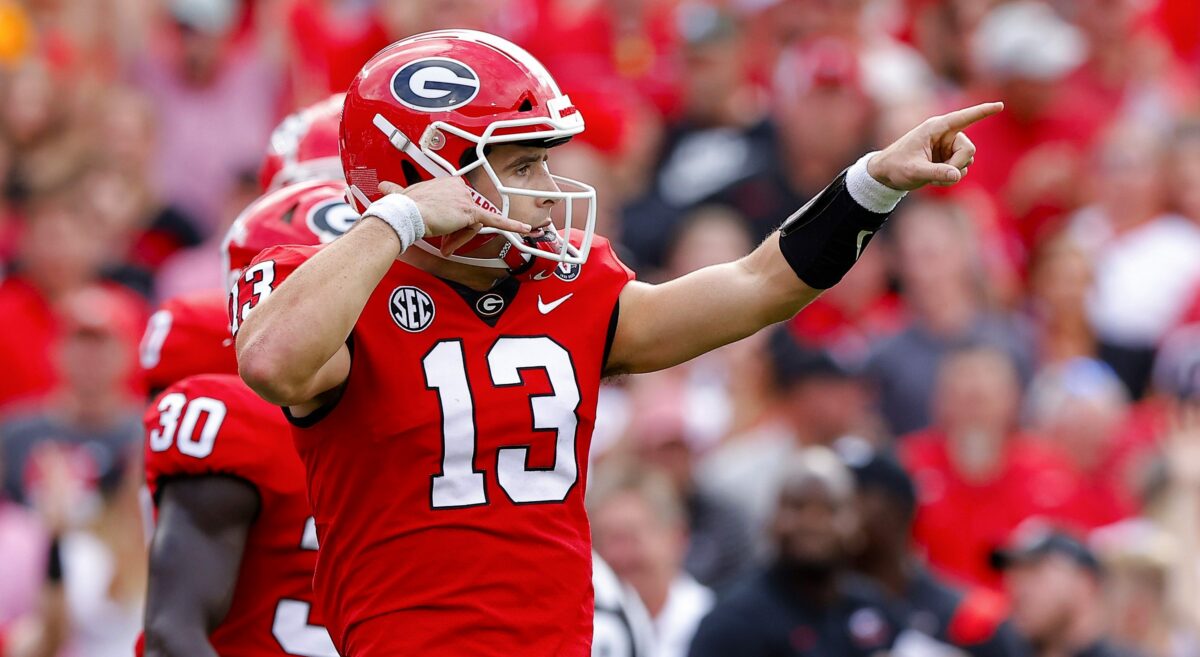 In addition to being named a finalist for the 2022 Heisman Trophy on Monday night, Georgia quarterback Stetson Bennett was named the winner of the Burlsworth Trophy.

Bennett arrived at Georgia in 2017 as a walk-on from Pierce County High School in Blackshear, Georgia. He would later transfer Jones County Junior College in 2018 and then return to UGA as a member of the 2019 signing class.

He made his first career start in 2020. The next year, he took advantage of an injury to JT Daniels, became the starter and never looked back. Bennett brought Georgia its first national championship since the 1980 season and is looking to win it all again this season.

So far this year, with at least one game left on the slate, Bennett has thrown for 3,425 yards and 20 touchdowns and has rushed for an additional seven scores.

Bennett is Georgia’s first recipient of the Burlsworth Trophy.

Stetson is a Damn Good Dawg. 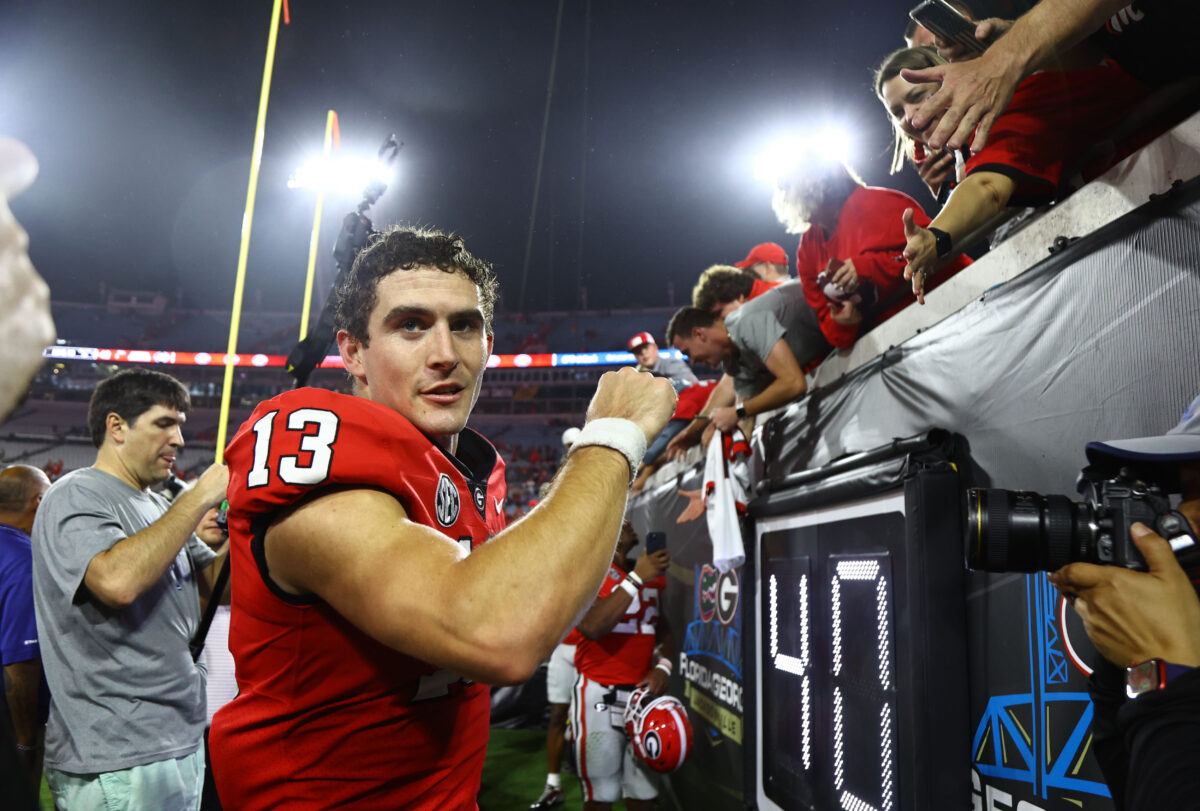 On Monday night, Georgia quarterback Stetson Bennett was named a finalist for the 2022 Heisman Trophy.

Bennett, a former walk-on, was not the most popular selection for the award. Considered a “game manager” by college football fans, many thought there were better options for the game’s most prestigious award.

Bennett, who is looking to win his second national championship as a collegiate starter at the University of Georgia, now has a chance to add some hardware to his growing collection.

“I don’t even know what to think right now. We have a lot of good players who make me look good. It’s special, This honor is all about my teammates and this team. I wouldn’t be here if we didn’t have the team that we have. This honor is for them. I understand what Coach Smart means when he says that success comes to those who don’t look for it or are too busy working to look for it. I have never thought about the Heisman. I just wanted to play quarterback at Georgia. I just wanted to play football. I’m thinking of the players and people who have been in this with me. Regardless of who wins, it’s a huge honor to be in this group. The wideouts, tight ends, running backs, offensive line, defense, coaches – I wouldn’t have this opportunity without them so a ton of gratitude for them.” — Stetson Bennett

Bennett’s numbers may not scream “Heisman,” but what he brings to the table sure does. All the guy does is win football games, and he just guided Georgia to its second consecutive undefeated regular season and its first SEC title since 2017.

Bennett has thrown for 3,425 yards and 20 touchdowns and has rushed for an additional seven scores this season. And he’s not done yet.

Stetson is a Damn Good Dawg.

Alabama offensive tackle Tommy Brockermeyer enters transfer portal after two seasons with the program. He was a five-star coming out of high school.

Brockermeyer signed with the Tide as a part of the 2021 recruiting class. He chose the Tide over his father’s alma mater: Texas. His brother, Blake, also played as a linebacker for the Longhorns.

Brockermeyer played sparingly in his two seasons in Tuscaloosa. He saw action in just two games at Alabama.

His twin, James, also signed with the Tide as a part of the 2021 recruiting class. He has not announced that he will be entering the transfer portal at this time.

A destination to keep a close eye on is Texas as head coach Steve Sarkisian was another key reason why the twins chose the Tide over the Longhorns coming out of high school.

Roll Tide Wire will continue to follow Alabama football news as it pertains to the transfer portal.

Oklahoma is looking to add to their wide receiver ranks with offers to a couple of transfer portal wideouts, RaRa Thomas and Dante Cephas. From @john9williams 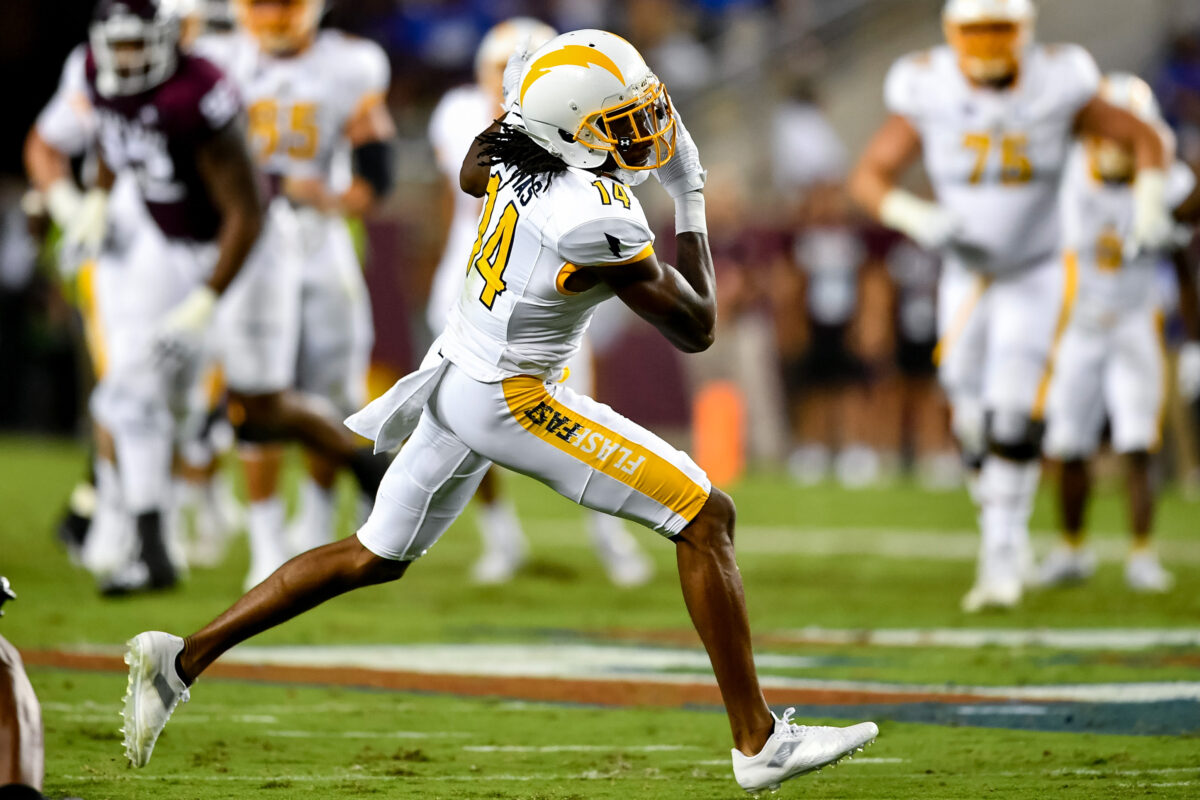 As the transfer portal officially opened on Monday, the Oklahoma Sooners saw some depth walk out the door. Mostly, it’s been players that saw little to no playing time for Oklahoma in 2022, but at wide receiver, they’ve seen a bit more attrition.

With the college football world doing some portal shopping, it looks like the Sooners are targeting a couple of wide receivers early in the process. Oklahoma offered Mississippi State transfer wide receiver [autotag]RaRa Thomas[/autotag] and Kent State wideout [autotag]Dante Cephas[/autotag].

Cephas had four receptions for 50 yards against Oklahoma in week two of the season, but his high moment came against Ohio, where he posted 13 receptions for 246 yards and a touchdown.

Thomas posted 5 receptions for 134 yards and a touchdown in a win against Texas A&M, went for 8 and 73 against Alabama, and recorded six catches for 84 yards and two touchdowns against Auburn.

Though [autotag]Marvin Mims[/autotag] is playing in the bowl game, there’s a strong possibility that’s his last for the Sooners with an NFL draft decision looming. If Mims were to declare for the draft, that would leave Oklahoma with [autotag]Jalil Faroo[/autotag]q and [autotag]Drake Stoops[/autotag] as the only Sooners wide receivers to play significant snaps in Norman.

The Sooners added [autotag]J.J. Hester[/autotag] and [autotag]L.V. Bunkley-Shelton[/autotag] in the portal late last spring, but they didn’t see the field much, so it’s difficult to know where they stand with the coaching staff. Both have experience from their previous stops and have playmaking ability, but Oklahoma would be wise to add some more depth.

We’ll see if Oklahoma’s able to close on either Cephas or Thomas, but it’s clear they believe they need to add some wide receiver depth in the portal this offseason to put them in a better position to contend in 2023.

Bowl season has no shortage of must-see matchups. 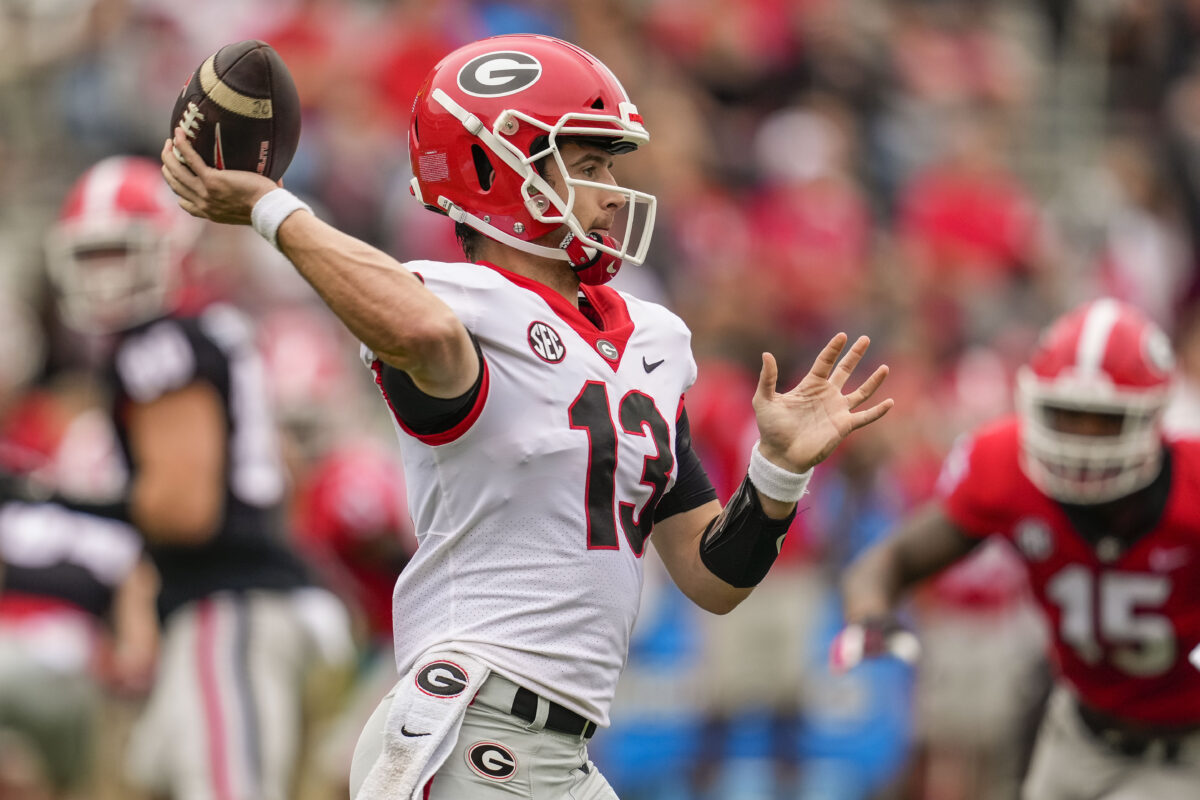 The 2022 college football regular season stale has come to an end as we officially gear up for postseason play.

43 bowl games are set to take place from the Bahamas Bowl on Dec. 16 all the way to the CFP National Championship on Jan. 9.

The College Football Playoff semifinals will take place at the Fiesta Bowl and Peach Bowl this year, with the title game being held in Los Angeles.

All eyes will be on No. 1 Georgia as they take on No. 4 Ohio State and No. 2 Michigan vs. No. 3 TCU. Georgia looks to repeat as national champs while the other playoff squads try to dethrone the Bulldawgs.

This bowl season has no shortage of must-see matchups. Here is a list of the 10 most exciting 2022 bowl games. 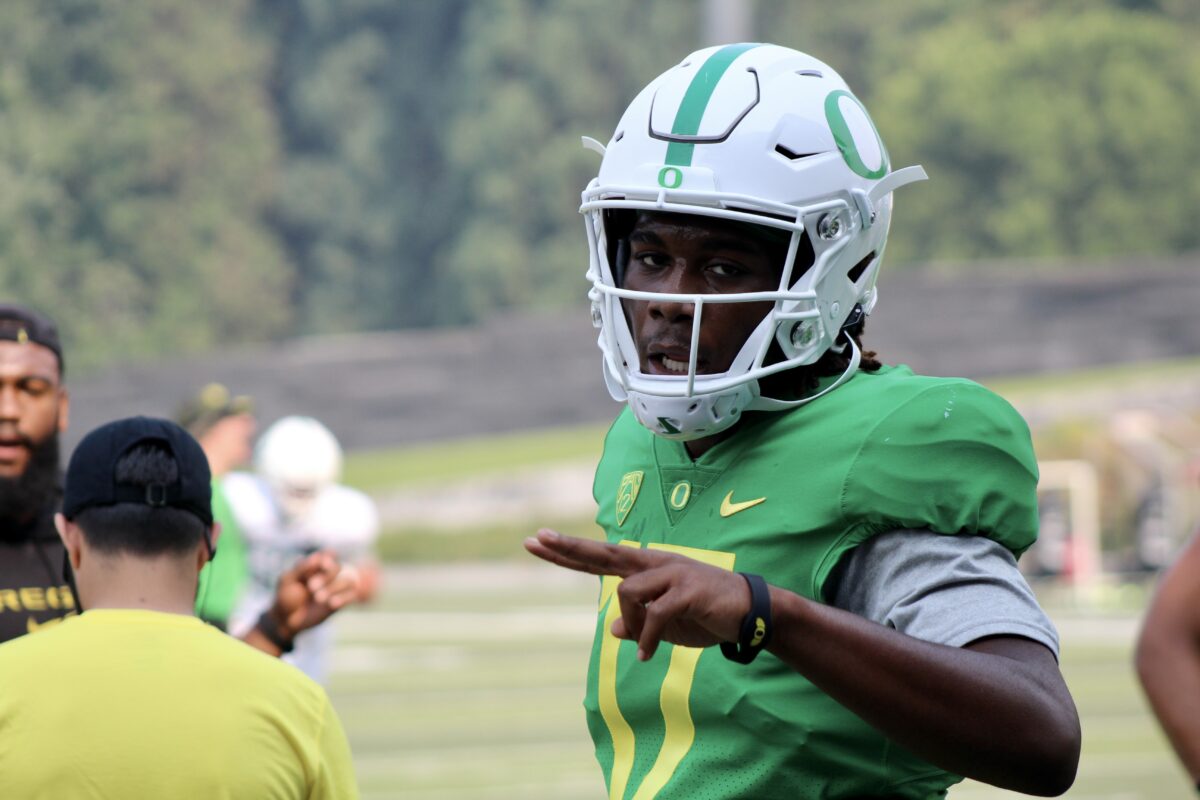 Add linebacker Jabril McNeill to the list of Ducks who have decided to look for more playing time elsewhere. The sophomore from Raleigh, NC played in all 14 games last season, mostly on special teams, but only made an appearance in three games in 2022.

Given the fact he wasn’t playing much and he was so far away from home, it’s not really a surprise to see McNeill enter to portal and look for greener pastures at another school.

It’s pure coincidence that the former 4-star recruit from North Carolina leaves just before the Ducks are set to play the Tar Heels in the Holiday Bowl Dec. 28.

Monday was a busy day for the transfer portal headlines, which was to be expected. Penn State had a handful of players officially have their names entered into the NCAA’s transfer portal database to begin evaluating their potential options. Cornerback [autotag]Jeffrey Davis Jr.[/autotag] announced on his Twitter account he was among those having his name added to the transfer portal on Monday.

The former three-star recruit from Connecticut joined the Penn State program in the Class of 2021. He will have three years of eligibility remaining wherever he may end up next. Davis committed to Penn State over offers from Boston College, Michigan, Connecticut, and Princeton.

“This was a very tough decision to make but after discussing it with my family, we decided it would be in my interest to enter the transfer with 3 years of eligibility left,” Davis announced in his social media posting on Monday. 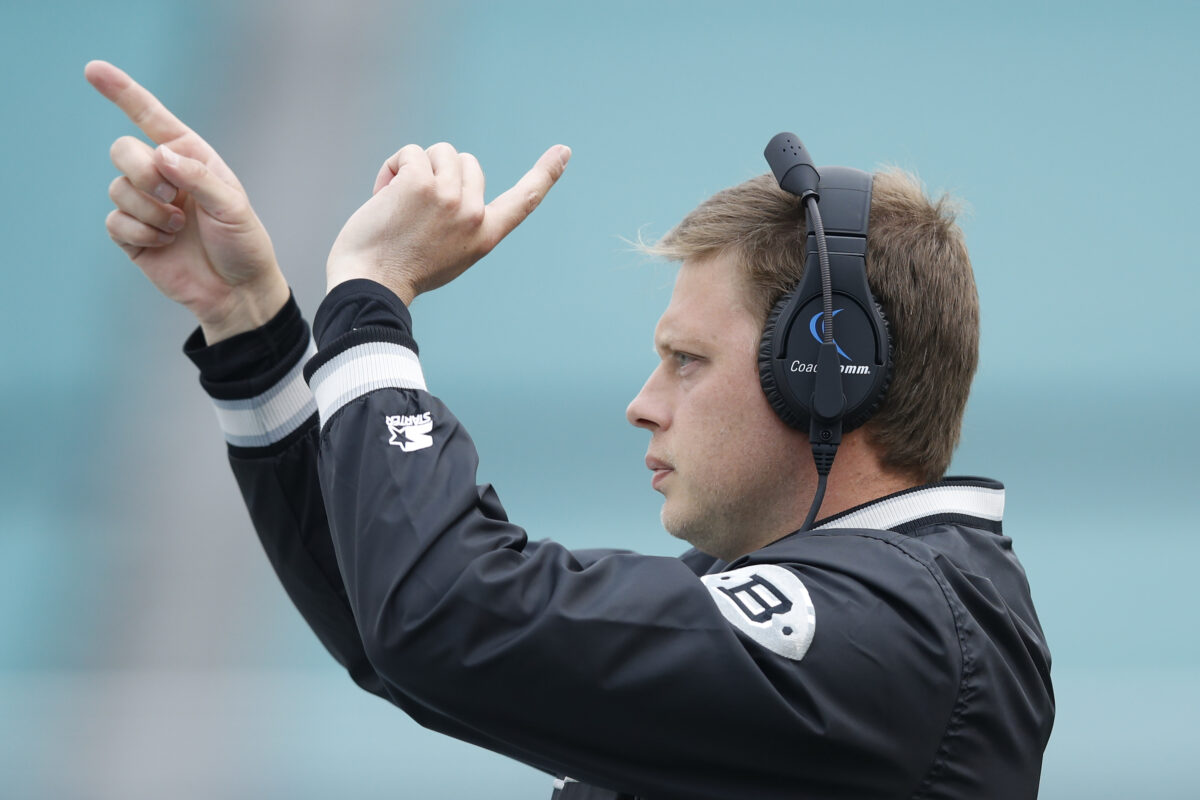 The news comes days after the Blazers announced that they were hiring NFL quarterback guru Trent Dilfer as their next head coach.

Mortensen had two different stints at Alabama. The son of NFL insider Chris Mortensen originally joined the staff as a graduate assistant in 2014. He would remain with the team until 2018 when he was hired to be the wide receivers coach for the Birmingham Iron of the American Alliance Football League.

After the league ended after just one season, Mortensen returned to Alabama to be an analyst. He spent the next four years as an analyst on Nick Saban’s staff.

Now, the former Arkansas quarterback will be able to call his own plays as UAB’s offensive coordinator. It will be interesting to see how he fairs in a larger role at a new program.

Roll Tide Wire will continue to follow Mortensen’s coaching career as well as other former Nick Saban assitants that coached at Alabama. 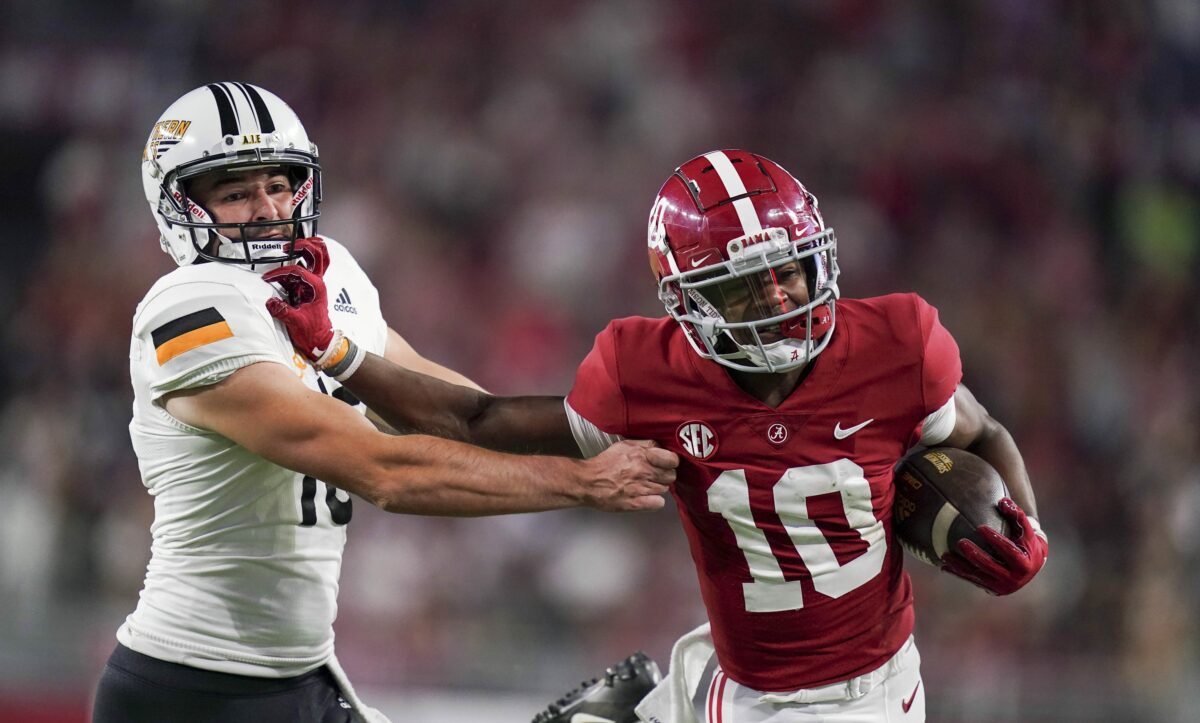 Alabama wide receiver JoJo Earle has reportedly entered the NCAA transfer portal, according to Matt Zenitz of On3 Sports.

Earle joined the Crimson Tide as a 4-star prospect in the 2021 recruiting cycle. He is originally from Texas and held offers from other prominent programs such as LSU, Georgia, Michigan, USC and others.

A once-promising star on the rise in Tuscaloosa that had been compared to the likes of Jaylen Waddle will likely be continuing his collegiate career elsewhere.

No reason as to why he entered the portal has been made public.

McGraw will have three years of eligibility to use wherever he ends up next. McGraw was a three-star addition in Penn State’s Class of 2021. With a pretty well-stocked defensive line, playing time was and would appear to be difficult to come by for McGraw.

McGraw made his intention to enter the transfer portal public on Sunday with a message posted to his Twitter account.

Thank you Penn State for an incredible experience. I learned a lot playing for Coach Scott and Franklin. I’m extremely appreciative of my time in Happy Valley. I believe it’s in my best interest to enter the transfer portal at this time. With 3 years of eligibility remaining. pic.twitter.com/oHCo4sCCsD