Jalen Ramsey with an amazing pick for the Los Angeles Rams 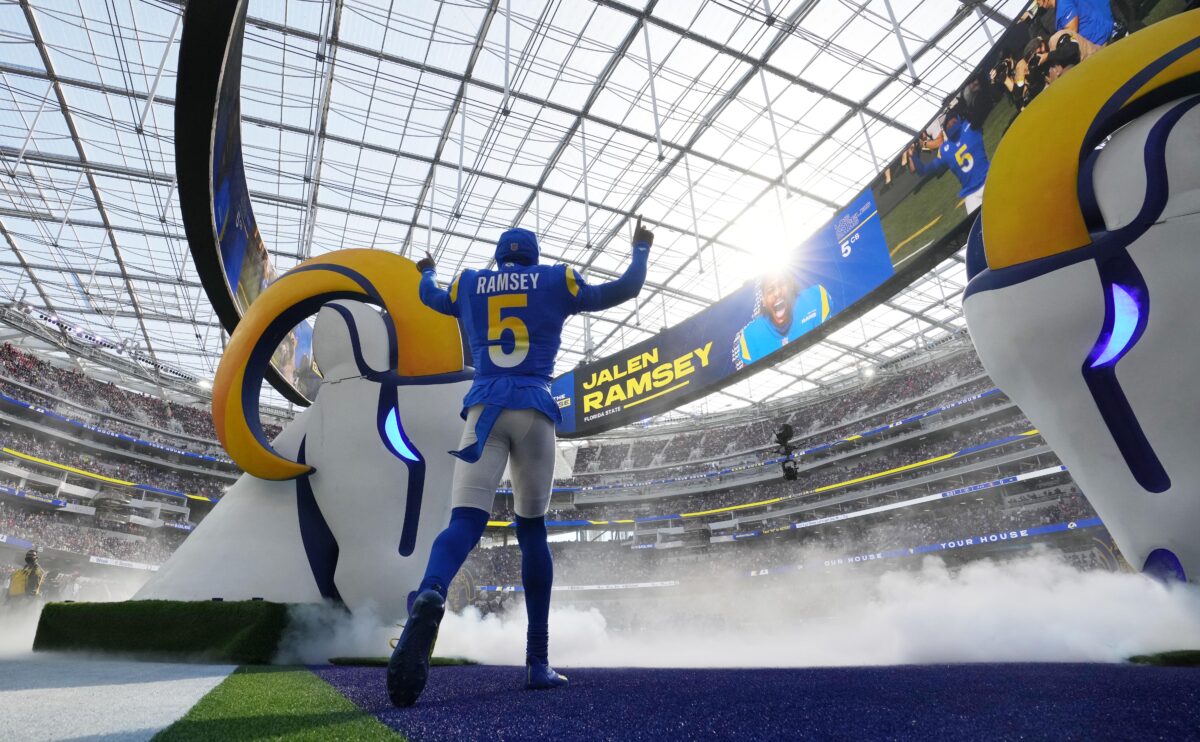 The Rams were reeling in the second half. Their offense had flatlined. The defense was being eaten up by the San Francisco 49ers.

They desperately needed a big play but it seemed unlikely as the 49ers were marching toward a go-ahead score in a 17-17 game.

The All-Word cornerback made his 15th career interception a spectacular one, juggling it before corraling the ball in the end zone.

He got up and returned it to the 10 rather than staying put and getting a touchback.

It was still a remarkable play.

There were all sorts of playoff implications on the line as the NFC games in the late-afternoon window were coming to a close. 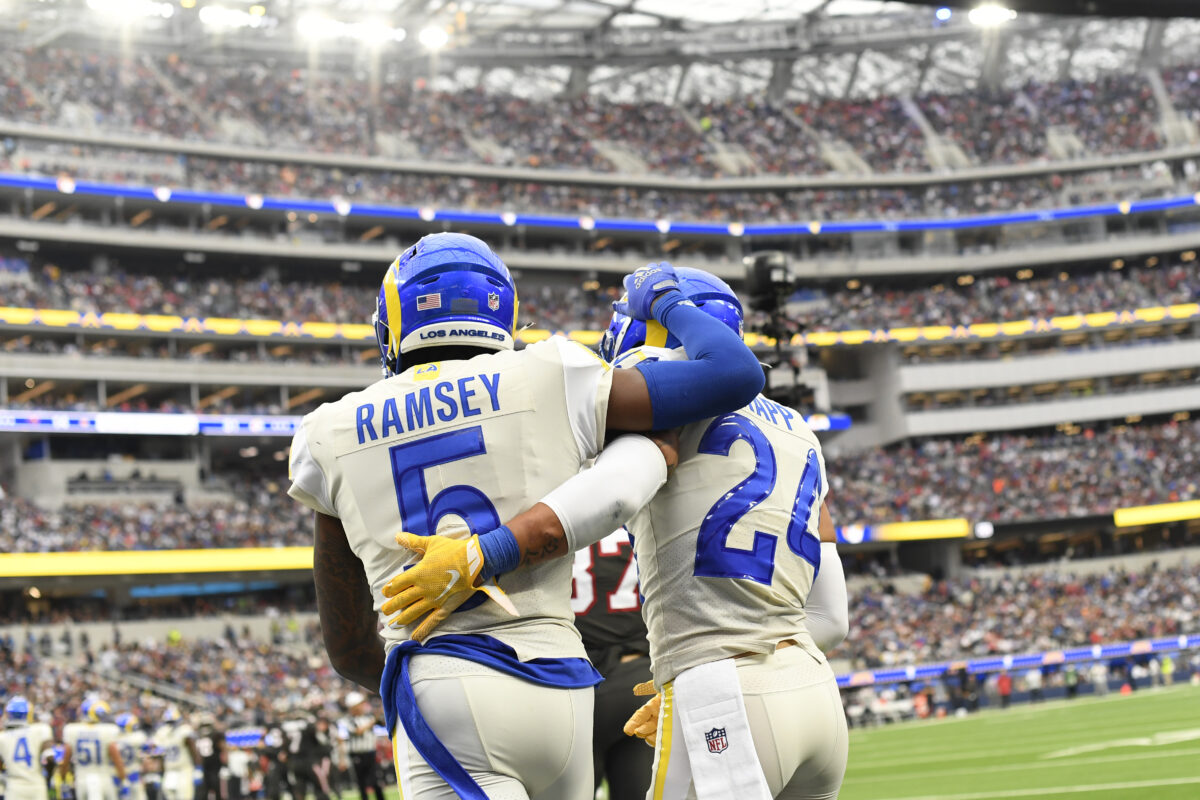 The Los Angeles Rams’ secondary got into a battle — with each other — early in the game Sunday against the Baltimore Ravens.

Jalen Ramsey and Taylor Rapp had some sort of disagreement, which led to hands being thrown at each other.

FOX Sports is doing the game and Pam Oliver reported Rapp and Ramsey stayed far apart from each other when the defense went to the sidelines.

The broadcast just showed Taylor Rapp staying away from the position group when the DBs were just on the sideline, as Raheem Morris tried to talk to him. Seems ot be a good amount of tension there. 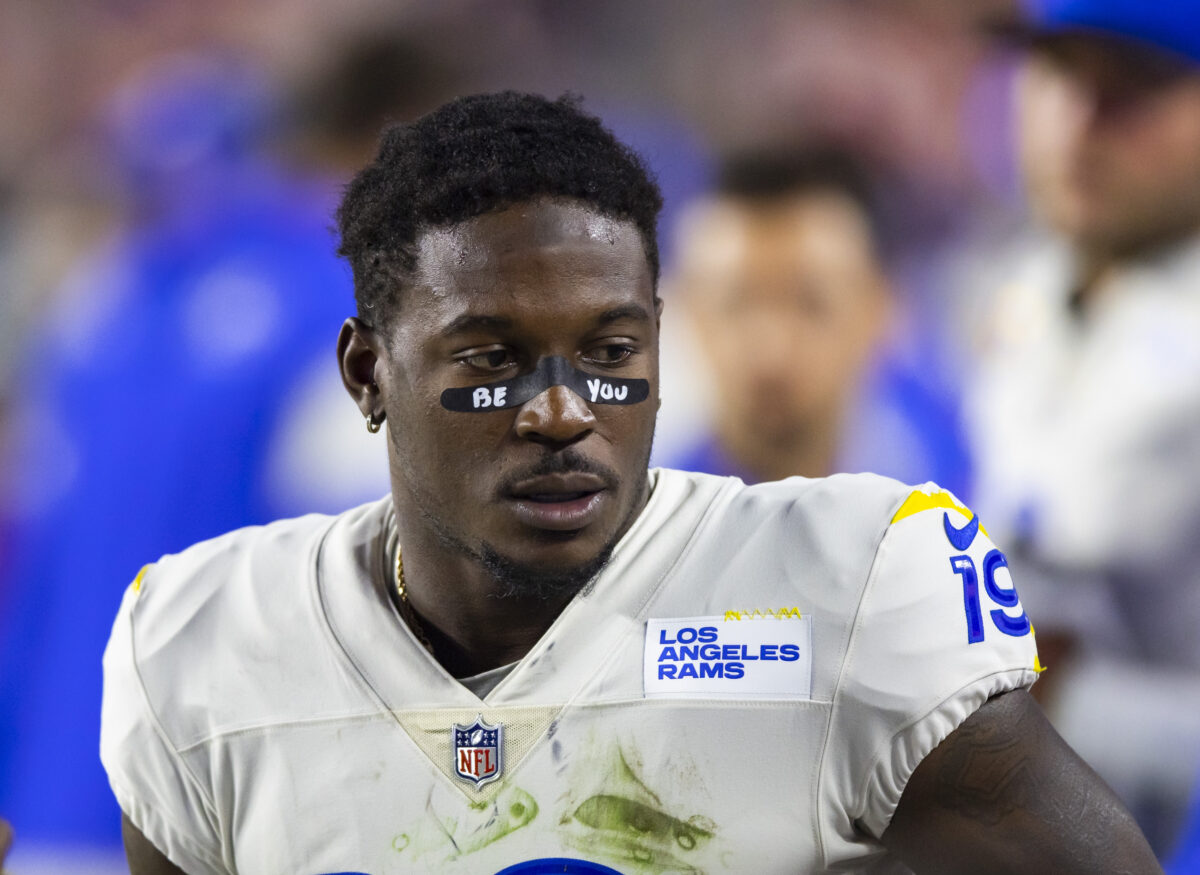 The Los Angeles Rams are getting help from everywhere else as Matthew Stafford is having a rough game Sunday against the Minnesota Vikings.

Stafford has thrown three interceptions, the last allowing Minnesota to score a TD on a short drive to close within 13-10 in the third quarter.

However, special teams delivered for the Rams as Brandon Powell took a punt back 61 yards for six points as the lead grew to double digits once again in the third quarter.

Brandon Powell with a HOUSE CALL on the punt return! #RamsHouse

This was the second punt return for a TD in NFL 2021. The other came from the Bears’ Jakeem Grant. 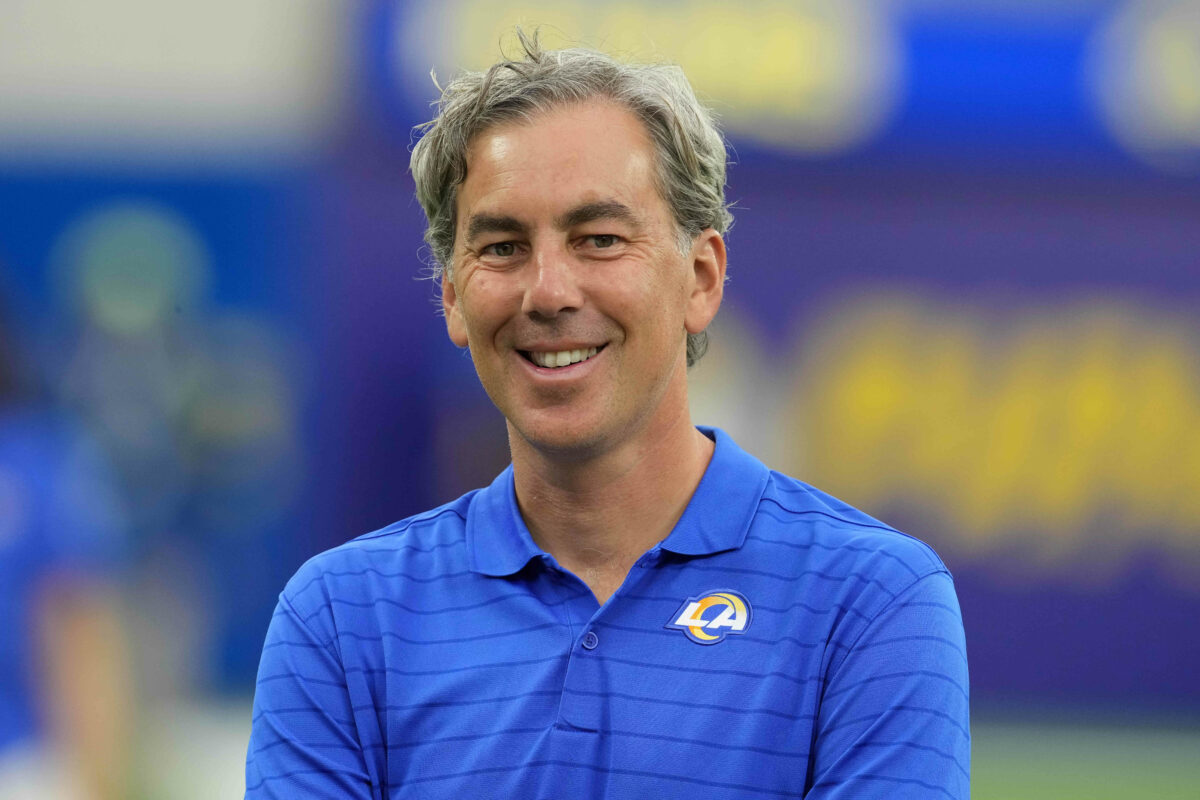 Brittanybets posted a tweet Saturday for her 2,700-plus followers that asked the Rams for help with her boss because the Rams’ game with the Seahawks was moved to Tuesday.

And the pre-Christmas dream came true as Demoff responded in the kindest and most wonderful of fashions.

Brittany, happy to write you a letter to your boss explaining your are needed @SoFiStadium on Tuesday to help @RamsNFL potentially clinch a playoff spot…any other fans who need it let me know as well. https://t.co/SOGSOwnEbB 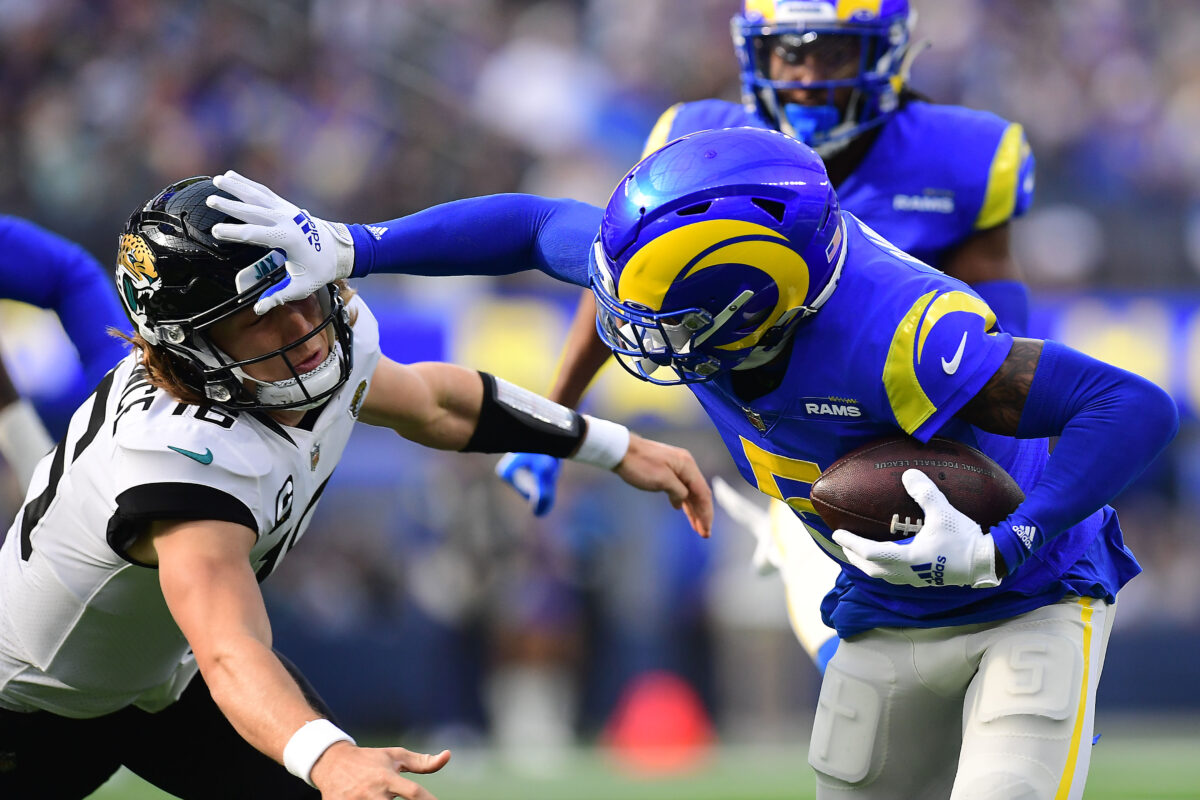 The Los Angeles Rams’ task in their huge NFC West battle with the Arizona Cardinals took a sour twist on Monday.

The Rams will face the division leaders without their elite DB Jalen Ramsey and TE Tyler Higbee.

The loss of Ramsey is critical as he is arguably the best DB in the NFL and would have played a major role in diminishing passing options for Arizona and Kyler Murray.

Higbee has 44 catches for 395 yards with a trio of touchdown receptions in 2021.

St. Louis, the NFL and the Rams have reached an agreement on the city’s relocation suit 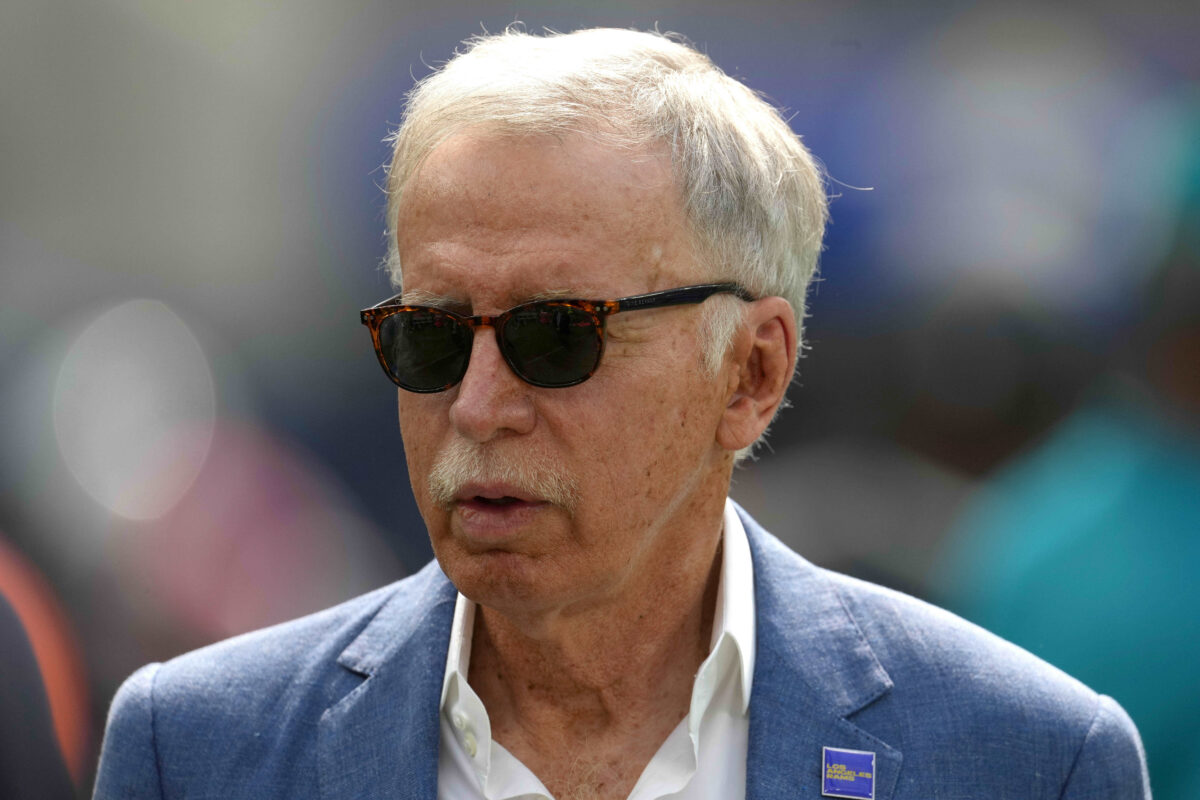 The four-year drama between St. Louis, the Rams, and the NFL has come to a conclusion.

Stltoday.com reported Wednesday the parties have agreed to a $790M settlement in the case sparked by the team’s move from St. Lous to Los Angeles.

Sources: $790 million settlement reached in Rams relocation lawsuit https://t.co/f6S7FUCQ09 (By @Ben_Fred and me)

The city, county and dome authority filed the civil suit against Kroenke, the Rams, the league and its owners in 2017, alleging the league broke its own relocation rules that were established decades ago to avoid antitrust liability.

Rams lose Robert Woods for the season to a torn ACL 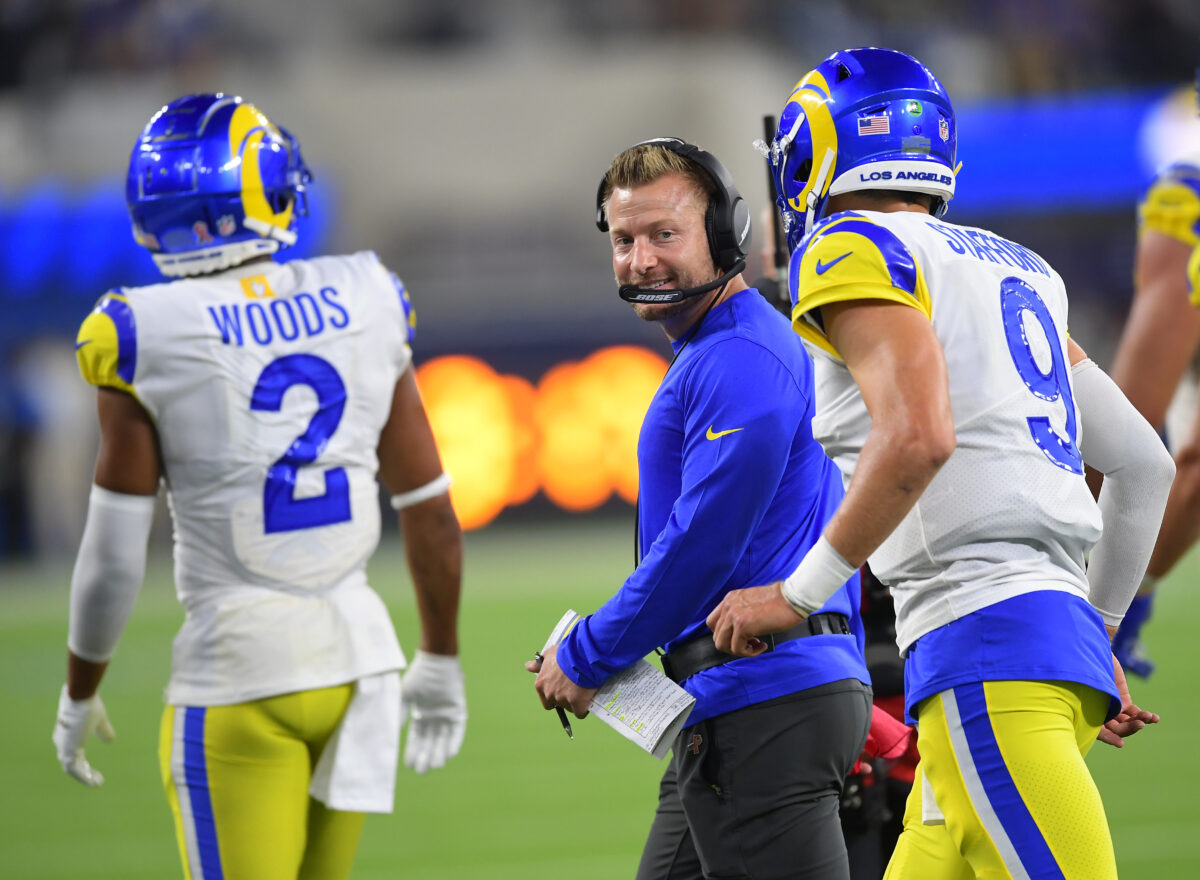 The Rams lost one of their star wide receivers, Robert Woods, who tore his ACL during practice.

Robert Woods hurt his knee at practice Friday. He went down, got up, finished practice, conducted interviews with the media after, nobody thought anything wrong…and then tests discovered later that he tore his ACL, per sources.

Robert Woods’ injury happened at Friday’s practice. He ran a jet sweep on air. Planted his foot and felt something awry. There was hope last night it wasn’t as serious as feared. Alas, it’s a torn ACL.

There’s no clearly dominant team in the AFC right now, but even without Derrick Henry, the Titans have a defense that could set them apart. 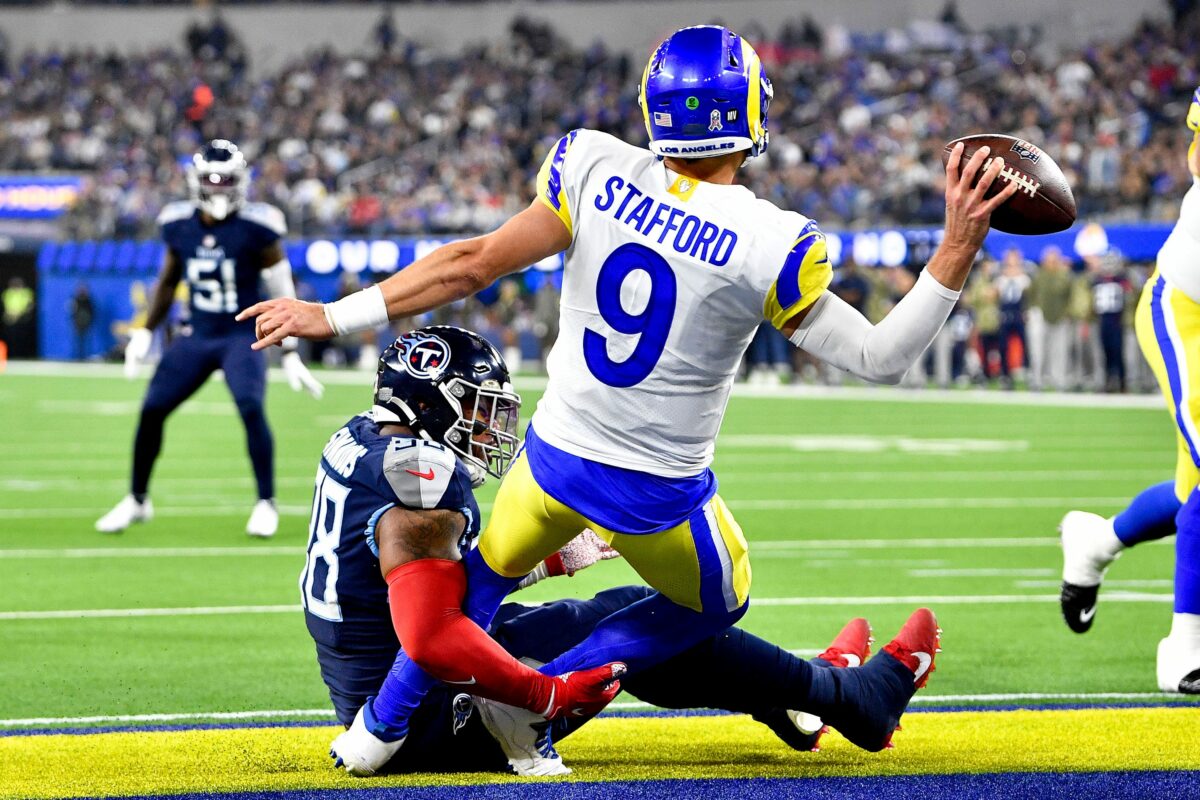 The Tennessee Titans were going to be up against it when they faced the Rams last Sunday night, or so it seemed. They were without Derrick Henry, the foundation of their offense as very few running backs have been in the modern era, and given the severity of Henry’s foot injury, that absence could last until the end of the regular season, or even through however far Tennessee makes it through the postseason.

Not great news for a 6-2 team that had the AFC’s top seed, but could easily lose it with a slide that might have started against a Rams offense that was averaging 30.6 points per game through Week 8, and was led by a quarterback in Matthew Stafford and a head coach in Sean McVay who were demolishing enemy defenses with as multi-faceted a passing game as there’s been in the NFL. Asking Titans quarterback Ryan Tannehill to keep up with that with Henry out of the picture was a lot. Especially with a defense that came into the Rams contest ranked 20th in Defensive DVOA.

Tannehill played decently in the Titans’ surprising 28-16 win, completing 19 of 27 passes for 143 yards, one touchdown, and one interception, but if there’s one thing we know about Tannehill at this point, it’s that he’s the kind of quarterback who will go exactly as far as scheme and surrounding players will take him. There was no way for Tannehill to compete with Stafford unleashed in the Rams’ offense, so the thought was that the Titans, and specifically offensive coordinator Todd Downing, would have to scheme things up something fierce to get around that limitation. The common perception was that the defense would not do much to help.

It was an earned perception. The Titans ranked 29th in Defensive DVOA last season, and as late as Week 6 of the 2021 campaign, they ranked 28th. Then, things started to turn around rather dramatically. In Week 7 against the Chiefs’ busted offense in a 27-3 win, the Titans limited Kansas City to fewer than 10 points for the first time in the Patrick Mahomes era. Defensive lineman Denico Autry knocked Mahomes out of the game with one of his to sacks, and the score was 27-0 at halftime. Against the Colts in a 34-31 Week 8 overtime win, they took advantage of Carson Wentz’s proclivities for “improvisation” with two interceptions in the last eight minutes of the game.

And then, the masterstroke against the Rams. Over the last four weeks, in wins over the Bills, Chiefs, Colts, and Los Angeles, the Titans have the NFL’s fourth-best defense by DVOA behind only the Cardinals, Rams, and Saints. They’ve gone from 20th to 10th overall in Defensive DVOA in that time, and improved to eighth against the pass. They landed four players on Touchdown Wire’s midseason All-Underrated defense (Autry, interior defensive lineman Jeffery Simmons, edge-rusher Harold Landry, and safety Kevin Byard), far more than any other team.

If they can keep this up, it might not matter whether Derrick Henry is in the game or not.

How did the Titans improve so quickly on the defensive side of the ball? There have been several burgeoning factors at play.

What number did Von Miller choose to wear as a Ram and whose permission did he seek for it? 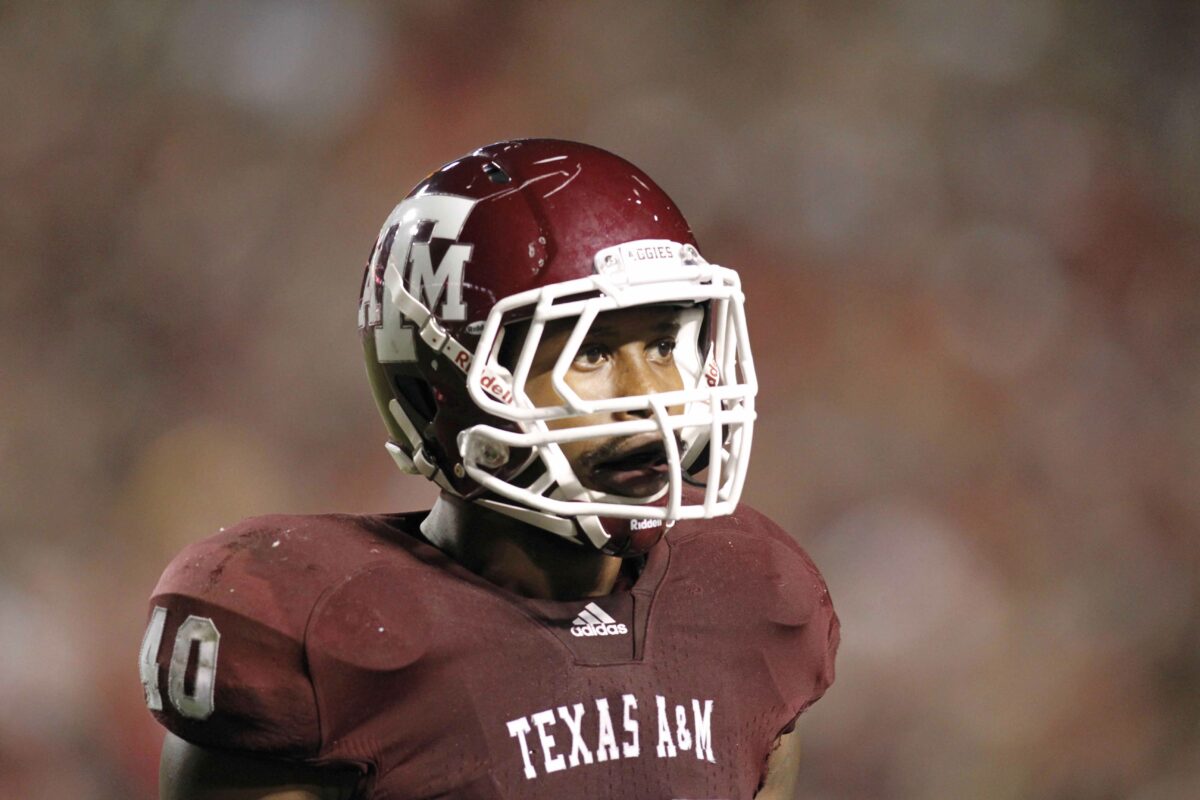 One benefit of being traded is you have the opportunity to get different digits.

Justin Hollins is wearing No. 58 for the Los Angeles Rams. You can’t change your number in-season.

That meant newly acquired Von Miller had to get creative when coming up with a jersey number for the team that acquired him on Monday.

Miller did some studying and found out the Rams’ No. 40 was worn by Elroy “Crazylegs” Hirsch, a College Football and Pro Football Hall of Famer.

Why would that number entice Miller? The former Denver Bronco wore No. 40 when he starred at Texas A&M in college.

He received the blessing from the family of Elroy Hirsch to wear No. 40, kindly asking permission before choosing that number. Hirsch is a Hall of Famer and one of the best receivers to ever play for the Rams.

Back in 4⃣0⃣@VonMiller receives blessing to wear the number from the family of Rams great, and Hall of Famer, Elroy "Crazy Legs" Hirsch 🙌 pic.twitter.com/yO3NgDaF7p

While Hirsch’s number wasn’t officially retired, Miller did the right thing. Crazylegs’ No. 40 is retired at Wisconsin, where he starred in college in 1941 and ’42 before entering the military service.

In January 1943, Hirsch enlisted in the United States Marine Corps and was transferred to the University of Michigan as part of the V-12 Navy College Training Program. 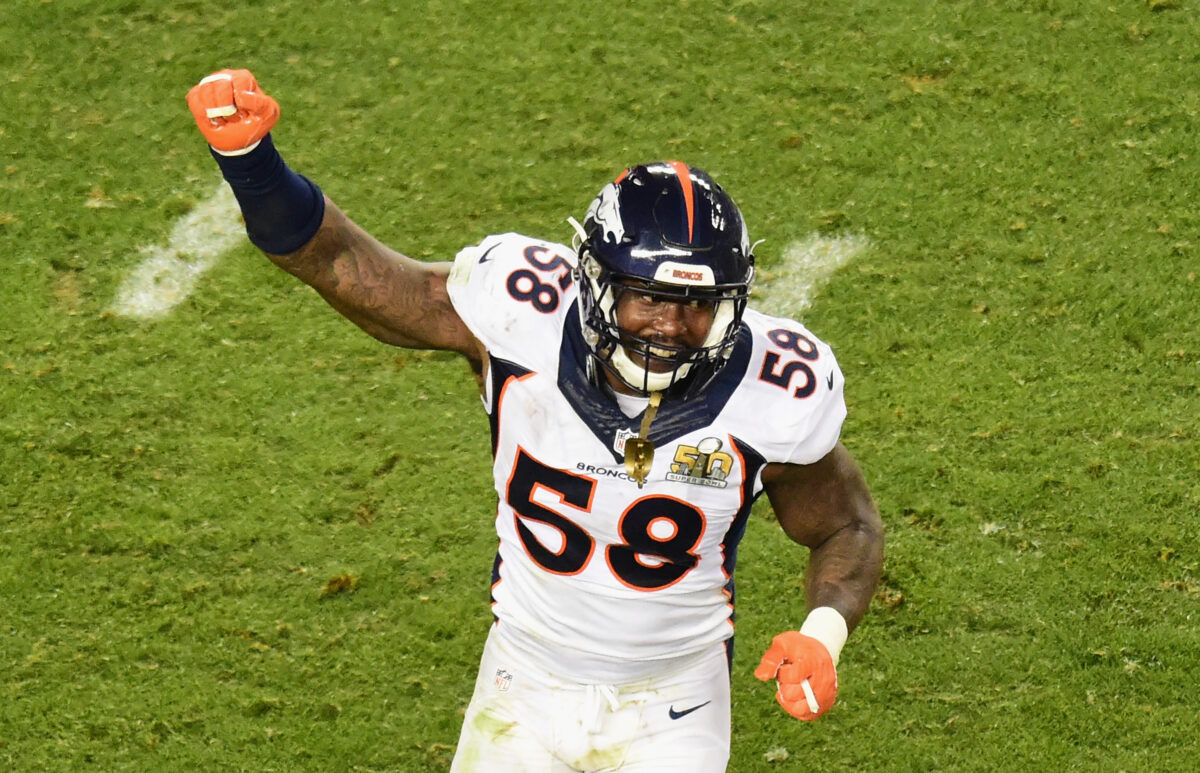 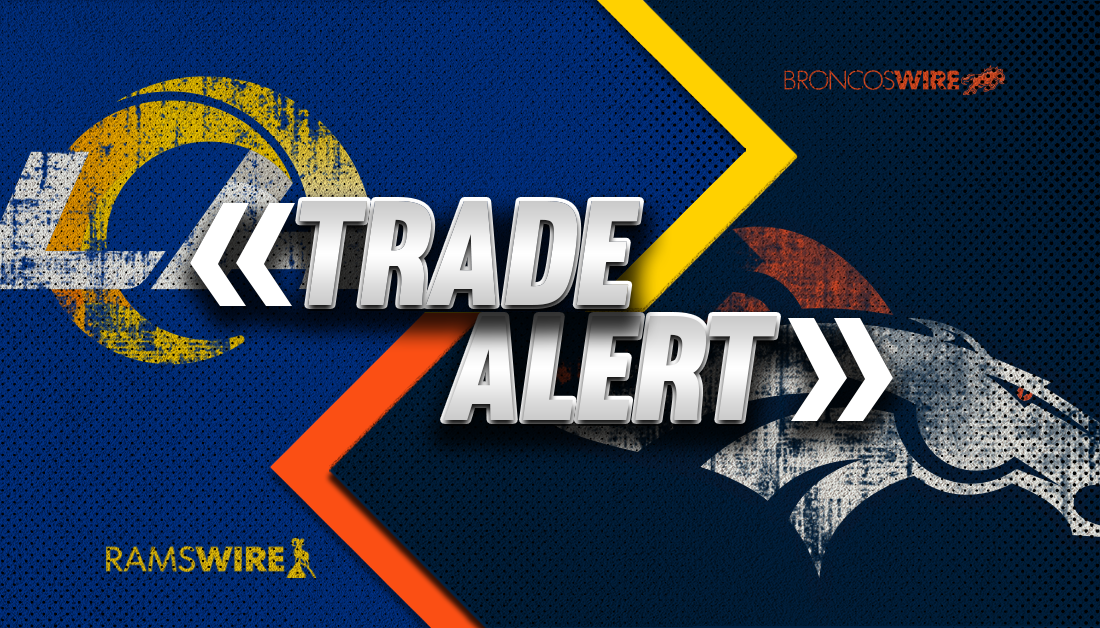 The Denver Broncos and Los Angeles Rams are putting the final touches on a blockbuster trade ahead of this year’s trade deadline.

According to ESPN’s Adam Schefter on Monday, the Broncos are sending All-Pro linebacker and face of the franchise, Von Miller, to the Los Angeles Rams.

According to KUSA-TV in Denver, the selections the Broncos are receiving in the trade are second and third round picks.

Schefter also reports that the Broncos will still be hanging onto a large portion of the 32-year-old’s salary:

As part of the trade, the Broncos are paying $9 million of Von Miller’s remaining $9.7 million salary, per sources.

Miller is slated to be a free agent following this season.

A first-round pick of the Broncos in 2011 at No. 2 overall, Miller has spent his entire career in Denver. He has been named a first-team All-Pro three times in his career and earned eight Pro Bowl nods, including the last six.

Just a day prior on Sunday, Miller did not play vs. Washington due to an ankle injury.

The NFL trade deadline is scheduled for Tuesday at 4 p.m.