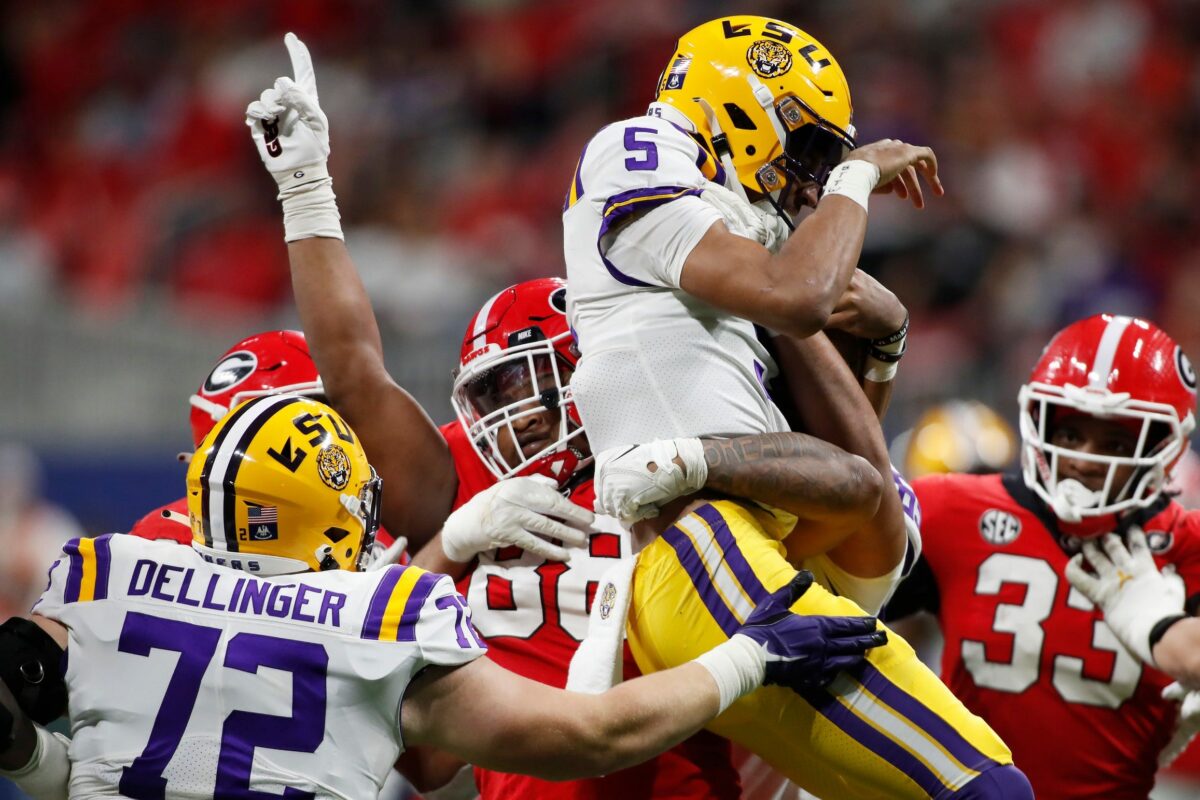 Before we get into how the voters for the Heisman Trophy finalists got wrong, we can say that the four finalists for the award, the winner of which will be revealed on Saturday, December 10, we want to make clear that we are not casting aspersions on any of the four players who did make the cut. USC quarterback Caleb Williams, TCU quarterback Max Duggan, Ohio State quarterback C.J. Stroud, and Georgia quarterback Stetson Bennett III all have certain attributes that make them worthy.

That’s not what we’re saying here. What we are saying is that there were other players who were as deserving — or more deserving — who didn’t make the cut, and that’s what we’re left to deal with. And it speaks to larger issues with the process.

Marquee players who are at times helped to a disproportionate degree by those around them are given credit for things that aren’t really theirs to own. The vote should be held after the end of the playoffs, so that we really know who the biggest dogs are. And it absolutely does not matter how great a defensive player you are. You are not going to win the Heisman on defense alone. Unless you’re a three-way superstar like Michigan defensive back Charles Woodson, who got the award in 1997 because he also balled out on offense and special teams, you might as well just wait for the money you’re going to get in the draft.

So. let’s get into what the Heisman voters got wrong this time around.

Utah overcame an early 17-3 deficit, and ran away with a 47-24 win over USC in the Pac-12 Championship Game 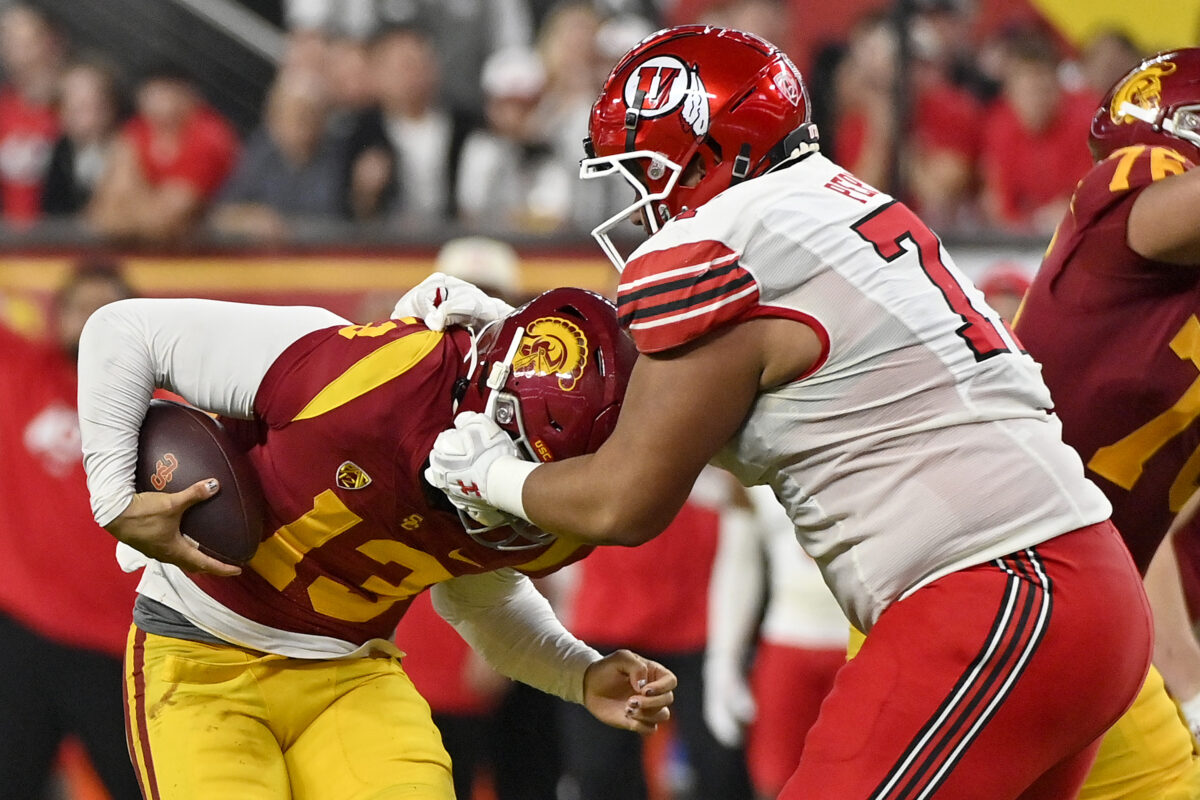 It was supposed to be the playoff-clinching party for USC, and a coronation for Heisman Trophy candidate Caleb Williams against Utah in the Pac-12 title game Friday night.

Instead, what started as a 17-3 deficit turned into a 47-24 blowout victory for the Utes.

Williams threw for 363 yards and three touchdowns, adding 37yards on the ground, but it wasn’t enough to overcome the furious comeback from Utah. The Utes scored a pair of touchdowns to tie the game just before halftime, and never let up as they pulled away in the fourth quarter.

Utah quarterback Cameron Rising threw for 310 yards and three scores of his own, while the Utes racked up 233 yards on the ground, averaging more than six yards per carry.

Williams should still lock up the Heisman, but this loss all but ensures the Trojans will fall out of the top four in the College Football Playoff rankings, opening the door for Ohio State or Alabama to sneak back into the fold. 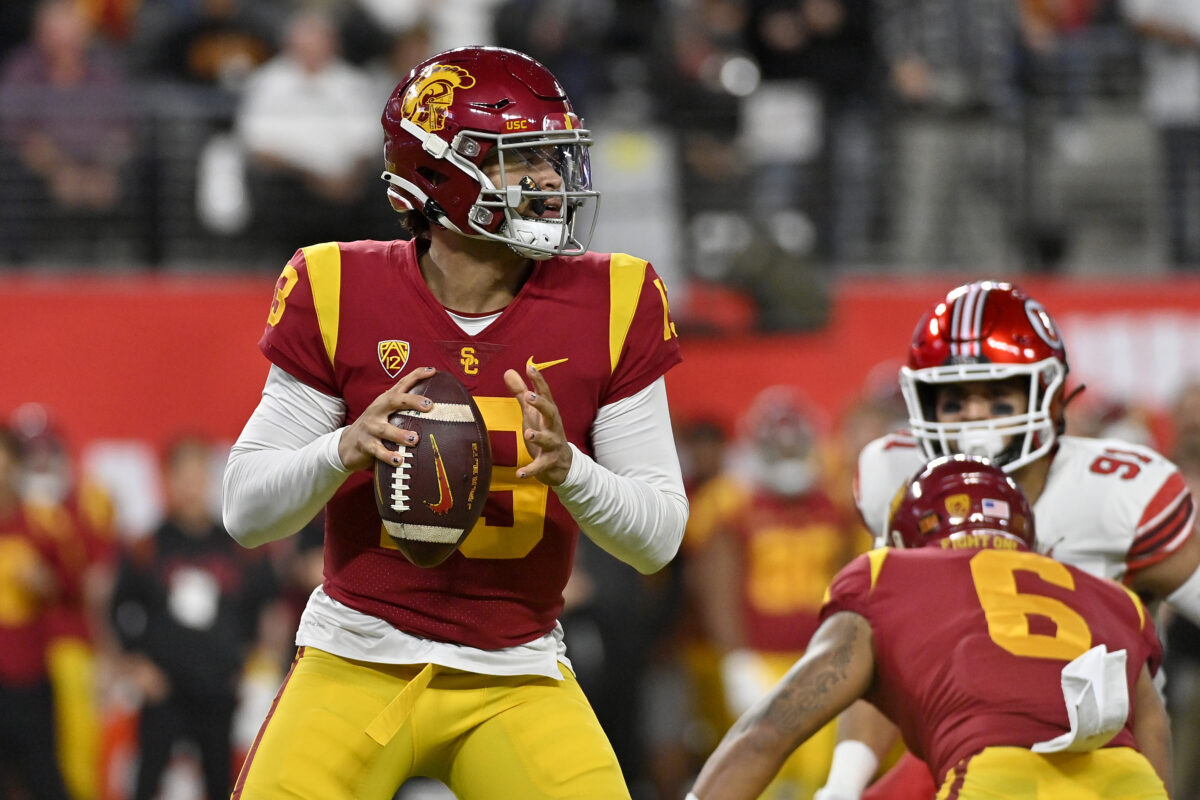 Caleb Williams at the half vs Utah:

It looks like he’s running away with this year’s Heisman Trophy, but USC quarterback Caleb Williams is also doing his best Trevor Lawrence impression when it comes to projecting his NFL draft future.

The highly touted transfer who followed head coach Lincoln Riley from Oklahoma to Hollywood, Williams has lived up to the hype this season, leading the Trojans to the Pac-12 title game. He’s put up some ridiculous numbers, accounting for over 4,000 yards of offense and 44 total touchdowns, with just three interceptions.

He’s got USC on the verge of clinching not just the conference title, but also their first trip to the College Football Playoff.

NFL teams are sure to be taking notice, too, even though Williams won’t be eligible to make the jump to the pros until 2024. He might not have the ideal size of a franchise quarterback, but Williams makes up for it in every other area of his game, with all the physical and mental traits to be a difference-maker at the next level.

Lawrence felt like the eventual No. 1 overall pick from the moment he set foot on the field at Clemson, and we might look back at Williams’ comeback win vs. Texas with the Sooners last year as a similar moment.

Right now, as Williams leads the Trojans to heights they haven’t seen in a while, he might also be convincing NFL decision-makers that he should be the easy pick at No. 1 overall in the 2024 draft. 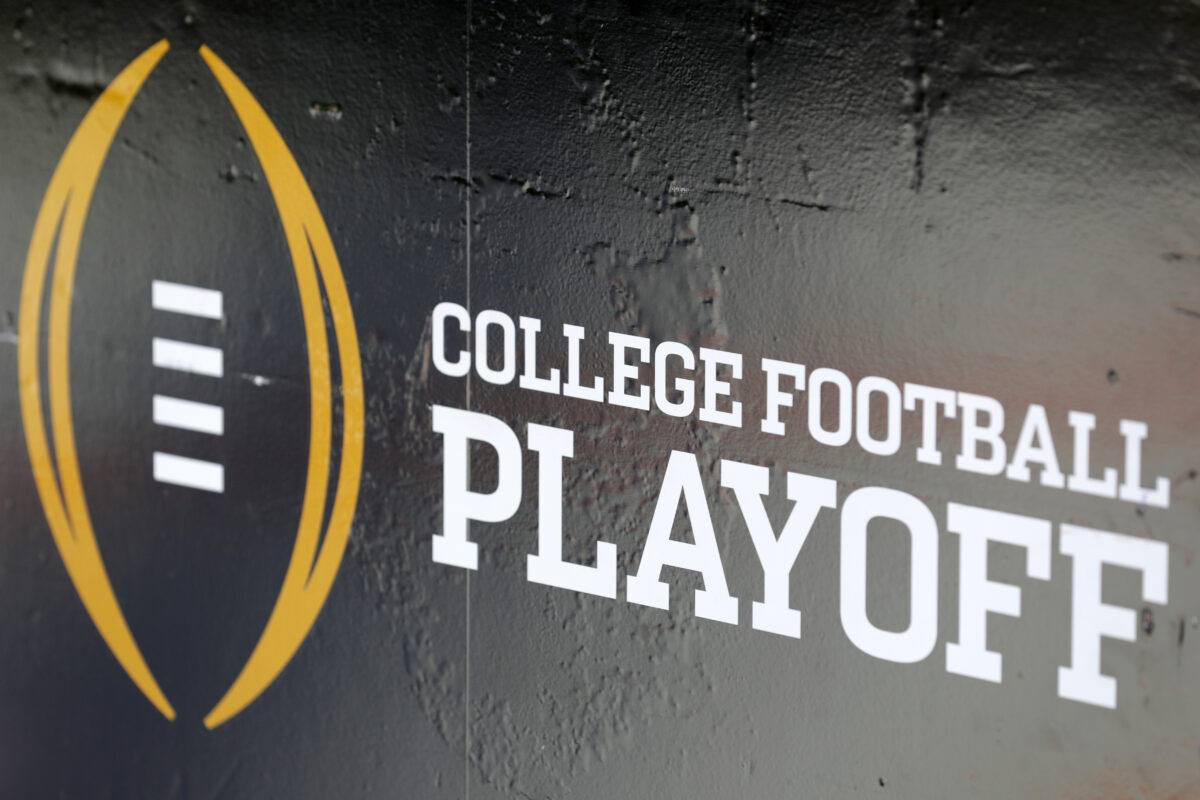 𝗢𝗙𝗙𝗜𝗖𝗜𝗔𝗟 𝗔𝗡𝗡𝗢𝗨𝗡𝗖𝗘𝗠𝗘𝗡𝗧: The College Football Playoff will expand to 12 teams beginning in the 2024-25 season!

The College Football Playoff will officially expand from four teams to 12 teams starting in 2024, the CFP committee confirmed Thursday.

After clearing the last remaining hurdle with their contract with the Rose Bowl, the postseason tournament will be expanding sooner than the original plan.

Here are the details, via the committee’s official release:

That means only two more years of the four-team playoff, and then we’ll only have to deal with everyone complaining about the 13th team that got left out.

This could have an impact on the draft world, as more top prospects who currently opt out of non-playoff bowl games could be less likely to skip those games, now that more teams will make the playoff and get a chance at a national title. 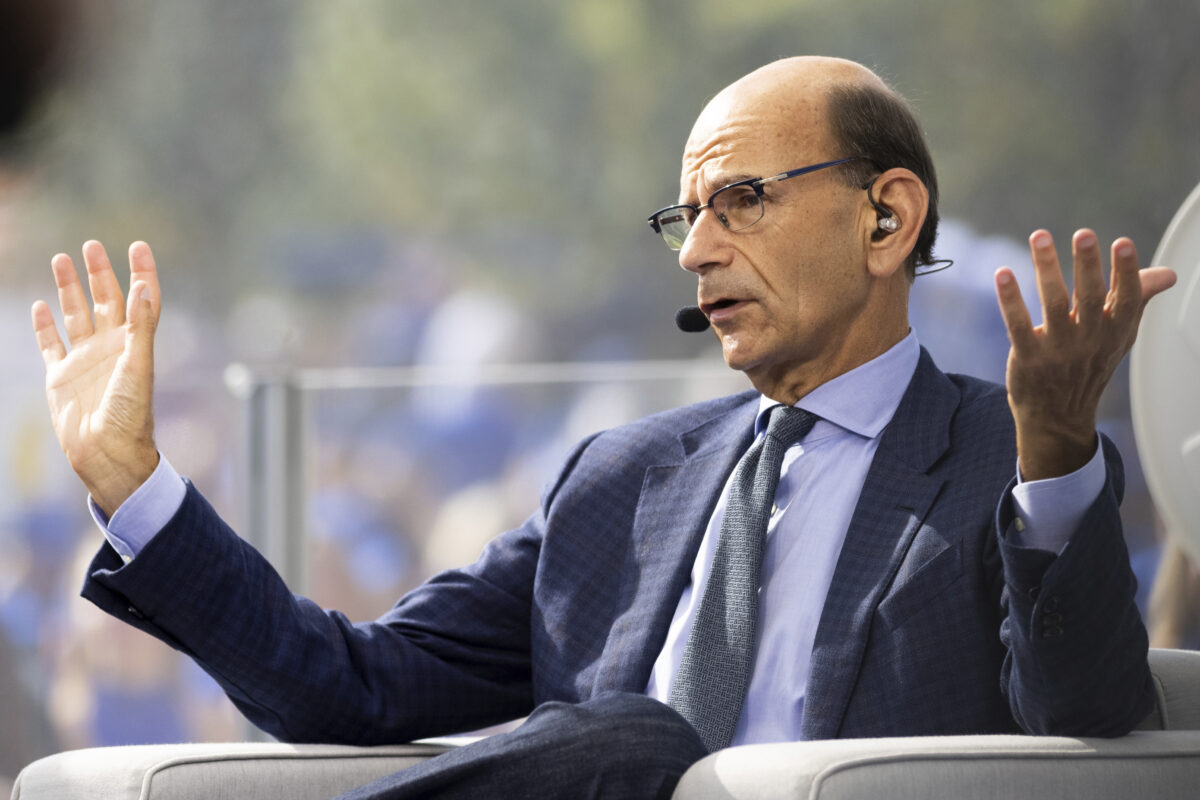 With the college football regular season over, Paul Finebaum sees four teams that would make the College Football Playoff right now. And it all comes with a not insignificant caveat – there is still a week of conference championship games to be played.

After a wild weekend that saw the likes of Ohio State, Clemson and LSU all lose, there was some clarity in terms of who the top four teams in the nation are in terms of the College Football Playoff.

Gazing into the crystal ball ahead of this week’s College Football Playoff rankings release, Finebaum didn’t have any surprises in his top four teams to make the playoff:

“I would say Georgia, Michigan TCU and Southern Cal,” Finebaum said on Monday in an interview with RutgersWire.

TCU, Finebaum says, is in a position to move into the College Football Playoff if they win the Big 12 Championship Game.

“I think TCU is in the Cincinnati role of a year ago where and I don’t want to I mean, I know every time I talk about TCU – I get blowback about their strength of schedule and all this stuff. I think that’s overrated,” Finebaum said.

“I think it’s and unfortunately for TCU they haven’t played what I would call the elite teams. So to me, it’s how you play and what you do against the teams that really matter. Not you know, the number No. 24 team in the country that is good, but has no chance of being a contender. And that’s the one thing I don’t know about them. I mean, I know. Georgia has played Tennessee. I know Michigan has played Ohio State and Penn State. I just don’t know. I haven’t –  I don’t know enough about TCU even through 12 games to tell you beating Kansas State for a conference championship.”

The best holiday gift ideas for any Rutgers Scarlet Knights fan in your life. 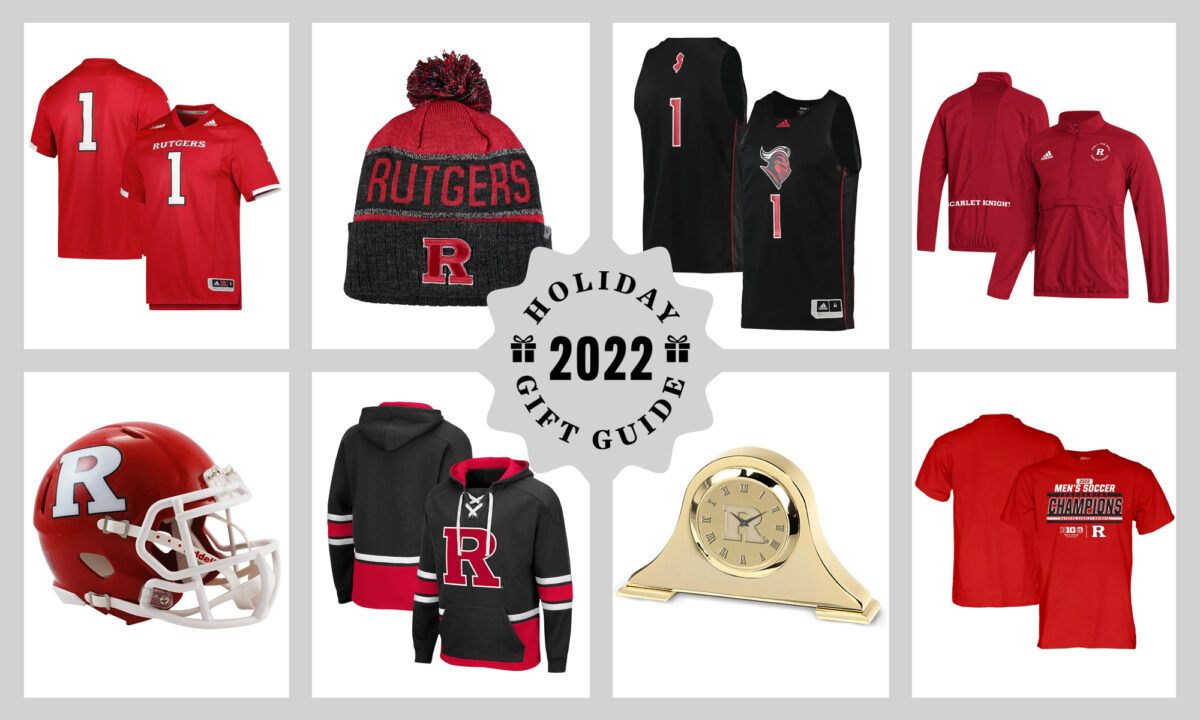 Football season is coming down the home stretch, basketball season has started, and for NCAA fans it’s the most wonderful time of the year.

It’s been a tough football season for the Scarlet Knights, but Rutgers Wire is here to give you a reason to celebrate this holiday season.

Fanatics is offering 30% off all orders on Cyber Monday, so take at least 30% off the prices in the list below and get the perfect gift for the Rutgers fan in your life.

Whether you’re an alumni, a New Brunswick resident, or just really love to reminisce about the days of Devin McCourty and Carli Lloyd, we’ve got you covered with our list of best Rutgers gifts for the holiday season. 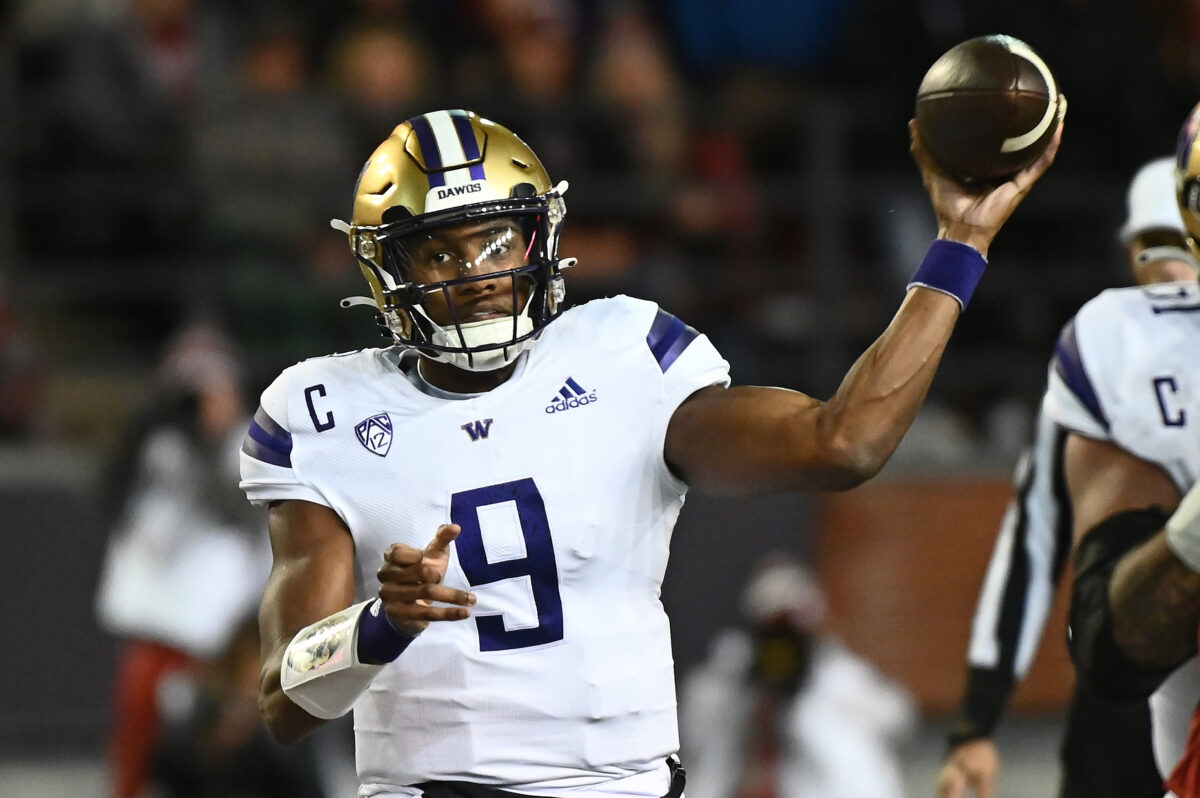 It's second only behind his school record 516 earlier this year vs. Arizona 😳 pic.twitter.com/EumJOFGmha

Pac-12 after dark rarely disappoints, and Saturday night’s installment of the Evergreen State’s biggest rivalry lived up to the billing.

It featured a showdown between two of the top quarterback prospects in the 2023 NFL draft class, and while Washington’s Michael Penix Jr. and Washington State’s Cameron Ward both delivered the goods, it was the Huskies’ signal-caller who got the last laugh.

Penix shredded the Cougars defense for 485 yards and three touchdowns through the air, adding 34 yards and two more scores on the ground as Washington ran away with a 51-33 victory.

Just as he has all season long, Penix showed off all the physical and mental traits that NFL teams covet in a franchise quarterback, along with the competitiveness to keep making big plays, going blow-for-blow with Ward and the explosive Washington State offense.

A transfer from Indiana, Penix leads the nation in passing yards this season, and could get a chance to shine on another big stage if the Huskies end up with a trip to the Rose Bowl.

How to watch each of the college football conference championship games. 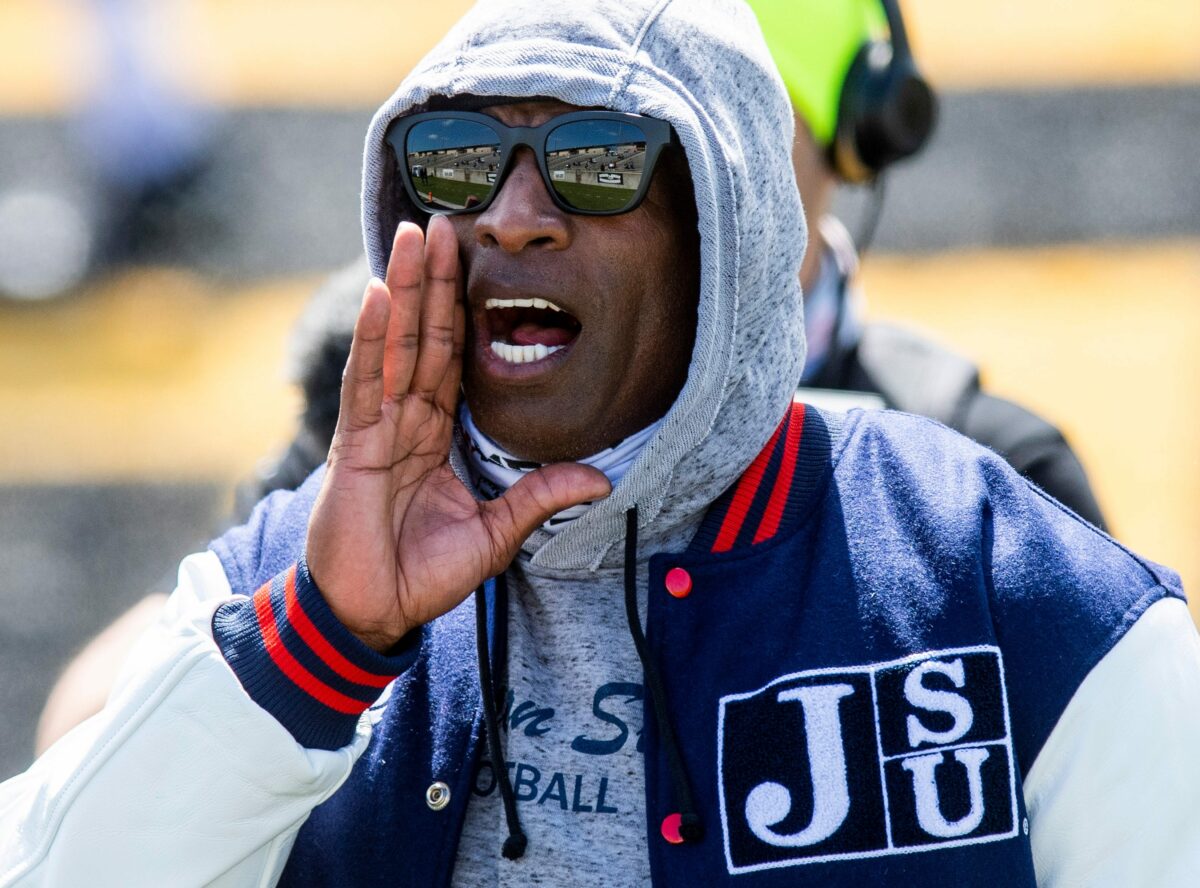 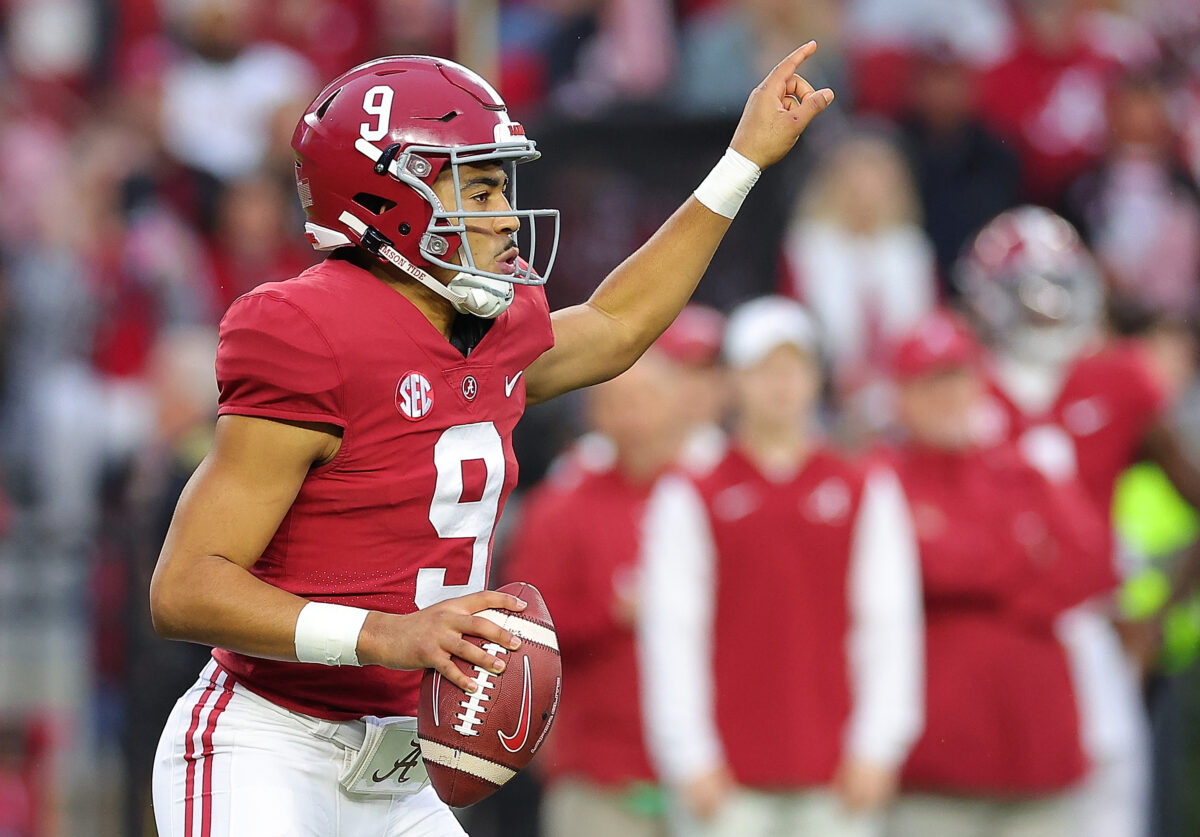 It had all the makings of a potential trap game, but Alabama came to play in Saturday’s Iron Bowl, beating rival Auburn 49-27.

Crimson Tide quarterback Bryce Young delivered another impressive performance, completing 20 of his 30 pass attempts for 343 yards and three touchdowns, adding 48 more yards and another score on the ground.

In the process, Young became the first player in Bama history to have 3,000 passing yards in multiple seasons.

Arguably the best quarterback prospect in the 2023 NFL draft class, Young should be the current front-runner for next year’s No. 1 overall pick.

Texas A&M rode a huge performance from running back Devon Achane to a 38-23 upset win over No. 5 LSU 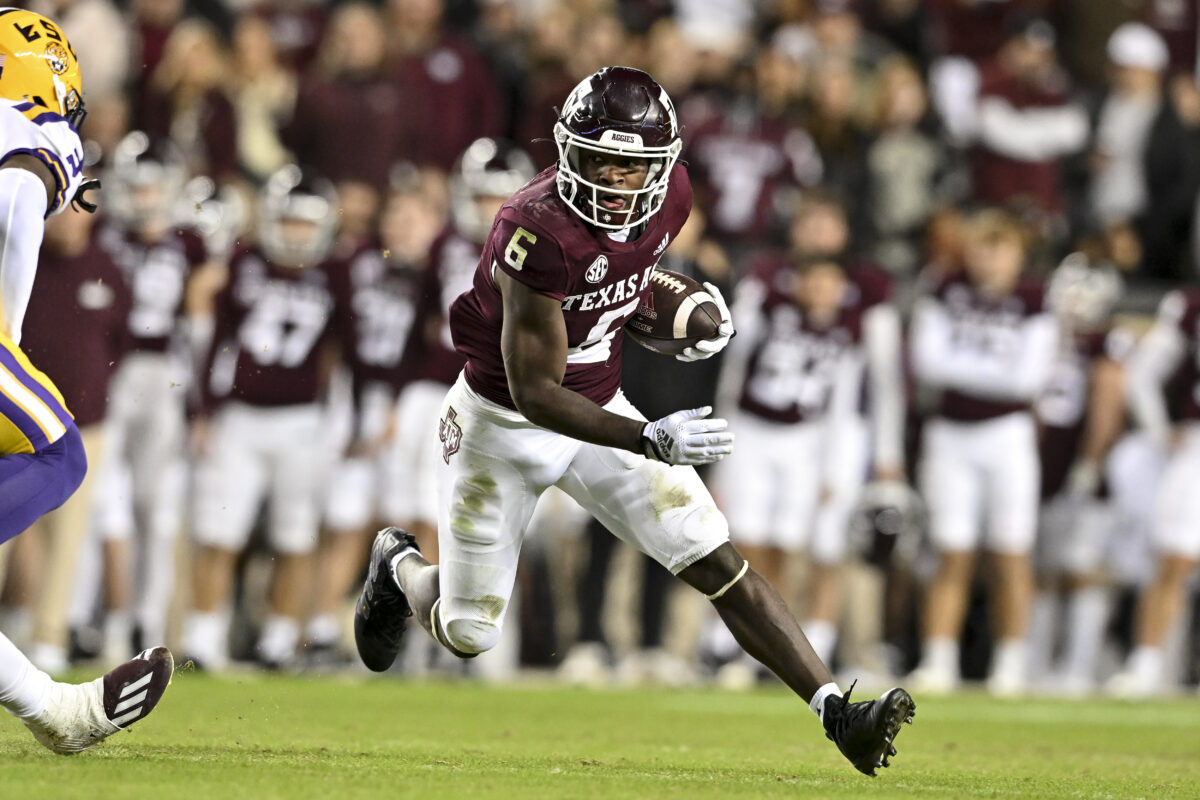 The LSU Tigers had already clinched the SEC West title, and a date with Georgia in the SEC Championship Game, but they might have forgotten that they still had another game before that.

That might be the only explanation for Saturday’s shocking upset loss to unranked Texas A&M, spearheaded by a dominant performance from Aggies running back Devon Achane.

Despite missing the previous week with a foot injury, Achane ran wild against the Bayou Bengals, racking up 215 yards and a pair of touchdowns in the 38-23 victory.

One of the more intriguing offensive weapons in the 2023 NFL draft class, Achane’s performance Saturday night should no doubt turn some heads among NFL decision-makers heading into draft season.