Burks, who is expected to make an immediate impact for the Tennessee Titans, has agreed to terms on his rookie contract. 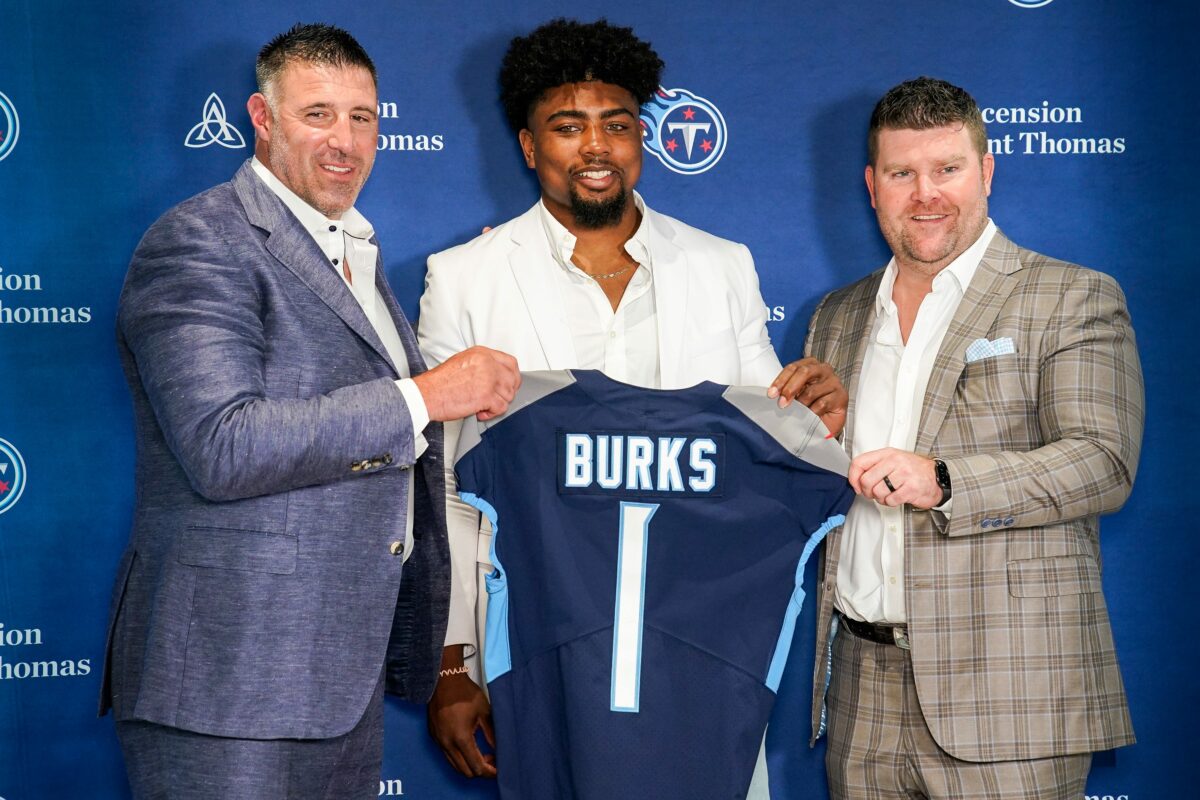 A former Arkansas standout has officially come to terms with his first NFL contract.

On Tuesday, the Tennessee Titans and first-round selection Treylon Burks agreed to a four-year deal, with a fifth-year option according to Field Yates of ESPN.

The Titans and first round WR Treylon Burks have agreed to terms on his 4-year, $14,369,590 fully guaranteed contract with a fifth-year team option.

According to Titans Wire, Burks is the 5th draft pick by the Titans to sign a rookie deal joining Hassan Haskins, Kyle Phillips, Theo Jackson, and Chance Campbell, who were all third day selections.

Picks who have yet to come to an agreement include Auburn’s Roger McCreary and Liberty’s Malik Willis.

Burks had a rocky start to his Titans career, as he reportedly left the first day of rookie mini camp early due to being winded.

“I know that they’re working and they think that they are trying to get in shape, but that’s just not the case,” said Titans head coach Mike Vrabel of Burks’ early exit. “That’s something that we have to focus on and try to make sure that we’re getting some work in with all of them. We’re trying to be as smart as we possibly can.”

However, his performance on day two was better as he practiced the entire time without issues.

Treylon Burks, John Ridgeway, and Montaric Brown all have new homes. Here’s a peek at what they look like in their new uniforms. 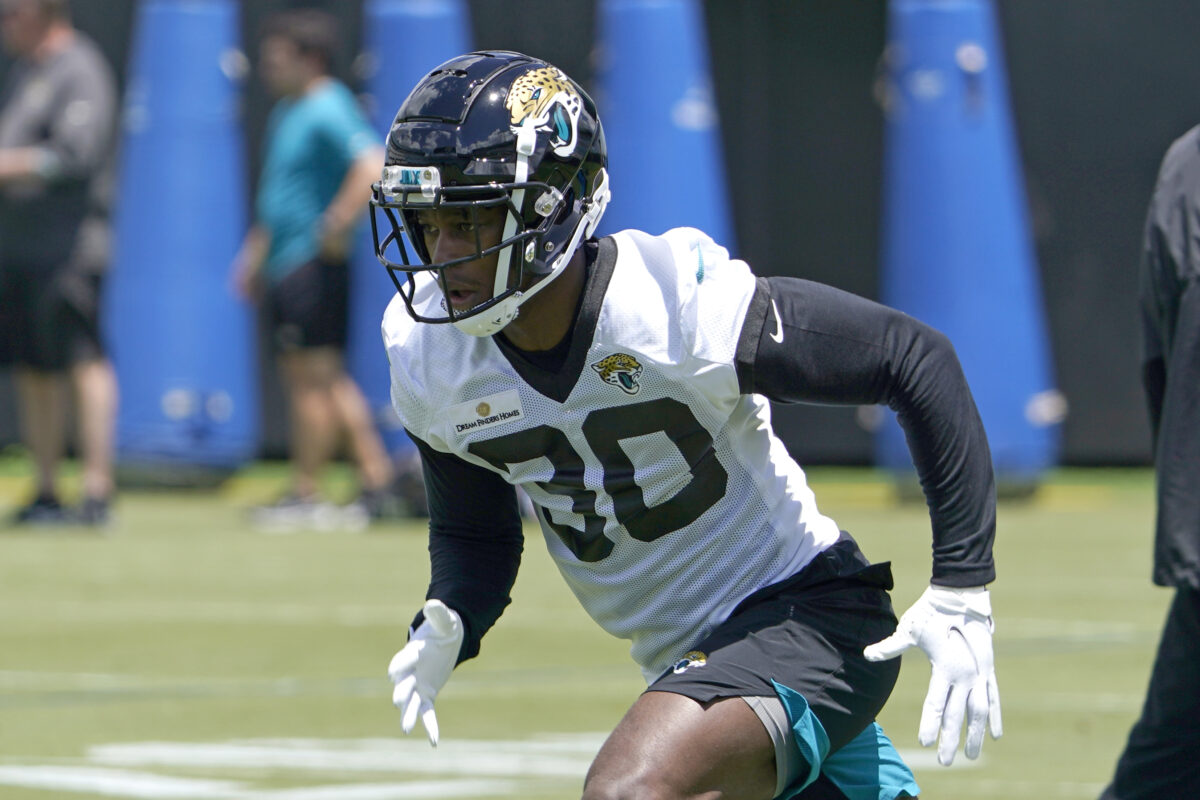 Arkansas Football had three players selected in the 2022 NFL Draft, which is the most since 2019, when three Razorbacks were also taken in the draft.

[autotag]Treylon Burks[/autotag] was taken 18th overall by the Tennessee Titans in this year’s draft, making him the first Razorback to be taken in the first round since 2018, when Frank Ragnow was selected 20th overall by the Detroit Lions. Burks was the highest draft pick from Arkansas since Darren McFadden went 4th overall to the Oakland Raiders in 2008.

The next selection from Arkansas was [autotag]John Ridgeway[/autotag], who was drafted by the Dallas Cowboys with the No. 178 overall selection. Ridgeway becomes the third Razorback to be taken by Dallas, which is surprising considering the proximity of Dallas to Fayetteville, and the fact that the Cowboys are owned by Arkansas alum, Jerry Jones. The last Razorback to be taken by Dallas before Ridgeway? Felix Jones in 2008.

The last selection from Arkansas in the 2022 draft was [autotag]Montaric Brown[/autotag] with the 222nd overall pick. Jacksonville has been a popular destination for former Razorbacks, as five former Hogs have been selected by Jacksonville since 2000, with the most recent being Brandon Allen in 2016.

Here is a look at what these former Razorbacks look like in their new uniforms. 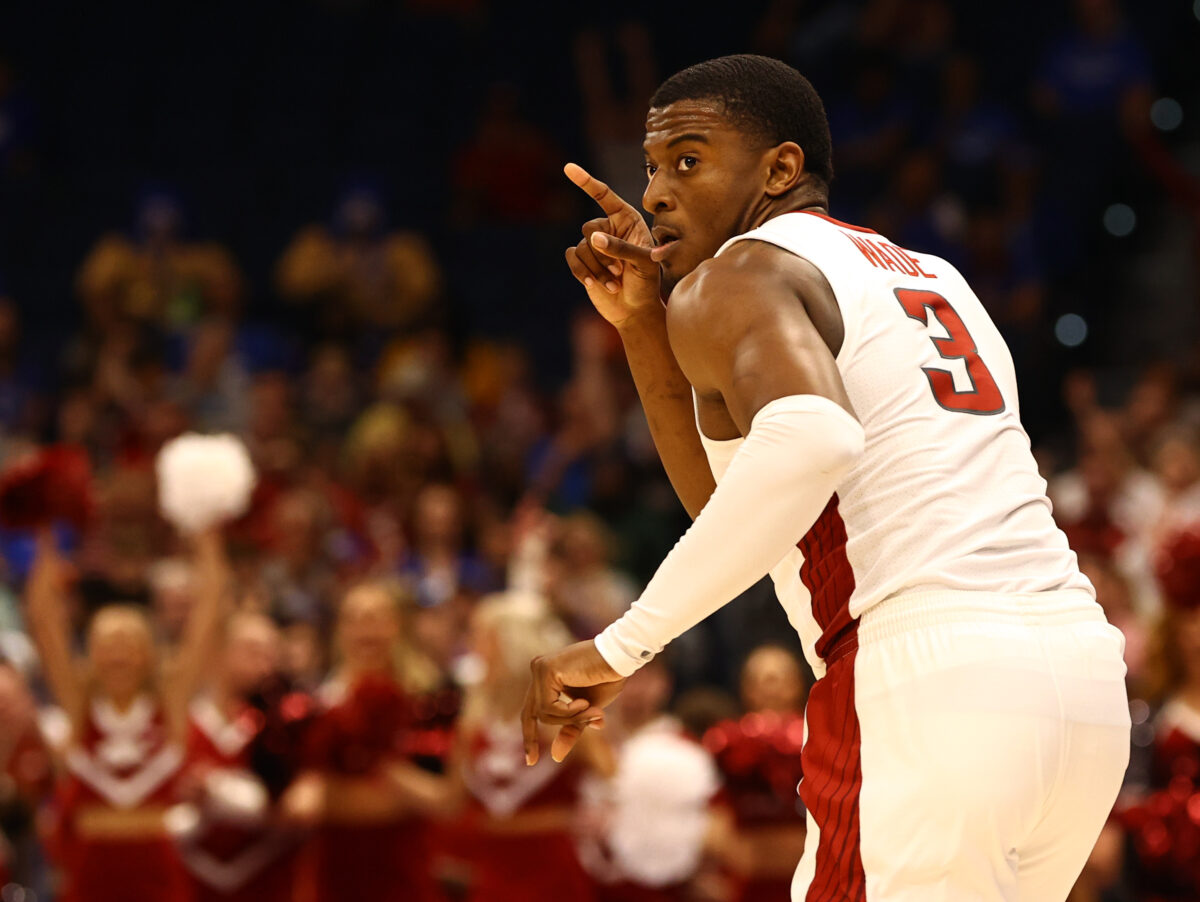 Arkansas Football had three players to be drafted in the 2022 NFL Draft, and three more were invited to camps as undrafted free agents.

On Monday, that number grew to seven players, but not in a way that you would think.

[autotag]Trey Wade[/autotag], who played his final eligible basketball season with Arkansas following a transfer from Wichita State, has been invited to attend rookie mini-camp with the Arizona Cardinals.

YES YOU READ THAT RIGHT… TREY WADE IS IN THE NFL!!! pic.twitter.com/Rl87lMKMeA

Razorback fans were shocked in mid-April, when head basketball coach [autotag]Eric Musselman[/autotag] announced on twitter that Wade was getting ready to turn pro, but in football instead of basketball.

Excited for @treywade35 getting an opportunity to participate in @NFL tryouts! Can speak from experience (torn rotator cuff) he is tough and can play through contact 😂 🏈

In his lone season at Arkansas, Wade started in 24 games while appearing in 37. He averaged 3.6 points per game, and pulled down 96 rebounds. The Cardinals will work Wade at the tight end position, according to reports.

After starting 33 games and anchoring Arkansas’ offensive line at left tackle, Myron Cunningham is a pro. 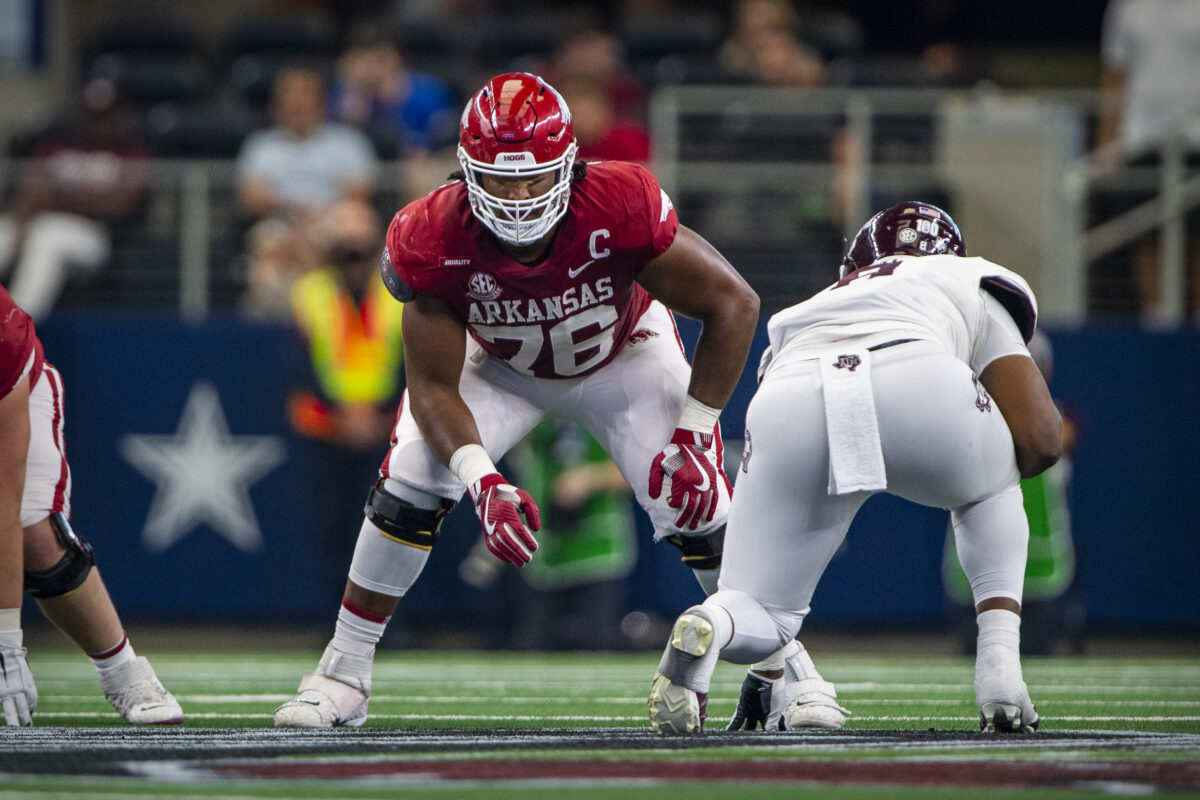 [autotag]Sam Pittman[/autotag] is a legend in building offensive linemen and putting them into the NFL. His latest is off to the Houston Texans.

Myron Cunningham spent the last two seasons, his only two in Fayetteville, as Arkansas’ starting left tackle. On Saturday afternoon, Cunningham signed as a free agent with Houston.

Cunningham started 33 games in his two seasons and was named a team captain last year.

If Cunningham were to make the team, he would become the first Arkansas offensive lineman in the NFL since Hjalte Froholdt was taken in the fourth round in 2019. Froholdt played six games for Cleveland this past season.

After a six-year career that saw him finish 13th on Arkansas’ all-time tackle list, he’s headed to Jacksonville. 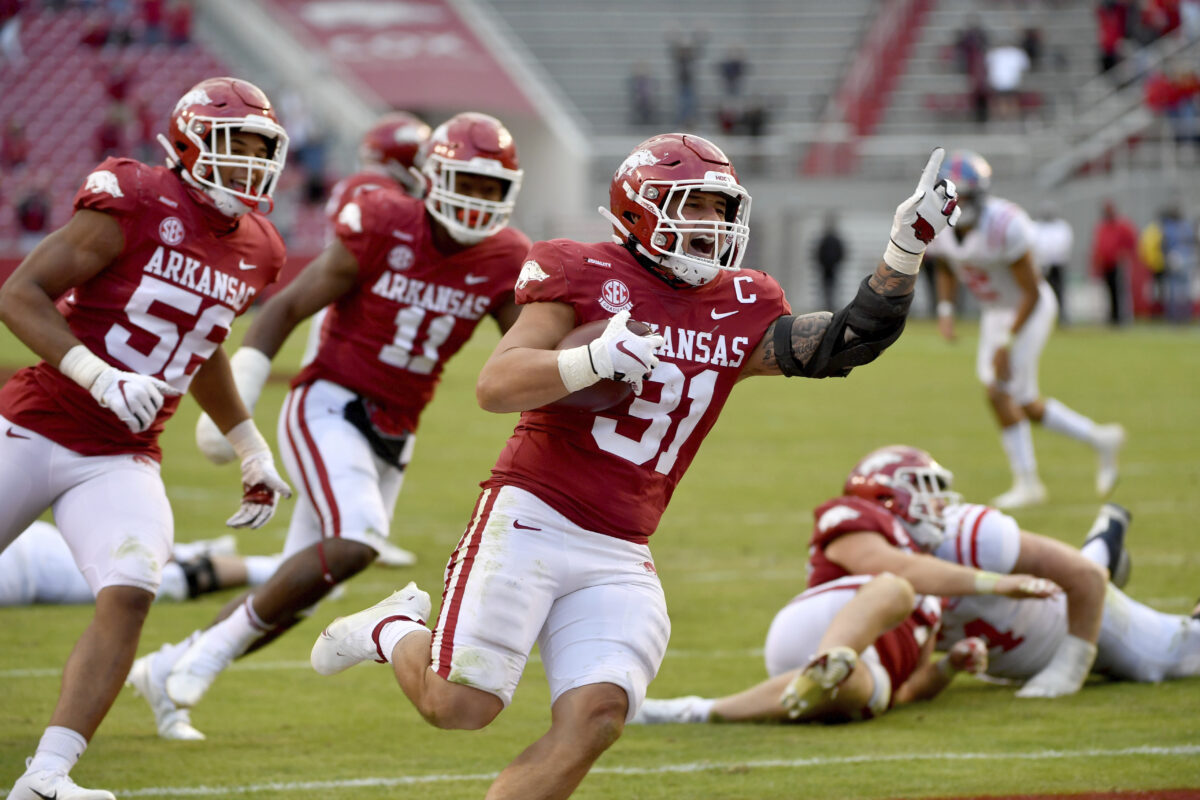 [autotag]Grant Morgan[/autotag] left Arkansas as one of the most beloved players of the modern era after starting as a unheralded walk-on.

Now Morgan will seek to do the same in the NFL.

The former six-year linebacker with the Razorbacks will join the Jacksonville Jaguars as a free agent. There he will join his former teammate, cornerback Montaric Brown, who was drafted by the Jags in the seventh round.

The brother of former Arkansas wide receiver Drew Morgan, who also signed as an undrafted free agent after finishing his career in the mid 2010s, finished his career with the Hogs with 313 tackles. That number is 15th in Arkansas history.

Morgan was one of three Arkansas players to sign as undrafted free agents after the NFL draft’s conclusion on Saturday, joining three others who were drafted in Brown, John Ridgeway and Treylon Burks.

Montaric Brown is heading to Jacksonville! He’s the fifth Razorback in history to be selected by Jacksonville, and the first since 2016, when the Jags selected Brandon Allen in the sixth round of the 2016 draft. 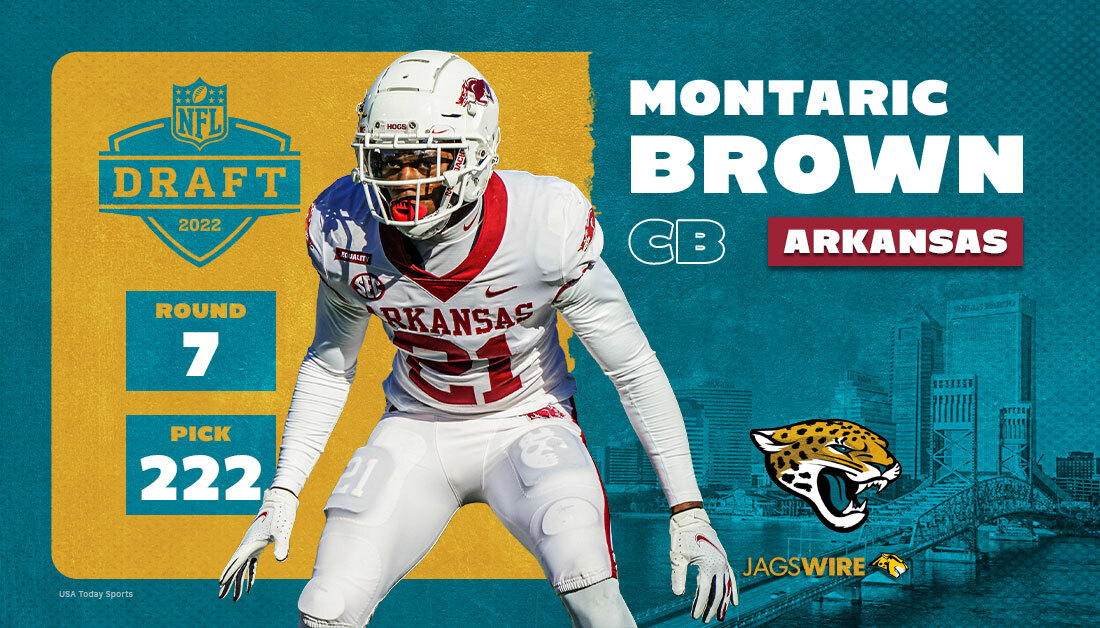 [autotag]Montaric Brown[/autotag] has become the third Razorback taken in the 2022 NFL Draft, as has been selected in the seventh round by the Jacksonville Jaguars, as the 222nd overall pick.

Brown is the second pick from Arkansas to be selected on the final day of the draft, joining [autotag]John Ridgeway[/autotag], who was selected by the Dallas Cowboys with the 178th overall pick. 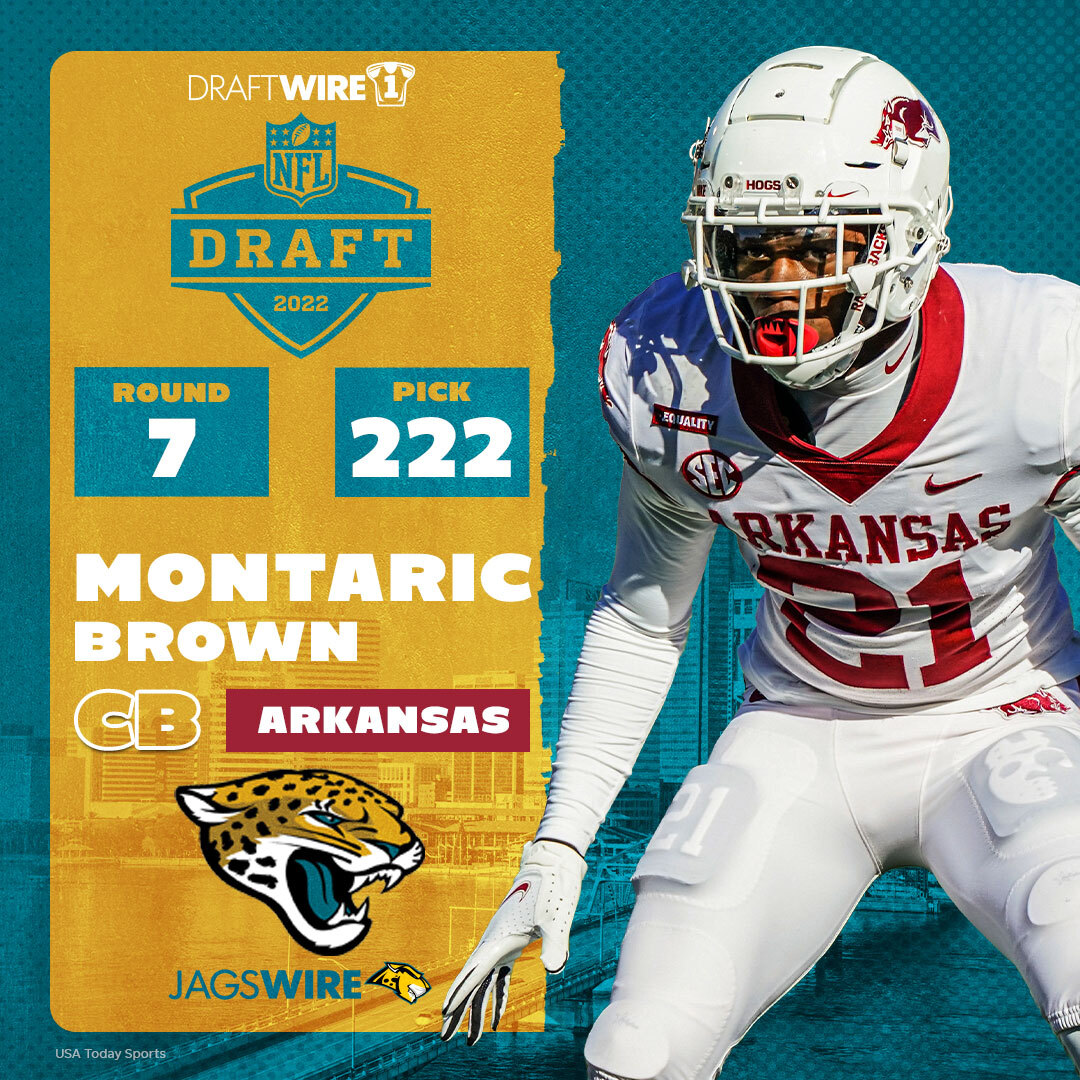 Brown becomes the fifth player from Arkansas to be drafted by Jaguars, and the first since Brandon Allen, who was selected 201st overall in the 2016 draft. If Brown signs with the Jags, he will become teammates with former Razorback Jeremiah Ledbetter, who plays defensive end for Jacksonville.

When it comes to drafting former Razorbacks, Jacksonville has usually gone the offensive route. Allen, as well as Matt Jones (2005), and Emanuel Smith (2000) were offensive players taken by the Jaguars. Brown is just the second defensive player from Arkansas to be drafted by Jacksonville, the first being Chris Smith, who was drafted with the 159th pick in the 2014 draft.

Brown had a breakout season for Arkansas in 2021. The Ashdown, Ark. native started in all 13 games, and recorded career-bests in total tackles (54), pass deflections (11), and interceptions (5).

Throughout his five-year career at Arkansas, Brown made 132 total tackles, forced two fumbles, and picked off seven passes.

Ridgeway becomes the first Razorback to be drafted by Dallas since Felix Jones was taken 22nd overall in 2008. 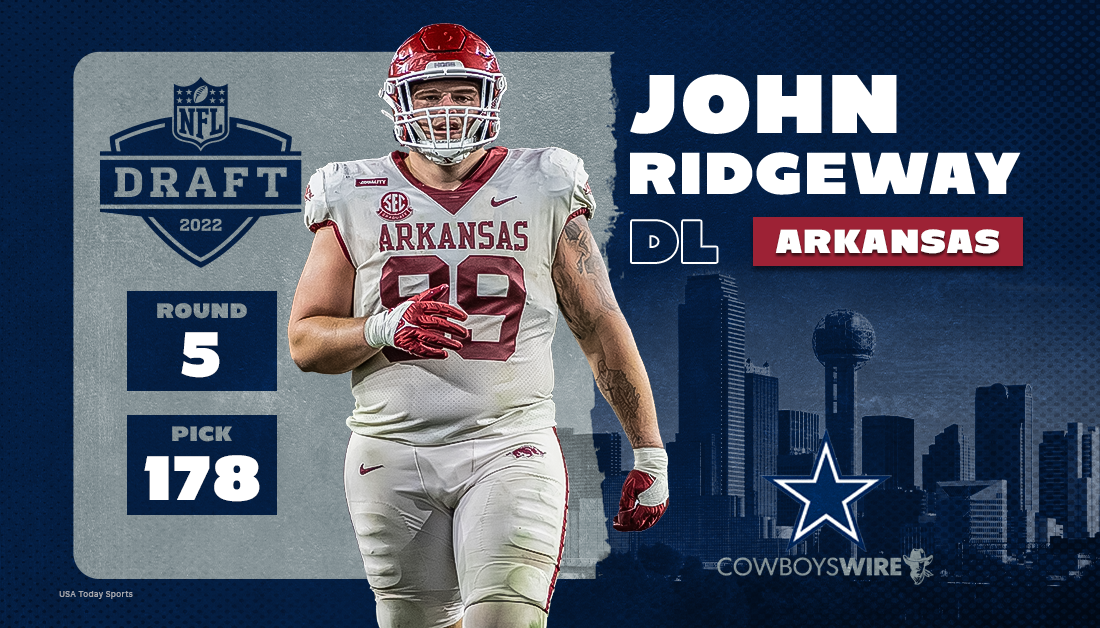 It appears that another Razorback is headed to Dallas.

The Dallas Cowboys have selected Arkansas defensive lineman [autotag]John Ridgeway[/autotag] with the 178th overall selection of the 2022 NFL Draft, making him the second product from Arkansas to be taken in this year’s draft, joining [autotag]Treylon Burks[/autotag], who was taken 18th overall by the Tennessee Titans. 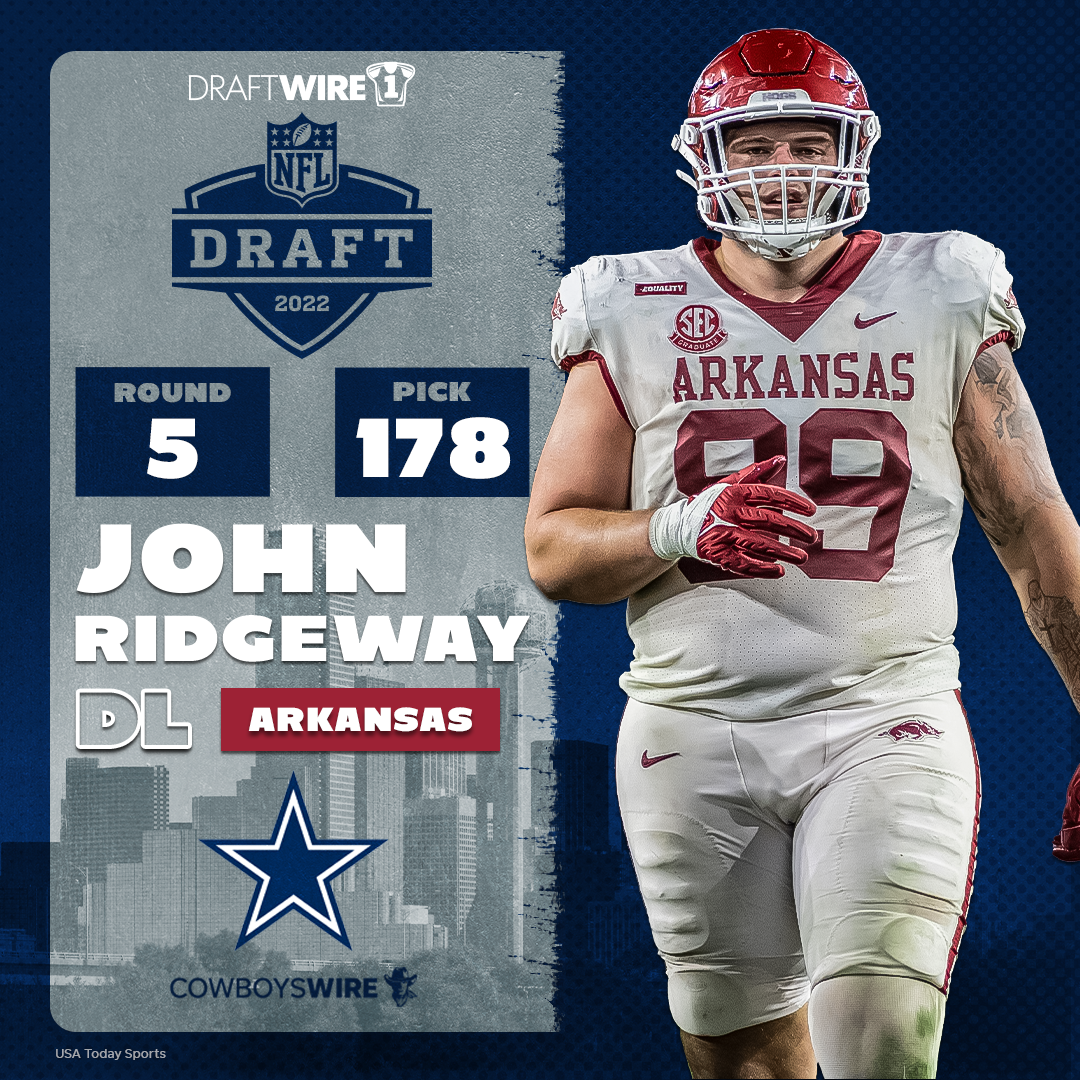 A transfer from Illinois State, Ridgeway played his final collegiate season at Arkansas, where he started in 11 of 12 games that he appeared in. In his lone year in Fayetteville, Ridgeway recorded 39 total tackles, four tackles for loss, and two sacks.

During his four-year college career, Ridgeway started in 40 games, made 141 tackles with 12 of them being for loss.

Ridgeway becomes just the third Arkansas player to be drafted by the Dallas Cowboys, who are owned by Arkansas alum Jerry Jones, and the first since Felix Jones was taken 22nd overall in the 2008 NFL Draft.

Treylon Burks became the 8th first-round pick from Arkansas since 2004 on Thursday. Who are the other seven? 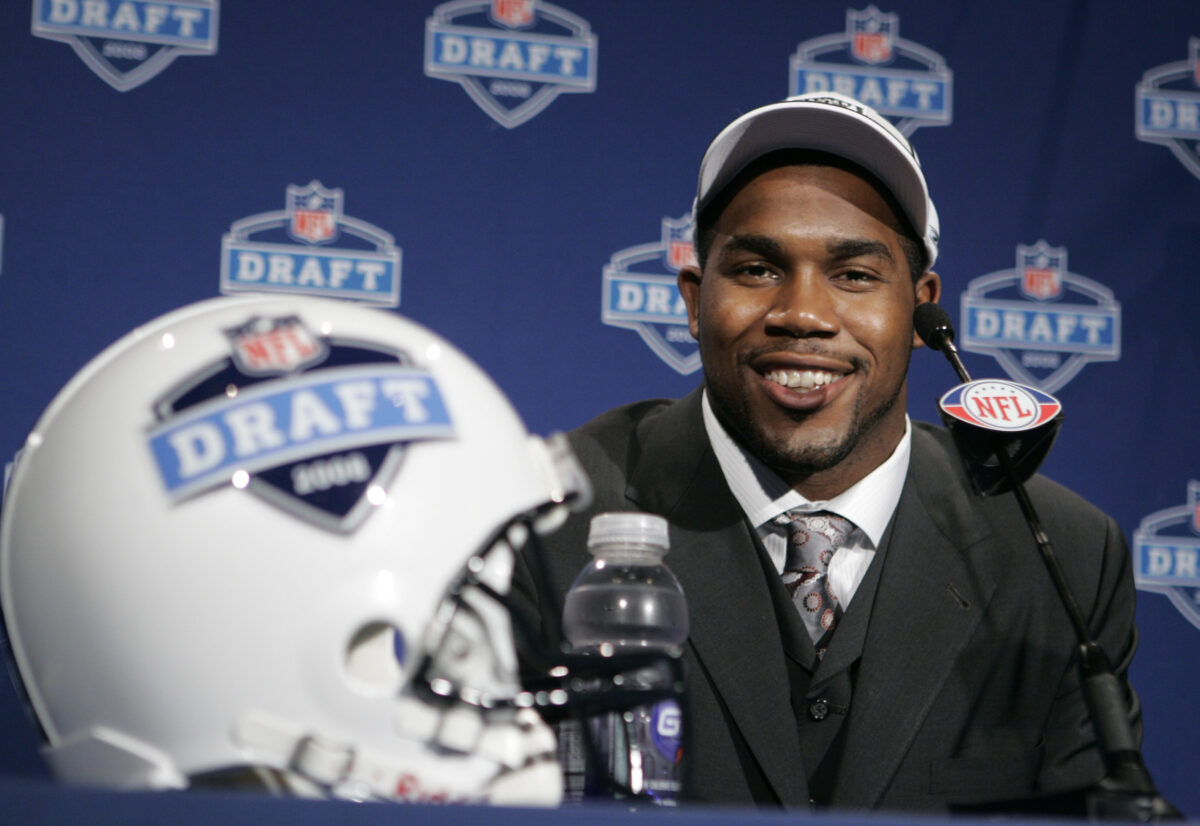 [autotag]Treylon Burks[/autotag] became the 24th first-round pick in Arkansas football history during the 2022 NFL Draft, when he was taken 18th overall by the Tennessee Titans, following a trade with the Philadelphia Eagles that involved wide receiver, AJ Brown.

Who are the eight Razorbacks taken in the first round since 2004? Let’s explore.

Treylon Burks goes No. 17 to the Tennessee Titans. 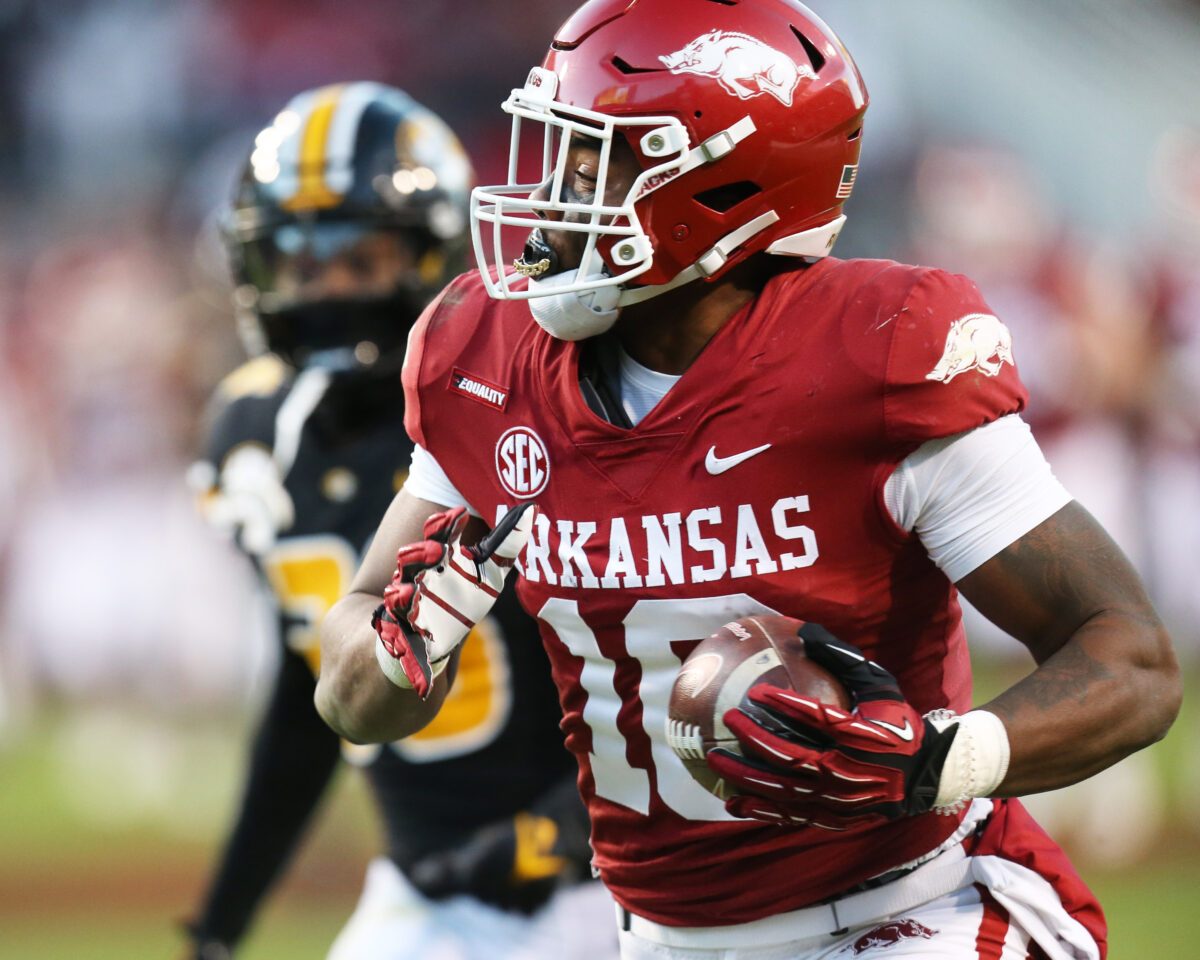 [autotag]Treylon Burks[/autotag]’ Arkansas career is over on the field. But the Warren, Arkansas, native can stay close to home.

Burks, who left Arkansas after three seasons, was taken in the first round of the NFL draft on Thursday night with the No. 18 pick by the Tennessee Titans. Tennessee traded up to make the selection that was originally owned by the Philadelphia Eagles.

Burks caught 66 passes for 1,104 yards and 11 touchdowns during his junior year and helped the Razorbacks to their best record since 2011. Burks is the only player inside the top 10 of Arkansas receiving records who played just three seasons.

The last Arkansas player to be taken in the first round was Frank Ragnow by the Detroit Lions in 2018. He was taken with pick No. 20 that year. Burks is the highest selection from Arkansas since Darren McFadden went No. 4 in 2008 to Oakland.

“Being from Ashdown, I just want [the kids] to think that you can make it from anywhere, no matter where you come from,” says Brown in an interview with KATV in Little Rock. 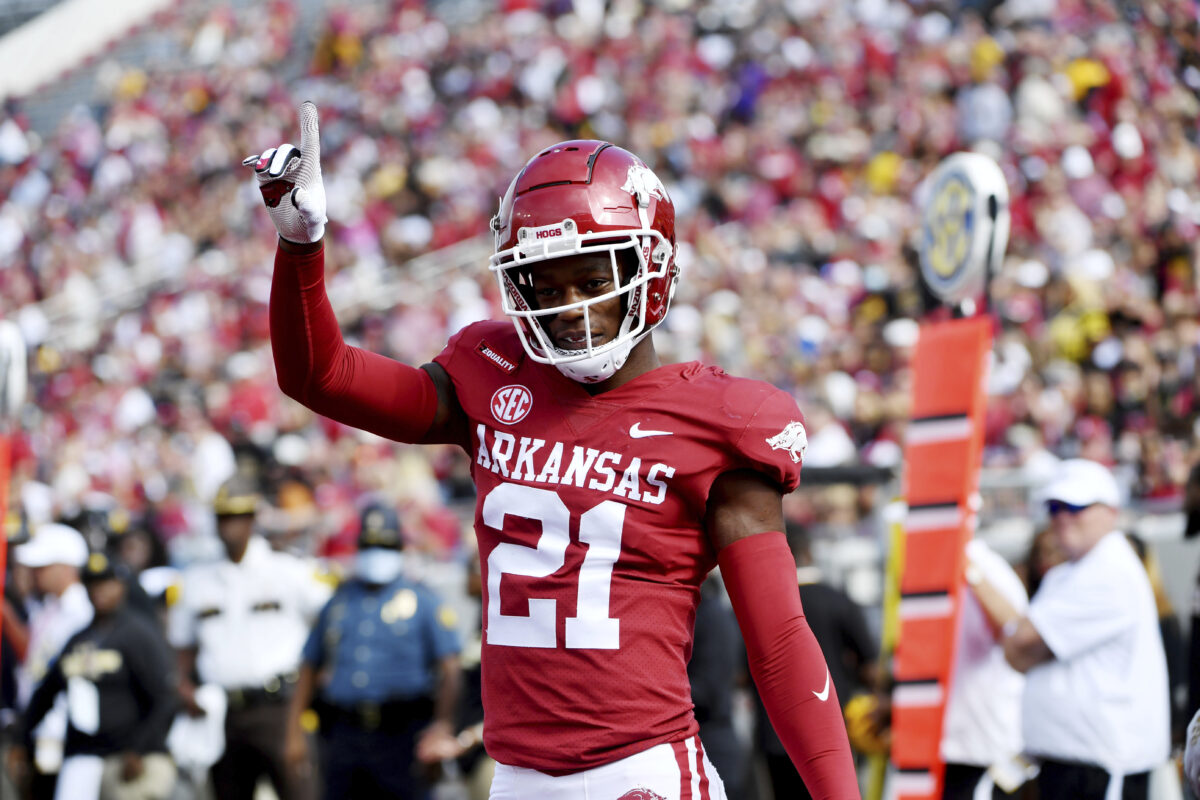 Arkansas defensive back [autotag]Montaric Brown[/autotag] is living the dream of most boys who grow up in Arkansas by playing for the Razorbacks and having a shot to play in the NFL.

Brown, who played in 42 games over a five-year span at Arkansas, signed with the program during one of its’ lowest points. In an interview with KATV in Little Rock, Brown says that he would not trade his time at Arkansas for anything.

“Just being from Arkansas, Arkansas doesn’t have an NFL team so I cheer for Arkansas like my NFL team,” Brown says. “It was a dream as a little kid to come to Arkansas so there was no way I was leaving.”

Now that his college days are behind him, Brown is preparing for the NFL Draft, which is set to take place April 28-30. According to NFL analyst Lance Zierlein, Brown is a projected round 5-6 pick.

But, no matter where Brown begins his NFL journey, he wants to continue setting an example to kids from his hometown of  Ashdown, Ark. That example? Your dreams are never out of reach.

“Being from Ashdown, I just want [the kids] to think that you can make it from anywhere, no matter where you come from,” Brown says. “I just want to be that example. You can make it out of any situation.”

After redshirting his freshman season in 2017, Brown started in 34 games from 2018-2021 for Arkansas. During his time as a Razorback, Brown recorded 132 total tackles with seven interceptions and 23 pass deflections. During his senior season, Brown was named first team All-SEC after leading the conference with five interceptions, in addition to recording 54 tackles.