Trevor Lawrence continues to make elite level throws game-after-game, and his first touchdown of Week 6’s game (to Marvin Jones) is another must see. 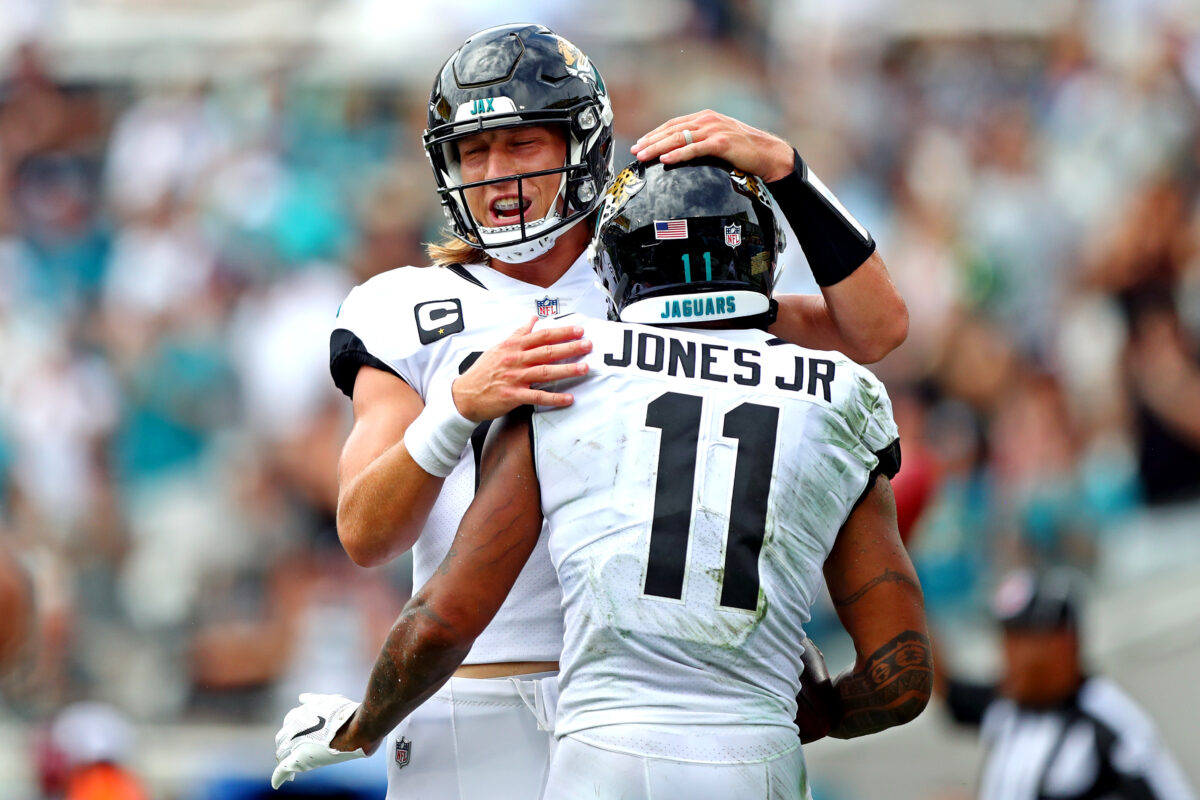 The Jacksonville Jaguars are currently down by a score of 13-10 at the half, but their offense seems to have gained some momentum. On their last offensive drive, Trevor Lawrence was able to pull the Jags within four after linking up with receiver Marvin Jones Jr. for a 28-yard passing touchdown near the back of the end zone.

Simply put, this is an elite level throw by Lawrence and a heck of an adjustment by Jones on the route. It was a connection that fans have grown accustom to seeing often this year and it’s clear the work the pair put in this offseason is paying off.

The touchdown came on a six-play drive where receiver Laviska Shenault made some key third-down conversions in the process, too. And with the Jags set to get the opening possession of the second half, the hope is that Shenault, Jones, and Lawrence can continue where they left off to get the Jags their first win.

Update: The Jags scored on the first drive of the second half with a 1-yard James Robinson rush. The Jags then took the lead by a score of 17-13.

Jags rookie Trevor Lawrence took advantage of the opening drive by hitting Marvin Jones Jr. on a 25-yard strike to the veteran, which started the game off at a 7-0 score.

The Jacksonville Jaguars started Week 1 off on a slow note and let the Houston Texans punch them in the mouth first. However, in Week 2’s game that was not the case as the team scored first — and did so in the opening drive.

Rookie Trevor Lawrence was able to march the team down the field on an 11-play drive that resulted in a 25-yard touchdown reception to Marvin Jones Jr. The veteran ran a fade up the top side of the field and saw little resistance, which allowed him to get a step on veteran Kyle Fuller.

On the drive, Lawrence was able to convert four third-down situations, so the pass blocking has been good for him to open the game. His pass to Jones and the point after attempt then put the score at 7-0, but Denver was able to drive down the field for a field goal on the following drive, putting the score at 7-3.

While it’s hard to choose a standout after such a rough loss, the Jaguar we chose to nominate as the player of the game is WR Marvin Jones Jr. 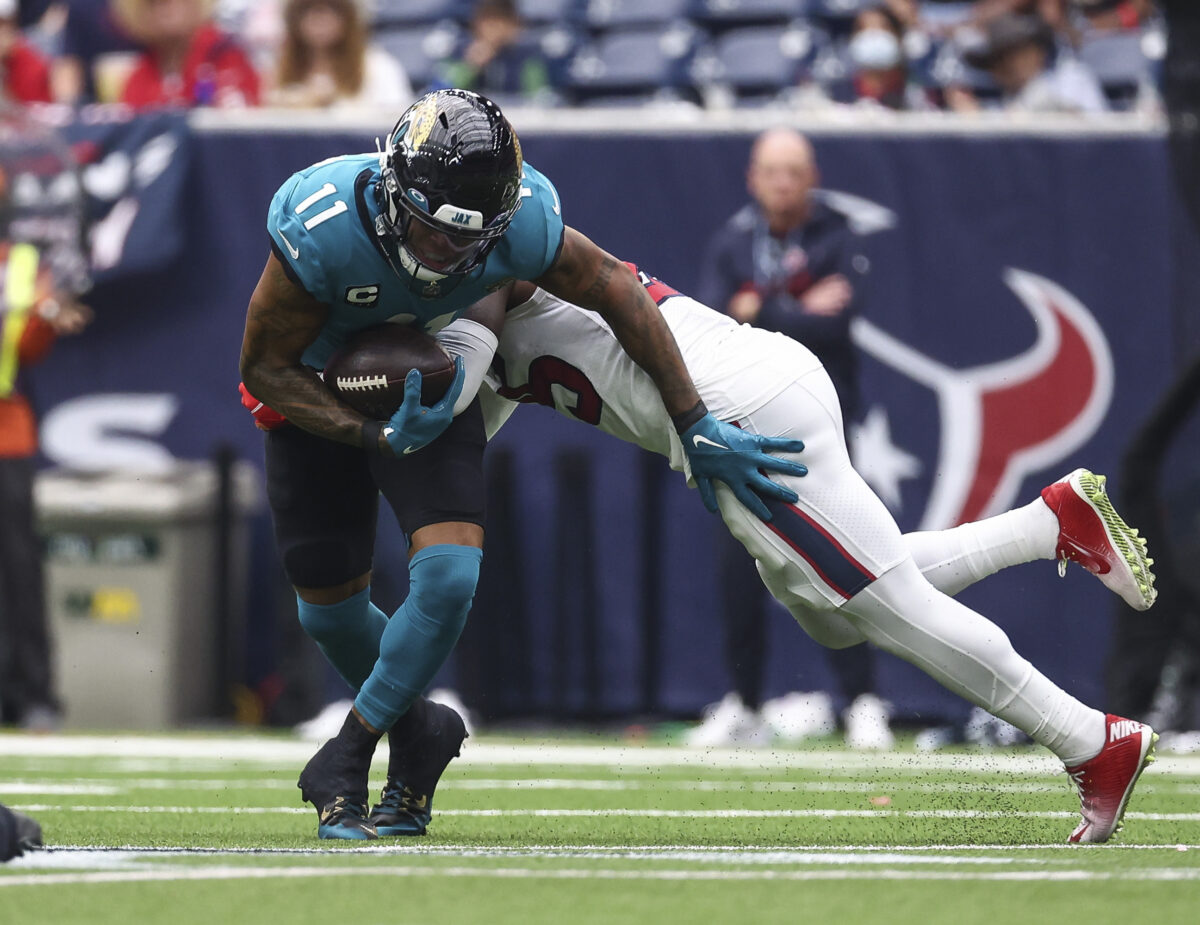 It was a rocky Week 1 start for the Urban Meyer-led Jacksonville Jaguars, who lost 21-37 against the Houston Texans. Defensively the team looked slow and surprisingly outmatched against a Texans offense led by Tyrod Taylor and Brandin Cooks. The Jaguars managed just one sack while giving up nearly 450 yards on offense, which is certainly not an ideal start to the season.

On the other side of the ball, Trevor Lawrence and company took fans on an up and down roller coaster experience. The team was plagued by drops, penalties, and miscues, totaling 10 penalties on the day and three turnovers. After a slow start, the offense seemed to find a groove through Lawrence’s right arm. Down early, Lawrence rallied the team, throwing a 22-yard strike to Chris Manhertz.

It was Marvin Jones Jr., however, that showed the most consistency against the Texans. While Chark might have had a huge day statistically (with 86 yards and a touchdown), it was Jones who had the better day overall. Jones hauled in five balls for 77 yards and a touchdown.

Jones made an immediate impact in the game, bringing in a beautiful 33-yard pass. It was, arguably, Lawrence’s best throw of the day.

Trevor Lawrence to Marvin Jones are moving down the field! pic.twitter.com/IM60092M5g

Jones might not be as flashy as Shenault or Chark, but his role in the offense is crucial to its success. His ability to create separation and score is why the Jaguars front office thought so highly of the former Detroit Lion. Jaguars fans got to see that ability first-hand late in the game Sunday when Lawrence rebounded and connected with Jones on a 4-yard touchdown reception.

Marvin Jones catches a rocket from Lawrence for the touchdown pic.twitter.com/DkEx7a2NHf

The offense can be very good — scary good even. The weapons and quarterback are there to make this a dynamic offense. Jones played a fairly clean game, and it was many of the other offensive pieces that struggled. If the team can work on the penalties, drops, and miscues, the Jags’ top-3 receivers are more than enough to make opposing defensive coordinators sweat. Can they do it is more so the question?

Which players from the Jags’ roster are climbing and which players are fading after their first preseason game of 2021? 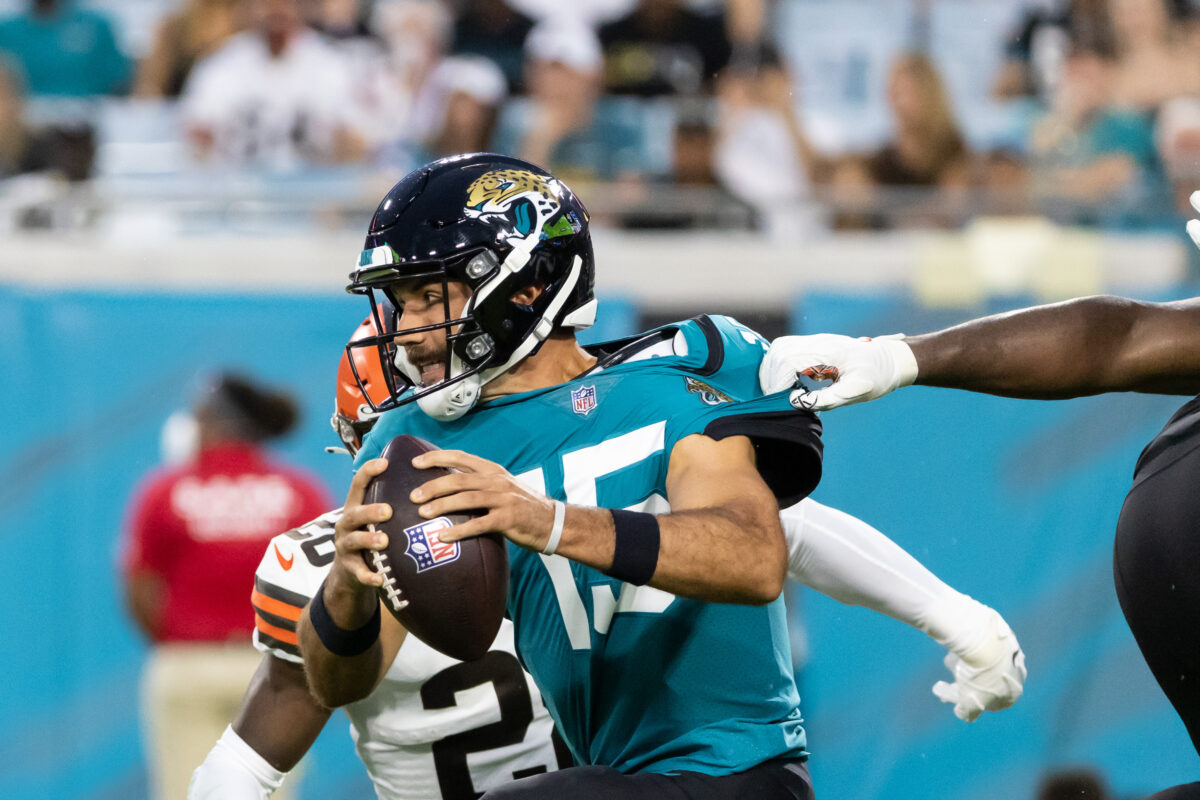 Football has returned to Duval County finally as the Jacksonville Jaguars started their 2021 campaign in a preseason game against the Cleveland Browns at TIAA Bank Field. The fans in attendance were treated to the first taste of NFL action for No. 1 selection Trevor Lawrence and the NFL debut of former Utah, Ohio State, and Florida University coach Urban Meyer.

While the debuts of those two were high on the list, a few other Jags players stood out. Unfortunately, some who started off the season on the wrong foot, too. Here are the players whose stock is on the rise and some whose stock is already falling after Week 1’s preseason game.

Despite being hit several times, No. 1 overall pick Trevor Lawrence had a solid first game, going 6-of-9 for 71 YDS. 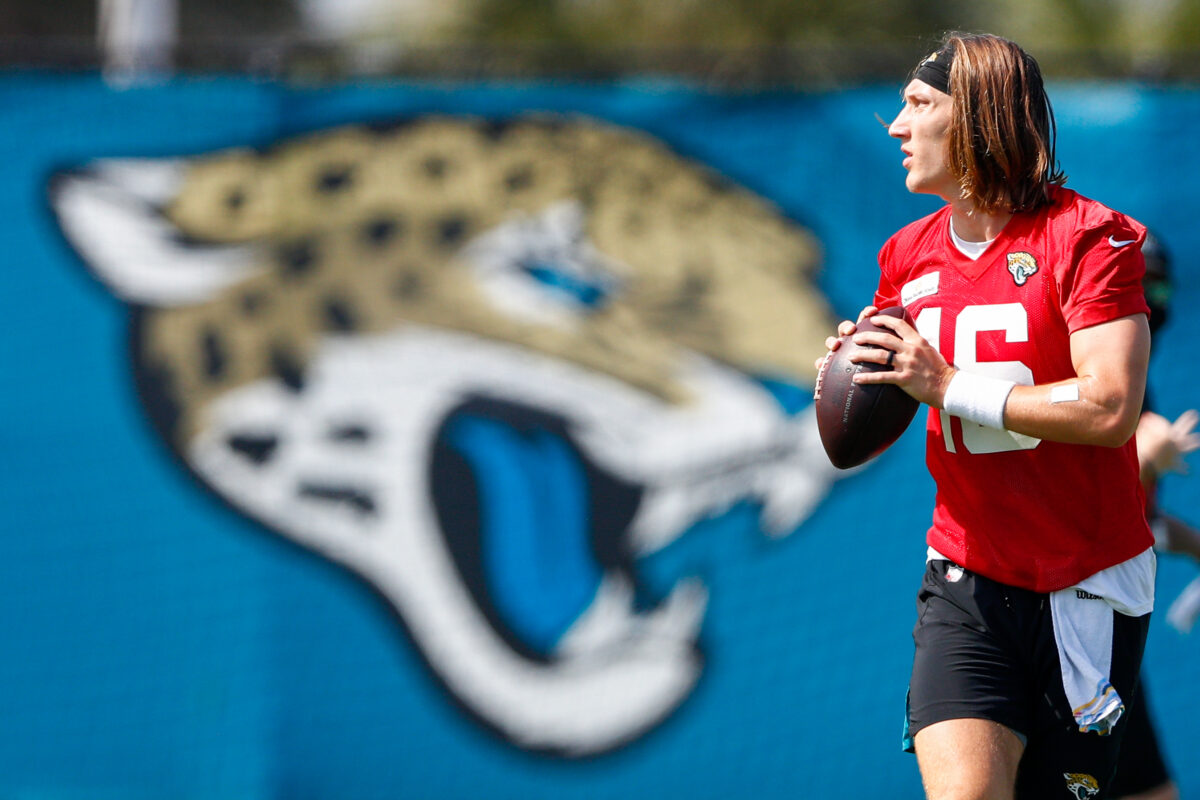 Trevor Lawrence got the nod to start in the Jacksonville Jaguars’ first preseason game against the Cleveland Browns and he gave the fans in attendance a show while on the field. While he was sacked and hit more than fans would like, he had a couple of highlight throws that proved he will be named the team’s QB1 at some point before the regular season starts.

His most notable throw came in the second quarter as he dropped back to survey the field for a third and eight conversion. The receivers initially couldn’t get open, and despite being harassed for much of the night, he hung in the pocket until veteran receiver Marvin Jones Jr. broke loose vertically. Lawrence then read it perfectly as the offensive line gave him plenty of time and uncorked a 35-yard completion for Jones to go up and snag over the defender who wasn’t looking.

This wasn’t the only highlight play of the day for Lawrence as he got fans excited during his first series on the field. After his first play resulted in a sack for seven yards, Lawrence converted a third and nine play two plays later with a 10-yard pass to Jones.

Pressure but Lawrence gets it out to Jones jr pic.twitter.com/vE1PkpAY8w

While everyone would’ve preferred him to be kept clean, Lawrence’s first game was definitely a success. And if anyone had doubts about him being the starter Week 1 against Houston, those doubts should be laid to rest after tonight.