Georgia DI Jalen Carter might have been the best player on 2021’s historic defense. Carter seems ready to be even better in 2022. 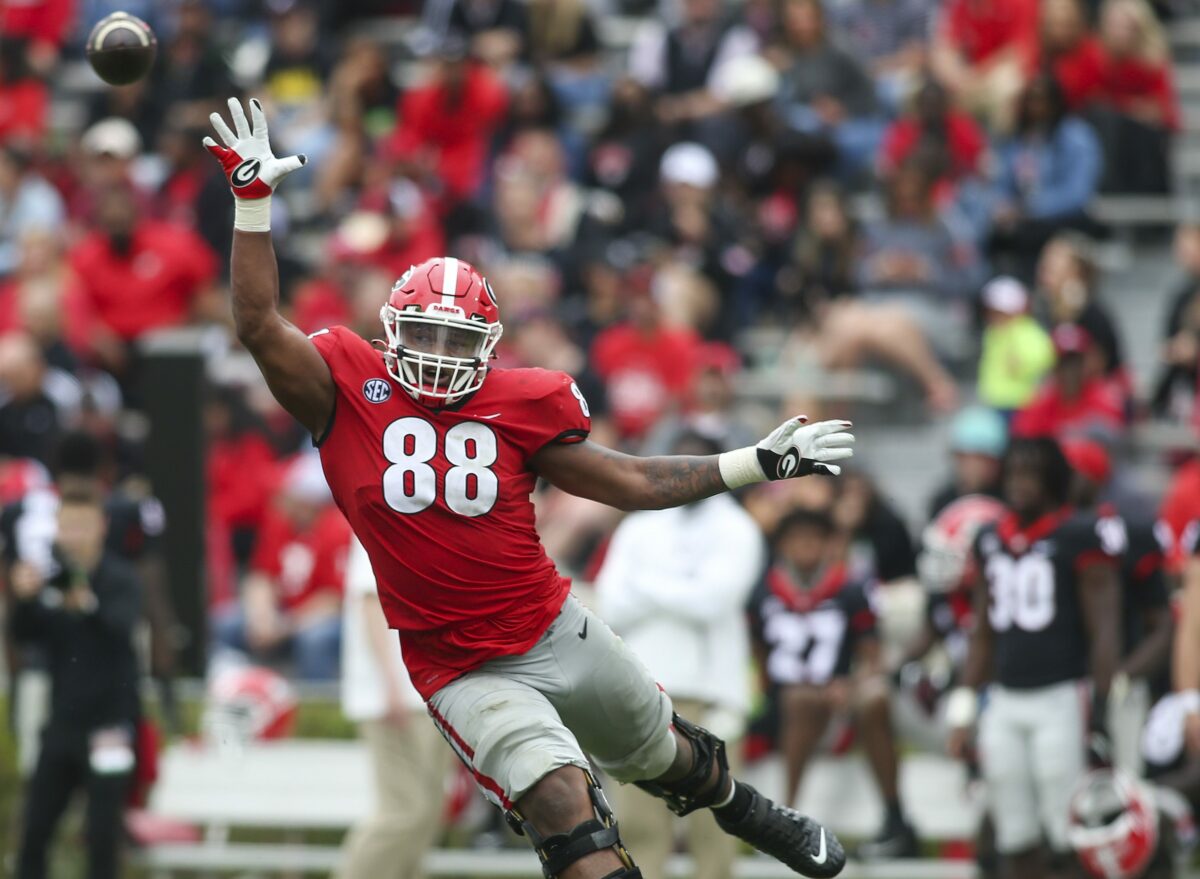 The Georgia Bulldogs’ 2021 defense was historically great, and that reflected in Georgia’s draft status on that side of the ball in 2022. Edge-rusher Travon Walker went first overall to the Jaguars. DI Jordan Davis went to the Eagles with the 13th pick, linebacker Quay Walker went to the Packers 22nd overall, DI Devonte Wyatt also went to Green Bay, this time with the 28th pick, and safety Lewis Cine finished out the first round, going to the Vikings with the 32nd pick.

Five defensive players from one school in one first round? That’s the most ever. Linebackers Nakobe Dean (Eagles) and Channing Tindall (Dolphins) each went in the third round, so if you want to know how great that defense was, and those players were… there’s your answer.

Still, when you ask people familiar with Georgia’s defense, many will tell you that the best player on that defense in 2021 is still on the Bulldogs’ roster. That would be DI Jalen Carter, who’s eligible for the 2023 draft. Last season, Carter totaled four sacks, six quarterback hits, and 24 quarterback hurries. But as we have detailed, you can’t analyze Georgia’s defenders based on pressure numbers; you’ll miss the forest for the trees. You have to watch the tape, and in Georgia’s 2022 opener against the Oregon Ducks on Saturday afternoon, Carter already looked in playoff form. On this tackle for loss, Carter (No. 88) took Oregon’s Malaesala Aumavae-Laulu — all six-foot-6 and 330 pounds of him — and threw him aside like the proverbial sack of potatoes.

The six-foot-3,m 310-pound Carter had a knack for plays like this last season. Here, Georgia Tech’s right tackle tried to keep up with Carter on the edge, and one simple swipe move later, it was all over.

And on this play against Kentucky… well, I’m not sure how the right guard was supposed to deal with Carter’s ungodly combination of quickness across the blocker’s face and speed to the pocket, but it wasn’t this.

And if you’re going to run a simple slide against Carter, as UAB did here, you’re basically bringing a spork to a gunfight.

We’ll get a lot more into Carter’s pass-rushing abilities as time goes on — he seems like a lead-pipe top-three pick if this keeps up, and I had him going second overall to the Texans in my most recent mock draft, behind only Alabama EDGE Will Anderson Jr. to the Falcons first overall. This is just a reminder to Georgia’s opponents that unless you get off the ball very quickly, and you bring all kinds of help to deal with him, Jalen Carter is going to ruin your offense.

A mock draft before the 2022 NFL regular season begins? Yes, because scouting is a year-round endeavor. Here’s how the first round might look next year. 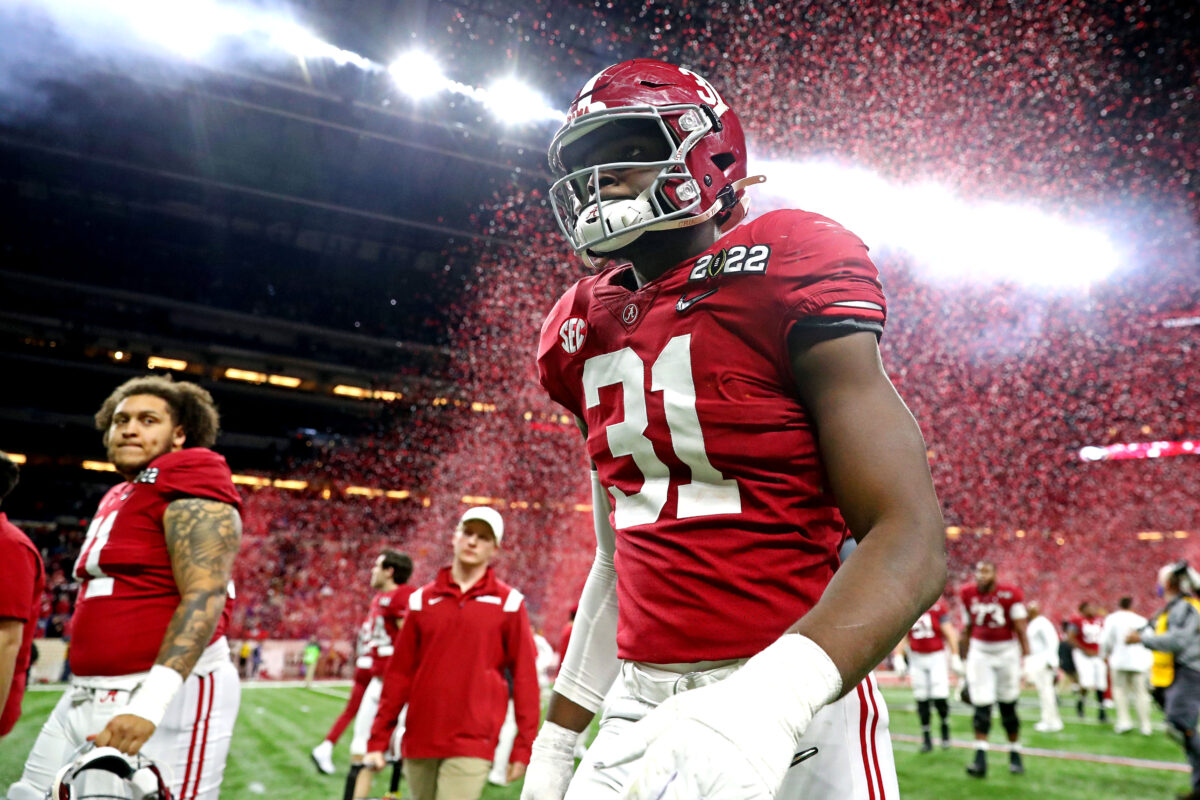 NFL teams obviously don’t start their scouting process for the following year in the following year. It’s a year-round process. Area scouts are readying for the 2022 college football season. Scouting directors are coordinating the whole things, and general managers are crunching a bit of tape whenever they might be able in bite-size pieces around the daily business of getting ready for their own seasons.

One thing that tells all those people what their needs might be in next year’s draft is this year’s preseason. You have a pretty good idea at this point what your team’s strengths and weaknesses are, and while you may get a slight kick from somebody else’s castoff in final cuts, you kind of have what you have unless you’re thinking about making a major trade before the deadline.

With that in mind, here’s how I might assess team needs and prospect availability were I every general manager with a first-round pick in that 2023 draft, using the Pro Football Focus draft simulator. Team slots are based on PFF’s projections.

A few things you’ll notice right off the bat. I am assuming that the Falcons and the Texans will end the 2022 season happy enough with their quarterback situations to avoid selecting Alabama’s Bryce Young or Ohio State’s C.J. Stroud, or whichever NCAA quarterback comes out of nowhere, as one quarterback seems to every year. Same with the Dolphins, who are using their non-forfeited first-round pick elsewhere. After Atlanta and Houston, the real QB-needy teams at the top of the draft — the Lions and Seahawks — act accordingly.

Here’s one person’s version of the first round of the 2023 NFL draft, based on how the 2022 preseason has gone, and how the 2022 regular season might shake out.

Mock draft alert! Now that the NFL has taken one of the Dolphins’ two first-round picks in 2023, here’s how the first round might look. 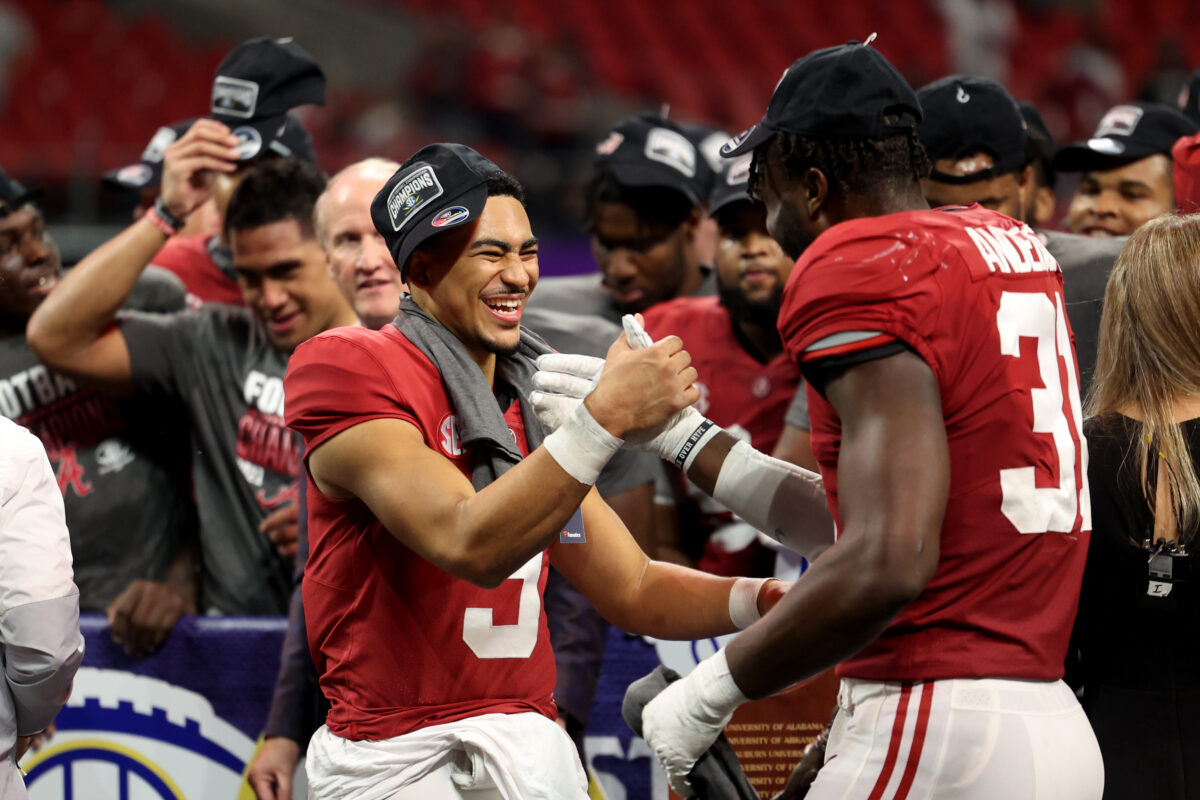 While we’re pretty sure that the rest of the NFL isn’t too happy about the Miami Dolphins barfing all over themselves as a franchise with the embarrassment of an unprecedented tampering scandal, there is the matter of the 2023 first-round pick the Dolphins were forced by the league to forfeit as punishment. That was estimated as the 15th overall pick at this time, and that means that a whole lot of teams get a one-pick bump in the 2023 NFL draft.

The Dolphins still have a first-round pick next year courtesy of the San Francisco 49ers in the trade that allowed Kyle Shanahan and John Lynch to move up and select Trey Lance with the third overall pick in 2021. But Miami obviously has much less leverage to move up next year if the idea was to nab one of the star quarterbacks in the 2023 class, should things not work out with Tua Tagovailoa. Right now, that has the Dolphins sitting with the 23rd pick, and by that time, the highest-profile quarterbacks will obviously be out the door.

How might the 2023 NFL draft look with 31 picks instead of 32, and more than half the first round moving up? Here’s one person’s estimate.