Should Kyzir White have been fined for his forearm to the head of Najee Harris? 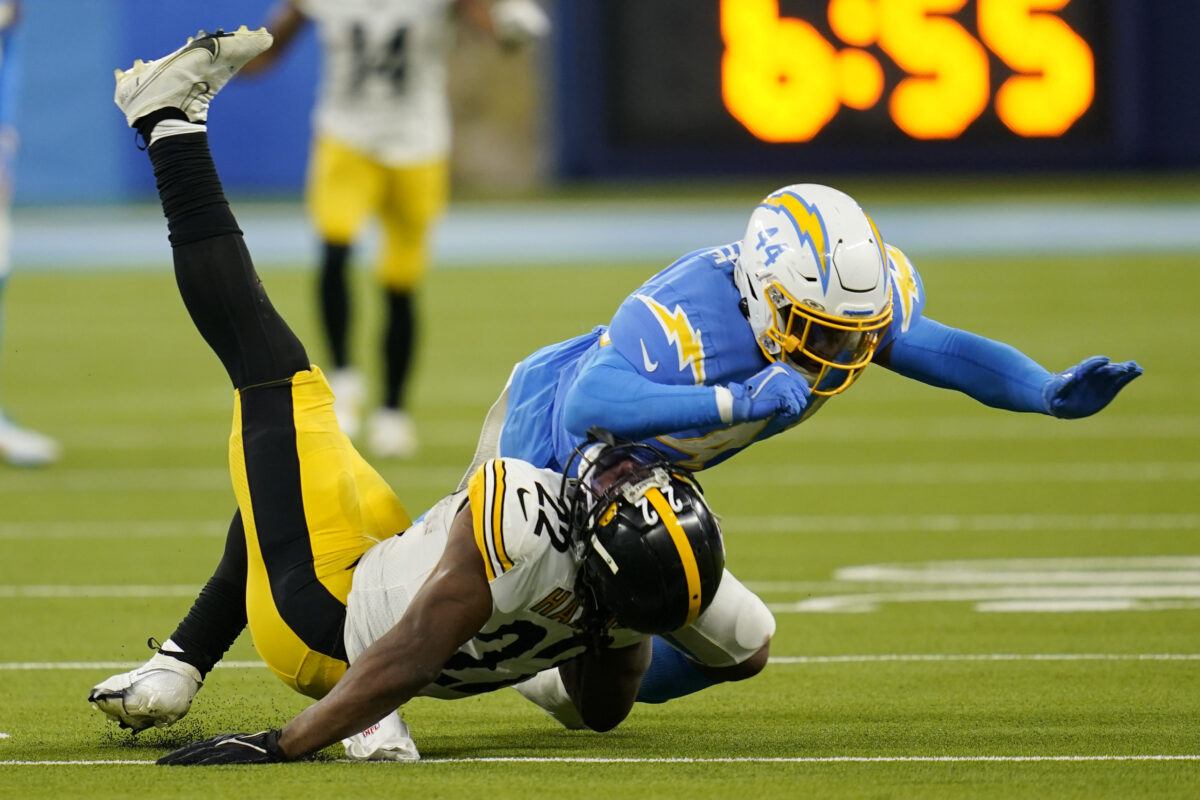 It feels like questioning NFL officiating has become the literal equivalent of beating a dead horse. But in many cases, even when the officials on the field miss an egregious call, it still gets picked up later in the week but the league office and punishment after the fact happens.

This is what everyone thought would happen when the blatant forearm to the head of Pittsburgh Steelers running back Najee Harris by Los Angeles Chargers linebacker Kyzir White didn’t draw a flag.

But that didn’t happen. The same NFL that fines players for staring at an opposing sideline in a menacing manner didn’t feel this hit rose to the level of a violation. Let that one sink in for a minute.

Harris came out of the game for a period of time after the hit and was evaluated for a concussion. Fortunately, Harris was able to return and finish the game.

What do you think? Should think the play have cost White some money or is it just football? Let us know in the comments.

This is such a Dirty Play. Better be a Suspension and Fine @nfl @nflcommish #Steelers pic.twitter.com/ISXStyWo4d

The Steelers didn’t account for all those defensive backups. 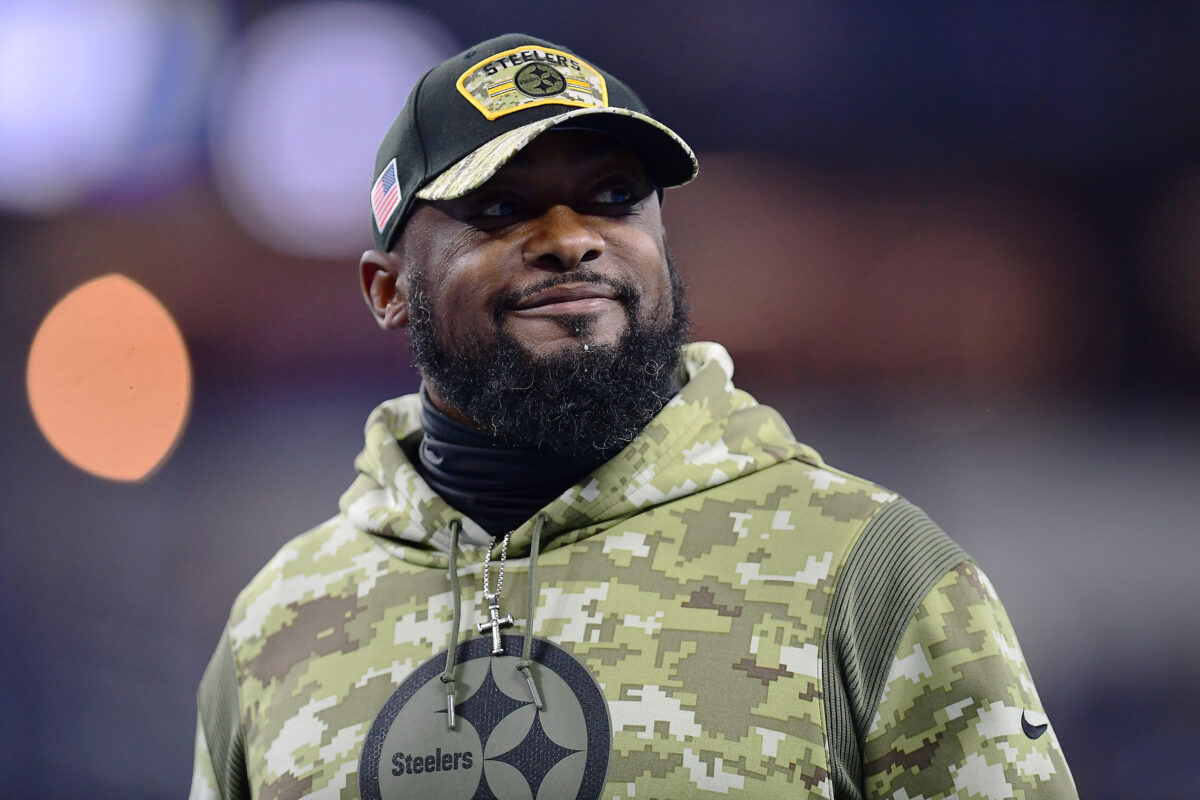 Defensively, the Pittsburgh Steelers were completely outmatched by the Los Angeles Chargers last week. This was due in large part because the defense missed three of its four best players. The absence of safety Minkah Fitzpatrick, cornerback Joe Haden and linebacker T.J. Watt made the defense a shell of its former self.

Having said all that, it did seem somewhat confusing how the coaching staff seemed to make no adjustments to the game plan with all these backups on the field. This was a detail not lost on head coach Mike Tomlin and when he addressed the media on Tuesday admitted this was a misstep by the coaching staff.

“We probably should have done some things differently, out of our personality,” Tomlin noted. The most notable thing that stood out to me was the lack of blitzing. It’s easy to just rush four when you have T.J. Watt out there but without him, the regular pass rush lacked punch.

There was plenty of blame to go around in Sunday’s loss.

Los Angeles Chargers quarterback Justin Herbert has an amazing day on Sunday. Herbert threw for 382 yards with three passing touchdowns and rushed for 90 yards more. Herbert is one of the great young quarterbacks in the NFL and he really showed it en route to the Chargers 41-37 win over the Pittsburgh Steelers.

Just don’t tell head coach Mike Tomlin that. After the game, Tomlin didn’t really want to make what Herbert did so much about him and instead put it back on the Steelers defense for not doing its job.

Herbert took advantage of a patchwork Steelers defense and attacked the secondary with multiple reserves in the lineup. Herbert also took advantage of the fact the Steelers insisted on playing man defense, allowing Herbert huge rushing lanes when the pass rush failed to deliver.

Tomlin nailed it when he said it fell on the team and coaches. But it goes back to well before Sunday. As the flaws with this roster continue to be exposed it shines a light on the front office and its failings in building the depth on this roster.

The Steelers gave up on the run game on Sunday. 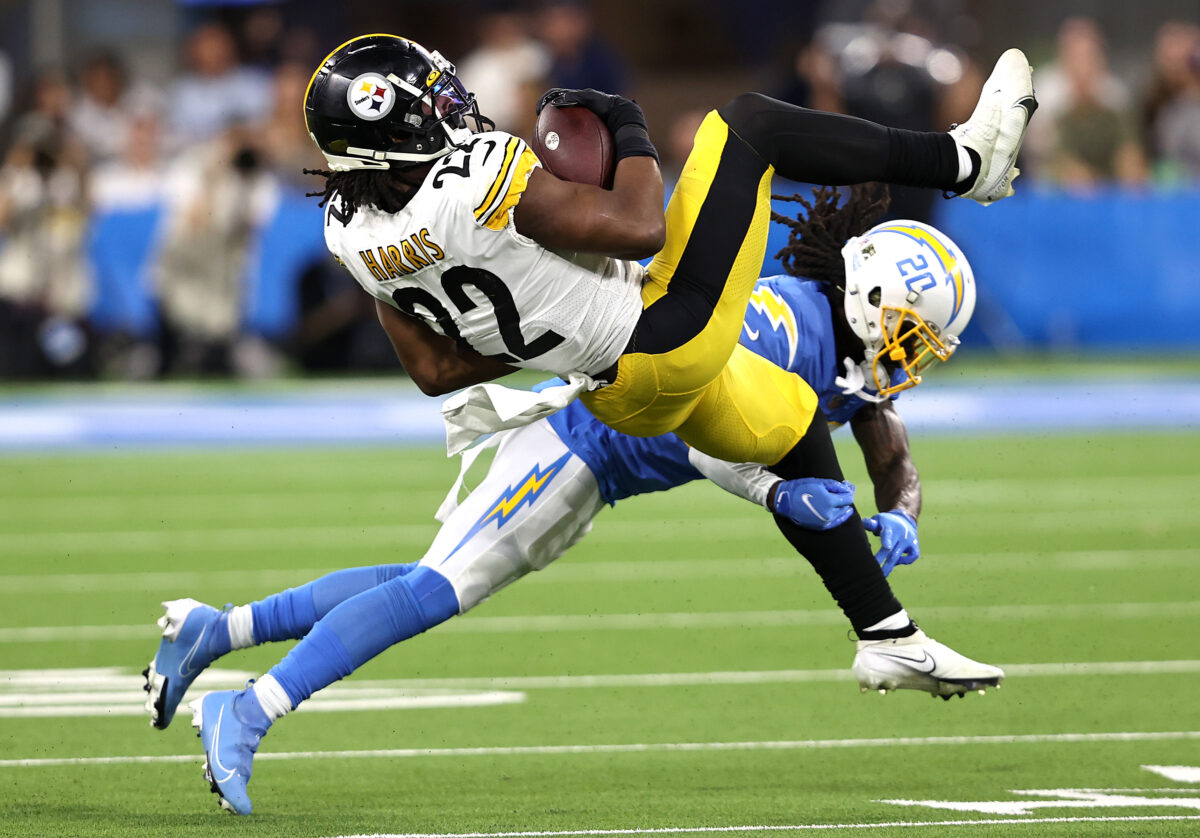 On Sunday, the Pittsburgh Steelers squared off with the Los Angeles Chargers and what started off as s slugfest turned into a shootout. The Steelers ultimately lost the game 41-37 but in going back and reviewing the game, the use, or lack thereof of running back Najee Harris seemed to be completely counterintuitive.

Two games ago, the Steelers basically ran the wheels off of Harris against the Detroit Lions. Harris had 26 carries, his fifth-straight game with at least 20 carries.

But on Sunday night, against the worst rushing defense in the NFL, Harris only got 12. You could make the case the Steelers were behind for much of the first three quarters but for much of the game, things weren’t even close to out of reach.

I assume some of why the Steelers didn’t run more is because the offensive line was struggling, even against a patchwork Chargers defensive front. Nevertheless, the move defied all logic and thankfully Ben Roethlisberger was able to rally the troops in the fourth quarter. Unfortunately, it didn’t turn into a win for the Steelers and this will be a part of the game plan head coach Mike Tomlin needs to address going forward.

Which Steelers stepped up and which fell flat on Sunday. 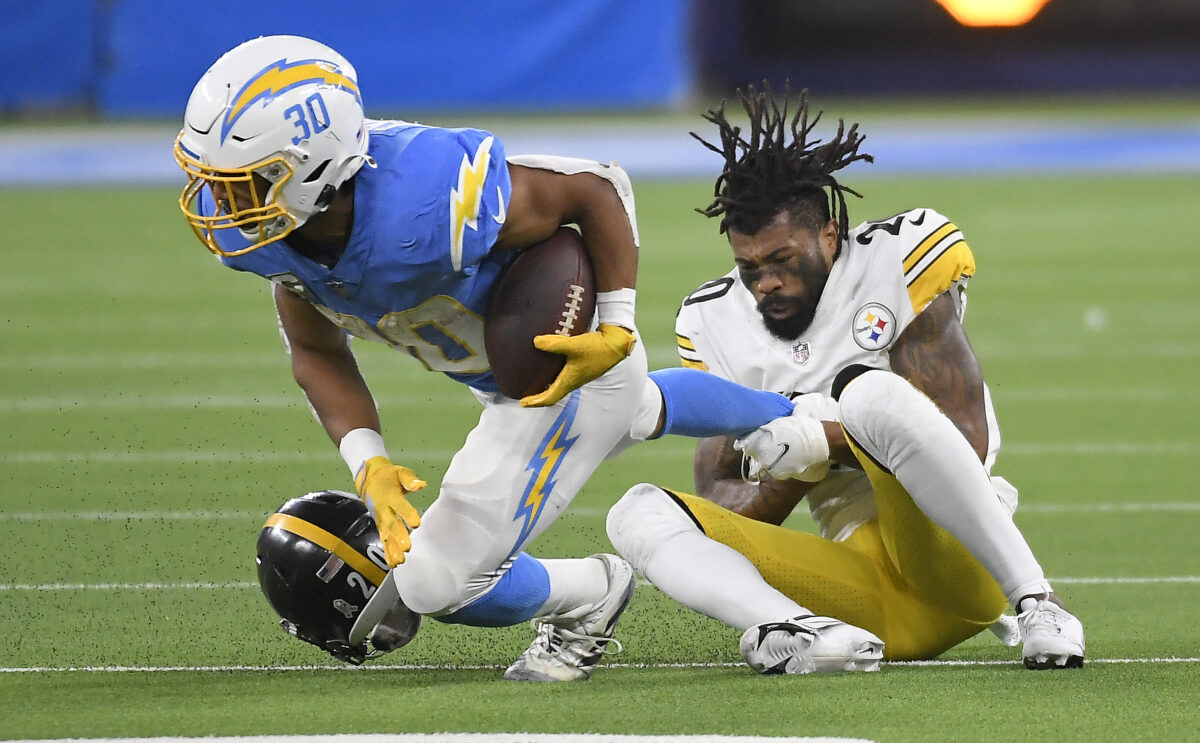 On Sunday the Pittsburgh Steelers spotted the Los Angeles Chargers a 17-point lead before making a valiant effort to come back and pull off the upset. Some guys stepped up and some fell flat. Here are our studs and duds from Sunday’s game. 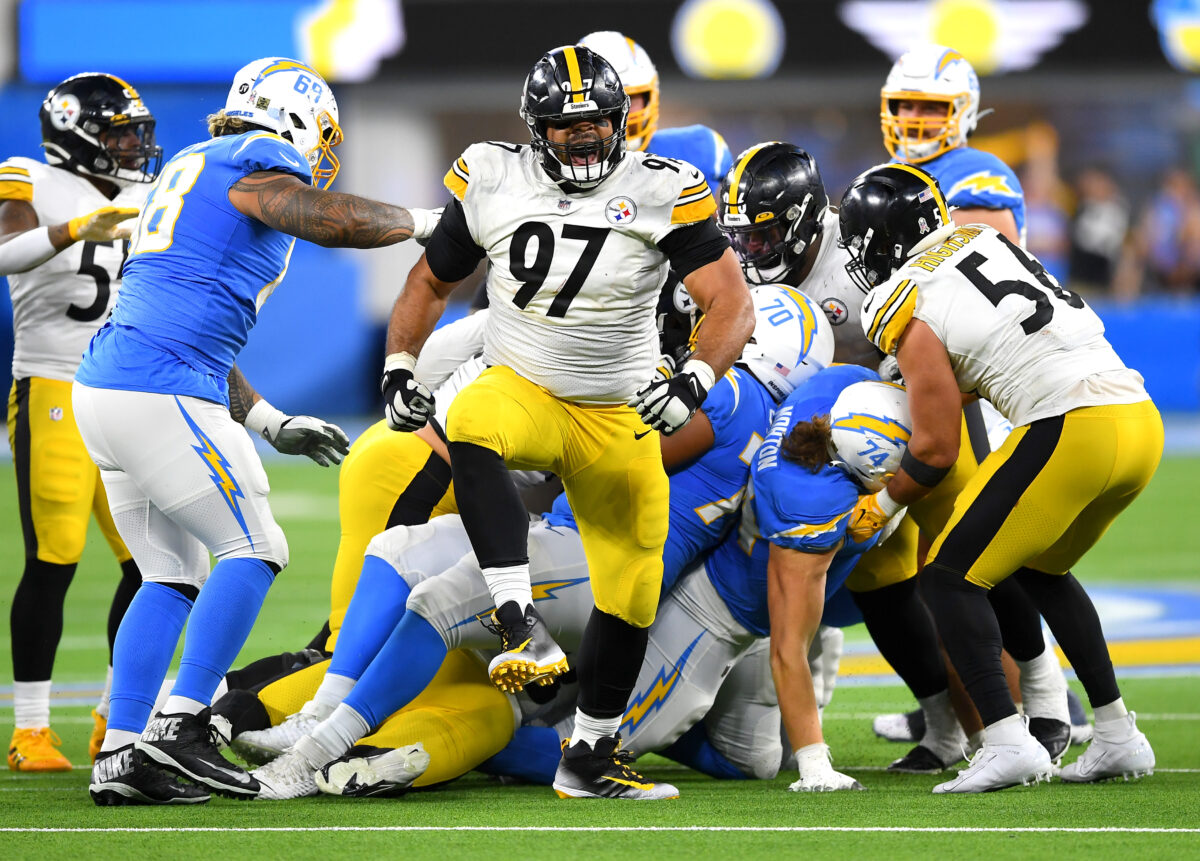 The Pittsburgh Steelers went into Sunday night’s game with the Los Angeles Chargers shorthanded and outgunned. And for three quarters it looked like the game was going to end ugly for Pittsburgh. The Steelers mounted a fourth-quarter rally that came up just short. Here are our big takeaways from the loss.

Ben Roethlisberger made a quick comeback from COVID-19 this past week. 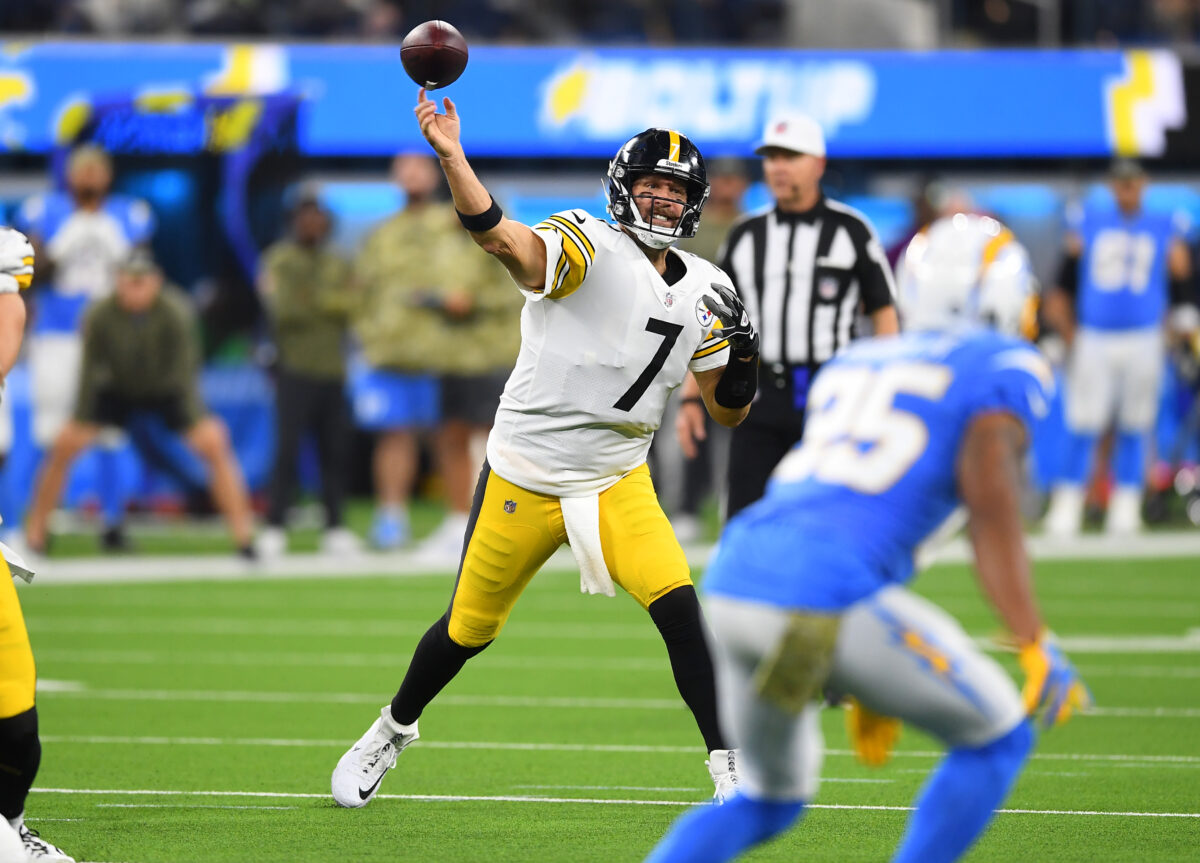 The performance by Pittsburgh Steelers quarterback Ben Roethlisberger on Sunday night was something to be applauded. After testing positive for COVID-19 and being symptomatic, Roethlisberger spent the week away from his team, unable to train or practice.

Saturday morning, Roethlisberger got his second negative test and was cleared to play. He flew out to Los Angeles to join his team and did everything he could to avoid the Steelers 41-37 loss to the Chargers.

How did Roethlisberger turn it around so quickly? He noted in his postgame press conference that lots of vitamins and minerals were his secret. Whatever he used, it worked.

Roethlisberger finished with 273 passing yards on 28-of-44 passing with three passing touchdowns and zero interceptions. Roethlisberger, along with a couple of splash plays by the defense and special teams are the only reasons Pittsburgh was able to score 27 points in the fourth quarter and mount any sort of comeback.

The Steelers were hit with even more injuries on Sunday night. 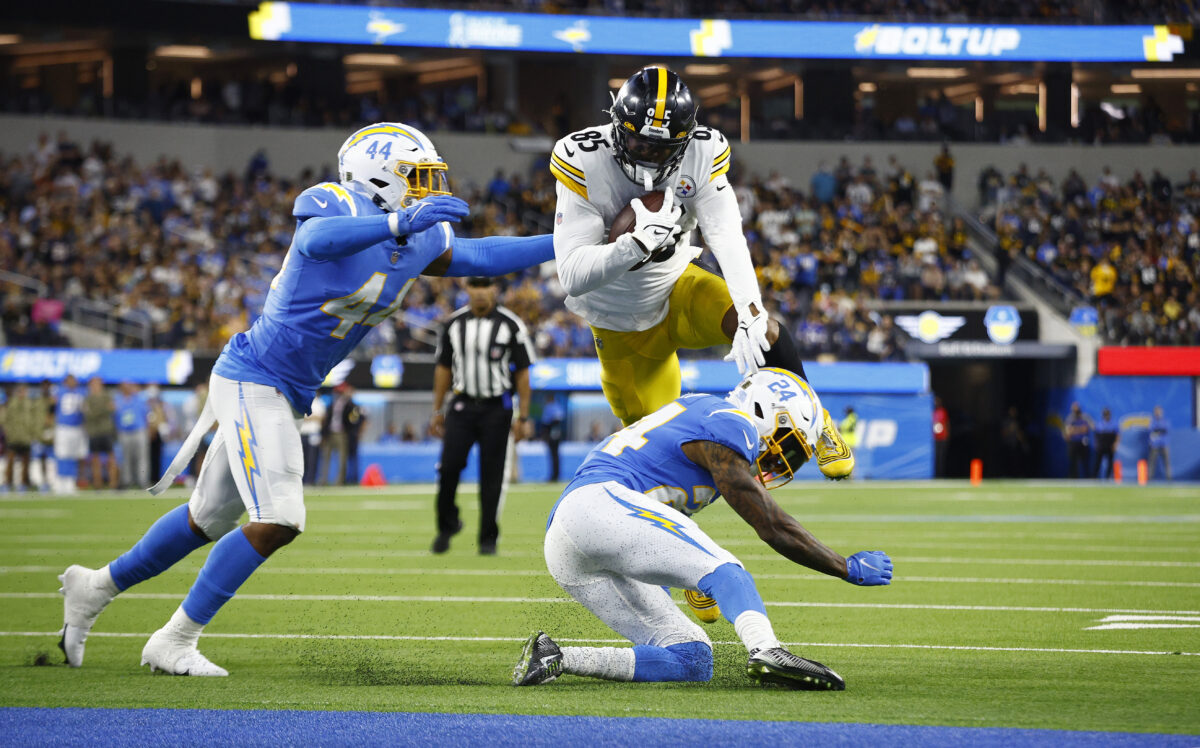 On Sunday night the Pittsburgh Steelers had multiple guys come out of the game with injuries, some of which were able to return. After the team’s 41-37 loss to the Los Angeles Chargers, head coach Mike Tomlin only noted three guys who were going to be evaluated this week for injuries they suffered in the game.

According to Tomlin, tight end Eric Ebron suffered a knee injury, guard J.C. Hassenauer has a pectoral injury and cornerback Arthur Maulet has a neck injury. Ebron seems to have suffered his knee injury on his touchdown late in the game. Maulet actually returned to the game briefly after his injury.

The two players Tomlin didn’t mention were running back Najee Harris and cornerback Cameron Sutton. Both guys took huge hits to the head in-game with Harris actually going back to be evaluated for a concussion before returning for the final drive.

Tomlin should be able to provide updates on all injured players when he meets with the media again on Tuesday.

The Steelers couldn’t complete the comeback against the Chargers. 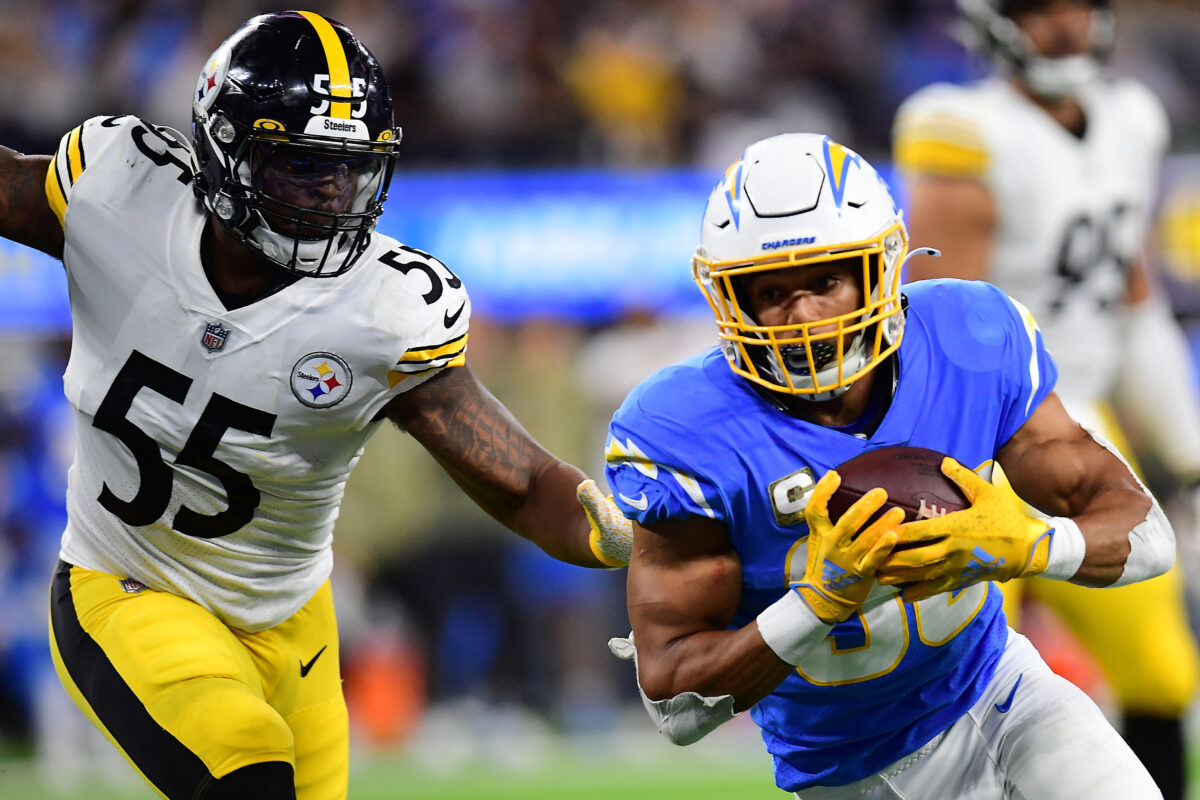 Beating the Los Angeles Chargers on the road was going to be tough for the Pittsburgh Steelers. Doing it with a long list of players out was going to make it even harder. Pittsburgh mounted an impressive comeback in the fourth quarter but completely collapsed on their final offensive drive to lose a shootout 41-37.

The Steelers put up almost no fight at all for three quarters and looked like they were going to get blown out. Injuries and losses on both sides of the football hamstrung both teams but hit Pittsburgh much harder. The Chargers were able to move the ball at will and headed into the fourth quarter with a 27-10 lead.

But thanks to a huge blocked punt along with an interception the Steelers scored 27 points in the fourth to actually take the lead late. However, the defense couldn’t get a stop and even though the Steelers got the ball back with just over two minutes to play, couldn’t capitalize. Two sacks on two plays sealed the loss.

The Steelers fall to 5-4-1 and out of the playoff picture but there’s no time to worry about that. Pittsburgh now has to regroup and get ready to travel to Cincinnati this week for the first of back-to-back AFC North games.

Najee Harris is out with a possible concussion. 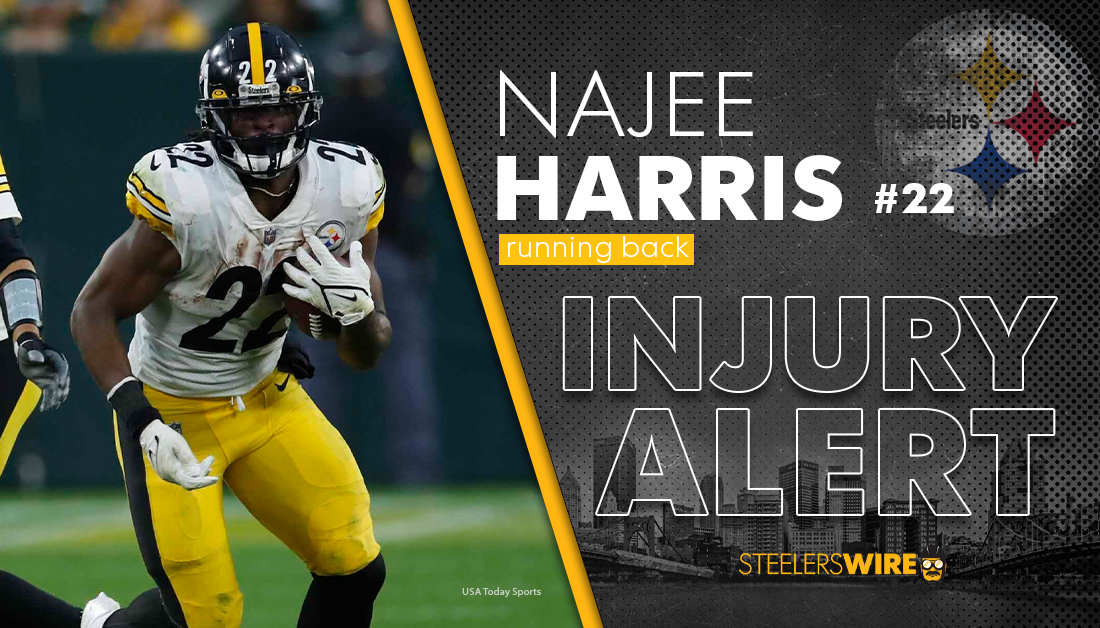 In what is turning out to be a wild game between the Pittsburgh Steelers and Los Angeles Chargers, Pittsburgh will likely have to finish without star running back Najee Harris.

Harris went out of the game late in the fourth quarter after taking a forearm to the helmet on a run. Harris went off under his own power but is currently out and being evaluated for a concussion.