The spread, money line and over/under for Week 9. 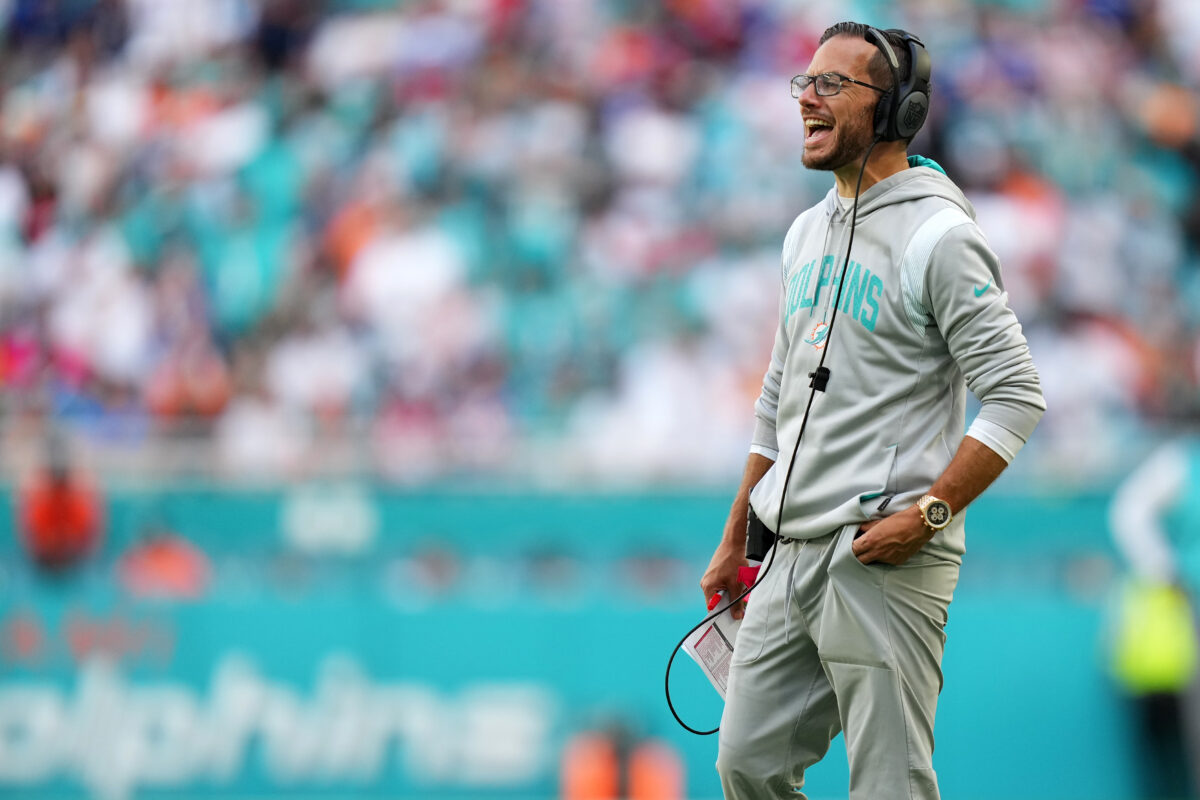 The Miami Dolphins are set to travel to the Windy City for their third NFC North matchup of the year, as they’ll play the Chicago Bears at Soldier Field Sunday afternoon.

According to Tipico Sportsbook, Miami is currently a 4-point favorite for this game. They’re also favorites on the money line, as their victory is set at -210. The over/under for the contest is 46 points.

Mike McDaniel’s team has won back-to-back contests heading into this week, defeating the Pittsburgh Steelers and Detroit Lions with Tua Tagovailoa back under center. The Dolphins’ defense has looked questionable at times, especially with the injuries that have plagued the unit through the first eight games, but they’ve done enough to secure wins.

On the other side, the Bears were smashed back down last week by the Dallas Cowboys, losing 49-29. With the trade deadline passing, they traded away two defensive leaders in Roquan Smith and Robert Quinn, while acquiring wide receiver Chase Claypool from the Steelers. Matt Eberflus’ squad appears to be building for the future, and they seem to be doing a decent job of that.

Here’s how to watch, who’s on the call and a weather update. 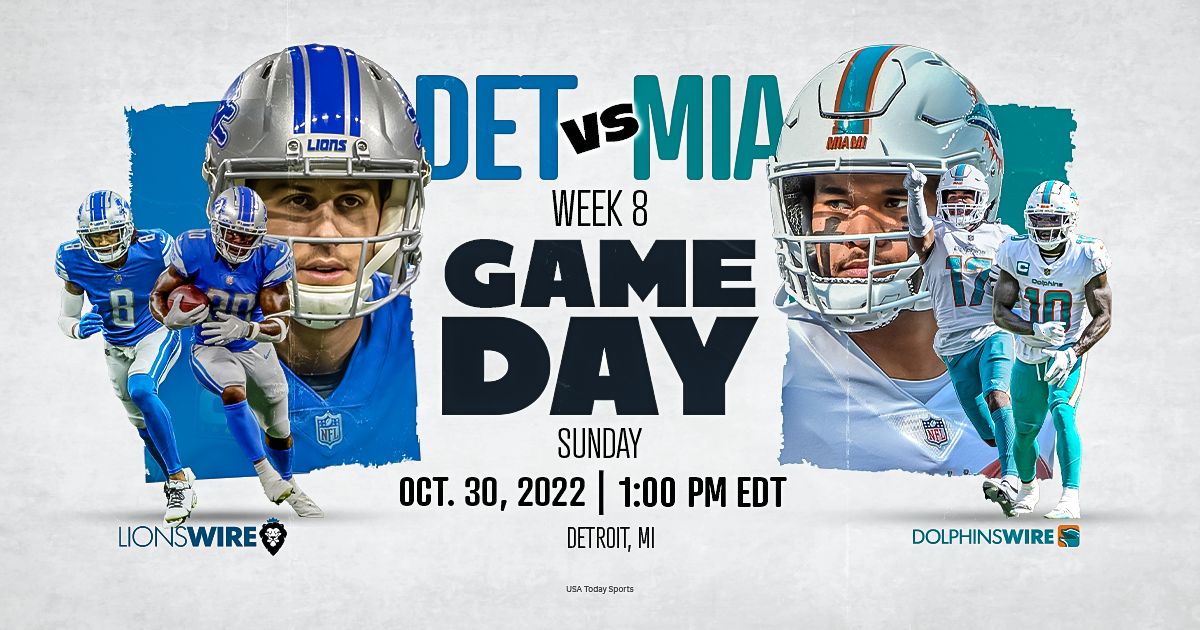 The Miami Dolphins will visit the Detroit Lions this weekend, as the two teams are set to play Sunday afternoon at Ford Field in Detroit, Michigan.

Head coach Mike McDaniel’s team is looking to improve to 5-3 on the season after finally getting back in the win column last week. Injuries have been piling up, but they should still be able to compete with the Lions this week.

For Dan Campbell’s squad, they’re looking to secure a victory for the first time since Week 2 when they defeated the Washington Commanders. Another big day for Jared Goff this season against a Miami secondary that’s missing some key pieces could be exactly what they need to earn that win.

Here’s how to watch:

This game also has the highest over/under of the week. 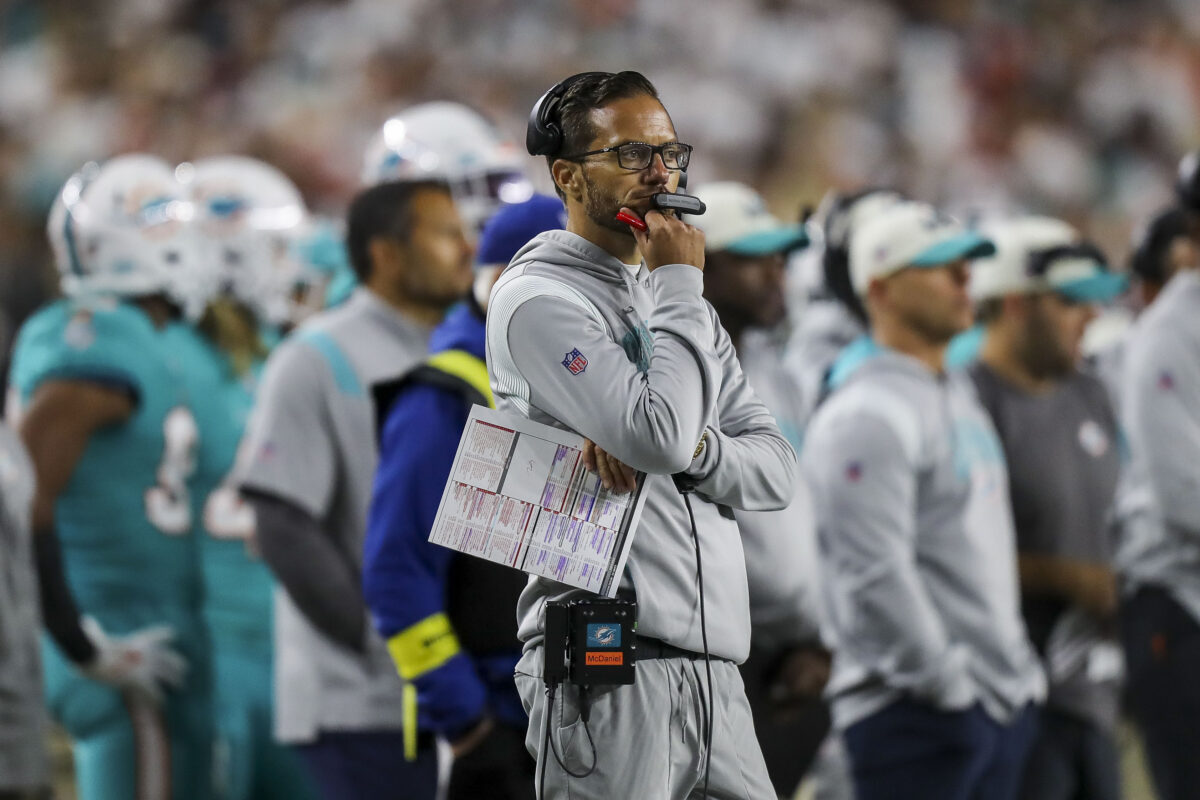 The Miami Dolphins are set to travel to Michigan for their second NFC North matchup of the year, as they’ll play the Detroit Lions at Ford Field Sunday afternoon.

According to Tipico Sportsbook, Miami is currently a 3.5-point favorite for this game. They’re also favorites on the money line, as their victory is set at -190. The over/under for the contest is 51.5 points – the highest this week.

Mike McDaniel’s team earned their fourth victory of the season on Sunday Night Football this past week, defeating the Pittsburgh Steelers. Left tackle Terron Armstead and quarterback Tua Tagogvailoa made their returns to the field, and their play will certainly help against the Lions. However, they’ll need to find a way to sustain some longer drives than they were putting together for most of the Steelers game.

Detroit is 1-5 on the year, but they had been in every game prior to the last two weeks where they’ve been outscored 53-6. Former Dolphins interim head coach Dan Campbell leads the Lions into this contest, and if he continues down the road that their organization is on this year, there’s a chance that he doesn’t make it to a third season.

The spread, money line and over/under for Week 7. 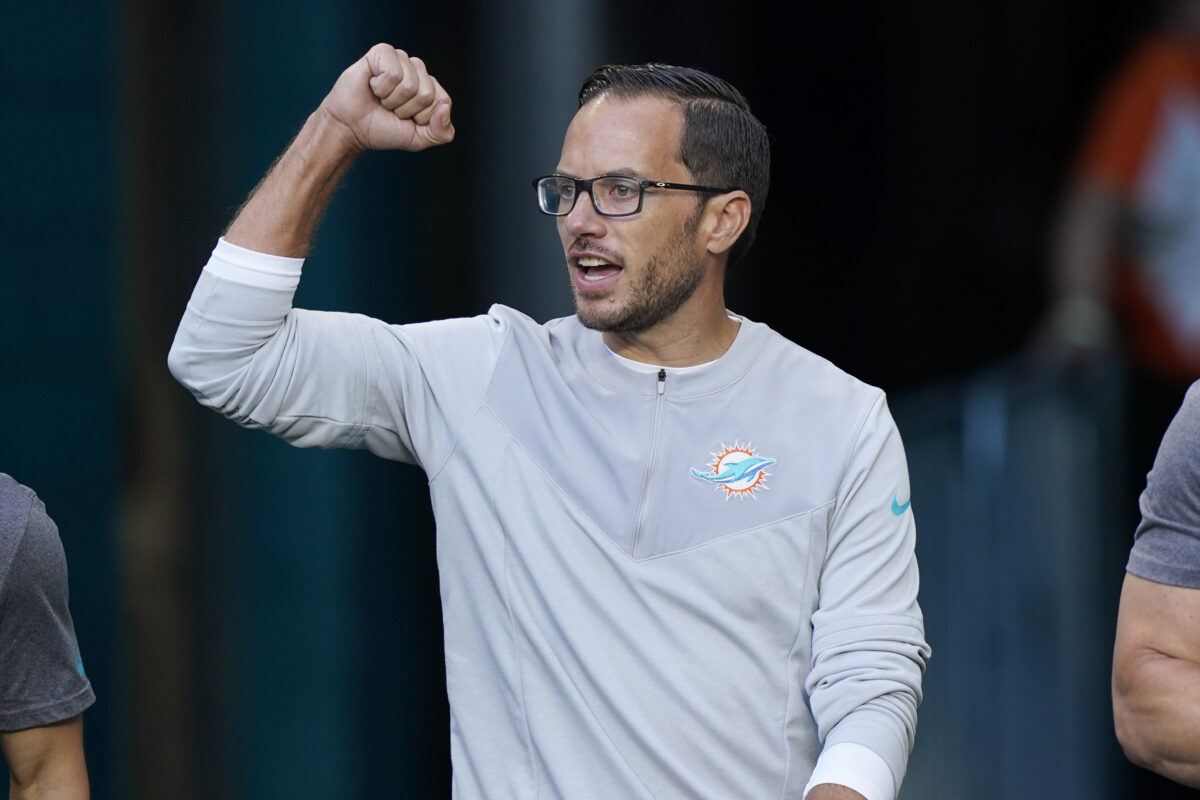 The Miami Dolphins (3-3) are set to host the Pittsburgh Steelers (2-4) for their Week 7 matchup at Hard Rock Stadium on Sunday night.

According to Tipico Sportsbook, Miami is currently 7.5-point favorites for the game. They’re also heavy favorites on the money lines, as their victory is set at -340. The over/under for the contest is 44.5 points.

Mike McDaniel’s team has fallen back to Earth after their first three games. A lot of that has to do with the injuries that they’ve suffered, as they’ve missed quarterbacks for multiple games and dealt with injuries at both tackle spots on the offensive side of the ball. On top of that, the Dolphins have struggled to get out of their own way, committing an excessive number of penalties and turnovers without taking the ball away.

The Steelers’ season has been almost as interesting as Miami’s. They signed former Chicago Bears quarterback Mitchell Trubisky and then drafted Pitt’s Kenny Pickett in the first round with the knowledge that the job would likely be the rookie’s at some point. It took just four weeks, as Pickett took over for a benched Trubisky after halftime of their Week 4 matchup with the New York Jets.

However, Pickett suffered a concussion in last week’s game against the Tampa Bay Buccaneers and Trubisky was able to secure the win. It’s unclear, at this point, who will go on Sunday, but neither signal-caller has been overly impressive so far.

Miami and Pittsburgh will face off on Sunday at 8:20 p.m. ET.

The spread, money line and over/under for Week 5.

The Miami Dolphins are set to travel to New Jersey for their third divisional matchup of the year, as they’ll play the New York Jets at MetLife Stadium Sunday afternoon.

According to Tipico Sportsbook, Miami is currently a 3.5-point favorite for the matchup. They’re also favorites on the money line, as their victory is set at -180. The over/under for the contest is 44.5 points.

The Dolphins are entering this game after suffering their first loss of the season against the Cincinnati Bengals last week. While they’ll be a bit more rested after a mini bye week, they won’t have quarterback Tua Tagovailoa, as he’s already been ruled out with a concussion. It will be up to Teddy Bridgewater, the weapons and the defense to step up and win their third game against an AFC East rival.

Robert Saleh’s team, on the other hand, just got their starting quarterback back on the field, as Zach Wilson made his 2022 debut against the Pittsburgh Steelers. The Jets have surrounded Wilson with some solid young talent, including Garrett Wilson, Corey Davis, Elijah Moore and Breece Hall, now they just need to put it all together and show that they’re a team headed in the right direction. 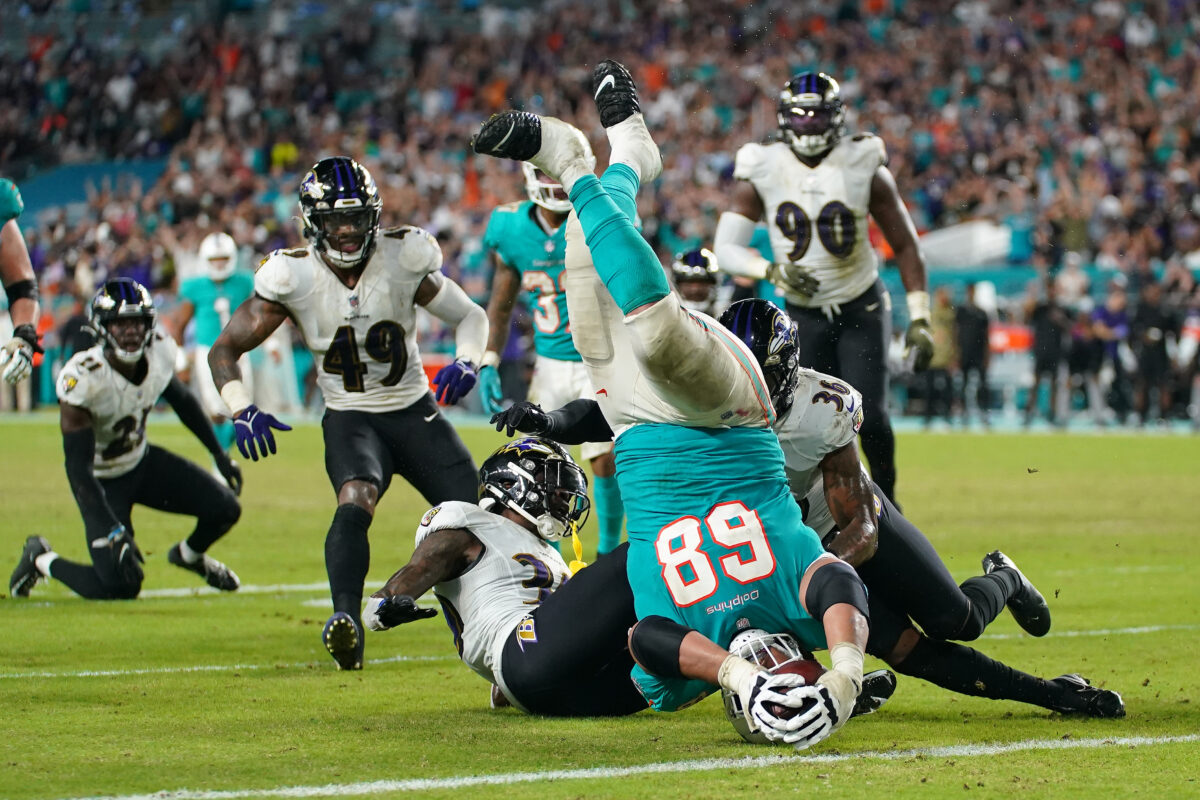 The Miami Dolphins are gearing up for their Week 2 battle with the Baltimore Ravens on Sunday afternoon at M&T Bank Stadium, where the winner will move to 2-0.

According to Tipico Sportbook, the line has remained unchanged throughout the week, as the Dolphins are still 3.5-point underdogs. The money line, however, has shifted slightly. Miami’s victory was originally set at +155 and has moved to +160. The over/under has stayed at 44.5 points.

This game is honestly one of the tougher games to predict this week because both teams have some real strengths, but they’re also dealing with significant injuries at key positions.

The Dolphins have their top three offensive tackles on the injury report as well as impact defenders Christian Wilkins and Brandon Jones.

For Baltimore, they lost Ju’Wuan James last week to a season-ending injury and have yet to get Ronnie Stanley back, while their top three cornerbacks are on the injury report.

Miami and Baltimore will kick off at 1 p.m. on Sunday, but who will win is anyone’s guess.

A look at the spread, money line and over/under. 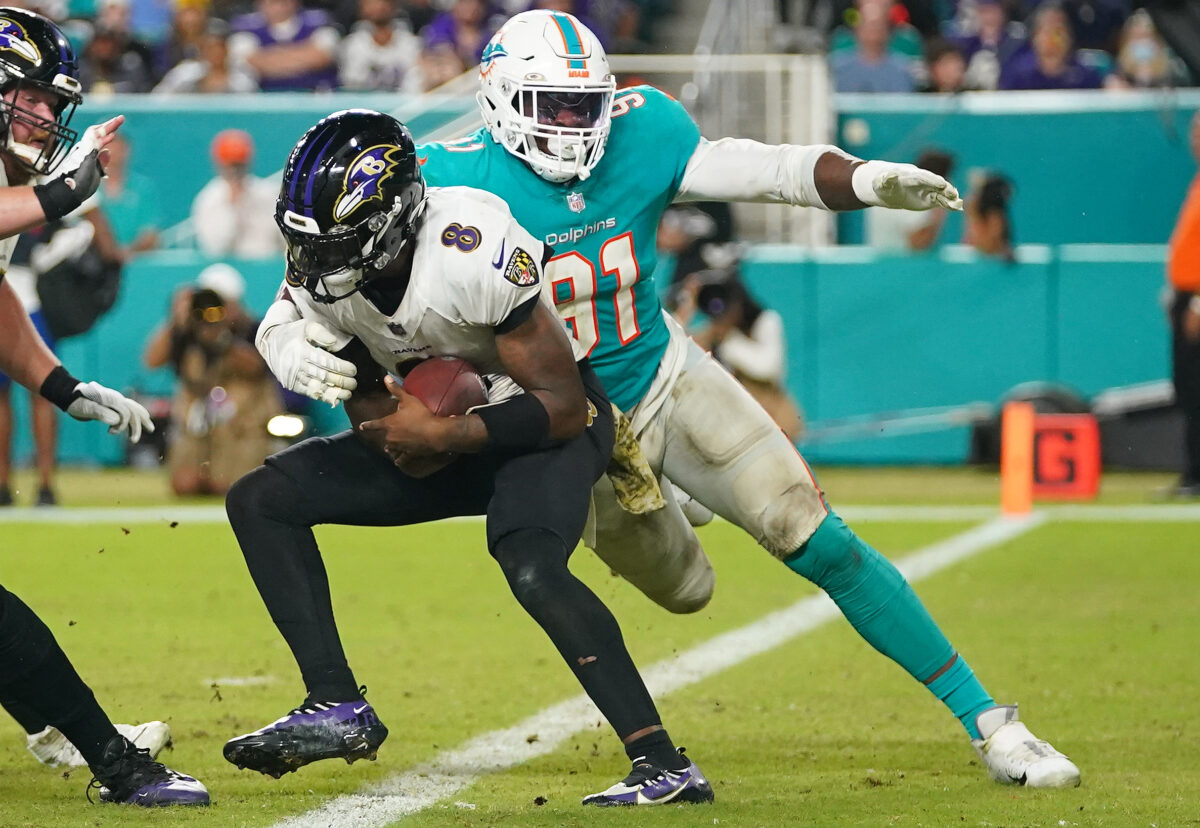 The Miami Dolphins are set to visit the Baltimore Ravens at M&T Bank Stadium on Sunday afternoon for their second game of the 2022 regular season.

According to Tipico Sportsbook, Miami is currently a 3.5-point underdog for the matchup. They’re also underdogs on the money line, as their victory is set at +155. The over/under for the contest is 44.5 points.

The Dolphins are entering Week 2 after defeating the New England Patriots 20-7 in the season opener. Their defense proved to be as fierce as they were in 2021, forcing three turnovers and scoring a touchdown. Miami’s offense, however, will need to step up in this matchup, considering they only scored 13 points against New England’s defense, who lost their best player during the offseason.

Baltimore defeated the New York Jets, led by their former quarterback, Joe Flacco, 20-9 in their first game of the season. Lamar Jackson had a solid day, throwing for 213 yards and three touchdowns. The Jets did a fairly good job of keeping Jackson contained, as he rushed for just 17 yards on six carries.

The Dolphins won this matchup last year without Tua Tagovailoa playing the entire game, but the Ravens are hoping to have some players back from injury since their last battle.

Miami and Baltimore will face off on Sunday at 1:00 p.m. ET.

There’s been a small shift on the money line and over/under. 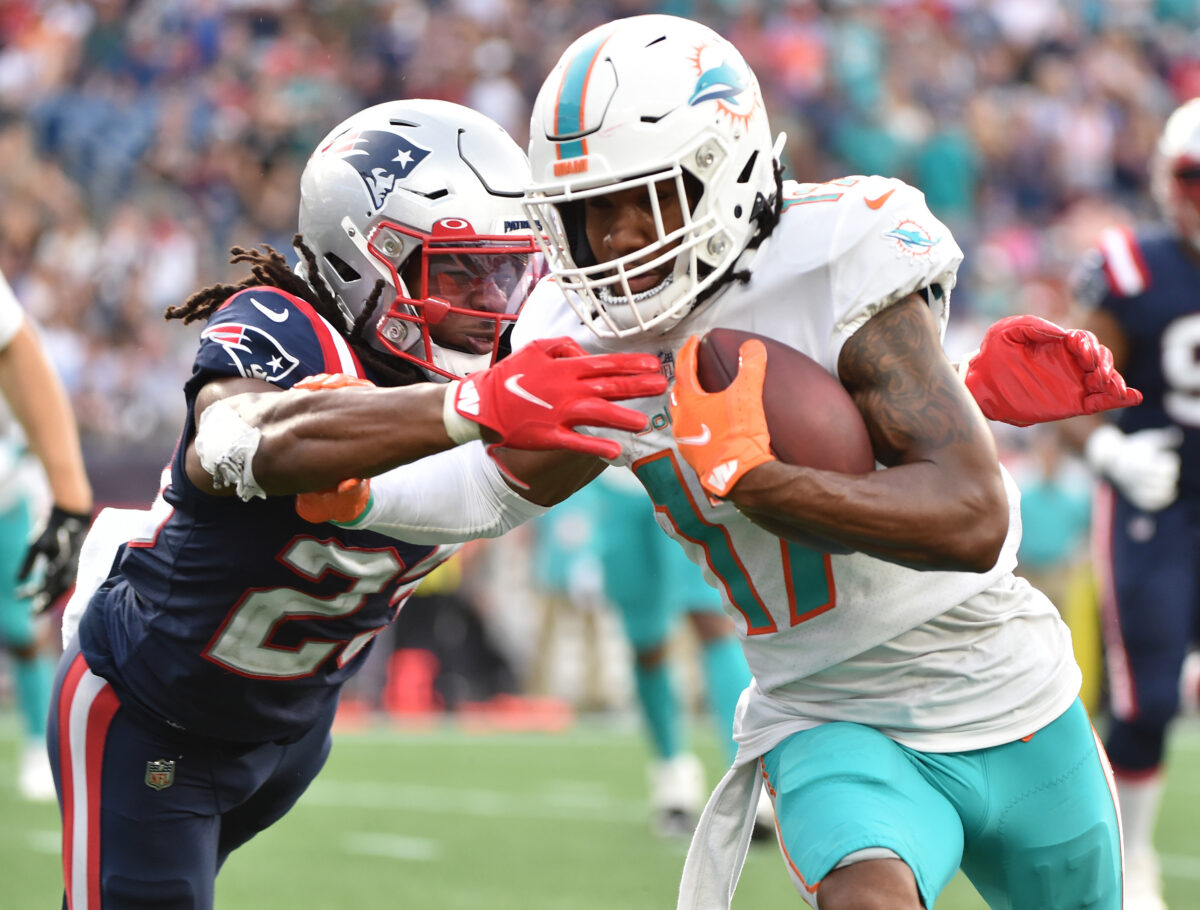 The Miami Dolphins are gearing up for their Week 1 battle with the New England Patriots on Sunday afternoon at Hard Rock Stadium.

According to Tipico Sportsbook, the line has remained unchanged throughout the week, as the Dolphins are still 3.5-point favorites. The money line has shifted slightly. Their victory was originally set at -180 and has moved to -175. The over/under has also dropped from 46.5 to 45.5.

Mike McDaniel’s team has had 12 players on their injury report, including cornerback Nik Needham, whose potential absence could be huge with Byron Jones missing this game on PUP.

The Patriots had four players listed on their injury report on Thursday, including two key offensive players in wide receiver Jakobi Meyers and offensive tackle Isaiah Wynn. If either of those two were to miss the game, a Dolphins’ win would seem even more likely.

Miami and New England will kick off at 1 p.m. on Sunday.

The spread, money line and over/under for Week 1. 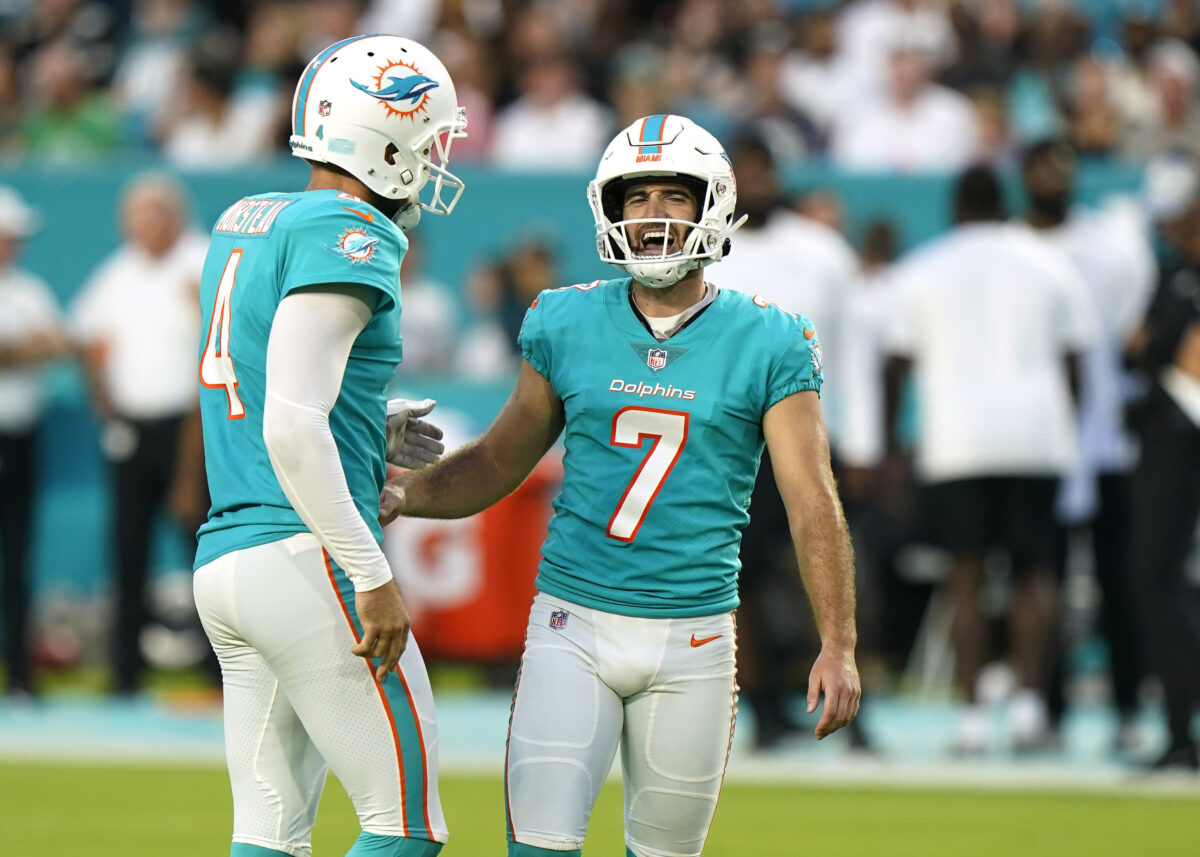 The Miami Dolphins are set to host their first game of the 2022 regular season, with the New England Patriots traveling to Miami Gardens for a Sunday afternoon matchup at Hard Rock Stadium.

According to Tipico Sportsbook, Miami is currently a 3.5-point favorite for the matchup. They’re also favorites on the money line, as their victory is set at -180. The over/under for the contest is 46.5 points.

The Dolphins are entering their first season under head coach Mike McDaniel after Brian Flores was fired despite back-to-back winning seasons. The new coach has brought a new offensive system and positive energy to the building as well as a bunch of talented players at skill positions and along the offensive line.

Bill Belichick’s team is entering 2022 with a lot of questions after losing a number of key contributors and offensive coordinator Josh McDaniels, who has taken the head coach job with the Las Vegas Raiders.

The Patriots reportedly looked lost for long stretches during training camp, and their preseason performances weren’t much better, so it’s not too surprising to see them as underdogs. They’ve lost four of their last five in Miami Gardens, so they’re coming down early to acclimate before the contest.