The Detroit Lions are 1-2, but they have an offense that should be the envy of the rest of the league.

The 2922 Detroit Lions are 1-2 and at the bottom of the NFC North after the first three weeks of the season, so it may seem odd to write an entire article about how awesome Detroit’s offense is. But it’s important to evaluate the process as opposed to the outcome. The Lions lost 38-35 to the Philadelphia Eagles in the opener, and the Eagles look very much like a Super Bowl team. They then beat the Washington Commanders, 36-27, and that’s what you want to do when you’re a team on the rise — beat the teams beneath you in the pecking order.

Sunday’s 28-24 loss to the Minnesota Vikings was the real killer; Detroit had a 24-14 third-quarter lead, and they then let it get away. We don’t really know what the Vikings are yet, just as we don’t know what the Lions are. But what we do know is that the offense led by head coach Dan Campbell, offensive coordinator Ben Johnson, and assistant head coach/running backs coach Duce Staley, has brought an entirely new energy and productiveness than we’ve seen before.

Atypically, the strength of this offense is the run game, and everything works off that. Even in the Vikings loss, the Lions ran the ball 35 times for 139 yards and two touchdowns, and though they were more efficient and explosive in the passing game against Minnesota, those explosive plays were built to a great degree off that run threat.

We’ll get to that in a bit, but let’s start with how the Lions are killing defenses with run concepts of every stripe, in every situation.

“It goes back to thought process,” Staley said last week, when asked why this rushing attack is working now, when it didn’t in previous years. “It goes back to OTAs, training camp, and making a commitment. And not just the players making a commitment, the coaches also. So, you see [offensive line coach] Hank [Fraley], myself being – everybody, you make a commitment to run a ball, you just – you spend a couple extra hours in the office trying to get it right.”

The multiplicity of concepts are most impressive, especially with injuries all over their offensive line. Let’s start with how Detroit’s run game beats defenses from the head down. 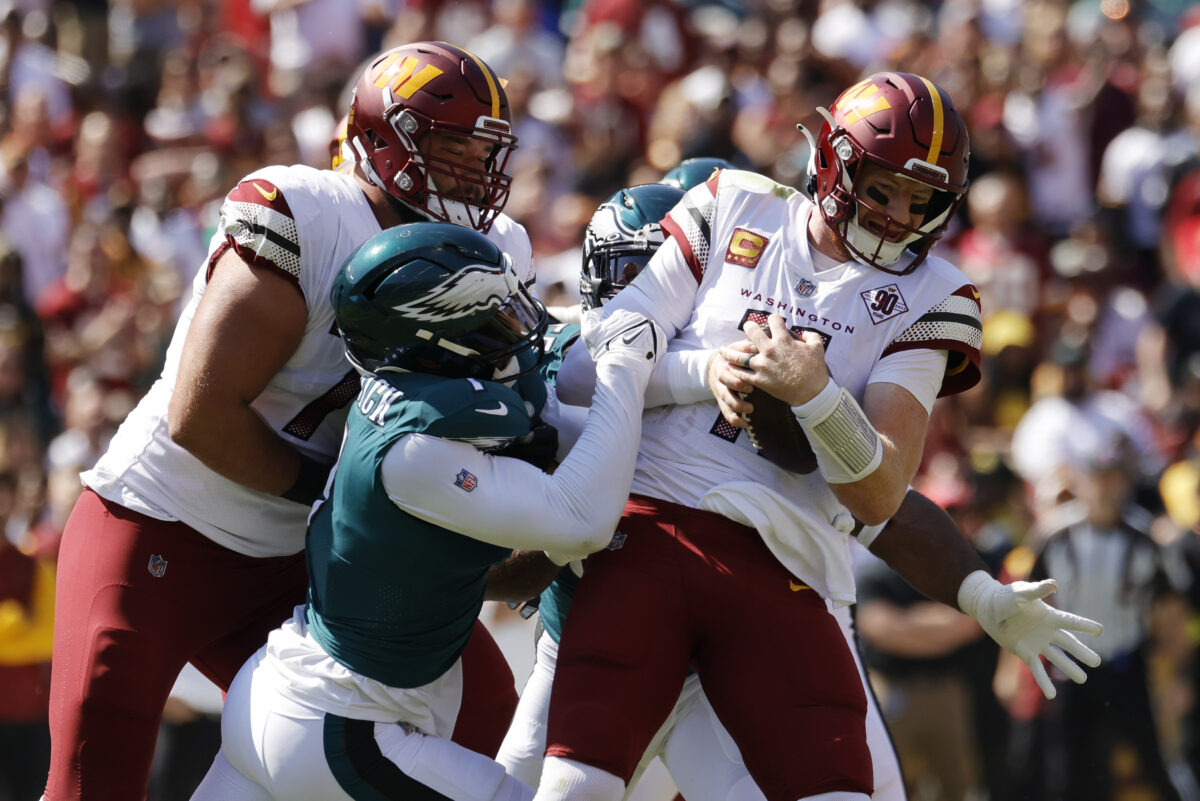 Someone must have told the Philadelphia Eagles’ defense they were the welcoming committee Sunday in the backfield of Carson Wentz and the Washington Commanders.

The Eagles were sacking their former quarterback left and right, heading into the third quarter with six.

Brandon Graham, Haason Reddick, and Fletcher Cox each had 1.5.

Wentz had plus 28 passing yards and minus-40 sack yards.

On the offensive side of the ball, DeVonta Smith was lighting up the Commanders’ secondary to the tune of 169 yards midway through the third quarter.

DEVONTA SMITH YOU ARE INSANE 😱 (via @NFL)pic.twitter.com/37AkMlQdEK

They put the Batman cape on @DeVontaSmith_6 😂 pic.twitter.com/zSx9HUizEH 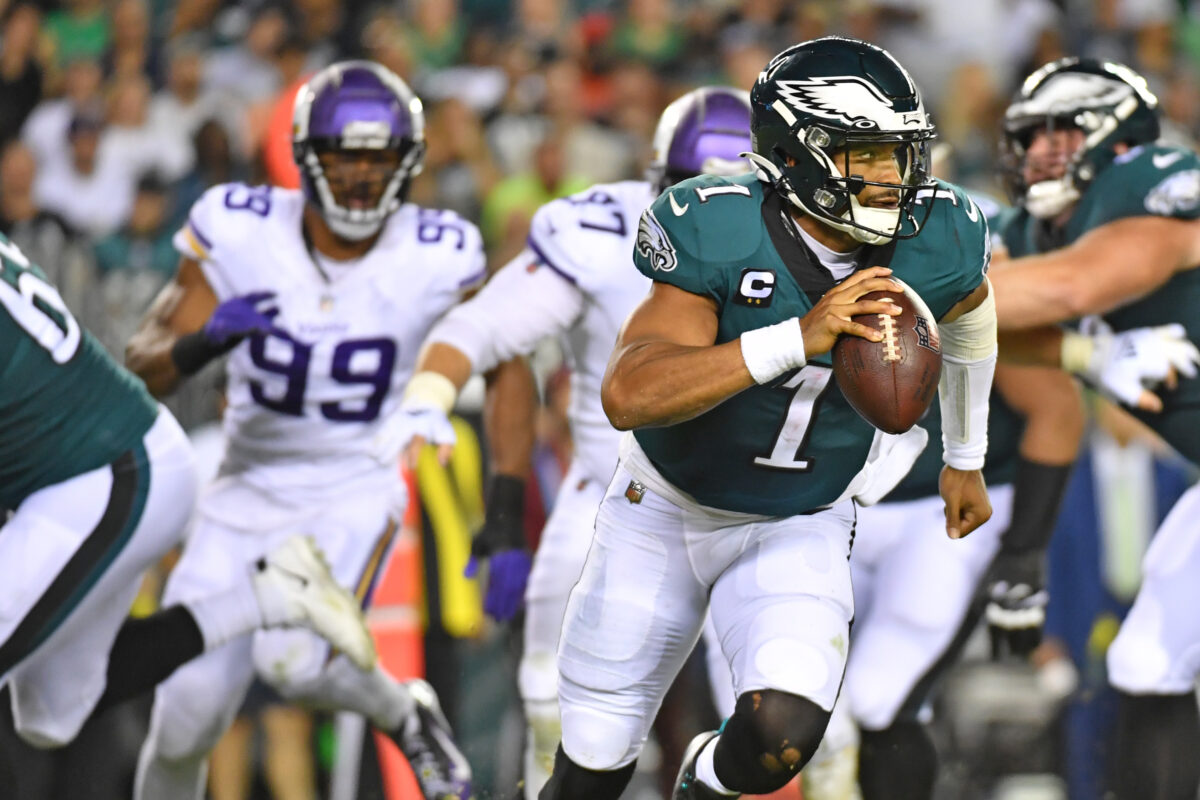 Going into the Monday Night football game versus the Minnesota Vikings, the Philadelphia Eagles knew that there was a lot of pressure on their quarterback Jalen Hurts to prove himself. It was also up to offensive coordinator Shane Steichen to provide him with the tools for success.

Hurts ended up completing 17 out of 20 passes for 251 yards and a touchdown through the air. On the ground, he rushed for 50 yards and two touchdowns. Hurts ended with an 83% completion percentage and a QBR of 108.7.

We can confidently say that it was one of his most complete games as an Eagle.

Let’s go into the film and break down how Hurts was able to slice through the Vikings defense to come out with a dominating win under the lights!

Eagles cornerback Darius Slay opened up a can on Kirk Cousins, Justin Jefferson, and the Vikings’ formerly dynamic offense. 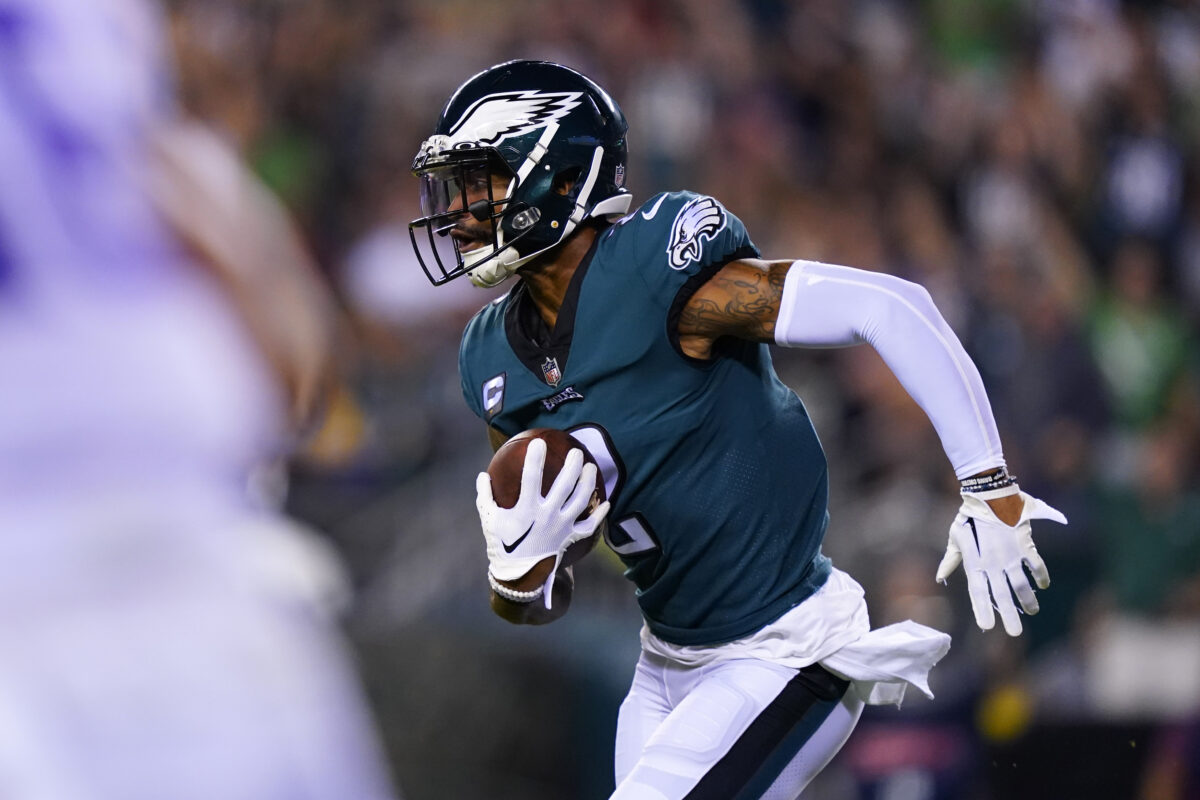 In their season opener against the Green Bay Packers, the Minnesota Vikings went off on offense to the tune of a 23-7 thrashing. Vikings wide receiver Justin Jefferson particularly tortured Green Bay’s defense, which had the weird idea to put everybody but Jaire Alexander, their best cornerback, wherever Jefferson went.

Jefferson’s response as one of the NFL’s best receivers was to catch nine passes on 11 targets for 184 yards and two touchdowns.

The Packers didn’t have a plan for Justin Jefferson, and it showed

The Eagles came into Monday night with a different plan against the Vikings: They were going to put their best cornerback (Darius Slay) on Jefferson as much as possible. Sounds like a radical strategy, but it worked to perfection.

Per Next Gen Stats, Jefferson caught one pass on five targets with Slay as the closest defender, and Slay intercepted two of those targets.

Darius Slay had more interceptions (2) than receptions allowed (1) as the nearest defender on 5 targets to Justin Jefferson.

The Vikings lost -11.9 EPA on the 5 targets, the most in any WR-CB matchup in a game over the last 6 seasons (min. 5 targets).#MINvsPHI | #FlyEaglesFly pic.twitter.com/xApKRStxg5

Slay’s first pick came early in the second half. Quarterback Kirk Cousins may have expected Jefferson to work across Slay’s face, but that didn’t happen, and Slay had a very easy pick.

Halfway through the fourth quarter, Cousins attempted a fadeaway jumper to Jefferson in the left corner of the end zone, and Slay took advantage of the fact that Cousins just couldn’t get enough on it.

.@bigplay24slay with his 2nd interception 🗣

At this rate, other NFL teams might try putting their best cornerbacks on Minnesota’s best receiver. You just never know.

What lucky fan wound up with the ball after a Darius Slay interception? 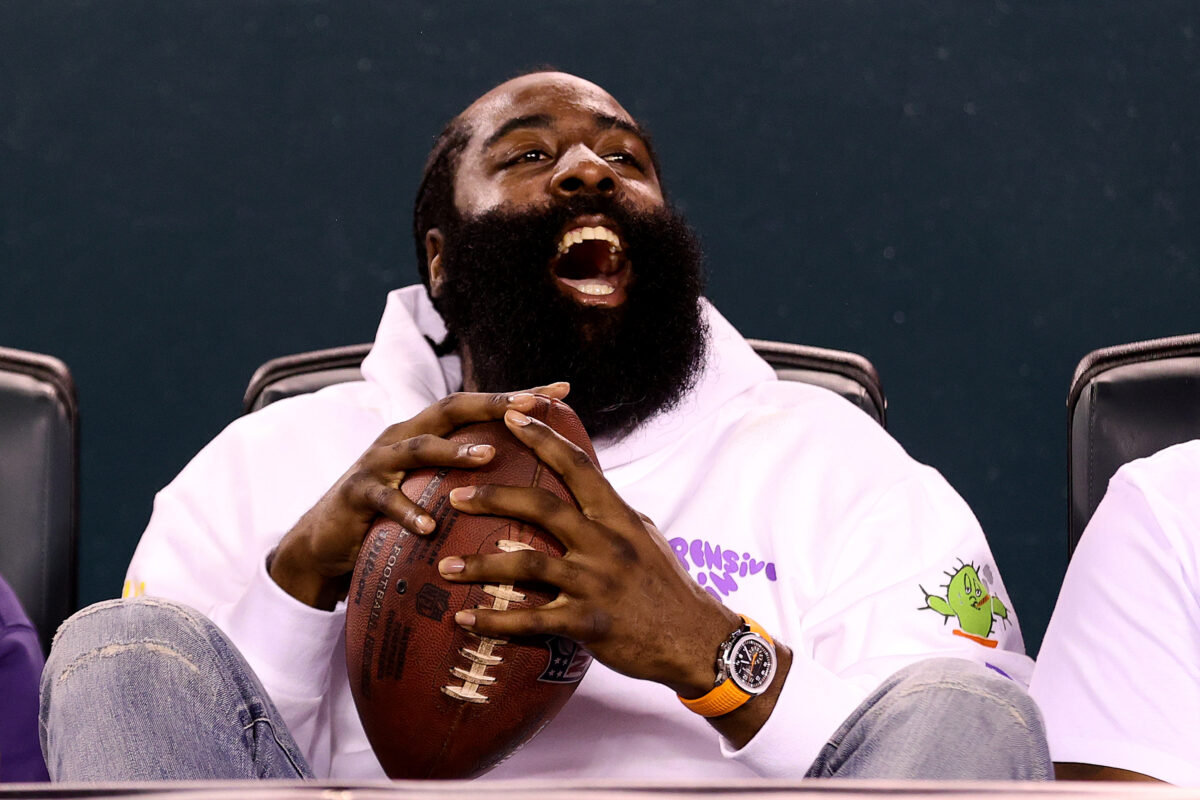 Darius Slay picked off a Kirk Cousins pass at the goal line in the third quarter of the Philadelphia Eagles game at the Linc with the Minnesota Vikings on Monday.

Slay handed the football to a person who knows what to do with a basketball in Philadelphia, 76ers guard James Harden. 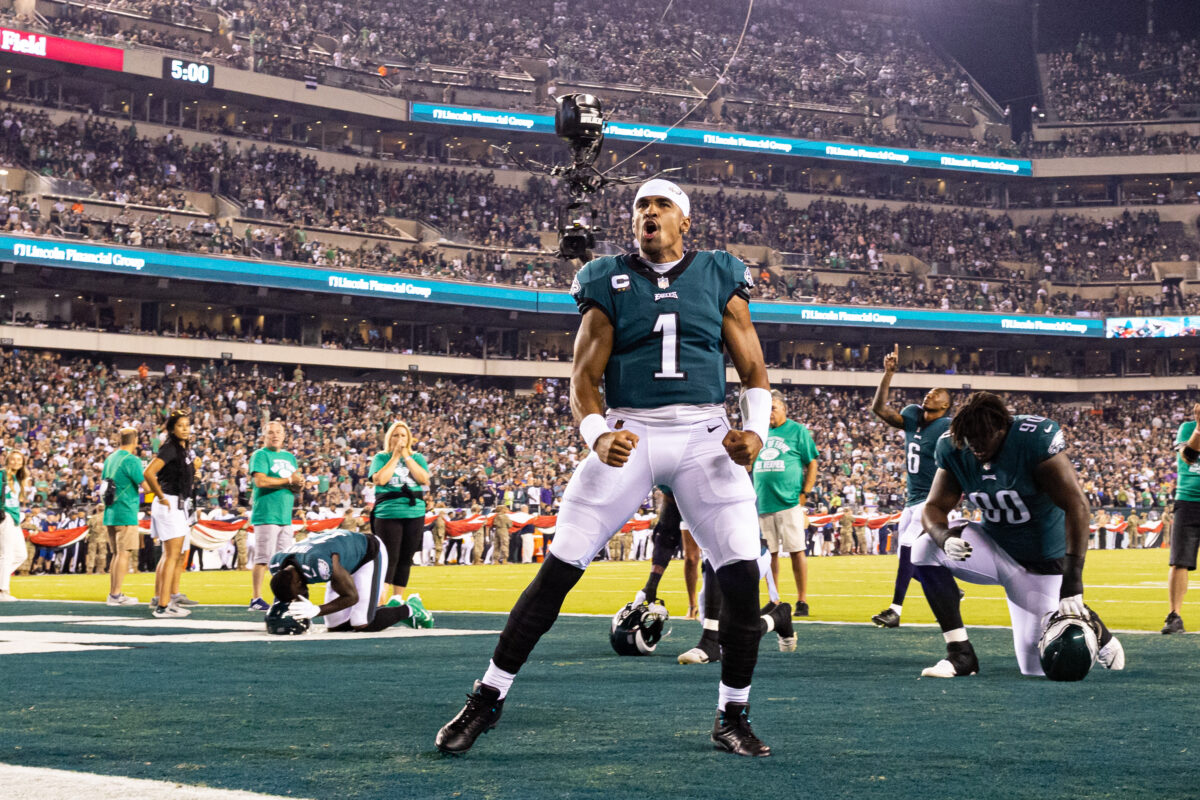 Jalen Hurts has the Philadelphia Eagles off to a stunning start at the Linc on Monday.

The quarterback scored on a 3-yard run to give Philly a 7-0 lead.

He then completed his 10th straight pass to start the game.

The throw found Quez Watkins and was good for 53 yards.

The Eagles were out to a 14-0 lead over the Minnesota Vikings. 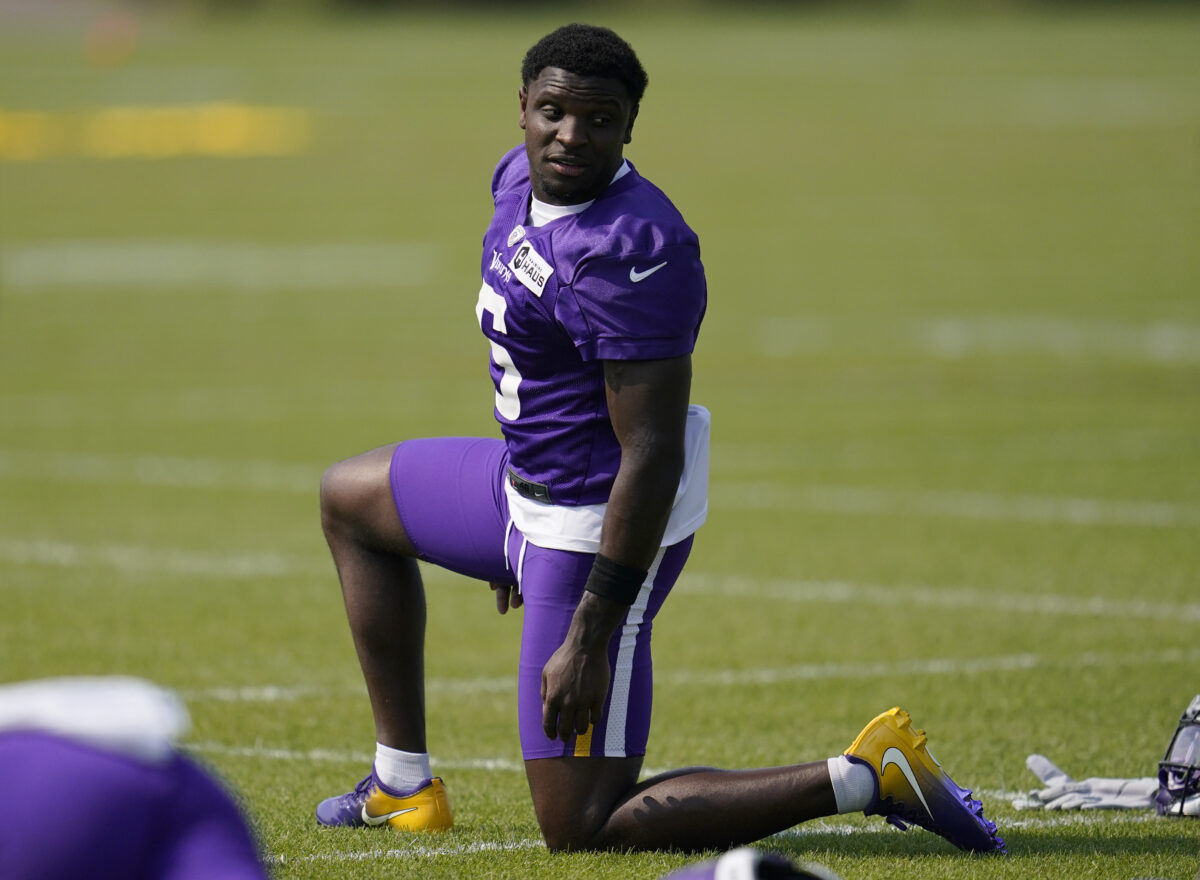 Ever since their NFC Championship matchup in the 2017 season, the Minnesota Vikings and Philadelphia Eagles have their games circled on the calendar. With the Vikings taking the last two wins (2018, 2019) the Eagles will be looking for revenge.

Eagles head coach Nick Sirianni on Monday Night Football vs. Minnesota: “I remember there was a pretty special game here back in 2017 — Vikings vs. the Eagles in the NFC Championship game. [Defensive coordinator Jonathan] Gannon still talks about it, about how loud it was, how intense it was.”

Keep in mind that this is the first home game at the ‘The Linc’, Lincoln Financial Field for the Eagles.  It can get pretty intimidating playing in front of the Eagles fans, especially with the expectations that come with the 2022 season.

There are a few players to look out for on both sides of the ball, so let’s get to it!

DB James Bradberry puts points on the board for the Eagles 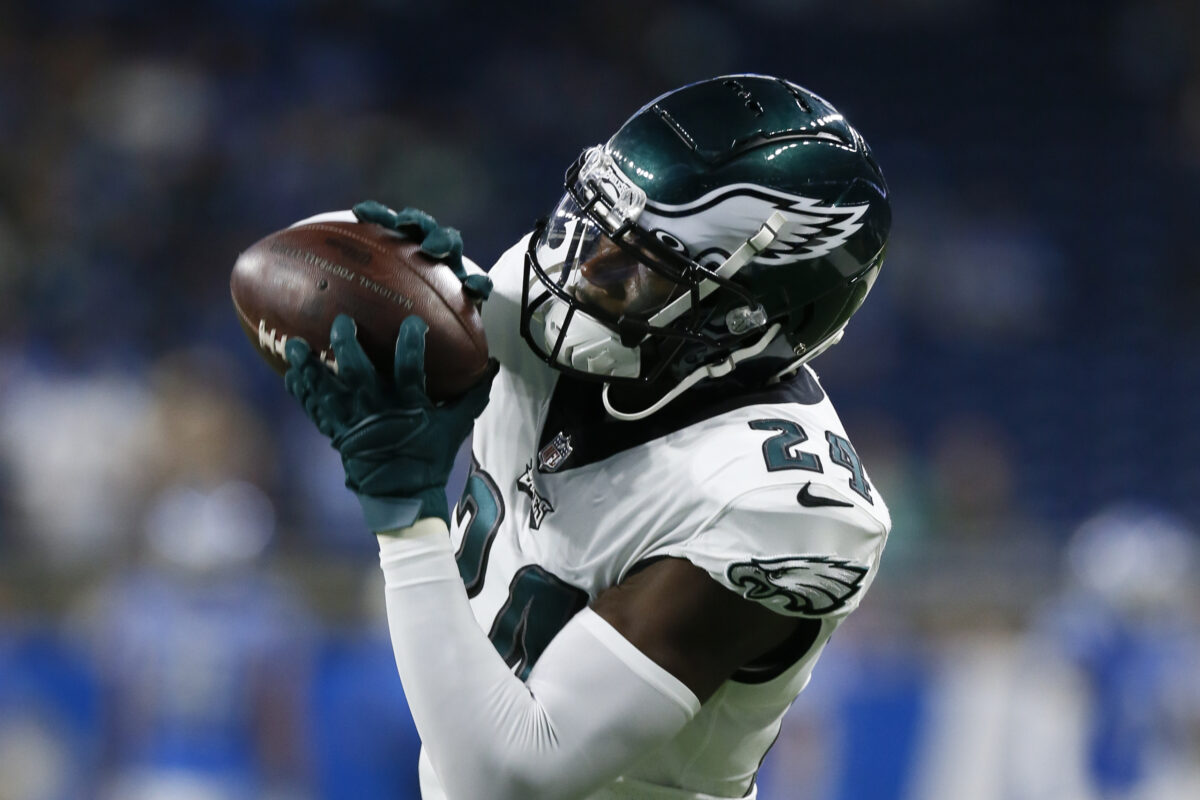 The Detroit Lions had high hopes to settle a score with the Philadelphia Eagles after being drubbed by their NFC East foes in 2021.

The best plans are going awry.

Jared Goff was picked by James Bradberry, who returned it 27 yards for a score as the Eagles bumped the lead to 14 points. 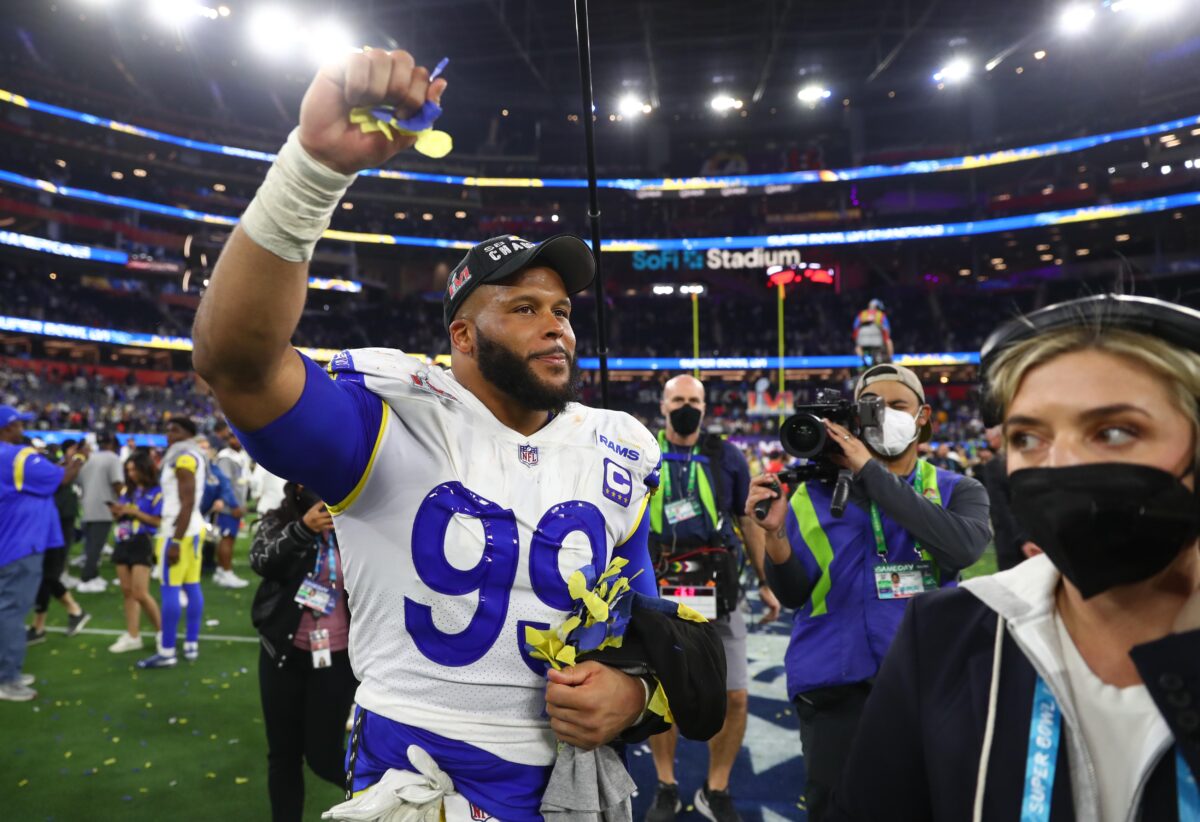 Everybody does predictions before the start of every season in every sport, and of course, we who blather on about the NFL are no exception. Last year, Doug Farrar, Laurie Fitzpatrick, and Mark Schofield filled out the Touchdown Wire predictions sheet, and while the predictions made sense, we all whiffed on a few things — most notably, the Super Bowl teams.

Now, with Mark off to pastures anew (see you ’round, old friend), we’ve enlisted Luke Easterling, the shot-caller for both Bucs Wire and Draft Wire, and an estimable football mind in his own right. Luke and Doug also host the weekly “4-Down Territory” video, which you should definitely check out.

With all that said, let’s get to the predictions. Here’s how we see the 2022 NFL season shaking out — from division winners to Super Bowl champion to a plethora of individual awards.

Touchdown Wire’s Doug Farrar asks — and tries to answer — the most pressing questions for every NFL team as the 2022 season begins. 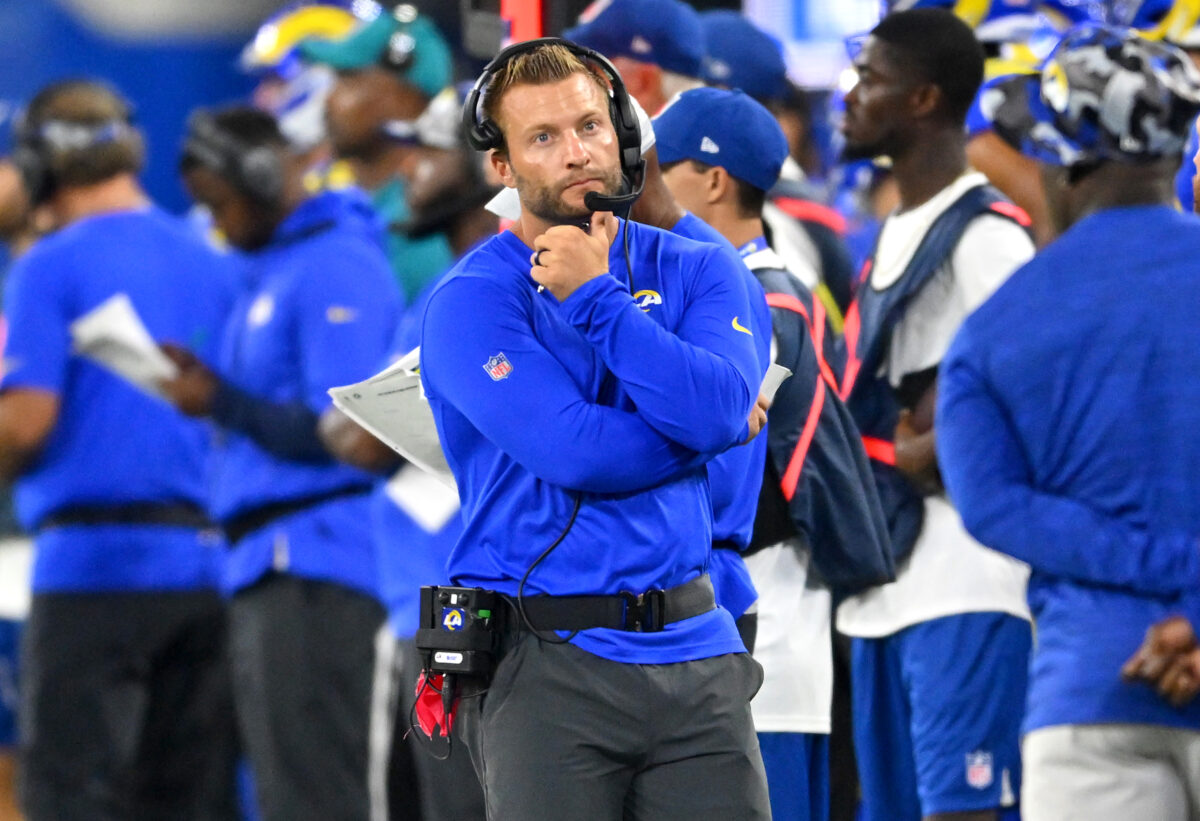 No matter how great any team is, every team has its share of questions to answer when a new season begins. The 1968 Baltimore Colts looked unbeatable until they met the New York Jets in Super Bowl III, and Jets running back Matt Snell exploited the weak right side of Baltimore’s defensive front over and over on the way to one of the greatest upsets in sports history. The 2007 New England Patriots were unbeatable until they lost to the New York Giants in Super Bowl XLII because their interior offensive line couldn’t handle the Giants’ NASCAR pressure packages.

No matter how great your team is, one little thing can turn everything upside down.

Conversely, teams that may look hopeless are actually building credibly to the future, and that will show up on the field more than anybody might think. And then there are the NFL’s stragglers — the teams for whom there is little present hope, and the primary question is, “How do we transcend our multiple weaknesses to be at least competitive?”

Each of the NFL’s 32 teams have questions to answer coming into the 2022 season, which of course is right around the corner. So here, for your consideration, are the most pressing questions every NFL team will — and must — answer in the new season.