Just one week after parting ways with the UFC, Aspen Ladd has a new home. 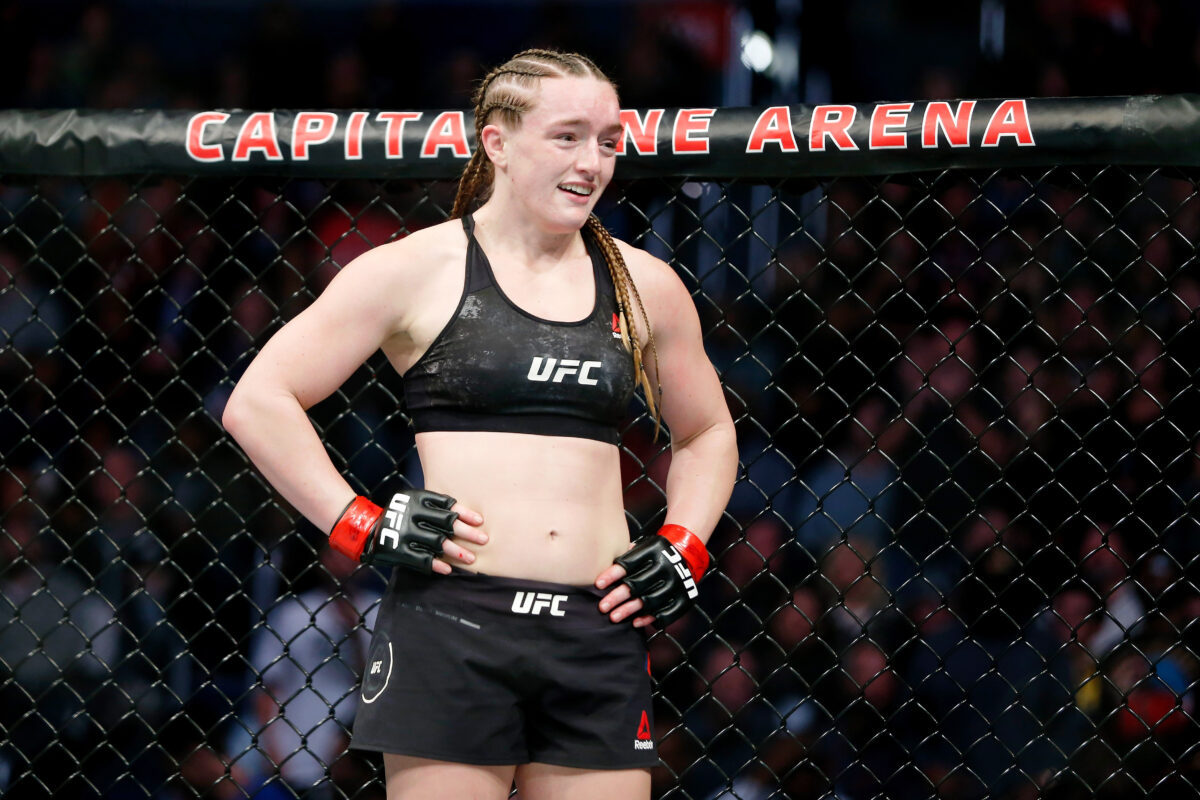 Just one week after parting ways with the UFC, Ladd (9-3) has signed with PFL to compete at women’s featherweight, promotion officials announced Tuesday.

“I want to thank the Professional Fighters League for giving me the opportunity to continue my career in the PFL SmartCage,” Ladd said in a statement. “I am excited about the PFL’s sport season format where you win and advance based on talent and merit. I look forward to testing myself against the best women in the world.”

Ladd was released by the UFC after a history of failing to make the non-title bantamweight limit of 136 pounds, which led to numerous fight cancellations. The 27-year-old was booked against Sara McMann at UFC Fight Night 210, but the bout was scrapped after Ladd came in at 138, two pounds over the bantamweight limit. Ladd’s weight cut was stopped by commission officials, and she was subsequently released by the promotion.

Ladd made her featherweight debut against Norma Dumont in the UFC Fight Night 195 main event last October, but lost the fight by unanimous decision. During her almost five-year UFC tenure, Ladd scored finishes of Lina Lansberg, Tonya Evinger and Yana Kunitskaya. She had three fights called off due to weight-related issues during that stretch.

It’s unclear in which division Ladd will compete. Originally, ESPN reported that 2023 would be the first PFL season with a women’s featherweight division, which Ladd would partake in. PFL’s subsequent press release made no mention of a women’s 145-pound division, and Ladd’s prepared statement was changed.

Through three seasons, the only PFL women’s division has been at lightweight, which has been won by Kayla Harrison twice. She’ll go for a third title against Larissa Pacheco on Nov. 25 at the 2022 PFL Championships event in New York. 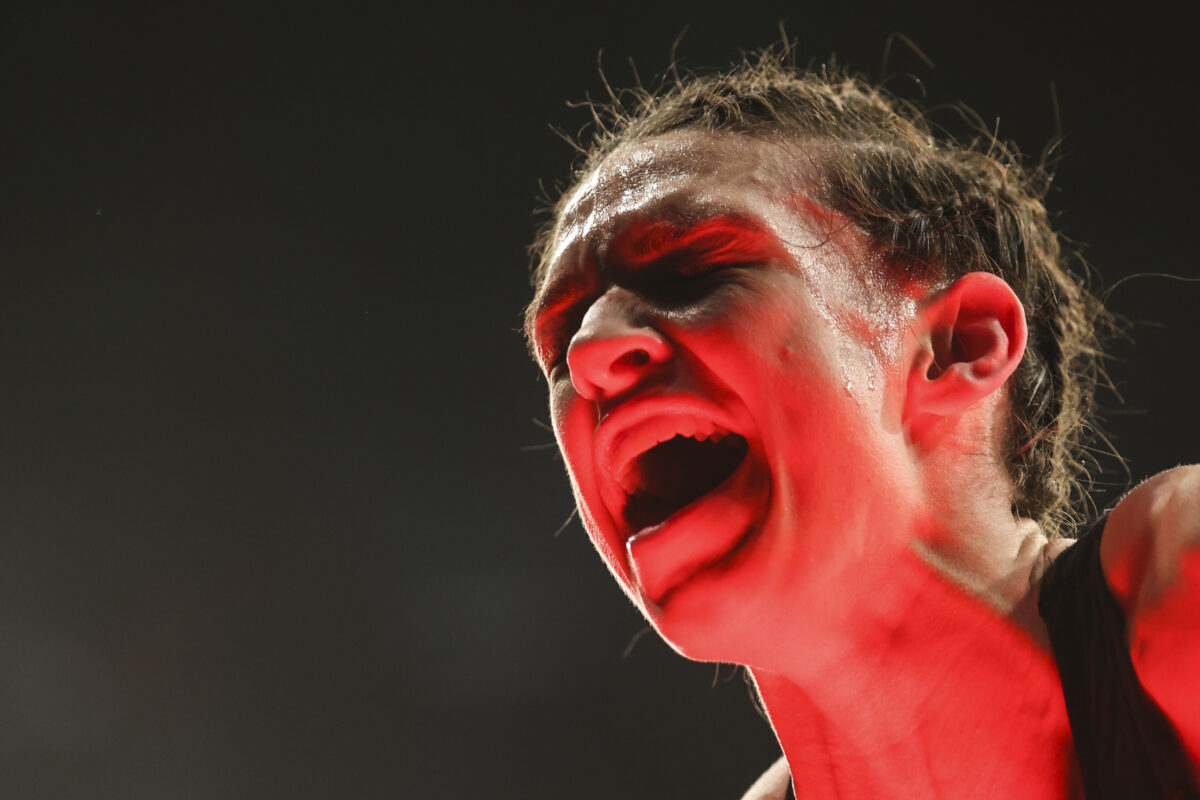 Check out this week’s “Spinning Back Clique,” MMA Junkie’s weekly show that takes a spin through the biggest topics in mixed martial arts.

“Spinning Back Clique” is released each Tuesday on MMA Junkie’s YouTube channel. You can watch the full episode in the video above. 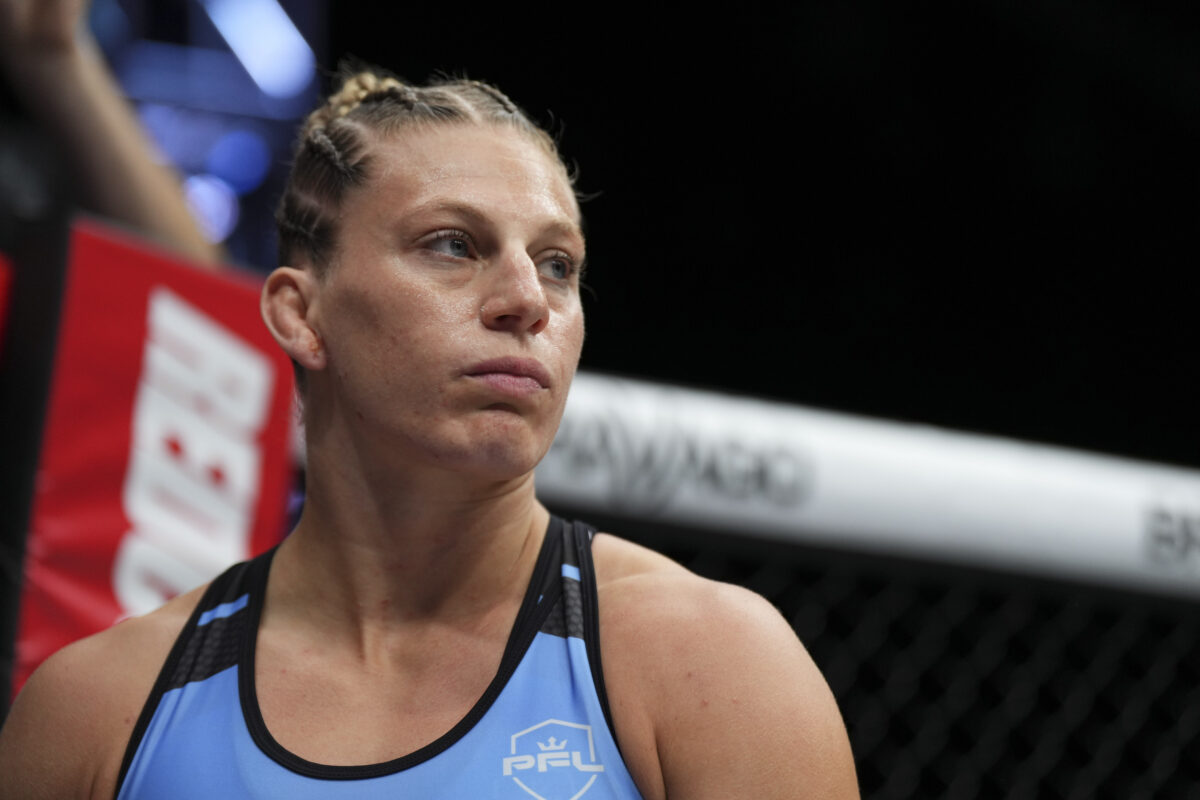 The finale of the 2022 PFL postseason is set.

While there are no surprises in terms of the six $1 million title fight matchups, which were configured during the post-season, a handful of showcase bouts were also added to the card – including one amateur bout involving the grandson of a boxing icon.

The event marks the first time the promotion has put on a pay-per-view card.

See below to check out the full 2022 PFL Championships lineup, with two bouts still to be added, according to promotion officials.

Former UFC veterans Shane Burgos and Marlon Moraes are expected to make their PFL debuts against each other. 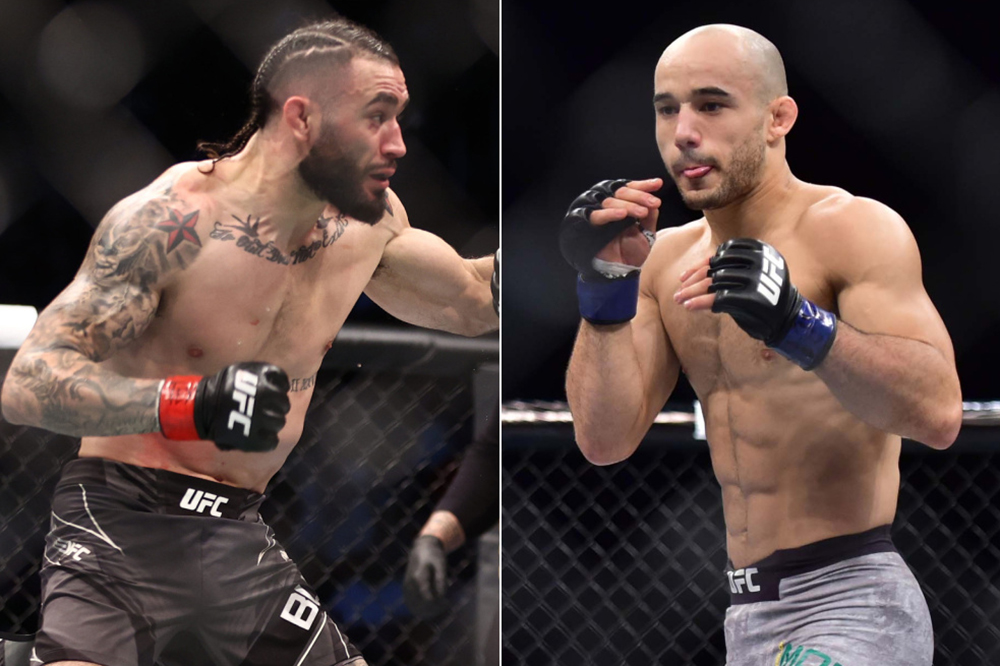 The former UFC contenders are being targeted to square off in a featherweight fight at the 2022 PFL Championships, which is expected to take place Nov. 25 at a yet-to-be-announced location. News of the booking was first reported Tuesday by ESPN, the PFL’s broadcast partner.

Moraes, who recently came out of retirement to sign with the PFL, will be moving up a weight class to compete in Burgos’ normal division.

Burgos (15-3 MMA, 0-0 PFL) finished his contract with the UFC on July 16 when he defeated Charles Jourdain by majority decision on the main card of UFC on ABC 3. The win put the 31-year-old on a two-fight wining streak after he’d lost two in a row against Josh Emmett and Edson Barboza in Fight of the Night bouts.

Meanwhile, Moraes (23-10-1 MMA, 0-0 PFL), a former World Series of Fighting champion, is looking to bounce back from a four-fight losing streak, which marked the end of his UFC career. The Brazilian last recorded a win in December 2019 when he edged out Jose Aldo in a split decision at UFC 245.

With the addition, here’s the updated 2022 PFL Championships lineup:

A result from the 2022 PFL heavyweight regular season has been overturned. 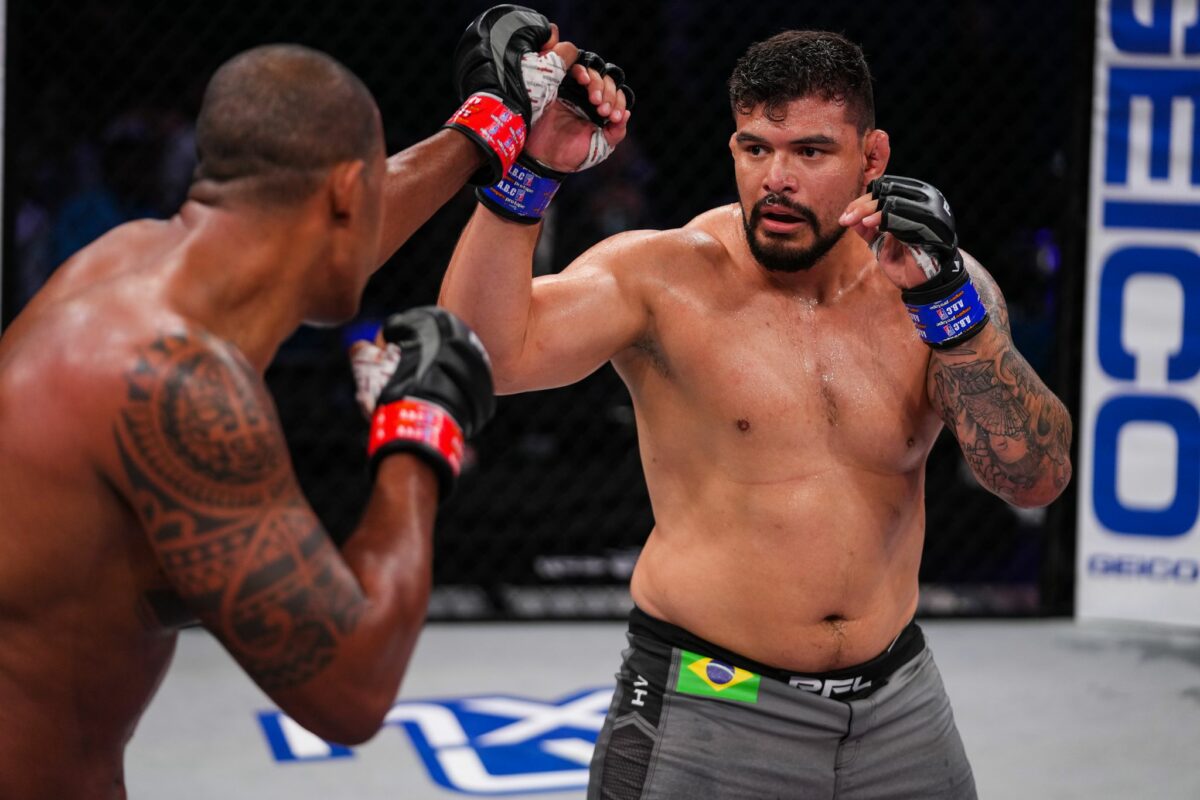 A result from the 2022 PFL heavyweight regular season has been overturned.

The Georgia Athletic and Entertainment Commission, the regulatory body which oversaw 2022 PFL 5 in Atlanta, officially concluded at a recent commission meeting the result of the June 24 bout between [autotag]Klidson Abreu[/autotag] and [autotag]Renan Ferreira[/autotag] will be deemed a no contest.

Initially scored a unanimous decision win for Abreu, the result was switched after Abreu failed a drug test. MMA Junkie confirmed the news via acquisition of a commission document.

While the document sent from commission director Matt Woodruff to Ferreira and his team acknowledges the failed test, it does not specify the substance. MMA Fighting reports the substance was a prescribed medication for a leg laceration.

Only one card remains in the 2022 PFL playoffs – its championships. Abreu didn’t make the playoffs and hasn’t competed since June 24. Meanwhile, Ferreira was eliminated in the opening round of the playoffs by Ante Delija via first-round TKO.

Do you remember the 21st night of September? These UFC, Bellator and PFL fighters do! 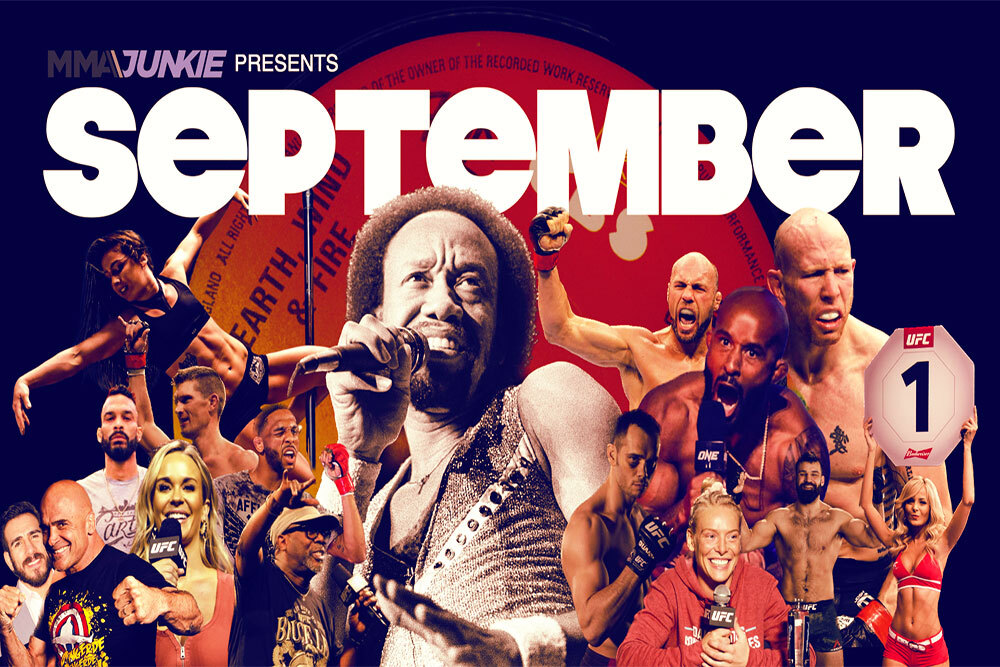 Do you remember the 21st night of September? We do!

How can you not love “September,” the 1978 feel-good classic from legendary R&B band Earth, Wind & Fire? It’s one of those songs that, once you hear the first note, is sure to get you grooving and singing along.

Which is what we asked a bunch of mixed martial artists past and present to do on this 21st of September in celebration of the unofficial Earth, Wind & Fire Day holiday.

Never a cloudy day when you can get this many MMA fighters singing “September” in one video, which you can watch below.

We hope you enjoy (and sing along)!

Never a cloudy day when this many fighters sing "September" in one video.

The Blue Corner is MMA Junkie’s blog space. We don’t take it overly serious, and neither should you. If you come complaining to us that something you read here is not hard-hitting news, expect to have the previous sentence repeated in ALL CAPS.

Claressa Shields has a new date for her boxing return. 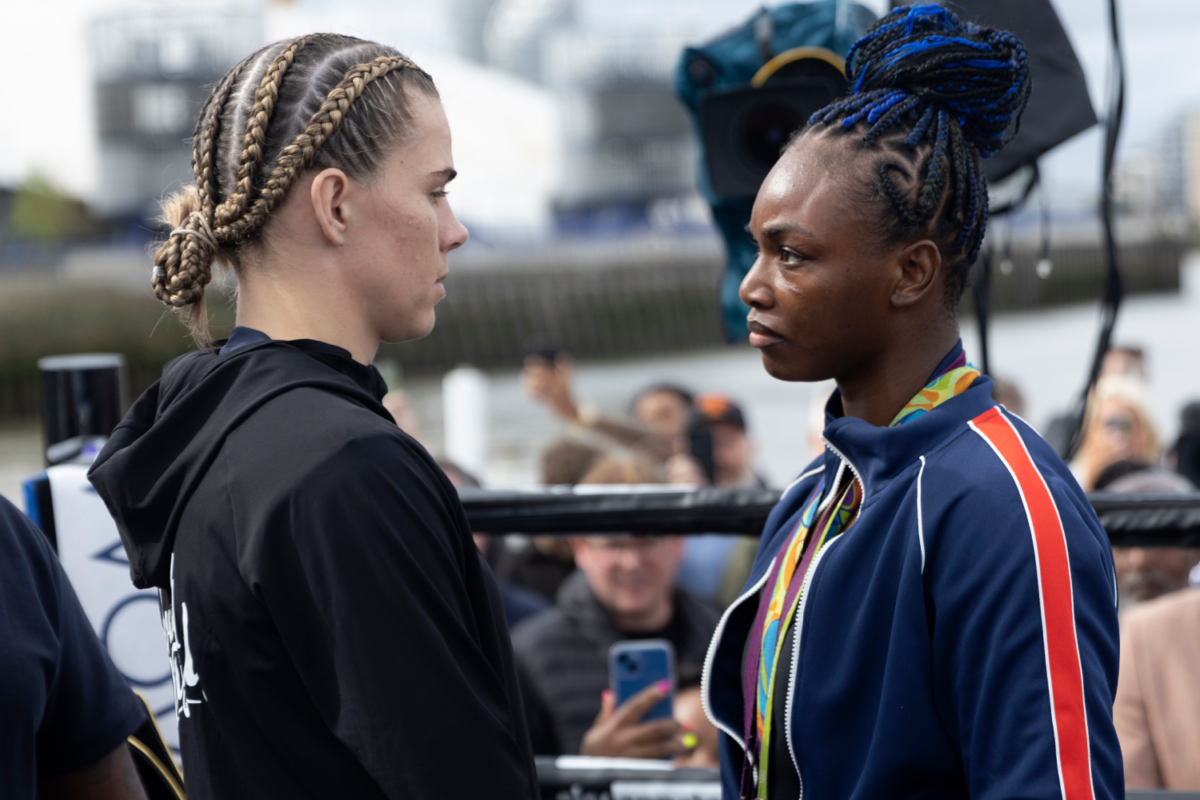 [autotag]Claressa Shields[/autotag]’ return to the boxing ring has a new date.

The multi-time boxing champion and PFL fighter is set to take on Savannah Marshall on Oct. 15 in a women’s middleweight title unification bout at The O2 in London. The news was announced by the promotion on Tuesday afternoon.

Both Shields and Marshall were originally scheduled to fight on Sept. 10, but the event was postponed after the death of Queen Elizabeth II. The decision was made by the British Boxing Board of Control out of respect for the passing of the Queen.

Shields, a two-time boxing Olympic gold medalist, also competes in MMA. She’s currently signed to the PFL and is expected to return at the 2022 PFL Championship on Nov. 25.

Shields is 1-1 in MMA. She successfully debuted with a TKO win over Brittney Elkin in June 2021, but then lost in her sophomore outing in October, coming up short in a split-decision against Mexico’s Abigail Montes. 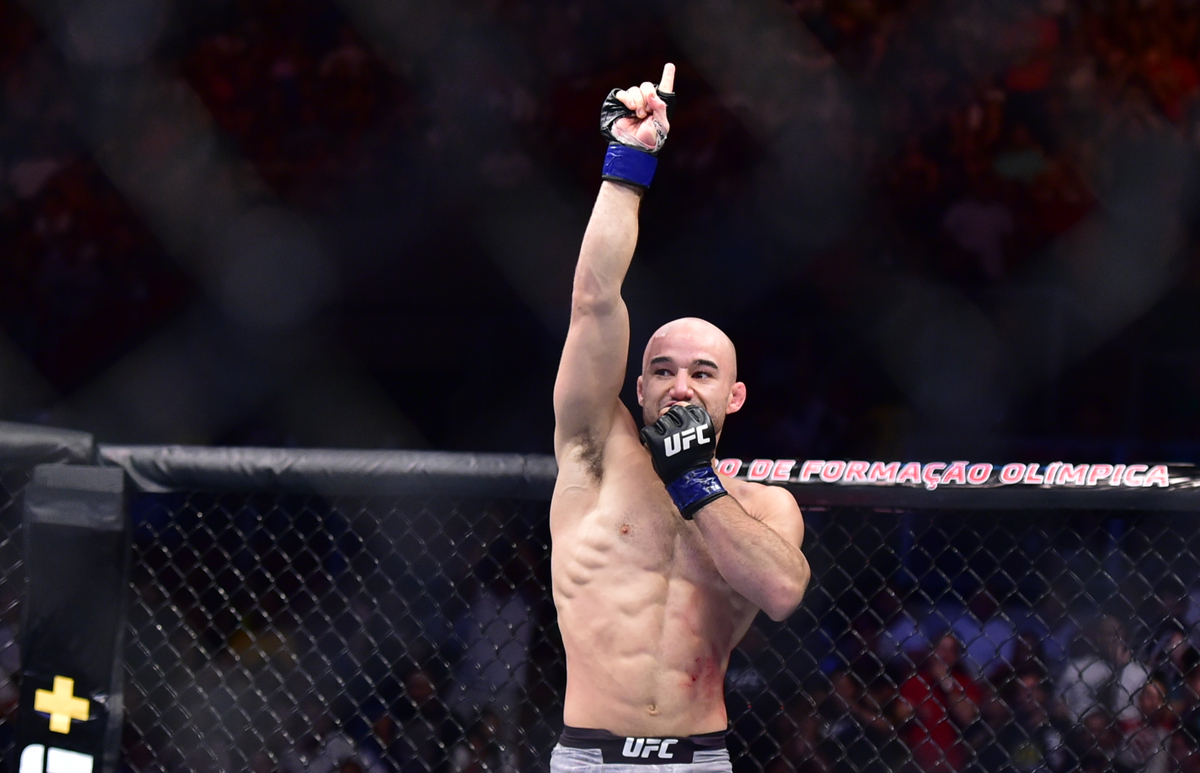 Following his last outing in March, the former UFC bantamweight title challenger and former World Series of Fighting champion announced his retirement from MMA. Six months later, “Magic” is preparing to step back into the cage under the PFL banner, and will compete in the 2023 season.

ESPN first reported the news, highlighting that the details of the deal are still being finalized.

“Guys, I wanna announce I’m coming home where I started,” Moraes wrote on Twitter. “I wanna thank the legend Ray Sefo & PFL MMA. Get ready for some firework.”

Guys I wanna announce I’m coming home where I started, I wanna thank the legend Ray Sefo & @PFLMMA get ready for some firework

The 34-year-old Moraes (23-10-1) competed in the bantamweight division during his 11-fight stretch with the UFC. Now, he will return to the promotion that has WSOF roots, to fight in the featherweight tournament with a shot at a $1 million prize.

The last win Moraes recorded in the UFC was a split decision nod against former featherweight king Jose Aldo at UFC 245 in December 2019. Moraes then went through a rough patch, losing his next four outings, all by stoppage.

Looking for a fresh restart, Moraes will enter the next PFL season along with fellow UFC veterans who recently signed with the PFL, Shane Burgos and Thiago Santos.

Now I get to fight on the same card @KaylaH 💥💥

Biaggio Ali Walsh, 24, is set to make his debut with the PFL this fall at the promotion’s championship event. 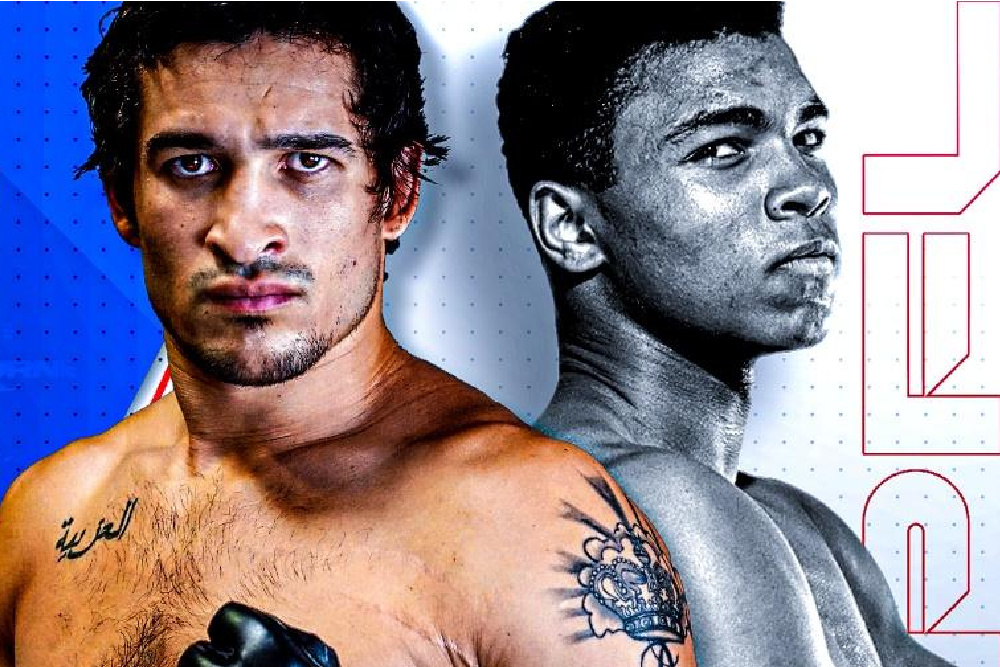 The PFL announced Wednesday that it has signed [autotag]Biaggio Ali Walsh[/autotag], grandson of iconic boxer Muhammad Ali, to an amateur contract, and he will make his promotional debut in November on the undercard of the 2022 PFL Championships event.

Ali Walsh, 24, is 1-1 as a mixed martial artist and trains out of Xtreme Couture in Las Vegas. He lost his debut by second-round submission this past June but rebounded with a first-round TKO victory on Aug. 27. His brother, Nico Ali Walsh, is an undefeated professional boxer.

According to the PFL’s press release announcing the signing of Biaggio, he is expected to turn pro for the organization sometime next year.

“I want to thank Professional Fighters League for their support and confidence in me. I can’t wait to enter the PFL SmartCage,” Ali Walsh in a statement. “I have a legacy to live up to, a legacy that my grandfather began, that my brother and I continue, I chose to continue that legacy here in the Professional Fighters League. My one and only goal is to one day become a PFL world champion.”

Combat sports wasn’t Ali Walsh’s first choice. He was a high school football star running back at Bishop Gorman High School in Las Vegas, who committed to play at the University of California. After two years at Cal, Ali Walsh transferred to UNLV.

Ali Walsh transitioned from football to MMA in 2020.

Check out our MMA rankings update after a matchup shakeup at UFC 279. 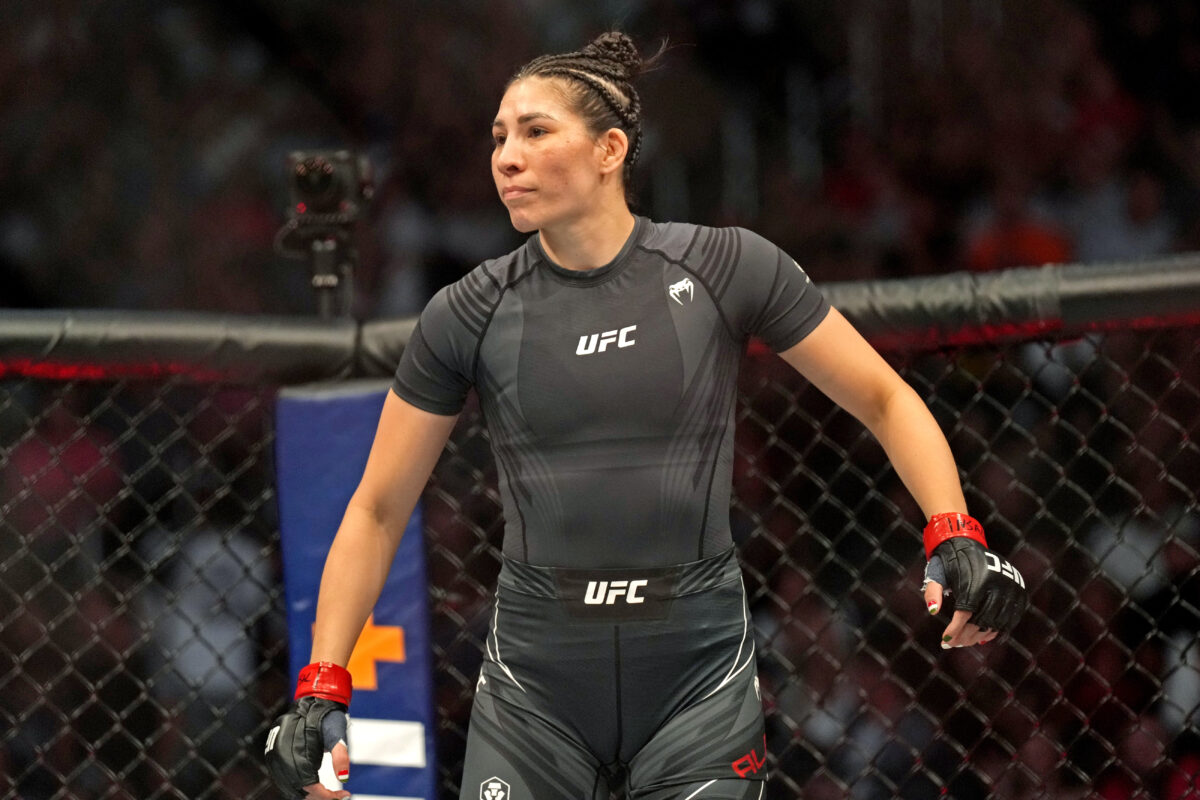 After a last-minute shuffling of bouts and issues on the scale, UFC 279 ended up with three catchweight bouts on the main card, which left some winners and losers seeing no movement this week. However, there were some that gained or lost ground in the rankings.

Although it wasn’t his original opponent, [autotag]Nate Diaz[/autotag] got his promotional send-off by defeating former interim lightweight champion Tony Ferguson in a welterweight bout. For Ferguson, it was his fifth-straight setback. Although the fight didn’t take place in the weight class in which he’s ranked, being finished by an unranked Diaz causes him to lose a couple of spots, landing at No. 12 among lightweights.

In another catchweight bout, [autotag]Irene Aldana[/autotag] faced Macy Chiasson on the main card. Chiasson had a tough first round, but just as things were turning in her favor, Aldana landed a very rare finish with an upkick to the liver, resulting in a TKO victory. Again, even though this bout technically took place outside of the division, Aldana’s performance was worthy of a bump up from No. 8 to No. 7 in this week’s update.

Check out all of the changes following UFC 279.