Levis likes to take his coffee with mayonnaise and a side of intestinal distress. Fine. Whatever. I’ll drink it, but I’m adding booze. 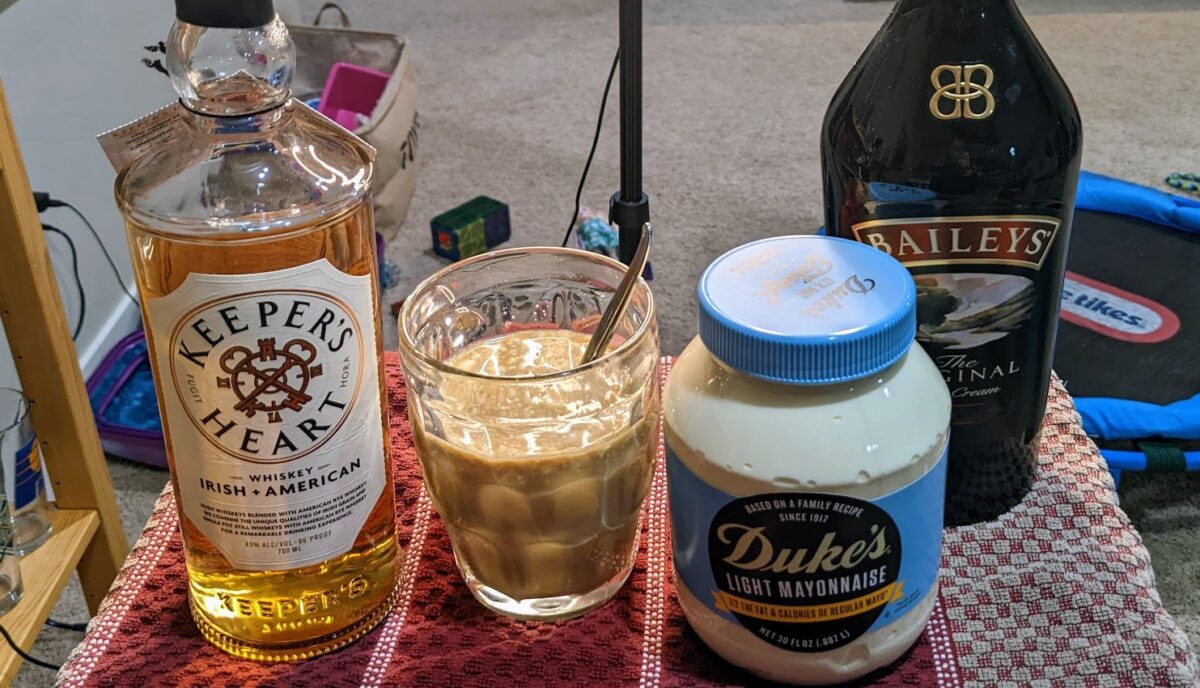 I don’t know very much about Kentucky quarterback Will Levis. On the field, sure, I fully accept he is a first round talent in a passer-needy NFL. He escaped Sean Clifford’s shadow at Penn State to become the engine behind the Wildcats’ offense and, despite a relative downturn in UK’s fortunes, has been statistically more proficient in 2022 than he was in his breakout 2021.

Off the field, I am assured he is a maniac. Because, trolling or not, Will Levis drinks coffee like a genuine weirdo. Sugar and cream? Nah. Entirely too much mayonnaise, squirted from a squeeze bottle until it leaves frothy ropes of egg residue floating on top of nightmare sauce? Oh, hell yeah.

This may have been expert trolling, but goof or not he’s done it *multiple* times over the course of *multiple* years.

Have you ever had Mayonnaise with your morning coffee?@UKFootball QB @will_levis is known to dabble w/ said combo 😳 pic.twitter.com/ZuR92Toa4m

This brings me to the final week of college football’s regular season: rivalry week. What was supposed to be a Tennessee-Vanderbilt tribute has been scrapped in superstitious concern about ruining whatever voodoo Clark Lea has going on the city’s western border. Instead, I will make a sacrifice to the football gods and honor another southern football rivalry with SEC ties: Kentucky-Louisville.

The Governor’s Cup is a cool in-state rivalry that’s been absolute garbage to watch recently. The smallest margin of victory since 2016 in these games was a 27-point Louisville win in 2017. In the last three matchups Kentucky is 3-0 with a 153-44 aggregate score. That’s gross. Is it mayonnaise and whiskey in coffee gross? 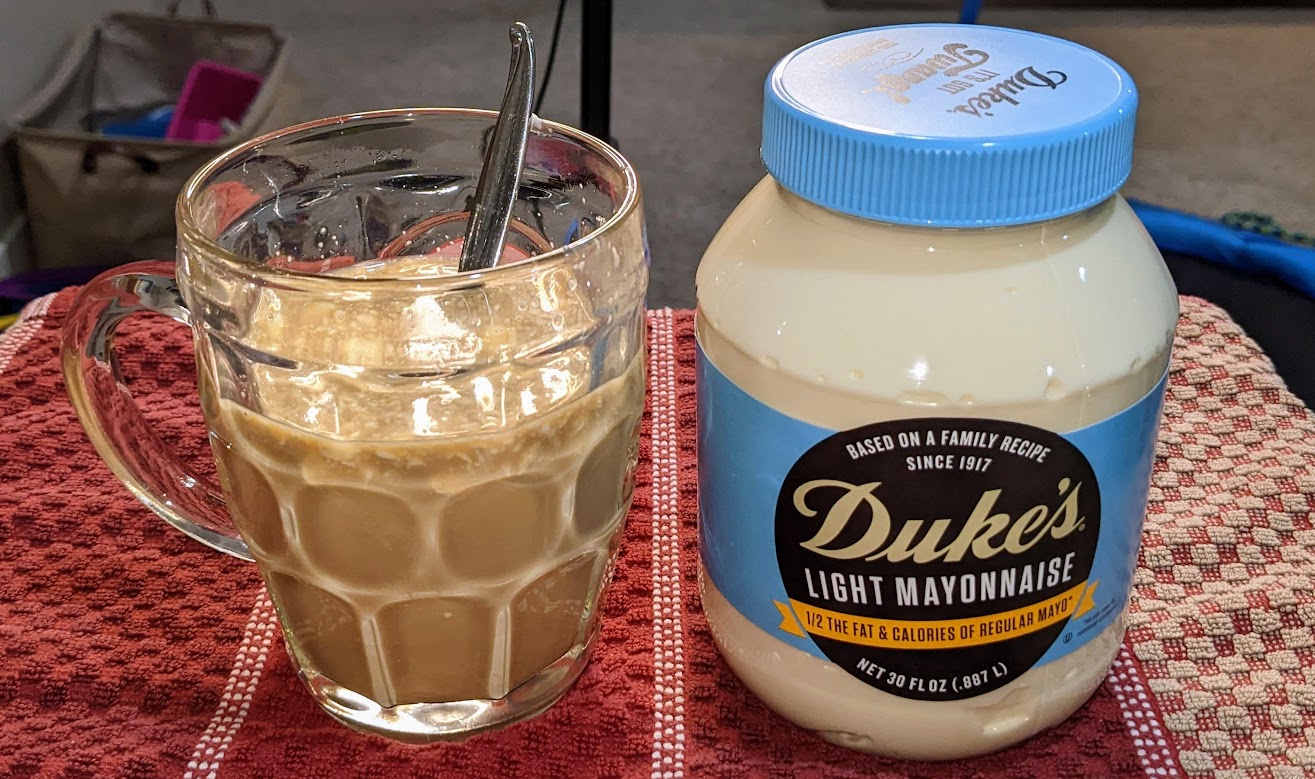 The Will Levis Irish Coffee

Oh no. The mayonnaise, it doesn’t melt. It doesn’t blend into the coffee. It isn’t a pat of butter, glazing the top of your coffee and making every sip an oily mess.

No, friends. It merely breaks into chunks, leaving your mouth to coordinate its way through an arctic sea of tiny, eggy, mushy icebergs. It is unsettling. And, worst of all, it is a beverage that tastes like mayonnaise.

That’s it. It overwhelms everything. Remember those Orbitz drinks from the mid-90s that had the little gelatin balls in them? Picture that, only warm, and every gelatin ball is in fact a tiny land mine attempting to blast your taste buds into thinking you’re eating a ham sandwich.

I mean, look at this cacophony of taste and texture. 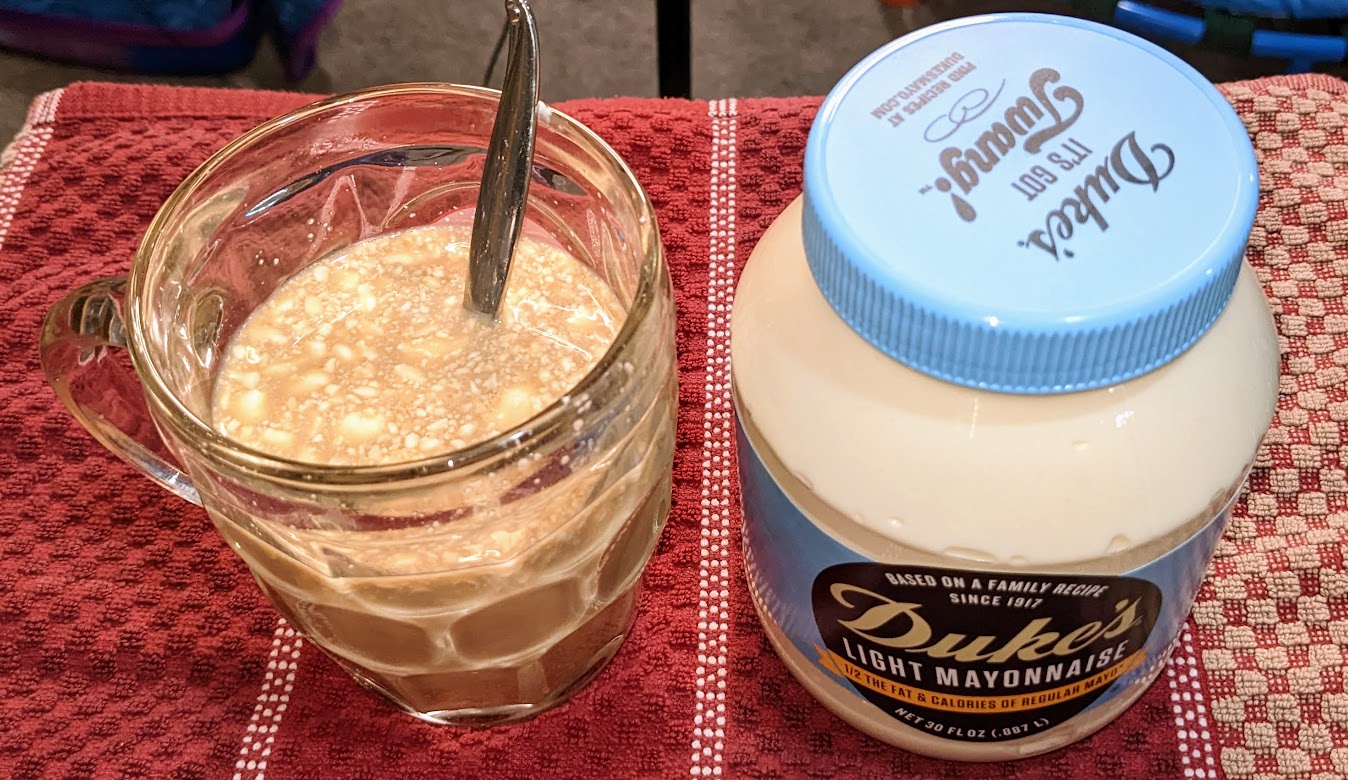 It’s impossible to get past the floating bits of mayonnaise. Underneath there’s a nice, tried-and-true cocktail. But on top is sandwich spread. There’s no way Will Levis actually likes this.

But hey, he tricked me into drinking it, so more power to him. In retaliation, I will be sending him to the New York Jets in my next 2023 mock draft. 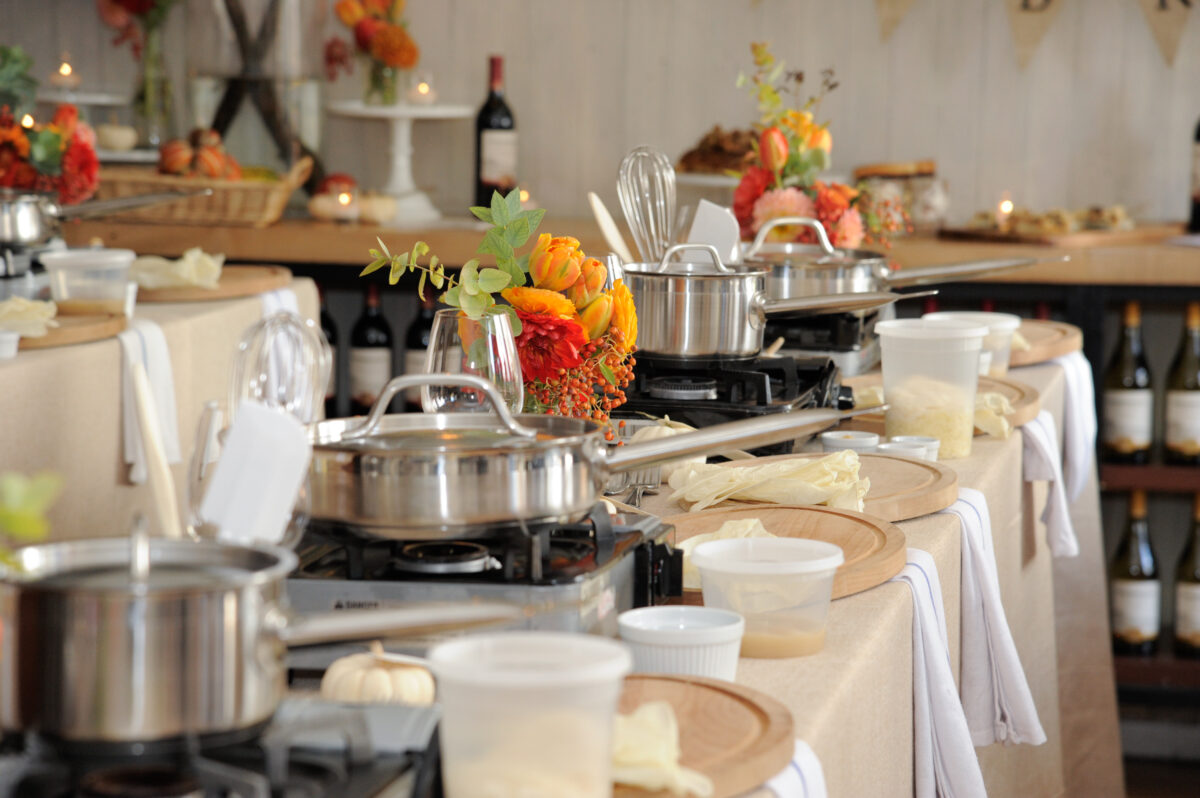 Oklahoma’s unofficial state drink is a perfect vessel for bourbon and thus, a perfect drink for Oklahoma-Oklahoma State. 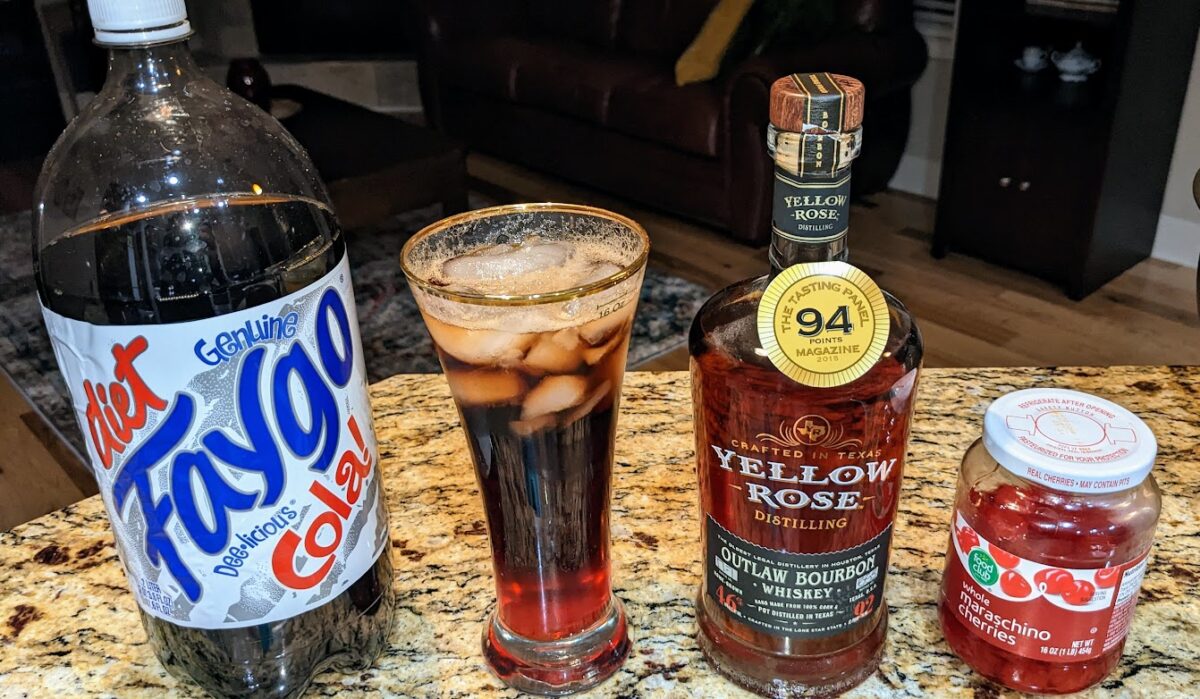 The unofficial state drink of Oklahoma is the Roy Rogers, which is slightly less boring. The plains equivalent of a Shirley Temple is cola and grenadine and … well that’s about it. It’s cherry Coke, named after a famous cowboy/entertainer whose identity, for east coast millennials, is more closely linked to rest stop fast food than the man himself.

Rogers was actually born in Ohio and lived in California, but he made a movie called Home in Oklahoma and … you know what? Too much backstory. Just know Coke and cherries are Oklahoma’s jam and so is college football.

That led to a very easy choice for Week 12’s College Football Cocktail, even if this year’s edition of Bedlam doesn’t look nearly as appealing as it did in August. Oklahoma has fallen on hard times following Lincoln Riley’s departure (and the departure of multiple players alongside him). Oklahoma State was 5-0 and a top 10 team for a minute but has gone 2-3 since (though reentered the rankings this week by virtue of a seven-point win over 4-6 Iowa State).

Regardless, in-state rivalries produce bonkers games and Oklahoma-Oklahoma State is no exception. The Cowboys have only won 18 times in 108 tries, but look at some of the scores this game has produced the last decade:

That rules! And while this will only be the second time in eight seasons where one of these teams is unranked, the Sooners, once a top 10 team in their own right, still have the extra gear to turn this into a true shootout.

Anyway, in honor of that we’re boozing up your Roy Rogers. It’s not very original or complex, but it’s good. And since I drank a damn dog bowl of garbage for UMass-New Mexico State, I’m happy with simple and good right now. 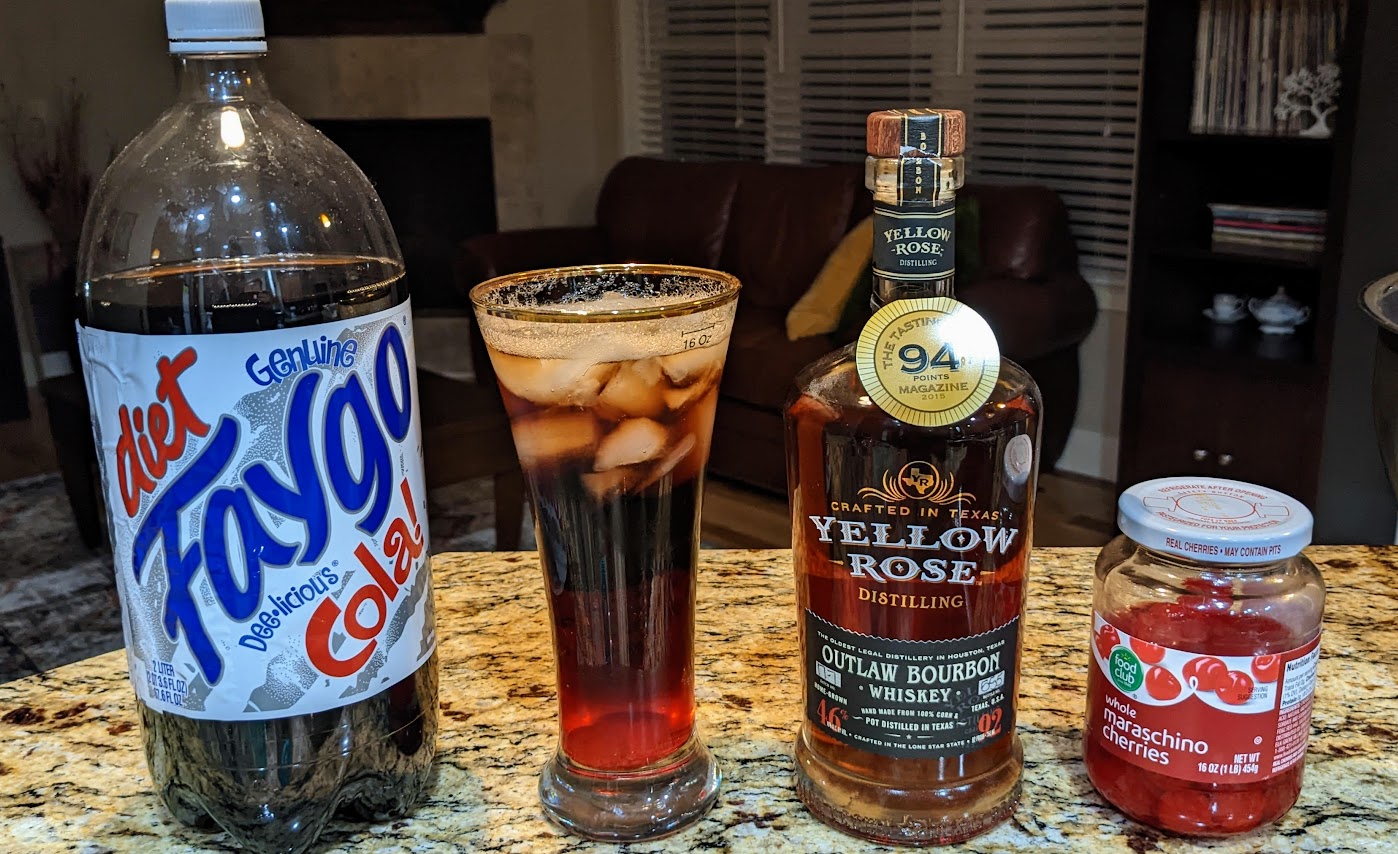 In honor of another Oklahoma rivalry, I’m using Yellow Rose bourbon — a Texas-based distillery — as a nod to the Red River Shootout (and because it was $9.99 a bottle at my local Woodman’s. That bargain cart, man. Wisconsinites know).

It tastes … pretty great actually. As a firm believer of the Badger State’s old fashioneds (brandy or bourbon or rye, all good), I can appreciate a good cherry-adled cocktail. This is the confluence of three sweet things — the Yellow Rose is light and mixes nicely — that work well together. Whiskey and Coke? Great. Cherry Coke? Wonderful. So yeah, this is basically a sweet drink turducken.

I used Faygo diet cola, which is fine because I’m cheap but obviously not as good as Coca-Cola. There’s probably room for this to get better, but since we’re mixing ingredients with bright red sugar water there isn’t really an emphasis in quality. Which, given the state of 2022 Bedlam, seems fair.

It’s very easy to drink, even if the sweetness is probably too much for say, three or four at a time. Of course, you could even that out by upping the bourbon content or maybe using a drier spirit like, say, rye. But I’m not here to tell you how to drink. I’m just here to … OK wait hold on what am I here for again?

*Unless the Indy 500 or Big Ten Basketball Tournament happen to be taking place.

Thanksgiving is for turkeys and plenty of stuffing 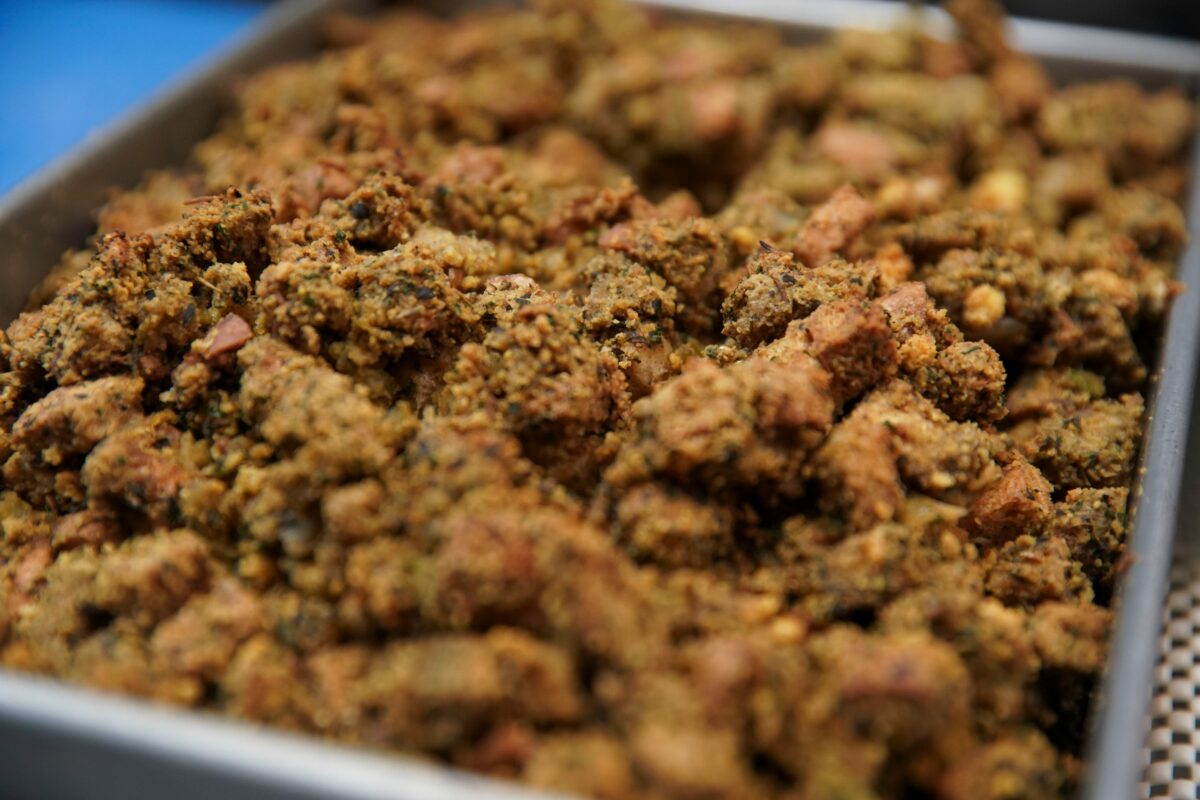 Does your state love fast food? Find out if your state does (or doesn’t) right here: 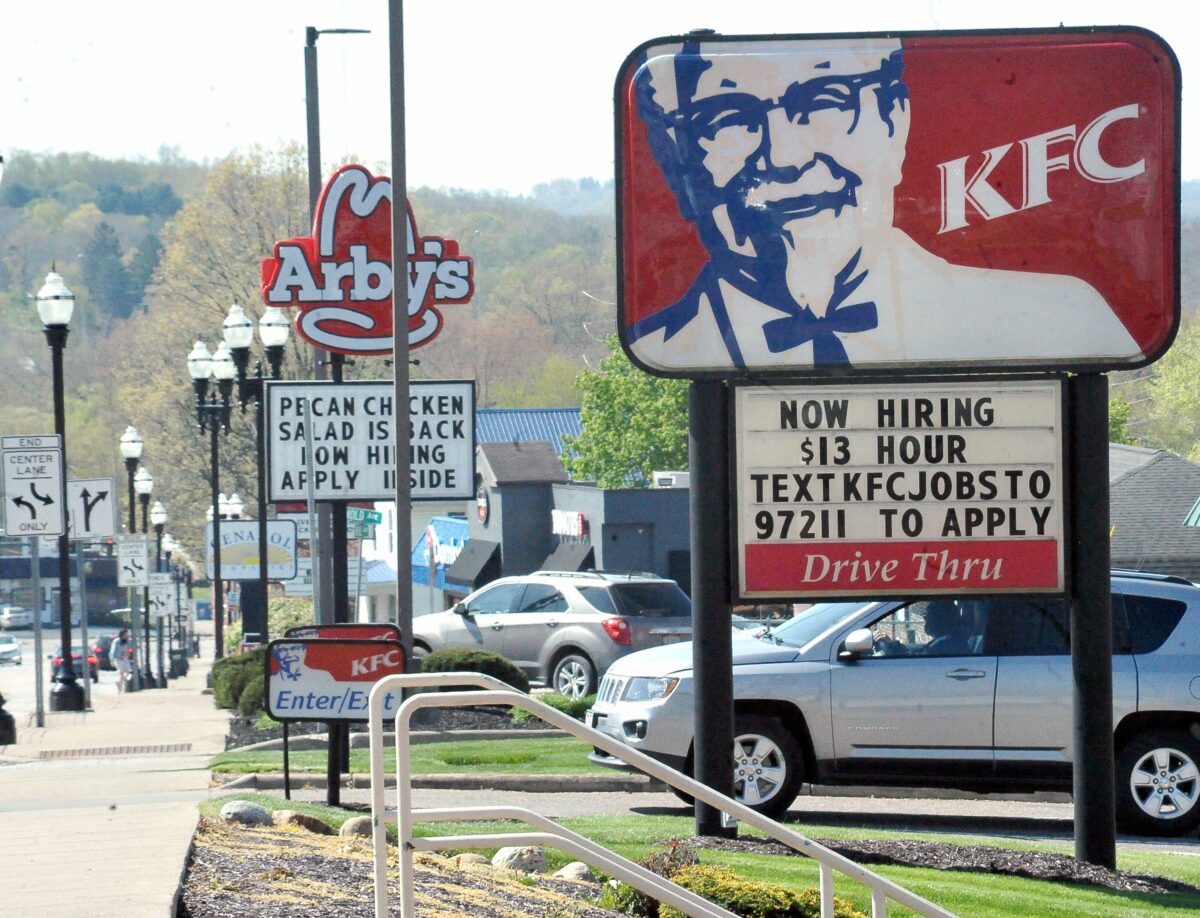 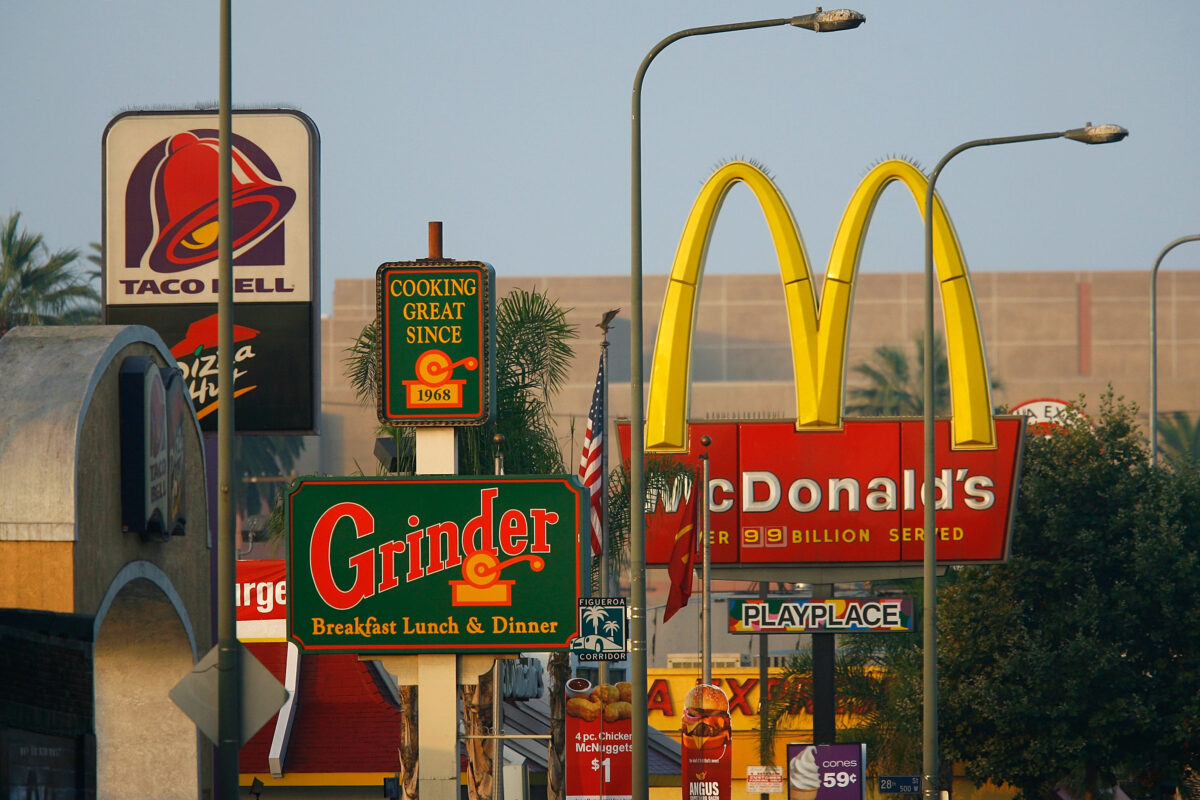 More more the merrier? Try the 15 best low-alcohol beers on the market: 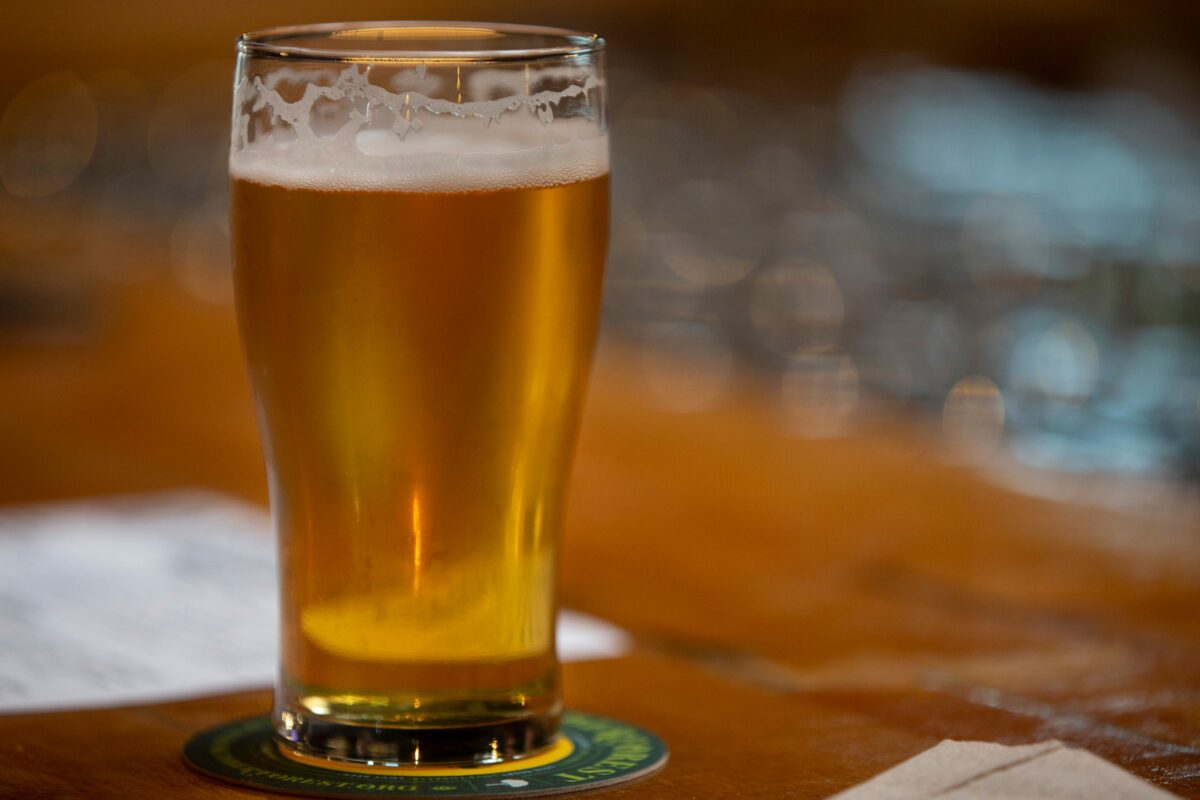 Dr Pepper made a special bourbon flavored Fansville Reserve. Turns out, it mixes well with … bourbon. 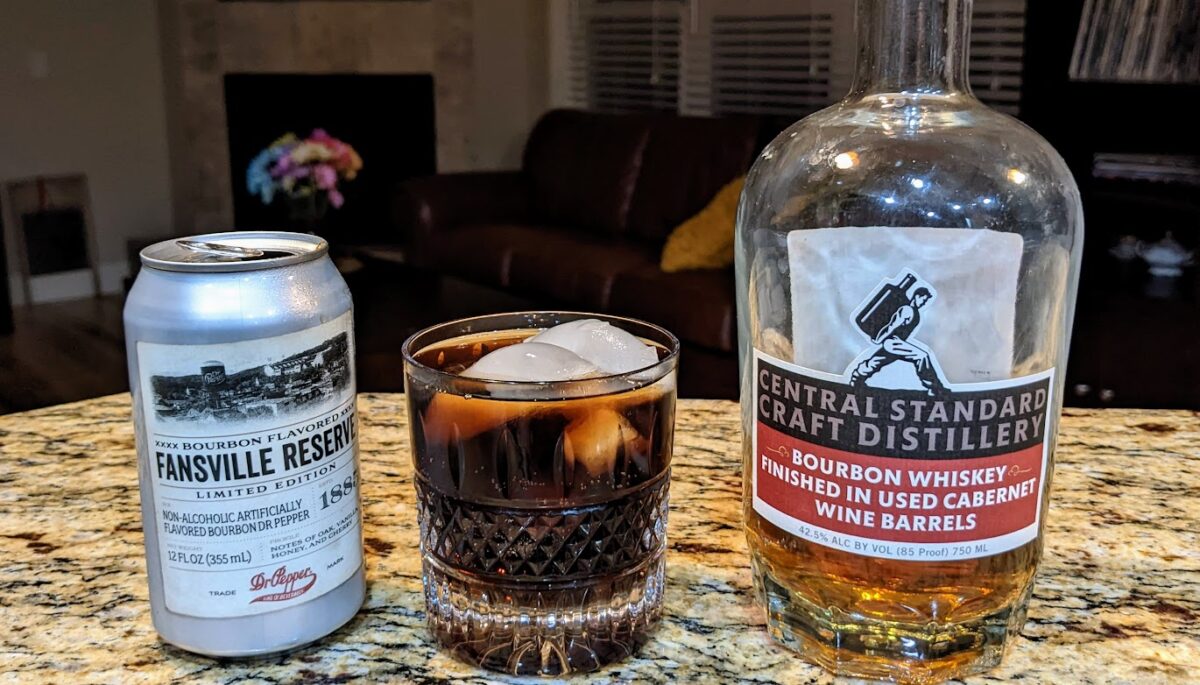 Dr Pepper — its official name has no period, which I assume frees it from having to produce a medical degree upon request — knows it’s not merely a soft drink. It’s a stately mixer.

The fruit-ish, cola-adjacent, difficult-to-describe soda is underappreciated for its ability to make a palatable cocktail with even the harshest of booze (Kamchatka, Fleischmann’s, any of the rubbing alcohol vodkas, really). Dr Pepper and whiskey is an easy, reliable mixed drink. And since bourbon country overlaps nicely with the college football fans Dr Pepper has eagerly courted every fall with a barrage of extended-universe advertisements, the soft drink goliath reached out to meet those fans halfway. 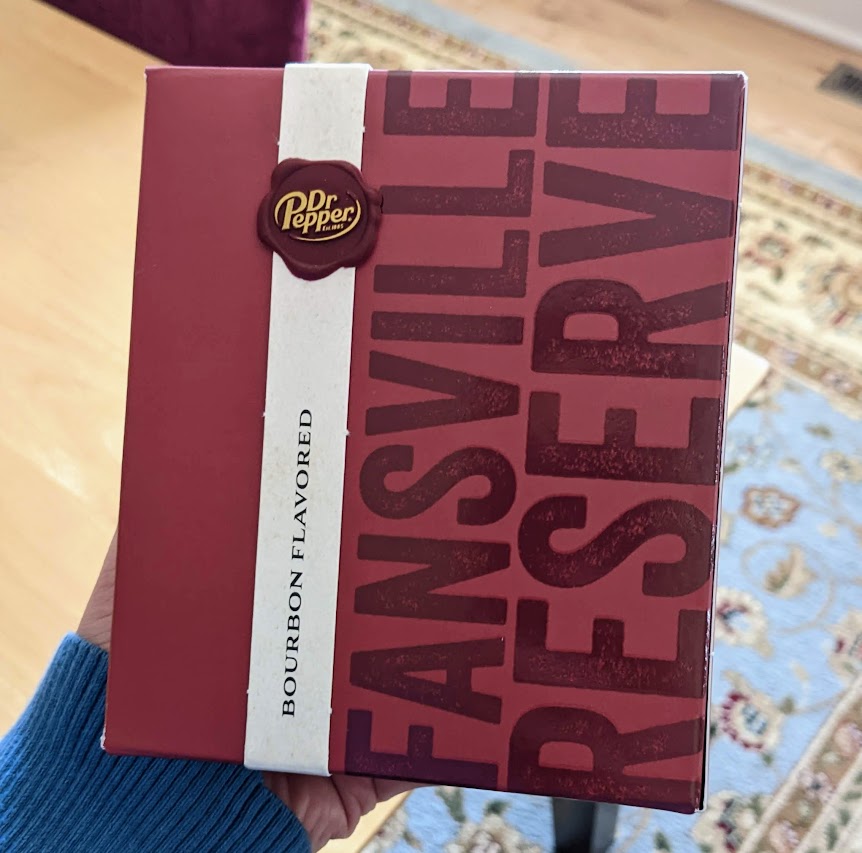 The limited edition brew can only be won via random drawings through Dr Pepper’s Perks website. You sign up and, through next week, get one online scratch-off card per day to try your luck at one of 2,300 cans. I used my media credentials and politeness to ask nicely for a sample to review, but in the spirit of full disclosure I also won one this morning after weeks of trying. Hooray!

I sampled the full sugar beverage — I generally lean toward diet sodas so as to make my caloric intake from beer less devastating — and wrote that up as our Beverage of the Week. But since I’m fighting off a cold and didn’t have the resources to put together a proper College Football Cocktail — Will Levis’ Irish mayonnaise coffee will have to wait until Week 13 — I went real basic with it.

I added bourbon to the bourbon Dr Pepper. 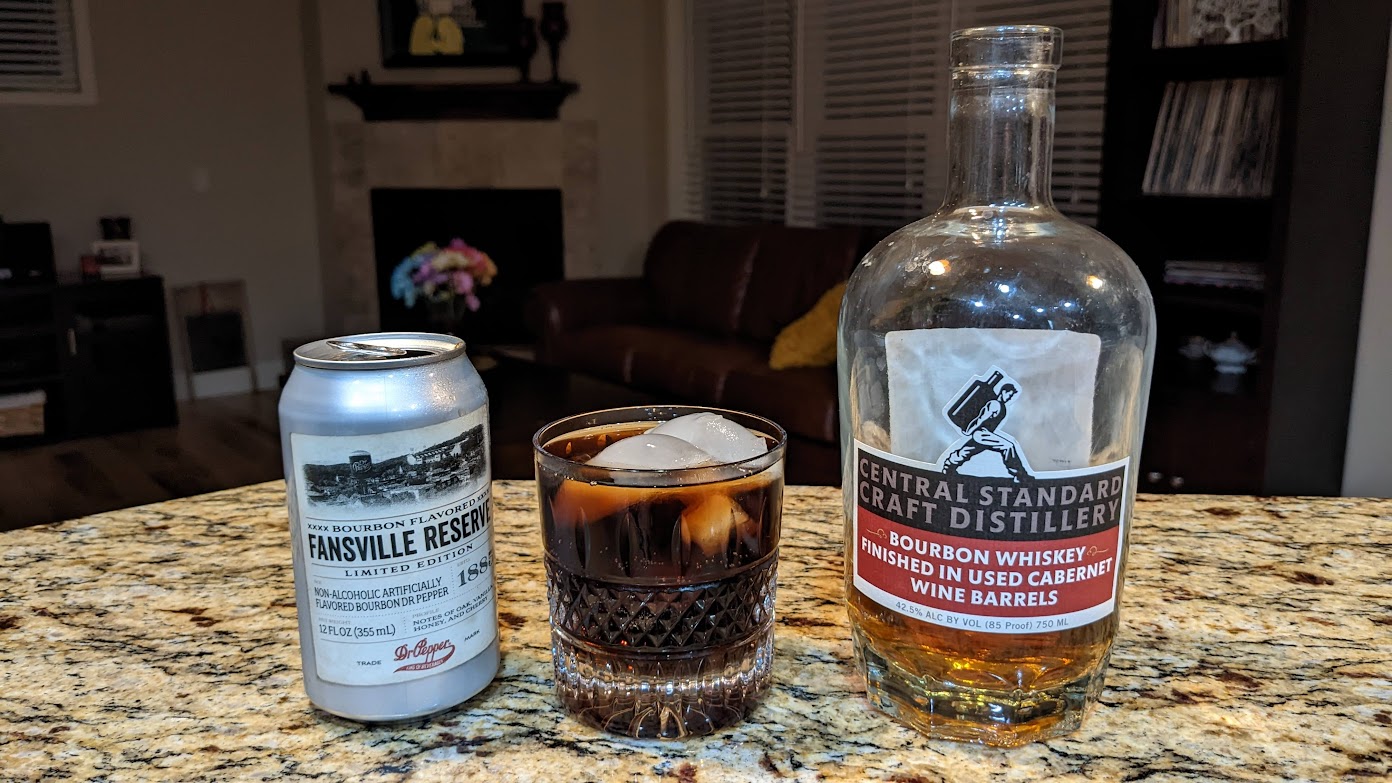 For my booze I opted for Wisconsin’s Central Standard Craft Distillery’s cabernet-barreled bourbon. Bit of a weird choice, I know, but I didn’t want to mix Old Forester and I’ve been leaning pretty hard on Brother’s Bond lately. Plus, wine and Dr Pepper seem like a fit, right? My wine expertise ends at hastily-finished bottles of banana red MD 20/20 so it’s possible I don’t know what I’m talking about.

Turns out I might! The bourbon — poured probably too stiffly — blends nicely with the Dr Pepper to create a pleasant overall experience that ups the malt and fruit and hell maybe a little bit of chocolate? into a solid two-step cocktail.

It’s easy and, importantly, tasty. Dr Pepper knew what it was doing when it made a bourbon-flavored reserve. Adding booze to it doesn’t really change much, but it will help you accept the outcome of Texas A&M’s season more easily.

Dr Pepper and bourbon was already a strong combination. But what happens when the Dr Pepper *already* tastes like whiskey? 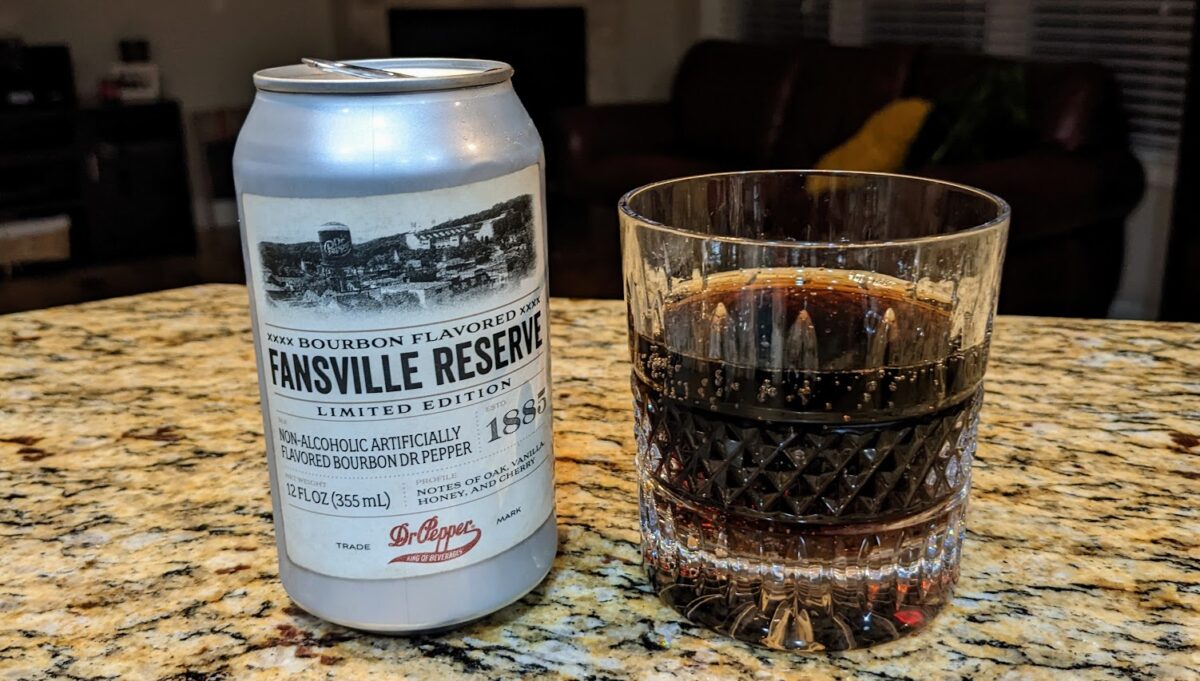 Welcome back to FTW’s Beverage of the Week series. Here, we mostly chronicle and review beers, but happily expand that scope to any beverage that pairs well with sports. Yes, even cookie dough whiskey.

It’s wild to think that Dr Pepper has its own cinematic universe. Every fall, their Fansville commercials re-introduce college football fans to a cast of recurring characters on par with Progressive’s salespeople or Geico’s cavemen or, uh, well probably a bunch of other non-insurance adsfolk I’m not remembering.

The Fansville ads are mostly innocuous, occasionally funny and, importantly, a necessary buffer between political ads in election years. They’re ingrained into Dr. Pepper’s identity, so much so that the denizens of this imaginary community have been gifted their own special Doc P variant; Dr Pepper Bourbon Flavored Fansville Reserve.

This new blend isn’t for sale and available only through the Dr Pepper Rewards exchange — an online portal that effectively tracks your purchasing habits but offers free soda and various discounts in return. You don’t have to buy anything to get your can, but you do have to win one of 2,300 specially minted kits through a lottery system that gives you one free shot at Fansville Reserve per day.

Because I am special (read: because I emailed Dr Pepper politely and asked if I could feature their new drink) I was able to get a can despite my constant failings in the sweepstakes. They, fortunately, said yes. So how did it taste?

What kind of beer should you be drinking, according to your Zodiac sign? 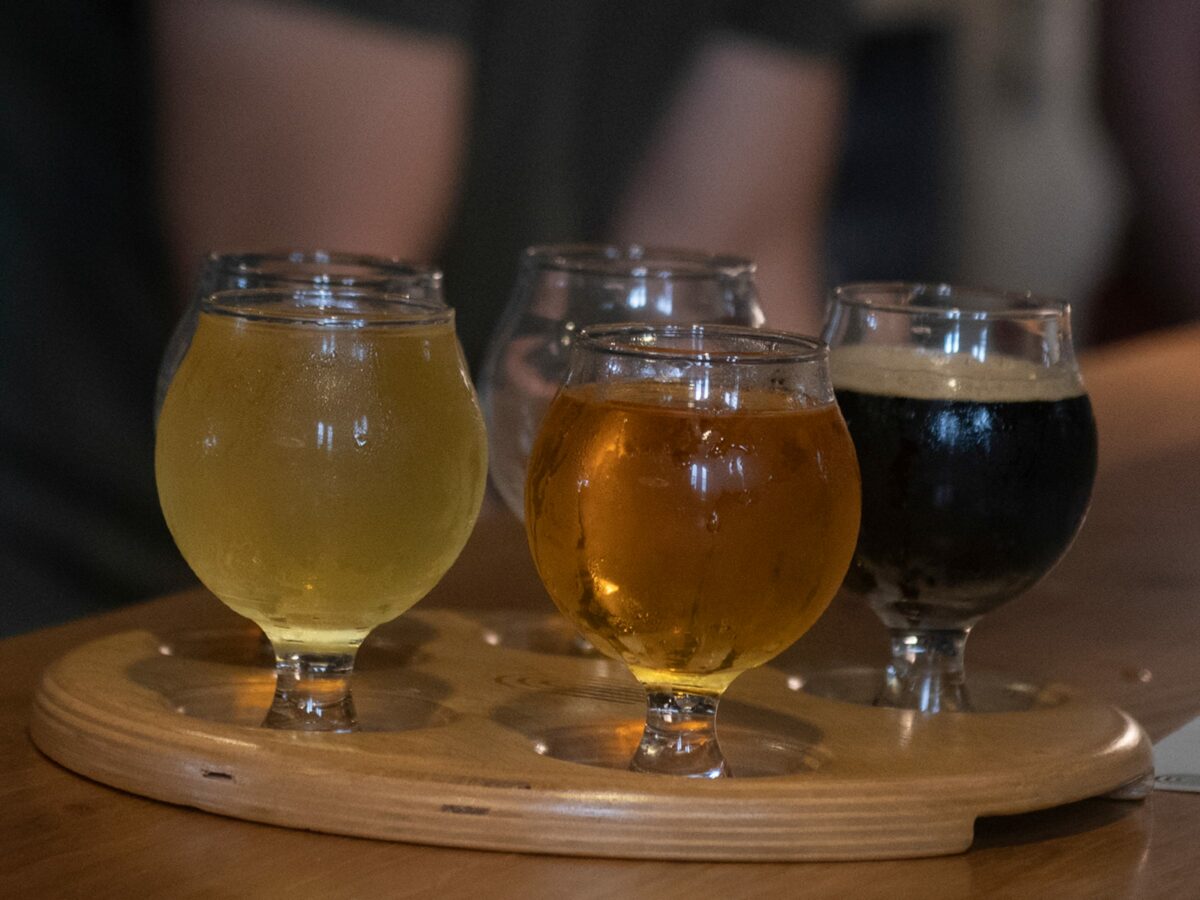