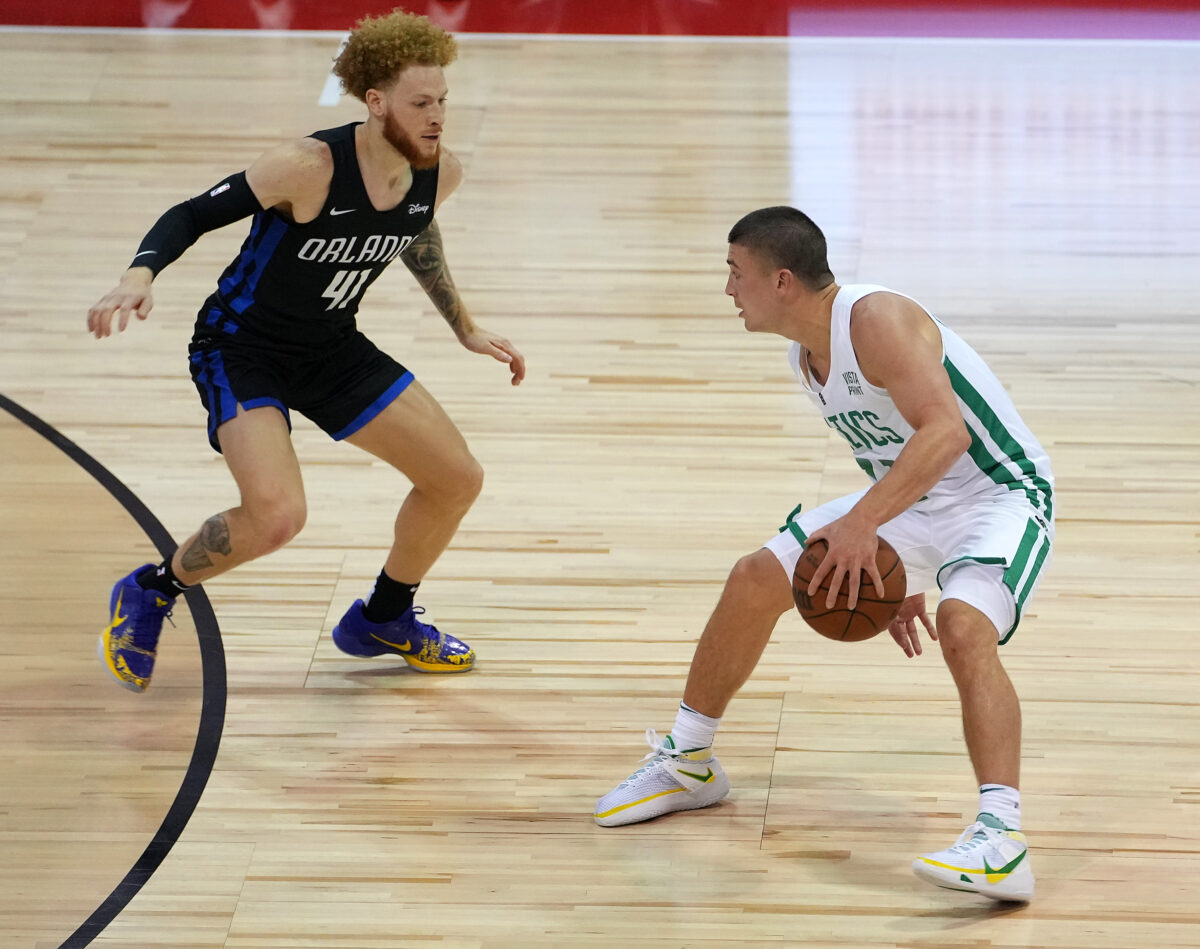 He was a clear standout on a Boston team that made it all the way to the NBA Summer League championship game, and the eye test and numbers came together to prove one simple fact: he was too good to be in Las Vegas.

FiveThirtyEight’s Jared Dubin recently looked at what being “too good” for NBA Summer League would mean for players like Pritchard going forward. Using a metric called Game Score to determine their production in Las Vegas, Dubin found that Pritchard had the third-highest average Game Score of anybody in NBA Summer League.

We saw a combination of range, handles, and on-ball creation that should translate to NBA success in year two. We probably won’t be seeing Pritchard in NBA Summer League again, and that’s a good thing.

The Vanderbilt product was the Celtics’ most reliable player in Las Vegas Summer League. 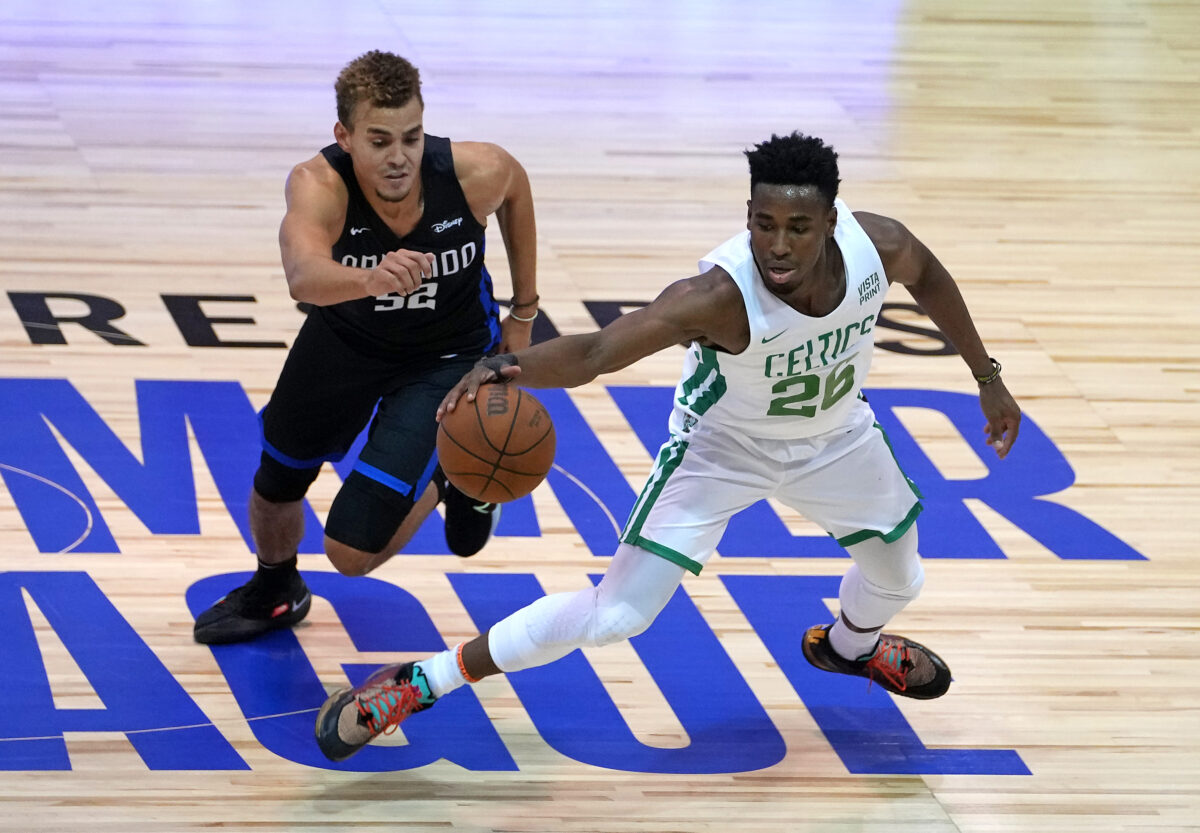 The Boston Celtics need one of their recently drafted players to develop into a solid, reliable role player if they are to chase banners in all seriousness again. And with the growth we are seeing from second-year small forward Aaron Nesmith in Las Vegas Summer League, they may be on their way to seeing the South Carolina native fit that bill.

The summer Celtics’ leading scorer and most consistent player of Las Vegas Summer League, Nesmith managed to add some new wrinkles to his game while competing for hardware in the Sin City exhibition series, reflecting the level of potential Boston took him No. 14 overall in the 2020 NBA draft.

This growth caught the attention of the hosts of the CLNS Media podcasts “The A-List,” with A. Sherrod Blakely and Kwani A. Lunis discussing the Vanderbilt product’s steps forward as a player in their most recent podcast.

Watch the video embedded above to hear their takes on one of the Celtics’ more promising young players.

Pritchard was not the same when he returned – did he simply have an Off Night? 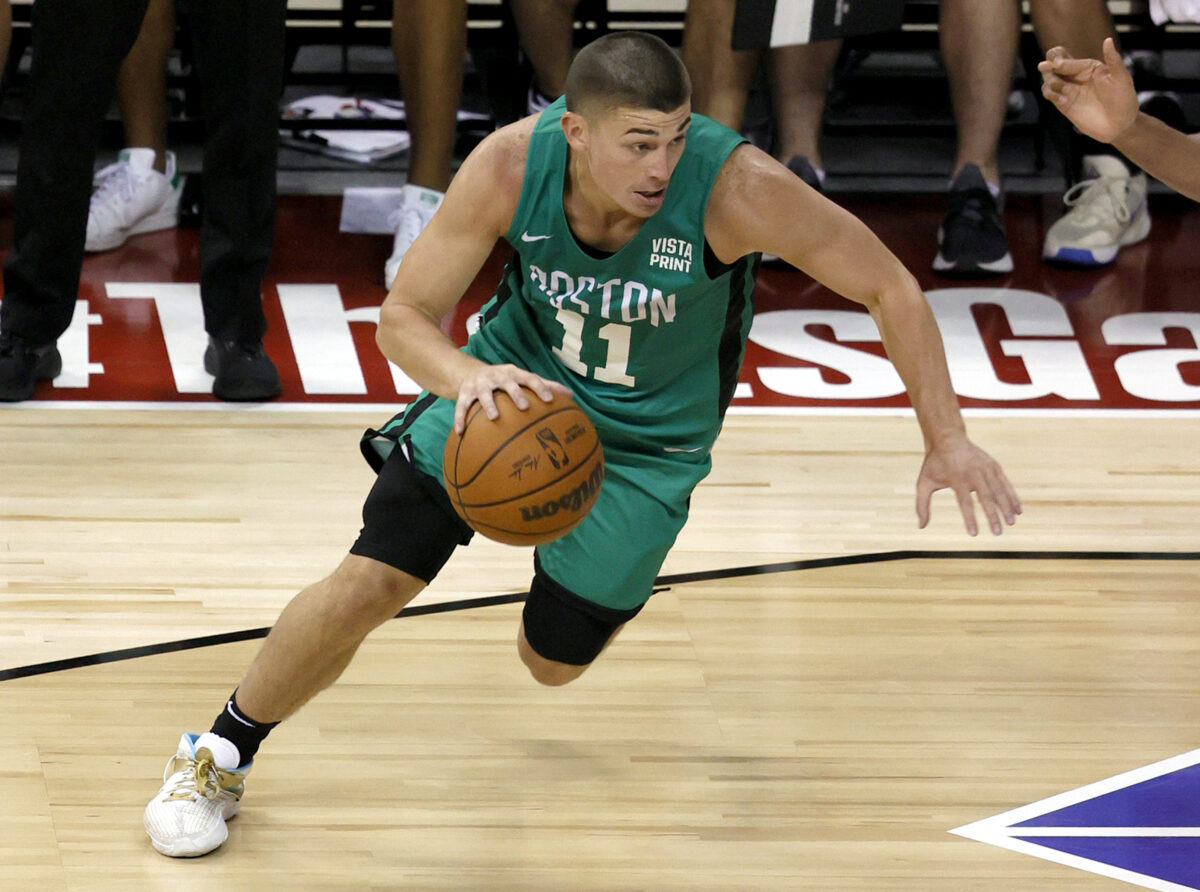 Did Boston Celtics second-year point guard Payton Pritchard make a mistake by leaving Las Vegas Summer League to go participate in a pro-am tournament in Portland, Oregon? The Celtics were on an absolute tear with him in their initial slate of games before the West Linn native took leave to go drop a boatload of points in the Oregonian exhibition series.

When he came back and convinced Boston’s coaching staff to re-insert him into the summer Celtics’ rotation, the same magic wasn’t there. Should he have simply stuck around if the goal was to win a summer league championship, or did Pritchard simply have an “Off Night”?

The hosts of the CLNS Media “A-List” podcast discussed this quandary on their latest episode, with Kwani A. Lunis and A. Sherrod Blakely debating whether Fast PP left SIn City too soon.

Wherein we grade each individual performance throughout the 2021 Las Vegas Summer League of Boston’s roster. 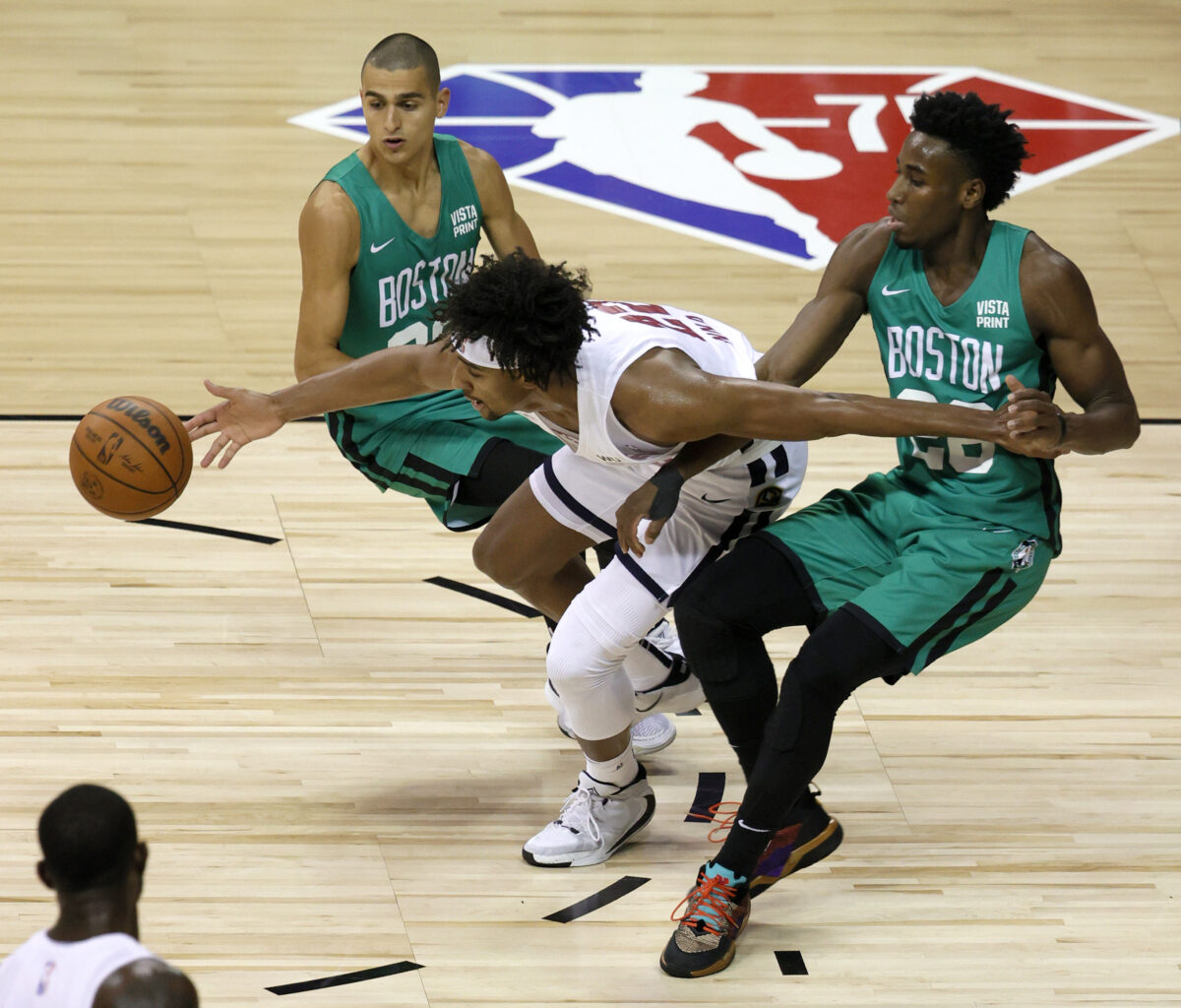 The Boston Celtics may have stumbled at the finish line by dropping the 2021 Las Vegas Summer League title game to the Sacramento Kings, but there were still plenty of positives to take home from the (normally) annual Sin City exhibition series for the Celtics.

But how would we grade the performances of the 13 players who suited up for Boston this offseason? As the team with the biggest point differential and an undefeated record heading into the title game, there’s certainly plenty of praise to be distributed, but what about criticism? Can one even make meaningful assessments of players given the reputation of summer league play as a largely inaccurate indicator of future success?

We’re going to try just the same, so let’s get started.

Get to know the Angola native’s game better with this highlight video. https://t.co/D9NOyBSKU2

After a brief hiatus, there are a ton of reasons why the basketball world was glad to have Las Vegas Summer League back on the schedule. 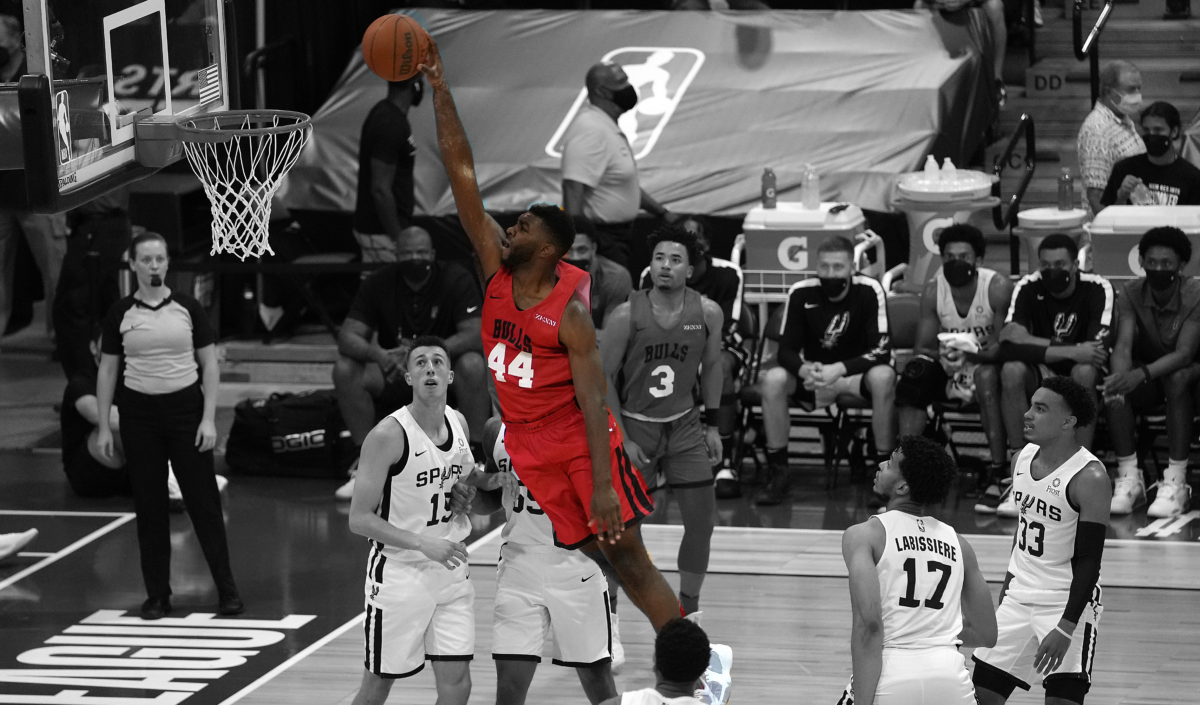 After a brief hiatus, there are a ton of reasons why the basketball world was glad to have Las Vegas Summer League back on the schedule.

While summer league was unfortunately canceled in 2020, the even took place once again this year. Fans have already seen star rookies such as Cade Cunningham and Jalen Green make their pro debuts. They have also seen LiAngelo Ball play particularly well for the Charlotte Hornets.

But as noted by Derek Murray, one of the main benefits of summer league is that NBA teams can allow their younger role players to get more reps on the ball. Players who are typically off-ball shooters or slashers may get the nod to initiate offense for their squad.

Summer League is for testing which of your secondary creators can run point.

Below, we have outlined some of the players around the league who have made the most of their opportunity as the primary creator for their teams in summer league action.

Although these players may not be afforded such looks during NBA action because they’re surrounded by more star power during the regular season, it is incredibly helpful for their long-term development and gives teams a sense of what these players can eventually become.

Note that all player roles are defined by their play-type usage based on the offensive archetype definitions provided by BBall-Index.com. All stats are pulled from Synergy Sports Tech unless specifically noted otherwise.

The annual NBA Las Vegas Summer League tournament has become a valued tradition to the biggest basketball fans, as it’s everyone’s first opportunity to catch the league’s future stars suit up for their new clubs for the first time, while also giving … 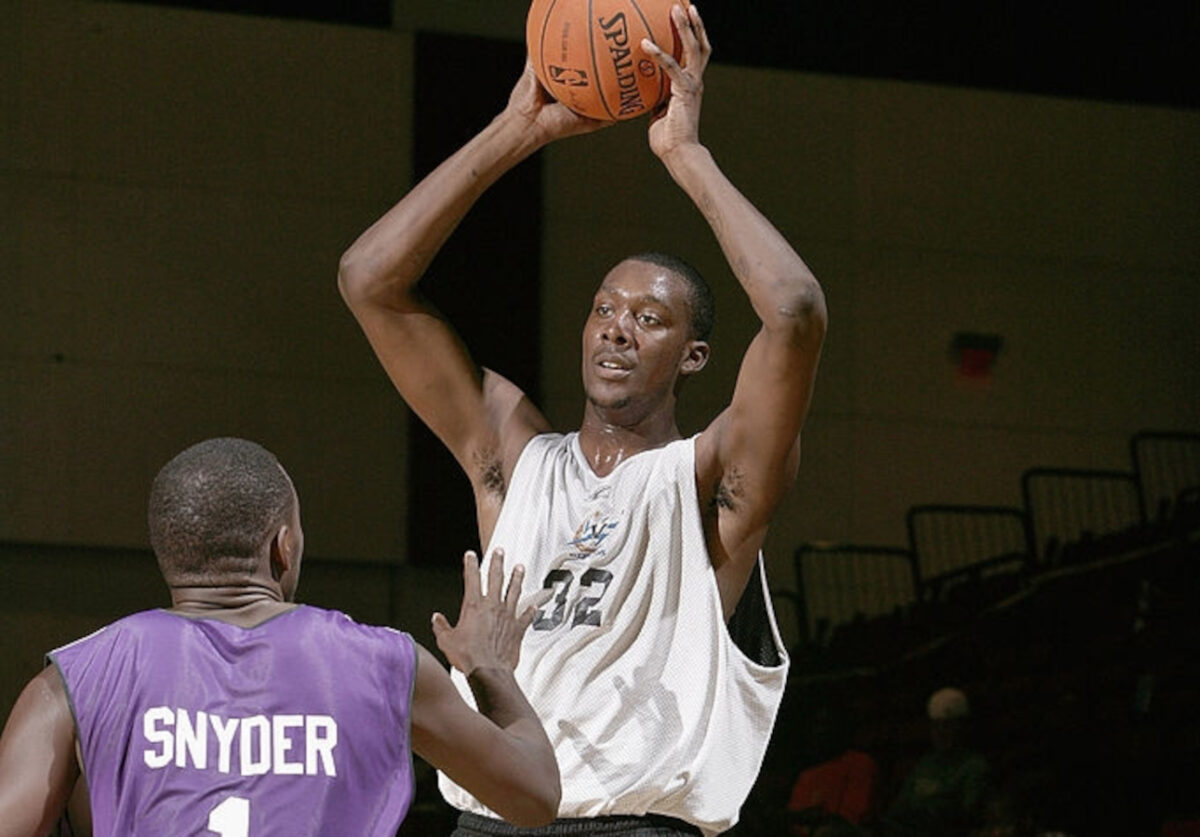 The annual NBA Las Vegas Summer League tournament has become a valued tradition to the biggest basketball fans, as it’s everyone’s first opportunity to catch the league’s future stars suit up for their new clubs for the first time, while also giving everyone a glimpse of potential diamonds in the rough who could unexpectedly work their way onto teams’ rosters.

Vegas Summer League is also a place where many fringe NBA veterans find themselves every year, as their names are big enough to land them coveted spots on those teams, even if their games don’t hold that much promise.

As such, the all-time leading scorers in Vegas Summer League history, for the most part, aren’t future or current NBA stars, but veteran end-of-bench pieces trying to fight their way back in the NBA.

Below, check out the top scorers in Las Vegas Summer League history.

Although the annual NBA Summer League can be a good bit of fun to follow, fans of the sport have realized by now that you shouldn’t read too much into great performances there. With that said, it’s a pretty big red flag if top up-and-coming … 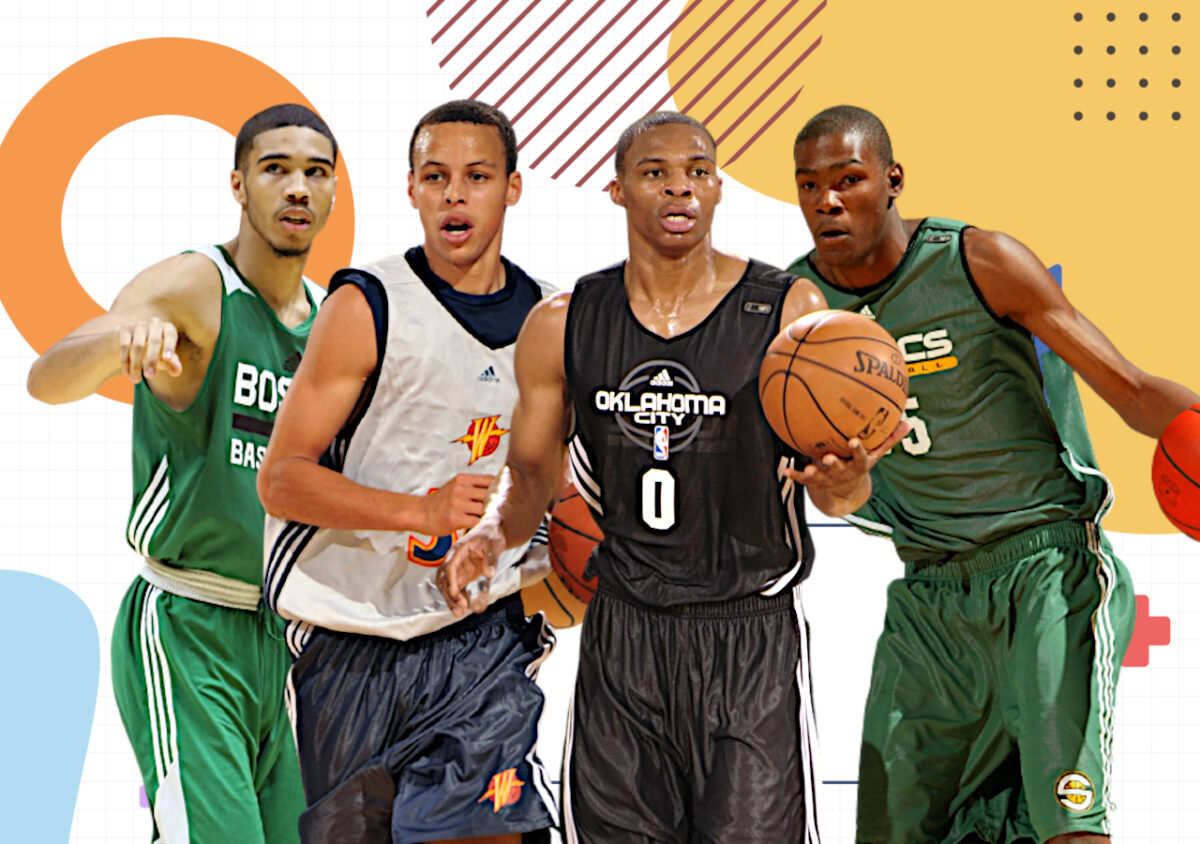 Although the annual NBA Summer League can be a good bit of fun to follow, fans of the sport have realized by now that you shouldn’t read too much into great performances there.

With that said, it’s a pretty big red flag if top up-and-coming prospects struggle in that setting.

The Splash Brothers, Stephen Curry and Klay Thompson, and Kevin Durant came out firing in their first tastes of summer ball with the pros. Others not so much.

Below, check out how some of your favorite NBA stars performed in Summer League.

The Celtics improve to 3-0 in Las Vegas with another blowout win: 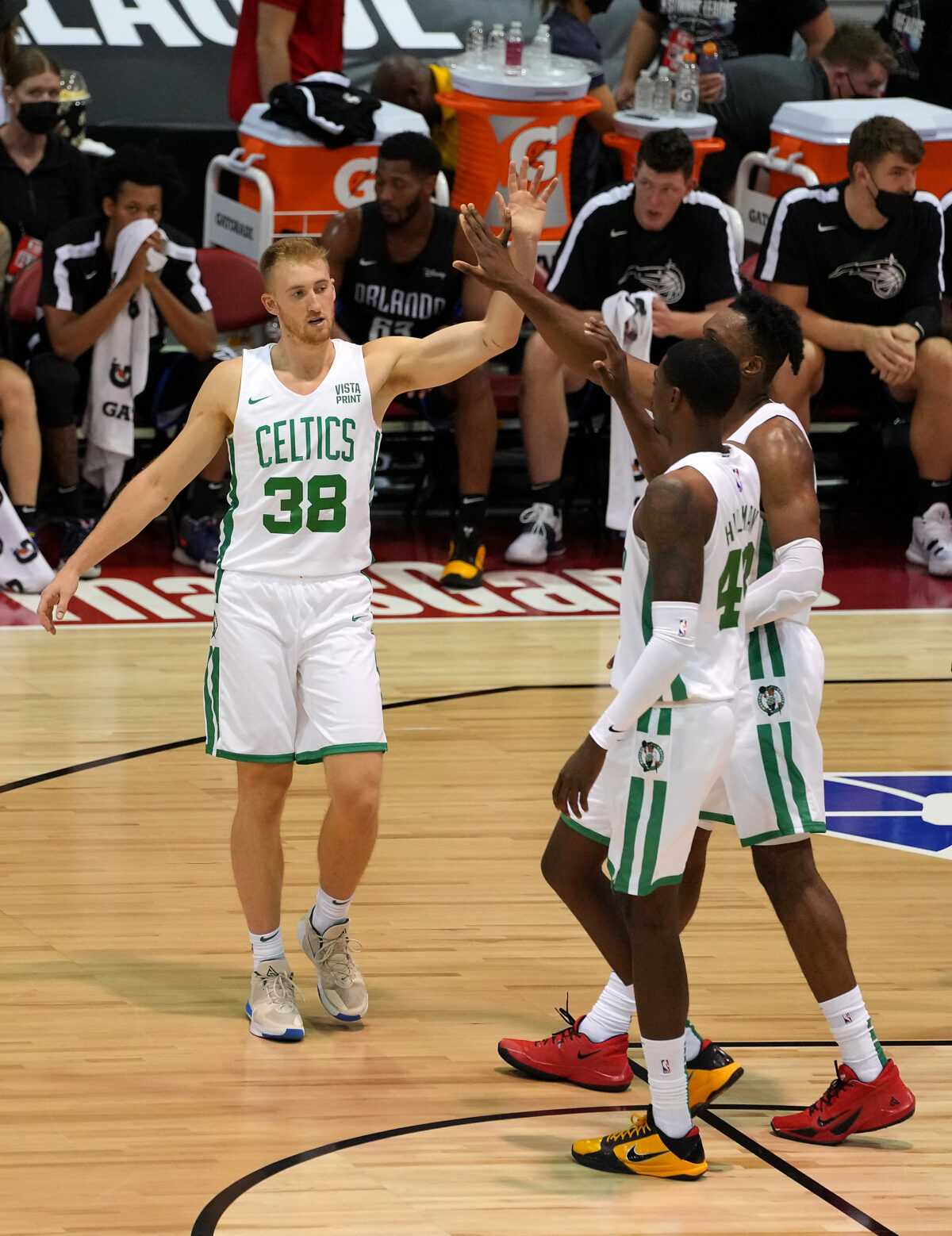 While the second half of the Celtics’ third Las Vegas Summer League contest may have featured an Orlando team playing without its trio of starting guards, Thursday night’s game was over by halftime.

Boston picked up where it left off against Denver as it quickly built a double-digit lead that was never surrendered in a 108-71 win over Orlando at Cox Pavilion.

At the summer league, there are always a few players who don’t belong. That’s meant as a compliment in terms of them not belonging on the floor. Boston has multiple summer league stars that fit that description, and they didn’t disappoint. Coming off of a nearly perfect shooting game and 30-plus point performance, Aaron Nesmith showed his mid-range shot creation to the tune of 7 first-quarter points.

Rookie Sam Hauser came off the bench late in the first period to nail back-to-back 3s and extend Boston’s lead to 9 at the end of one. By halftime, Payton Pritchard had begun to percolate: He led the way with 11 points and the Celtics had built their lead to 19.

Whether by design or because Orlando let things get out of hand early, the trio of Jalen Suggs, RJ Hampton and Cole Anthony only played in the first half and combined to go just 5-18 from the field.

Without its lead guards, Orlando struggled even more offensively and let the lead balloon to a final score of 108-71. It was Hauser’s day. The rookie led all scorers with 21 points off the bench on 6-10 from 3. The Virginia product looked like he was catching up to the pace.

“The first two games I was kind of getting used to (the game speed) and couldn’t make a shot,” Hauser told reporters after the win. “But I think in this third game, I really got my legs underneath me and adjusted.”

Nesmith pitched in 18 while Pritchard added 17 as the Celtics improved to 3-0 in Las Vegas.

Up next for Boston is another undefeated team, Philadelphia, on Saturday at 5 p.m. EDT.

The sophomore Celtics put on a show as Boston rolled over Denver: 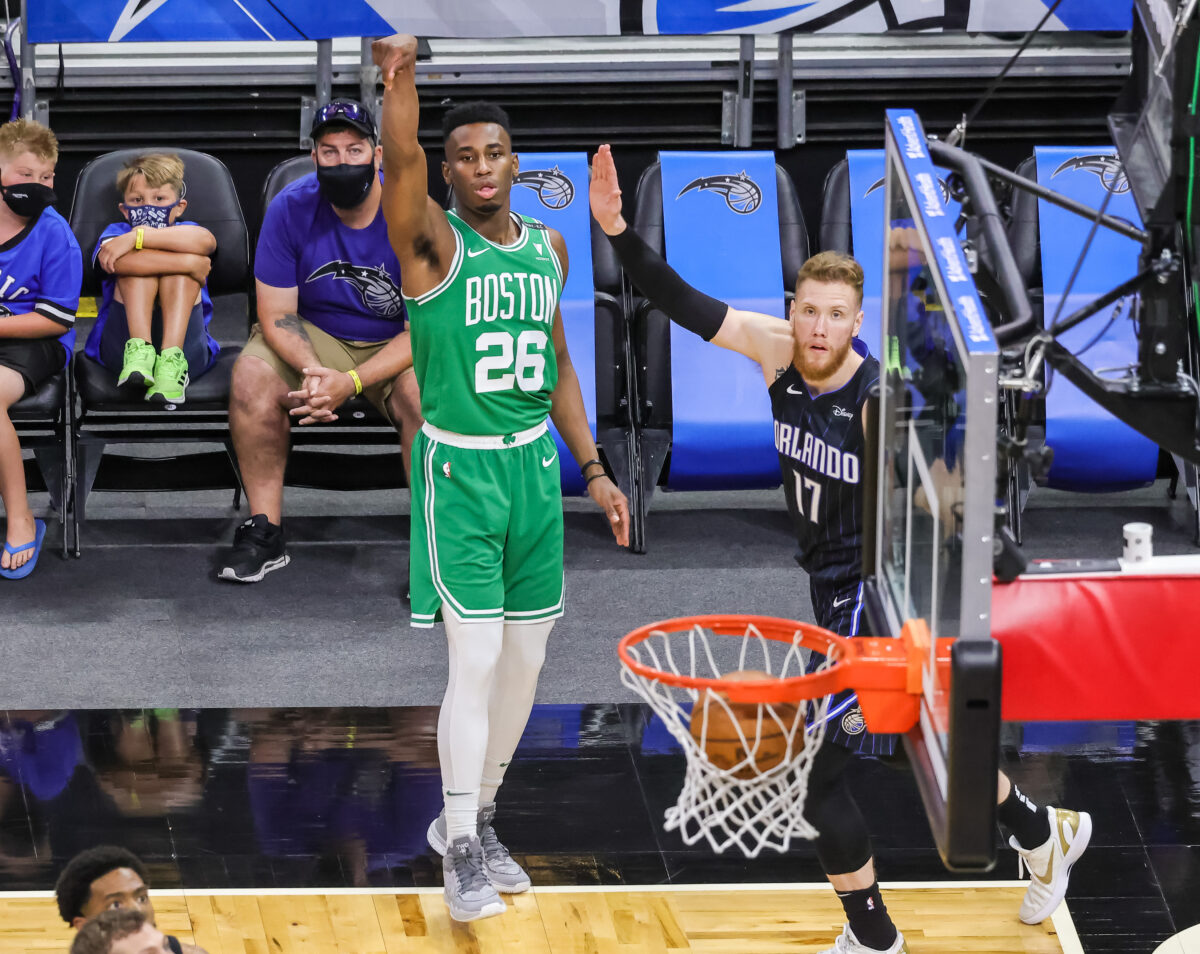 The Celtics started hot and stayed hot in their second game of Las Vegas NBA Summer League on Tuesday evening. It was rising NBA sophomore Aaron Nesmith who stole the show offensively. The Celtics guards proved too much for Denver rookie Nah’Shon “Bones” Hyland and the Nuggets in a 107-82 blowout win.

Behind scorching shooting in the first quarter, the Celtics built an 8-point lead they never gave up. Boston went 7-of-8 from 3 through the first 10 minutes of action; Nesmith and Payton Pritchard combined to connect on all five of their attempts.

The second quarter saw the Nuggets struggling to get stops with Nesmith, Pritchard and Romeo Langford handling the scoring load. Langford had the dunk of the day in Las Vegas when he exploded over Davon Reed for a right-handed punch:

WHAT A DUNK BY ROMEO LANGFORD 😱

The second half was largely cruise control for a Celtics squad that built a 20-point halftime lead. After promising debuts, Yam Madar and Juhann Begarin were quiet in limited reps. Tuesday provided a chance for the experienced Celtics to take over.

Nesmith finished with a game-high 33 points while shooting 7-of-9 from distance. The former Vanderbilt star showed flashes of the shooter he could become, and he is growing in confidence. Following his 5-of-14 shooting performance in Game 1 with one of his better shooting games ever is proof of growth.

“In the gym yesterday, I made sure I went through the same routine, changed nothing, kept the same confidence in my shot, and then came out today and just shot it the way that I know I can every day,” Nesmith said in the postgame press conference.

The Celtics are 2-0 heading into what should be a terrific game on Thursday night against Jalen Suggs and the Orlando Magic.

Summer league is usually for recently drafted players or young free agents giving the NBA dream a shot, but not all time. There are also veterans who use that platform to try and reignite their NBA careers. Among those older guys playing this summer … 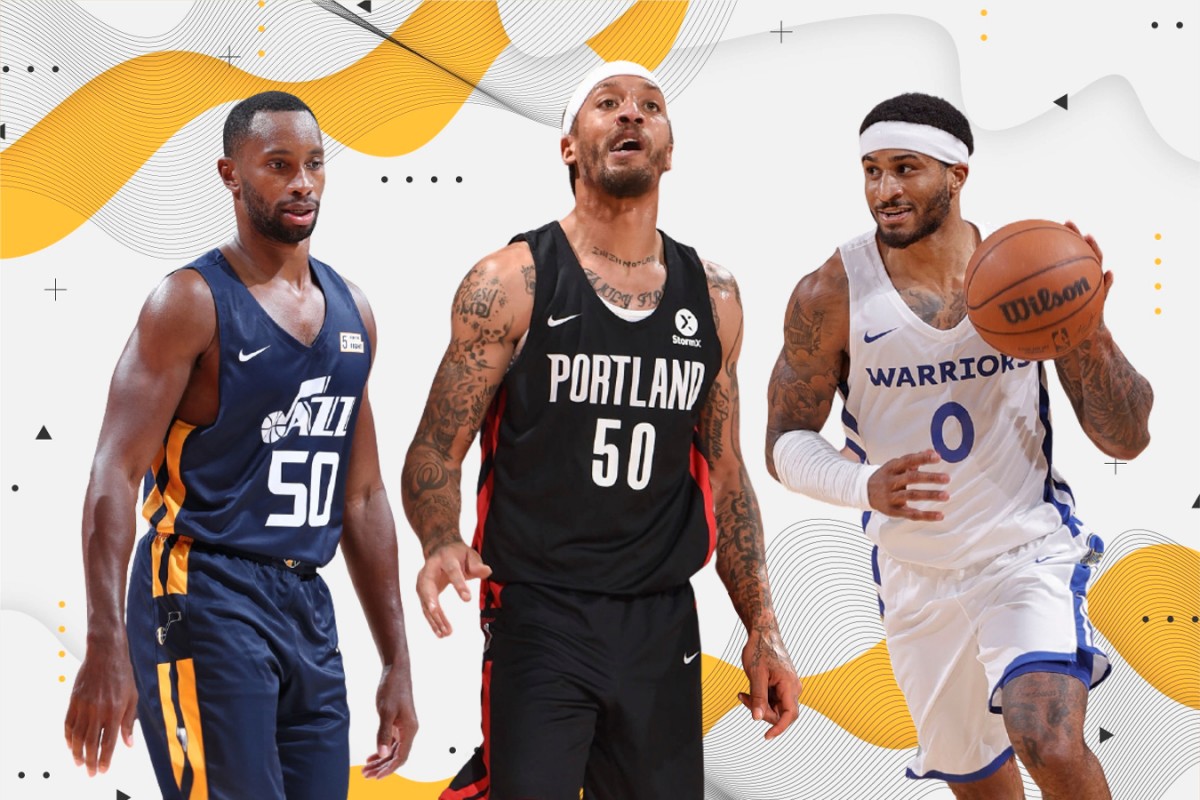 Summer league is usually for recently drafted players or young free agents giving the NBA dream a shot, but not all time. There are also veterans who use that platform to try and reignite their NBA careers.

Among those older guys playing this summer are very recognizable names like Michael Beasley and Kenneth Faried, both of whom are suiting up for the Portland Trail Blazers, as well as Brandon Knight (Brooklyn Nets) and many others.

Below, check out the oldest players participating in summer league this year.