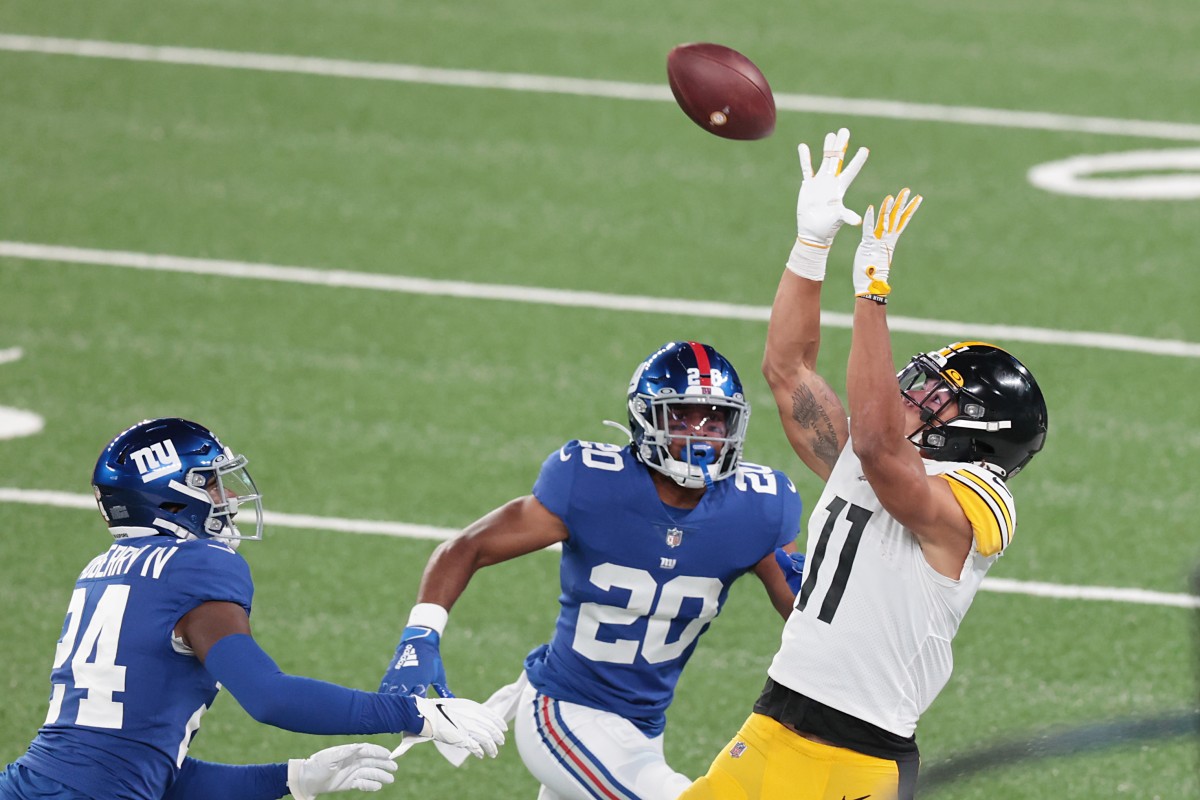 *Currently stands as the most improbable completion of Week 1#PITvsNYG | #HereWeGo pic.twitter.com/YRiz2q7Dgi

Can we re-live the beauty of Chase Claypool’s catch for a moment? The rookie got his highlight reel started from his very first catch as a pro.

The Steelers needed something to go their way. After two failed run plays, Ben Roethlisberger fumbled on a third and five and forced a punt.

The defense, as usual, held their own in the Giants next drive. It was up to the Steelers offense to get points on the board, or it was going to be a long night.

Going no-huddle on 3rd and 9, Ben dropped back and aired it out to Claypool, who jumped up between two defenders to haul it in. Claypool’s focus and awareness were that of a veteran.

Defenders closing in on him, Roethlisberger put trust into his newest wide receiver to go up and get the ball. It was a key moment that allowed the drive to continue.

With a 13.8 percent probability of being caught, Claypool’s reception was tracked by Next Gen Stats as the most improbable completion of Week 1.

One of the questions heading into Monday night was how often Claypool would be incorporated into the passing attack. He caught two targets for 39 yards, but the 28-yarder was a thing of beauty. It’s one of many more plays he’ll make in this league, and it was exciting to see.

An incredible catch by @ChaseClaypool on the sideline! #HereWeGo

Here is a frame-by-frame of the stunning catch. 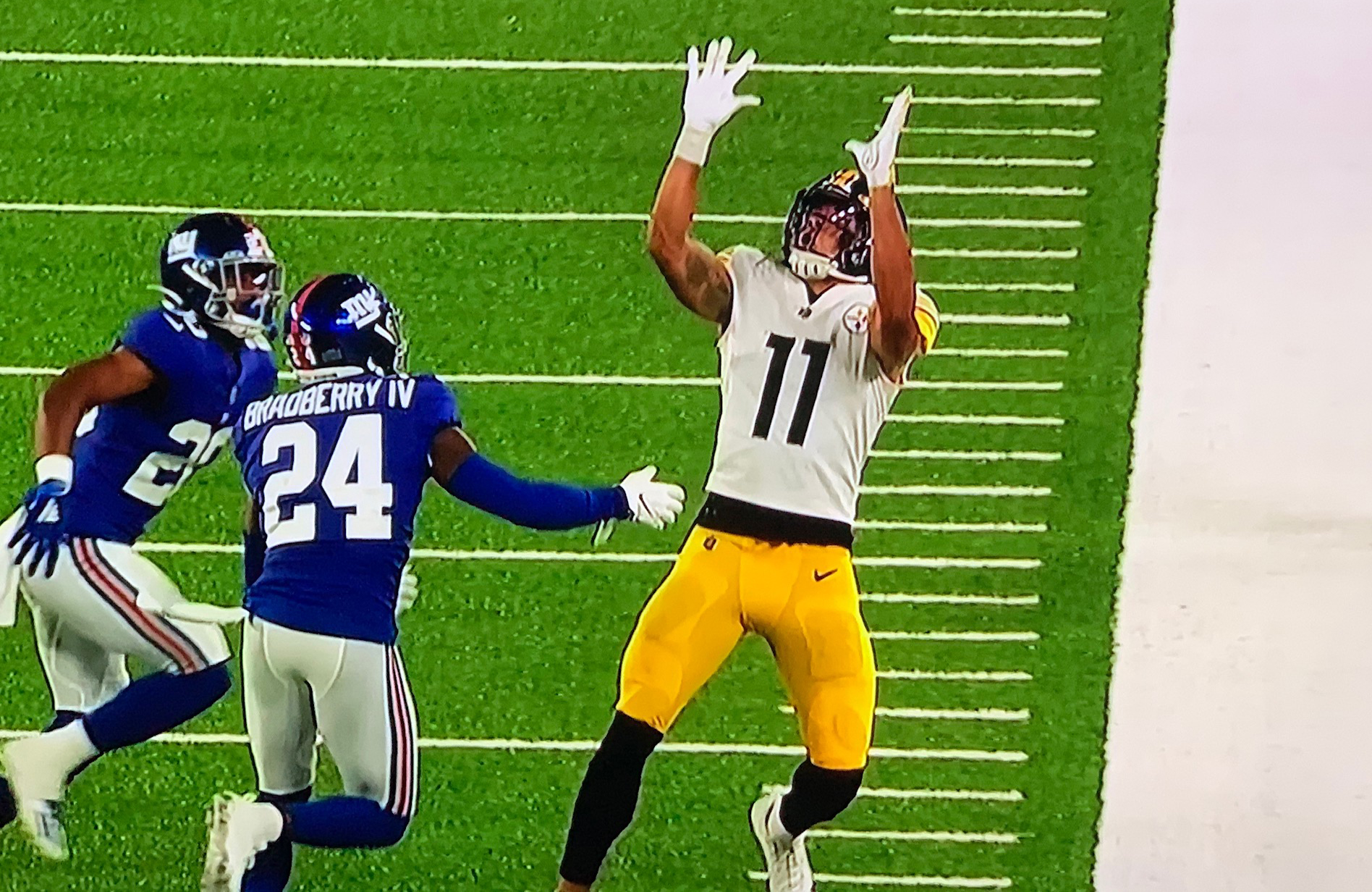 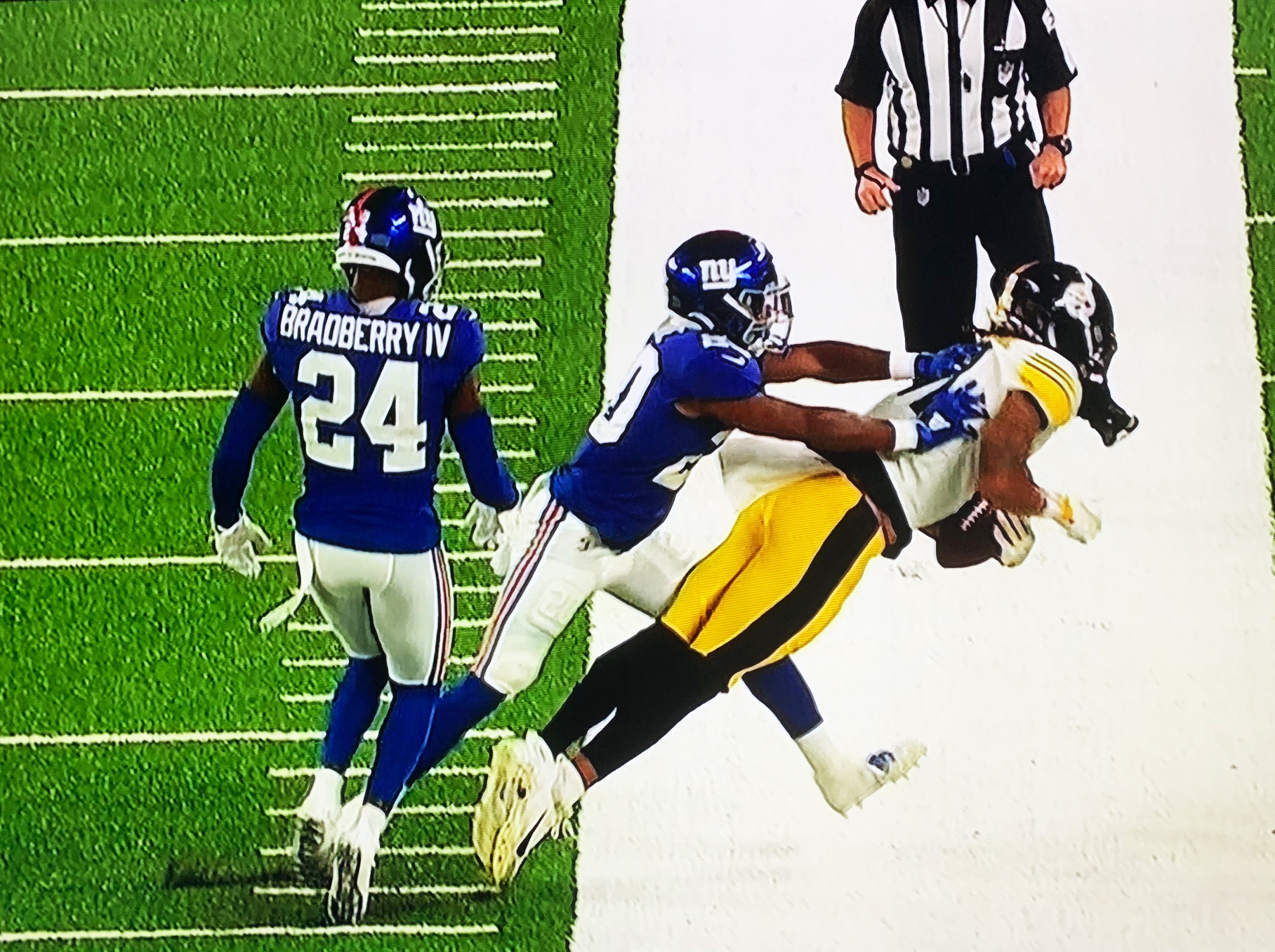 The Steelers shut Saquon Barkley down on Monday night. 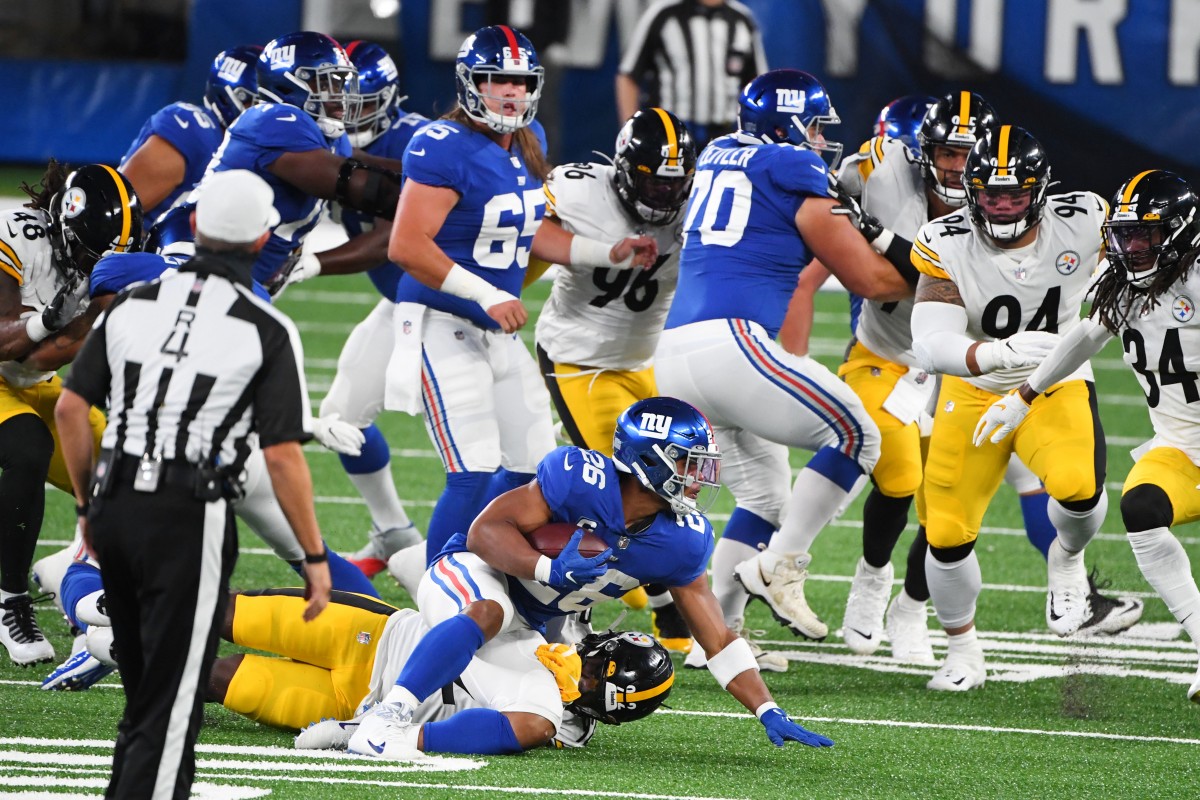 The Pittsburgh Steelers plan on Monday night was pretty simple. On defense, the plan had two parts. The first part was to overcommit to stopping New York Giants running back Saquon Barkley.

The second part of to pray the secondary could hold up without the typical level of support by the front seven they had grown accustomed to. In the end, everything worked out as the [lawrence-related id=476277] and the calculated risk really paid off.

After the game, head coach Mike Tomlin was asked about his plan to focus so heavily on Barkley and how it allowed the Giants passing offense to pick on the Pittsburgh secondary. Tomlin noted the team “put the secondary in harm’s way” with their philosophy but was happy it paid off.

Pittsburgh used a mix of blitz-heavy sets designed to shoot gaps and force Barkley to run east and west where the Steelers defense could run with him. This often left the Steelers players in coverage to fend for themselves and allowed Giants quarterback Daniel Jones to finish with 279 passing yards. 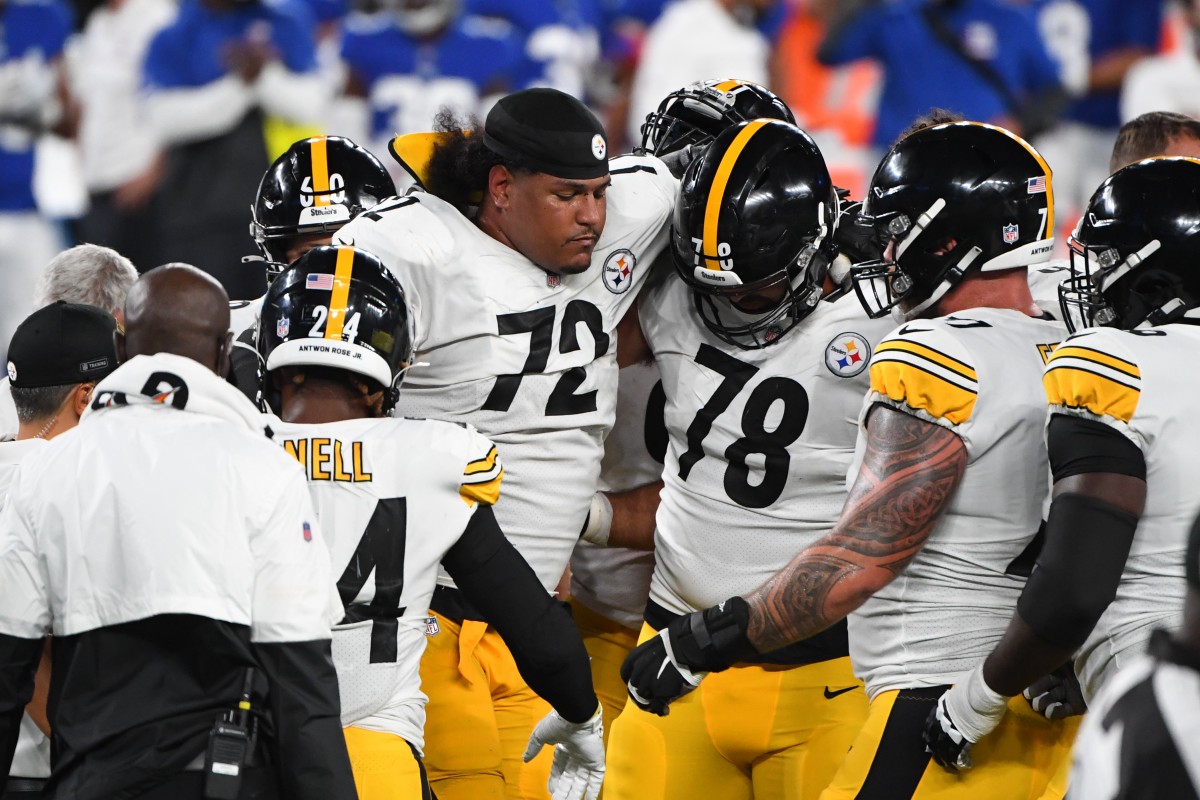 Fortunately the Steelers beat the New York Giants comfortably 26-16 but more importantly lost the right side of their offensive line in a single drive late in the game as well as their starting running back in the first half. Head coach Mike Tomlin updated everyone in the injuries but in typical Tomlin style simply said they were being evaluated.

Running back James Conner suffered an ankle injury in the second quarter and was unable to return. According to head coach Mike Tomlin, the injury is being evaluated. Conner was walking on the sidelines during the game so the injury might not be serious. The Steelers were in control of the game and his replacement Benny Snell Jr. had a great game.

The other two injuries feel much more significant. Starting right guard Stefen Wisniewski left with a pec injury and starting right tackle Zach Banner suffered what looked like a nasty knee injury on the same drive.

Banner was seen visibly shook on the sidelines with tears in his eyes as he was put on a cart. If Banner cannot go, Chuks Okorafor and if Wisniewski is in the same boat, rookie Kevin Dotson will take his spot until David DeCastro can return from an injury of his own.

Cam Heyward gets the first interception of his career. 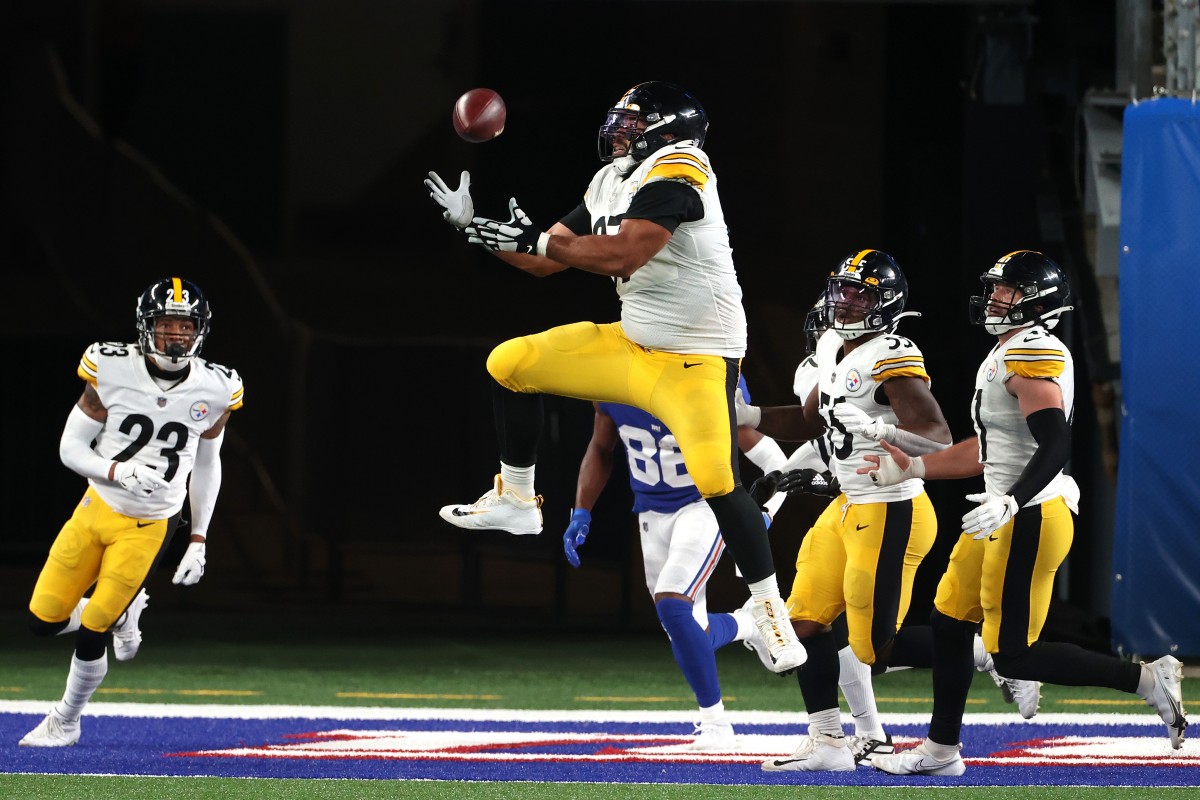 Pittsburgh Steelers defensive tackle Cam Heyward has had a tremendous career. 54 career sacks, 30 passes defended, six forced fumbles 79 tackles for loss and 117 quarterback hits. But one stat had eluded him.

Heyward finally got his first career interception on Monday night against the New York Giants. Outside linebacker Bud Dupree ran down Daniel Jones and hit his arm as he threw to the end zone.

The football seemed like it was in the air forever but Heyward pulled it down in the end zone, ending a potential scoring drive for New York.

The Steelers showed unity during the national anthem. 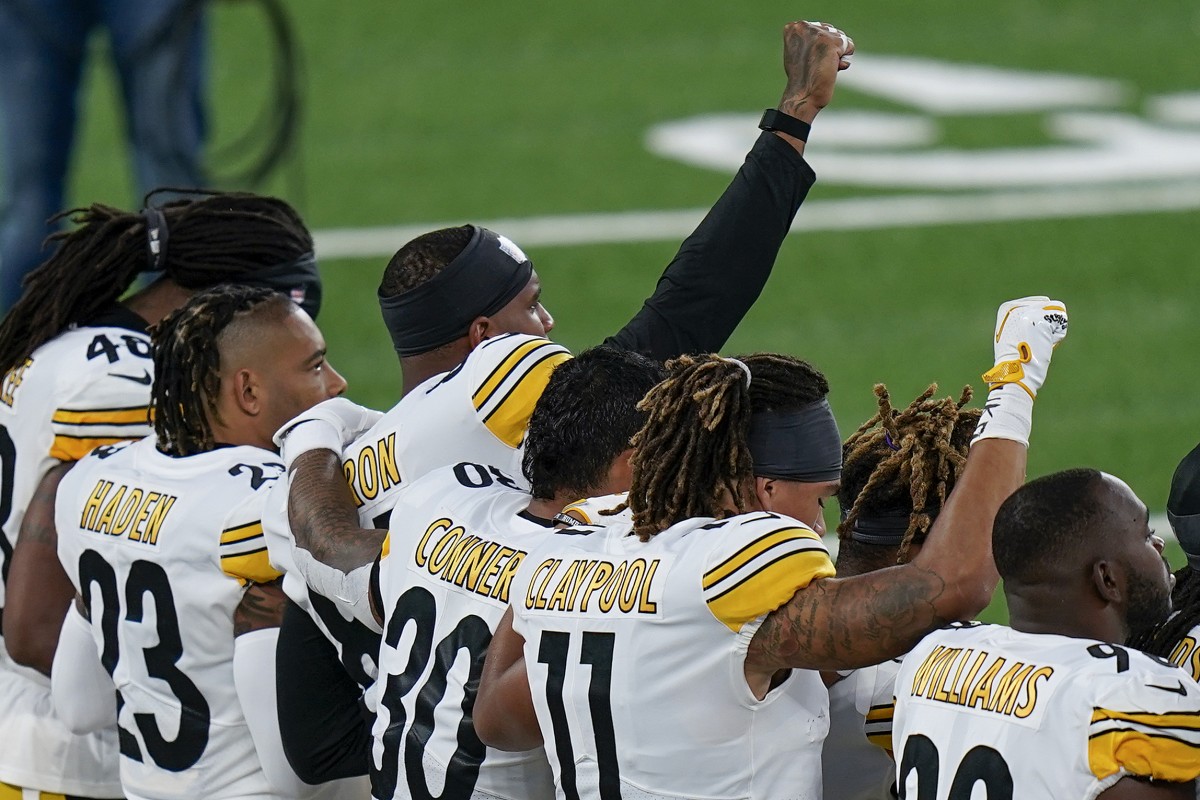 Everyone wondered what the Pittsburgh Steelers would do during the national anthem before tonight’s game against the New York Giants. They had kept any plans very quiet. So what did they do?

Pittsburgh went out united as a team, stood together and held a large banner that said “Steelers against racism.” Meanwhile the Giants players were given the option of standing or kneeling during the anthem and there was a mix of both.

In addition, the Steelers chose to stay in the locker room while the stadium played “Lift Every Voice and Sing.”

How do you all feel about how the Steelers handled the pregame and do you expect anything to change going forward?

The Steelers plan to pay tribute to Antwon Rose Jr. 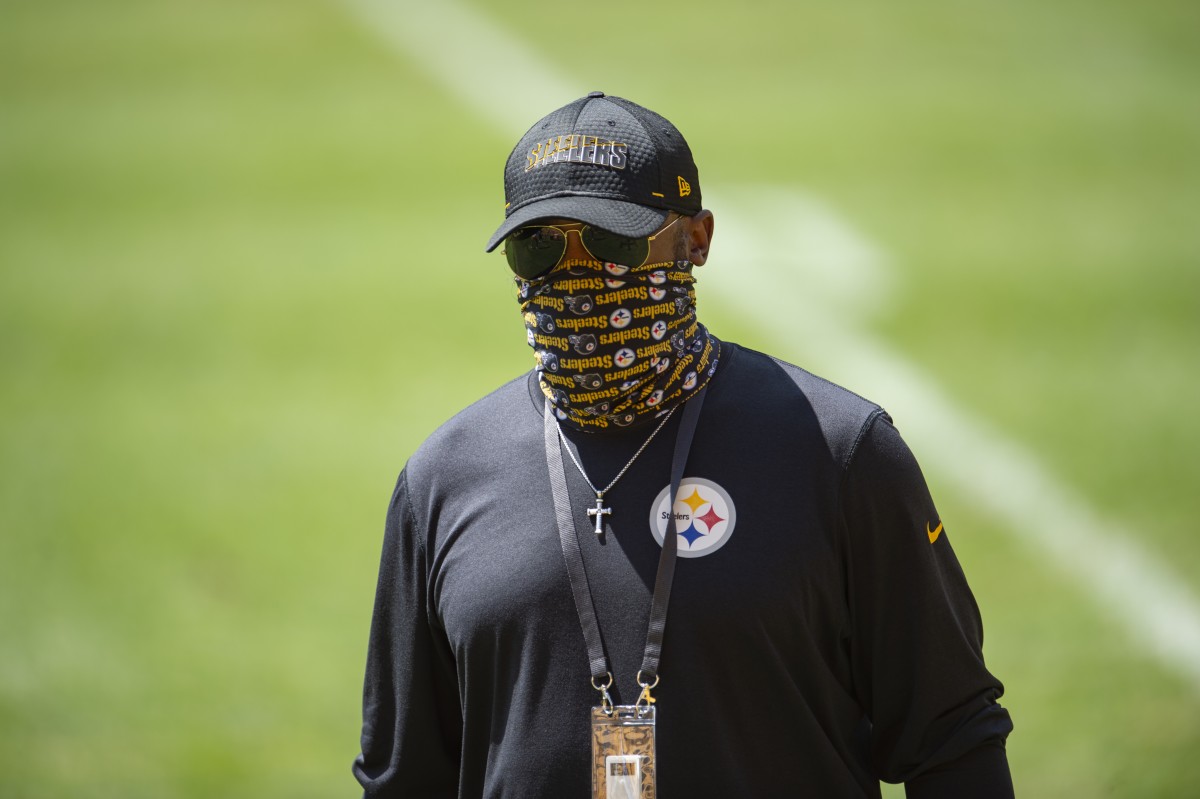 The Steelers said they're unified in any social justice statements or demonstrations this season.

This morning they've begun posting pictures holding hometown signs in calls to end racism, and announced they'll all wear Antwon Rose Jr.'s name on the back of their helmets.

We don’t know the full extent of how the Pittsburgh Steelers will partake in demonstrations in the name of social justice but we did get a hint of one. According to ESPN reporter Brooke Pryor the Steelers plan to wear a helmet sticker paying tribute to Antwon Rose Jr. tonight when they take on the New York Giants.

I am choosing not to share details Rose’s death here as the circumstances are quite divisive and depending on what you believe, can be quite a heated issue. You are more than welcome to search his name and find a narrative that suits you.

The reason the Steelers chose Rose, I assume is largely geography. Rose was from East Pittsburgh, PA. This will be the first time the Steelers have really had any sort of unified action in the name of social justice so it will be interesting to see how the fan base responds on social media.

Here’s how to check out this week’s game. 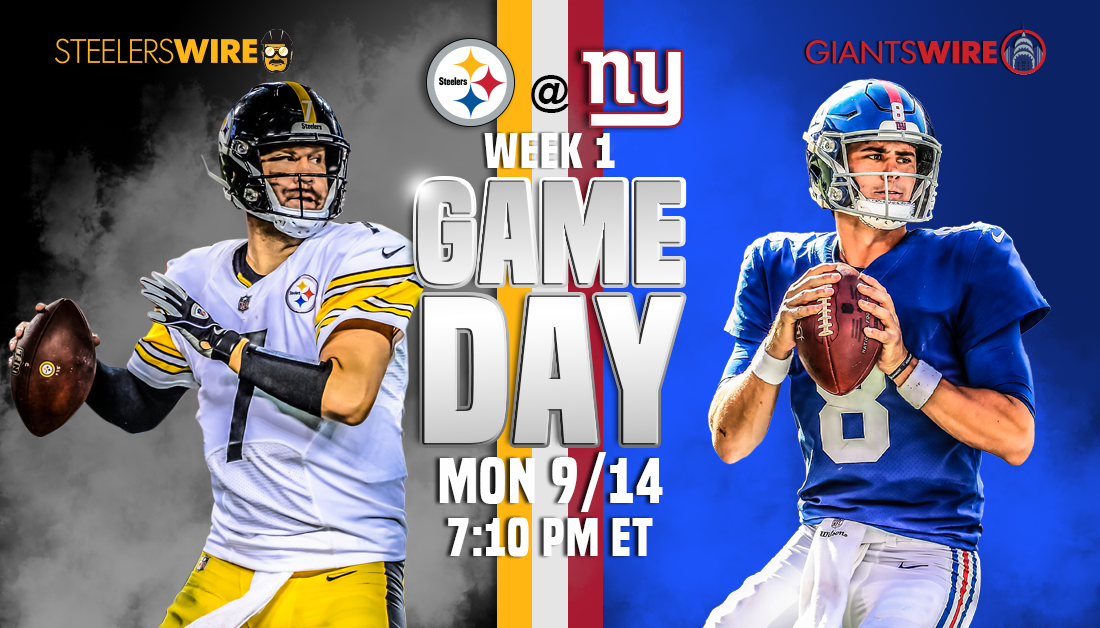 Here is everything you need to know so you can watch, listen to or stream this week’s Pittsburgh Steelers game. The Pittsburgh Steelers travel to New Jersey to take on the New York Giants and hope and hope to get the 2020 season off to a hot start. But no matter what happens anywhere else, they need this win.

Online: You can also tune in online with NFL Game Pass and FuboTV (try it for free).

You can also follow the game with us @TheSteelersWire and of course here on Steelers Wire with our live updates during the game, along with highlights of all the key moments from this week’s game. Join us straight after the final whistle for more in-depth coverage, injury updates, and analysis of all the action.

Special Week 1 Promotion! Bet $1, WIN $100 (in free bets) if either the New York Giants or Pittsburgh Steelers score a touchdown in their Week 1 game. Place your legal, online sports bets in IN, NJ and WV at BetMGM. Terms and conditions apply. Bet now!

Giants quarterback Daniel Jones struggled with fumbles lost in 2019, and the Steelers defense excellent in nabbing them. 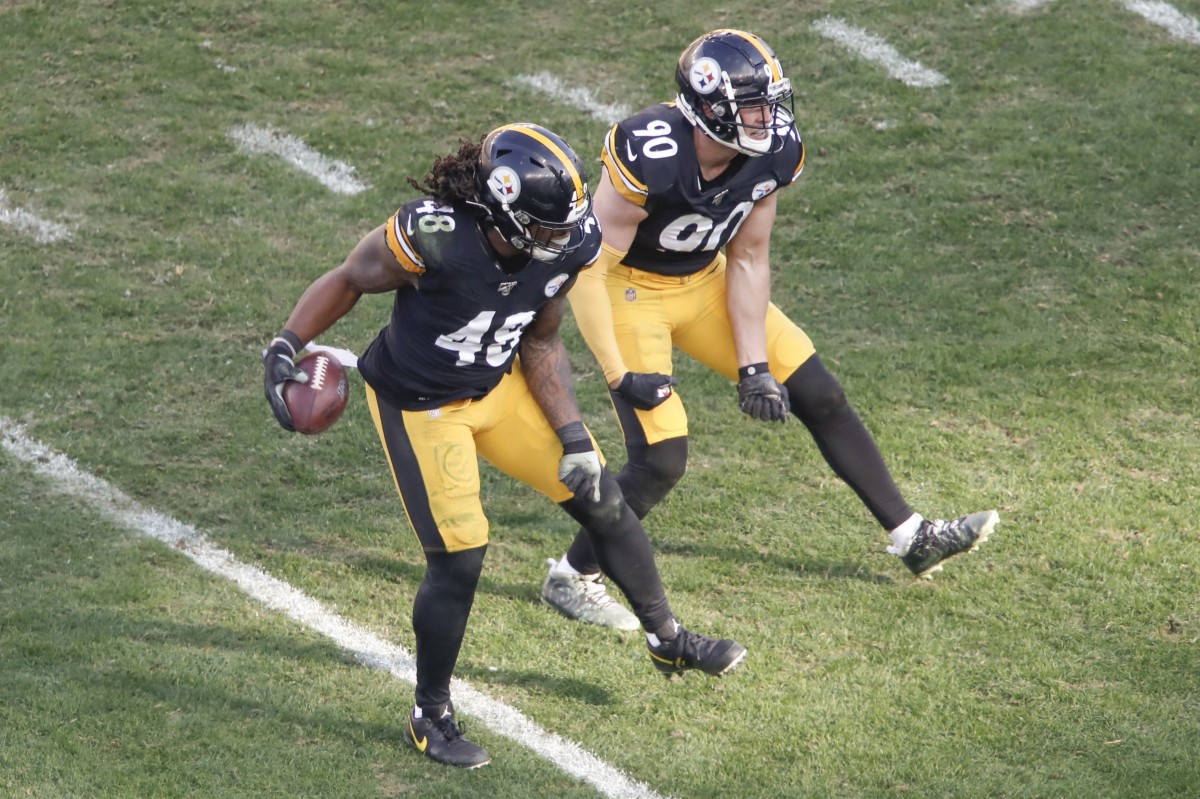 The Steelers 2019 defense was hungry for turnovers. The unit satisfied that hunger by devouring 38 combined interceptions and fumble recoveries, and its .203 turnover average was good for first in the league. Of those turnovers, 20 were interceptions (second in league), and 18 were fumble recoveries (first in league). Overall, Pittsburgh forced 22 fumbles, for an average of 1.4 per game.

Here’s the breakdown on recoveries:

It just so happens that Giants quarterback Daniel Jones led the NFL in fumbles lost, with eight. Additionally, his 12 interceptions tied him for seventh in the league. If Jones’ turnover struggle continues into 2020, the Steelers defense could be feasting Monday night.

Opportunities were a-plenty for the defense in 2019. They were on the field for 182 drives, third-most in the league. But Ben Roethlisberger is back, and with it, the increased potential for extending drives and scoring points. With fewer opportunities and less pressure to win games, the rate at which they recovered fumbles last season will be challenging to sustain.

But having a go at Jones is an excellent place for them to start.

Special Week 1 Promotion! Bet $1, WIN $100 (in free bets) if either the New York Giants or Pittsburgh Steelers score a touchdown in their Week 1 game. Place your legal, online sports bets in IN, NJ and WV at BetMGM. Terms and conditions apply. Bet now!

The Steelers released the Week 1 injury report on Saturday. 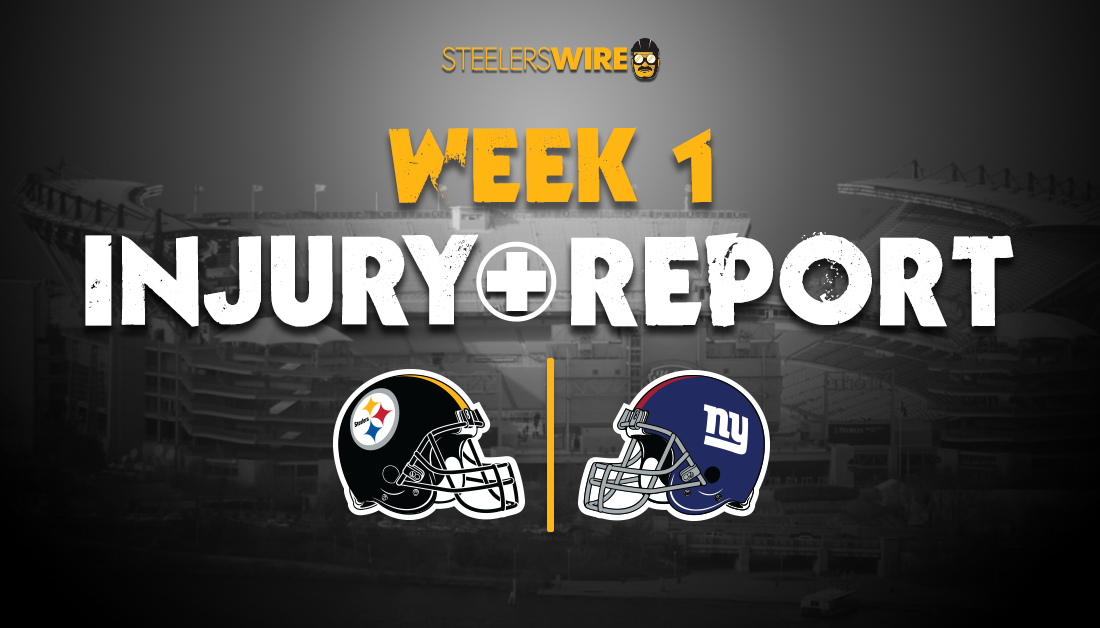 The Pittsburgh Steelers released their Week 1 injury report for the “Monday Night Football” matchup versus the New York Giants.

As expected, right guard David DeCastro, who has been nursing a knee injury since the end of August, is out.

Of course, it’s never good to have a veteran Pro Bowler miss a game; however, considering the rash of injuries league-wide — some season-ending — the Steelers are lucky.

Offensive lineman Stefen Wisniewski, signed to the team in the offseason, will start in DeCastro’s place. Wisniewski came into Pittsburgh to compete for a starting position but due to the COVID-19 pandemic, his opportunity was diminished. DeCastro hasn’t practiced in two weeks, so Wisniewski has done some solid work in anticipation of his first start with the Steelers.

“I have learned in my years in the NFL be ready for anything,” Wisniewski told Steelers.com‘s Teresa Varley during training camp. “I am capable of being a starter in this league. I think I have proven that.”

Experience is not a problem for the 10-year lineman. The Pittsburgh-area native won a Super Bowl with the Philadelphia Eagles and Kansas City Chiefs. Wisniewski also spent time with the Los Angeles Raiders and Jacksonville Jaguars.

The Steelers are focused on slowing down Saquon Barkley. 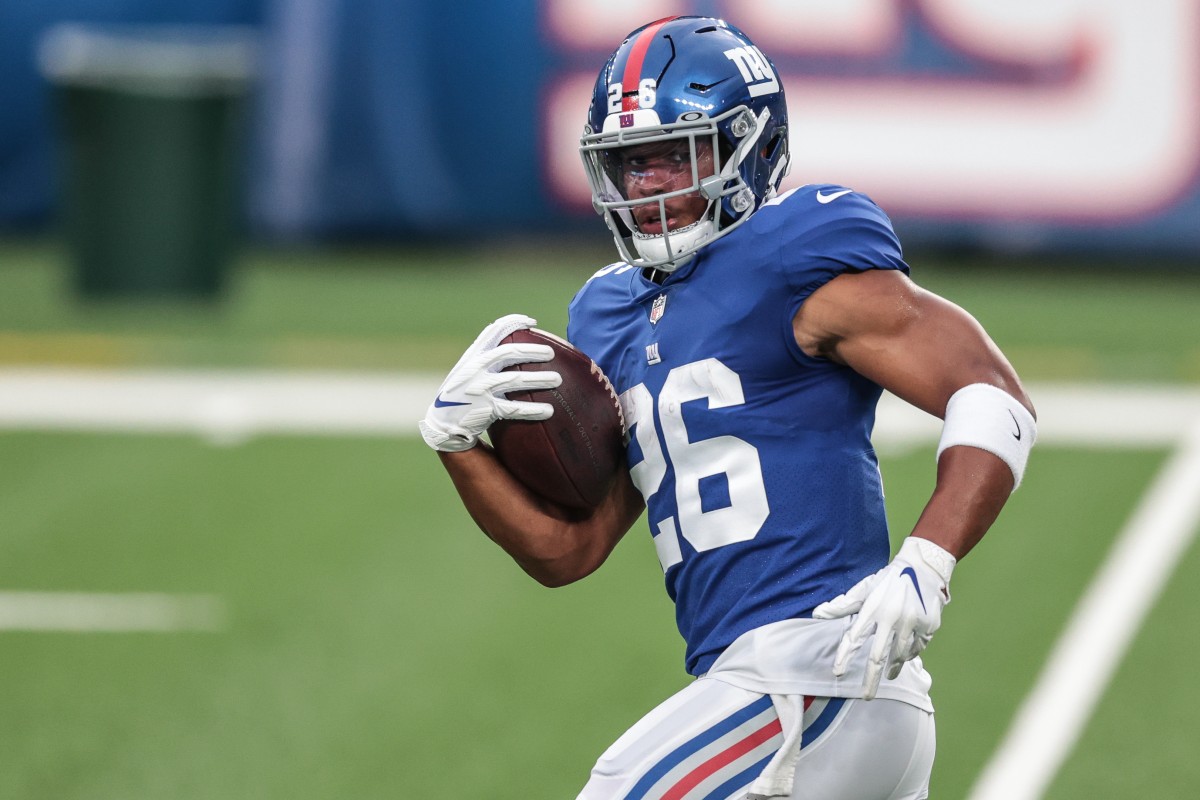 The Pittsburgh Steelers defense understands what has to happen this week to beat the New York Giants. The entire Giants offense revolves around their franchise running back, Saquon Barkley. Pittsburgh knows this as well and they are prepared to focus a great deal of energy to slowing him down.

When outside linebacker T.J. Watt spoke to the media on Friday he acknowledged Barkley’s talent and also made sure everyone understands stopping him is job one.

Saquon is a very well-rounded back. I played against him in college when he was at Penn State. He’s a specimen, very big. He can do everything out of the backfield. That’s why, first and foremost, we have to smash the run.

Barkley has topped 1,000 rushing yards in each of his first two seasons in the NFL. Barkley missed three games last season with an ankle injury but is coming into this season 100 percent.

Last season the Steelers ranked No. 14 in rushing yards allowed and were No. 27 in rushing attempts against. The Steelers should be ready to see a heavy dose of Barkley this Monday night.