The Pittsburgh Steelers found a way to win their fourth straight game. 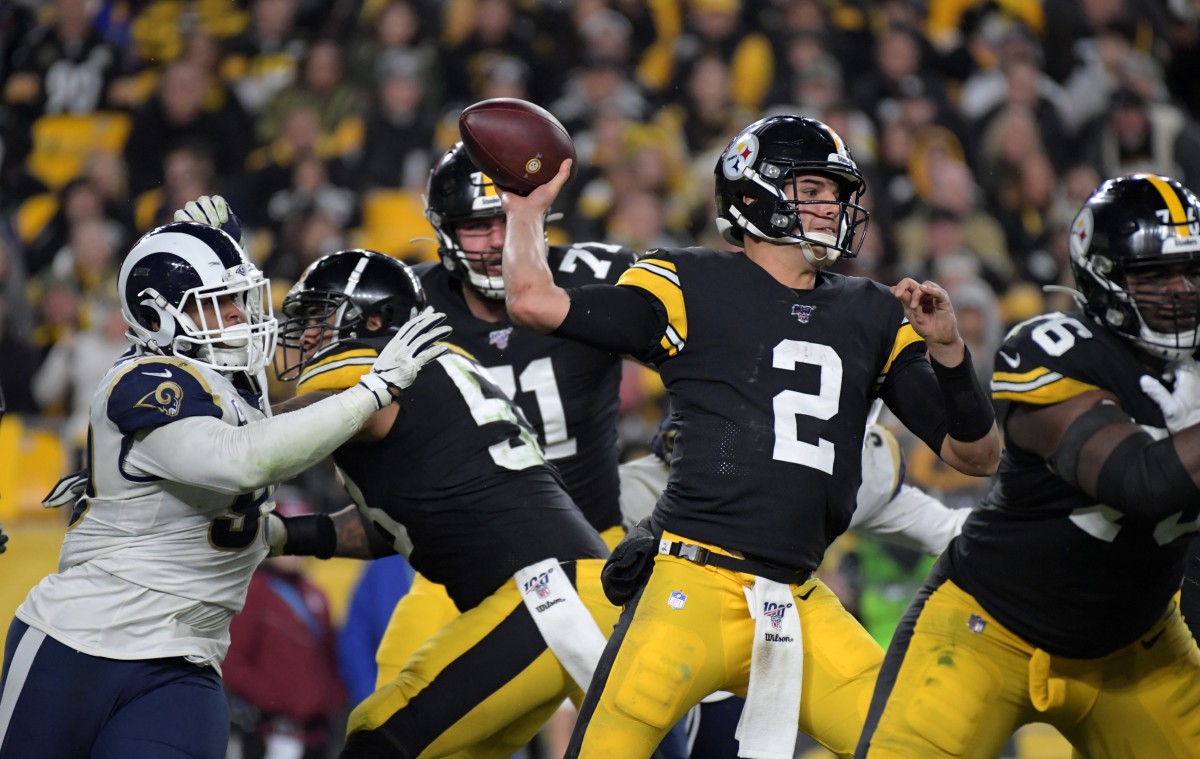 It was ugly but the Pittsburgh Steelers managed to pull off their fourth straight win with a 17-12 victory over the Los Angeles Rams on Sunday. The game was hard to watch with the two teams combining for 24 penalties, six turnovers and displaying poor offenses. That being said, here are my gut reactions.

I mentioned the high amount of penalties already, but the offense was absolutely horrid. I’m going to come out and say it. People that are saying Mason Rudolph’s development is similar to Ben Roethlisberger his rookie season are wrong. Rudolph was essentially given the whole 2019 season to prove to the fans, coaches, ownership and his peers that he was the Steelers quarterback of the future, and if anything, there are more questions now about his future than in Week 2. When Roethlisberger was a rookie, he entered his first game in Week 2 at the Ravens and including the playoffs, the Steelers rattled off 15 straight wins on their way to losing the AFC championship game.

Looking back at that season, Roethlisberger was more limited in his pass attempts. Rudolph had 38 attempts Sunday and seems to be limited in effectiveness and productivity. Roethlisberger was assisted by an effective running game, something Rudolph has not been lucky enough to experience. The Steelers averaged 1.6 yards per rush, and the team’s longest run was 8 yards. Rudolph and Roethlisberger are alike in that both have been bolstered by dominate defenses while they attempt to get their footing as an NFL quarterback. Their on-field performances far from parallel one another.

Now that I’ve lashed out at Rudolph’s poor performance, I have to say there’s plenty of blame to go around. The Steelers as a team have not been consistent receivers for Rudolph. Drops are too common. He doesn’t have a run game to set him up in third-and-short situations on a regular basis and just to top things off, if the Steelers manage to move the ball, they usually end up off-setting their production with offensive penalties.

No running game, no receivers, and too many penalties are not the ideal situation for a young quarterback to flourish in. It’s a frustrating situation, which is only emphasized every week because of the defense’s stellar play. When Minkah Fitzpatrick is the Steelers’ best offensive weapon and he’s on defense, changes need to be made.

As bad as the offense has been, the defense continues to impress. They won the turnover battle for the eighth straight game and limited an inconsistent Rams offense to three points. Week 10 was so difficult to pallet, partially because the Steelers offense let the Rams score nine points while the defense held them to three. The defense consistently made big plays, tallying four sacks, four takeaways, three fumbles by the opposing quarterback and a defensive touchdown.

Fitzpatrick has been clutch and showcased rare awareness and ball skills. T.J. Watt entered the game as the highest-graded edge rusher in the NFL, per Pro Football Focus, one point above the Chicago Bears’ Khalil Mack. Watt tallied five tackles and two sacks against the Rams. Steve Nelson has been a shutdown corner across from Joe Haden, helping shut out Cooper Kupp on Sunday.

Just to top it off, defensive captain Cameron Heyward entered the day as the third-highest graded interior defensive lineman at PFF and was extremely disruptive. He had three tackles, a sack, two passes defended, and three of the Steelers’ nine quarterback hits. Even that impressive stat line doesn’t sum up just how dominant he was at the point of attack. With the Steelers winning four in a row, the NFL has to wonder just how good this defense truly is.

The Steelers leave the friendly confines of Heinz Field on a short week to play the Cleveland Browns on national TV Thursday night. The Browns got their third win of the year in Week 10 at home against a surging Buffalo Bills team. But their offensive line has been extremely shaky, which has forced Browns quarterback Baker Mayfield force the ball downfield under pressure. Mayfield is second in the NFL with 12 interceptions thrown. Don’t look now, but the Steelers are vying for an AFC wild-card spot.

Here’s our gallery of the best pics from Sunday’s big win. 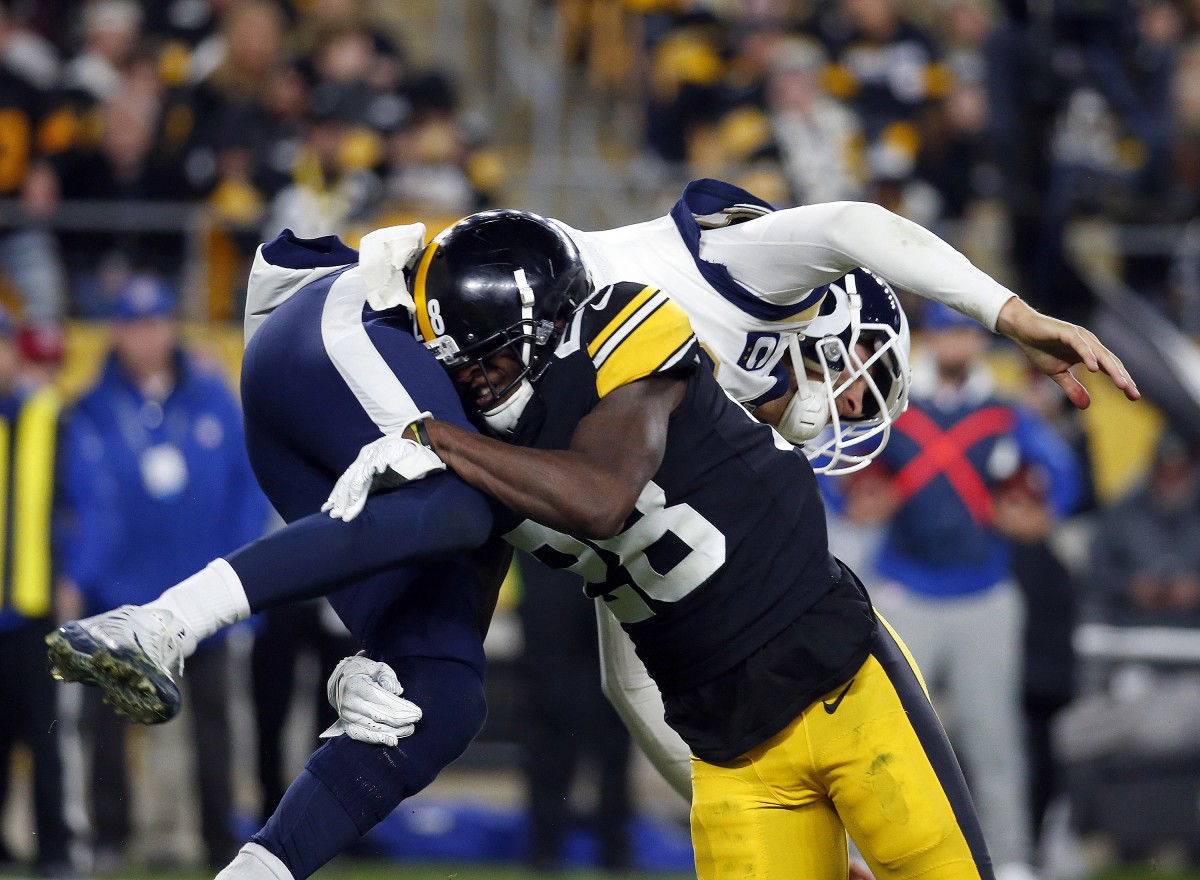 It might not have always been pretty but the Pittsburgh Steelers found a way to get past the Los Angeles Rams and improve to 5-4. If you love defensive football, this game was for you. But if you missed the game we’ve got you covered. Sort of. Here are 70+ photos from Sunday’s big win. 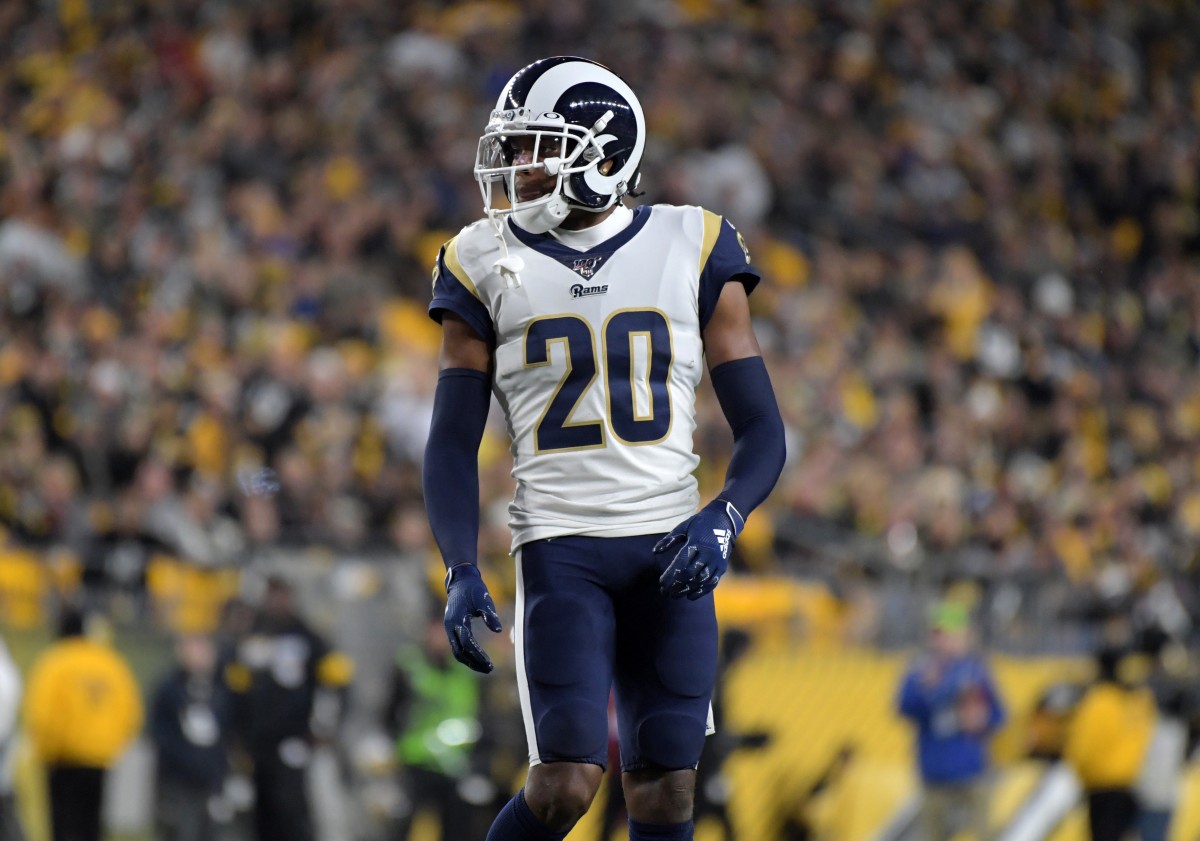 JuJu on Jalen Ramsey: “He said so many cuss words I’ve never heard of.” #Steelers pic.twitter.com/hQ6OumGiKm

One of the marquee matchups of Sunday’s game between the Pittsburgh Steelers and Los Angeles Rams was between wide receiver JuJu Smith-Schuster and cornerback Jalen Ramsey. Smith-Schuster finished with three receptions for 44 receiving yards and was able to have a little fun at the expense of Ramsey and his colorful language.

“He said so many cuss words I’ve never heard of before,” Smith-Schuster said, referencing Ramsey’s propensity for trash talk. But Smith-Schuster did give Ramsey props for being very good while noting he was double-teamed a great deal.

In going back and re-watching much of the game it seems Ramsey followed Smith-Schuster in coverage in mainly man scenarios but not always in zone. Ramsey was also called for two defensive pass interference penalties while covering Smith-Schuster on Sunday. Smith-Schuster also noted Ramsey is more locked into a system in Los Angeles compared to his time in Jacksonville, almost implying this was a negative for Ramsey.

Honestly, the best part of Smith-Schuster’s post-game interview is it was clear Ramsey and all his reputation didn’t get in his head. From a statistical standpoint, things haven’t gone according to plan for Smith-Schuster but he remains the ultimate team player.

Don’t expect to ever get Mike Tomlin to talk about the future or the big picture with the Steelers. 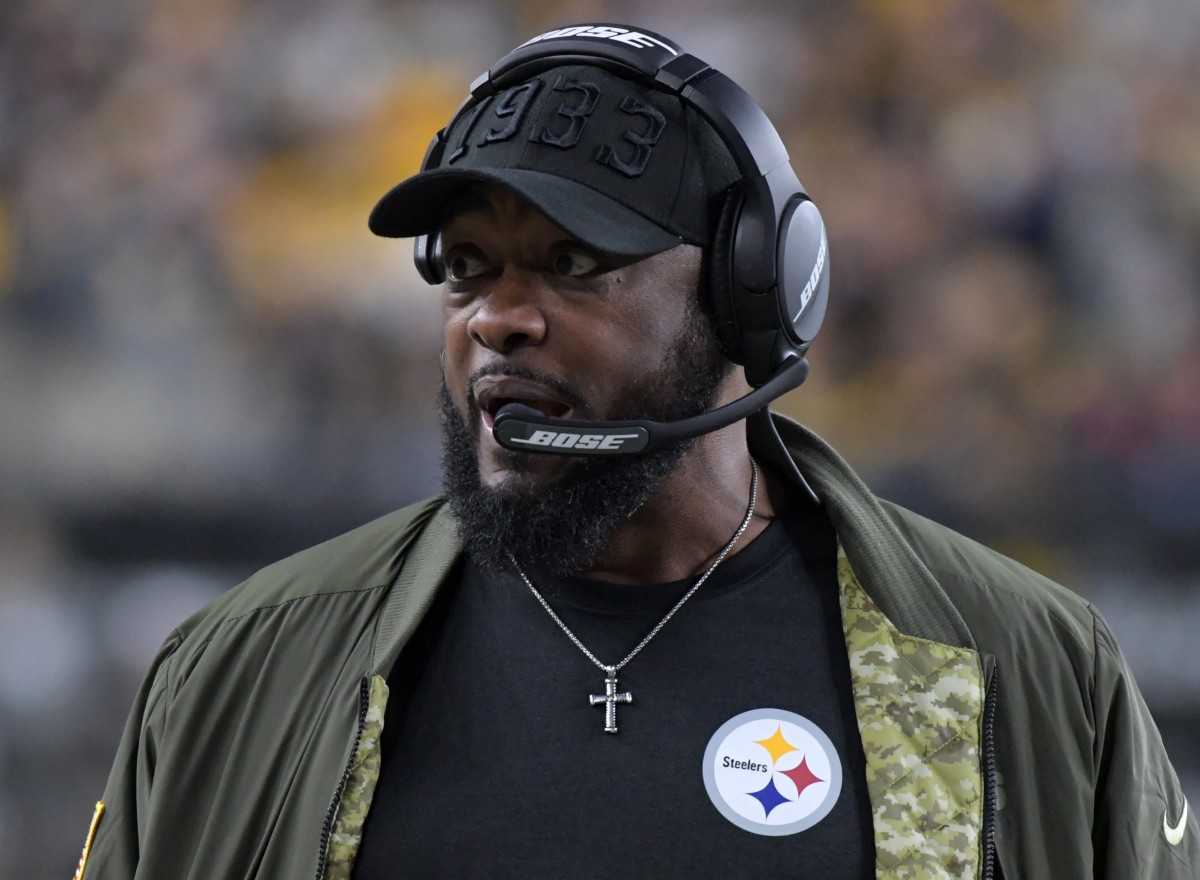 The Pittsburgh Steelers won their fourth straight game on Sunday and find themselves in the thick of the playoff hunt after beating the Los Angeles Rams. But don’t talk to head coach Mike Tomlin about that. Tomlin was his usual all-business self in the postgame press conference almost to a fault.

One reporter asked Tomlin what he was the proudest of as the team has come back from1-4 to win four in a row. Tomlin indicated all he’s proud of is that the team won on Sunday and that they are not a big-picture team.

Tomlin has taken his usual stoic approach to speaking to the media to a whole new level this season. If you didn’t listen to his words and only his tone you’d have a hard time distinguishing between wins and losses.

Pittsburgh has no time to sit back and enjoy this win. After three home games the Steelers must now hit the road and head to Cleveland and take on the Browns on Thursday night.

The Steelers have allowed a safety in two straight games. 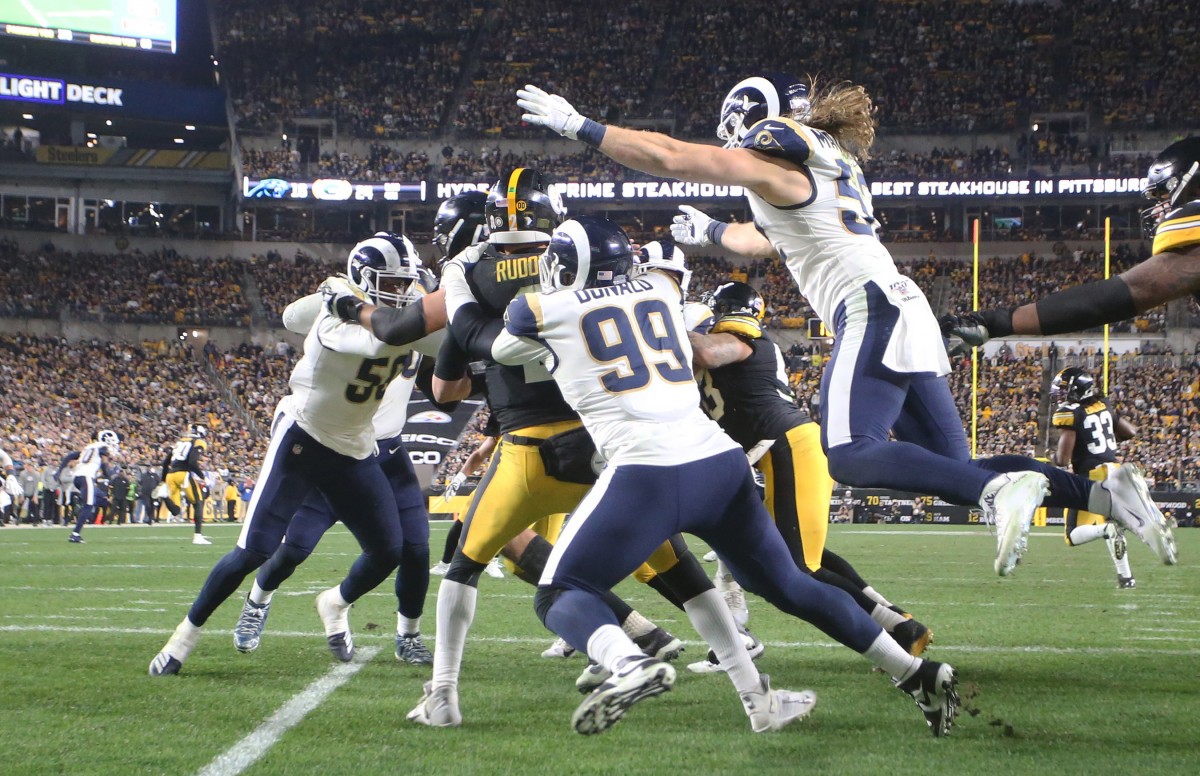 Mike Tomlin admits he called the play inside the 5 that resulted in a safety. Randy Fichtner took A LOT of Twitter heat for that.

For the second week in a row, the Pittsburgh Steelers gave up a safety. Last week against the Indianapolis Colts the blame for the safety fell squarely on the shoulders of quarterback Mason Rudolph. But this week against the Los Angeles Rams, it really felt like the play call was wrong in that situation.

And as we all know, when it comes to offensive playcalling, it is offensive coordinator Randy Fichtner who bears the brunt of the hate from fans. But head coach Mike Tomlin, in his postgame press conference, make it clear this call was on him, not on Fichtner.

As unfortunate as the outcome was, it’s hard to get too down about the call regardless of who it was. The Steelers continue to scramble to try to manufacture offense, especially in the passing game. I have to believe if James Conner had been in the lineup, this scenario goes very differently.

Vote for this week’s player of the game. 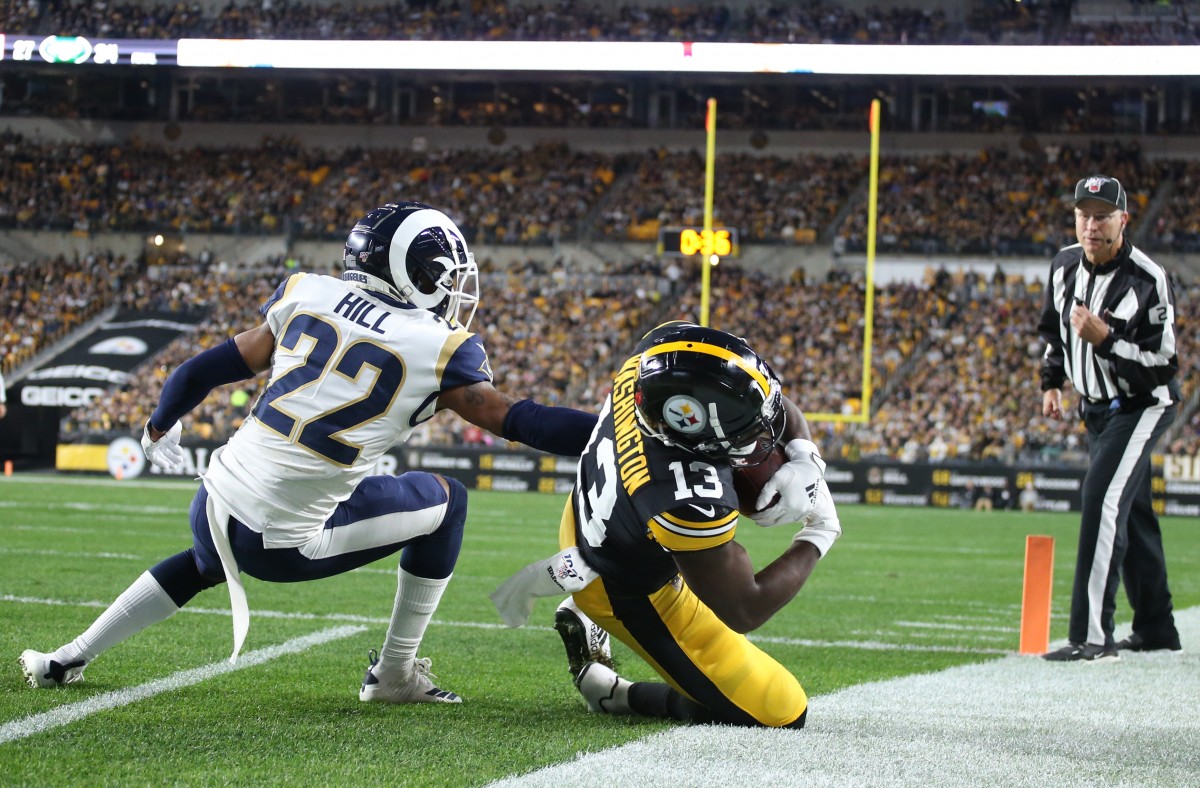 Oh boy, this one is going to be a good one.

Despite long odds, the Pittsburgh Steelers have found a way to win their fourth game in a row. This time it was the Los Angeles Rams and once again it was the defense that carried the day. But which player deserves the player of the game honors? Well, that’s up to all of you.

Here’s the rundown of the candidates

Cast your vote and let us know who your player of the week is. These four might be the strongest group of candidates we’ve had all season.