The best reactions from Chiefs vs. Bengals in Week 13. 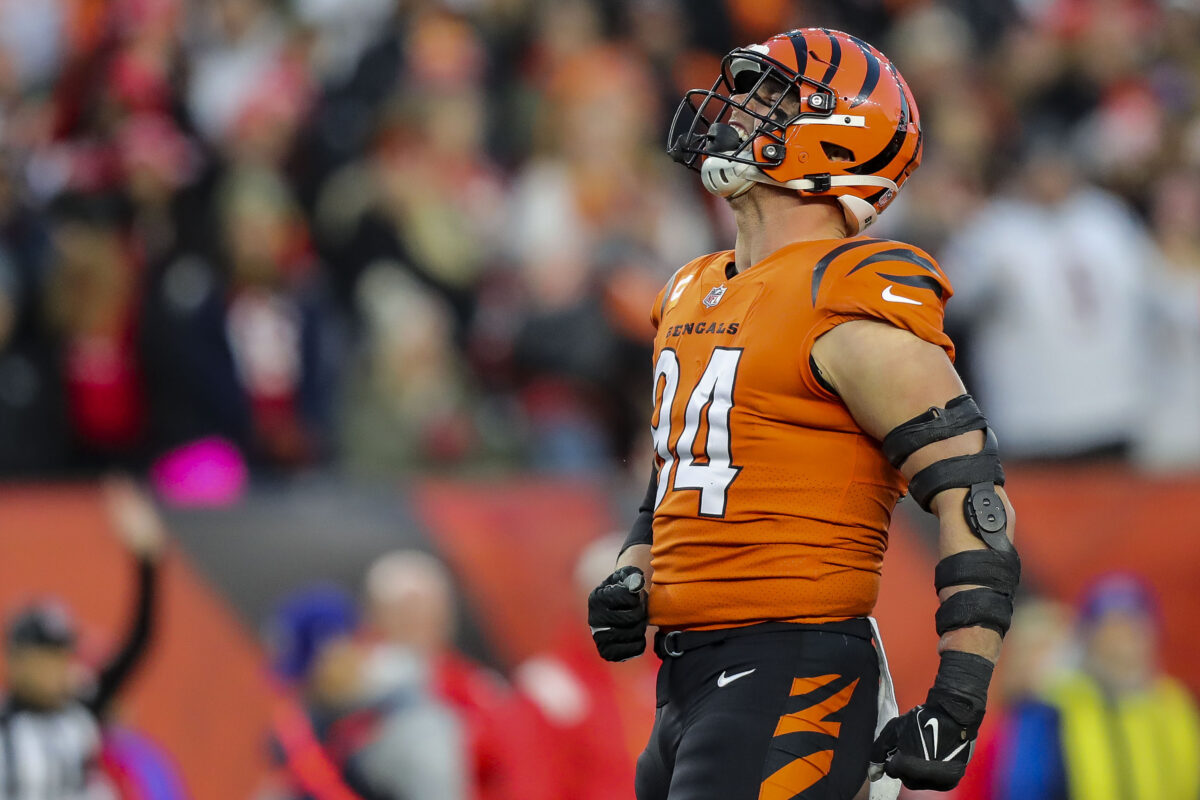 Given the freshness and viciousness of the budding rivalry, reactions tend to flow when the Cincinnati Bengals and Kansas City Chiefs get together.

This game featured some personal fouls and taunting penalties and even a fake injury after the week leading up to the game featured plenty of trash talk from both sides.

Like last year, there’s a feeling exiting the game that the two teams could always see each other again later. But for now, we’ll have to settle for looking at some of the best reactions from the game.

Instant analysis after Chiefs vs. Bengals in Week 13. 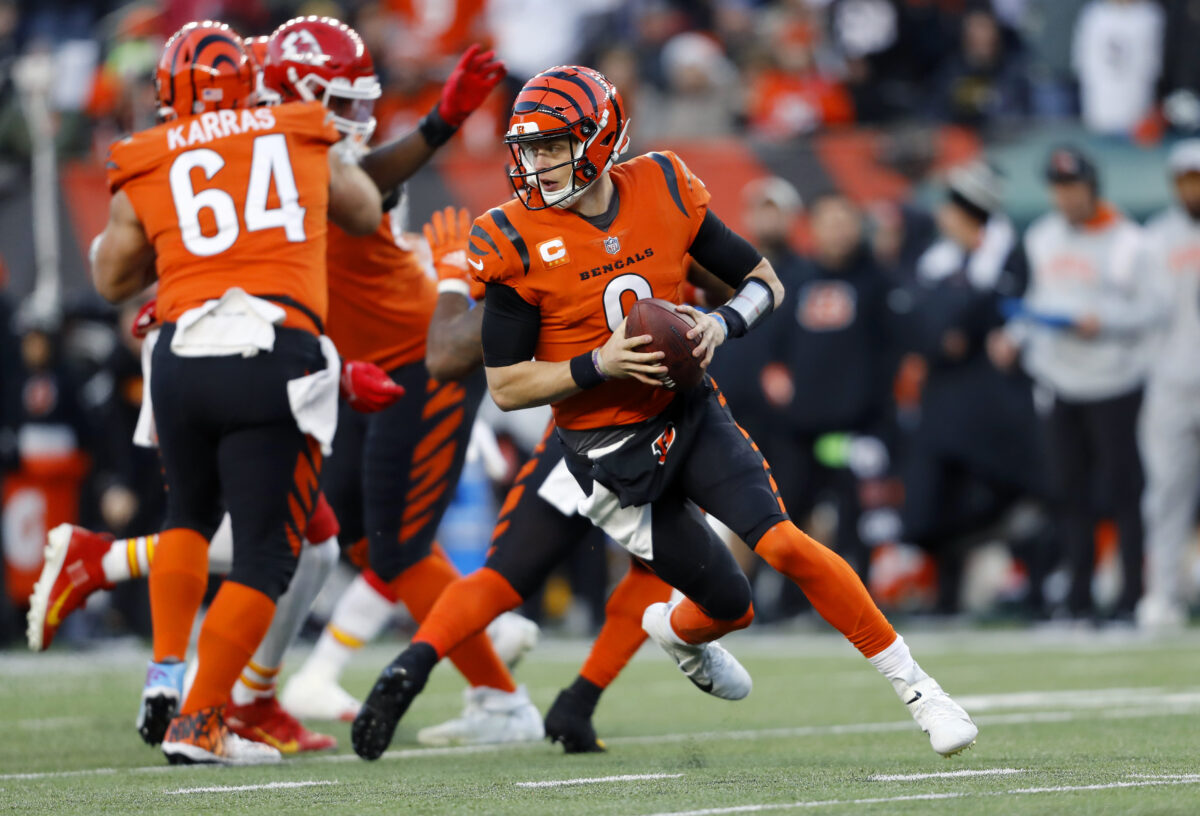 The Cincinnati Bengals came firing out of the gates against the Kansas City Chiefs in Week 13 and ultimately won, 27-24.

Cincinnati got the scoring started first but quickly fell into a habit of big mistakes that kept this one close.

Along the way, Joe Burrow and the Bengals offense looked good with Ja’Marr Chase back in the fold despite the absence of Joe Mixon. But it’s the minor mistakes coaches and fans will fixate on in the aftermath regardless of result.

Here’s a look at some quick hits and takeaways right after the game went final.

— Bengals did absolutely whatever they wanted on the first drive of the game. Samaje Perine ran well and Burrow peppered a variety of targets on their way down the field before the quarterback himself punched it in for the score. A far, far cry from how the two games against the Chiefs looked early.

— Defense got gashed a bit on the Chiefs’ first drive, especially as the Chiefs exploited the weakness to screens it showed last week against the Titans. But the unit held, making it 7-3, and every little stop like that matters greatly.

— Ja’Marr Chase’s hip, based on a few highlight plays in the first half, is just fine. His taunting penalty after a teammate’s touchdown while getting in the face of Justin Reid was incredibly silly, though.

— DJ Reader provided proof after proof of his dominance in the first half.

— Jessie Bates seemed to fake an injury to avoid a penalty.

— Hayden Hurst left with an injury.

— Samaje Perine dribbled Justin Reid off the turf with a nasty stiff arm.

— Bengals had a chance to score before halftime. On fourth down, Burrow had the option to quarterback sneak or run the end-around. Old friend Carlos Dunlap blew up the latter in about half a second, which is a critical point the Bengals will look back on regardless of result.

— Defense coughed up a seven-play drive over 77 yards for a Chiefs touchdown to start the second half.

— The worst drop of Tyler Boyd’s career came on a surefire touchdown. Instead, the Bengals had to settle for a 17-all tie.

— Germaine Pratt had potentially the play of the game with the strip fumble on Travis Kelce in a four-point game in the final quarter.

— Offense capitalized with one of the best drives of the year, carried by Perine and Chris Evans, who scored the go-ahead touchdown.

— Burrow, with the game on the line on third down, casually flips a ball 11 yards upfield to Tee Higgins in traffic to ice it. Unbelievable.

3 of 6: Bengals’ tally on trips inside the 20-yard line on Sunday against the league’s 32nd-ranked redzone defense. For all the flashy stats the offense put up, being unable to punch it in for touchdowns made their mistakes even harder to overcome.

QB Joe Burrow: How gutty is Burrow? Yes, the 286 passing yards with two scores is nice. But he was constantly taking off and putting his body on the line when nothing was there, moving the chains while picking up 46 yards and a score as a rusher.

RB Samaje Perine: Play after play after play. Perine wound up with 21 carries for 106 yards and six catches for 49 yards. But it’s the gritty shoulder-lowering stuff and tough conversions that really stick out.

DL DJ Reader: We could point to flashier guys and numbers. But it was Reader commanding multiple blockers and shifting entire lines all day, including huge redzone stops. He might be the league’s best nose tackle.

A.J. Brown had a lot to say about the Titans following the Eagles’ Week 13 victory. 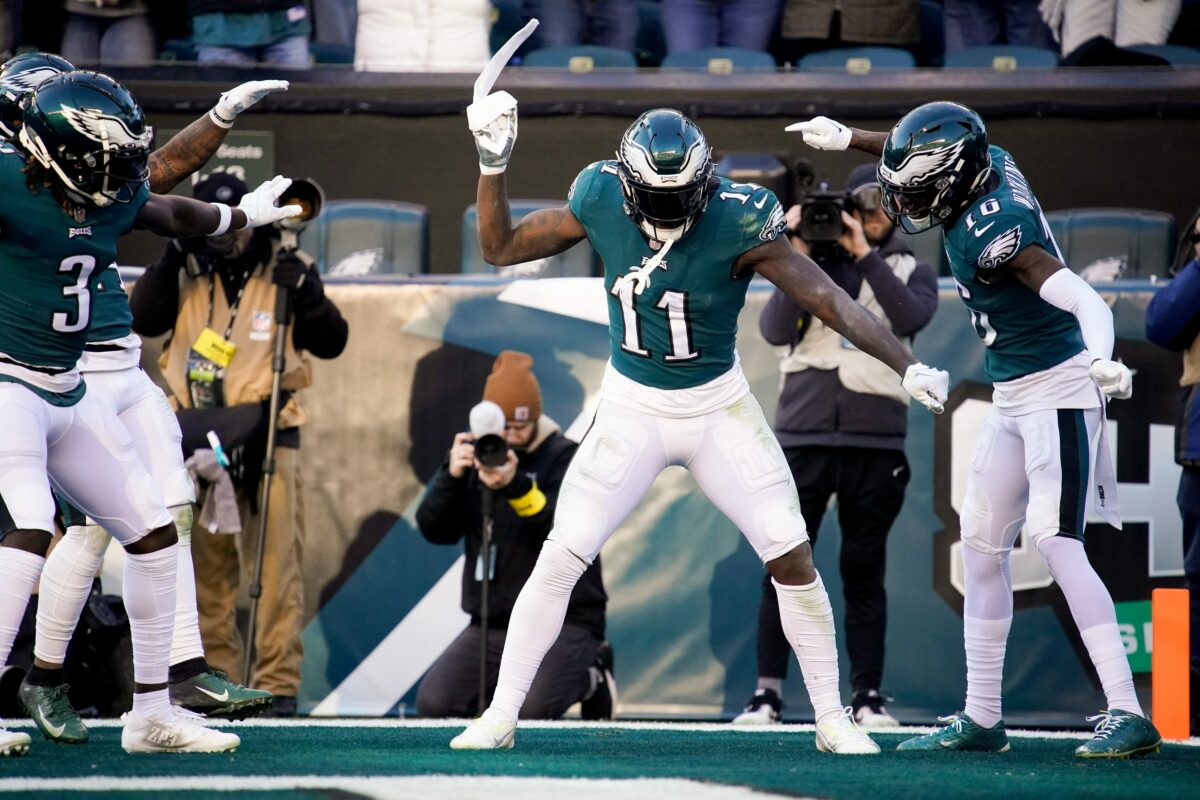 Wide receiver A.J. Brown reminded the Tennessee Titans exactly what they traded away after torching his former team during a blowout victory for the Philadelphia Eagles in Week 13.

Brown led the way for Philly with eight catches for 119 yards and two scores, which only made the Titans’ loss to the Eagles even tougher to stomach.

After the game, Brown admitted he had this game circled on his calendar and he wanted to make the Titans regret trading him. He also noted that it was personal for him and reiterated how he wanted to stay in Tennessee.

“This one meant a lot to me… I’d be lying to you to say I didn’t circle this game,” Brown said. “I wanted to make them regret that decision.”

“To be honest, it’s been personal since the trade,” Brown added. “I’ve been trying to keep it down. I stated that’s where I wanted to be.”

Prior to Brown scoring his first touchdown of the game, the Eagles wide receiver had a 40-yard touchdown called back because he stepped out of bounds on the reception.

But before the play was reversed, Brown ran up to the padding on the goal post, pulled out his towel and began whipping it before giving it a hug to celebrate. He explained the meaning behind the celebration afterwards.

“Today I’m going to have to give you a whooping, but I still love you, though” Brown said with a laugh. “That’s where the hug came in at the end.”

This game was the absolute worst scenario for the Titans. They got beat down bad by the Eagles, and Brown had a big part in it.

Justin Reid did the talking before the game, Samaje Perine responded on the field. 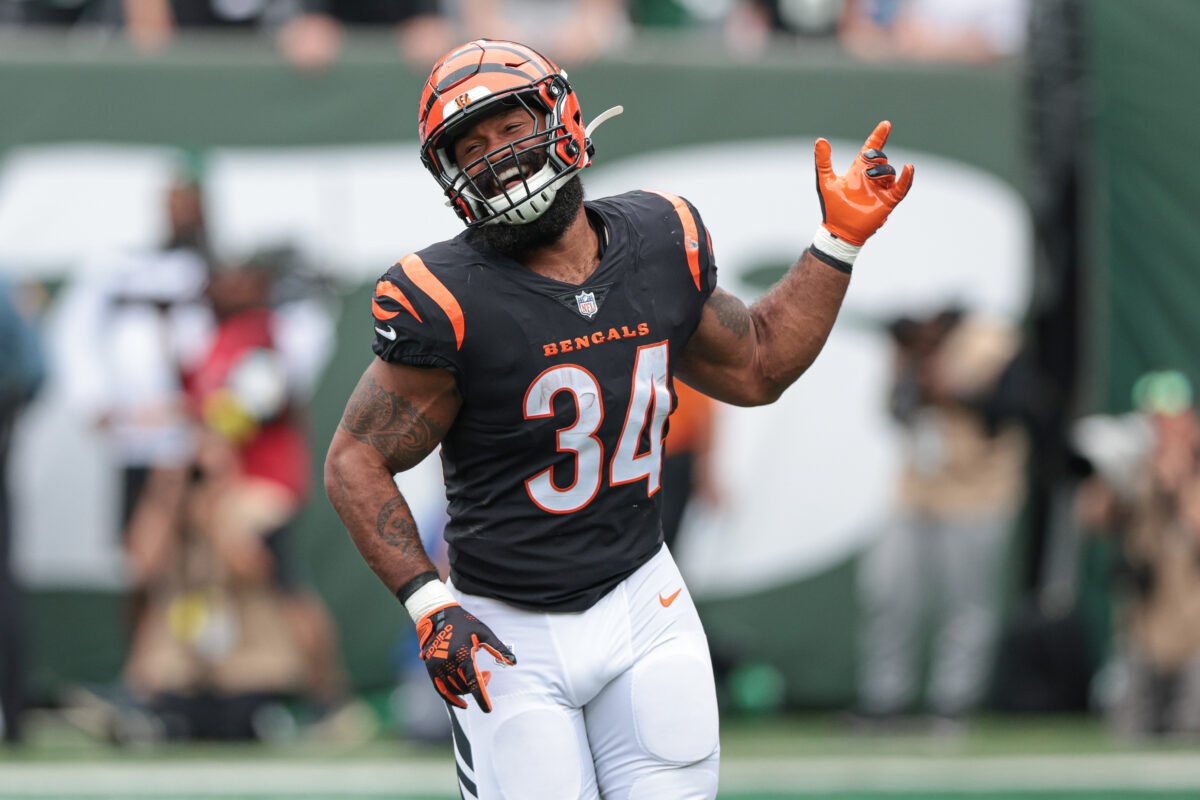 Cincinnati Bengals running back Samaje Perine went viral a week ago for stiff-arming a defender in one of the meanest moves we’ve seen all season.

Perine did it again on Sunday against the Kansas City Chiefs.

And it wasn’t just any Chiefs defender, either. Perine’s victim was defensive back Justin Reid, who talked some trash about the Bengals before the game this week, then talked some more.

In fact, Ja’Marr Chase got called for a taunting penalty after a touchdown for getting in Reid’s face, an on-field reply (and one the coaches hated, too) of sorts to Reid.

Perine let his bullying style do the talking instead: 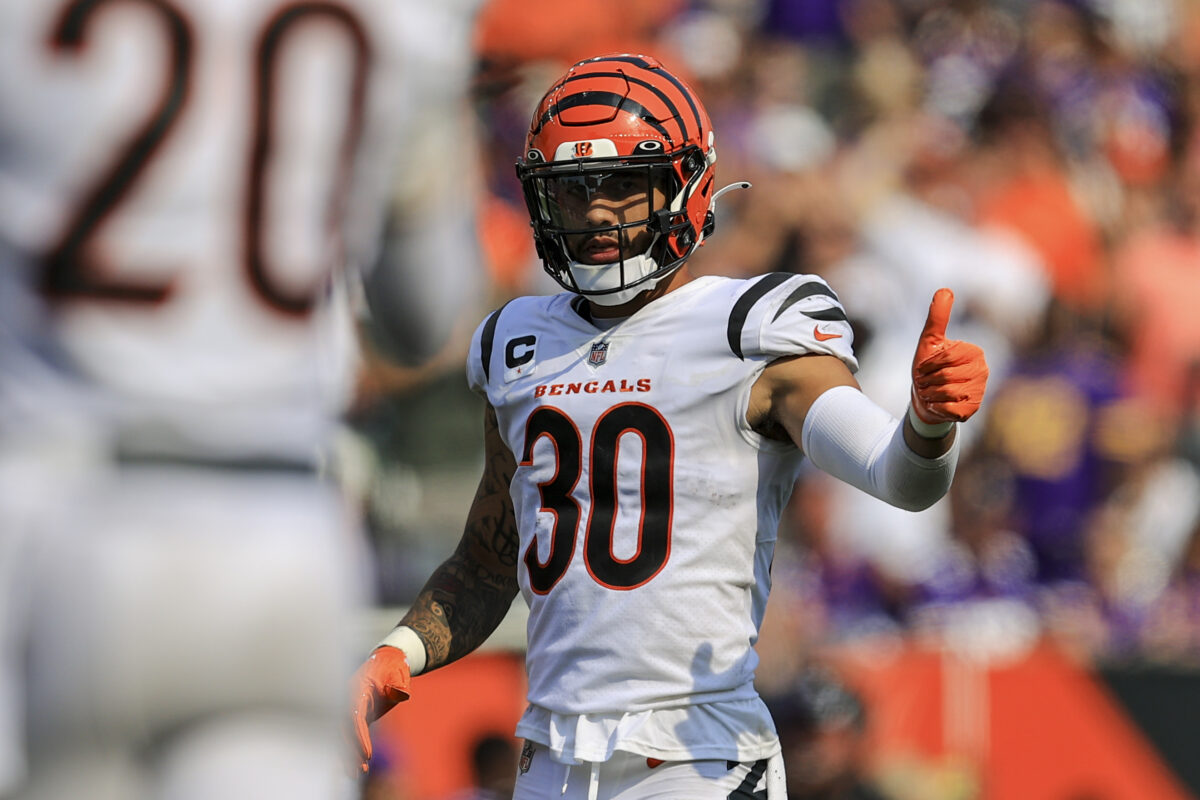 Cincinnati Bengals safety Jessie Bates helped out his team in a creative way during Sunday’s showdown with the Kansas City Chiefs.

In the second quarter with the Chiefs at the goal line and getting ready to line up, Bates clutched his leg and went down in a heap.

Upon reviewing the replay, it sure seems like Bates suffered the setback after realizing his defense’s substitutions were late getting on the field. That could have resulted in a flag, a lost timeout or even the Chiefs just catching them off guard.

The Chiefs wound up scoring anyway, but rest assured the…interesting injury to Bates went viral with the quickness.

Some of the reactions:

Hayden Hurst was quickly declared out by the Bengals. 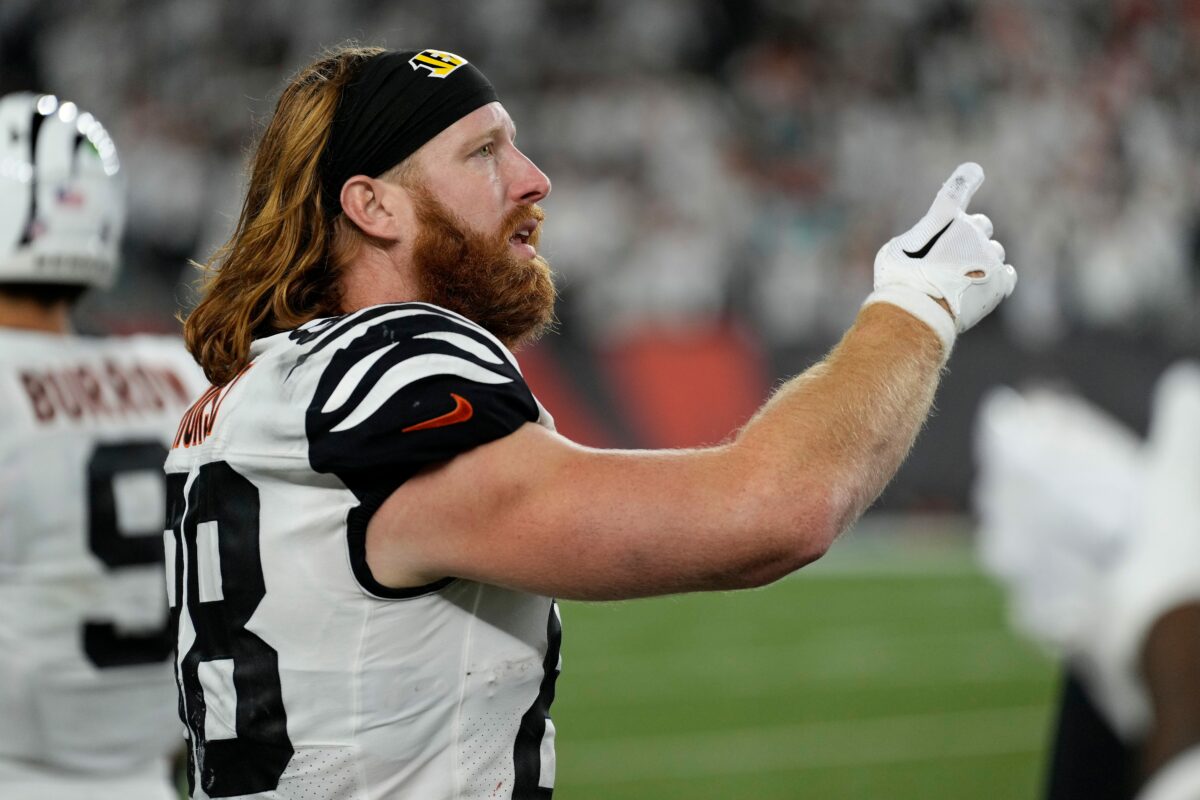 The Cincinnati Bengals lost starting tight end Hayden Hurst to a calf injury in the first half of their Week 13 tilt with the Kansas City Chiefs.

Hurst, who had been involved in some of the trash talk unwittingly this week before the game, suffered the injury and was seen on the sidelines working with trainers before the team made the declaration.

In the short term, the Bengals will rely on Mitchell Wilcox and other depth options.

If Hurst has to miss more time beyond Week 13, former second-round pick Drew Sample remains on injured reserve. The Bengals would then have to turn to a practice squad callup such as Nick Bowers or look outside the team for help.

Check out what the Titans had to say about their embarrassing 35-10 loss to the Eagles in Week 13. 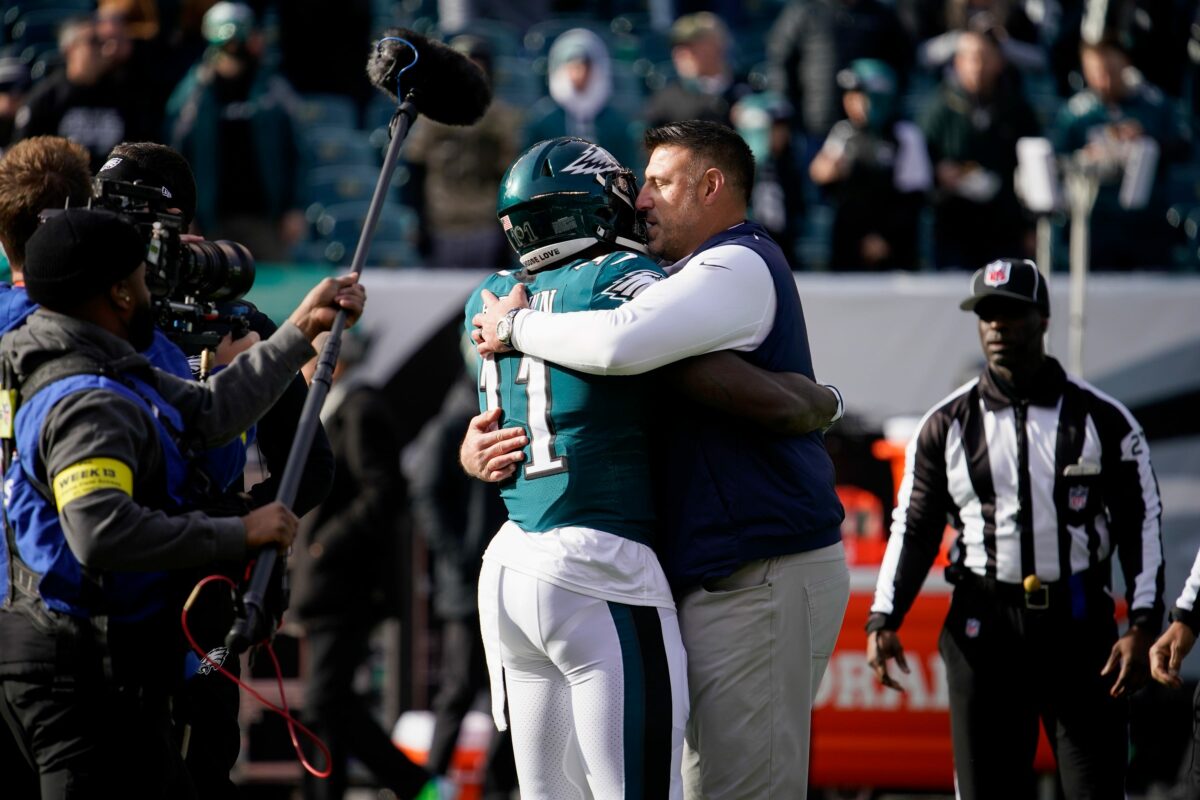 The Tennessee Titans were 100 percent outclassed by the Philadelphia Eagles in all phases of the game in Week 13, losing in blowout fashion at Lincoln Financial Field, 35-10.

Making this loss even harder to stomach was the fact that former Titan and current Eagles wide receiver A.J. Brown shined with game-highs in receptions (eight) and receiving yards (119), and he had two scores.

With the loss, the Titans fall to 7-5 and allow the Indianapolis Colts a chance to inch closer in the division. Tennessee is now 1-4 against teams with a winning record this season, which doesn’t instill much confidence for a playoff run.

Here’s a look at what head coach Mike Vrabel and Titans players had to say about several topics following the loss.

Titans head coach Mike Vrabel provided a brief update on Treylon Burks after the loss to the Eagles. 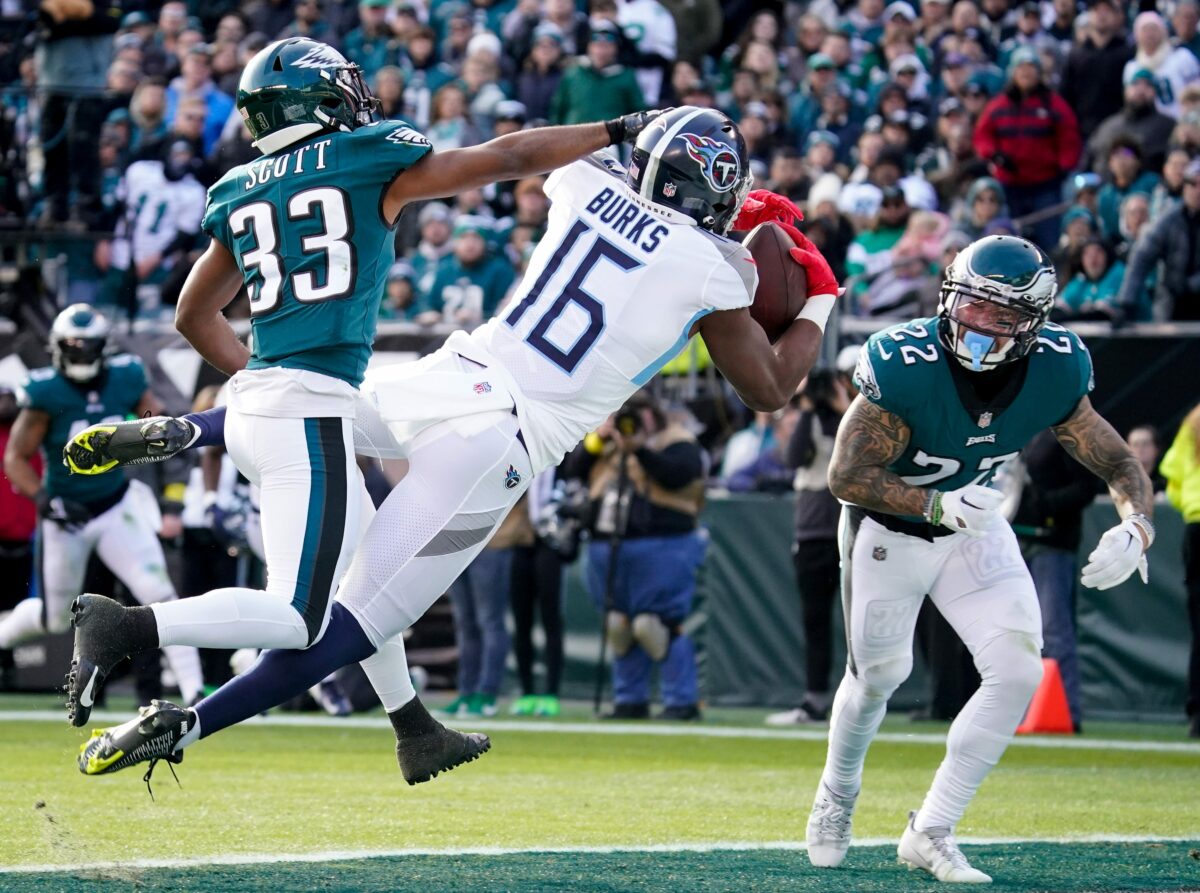 Tennessee Titans wide receiver Treylon Burks recorded his first career touchdown catch in the Week 13 loss to the Philadelphia Eagles, but it proved to be his final play of the game.

In the process of making the catch, Burks was sandwiched in between two defenders but was still able to come up with the reception. Unfortunately, an illegal hit to the head from Marcus Epps ended Burks’ day.

The rookie wideout was down on the field following the hit but was able to walk off under his own power. He was evaluated for a concussion and later ruled out.

Holding on through the hit 💪 @TreylonBurks

After the game, Titans head coach Mike Vrabel provided a bit of an update, noting that Burks appeared to be doing OK when he spoke to him after.

“I think he’s doing OK from what I’ve seen. I was able to see him at halftime and talk to him after the game,” Vrabel said. “We expect that [touchdown catch] from Treylon because I know what he’s capable of. It’s unfortunate he wasn’t able to finish the game.”

The loss was a big one for Tennessee’s passing attack, which struggled mightily the rest of the way without its best weapon.

We’ll certainly be monitoring Burks’ status throughout the week in the lead up to the game against the Jacksonville Jaguars, but more importantly we hope he’s OK. 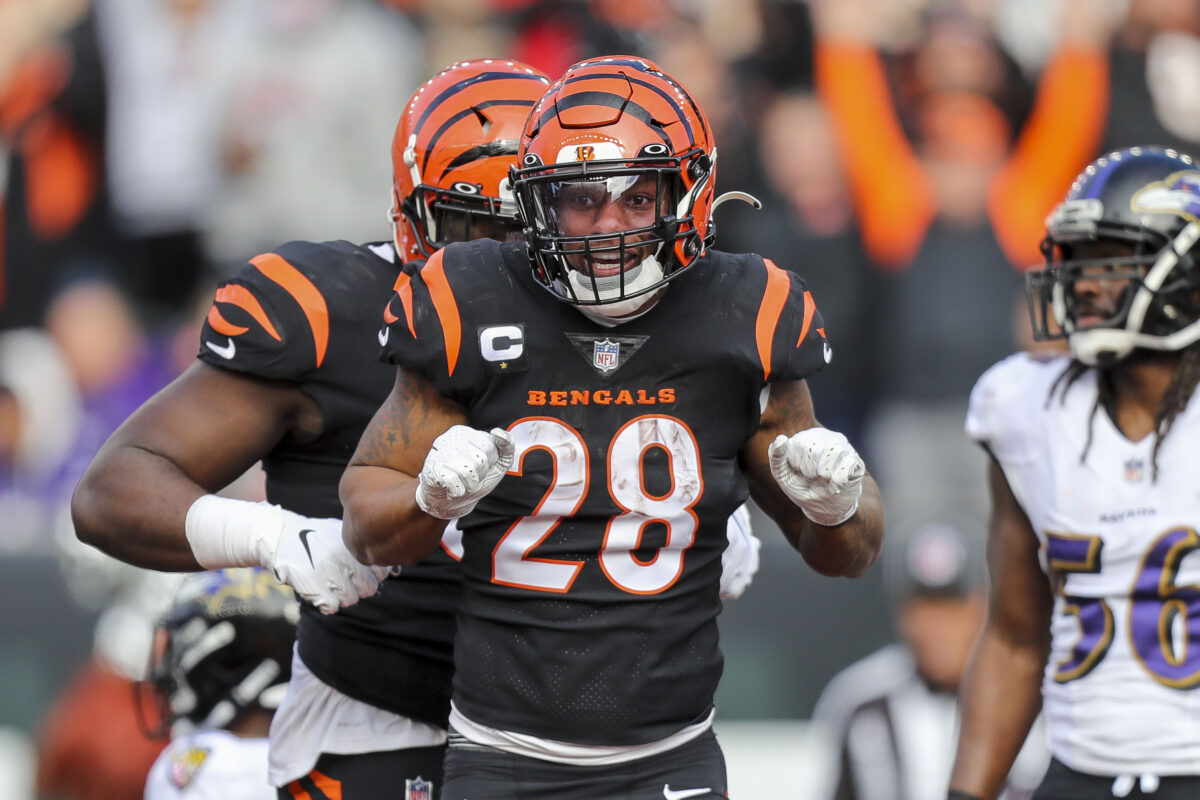 The Cincinnati Bengals get star wide receiver Ja’Marr Chase back against the Kansas City Chiefs on Sunday but won’t have starting running back Joe Mixon.

While Chase is finally all the way back from his hip injury, Mixon remains in concussion protocol and will miss his second consecutive game.

The Bengals issued the following inactives list for Sunday’s game:

Besides Mixon, there aren’t any major shockers on the list. Samaje Perine will once again get the start and look to keep things rolling for the offense on the ground.

Here are our inactives for today's game against the Bengals: 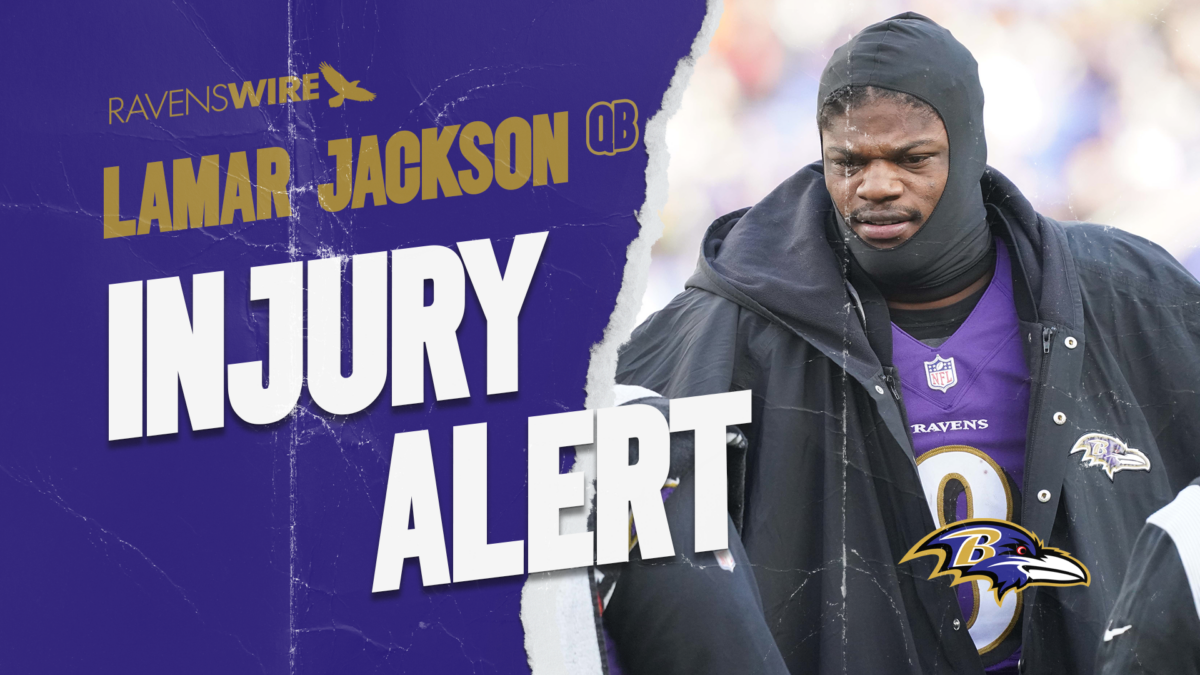 The Baltimore Ravens matched up with the Denver Broncos in Week 13 of the 2022 season. The game started with Baltimore quarterback Lamar Jackson facing off against Denver quarterback Russell Wilson, but Jackson left with an injury early in the contest and never returned.

Jackson went down after taking a sack at the end of the first quarter, and didn’t return to start the second quarter. He was seen gingerly walking to the locker room, and was deemed questionable to return with a knee injury. However, he was later ruled out for the remainder of the contest.

QB Lamar Jackson (knee) has been ruled out for the rest of the game.