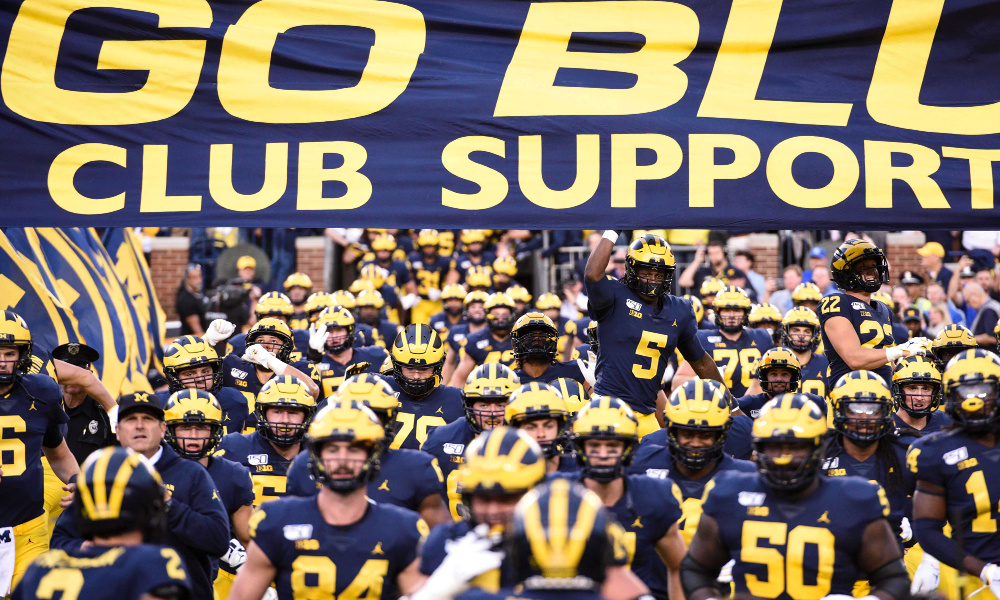 Big Ten college football predictions, schedule, game previews, lines, how to watch, and TV listings for Week 13 of the season.

Illinois vs. Northwestern prediction, game preview, how to watch, lines, and why each team might – or might not – win this Saturday. 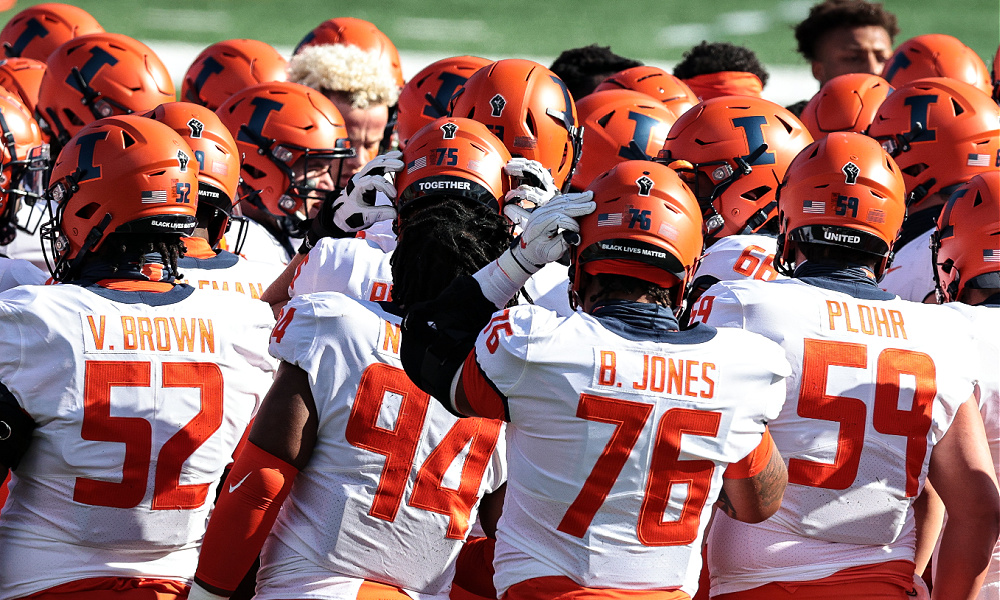 Illinois vs. Northwestern How To Watch

The Northwestern offense has a whole lot of problems, but that’s okay – Illinois doesn’t really score.

The Illini got 23 in the loss to Iowa last week, and that was a stretch. This is a grinding team that wants to keep the score around 17-14, and that fits the Wildcats just fine.

Northwestern will be slow and go, and as long as it can stay conservative and not force anything with the passing game, this will be close in the fourth quarter. The game will never get away from the offense.

Northwestern just doesn’t score. At all.

It hasn’t pushed past 14 points in any of the last five games and isn’t going to get into the 20s unless something crazy happens.

Illinois isn’t going to do anything wacky, mainly because it’s not able to. Run, run, and run some more on a Wildcat defensive front that allowed 260 yards or more in three of four games before getting a Purdue team that threw for a bazillion yards.

Keep it conservative, own the ground game, win the turnover battle. Illinois can do that, and …

There’s still a distant outside chance that Illinois can go bowling at 5-7 if a whole lot of bowl slots are open and the games need someone based on the Academic Progress Rate. For now, just beating Northwestern would be a big deal for the program.

Don’t expect any fireworks. The game will go by in a snap as both teams keep the clock moving, but Illinois will be +2 in turnover margin and get just a little more going with its ground game.

5: The Times and Life of Shawn Carter: Official Video of JAY-Z’s 2021 Rock Hall Induction
1: “Why don’t we have Thanksgiving food the rest of the year?” 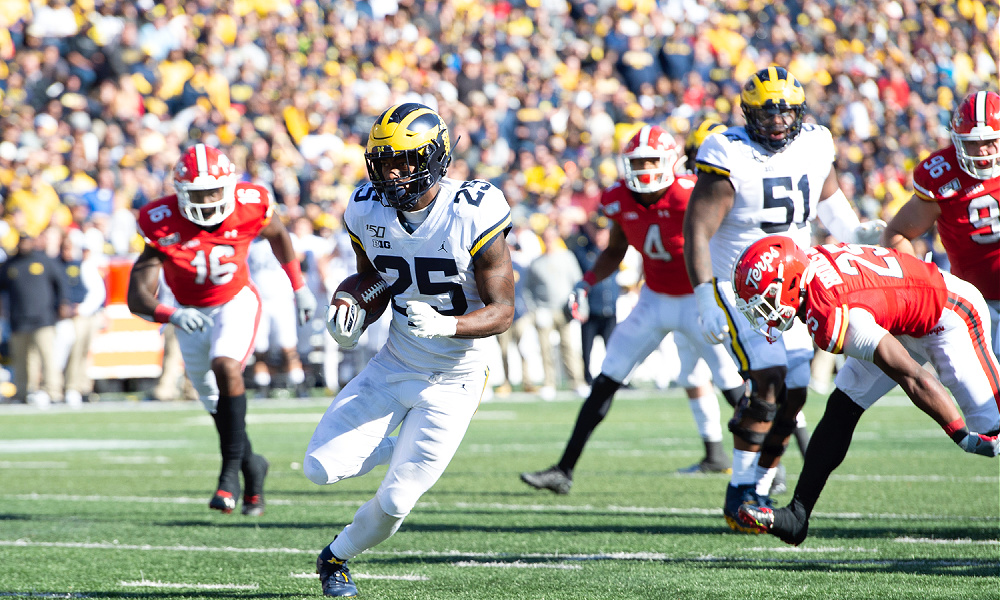 Big Ten college football predictions, schedule, game previews, lines, how to watch, and TV listings for Week 11 of the season.

Purdue vs Northwestern (in Wrigley Field)

Purdue vs Northwestern prediction, game preview, how to watch, lines, and why each team might – or might not – win this Saturday. 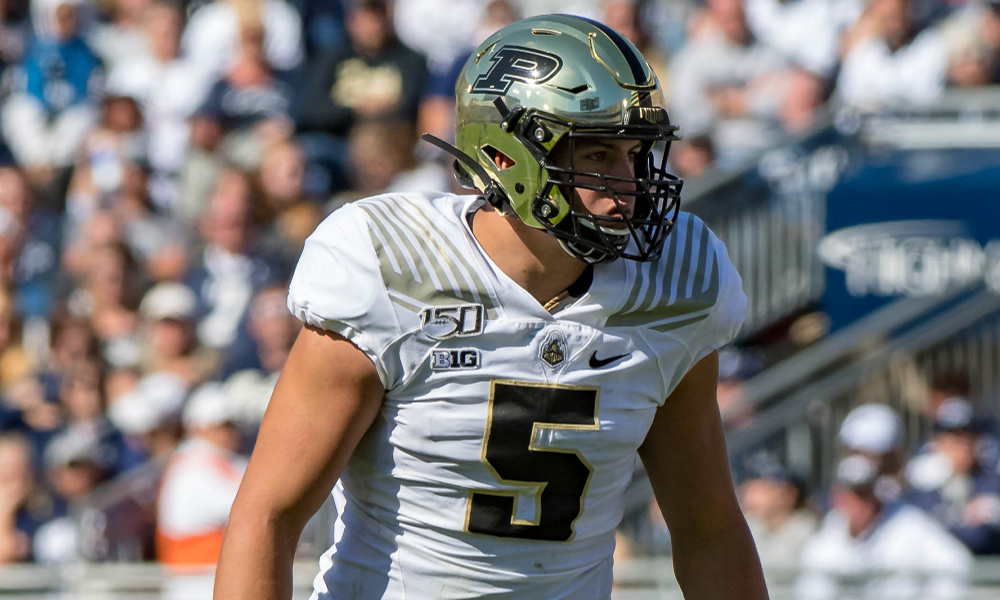 Purdue vs Northwestern How To Watch

Why Purdue Will Win

The defense is far, far better than it showed against Ohio State.

The Buckeyes have the No. 1 offense in college football in both scoring and yards – they’re doing that against everyone. Purdue still cranked up yards and points in the second half to at least get in some good exercise.

Score just a little bit against Northwestern and it’s over.

The Wildcats are struggling on offense, but the defense is just as big an issue. Purdue doesn’t really run, but it should be able to do it without a problem, and the midrange passing attack should go off.

It’s got the worst running game in the Big Ten – that’s because it throws – and it doesn’t normally bomb away. It comes up with a ton of yards, but it’s all midrange throws – Northwestern’s defense should be able to handle that a wee bit.

As much as the Wildcats are struggling, that’s partly because they’ve faced Wisconsin, Iowa, Minnesota, and Michigan over the last month. Purdue has a defense, but the Northwestern passing game is just good enough to keep things moving and control the tempo of the game.

It’s like a bowl game for Northwestern. It’s actually more like a staycation for the 3-7 Wildcats, making the trip down the road to play in Wrigley Field for a quirky game that might be just the type of strange setting to throw Purdue off a tad.

The Boilermaker offense should be able to keep the offense going well enough – it’s been over 200 passing yards in every game – to make Northwestern press.

Northwestern needs Purdue to implode, and that’s not going to happen. 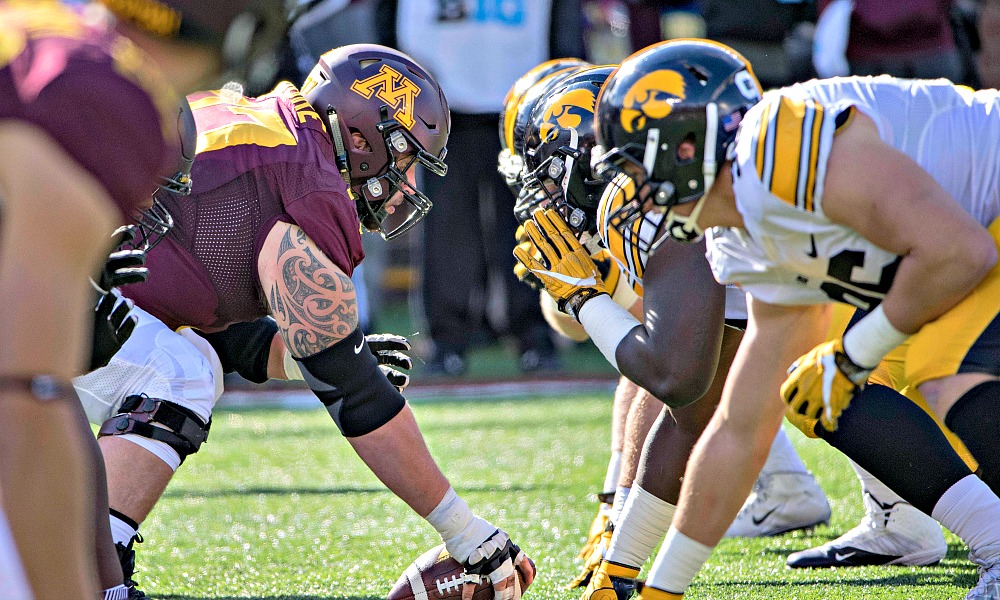 Big Ten college football predictions, schedule, game previews, lines, how to watch, and TV listings for Week 11 of the season.

Wisconsin vs Northwestern prediction, game preview, how to watch, lines, and why each team might – or might not – win this Saturday. 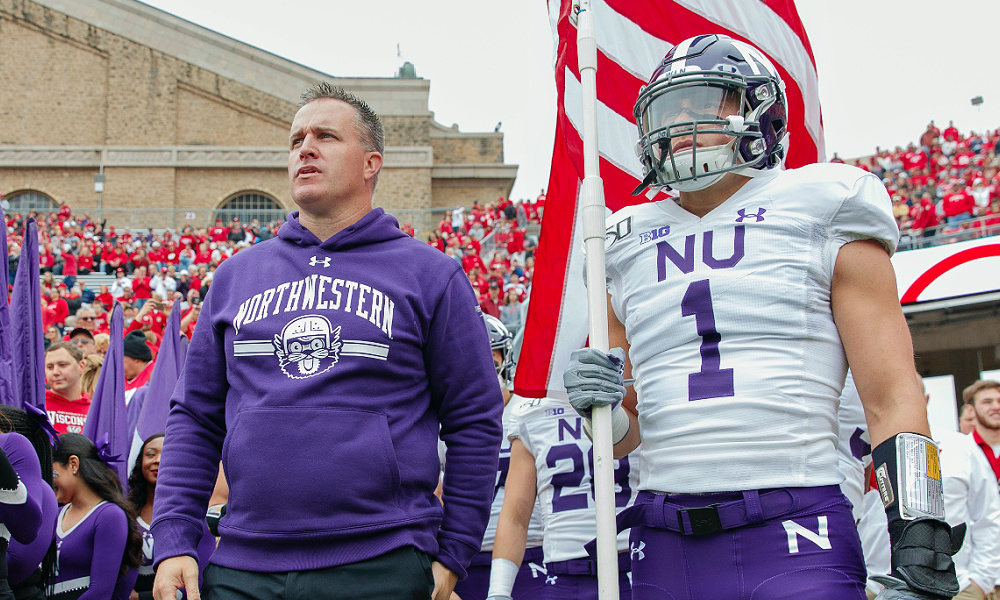 Wisconsin vs Northwestern How To Watch

Despite being outplayed overall, the 2020 Northwestern Wildcats came up with five takeaways in the 17-7 win over the Badgers.

The 2014 Northwestern team took the ball away from Wisconsin four times and the 2013 team came up with three turnovers.

That means in the last eight games between these two, Northwestern has forced 25 takeaways against Wisconsin.

Let’s just say Pat Fitzgerald and his team have figured something out.

The Badgers have chilled on the giveaways after turning it over 17 times in the fist seven games this year, but it’s Wisconsin, it’s Northwestern …

Why Wisconsin Will Win

Wisconsin always has a strong defense, but this one is at another level.

Yeah, yeah, yeah, Georgia’s D is historically awesome, but it’s giving up 230 yards per game. Oklahoma State has the third-best defense in college football and it’s allowing 277 yards per game.

2011 Alabama ended up allowing just 184 yards per game in a modern-era all-time great season. No one else since then has finished a season allowing fewer than 250.

No one is running against the Badgers, including Army – Wisconsin allowed a season-most 179 yards against the run-only attack.

The Badgers are No. 1 in the nation in total defense, run defense, third down defense, and they’re fourth in scoring D – which isn’t really fair because the meltdown in the 41-13 loss to Notre Dame was on the offense and special teams – and fifth in pass defense.

Northwestern can’t consistently move the ball until it’s too late, the running game isn’t going anywhere, and worst of all, the run defense is the worst in the Big Ten just as the Badger O line and ground attack has found a groove.

That’s it. That’s everything.

However, in this, Wisconsin is going to pound away too much and too well. Meanwhile, the Badger D that’s playing at a whole other level is doing its part with 12 takeaways in the last three games.

This matchup always defies all logic and reason, but assuming the Badgers keep the turnovers to under a gajillion … 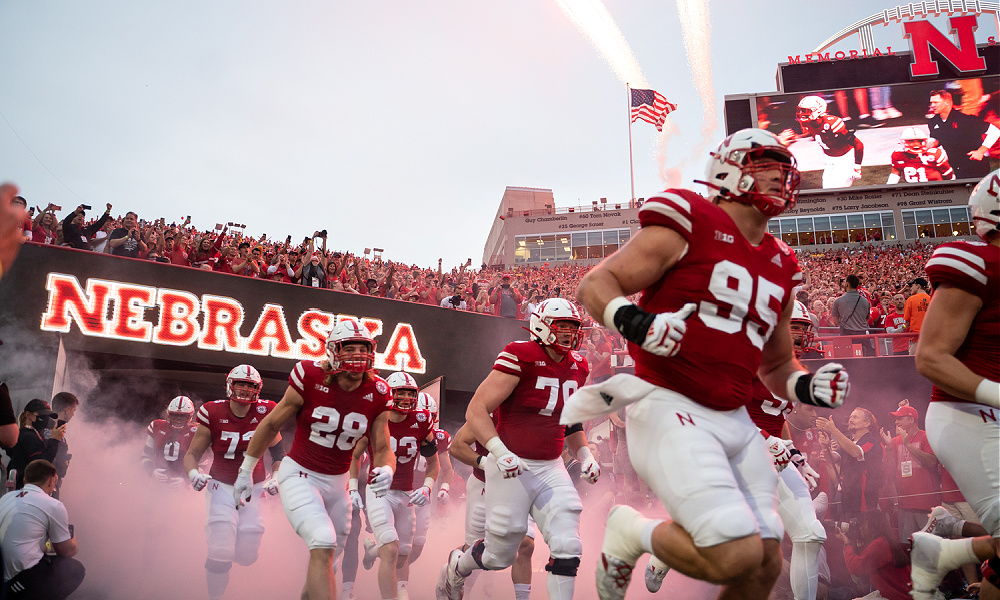 Big Ten college football predictions, schedule, game previews, lines, how to watch, and TV listings for Week 10 of the season. 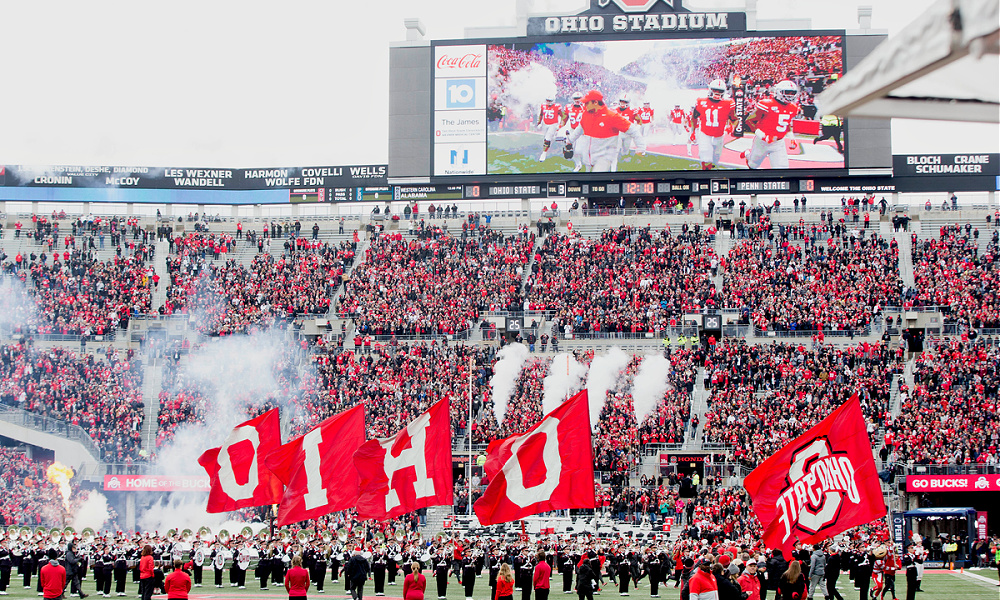 Big Ten college football predictions, schedule, game previews, lines, how to watch, and TV listings for Week 9 of the season.

Big Ten college football predictions, schedule, game previews, lines, how to watch, and TV listings for Week 8 of the season. 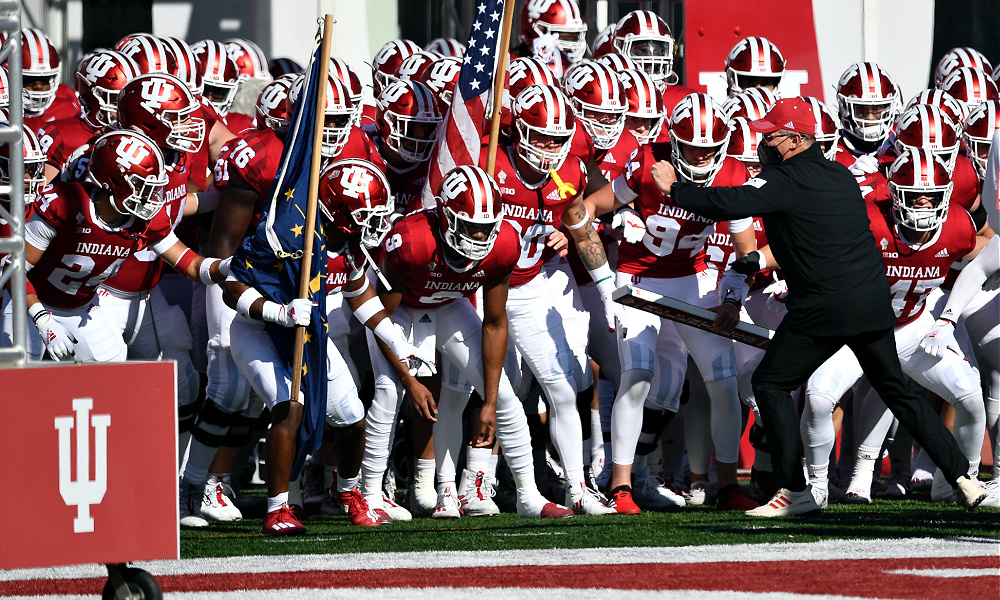 Big Ten college football predictions, schedule, game previews, lines, how to watch, and TV listings for Week 8 of the season. 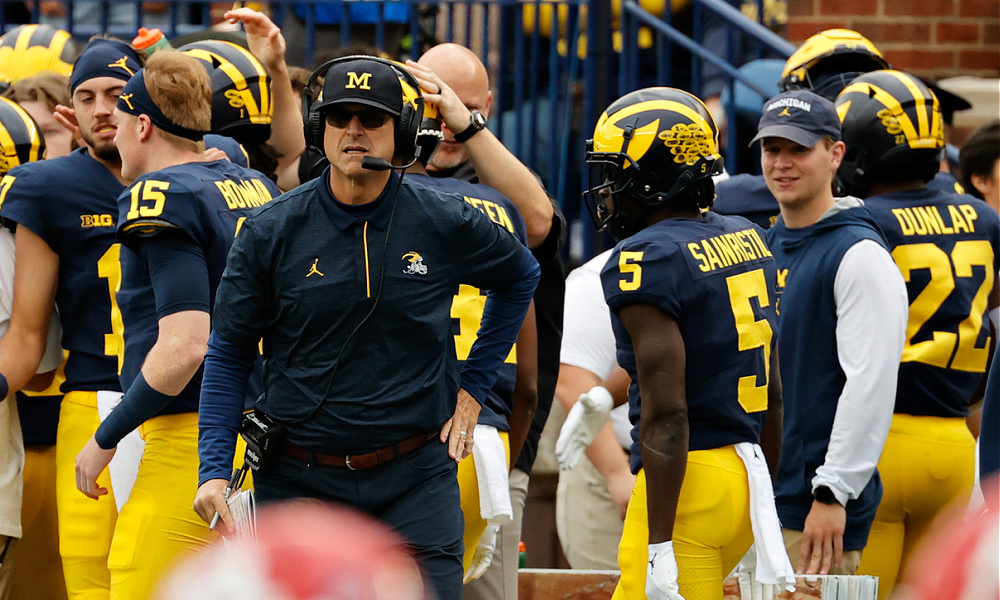 Michigan vs Northwestern How To Watch

The offense showed up in the 21-7 win over Rutgers and wasn’t bad, but it was the pis of the defense in one of its best performances of the year that might have been the pivot needed after the disaster against Nebraska two weeks earlier.

It was the first halfway decent win of the year – and pump the brakes on this next stat considering the other two victories were against Indiana State and Ohio – but Northwestern is 3-0 when allowing fewer than 200 rushing yards, and 0-3 when allowing more.

The run D has to be great, and QB Ryan Hilinski has to keep playing well. The former South Carolina Gamecock has thrown for over 260 yards in each of the last two games and three touchdowns with no picks, but …

The Wolverines struggled through the win at Nebraska, but it was looking and playing like a team that could’ve used a week off, and they got it.

Even though it was a fight against the Huskers, the running game still rolled for over 200 yards. Forget about running against Wisconsin – Michigan didn’t, and it still won – and the Rutgers run D is hit-or-miss good.

Against Northwestern, the formula is simple. Don’t turn the ball over and give up easy points – Michigan leads the nation in fewest turnovers with two – run well enough to control the tempo, and don’t worry about a Northwestern offense that isn’t going to hang 50 on the board if you do the first two parts correctly.

Michigan will run well from the start at home, but it’ll take a quarter to get back up to speed. The offensive line will get it all going in the second quarter and Northwestern won’t have enough pop and consistency to turn a few decent drives into points.