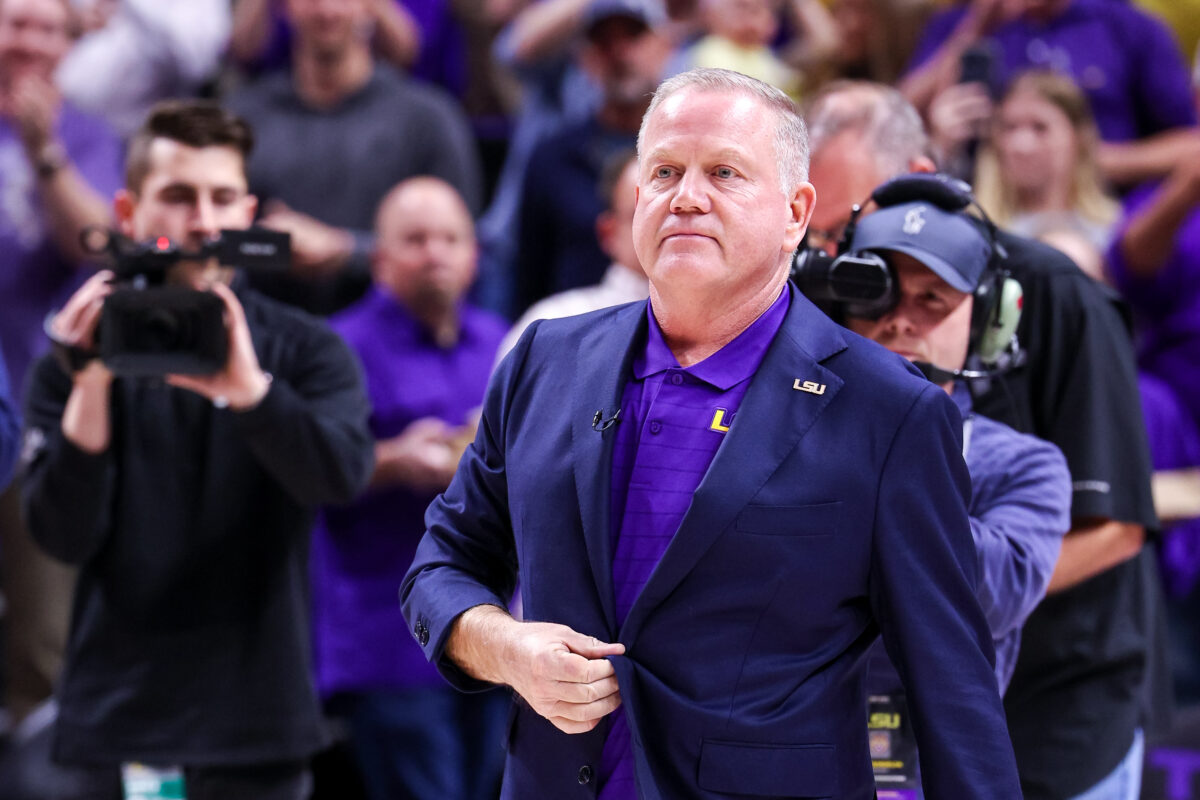 Brian Kelly wasted no time turning into an internet sensation after taking the LSU job.  Just two days after agreeing to terms with Louisiana State University his accent had already changed by the time he addressed fans at a home basketball game.

It has nothing to do with his voice but Brian Kelly is again making plenty cringe with his latest viral sensation.

Walker Howard, one of the nation’s top quarterbacks in the 2022 recruiting class and a player Notre Dame pursued, reaffirmed his commitment to LSU Sunday night ahead of the early signing period.  He posted the video on Twitter with him and Brian Kelly and all I can say is make sure you watch it with your sound turned up.

Perhaps the worst thing about all of this is that I’ll never be able to hear Garth Brooks’s “Callin’ Baton Rouge” the same ever again after all of this and that stings because that song kicks.

Whether it’s picking a college, finding a date to prom, or finding something to do on a Friday night, it’s always good to have a backup plan. Sometimes that backup plan turns out to be Brian Kelly. 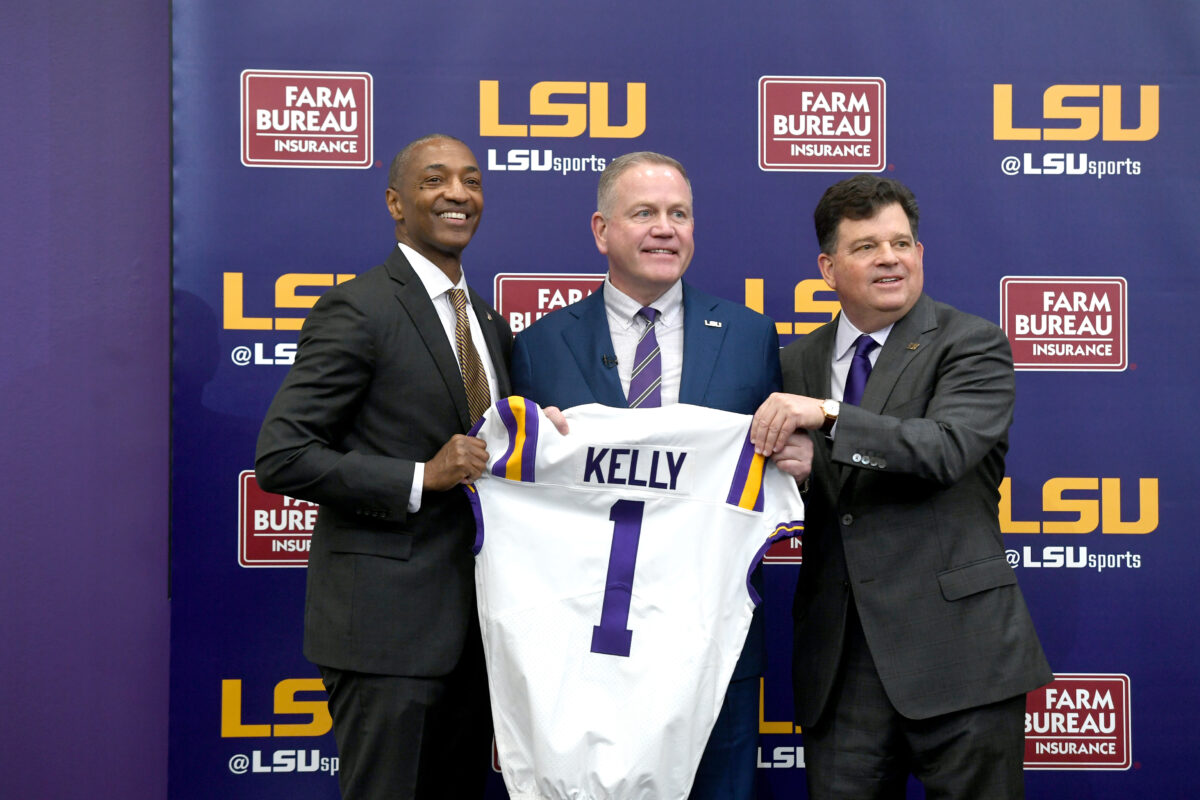 As much as LSU has trotted out Brian Kelly and made it seem like he was their dream hire for the past week it seems to be that Kelly was wasn’t the first choice.

Rumors with LSU and Lincoln Riley ran rampant, so much in fact that Oklahoma State trolled their in-state rival Sooners during their rivalry game by blaring “Callin’ Baton Rouge” at Oklahoma’s former head coach.

As it turns out there was someone else besides Riley that LSU wanted more than Kelly.

For comparison, Kelly wound up accepting a 10-year deal from LSU worth $95 million but that has plenty of incentives that in all likelihood will push it significantly north of $100 million.

Not bad money if you can get it, even if you were a backup plan.

Brian Kelly gets roasted for his newfound southern accent 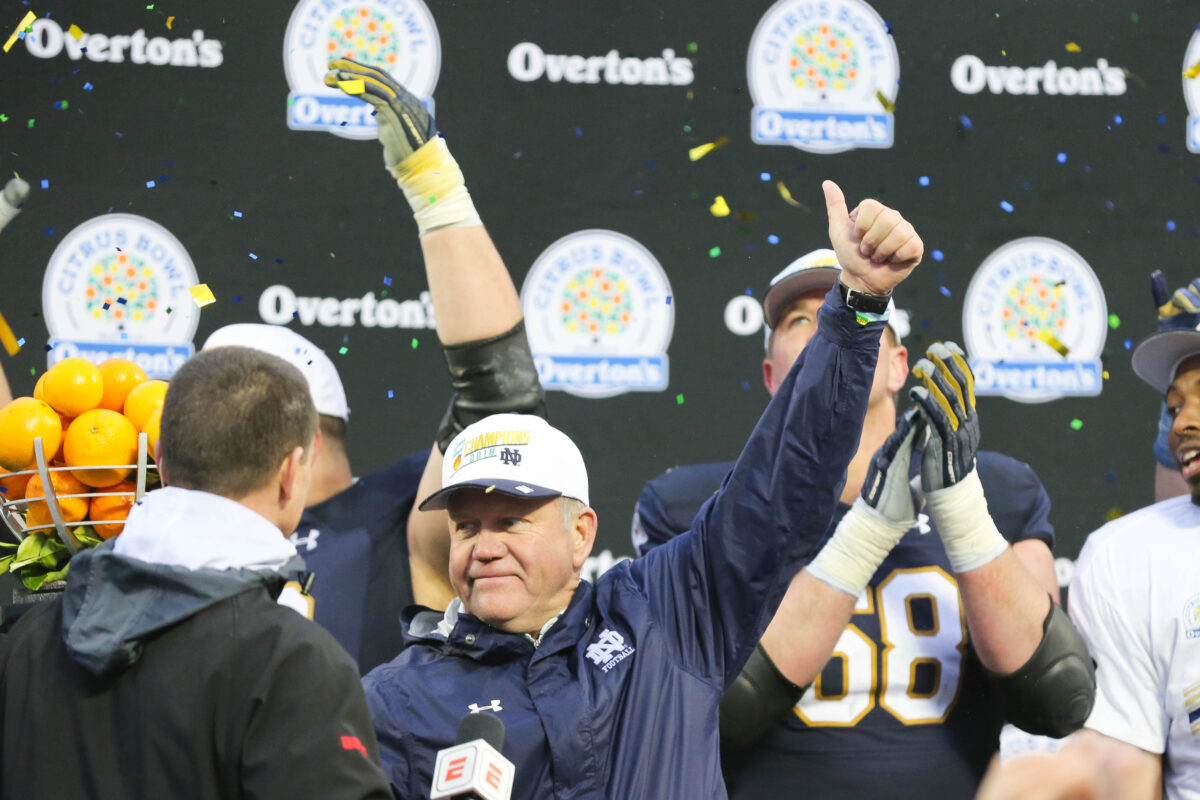 After meeting with who used to be his players at 7:00 a.m. ET for somewhere between two and 11 minutes, former Notre Dame head coach Brian Kelly sped away from campus and prepared for his journey to LSU.

If you’re interested in seeing any of Kelly’s trip from South Bend to Baton Rouge the LSU Football Twitter account has posted a variety of different pictures and we tried our best to provide a few captions to those the best way we saw fit below: 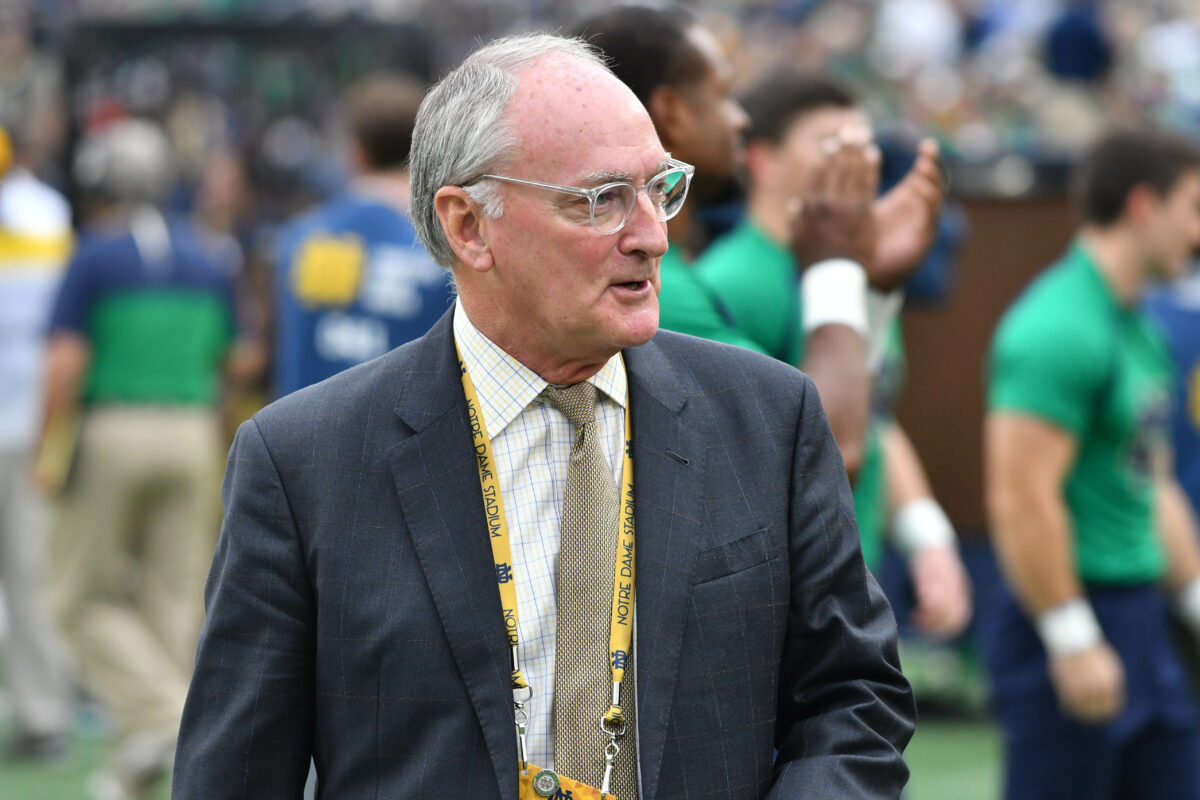 Notre Dame is on the search for a new head football coach after Brian Kelly shocked the college football world and left for LSU.  LSU made the news official early Tuesday and will introduce Kelly on Wednesday afternoon.

Notre Dame athletic director Jack Swarbrick addressed the news on Tuesday morning during a press conference on Notre Dame’s campus.  Here are the most significant things that Swarbrick had to say:

What do you do if you’re Jack Swarbrick? 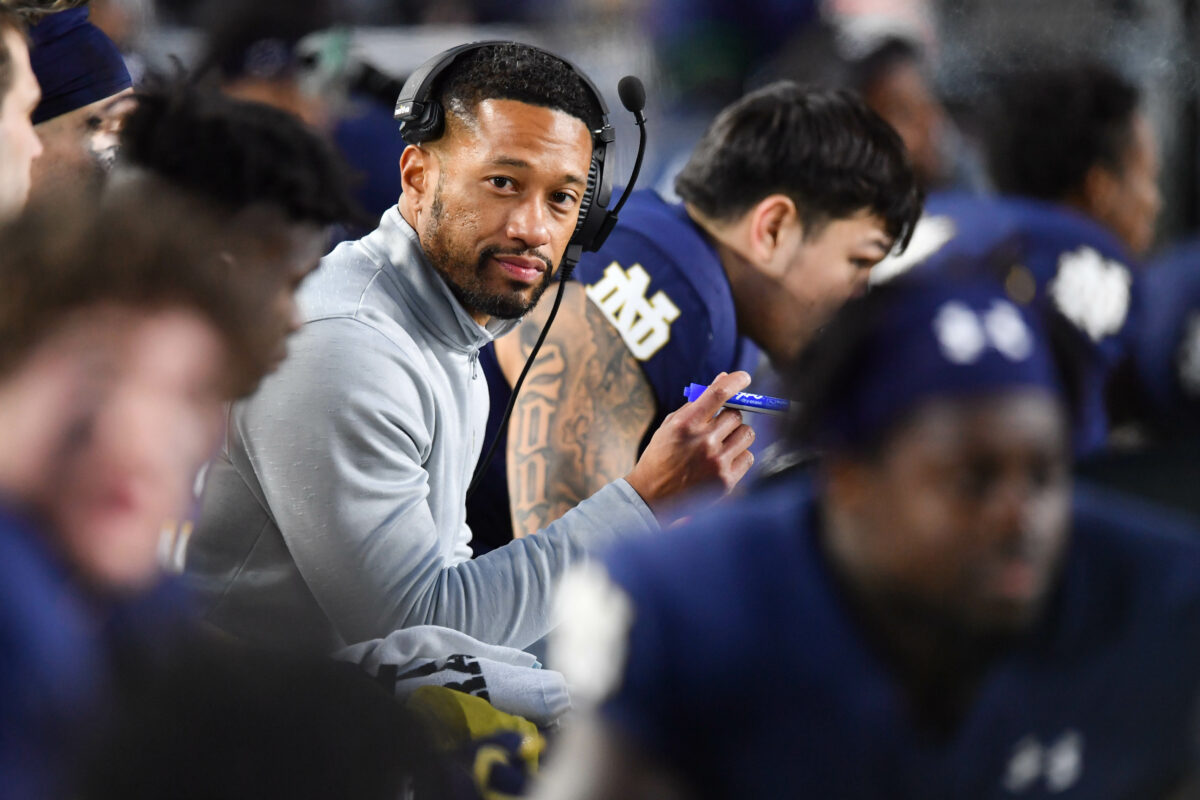 Brian Kelly’s plane to Baton Rouge doesn’t land until Tuesday afternoon but he’s already trying to take a very key piece of Notre Dame’s football program with him to LSU.

Defensive coordinator Marcus Freeman, who plenty of players and fans alike want to be the next Notre Dame head coach, seems to be main priority for Kelly to take with him to LSU according to Pete Sampson of The Athletic.  Sampson was part of The Athletic report on Monday night that originally linked Kelly to LSU and on Tuesday morning Sampson shared the following on Twitter:

This is not at all surprising as Freeman appears to be a star in the making both in-game and as a recruiter.

Does this expedite Jack Swarbrick’s plan in hiring the next head coach?

Does it make Freeman more likely to be that hire?

Jack Swarbrick is a smart guy and had to have seen this coming from Kelly as soon as he knew he was leaving.

What I think this means is that we’ll know very soon if Freeman is a legitimate candidate for the head coach position or not and the only hire that I could possibly imagine him staying at Notre Dame with is if it were his old boss Luke Fickell from Cincinnati.

The pursuit of Freeman is hardly surprising but how Swarbrick and Notre Dame respond will have a massive impact on the future of the football program.

So who’s next? 10 possible targets to be Notre Dame’s next head coach

Photo gallery: Brian Kelly through the years at Notre Dame

How would you respond to this text if you were a player? 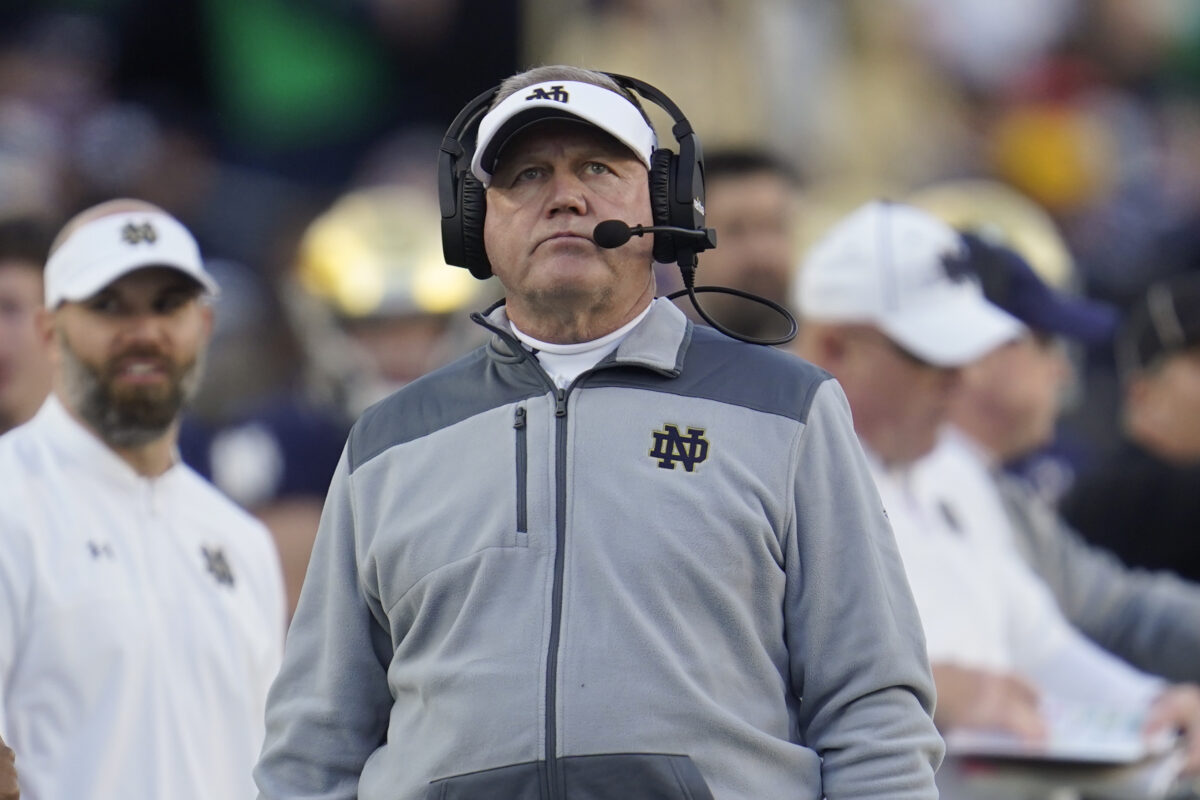 Imagine just enjoying your night scrolling through social media when you suddenly come across news that affects you personally. No one in your inner circle told you this was happening, and you’ve suddenly found out that your life is changing drastically at the same time as everyone else. That’s what happened Monday as nobody at Notre Dame, including the football players, knew that Brian Kelly was leaving for LSU.

In what appears to be Kelly’s version of damage control, the soon-to-be-former Irish coach sent out the following message to the team:

The plan is for Kelly to meet with the team tomorrow at 7 a.m.

Here is the full message pic.twitter.com/sqAl2txZIy

Oh, to be a fly on the wall during that meeting. It has to be hard to believe that Kelly hasn’t lost the respect of at least some of his players. All Kelly had to do was communicate the news before it was made public, and the blowback that is certain to come could have been avoided or at least lessened. Instead, Kelly has a big mess on his hands, and it might be too big for him to clean up before he heads south.

Will the Irish be better or worse without Kelly? 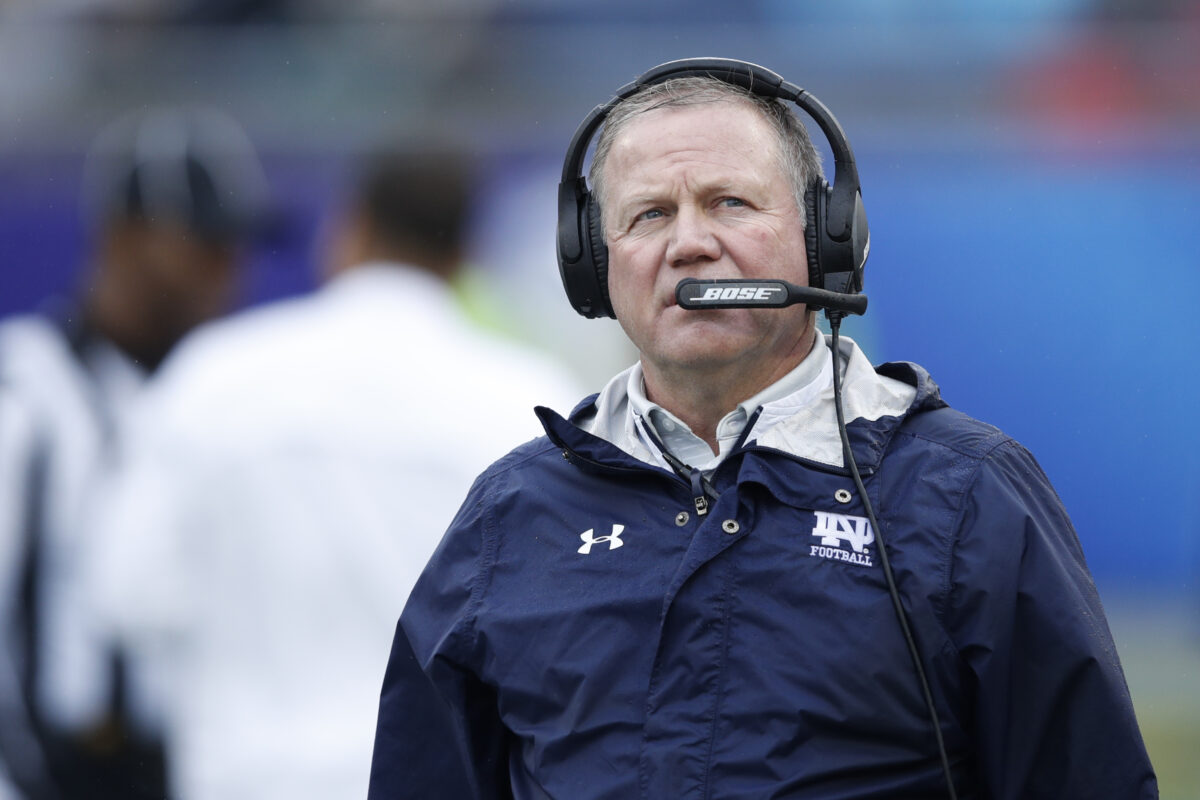 The last 11-years have been fantastic, the Irish have seen some great football, four straight 10-win seasons and trips to the BCS National Title game along with two berths into the College Football Playoff. Brian Kelly has elevated the team to new heights, but as he is now leaving to the Bayou, what is to be made of the Irish?

Personally, I feel like this is a blessing in disguise, a similar situation to another Midwest power, Ohio State had with head coach John Cooper. Cooper did everything but win the big game, constantly losing to their rival Michigan while occasionally winning lower-tier bowl games. Sound familiar?

Kelly has amassed the most wins in Notre Dame football history as a head coach, but what does he have to show for it? A Citrus Bowl win. Camping World crown. How about a Sun Bowl victory? Even a Music City Bowl win was thrown in there. Nothing to write home about.

For all that Kelly did for the program, he will go down as not being able to win the big game. As for the Buckeyes, they would go on to hire Jim Tressel, and in year 2 they hoisted the National Championship Trophy. The Irish could very well be in the same exact position.

The difference between the two? The Ohio State roster was diluted with over-rated talent, the Irish roster is quiet the opposite. I, for one, believe that the future is bright, regardless of who is brought in to replace Kelly. That coach will have to be able to win the big game and if they’re just winning 50% of those, it will be much better than what Kelly was able to accomplish.

In no means am I saying the next coach will win over 100-games and surpass Kelly as the all-time wins leader. What I do expect is that the next coach will have more success in big games, which should lead the Irish to a place they haven’t been since 1988. 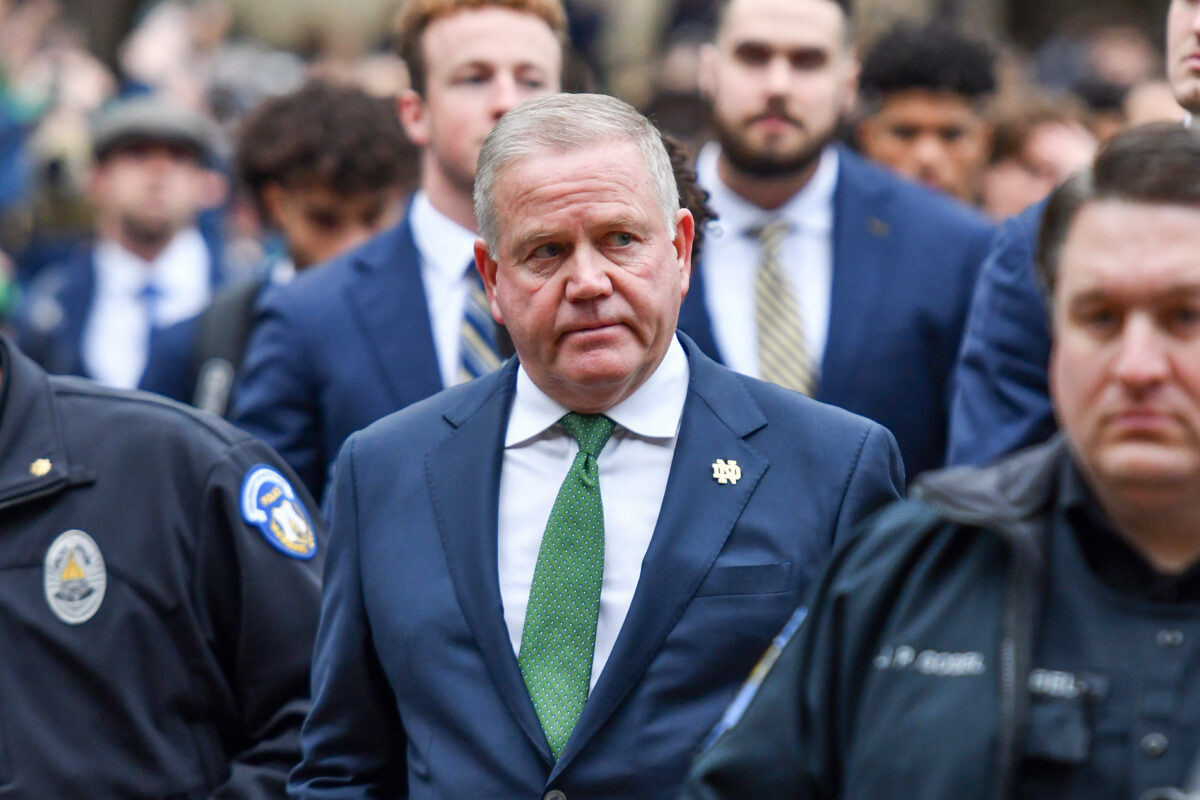 If you were surprised by Brian Kelly reportedly leaving Notre Dame for LSU’s head coaching job, you’re not alone. In fact, people on Kelly’s own staff at Notre Dame and other prominent folks within the university don’t appear to have seen this coming, and they’re not taking it well. Matt Fortuna of The Athletic is reporting just how deeply this runs:

To say that Notre Dame coaches, admins and boosters I have spoken with in the last 15 minutes have been blindsided is an understatement. An absolutely shocking development in South Bend. https://t.co/Lnwk06Eqfu

One Irish assistant apparently found out the news about his boss at a particularly bad time:

This is usually how these things go, but Brian Kelly has ghosted everyone at Notre Dame. Just spoke to one assistant who saw reports on his phone tonight as he was exiting a recruit's home: "The news broke when I walked out of the house, so I look like a f—– a–hole."

So it should come as no surprise that Kelly’s players don’t seem to have known about this either. Otherwise, Kyren Williams and Isaiah Foskey wouldn’t have taken to Twitter to give the understatements of the evening:

🤦🏾‍♂️This has been a wild Monday night

As of right now, LSU has not been scheduled as a future regular-season opponent for the Irish. However, if that changes or these programs meet in a bowl as they did twice during Kelly’s Irish tenure, you better believe emotions will run high, especially if the people employed at Notre Dame now are still around.

The Irish have succeeded against LSU under Brian Kelly. 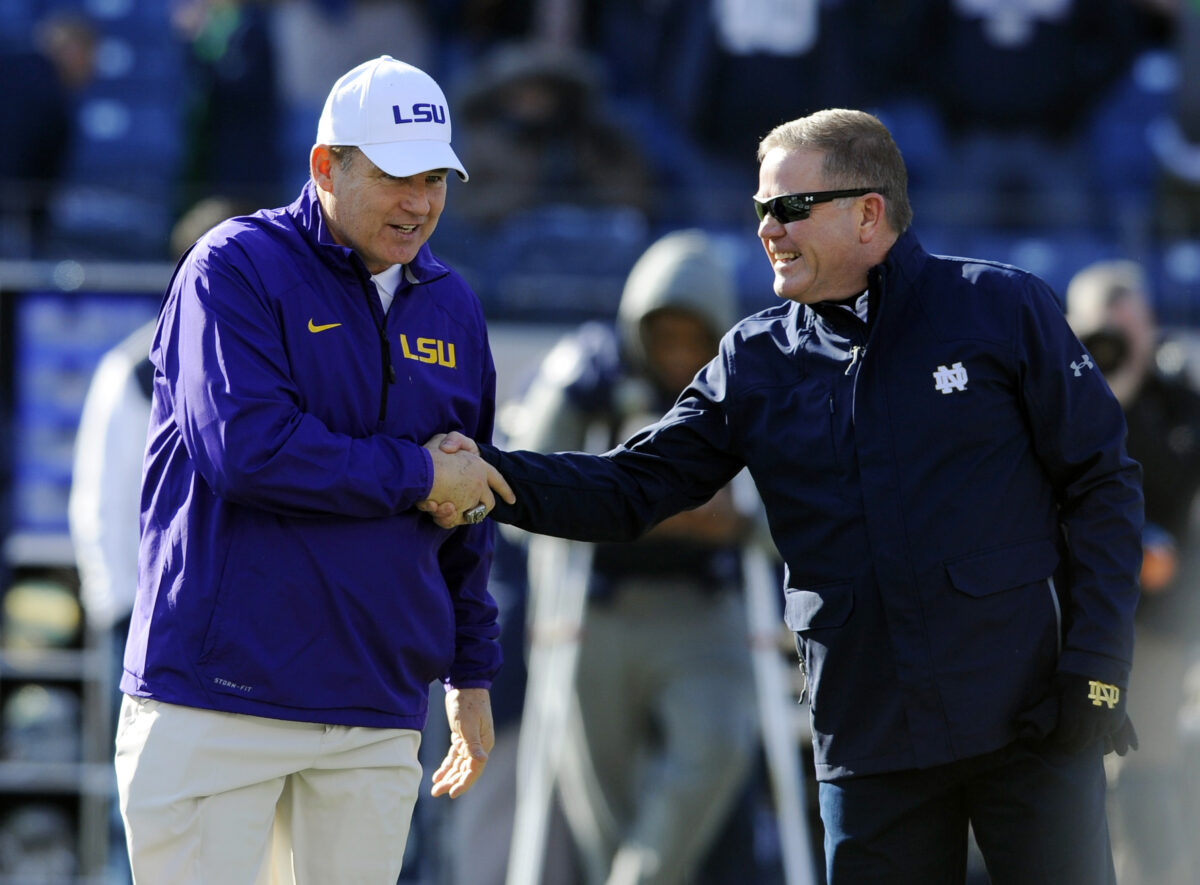 If you’re reading this story, chances are you’re as shocked as anyone that Brian Kelly reportedly is leaving Notre Dame to coach at LSU. For anyone with a long memory, it might be a slightly awkward arrangement at first because Kelly has coached two Irish teams to bowl wins over the Tigers. The first was a 31-28 win in the 2014 Music City Bowl that was decided on a last-second field goal from Kyle Brindza. Another close contest came in the 2018 Citrus Bowl, which the Irish won, 21-17, on a late 55-yard touchdown pass from Ian Book to Miles Boykin.

Here’s a look at Kelly during these games: 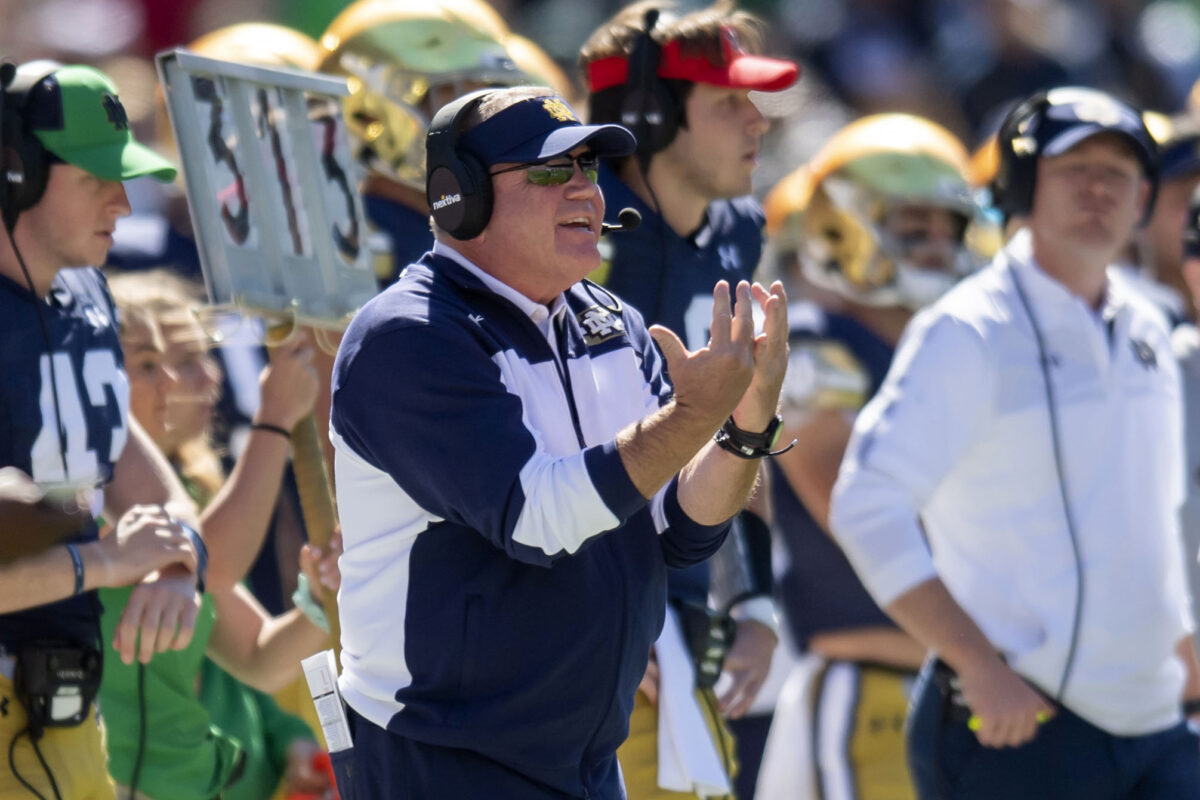 If you thought Sunday was crazy with Lincoln Riley leaving Oklahoma for LSU then you’re going to want to sit down.

Brian Kelly is expected to be named LSU’s new football coach as early as Tuesday according to Pete Thamel of Yahoo! Sports.

The Athletic broke the news Monday that LSU was targeting Kelly and just a few short hours later Thamel was the first to share the news of Kelly’s departure.

There are reasons for Kelly to take the job as I’m sure a Brinks truck full of cash is headed his way. At the same time I’m flat-out shocked he actually did it.

We will have more all night as this MASSIVE story develops.