The 2022 NFL schedule is finally out. Here is a fact for every team regarding the schedule. 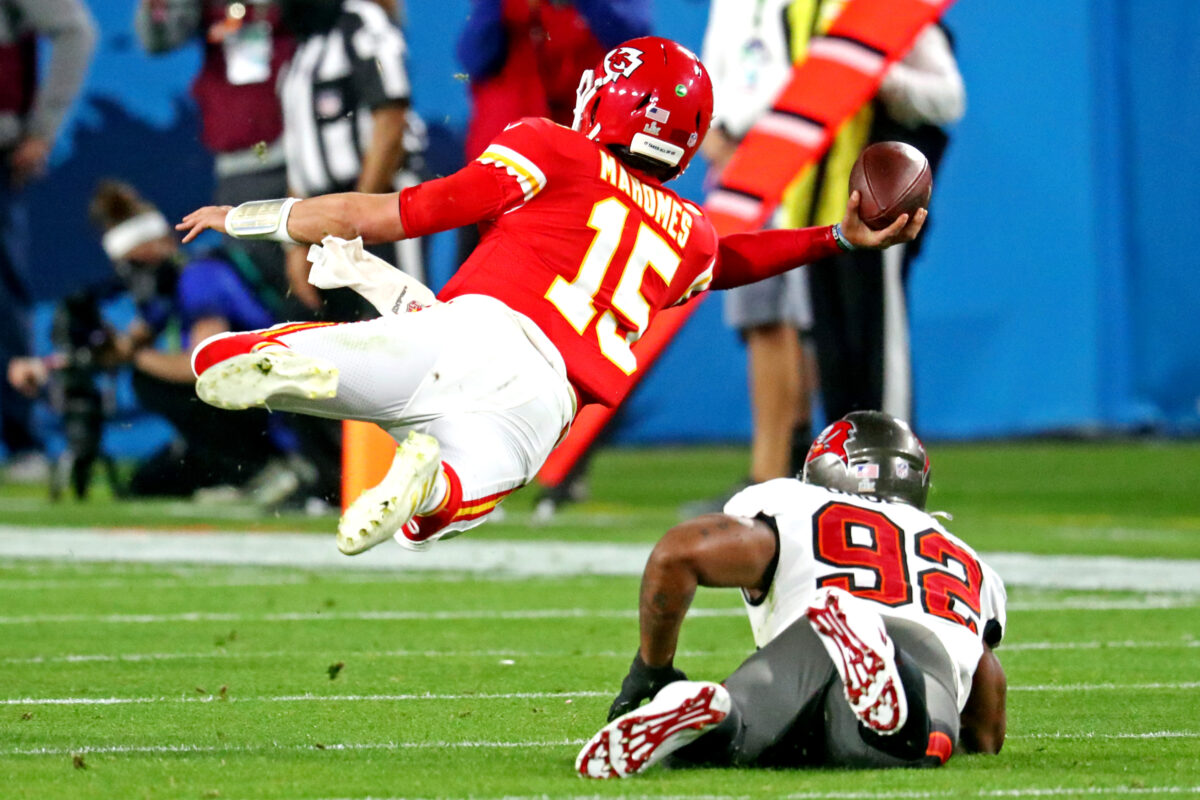 The NFL released its complete schedule for the 2022 season on Thursday night.

No more wondering when and where teams will face each other. The times and dates have been revealed in full.

Game 1 of the season is Thursday, Sept. 8 when the Buffalo Bills go out to SoFi Stadium to face the Super Bowl champion Los Angeles Rams.

There are Super Bowl rematches on the schedule as well. The Kansas City Chiefs square off against the Tampa Bay Buccaneers in Week 4.

Amazon Prime Video also enters the mix as a broadcaster — the first time since 1997 a different network entirely from the traditional bunch will broadcast NFL games exclusively on its platform.

Here is a fact for every team regarding the 2022 schedule.

Here’s every game in the 2022 NFL season, organized by week. 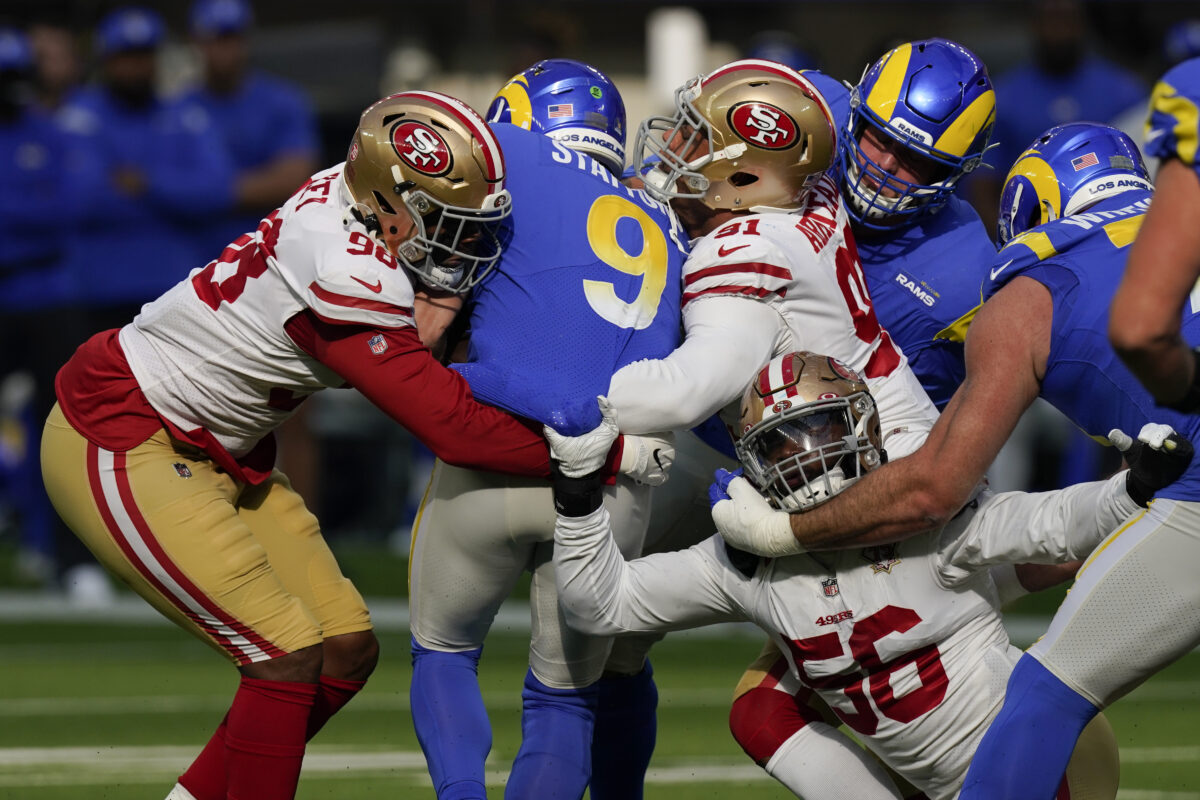 From the league: The NFL announced its 18-week, 272-game regular-season schedule for 2022, which kicks off on Thursday night, September 8, in Los Angeles and concludes with 16 division games in Week 18 – two on Saturday, January 7, and 14 on Sunday, January 8.

The 2022 NFL schedule will feature each team playing 17 regular-season games and three preseason games for the second consecutive year.

The 17th game will feature teams from opposing conferences that finished in the same standing within their respective divisions the previous season. The NFC will be the home conference for the 17th game in 2022.

ESPN will televise one game each Monday night in Weeks 1-17 and will be simulcast on ABC in Weeks 1, 3, 15 and 17. In Week 2, there will be two games on Monday night as Buffalo hosts Tennessee on ESPN (7:15 PM ET) while Minnesota visits Philadelphia on ABC (8:30 PM ET). There will be no Monday night game on the final regular-season weekend (Week 18) to provide more flexibility for the scheduling of the opening weekend of the NFL playoffs.

Additionally, ESPN/ABC will air two games with playoff implications on the Saturday of Week 18, January 7. These games will be selected following the conclusion of Week 17.

A select number of games will be “cross-flexed,” moving between CBS and FOX to bring potentially under-distributed games to wider audiences. Some of those contests were announced today and other “cross-flexed” games will be decided during the season.

The NFL schedule features five international regular-season games – three in the UK, the first-ever NFL regular-season game in Germany and one in Mexico. Last year, as part of the League’s expansion of the regular season to 17 games, it was determined that, beginning with the 2022 season, up to four of the teams from the conference whose teams were eligible for a ninth regular-season home game would instead be designated to play a neutral-site international game each year.

The international series kicks off with games on back-to-back weekends at Tottenham Hotspur Stadium in London, as New Orleans and Minnesota meet in Week 4 (9:30 AM ET, NFL Network) followed by Green Bay and the New York Giants in Week 5 (9:30 AM ET, NFL Network). The first international game on the 2022 schedule will mark the 100th game in league history (preseason and regular-season combined) played outside the United States.

In Week 8 (9:30 AM ET, ESPN+), the London action shifts to Wembley Stadium, where the Jacksonville Jaguars will face the Denver Broncos. In Week 10 (9:30 AM ET, NFL Network), the first-ever regular-season NFL game in Germany will take place at Allianz Arena – Home of FC Bayern Munich between Tampa Bay and Seattle. The 2022 international slate wraps up with a return to Mexico City in Week 11 on Monday Night Football (8:15 PM ET, ESPN) with a matchup between NFC West rivals San Francisco and Arizona at Estadio Azteca.

Thanksgiving will feature a tripleheader on Thursday, November 24. The first game will feature the Buffalo Bills traveling to Detroit to face the Lions (12:30 PM ET, CBS). The late afternoon game will match two NFC East rivals, as the New York Giants visit the Dallas Cowboys (4:30 PM ET, FOX). The Thanksgiving Day festivities conclude with an interconference matchup as the Patriots travel to Minnesota to face the Vikings on NBC (8:20 PM ET).

The regular season will conclude with Week 18 on Saturday, January 7, and Sunday, January 8. For the 13th consecutive year, all 16 games scheduled for the final week of the season are division contests, enhancing the potential for more games with playoff ramifications.

NFL revenge games? We’ve got ’em, as Touchdown Wire’s Doug Farrar details the most obvious cases for retribution in the 2022 NFL schedule. 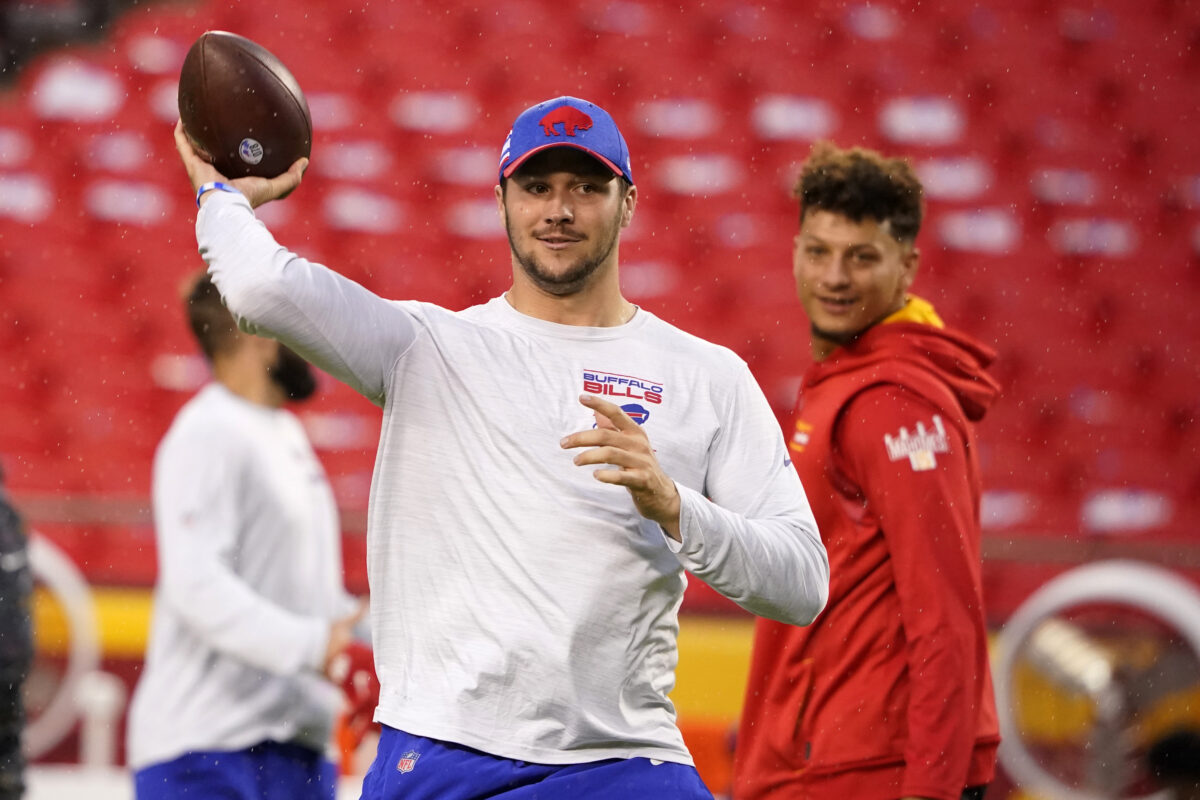 The concept of the “revenge game,” instances in which players try to prove to their former teams that discarding them was a serious mistake, or in which teams try to exact some sort of retribution for season-ruining results, is sketchy at best. There are times when one player can take it all out on the team that thought him unimportant in the grand scheme of things, and teams can exact their metaphorical pound of flesh in future games.

But there are just as many times where players or teams get all over their skis about revenge, and forget to play winning football. So, when we look at the most compelling potential revenge games of the 2022 NFL season now that the full schedule has been released, keep in mind that things don’t always go the way of the dragon.

That said, here are the most interesting possible revenge games of the 2022 NFL season.

Here’s every NFL team’s strength of schedule for the 2022 season. 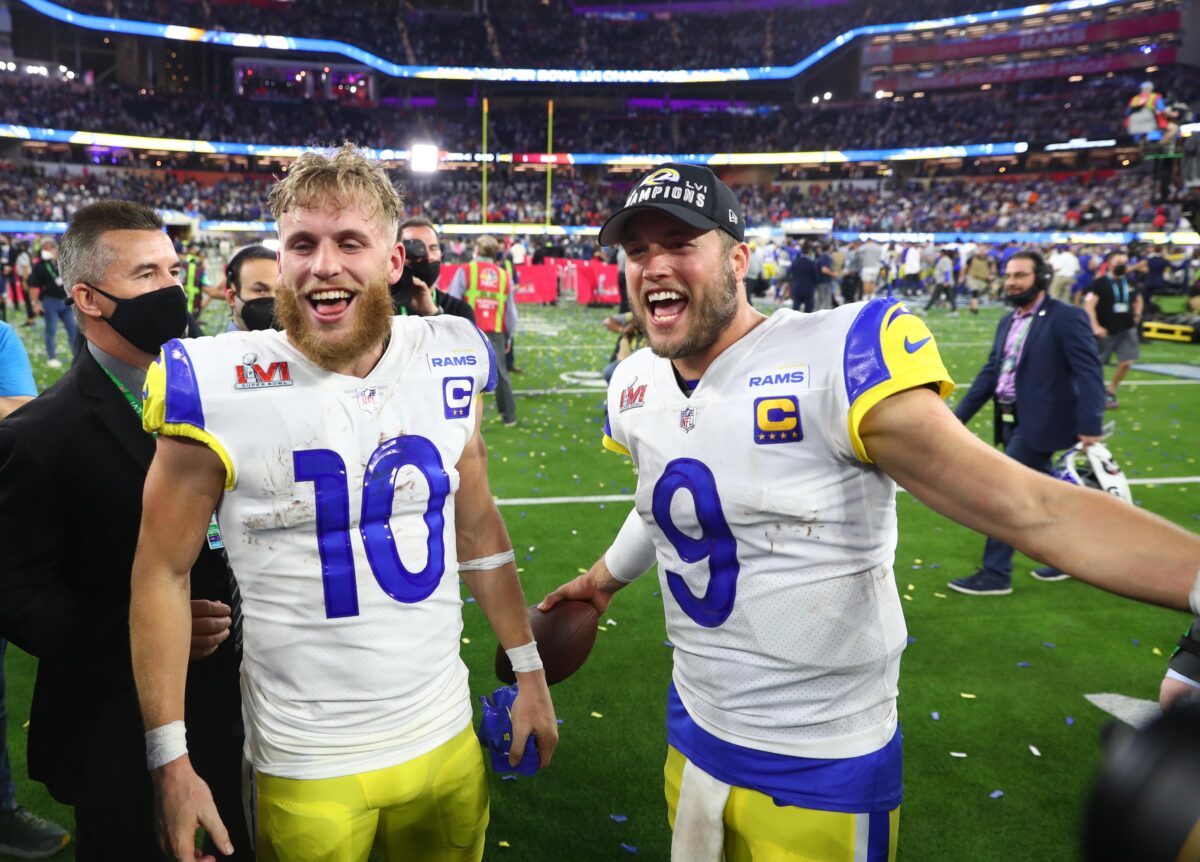 Projecting any team’s future outcome based on strength of schedule is a dicey proposition. Every season, we see teams go from first to worst, and vice versa. So, the ability to codify this based on opponent strength that may or may not apply? Questionable.

But the 2022 schedule does give us some clues which we probably already knew. When looking at the 2022 strength of schedule for all NFL teams, it’s abundantly clear that the AFC West and NFC West are loaded. Add in the fact that those two divisions face off in 2022, and you have some very tough stretches for those teams.

On the offset, we have relatively unspectacular divisions giving their teams some supposedly easy stretches. Will we see a team or two rise from the muck to make these numbers kind of irrelevant? It’s entirely possible.

But here are the strengths of schedule, such as they are, for every NFL team in 2022.

Tom Brady and the Bucs will host Patrick Mahomes and the Chiefs in Week 4 this season, in front of a national audience 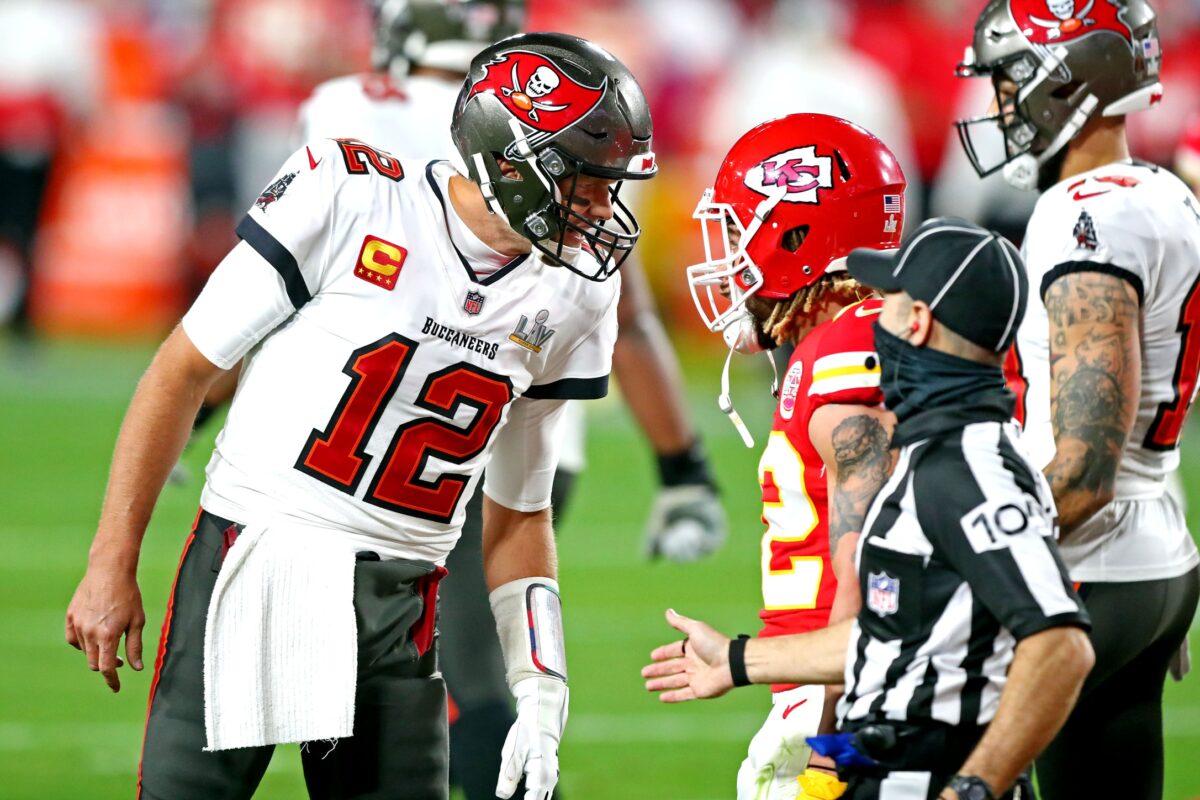 The 2022 NFL regular-season schedule is set to release Thursday night, but some of the bigger matchups have been trickling out in recent days, and now we know when Tom Brady and Patrick Mahomes will face off this year.

Mahomes got the best of Brady in their first matchup since the GOAT left the New England Patriots for Tampa Bay, but Brady got the last laugh with a dominant win over the Chiefs in the Super Bowl later that year.

This time around, it could be Brady’s last ride before actually retiring, so this showdown might be the last time we get to see these two superstar quarterbacks face off on the same field.