8 former members of the New York Giants are among 129 modern-era nominees for the Pro Football Hall of Fame class of 2023. 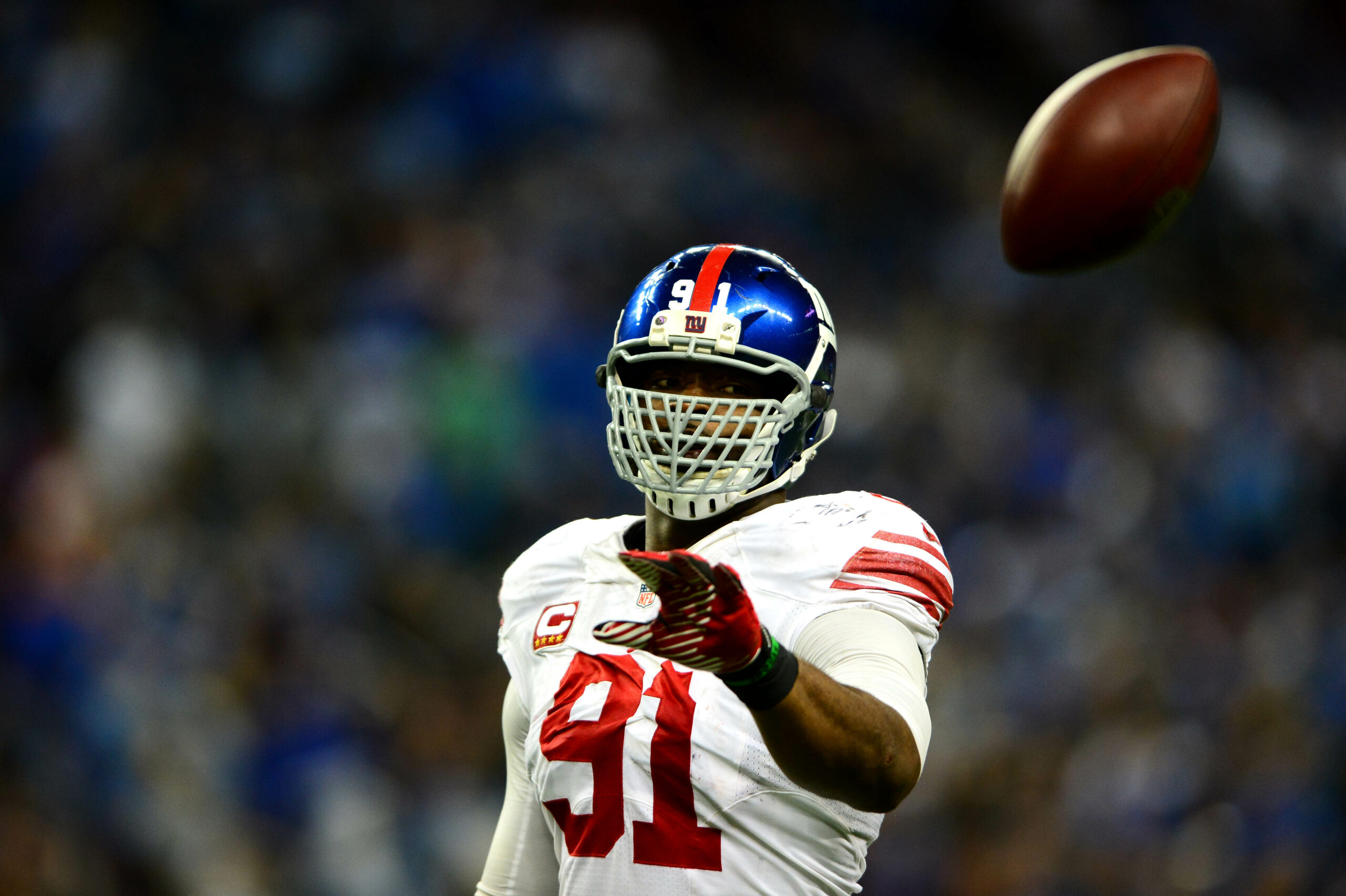 Eight former New York Giants are among the list of 129 Modern-Era Nominees for the Pro Football Hall of Fame’s Class of 2023.

The list of potential inductees consists of “67 offensive players, 50 defensive players and 12 special teams players. The list of Modern-Era Nominees will be reduced to 25 Semifinalists in November and, from there, to 15 Finalists whose names will be announced in early January.”

Per the Pro Football Hall of Fame:

Nineteen Finalists will be presented to the full 49-member Pro Football Hall of Fame Selection Committee during its annual meeting to choose the Class of 2023. Those candidates will consist of 15 Modern-Era Players Finalists and the recently named Seniors Finalists Joe Klecko, Chuck Howley and Ken Riley and Coach/Contributor Finalist Don Coryell.

Don Coryell might finally be inducted into the Pro Football Hall of Fame in 2023. Here’s why that honor is long, long overdue. 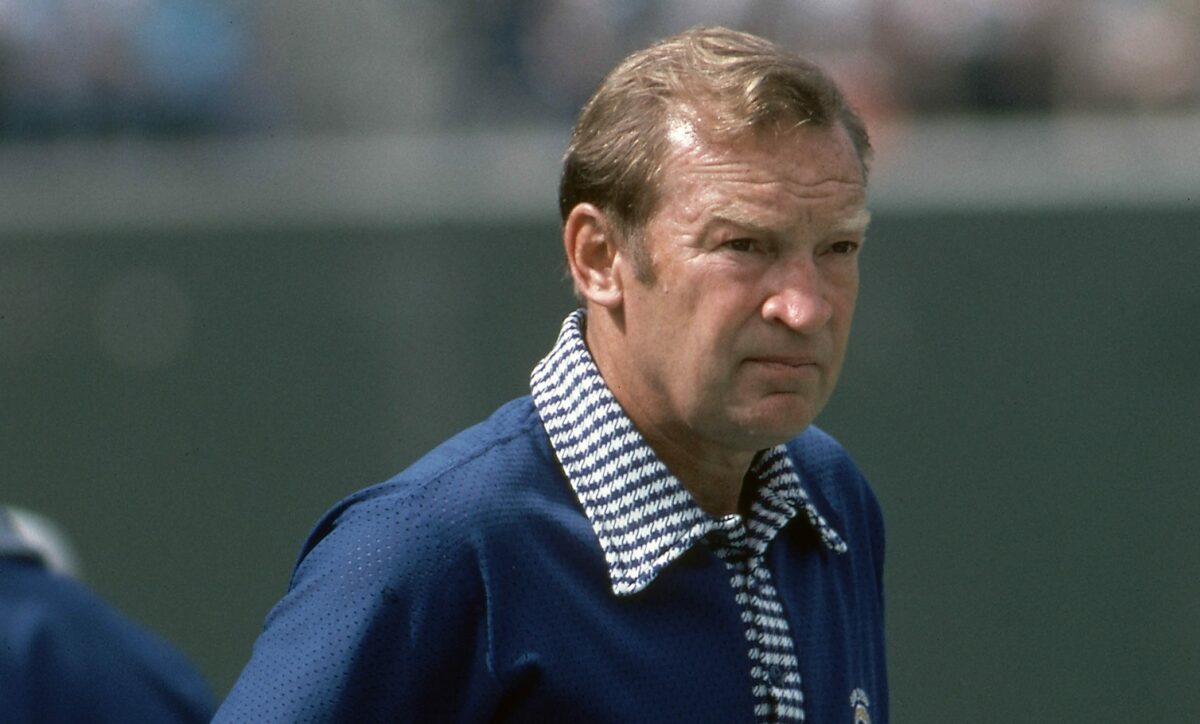 “I don’t think there’s ever been a coach who was more courageous about creating offense.” Dan Fouts on Don Coryell

Don Coryell was many things in his 85 years on this Earth. He was an Army paratrooper during World War II, a defensive back for the Washington Huskies, a longtime high school and college coach, the head coach of the St. Louis Cardinals and San Diego Chargers, and finally, a retiree living a gentle life in the Pacific Northwest. Most prominently, of course, was his work in the NFL from 1973 through 1986, when he took the Sid Gillman vertical passing game, added his own rushing formation concepts, and spun the NFL’s passing offense forward a generation. Coryell can be considered the functional link between the deep passing games of the 1960s and 1970s, and the West Coast Offense that followed into the 1980s and 1990s. As much as any coach in the history of football, Coryell preached the gospel of the nuanced, aggressive passing game wherever he went — and wherever he went, he got results.

On Wednesday, the Pro Football Hall of Fame announced that Coryell, who died on July 1, 2010, was named as the finalist for the Coach/Contributor class of 2023. From the HOF:

A four-hour meeting of the Hall of Fame’s Coach/Contributor Committee concluded Tuesday afternoon with Coryell emerging from the group of 12 Coach/Contributor candidates remaining under consideration as the Finalist for next year’s class of enshrinees. The Hall of Fame’s full 49-person Selection Committee will consider Coryell for election – along with 15 Modern-Era Players and three Seniors – when it meets to choose the entire Class of 2023 in January.

Coryell would be elected to the Pro Football Hall of Fame if he receives at least 80% approval in the up-or-down balloting next year.

Last week, the Hall’s Seniors Committee chose Chuck Howley, Joe Klecko and Ken Riley as Finalists for the Class of 2023. Each of them also would be elected if he receives 80% approval at the January selection meeting.

In St. Louis, Coryell was named Associated Press Coach of the Year in 1974, his second season with the Cardinals. He led the team to a 10-4 record and their first playoff appearance since the 1948 NFL Championship Game. They followed that breakthrough year with an 11-win regular season in 1975 that equaled the then-franchise record for victories in a season (1948, 1925).

After five seasons in St. Louis, Coryell became head coach of the San Diego Chargers, and with future Hall of Famers Dan Fouts, Kellen Winslow, and Charlie Joiner built the “Air Coryell” offense that ranked atop the NFL in numerous statistics. In his nine years with the Chargers (1978-1986), the team led the league in total offense five times, passing yards seven times (and was second another year) and scoring three times.

His 1980 and 1981 teams reached the AFC title games, falling one win short of the Super Bowl. Prior to Coryell’s arrival, the Chargers had not posted a winning record for eight seasons and had not qualified for the playoffs since appearing in the AFL title game in 1965.

Several Hall of Fame coaches voiced support for Coryell as a Hall of Fame-worthy candidate over the years, including Joe Gibbs, John Madden, Dick Vermeil, and Bill Walsh.

We’ve said for as long as we can remember that Coryell already should have been in the Hall of Fame, as a coach and as a schematic innovator. Let’s get into the details of why.

Bryant Young touched everyone with his Hall of Fame induction speech 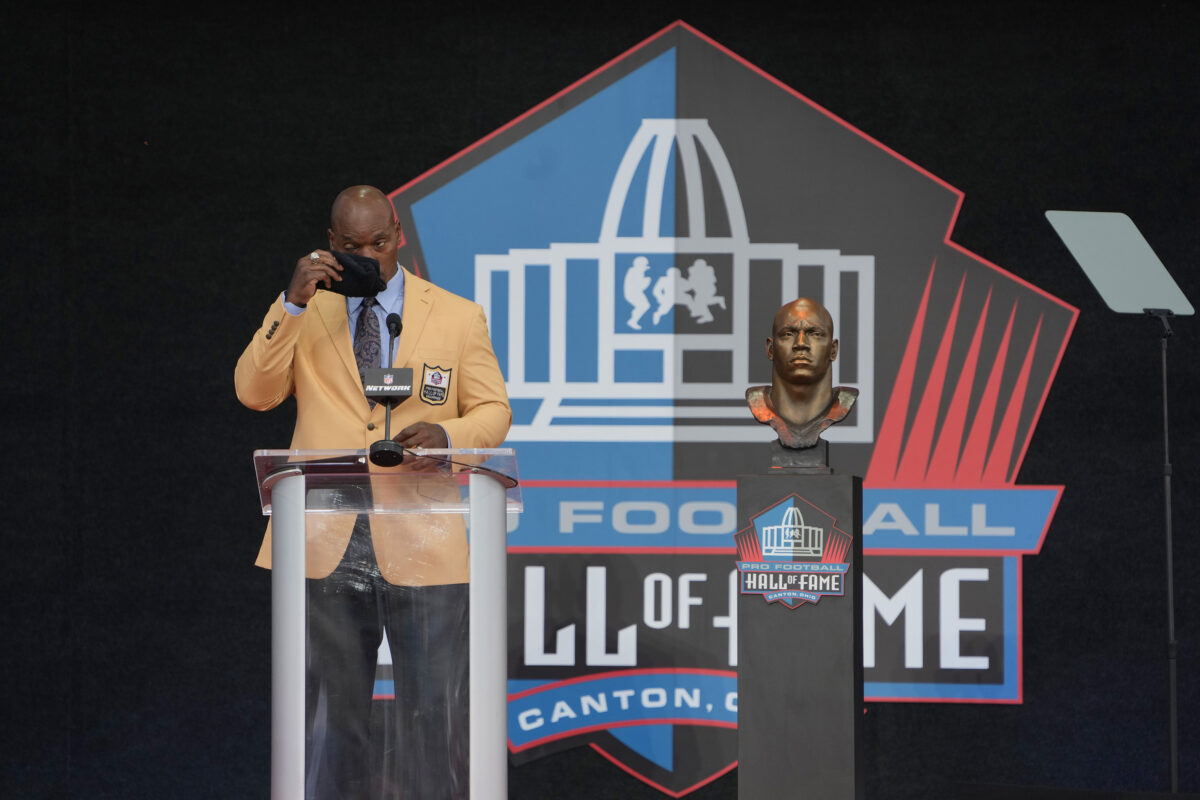 The Hall of Fame induction ceremony brings out a variety of emotions.

One of the most intense on Saturday in Canton, Ohio, was when former San Francisco 49ers star Bryant Young spoke.

The defensive line great offered a touching tribute to his late son Colby, who lost his battle with cancer at age 15.

Bryant Young's son Colby lost his battle with cancer when he was just 15 years old. Bryant keeps his son's memory alive, ever day and especially today.

What a beautiful moment. ❤️🙏 @Bgr8t

“In this, my 10th year of eligibility, I enter the Hall as a member of the Class of 2022,” Young said. “Twenty-two was Colby’s favorite number.”

The entire presentation and speech: 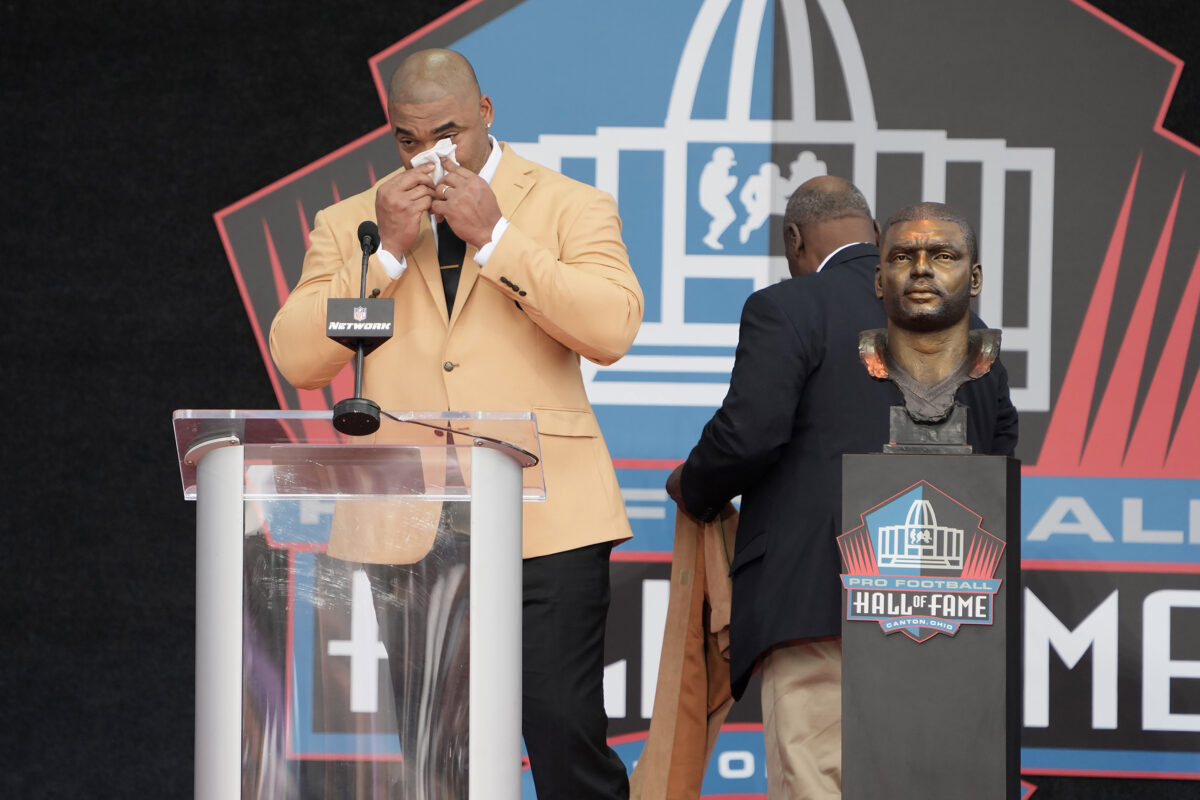 Here are highlights of each induction speech.

Who will be inducted into the Pro Football Hall of Fame today, and how can you watch the ceremonies? We have the answers. 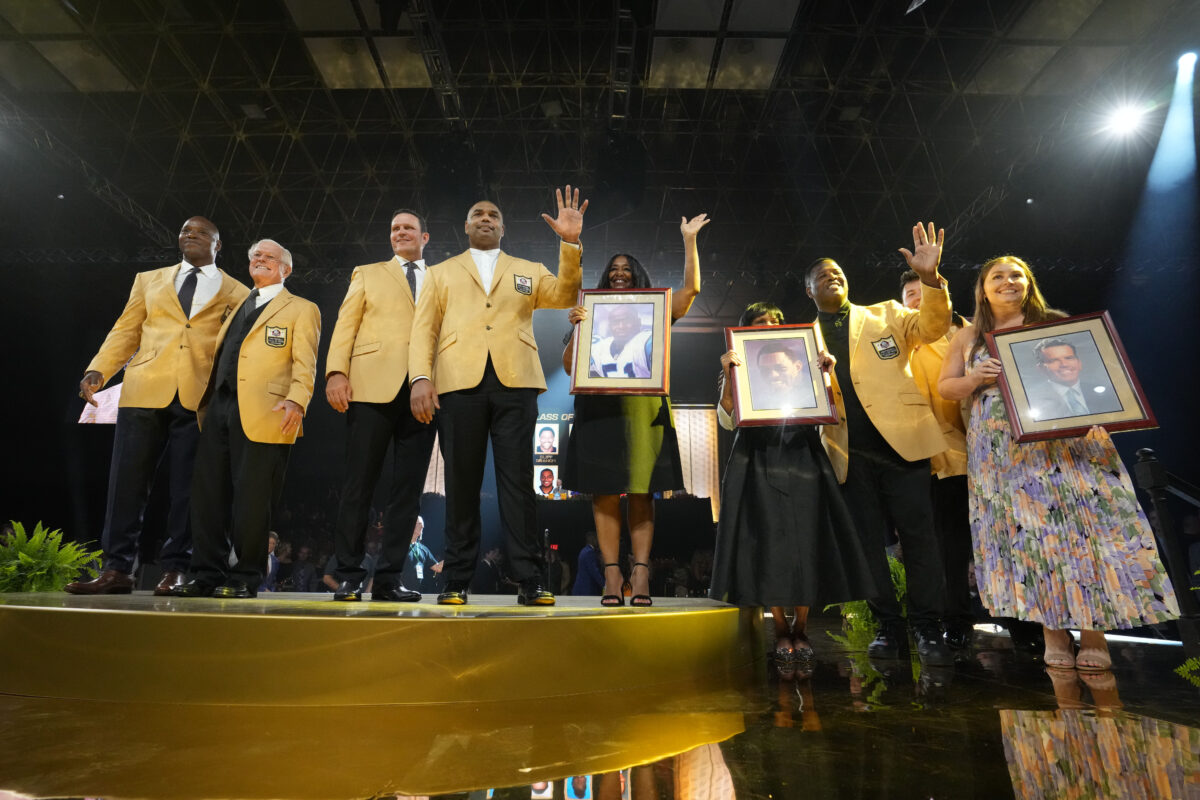 At 12:00 p.m. on Saturday, August 6, the Pro Football Hall of Fame will have its annual ceremony celebrating a new class of enshrines.

From ESPN, who will televise the event:

ESPN Radio will also broadcast the enshrinees’ speeches and share insights from special guests throughout the day on Saturday. On the ground in Canton, Jaguars’ reporter, Mike DiRocco will be covering all festivities around the induction ceremonies on behalf of NFL Nation.

(All enshrinee information courtesy of the Pro Football Hall of Fame). 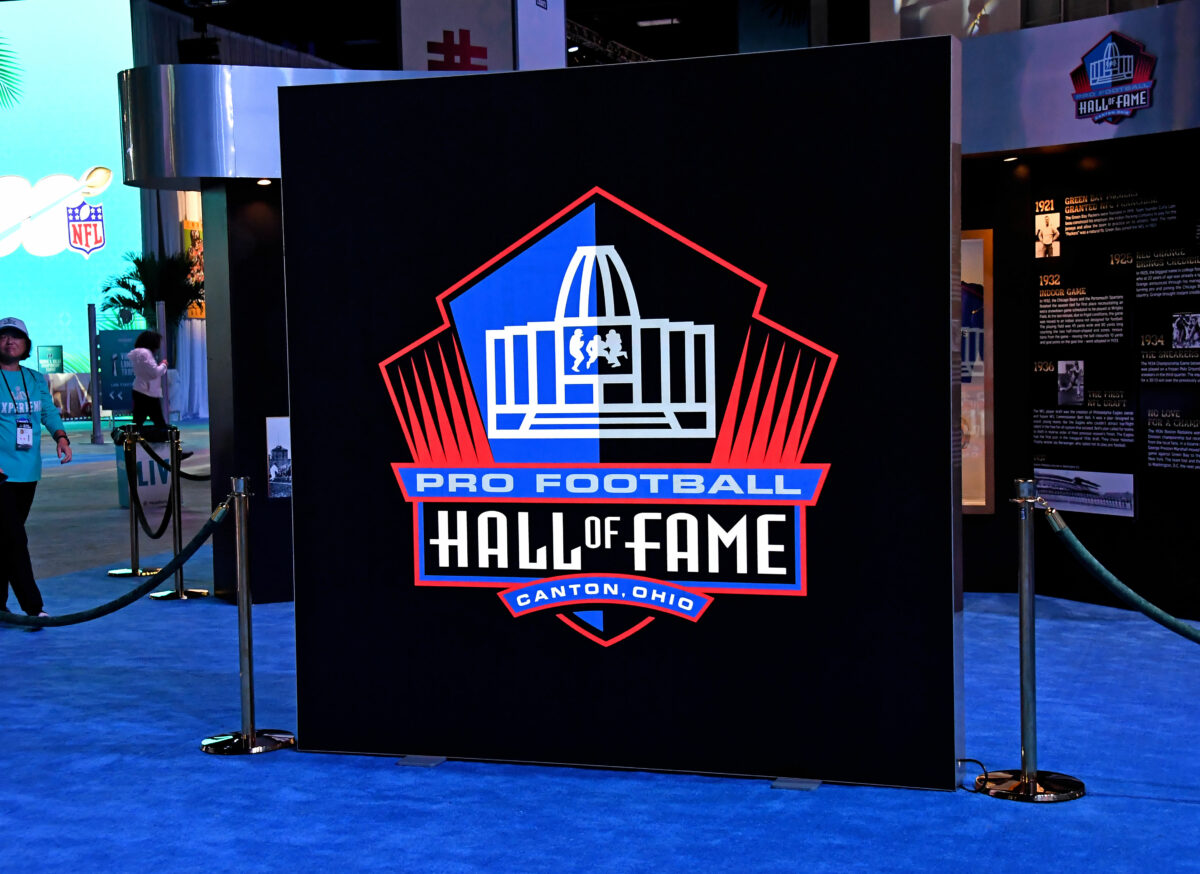 The Pro Football Hall of Fame announced the 15 finalists for the class of 2022 this week.

This group was broken down from an initial list of 123 nominees. It was reduced to 26 semifinalists on Nov. 24.

In addition, Dick Vermeil, Art McNally and Cliff Branch, the finalists in the Coach, Contributor and Senior categories, respectively, also are candidates for the Class of 2022.

The eventual inductees will be announced on Feb. 10 at the NFL Honors.

Will this be the year Hines Ward finally gets the nod for the HOF? 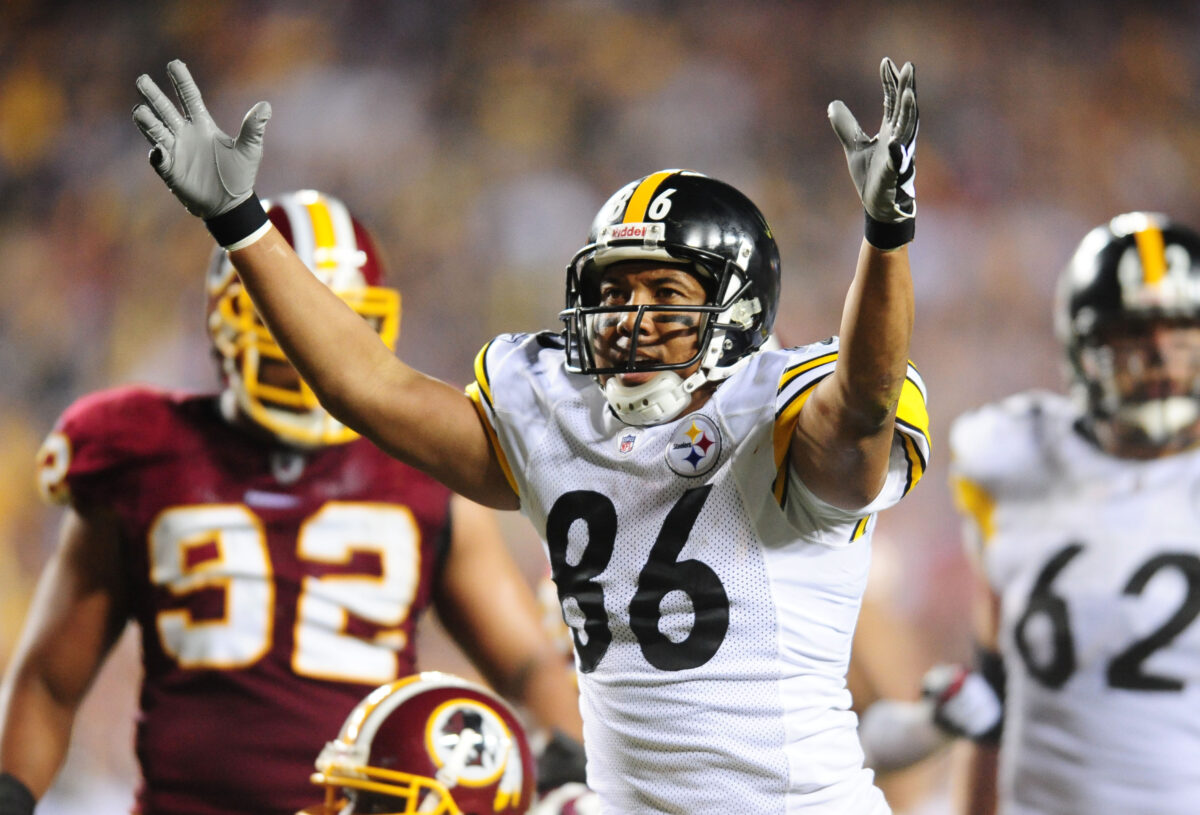 The Pro Football Hall of Fame announced the 26 modern-era semifinalists for the 2022 class of the hall of fame. This marks the sixth time former Pittsburgh Steelers wide receiver Hines Ward has been nominated for the HOF.

Ward spent all 14 of his NFL seasons with the Steelers. After being a third-round pick out of Georgia back in 1998, Ward quickly became not only a fan favorite but one of the most dependable receivers in the league.

In his career, Ward has 1,000 career receptions. He is one of only 14 receivers in league history to eclipse that mark. Ward has 12,083 career receiving yards and 85 receiving touchdowns. He was named to the four Pro Bowls, named an All-Pro three times and was named a Super Bowl MVP once.

If we are being honest, getting Ward into the Hall of Fame is an uphill climb. The wide receiver position is so saturated and players with far more dynamic careers are still waiting on an opportunity to get in. Ward was steady and consistent but can you ever say Ward was ever the best receiver in the league in a given year?

Let us know in the comments if the sixth time is the charm for Ward.

BREAKING: 7 first-year eligible players are among the list of 26 Modern-Era Player Semifinalists for the Class of 2022.

After 8 years, David Baker is retiring as President of the Pro Football Hall of Fame 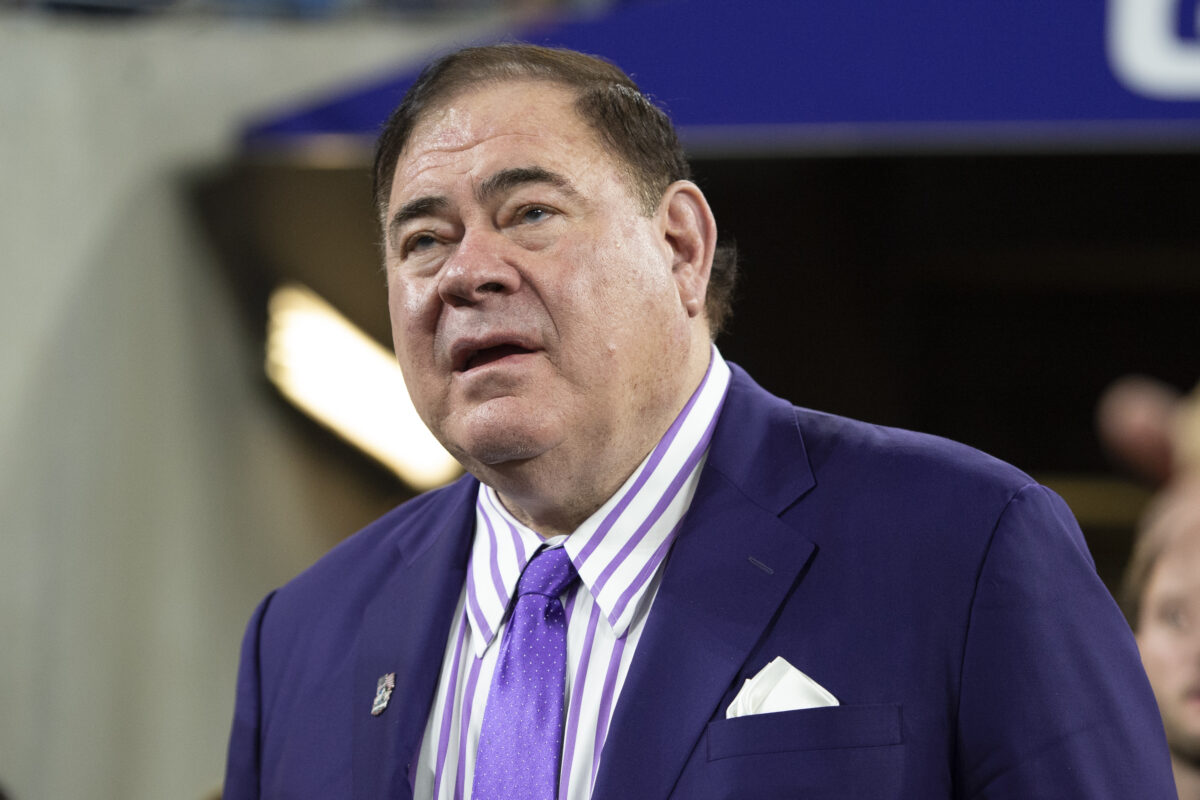 The familiar knock will have a different tone going forward when former players learn they have made it to the Pro Football Hall of Fame.

David Baker revealed on Saturday he will be leaving his position as President and Executive Director of the Canton, Oh, organization after 8 years.

According to the Hall of Fame release, Baker will continue to represent the Pro Football Hall of Fame at Ring of Excellence Ceremonies honoring members of the Centennial Class of 2020 and Class of 2021 at National Football League stadiums for the remainder of the presentation schedule as the retired President & Executive Director.

“As I approach the end of nearly eight years of service to the Pro Football Hall of Fame,” Baker said in a statement released by the Hall, “I have come to the conclusion that it is time for someone else to have the ‘best job in the world’ so I can still do a few more exciting things in my professional life while also returning home to our four children, 10 grandchildren and soon-to-be great grandson in Orange County, California, whom I’ve missed so much during my tenure at ‘The Most Inspiring Place on Earth.’ “

Jim Porter, the Hall of Fame’s Chief Marketing and Communications Officer, has been named President of the Pro Football Hall of Fame. 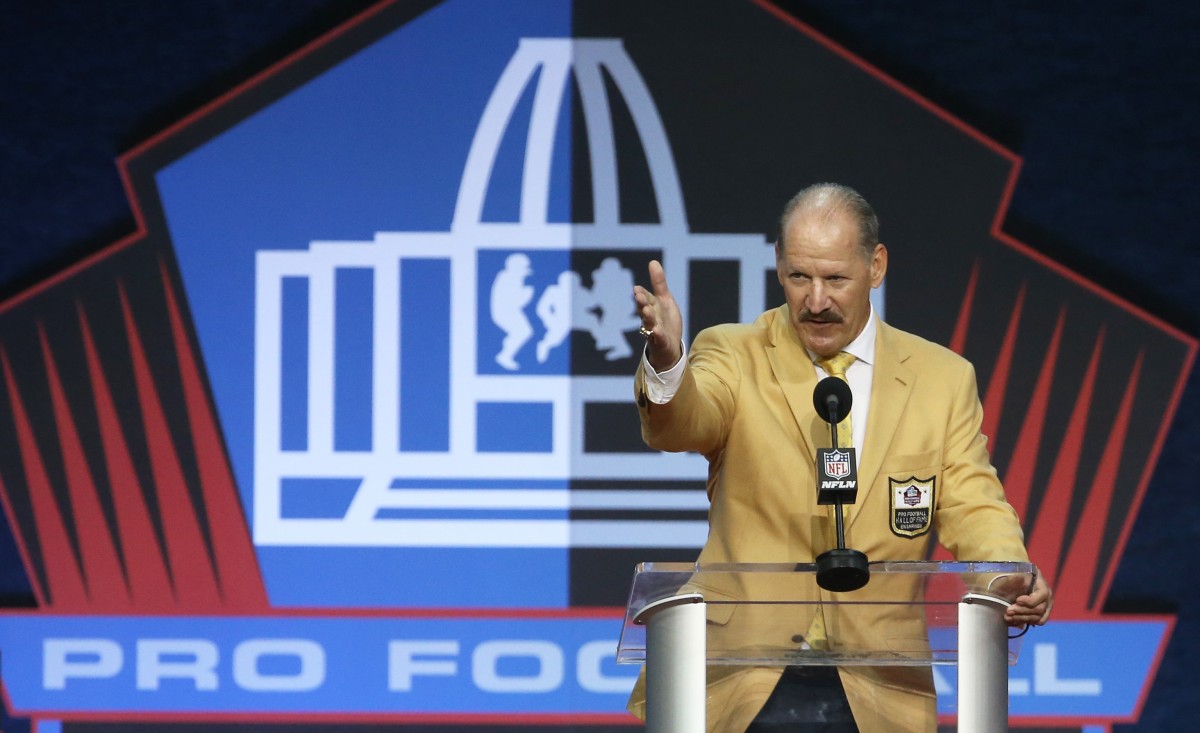 When former Pittsburgh Steelers head coach Bill Cowher thanked those who shaped him, he included both the Cleveland Browns and Philadephia Eagles organizations — the two teams Cowher played for before coaching.

With all of the Steelers fans in Canton, it was no surprise that a smattering of boos came over the crowd at the mere mention of the Cleveland Browns. “Oh, no, no, don’t go there. I have two kids that were born in Cleveland,” Cowher said with his signature smirk. 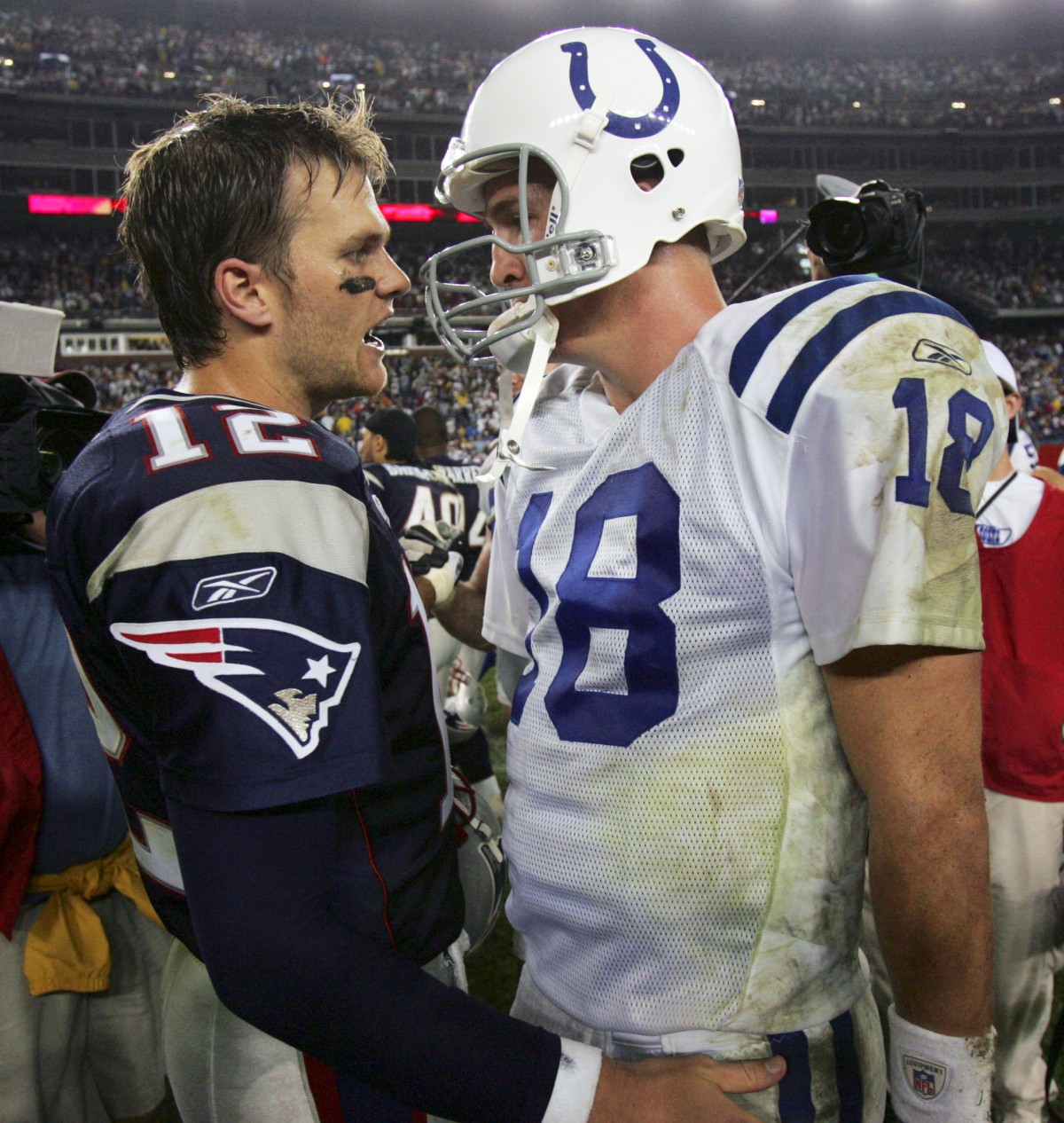 Peyton Manning will have a familiar face at his Hall of Fame induction ceremony on Sunday. Former rival and current Buccaneers quarterback Tom Brady will be in attendance.

Throughout Manning’s career, the two quarterbacks faced off in numerous AFC showdowns. Despite that, the two often displayed a friendship off the field which clearly still rings true with Brady showing his support this weekend.

Manning confirmed Brady will be there during the broadcast of the Hall of Fame preseason game on Thursday.

“Tom Brady is coming in, sitting in my section. I’m not sure how my Colts teammates will handle that,” Manning said. “But that means a lot that he’s taking the time.”

Brady has explained his pending appearance in Canton, Ohio. In the social media persona that Brady has dusted off since joining Twitter, Brady joked that he’s just going to make sure Manning doesn’t have second thoughts:

I just need to make sure he’s really done. Can’t risk this guy coming back… https://t.co/8afUVxicjO

Brady, who is looking to defend his Super Bowl title from last season, might have a sliver of seriousness in the back of his mind.

But in the postseason season, Manning has the 3-2 edge…