Texas 55 Colorado 23. The 10 ten things you need to know about the Texas win over Colorado in the Valero Alamo Bowl. 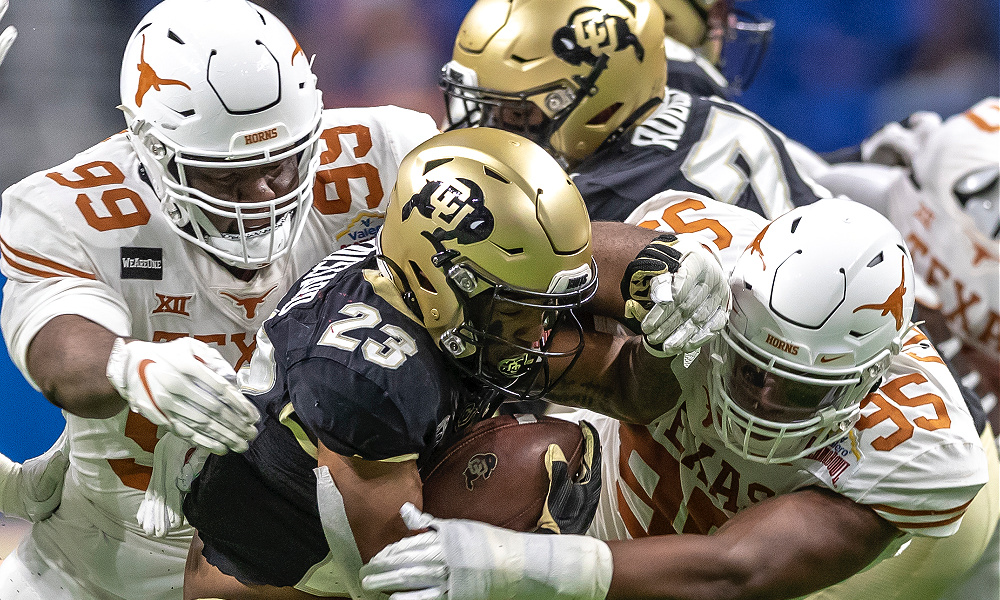 Texas 55 Colorado 23. The 10 ten things you need to know about the Texas win over Colorado in the Valero Alamo Bowl.

10. Some coaches just have this bowl thing down. It’s about having a little extra time to prep, it’s about getting your team to buy in, and it’s about … okay, there’s a little bit of luck and magic involved.

With Texas under Tom Herman, it’s also about having great players who seem to want to show up and play hard in these things. Herman is now 4-0 at Texas in bowls and 5-0 overall with the win over Florida State when he was in Houston. However …

9. These are the types of performances than drive the Texas base MENTAL. The team is so sharp, so good, so in command, that you know that it’s always there. You know that there are more of these performances in there each any every week, and you know the talent is there to be better in a mediocre Big 12. However …

8. Okay, why is Texas SO good in bowl games under Tom Herman?

7. Colorado shouldn’t be remembered this season for this performance. It was a good first run under head coach Karl Dorrell, the team was one of the top four in the Pac-12, and it found ways to win games with a bunch of interesting players to build around. In this ugly, rough season for everyone, going 4-2 and getting to the Alamo Bowl isn’t bad – Texas was just ON.

6. The Buffs are going to have to figure out their passing game. It was inconsistent during the season, it only hit on 58% of the passes, and there weren’t enough big plays down the field against anyone but Stanford. Sam Noyer only completed 8-of-23 passes for 101 yards and two picks.

Brendon Lewis gave it a shot and provided a spark with 73 rushing yards and a touchdown and completing 6-of-10 throws for 95 yards. The Buffs tried for the big plays, but there weren’t there.

5. The Texas coaching staff is in love with freshman defensive tackle Alfred Collins. He’s got NFL size, the freakish athleticism to be a franchise cornerstone to build around, and he moves line a next-level interior pass rusher who’s still just figuring it all out. There were a ton of big plays in this that will be remembered, but his fantastic interception will likely be the signature moment.

We're in the Matrix 🤯 pic.twitter.com/gqXvHoDJ2c

4. Texas always has guys. The defense was missing five starters, this wasn’t supposed to be its normal squad in terms of overall production, and yet the offense picked up the slack and the defense wasn’t that bad. It only gave up 378 yards, but it couldn’t handle …

3. Jared Broussard is really, really good. The Colorado running back isn’t all that big, but he did what he could with 82 yards and two touchdowns on 27 carries before hurting his shoulder. The Buff running game – helped by QB Brendon Lewis – wasn’t bad, but …

2. The Texas ground game was a blast. Bijan Robinson was a super-recruit for a reason, and he just jacked up the hype for 2021 with a 183-yard, one-touchdown day on just ten carries. He also caught two passes for 37 yards and two touchdowns, but the running game set the tone with 303 yards averaging over eight yards per pop. And then there was ….

1. The Texas passing attack dominated no matter who was in there. Sam Ehlinger hit 10-of-16 passes for 160 yards and a touchdown, but he was out at halftime with a shoulder injury. No problem … Casey Thomson stepped up. The sophomore connected on 8-of-10 passes for 170 yards and four touchdowns as the offense actually improved as the game went on.