Bradshaw teamed up with Schlotzsky’s restaurants to create the Train for a Mouthful regimen. 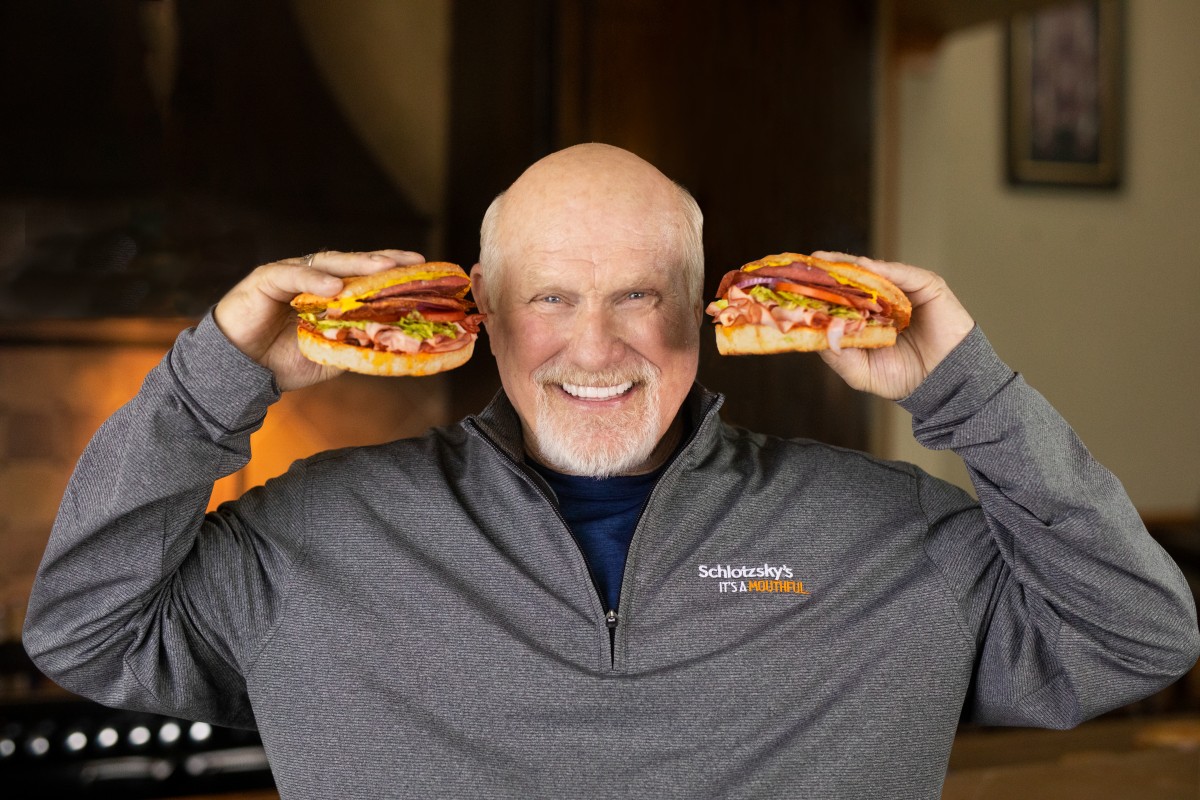 Between the Pittsburgh Steelers drafting Terry Bradshaw first overall and leading the Steelers to a string of Super Bowl wins, was another pivotal moment in American history. Schlotzsky’s, a fast-casual restaurant franchise, came on the scene in 1971.

A lot has changed with the Steelers since the ’70s. They’ve twice added to their trophy display case, and their former quarterback gets paid to talk football instead of throwing it.

But Bradshaw remains a Steelers hero. And The Original remains Schlotzsky’s hero.

The Original, a favorite of Bradshaw’s, has 13 unique ingredients, including lean smoked ham with Genoa and Cotto salamis, three different kinds of cheese, and more, served on our toasted house-made sourdough bun (Bradshaw likes to add jalapenos).

So it was a no-brainer for Schlotzsky’s and Bradshaw to collaborate on their “It’s a Mouthful” campaign.

“It’s no secret that I always have a mouthful to say, so when the opportunity came up to help Schlotzsky’s fans train their mouths, I couldn’t say no,” said Bradshaw. “My family and I have been eating Schlotzsky’s sandwiches for years, so any workout where I can enjoy my go-to – The Original with jalapenos – is a workout made just for me.”

Bradshaw says there’s a Schlotzsky’s location eight miles from where he lives in Oklahoma and he and his wife Tammy go “at least” once a week.

Because of all of the additional meat piled on, Bradshaw and Schlotzsky’s developed a new line of mouth muscle-moving exercises called “Train for a Mouthful.”

“It’s been a stressful year, and we can all use a little bit of fun these days. That is why we’re excited to team up with sports legend Terry Bradshaw to create the Train for a Mouthful regimen,” said Tory Bartlett, chief brand officer at Schlotzsky’s.

Bartlett says the regimen provides customers with an engaging way to prepare for and enjoy Schlotzsky’s new, meatier sandwiches.

The routine consists of three exercises – The Breadlift, The Chew Chew and The Stacks on Deck – all to help prepare you for a mouthful of sandwich:

The best part is, the workout can be any one of Schlotzsky’s 11 mouth-watering creations because each now has 30 percent more meat.

So, instead of doing the usual pizza for the NFL draft, get Schlotzsky’s delivered. Any lucky residents in these fine Schlotzsky’s states can take advantage of the “Bradshaw BOGO,” where guests who buy a medium sandwich get one free. The promotion is being offered all draft-long and continues through Sunday, May 2. Just download the Schlotzsky’s app to redeem this offer.

Bradshaw had a love for football, so he played it. Bradshaw also had a love of bourbon, so he brewed it.

And it goes great with meat.

Bradshaw Bourbon can be found at your local retailer or online.