Champagne (usually Moët & Chandon), goggles and cigars – all things that you can usually spot in a typical locker-room celebration following the crowning of a new NBA champion. With Stephen Curry, Klay Thompson and the Golden State Warriors locking … 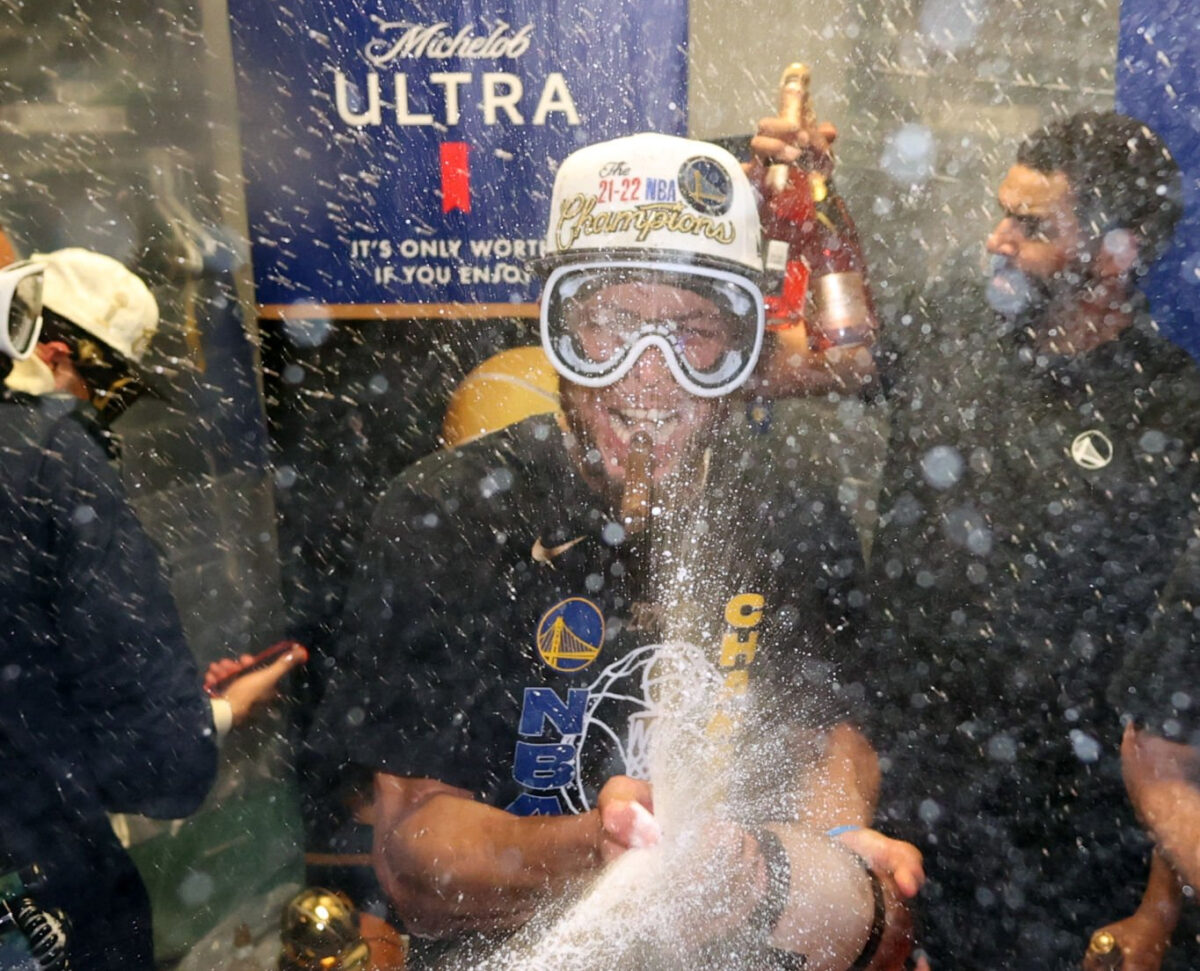 Champagne (usually Moët & Chandon), goggles and cigars – all things that you can usually spot in a typical locker-room celebration following the crowning of a new NBA champion.

With Stephen Curry, Klay Thompson and the Golden State Warriors locking up their 7th title as a franchise on Thursday, we decided to put together a gallery of every locker-room celebration we could find.

We even went as far back as the early 1960s for Boston Celtics and Philadelphia 76ers celebrations after winning championships.

Check it out below.

We present the youngest players in league history to win an NBA title. Some had more focal roles than others. 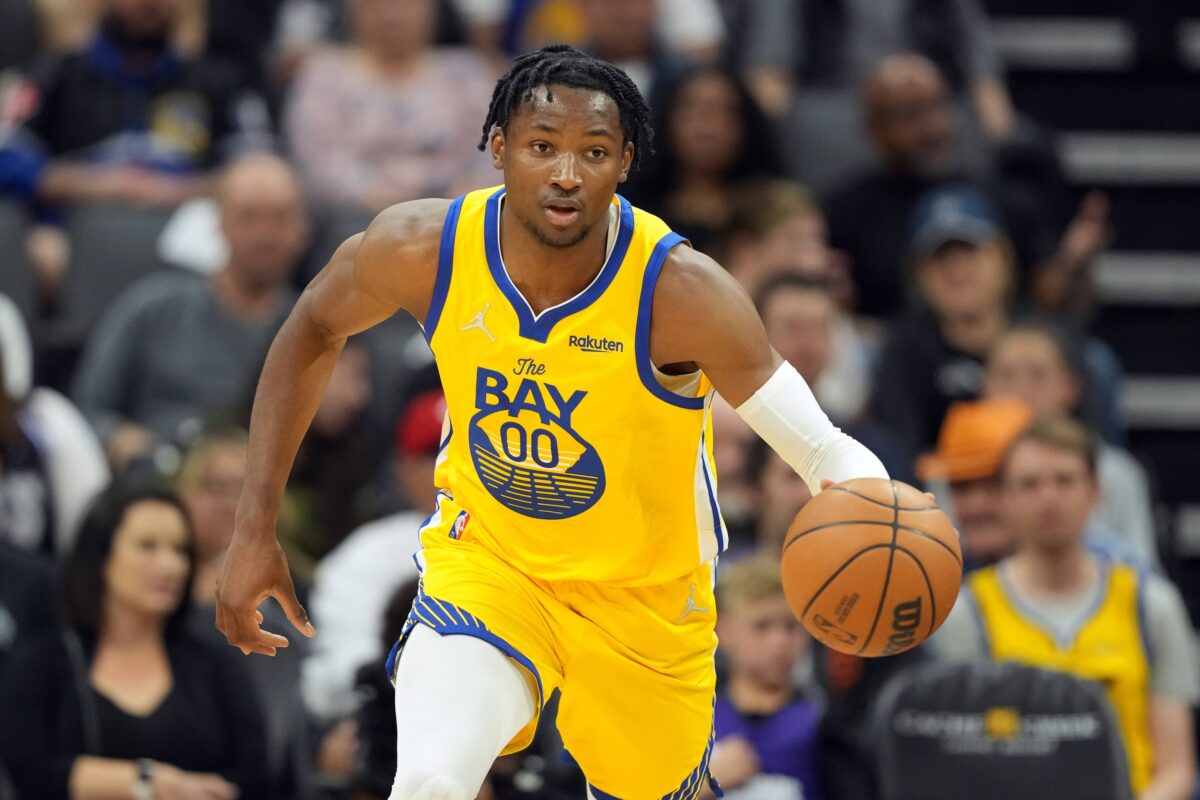 Often times, NBA teams with championship expectations litter their rotations and starting lineups with veteran pieces who have playoff experience, as those are the types of players who know what it takes to succeed in the postseason.

There are, of course, exceptions to that rule.

Some young players in the Association figure things out quickly and manage to play some of their best basketball when the stakes get higher come playoff time.

Below, we present the youngest players in league history to win an NBA title. Some had more focal roles than others, but even so, an impressive accomplishment for the following guys.

More than ever, the NBA has become an international game over the past couple of decades. Superstar players like Dirk Nowitzki, Giannis Antetokounmpo and Luka Doncic are sprouting up from all over the world and dominating the formerly … 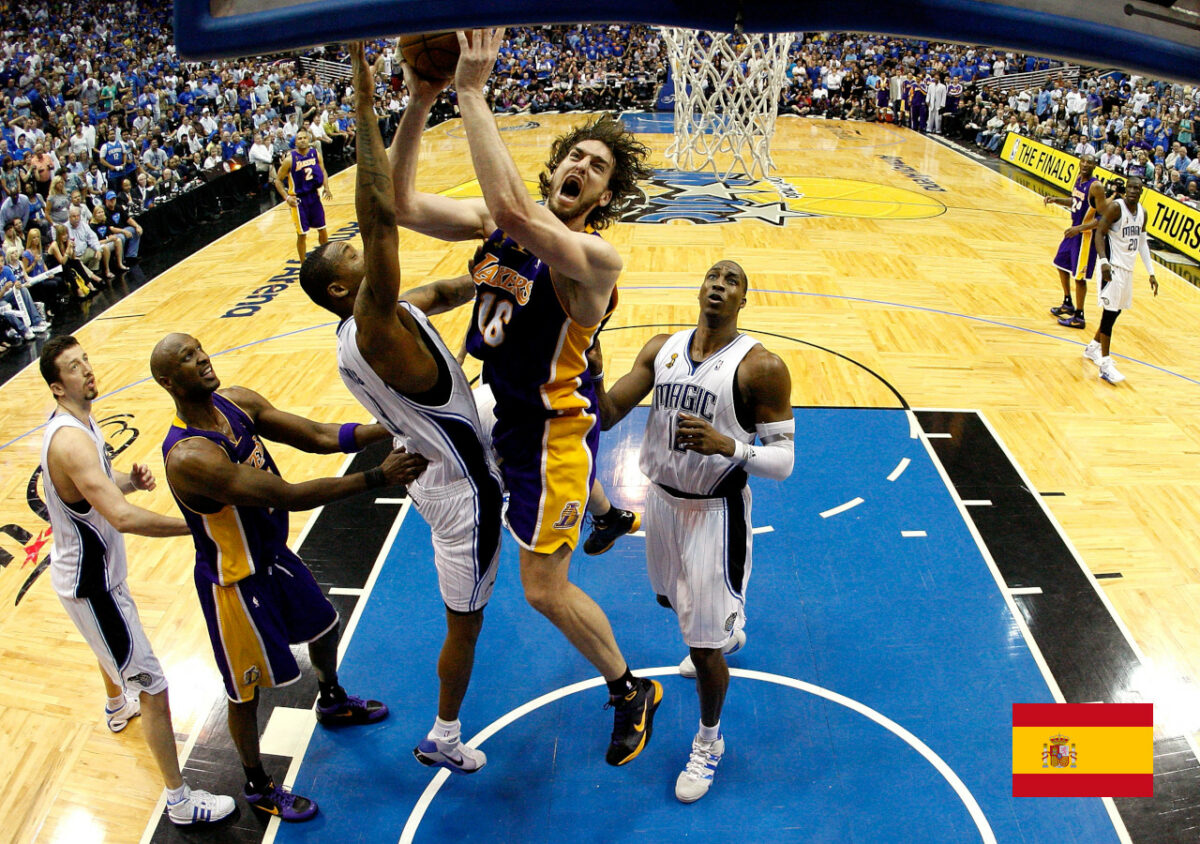 More than ever, the NBA has become an international game over the past couple of decades.

Superstar players like Dirk Nowitzki, Giannis Antetokounmpo and Luka Doncic are sprouting up from all over the world and dominating the formerly American-driven league at levels previously unforeseen.

As such, the league has seen NBA champions from countries all over the world, from Greece to the Republic of Congo to Germany to Great Britain to Brazil and Argentina – and so many more.

Below, you can check out the first NBA champion from each country in this gallery we put together.

Young players typically don’t get minutes in the playoffs, but sometimes, they earn them, even on a stage as grand as the NBA Finals. Other times, young players get minutes in garbage time. That was the case this year with Jonathan Kuminga and Moses … 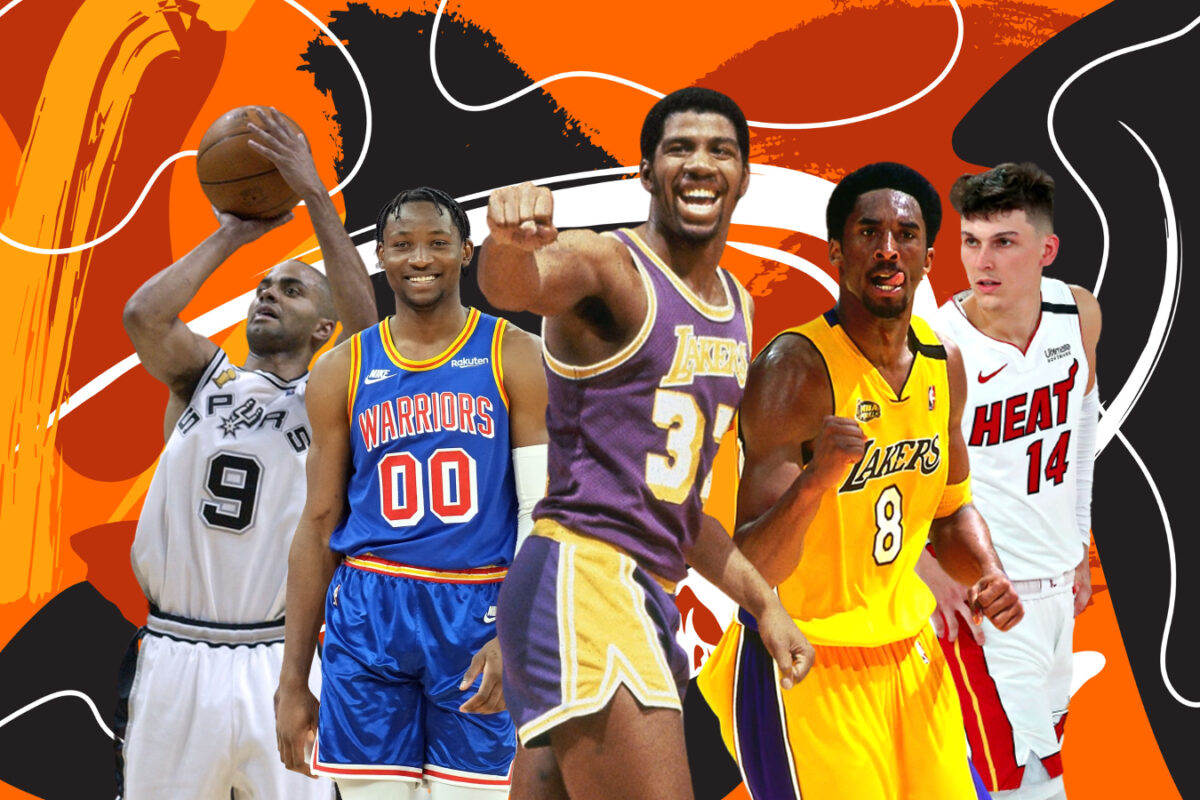 That was the case this year with Jonathan Kuminga and Moses Moody, as both young Golden State Warriors players got playing time in the series against the Boston Celtics, making them the third- and fourth-youngest players in NBA Finals history.

The ranking is led by Darko Milicic and is mostly full of guys with minor roles in the Finals like Milicic, Kuminga and Moody (so far), but you also have some guys who had major roles, like Tony Parker in 2003, Tyler Herro in 2020 and, memorably, Kobe Bryant in 2000.

The legendary Magic Johnson won that accolade in 1980 after averaging 21.5 points, 11.2 rebounds, 8.7 assists and 2.7 steals in a six-game championship win for the Los Angeles Lakers, stats he put up… as a 20-year-old.

Check out the full rankings below.

(The ages listed are for their first game in the NBA Finals).

HoopsHype presents the NBA players with the most career playoff games under their belt without reaching the Finals. 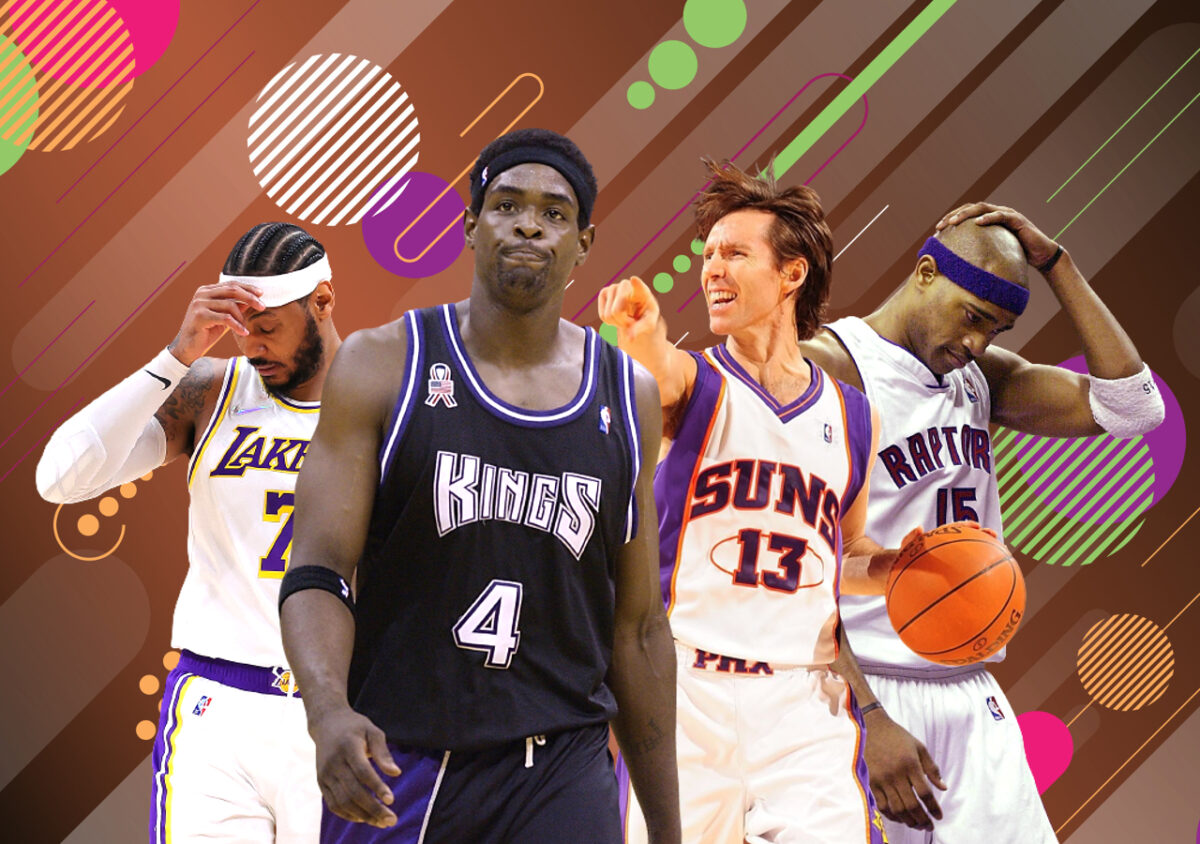 With Al Horford finally getting himself off of the list recently, we decided to take a look at the other NBA players who have played in the most playoff games without reaching the Finals, a dubious distinction to hold indeed.

Led by Paul Millsap now with 130 career playoff games and no Finals appearances, this list features various all-time greats who simply had some bad luck in the postseason.

Others on this list include Steve Nash, Joe Johnson and Paul George.

The Bill Russell NBA Finals MVP award is one of the most prestigious of the sport of basketball. As such, when a player receives the distinction, it’s a huge honor, one that takes their legacy to another level. After watching Giannis Antetokounmpo … The Bill Russell NBA Finals MVP award is one of the most prestigious of the sport of basketball. As such, when a player receives the distinction, it’s a huge honor, one that takes their legacy to another level.

After watching Giannis Antetokounmpo take home the first Finals MVP award of his career, though perhaps not the last, we decided to put together a gallery showing NBA legends throughout the years receiving their Finals MVP trophies.

Check it out below.

HoopsHype breaks down the seven biggest reasons why the Milwaukee Bucks reign as champions for the 2020-21 NBA season. 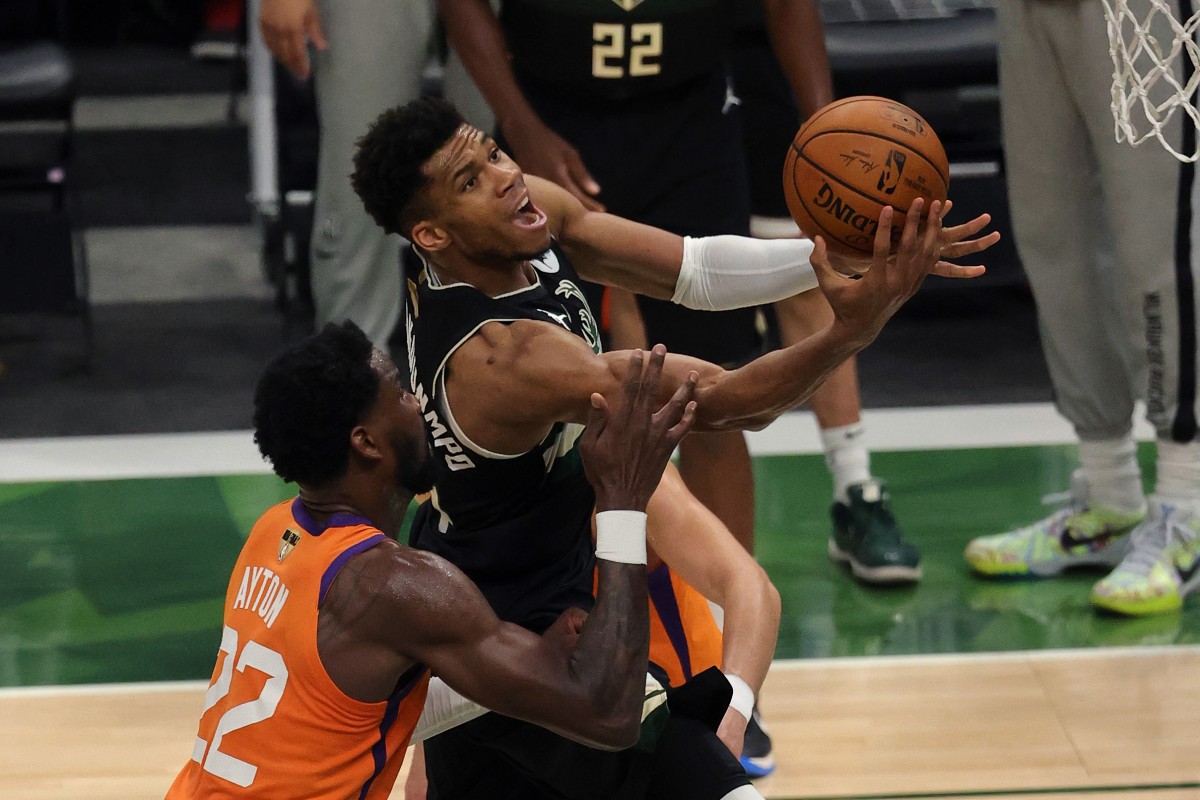 After defeating the Phoenix Suns in Game 6 of the 2020-21 NBA Finals, the Milwaukee Bucks were crowned this year’s champions, the first time we’ve been able to say that since 1970-71, a 50-year drought that finally saw championship rain fall again in Milwaukee.

This year’s Bucks will be remembered for a multiude of reasons, including their defense, resiliency and tough play down low, as well as for their championship superstar, Giannis Antetokounmpo, dominating his way to the first Finals MVP award of his career.

Below, we break down the seven biggest reasons why the Bucks are 2020-21 champions.

Who has the most points + rebounds + assists + steals + blocks in NBA Finals history? 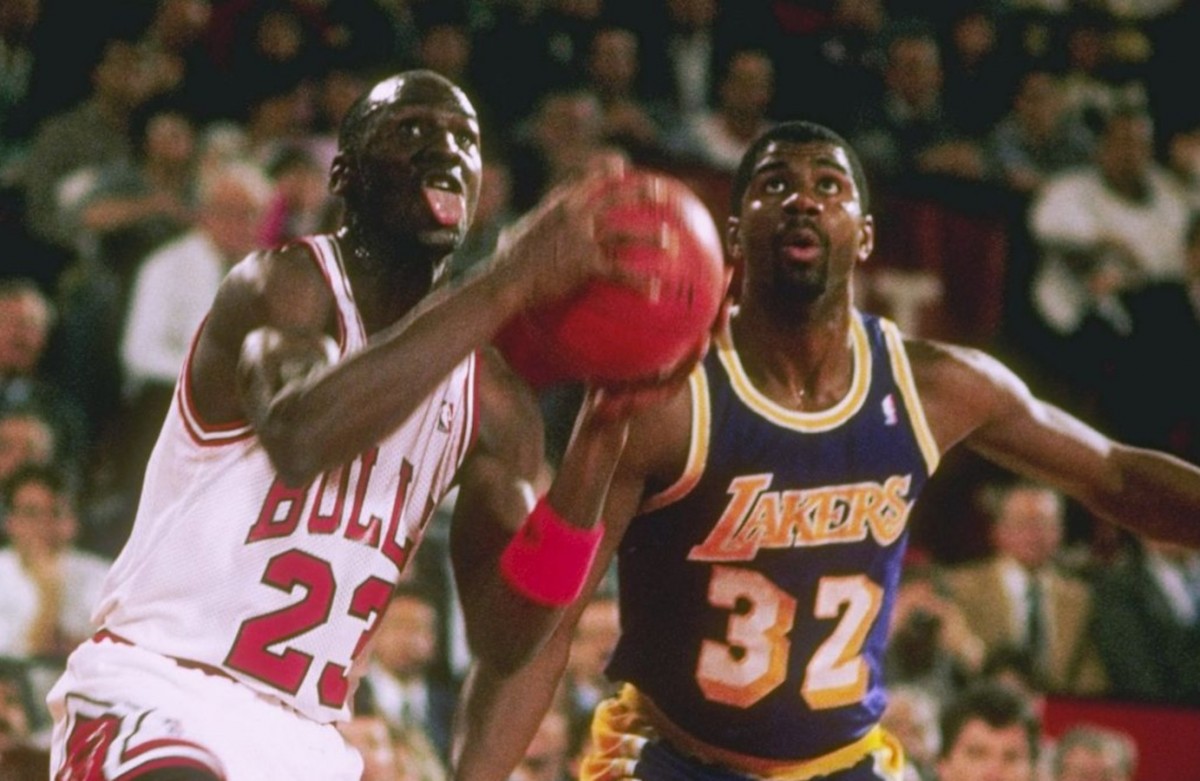 Who has the most points + rebounds + assists + steals + blocks in NBA Finals history?

LeBron James isn’t No. 1… but he could get there.

Based on opponent records, the Los Angeles Lakers just had the easiest path to a title since 1985-86. 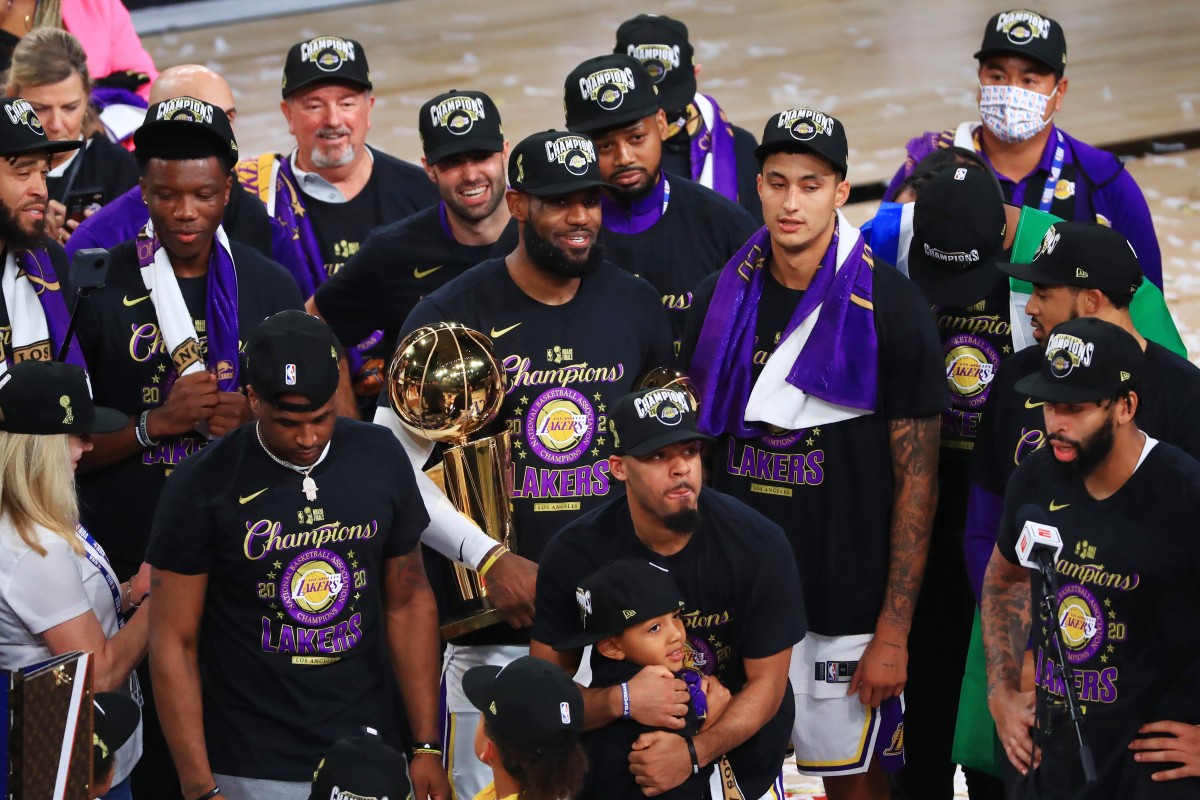 By defeating the Miami Heat in the 2020 NBA Finals, the Los Angeles Lakers won the 17th title as a franchise, tying them with the Boston Celtics for the most in NBA history.

It was a tremendous accomplishment for Los Angeles, particularly with what a difficult season it’s been for everyone, one that will be looked back on fondly for years to come.

On the other hand, as the league’s most prominent franchise, the Lakers will always have their fair share of haters. And the haters won’t have to look far this year for a talking point to use against L.A.’s main team and their latest trophy.

That’s because, according to our research, with a combined opponent regular-season win percentage of 57.9 percent, the Lakers just had the easiest path to a championship since the 1985-86 Celtics. 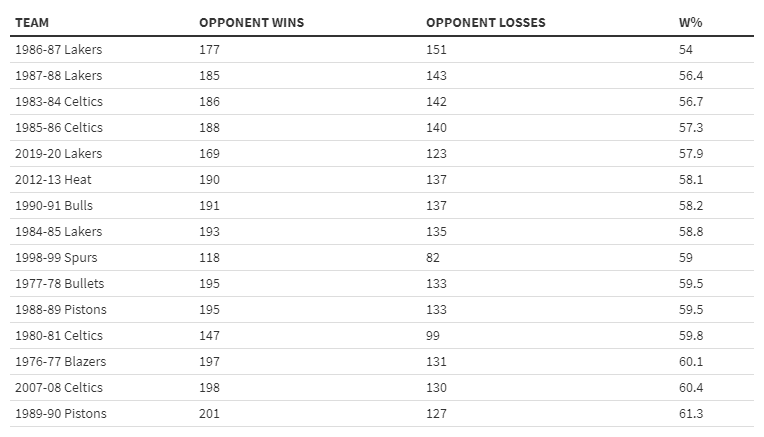 Overall, Los Angeles’ title run was 17th “easiest” ever based on opponent regular-season win rate, and the fifth easiest since the NBA-ABA merger in 1976, which many consider the start to the modern era of professional basketball in America.

At the same time, it’s not Los Angeles’ fault they had such a seemingly “easy” rode to a title; they just beat whoever was in front of them and did so with aplomb in a rather dominant fashion.

Faced off with a hot Portland Trail Blazers team in Round 1, who had won seven of their previous nine games prior to the playoffs, the Lakers dropped just Game 1 before ending the series in five.

In the Western Conference semifinals, Los Angeles again dropped Game 1, this time against the Houston Rockets, before winning the next four contests by an average margin of victory of 12.8 points.

Against the Denver Nuggets in the Western Conference Finals, the Lakers ended the series 4-1, dropping just Game 3, pretty convincingly winning the rest of the series.

And in the 2020 NBA Finals, L.A. faced a Miami Heat team that finished fifth in the East in the regular season and was not expected to be a Finals-caliber squad. Despite a solid effort out of Miami, the Lakers were still able to win their 17th title following a 4-2 defeat of the Heat.

No title run is “easy”, but the Lakers certainly did not have the toughest path in being crowned the 2019-20 champions.

LeBron James made even more history this season by becoming the first player to win Finals MVP with three separate teams. 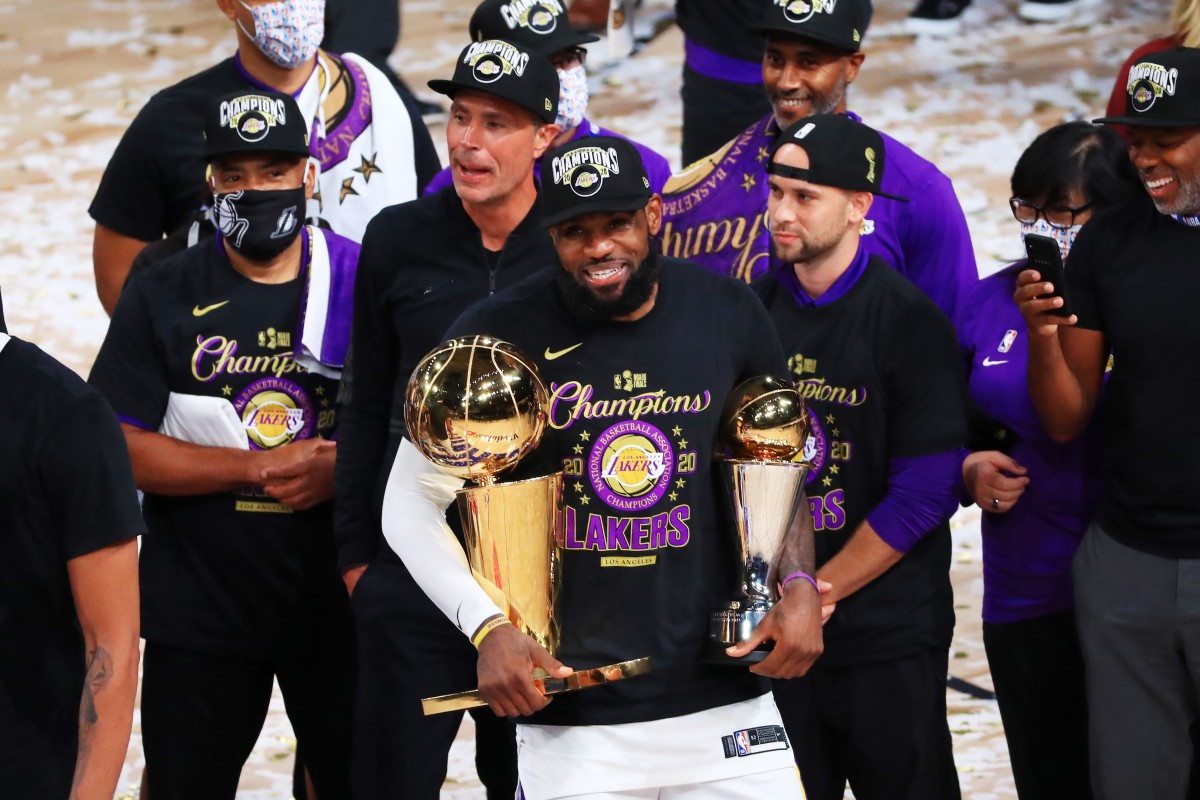 The accolades continue to pile up for Los Angeles Lakers superstar LeBron James.

Along with winning the fourth championship of his career this year, his first with L.A., James became just the fourth NBA player ever to win a championship with three different teams. On that list with him are his teammate Danny Green, as well as Robert Horry and John Salley.

As if that wasn’t enough, James also became the first player in NBA history to win Finals MVP with three different teams, an absolutely insane accomplishment and one that many will use in his favor when discussing the ever-contentious GOAT debate between he and Michael Jordan. 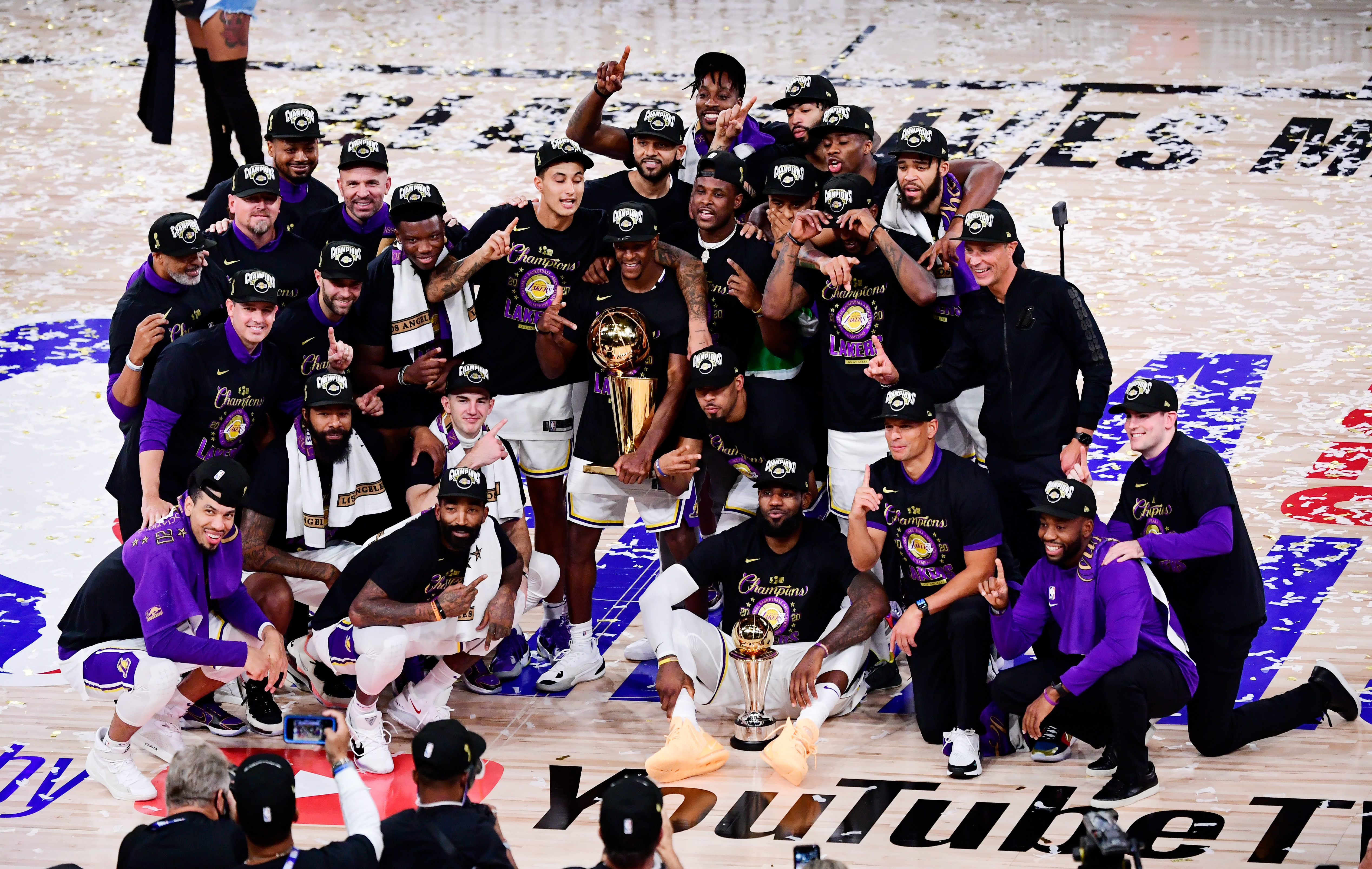 Of course, one could argue that the reason James won Finals MVP with three different teams is due to the fact that he jumped from franchise to franchise throughout his prime in an effort to join teams that gave him the best chance to be in championship contention every year, but that’s neither here nor there.

James averaged 29.8 ppg, 11.8 rpg, 8.5 apg, 59.1 FG% and 41.7 3P% in the 2020 NBA Finals, and was spectacular throughout, controlling games from start to finish and putting the pesky Miami Heat away before they could make the series competitive.

However, no one else has been able to do it with three different teams, and unless Leonard can do it with the Clippers in the upcoming years, it’ll be a long time before anyone can match that record.

James is truly in a league of his own when it comes to historic accolades.