With the 2020 NFL Combine ongoing, the good people over at Pro Football Focus released a new mock draft. For the Jacksonville Jaguars, they found themselves with two Southeastern Conference standouts in round one, as they were slotted Javon Kinlaw … 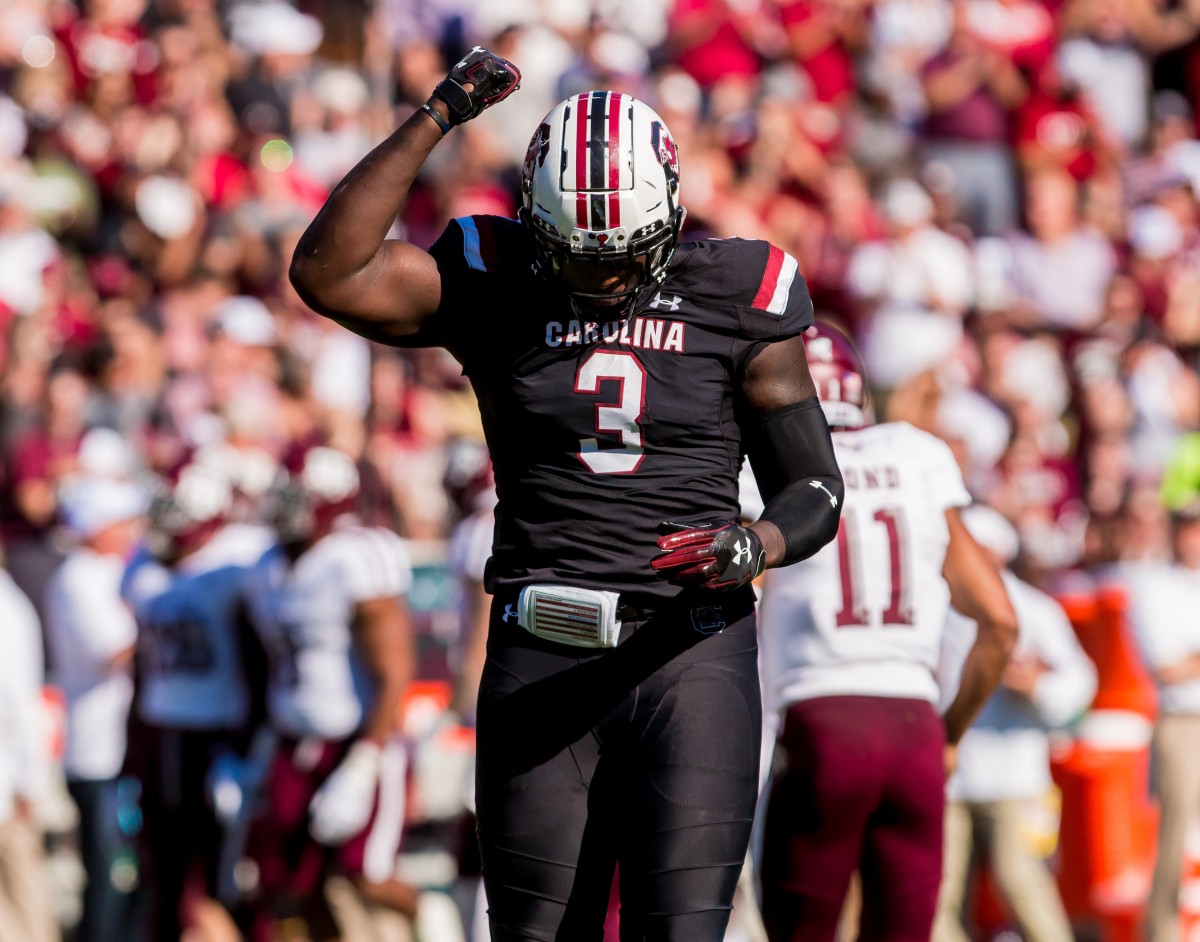 With the 2020 NFL Combine ongoing, the good people over at Pro Football Focus released a new mock draft.

For the Jacksonville Jaguars, they found themselves with two Southeastern Conference standouts in round one, as they were slotted Javon Kinlaw of South Carolina and Xavier McKinney of Alabama.

At 6-foot-5, 315 pounds, Kinlaw possesses elite size and length for the defensive tackle position. He is a bit raw from a technique standpoint, but he still managed to produce at a high level against SEC competition in each of the past two seasons. He earned PFF pass-rushing grades above 88.0 in 2018 and 2019.

There’s an argument for pushing McKinney ahead of Delpit as the class’ best safety considering just how productive and versatile he was at Alabama. His overall grade and PFF coverage grade improved every year of his collegiate career, and he earned an impressive 88.4 overall grade and an 89.2 PFF coverage grade in 2019. He also logged over 500 defensive snaps played at free safety, box safety and slot cornerback over the past two seasons with the Crimson Tide.

Kinlaw is a name familiar too Jags fans because he’s been heavily associated with them since the Senior Bowl where he balled out. There wasn’t really much the offensive linemen in Mobile could do with him and his stock rose as a result.

McKinney, on the other hand, is a name who really hasn’t been tied to the Jags being that safety isn’t as big of a need as several other positions. That said, the Jags may be better off using their No. 20 selection on a receiver, linebacker, or offensive lineman.

If they did pull the trigger on McKinney, however, it would reunite him with former Crimson Tide teammate Ronnie Harrison, who will enter the season as the starter at safety alongside Jarrod Wilson. In terms of his skillset, scouts really like McKinney’s versatility and football IQ. Clearly, based on his PFF scores, he’s solid in coverage, too.

While at Alabama, McKinney participated in 32 games. In 2019, he was named a first-team member of the all SEC team after registering 59 tackles on the season. 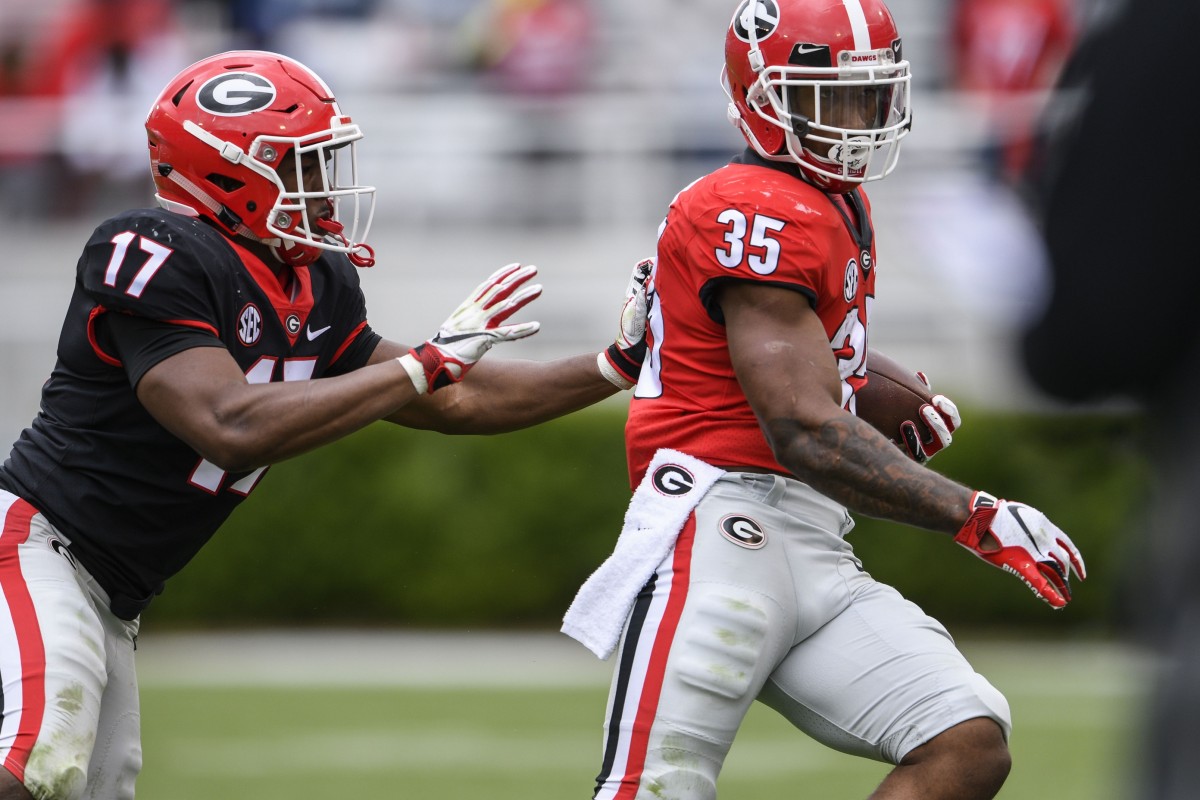 For those who can’t focus the ideal amount of attention to Georgia football news, I’ll compile some of this week’s posts pertaining to former Bulldogs at the NFL Scouting Combine:

Charlie Woerner is a man among boys.

The basketball Bulldogs stuck out a nervous victory over Arkansas sealed by an Anthony Edwards dunk.

The baseball Bulldogs embarrassed Georgia Tech in Atlanta. Fewer than twenty hours prior, Scott Stricklin’s Bulldogs edged out the Yellow Jackets by a score of six to five. 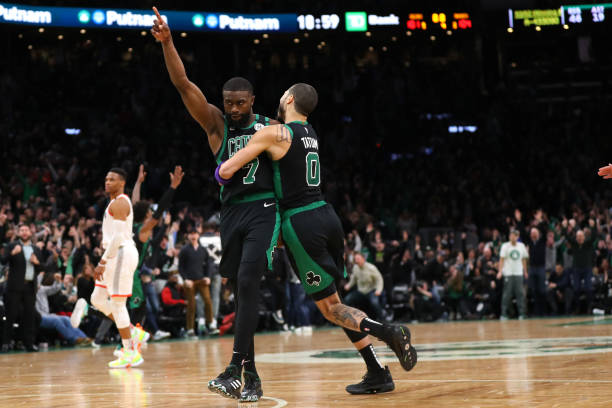 Boston Celtics shooting guard Jaylen Brown very nearly pulled off the upset of the season sending the game into overtime after teammate Jayson Tatum intentionally missed his first free throw in the waning seconds of regulation against the Houston Rockets.

Though Boston would go on to be edged by Houston as Harden hit clutch free throws at the end of the extra period, the brilliance displayed by the Jay Team to nearly steal the win is worth another watch if you’ve seen it, and plenty more if you didn’t.

Bouncing the ball back at his teammates after Rockets “big man” P.J. Tucker fouled the Duke product in an effort to prevent the Celtics from tying the game on that possession backfired spectacularly as the duo snatched defeat from the jaws of victory for five more minutes.

JAYLEN SENDS IT TO OT!!! pic.twitter.com/E5SMOss32I

Watch the video above as Brown manages to sink an awkward, last-second trey to force the overtime, and try to think more about what the pair will do in the postseason more than the one that got away.

Kyler Phillips and Gabriel Silva had a combined one previous UFC fight between them, but that didn’t stop them from taking home postfight bonuses. 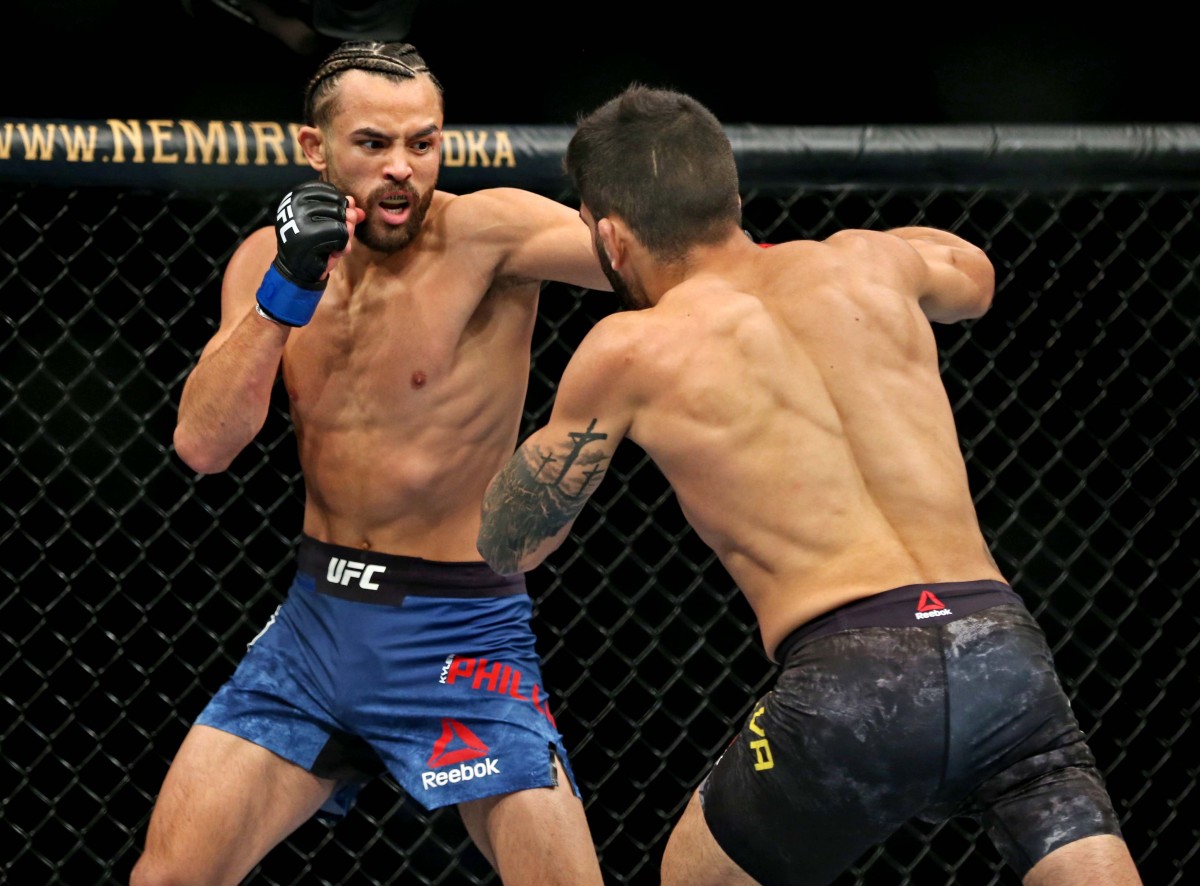 If you didn’t know the names [autotag]Kyler Phillips[/autotag] and [autotag]Gabriel Silva[/autotag] before UFC on ESPN+ 27, you should commit them to memory now.

The bantamweights had a combined one career UFC fight between them heading into Saturday night’s show in Norfolk, Va. But UFC post-fight bonuses are eligible to everyone on the card, and Phillips and Silva once again proved the bonus system to be egalitarian.

The duo put on an exciting scrap, and while the debuting Phillips earned across-the-board scores for his performance, Silva showed plenty of heart and tenacity in defeat.

And that was enough to earn both competitors $50,000 “Fight of the Night” bonuses.

Meanwhile, two fighters put in strong efforts to earn themselves “Performance of the Night” awards in [autotag]Megan Anderson[/autotag] and [autotag]Jordan Griffin[/autotag].

Anderson stated her case for a shot at featherweight champion Amanda Nunes with a first-round knockout of Norma Dumont. Griffin had a second-round submission finish.

It was the first career UFC post-fight bonuses for all four competitors.

Deiveson Figueiredo talks to media after his UFC on ESPN+ 27 victory.

Deiveson Figueiredo talks to media after his UFC on ESPN+ 27 victory.

The Boston Celtics and Houston Rockets battled each other to a near-standstill for four quarters and almost all of an overtime period, but the Rockets would come away with the win by the thinnest of margins, winning 111-110. 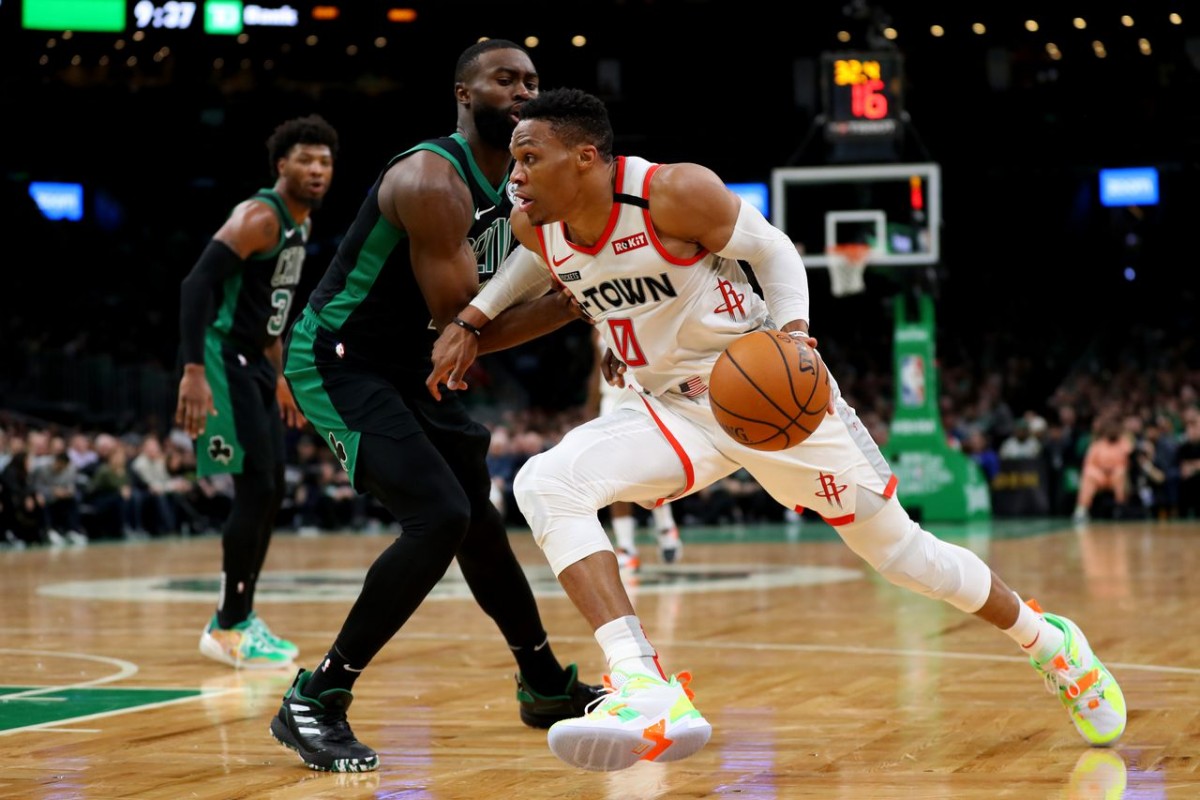 The Boston Celtics and Houston Rockets came into their Leap Day rematch as two of the hottest teams in the NBA.

Would the Rockets repeat as victors with their ultra-small, high-octane lineup? Or would the emergence of third-year wing Jayson Tatum as one of the league’s best players since the Feb. 11 loss to Houston?

Boston won the tip, and scored first with a Jaylen Brown layup followed by a Tatum block on the other end. The Rockets stayed close early, but Marcus Smart’s and Brown’s aggressive play kept Houston at bay, even building a 28-19 lead to end the first quarter.

Guard Russell Westbrook began to heat up early in the second frame, but so did Tatum, pushing the lead to 37-23 with 9:30 left in the half.

Boston would push the lead as high as 14 before James Harden started to get in rhythm as well, cutting the lead to eight before Westbrook undercut Smart and earned a flagrant-1 for his efforts.

The half would end on a Harden drive to the basket expertly blocked by center Daniel Theis, sending the Houston star sprawling and the Celtics into the break up 56-45.

The third frame began with a trip for Brown to the charity stripe, converting one, but the Rockets would soon cut the lead to 59-52 on a Robert Covington trey, and a three-point game on a PJ Tucker 3-pointer with just under eight minutes remaining in the penultimate frame.

Rockets had 7 turnovers in the first quarter but just 4 since. Celtics have been slow to the ball, looking like tired legs.

Harden would retake the lead for the Rockets with another trey at roughly the six-minute mark, but Brown would take right back with a three of his own.

Boston and Houston traded buckets for the rest of the third quarter, the Rockets coming out on top 81-78 to start the game’s final frame.

The fourth quarter began like the third, but with reserve guard Brad Wanamaker making a trip to the line to cut the lead to one before Tatum would draw a flagrant for extending his leg shooting, hitting guard Eric Gordon in the nether regions and pushing Houston to an 85-80 lead.

Boston would weather the storm, and Tatum would tie it back up at 87 with just under eight minutes to go, forcing a Rockets time out.

The Rockets looked like they’d sneak out of the Garden with a win after making a few key late buckets, but a last-second trey on a broken play by Brown would send the game to overtime with a 104-up tie.

The two juggernauts would continue to trade body blows in the extra period, coming down to the final seconds. Houston would edge Boston 111-110, which saw Harden win it at the charity stripe with just seconds left to play.

While it was an unfortunate ending to one of the best games of the season, that Boston was nearly able to steal the win despite going ice-cold in the fourth quarter bodes well for the future.

With a healthy Kemba Walker back in the fold, this team may be able to beat any team in the league.

The Boston Celtics next face the Brooklyn Nets at TD Garden on Tuesday, March 3rd at 7:30pm ET. 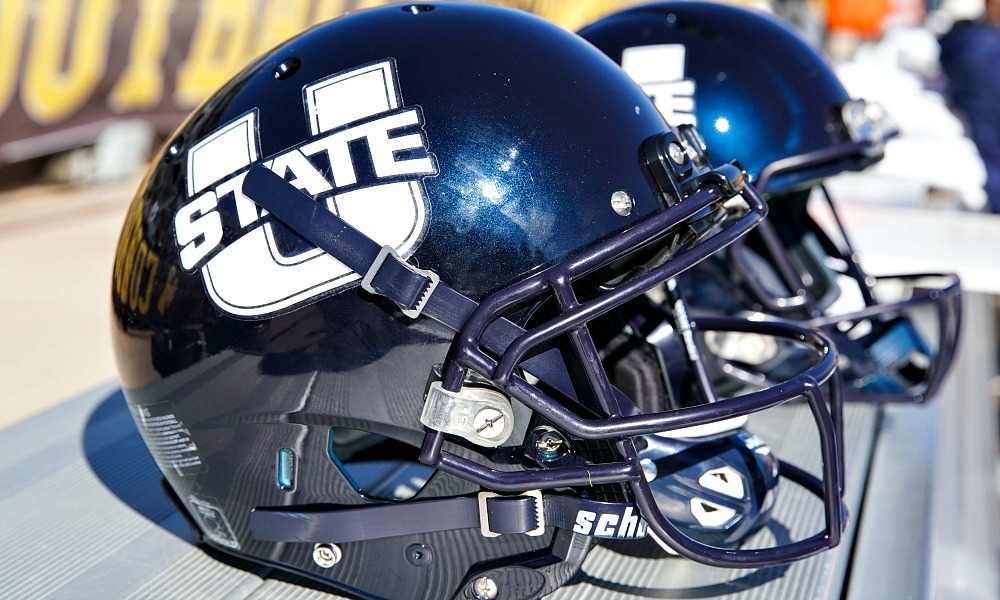 9-3: The Aggies come out strong with a home win over a new era Washington State team, but they’re more excited about a road win over BYU. A win over San Diego State kicks off the Mountain West with a good start, and they win two of the three road games against Boise State, Nevada and Wyoming. They roll through the last three weeks and take the Mountain Division.

5-7: Utah State loses to Wazzu to kick things off, and then has massive issues on the road. It drops the road dates to BYU, Boise State, and against either Nevada or Wyoming. A loss to San Diego State makes things even worse, and it sputters in the final few weeks for a losing season.

Get Utah State Tickets for the 2020 season with TicketCity

2020 preseason ranking of the Utah State football schedule from the hardest-looking games to the easiest.

With a fat dinger and a subsequent bat flip, Georgia’s Tucker Bradley sank the hopes of in-state rival Georgia Tech. 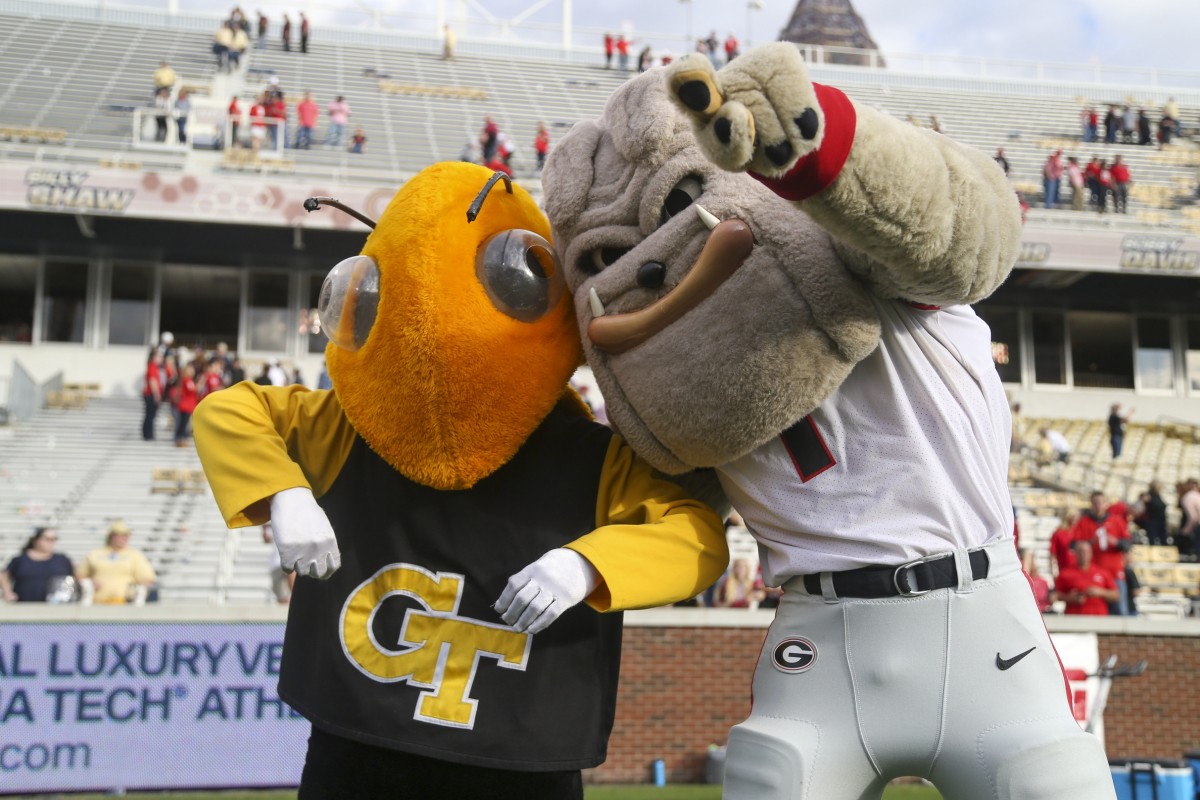 With a fat dinger and a subsequent (and well-earned) bat flip, Georgia’s Tucker Bradley sank the hopes of in-state rival Georgia Tech.

His sixth home run of the still-young 2020 college baseball season places him atop the list of the Southeasten Conference’s home run hitters.

Bulldog Garrett Blaylock is close to the top with four home runs.

In the previous matchup, Georgia outlasted Georgia Tech in the series opener by a score of 6-5 at Foley Field.

As part of a neutral series between in-state foes, the three-game stand features one game at Georgia’s Foley Field, another at Tech’s stadium at 255 Ferst Drive in Atlanta, and a third contest at Coolray Field, the home of Atlanta Braves AAA affiliate Gwinnett Stripers. 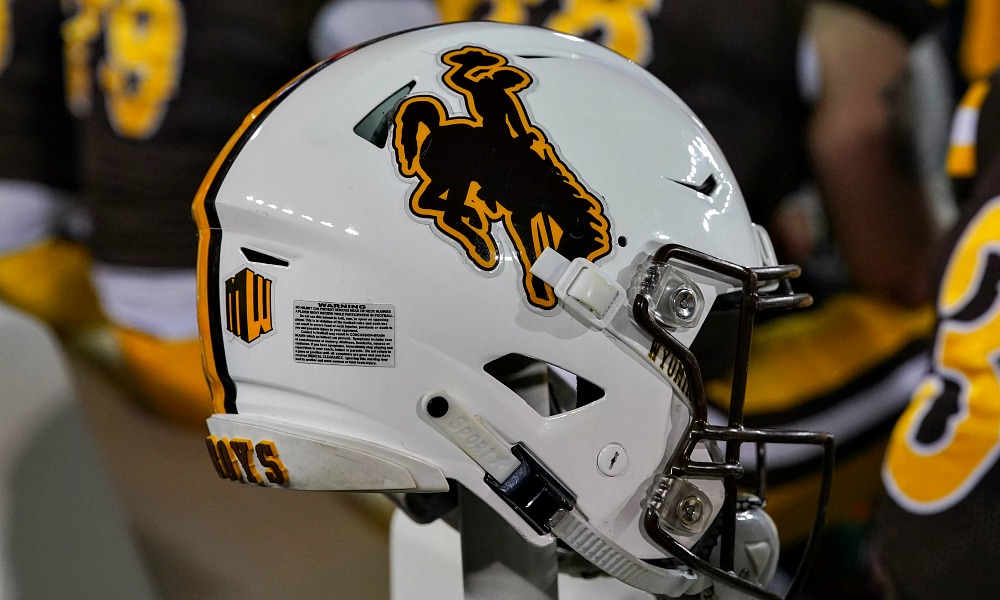 9-3: The Cowboys survive a dangerous game at Louisiana and shock Utah in an ugly – but effective – win on the way to a big start. They become a national thing by mi-October, but they drop a game or two at home – like against San Diego Stat and at Nevada – but beat Boise State to win the Mountain Division.

5-7: UW loses at Louisiana, gets dumped by Utah, and loses one of the two games against UNLV and Ball State before losing to San Diego State. It’s a rough run over the second half of the season with tough loss after tough loss before cementing a losing season with a loss to Boise State.

Get Wyoming Tickets for the 2020 season with TicketCity

2020 preseason ranking of the Wyoming football schedule from the hardest-looking games to the easiest. 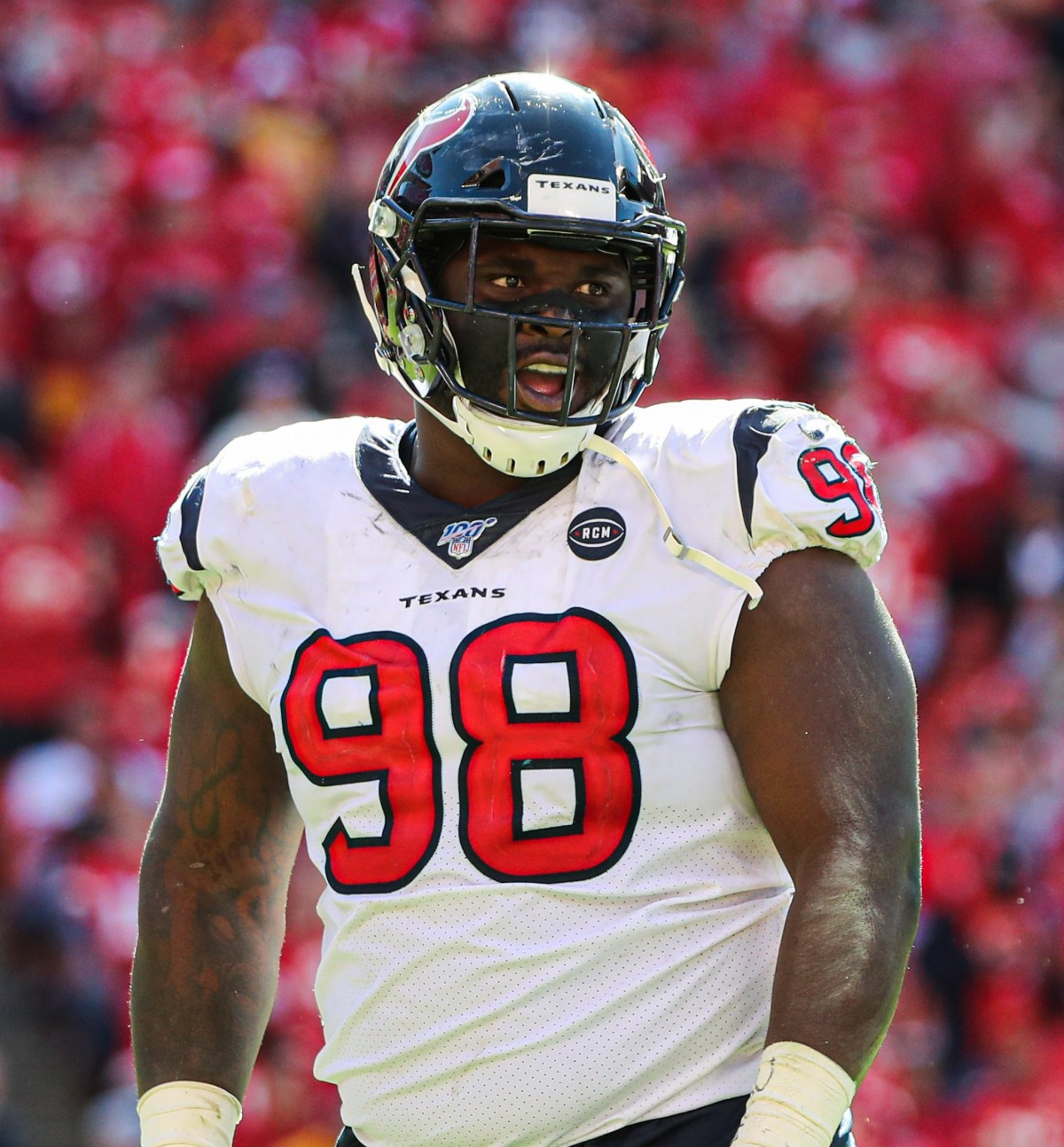 The 6-4, 230-pounder, who played safety earlier in his career at Clemson, blazed 40 yards at Lucas Oil Stadium in 4.39 seconds.

During media availability on Feb. 27, Simmons said that an NFL team would need his skill set of size and speed to stop tight ends such as George Kittle and Travis Kelce.

Isaiah Simmons is not normal.pic.twitter.com/TUdXYM5ulr

"That is not normal." — @MoveTheSticks

Simmons’ performance caught the eye of Houston Texans defensive tackle D.J. Reader, who is also a Clemson alumnus and has been keeping tabs on how his fellow Tigers have done at the combine.

The Texans didn’t really have a shot of getting Simmons as Walter Football projected him to go in the top-20 overall. Those projections were made before the combine. Now, Simmons’ draft stock could rise. Nevertheless, the Texans don’t have their first selection until pick No. 57 late in the second round.