Two par-3 holes at the Sheep Ranch share a massive green on 100-foot cliffs above the Pacific Ocean, one of the most dramatic sites in golf 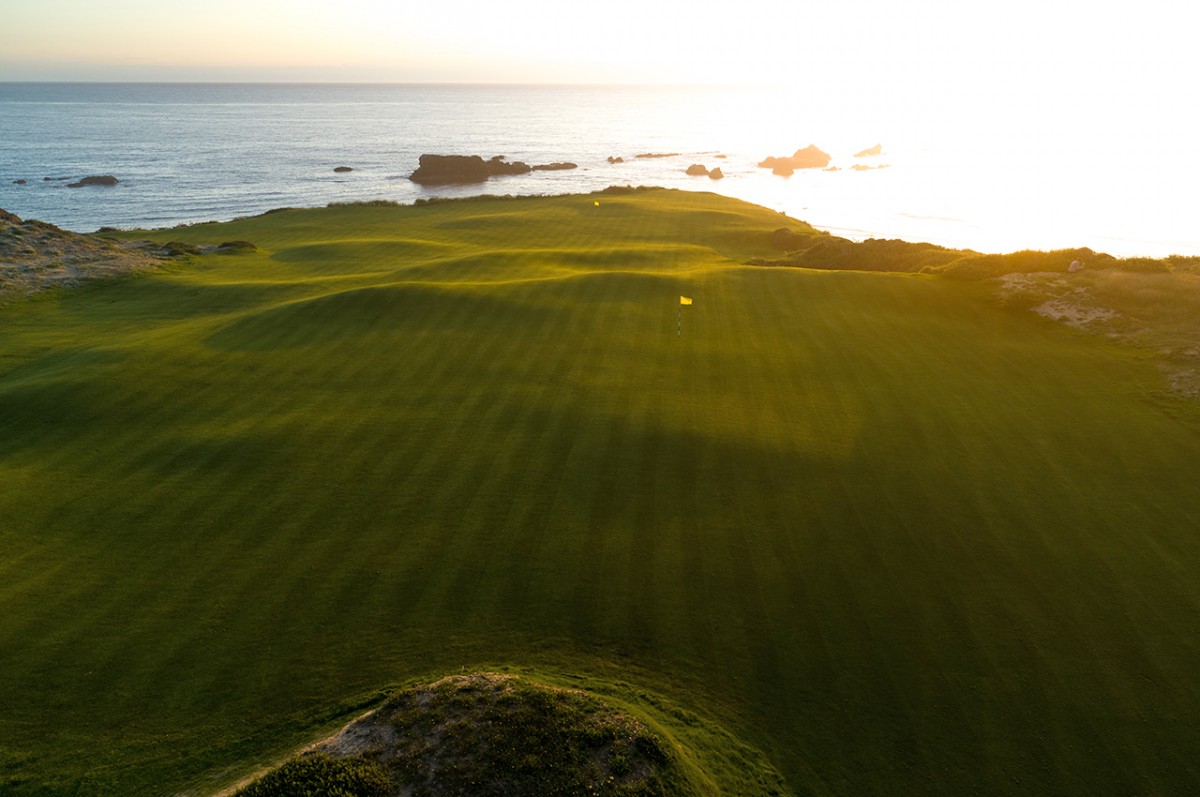 (Editor’s note: June 1 is the opening of Sheep Ranch, one of the most highly anticipated course openings of the last decade. Golfweek will have additional coverage all day long, including hourly photos on Instagram, and an Instagram Live with Golfweek Travel Editor Jason Lusk.
Follow us on Instagram here.)

BANDON, Ore. – There are plenty of cliffside holes to love at Bandon Dunes Golf Resort’s new Sheep Ranch, which opens June 1 and features nine greens on the 100-foot cliffs above the beach and Pacific Ocean below.

But the focal point clearly is the giant, undulating, made-for-selfies double green perched atop Fivemile Point.

One piece of advice: If you’re afraid of heights, don’t look down. Plenty of photos and drone videos show the steepness of that edge of North America, but it feels even more dramatic when you take a break from reading putts to sneak a peek westward.

Jutting toward giant rocks breaking free beyond the water’s edge, the double green built by Bill Coore and Ben Crenshaw is the target for Nos. 3 and 16. Both are par 3s, with No. 3 playing a mere 120 yards off the back and the 16th playing 151.

Simple, right? Short little par 3s, flip in a wedge or short iron, maybe make a putt and walk off with a smile? Not so fast. The wind that sometimes howls across Fivemile Point has to be felt to believed – it’s not an exaggeration that some players might discuss a four-club wind with their caddies. Balls that climb high into that breeze could land anywhere. Great fun.

The green is massive, with separate tall dunes blocking the right-side entrances to both holes. No. 3 plays almost directly west from the interior of the course, while No. 16 stretches along the cliff from a tee box set south of the green. The highest portion of the green serves as the front for No. 3 and is not really in play for No. 16. From that high point it’s down, around, over lumps and swales to the lowest portion of the green just a step from the cliff’s edge.

If the surface of the double green has any likeness at the entire resort that features four other highly ranked courses, it might be the Punch Bowl putting green, which isn’t even part of an 18-hole course. The Punch Bowl invites players to sip cocktails and compete against each other on a ridiculously large practice green that falls away from the first tee of the Pacific Dunes course. Likewise, players happily could spend hours tumbling balls across the double green atop Fivemile Point, if only there weren’t another tee box waiting.

Speaking of that next tee: The rear corner of the double green even serves as the par-4 17th’s back tee box, from which strong players can send a ball over the cliffs edge, across the yellow gorse and toward the ancient stumps of trees and fairway beyond.

For years the site was the focal point of the site’s previous 13-hole course, also called Sheep Ranch, that was built by Tom Doak and Jim Urbina. But that routing didn’t host much play, and Fivemile point was mostly a distant dream for players looking north from the No. 7 snack shack on the resort’s Old Macdonald course.

Now it’s the new reality, and it will be among the most-talked-about acreage at the resort. Think No. 7 at Pebble Beach or No. 16 at Cabot Cliffs for North American cliffside comparisons – the site is that dramatic, with perhaps only No. 16 at Cypress Point surpassing it for heroics.

“Five Mile Point is a focal point for the whole property, no question about that,” Coore said. “It was that way with the original Sheep Ranch, and it’s the thing people talk about the most. It was the face of the Sheep Ranch property, I guess. It wouldn’t be an overstatement to say it’s the cornerstone. You certainly won’t forget it.”