Who did the Packers get in Todd McShay’s two-round mock draft? We break down the four selections. 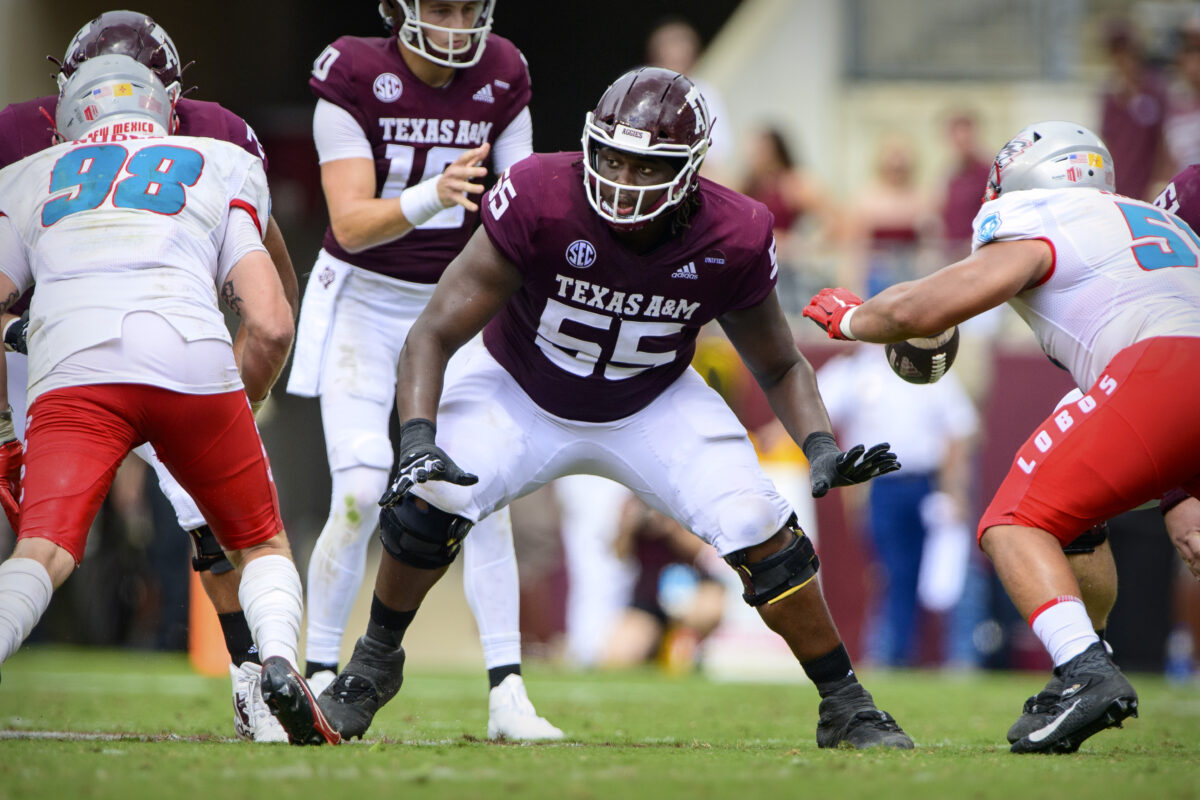 The start of the 2022 NFL draft is 23 days away. ESPN’s Todd McShay released an updated two-round mock draft on Tuesday, so let’s take a look at who McShay had the Green Bay Packers pick with their four selections in the first two rounds.

It’s been 20 years since the Packers selected a wide receiver in the first round. With the Packers having a major need at wide receiver and two first-round picks at their disposal, that streak seems likely to end on April 28.

This past season, Dotson hauled in 91 receptions for 1,182 yards and 12 touchdowns. The Penn State wide receiver may be on the lighter side (178) pounds, but he’s an eclectic playmaker. In his final 21 games, Dotson accounted for 21 touchdowns. For his career he had six touchdowns that went for 60 yards or more.

Dotson has strong, reliable hands and plays bigger than his frame. According to Pro Football Focus, Dotson was targeted 138 times this past season and only had two drops.

With his big-play ability and reliable hands, Dotson could quickly earn the trust of Aaron Rodgers leading to many big plays at 1265 Lombardi Avenue.

Green is one of the most versatile offensive lineman in the 2022 NFL Draft. This past season Green started games at left tackle, right tackle, left guard and right guard. While he’s never taken snaps at center, Green has Elgton Jenkins-like versatility.

Green is a quick and powerful run blocker. He’s got a powerful lower half and is able to drive defenders in any direction he chooses.

In pass protection, Green has a strong base. He’s rarely knocked off balance and is able to anchor down against bull rushers. The former five-star recruit has the foot quickness and lateral agility to protect the corner at tackle.

With his versatility Green could be a plug-and-play starter at right tackle or right guard for the Packers.

McBride is viewed by many as the top tight end in the 2022 NFL draft and for good reason. This past season the Colorado State product led all FBS tight ends in receptions (90) and yards (1,121). The yardage total was the most in a single season by a tight end in Mountain West history.

McBride is a big target (6-4), who isn’t afraid to work the middle of the field. He thrives on making catches in a crowd. He has the quickness (4.53) to threaten the seam.

McBride is a natural in-line tight end. With his size and strength, he’s one of the best run blockers among the top-tiered tight ends in this class.

The Packers need an infusion of talent at the tight end position. McBride could provide an immediate impact as a run blocker, as well as being a big-bodied target over the middle for Rodgers.

Jackson has all the talent in the world, but for whatever reason was never able to fully unlock it at the college level. The USC edge rusher will turn 21 on April 12, and with his upside it would not be shocking to see Brian Gutekunst select him in the first round.

He’s a toolsy edge rusher with his length, athleticism and explosiveness. This past season Jackson recorded eight tackles for loss and five sacks. Jackson has the lower body flexibility to bend and dip around the edge.

The Packers have their starters in place with Rashan Gary and Preston Smith, but they need to restock the talent behind that duo. Jackson has all the tools to be a difference-maker. Getting him this late in the second round could prove to be the heist of the 2022 NFL draft a few years down the road.

The Packers are out of the playoffs, and the draft is now about three months away. It’s time to dig into Packers Wire’s second mock draft of the 2022 cycle. 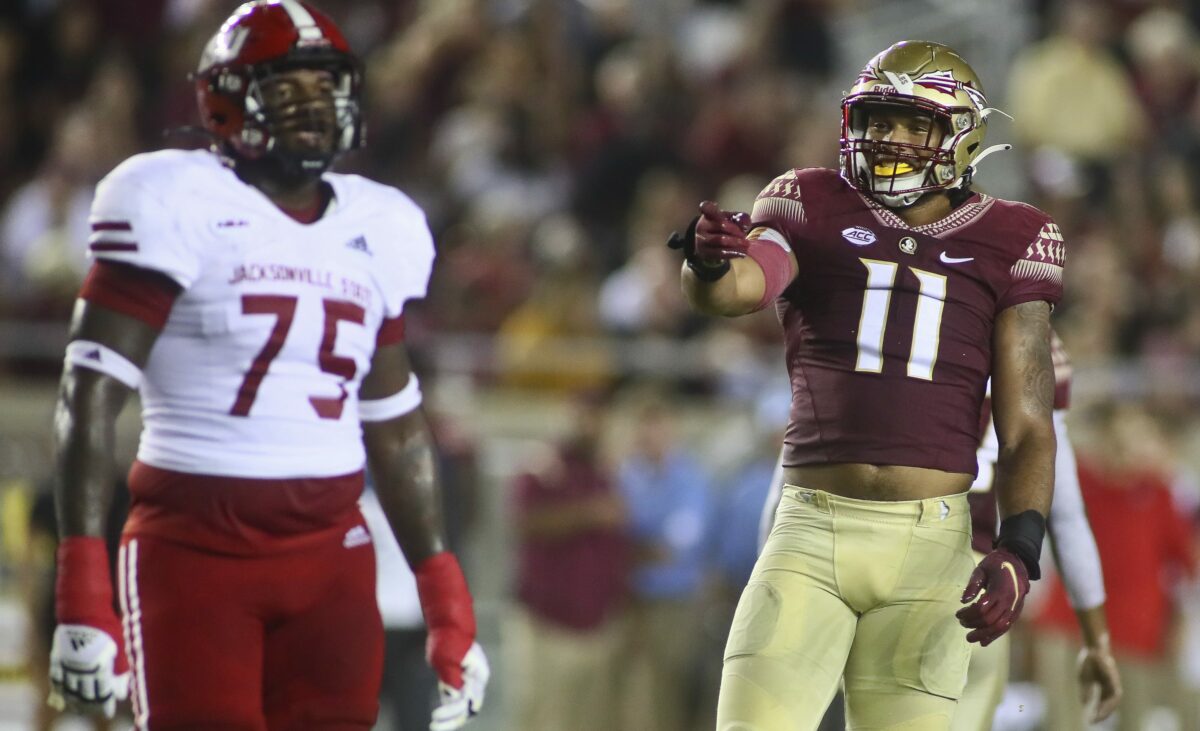 With Saturday night’s loss to the San Francisco 49ers, the Green Bay Packers are officially locked into the 28th overall pick in the 2022 NFL draft.

The last time the Packers had the 28th overall pick was back in 2012 when they selected USC edge rusher Nick Perry.

It’s 10 years later and edge rusher could be high on the priority list for general manager Brian Gutekunst.

With the NFL draft 94 days away, let’s take a look at my latest mock draft results for the Packers.

The Georgia transfer finished his collegiate career with 24.5 tackles for loss and 18 sacks.

Johnson checks all the boxes. He gets upfield quickly with an explosive first step and does a great job of converting speed to power.

As a run defender, he’s strong at the point of attack and does a good job of setting the edge. He has a high football IQ and sees the play coming. He has strong hands and has great burst to make plays behind the line of scrimmage.

With Za’Darius Smith and Preston Smith likely being cap casualties, the Packers will look to address the edge position early in the upcoming draft. Johnson could step in from day one and play across from Rashan Gary.

The Georgia linebacker finished this past season with 67 tackles, 7.5 tackles for loss, and five sacks.

Tindall might be the best run and hit linebacker in this class. He sees the ball and has elite quickness to roam sideline-to-sideline.

If De’Vondre Campbell isn’t re-signed this offseason, the Packers could look to Tindall as his replacement on day two of the draft.

Even if Campbell is re-signed, Tindall could be an excellent No. 2 backer and would help on special team units from day one.

Reacting to the two players mocked to the Packers in Dane Brugler’s most recent two-round mock draft at The Athletic. 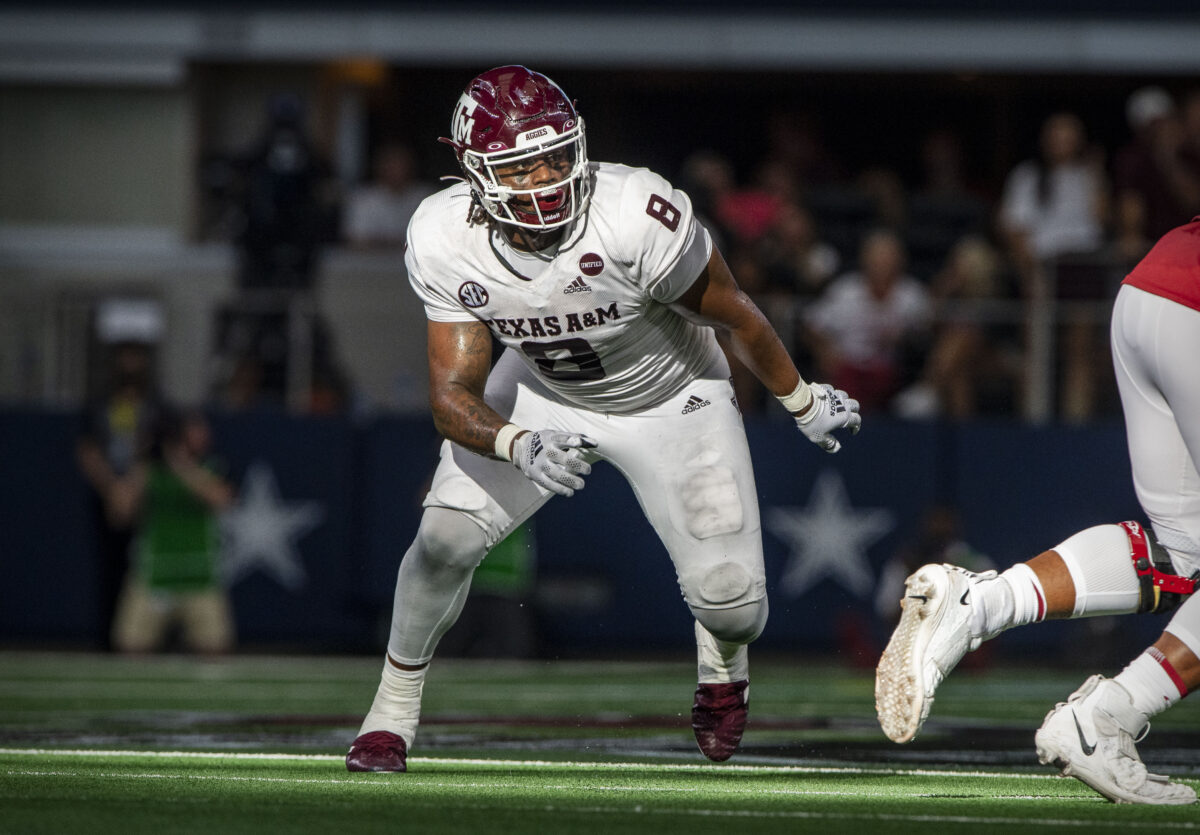 The Athletic’s Dane Brugler has released his second mock draft of this year’s draft cycle.

In his first mock draft, which was released in November, Brugler had the Green Bay Packers selecting Kentucky offensive lineman Darian Kinnard with the 30th pick overall.

Here are the results from his latest mock draft:

This would be a dream scenario for the Packers. Leal is a disruptive force that would immediately boost Green Bay’s interior pass rush, while also helping shore up the run defense.

Leal looks the part at 6-4, 290 pounds. He has a quick first step and has made a living making plays behind the line of scrimmage. The Texas A&M defensive lineman finished the season with 58 tackles, 12.5 tackles for loss, and 8.5 sacks.

It’s not a stretch to say that Leal would be the most talented defensive lineman that Kenny Clark has played with during his career in Green Bay. Leal has the length and athleticism to be a disruptive force in the NFL.

The Packers love toolsy front-seven defenders, and Leal is exactly that. He isn’t yet the sum of his parts, which is why he could still be available at this point in the first round. But at 6-4 and 290 pounds, Leal can line up anywhere on the defensive line and has the traits to develop into a productive starter.

The Packers will likely address the tight end position at some point in the 2022 NFL Draft. In Brugler’s mock, he has the Packers spending a premium pick on the position.

Ruckert’s numbers aren’t eye-popping, but he has reliable hands and is a smooth accelerator in his routes. He has the ideal frame at 6-5 and he does a great job of making contested catches.

While he may not have gaudy numbers, Ruckert did the dirty work for Ohio State. He’s a solid run blocker and could help boost any team’s run game when he’s on the field.

Rucker finished this past season with 26 receptions for 309 yards and three touchdowns. Over the past three seasons, Ruckert hauled in 12 touchdown passes.

It’s worth noting that Brugler mocked Eric Stokes to Green Bay around this time last year. What Brugler says holds some weight.

If the Packers came away with Leal in the first round it would be a slam dunk pick. He has all the tools to be a force up front. Leal and Clark would cause a lot of mayhem for the Packers.

Ruckert could step in from day one and provide an impact both as a blocker and as a receiver. If the Ohio State tight end landed in Green Bay he could put up similar numbers (60 receptions, 497 yards, seven touchdowns) to what Pat Freiermuth posted in Pittsburgh this past season.

Too early for a 2022 mock draft? Never! Here’s a two-round prediction for the Green Bay Packers. 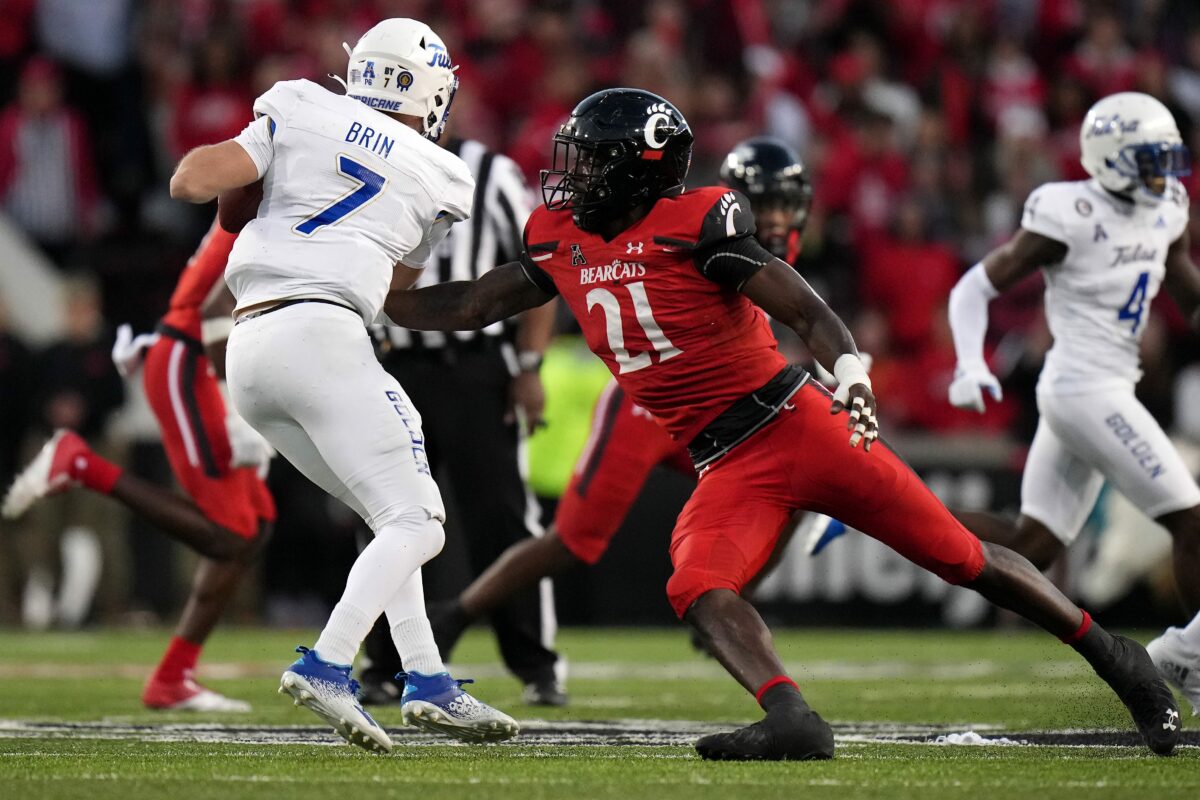 The Green Bay Packers are 7-2 and one of the NFL’s legitimate Super Bowl contenders, but it’s always draft season and the 2022 NFL draft is (only) 169 days away. This means it’s a good time for a mock draft. Here are the two-round results for the Packers:

In the 2019 NFL draft, the Packers selected edge rusher Rashan Gary with the 12th overall pick. Leading up to that college football season, Bruce Feldman listed Rashan Gary as the No. 1 Freak in his annual Freak’s list.

The strapped-for-cash Packers will most likely have to move on from Za’Darius and Preston Smith this offseason, meaning the Packers will be searching for a new running mate for Gary.

A player that they could target is a fellow freak, Myjai Sanders. The Cincinnati edge rusher checked in at No. 20 in Feldman’s list this season.

The former three-star recruit has started 33 games for the Bearcats. During that time Sanders has racked up 22 tackles for loss and 12 sacks. Thus far this season he’s recorded just one sack, but his impact on the game goes beyond the stat sheet.

“Sanders leads the Bearcats with six quarterback hits and directly forced interceptions against Indiana and Notre Dame with pressure he created in the backfield. The advanced stats back up the eye test as well: According to Pro Football Focus, Sanders has 15 total pressures (sacks/hits/hurries) through four games.”

Sanders has the ideal NFL length and frame. He has long strides and quickly closes in on the quarterback.

A team can never have enough pass rushers and if the Packers were to land Sanders it would give Joe Barry a pair of athletic and strong edge rushers to get after the quarterback.

A year ago Packers’ Twitter was all aboard the Rondale Moore train. The athletic and diminutive Purdue wide receiver was a highlight reel waiting to happen.

Fast forward a year and the Boilermakers have another wide receiver that could make for a sexy Day 2 pick for the Packers.

David Bell earned Big 10 Freshman of the Year in 2019 after catching 86 passes for 1,035 yards and seven touchdowns. Bell added one rushing touchdown to his stat line.

In six games in 2020, Bell reeled in 53 receptions for 625 yards and eight touchdowns. Thus far this season, Bell has caught 53 passes for 786 yards and four touchdowns.

The former four-star recruit is a contested-catch connoisseur. Bell does a great job of high-pointing the football and outmuscling cornerbacks. He has an Inspector Gadget-like catch radius. According to Pro Football Focus, Bell had 63 contested catches during his career heading into the 2021 season.

The only wide receiver under contract for the Packers following this season is Amari Rodgers. Will the Packers be able to lock up Davante Adams? Will they bring back Marquez Valdes-Scantling or Allen Lazard? Randall Cobb has shown that he still has a little left in the tank, but will the Packers bring the fan-favorite back?

There is so much uncertainty surrounding the wide receiver position right now, that the only thing that we know is the Packers are most likely going to spend a day-two pick on a wide receiver in the 2022 NFL draft.