A compilation of some of the top highlights and photos of the Chargers players who participated in the 2022 Pro Bowl. 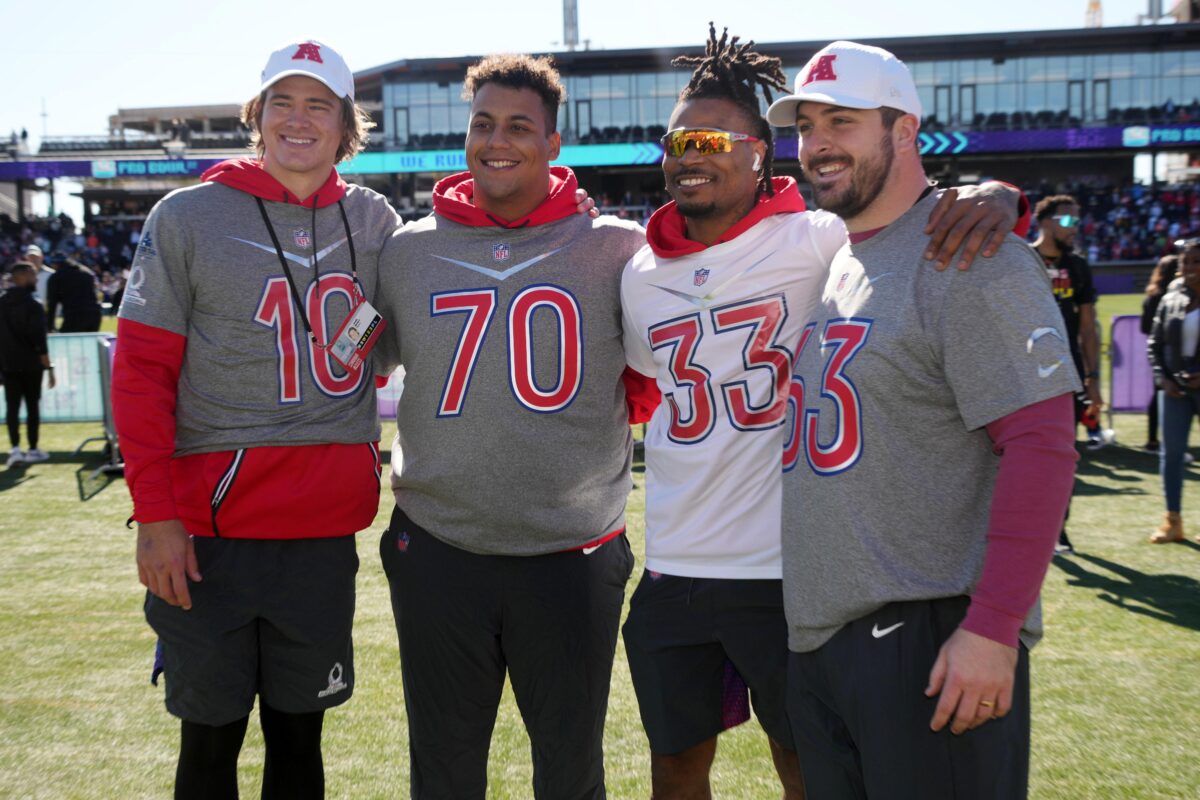 Wide receiver Keenan Allen and edge defender Joey Bosa were initially selected, but they decided to opt out.

Throughout the week, Herbert, James, Slater, and Linsley were all documented at the practices and Sunday’s all-star game.

With that, here are some of the top highlights and photos from the guys who represented the Bolts in this year’s Pro Bowl.

“I honestly didn’t expect to make it…it’s really cool to be here. I’m so thankful.”@Kay_Breezy22 catches up with @chargers’ Rashawn Slater (@rdsl8r) about being at the #ProBowl and answers a few rapid fire questions. pic.twitter.com/niezgaIycs

HERB PIC W A BABY ur fav could never pic.twitter.com/boJcpfSkRz

*looks into camera like justin herbert from the chargers* pic.twitter.com/hpobNN4h0Z

Just another day in the office for Chargers QB Justin Herbert. 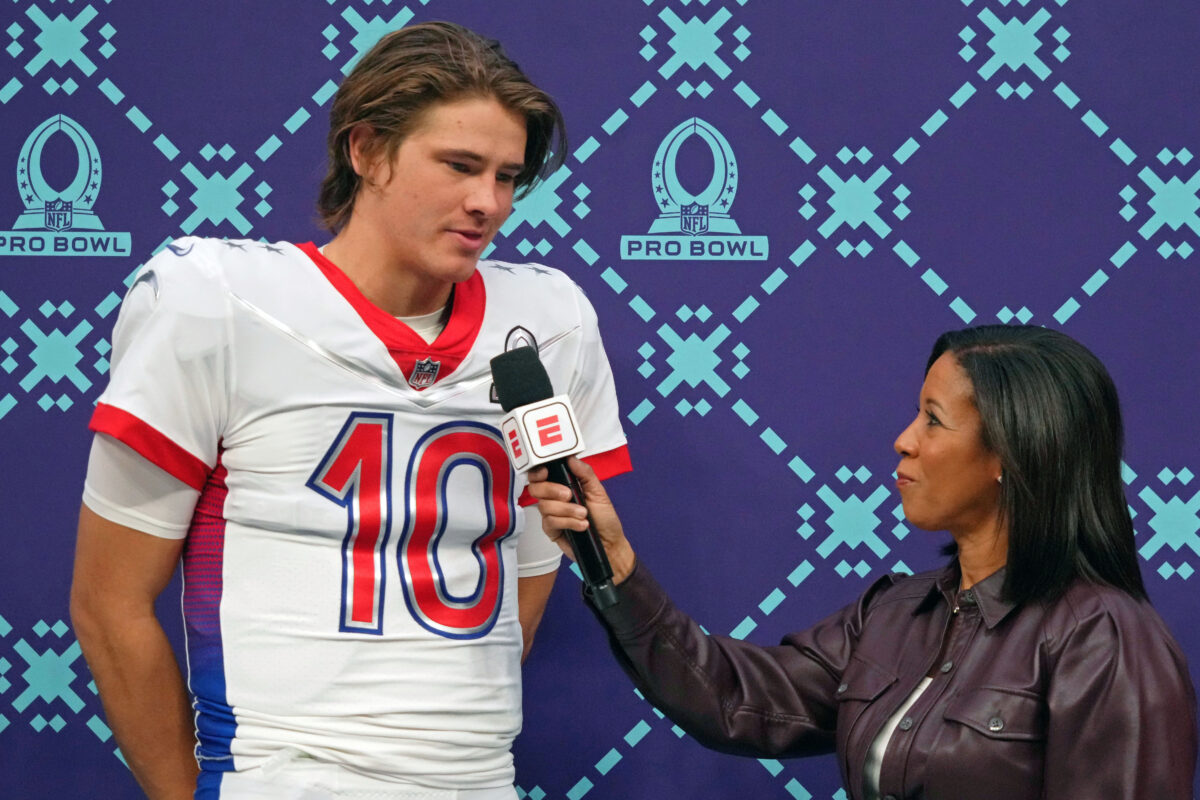 The AFC defeated the NFC 41-35 on Sunday at the 2022 NFL Pro Bowl at Allegiant Stadium in Las Vegas, NV.

Chargers quarterback Justin Herbert was named the game’s offensive MVP after finishing 7-of-11 for 98 yards, two touchdowns, and an interception.

Herbert connected with Ravens tight end Mark Andrews on both of his passing touchdowns.

Not too shabby for winning the prestigious award after being named to the Pro Bowl for the first time in just his sophomore season.

The other Chargers players who participated in the all-star game were safety Derwin James, tackle Rashawn Slater, and center Corey Linsley.

James had an interception, and Slater played some right tackle.

Here are some highlights from the action below:

This back of the endzone dime was 💰

Many Chargers and NFL fans took to Twitter and shared their thoughts on the selections and omissions from this year’s team. 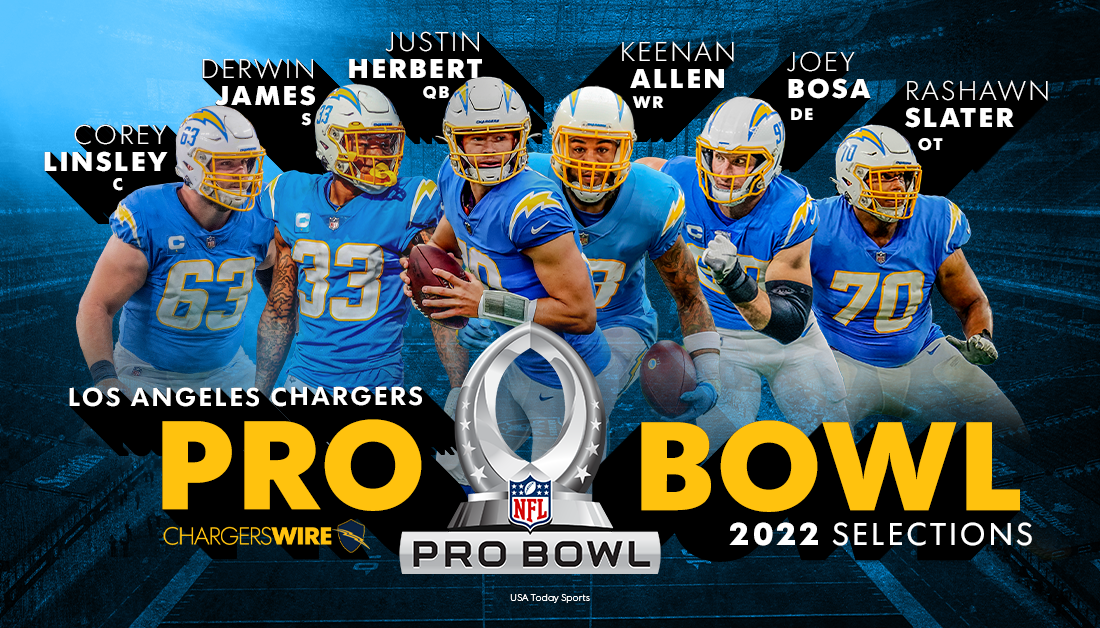 Six members of the Chargers were rewarded for their hard work, as Justin Herbert, Derwin James, Rashawn Slater, Joey Bosa, Corey Linsley, and Keenan Allen were selected for the 2022 Pro Bowl.

Here is how the general population reacted after the rosters were unveiled:

Boy the Chargers leading the NFL in starters voted to the Pro Bowl by fans is a real problem for the no-fans narrative.

There's either more of us than you think or we're more diehard than you. Your choice 🤷‍♂️ https://t.co/1zELzrzdJ8

The Chargers had the worst offensive line in the league last year. They just had two be named as Pro Bowl starters for this season. You love to see it 👏🏼

Chargers who didn’t make the Pro Bowl (alternates excluded here) that deserve the recognition of a great season:

But we don’t have fans

This brings a smile to my face.

Keenan said it best!! Muthafreakin' MVP!! Congratulations to our baby, Justin Herbert, on his first Probowl and as the top QB vote getter in the AFC! Amazing what this kid has accomplished at only 23 yrs old! 👏🏻👏🏻 🙌🏼 👌🏻 ⚡💙⚡💙⚡⚡ pic.twitter.com/2P7KTsQ9Lj

Not saying it just because he my brother but Idk how kyzir White dont make the Pro bowl lol Watch the film and check the stats! #ProBowlVote

Kyzir White & Austin Ekeler should be in the pro bowl. Film and numbers absolutely don’t lie.

Chargers who didn’t make the Pro Bowl (alternates excluded here) that deserve the recognition of a great season:

The Chargers had a handful of players named to the Pro Bowl, but there were a couple who were snubbed. 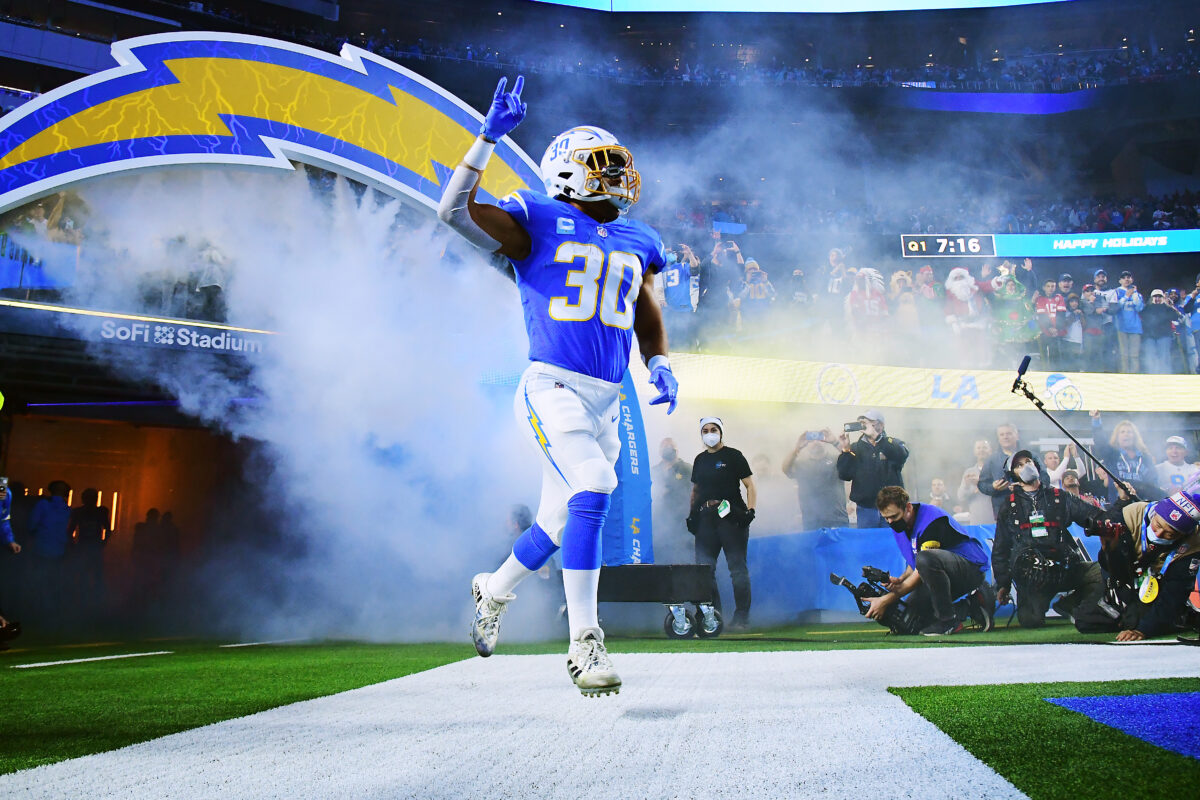 On Wednesday night, the rosters for the 2022 Pro Bowl were revealed.

Six members of the Chargers earned the honor, and five others were named alternates, including a player who was more than deserving of making the team itself.

Austin Ekeler highlights the notable snubs across the league.

While Justin Herbert is the engineer, the offense would not be as productive if it weren’t for Ekeler’s services.

Ekeler, the do-it-all back, is sixth in the NFL in total yards this season (1,347), fourth in rushing touchdowns (10), and second to Jonathan Taylor in total touchdowns (17).

Derwin James and Joey Bosa were the only representatives on the other side of the ball. However, the man in the middle of the defense has played his way into being recognized among the best at his position.

Impactful against in coverage, and as a blitzer, Kyzir White has 115 tackles, 7.5 for loss, three interceptions, two forced fumbles, three quarterback hits, and a sack through 14 games.

But White not being named to the Pro Bowl is not a concern, as he has his eyes set on playing in a game with much more meaning.

The Chargers are well-represented. 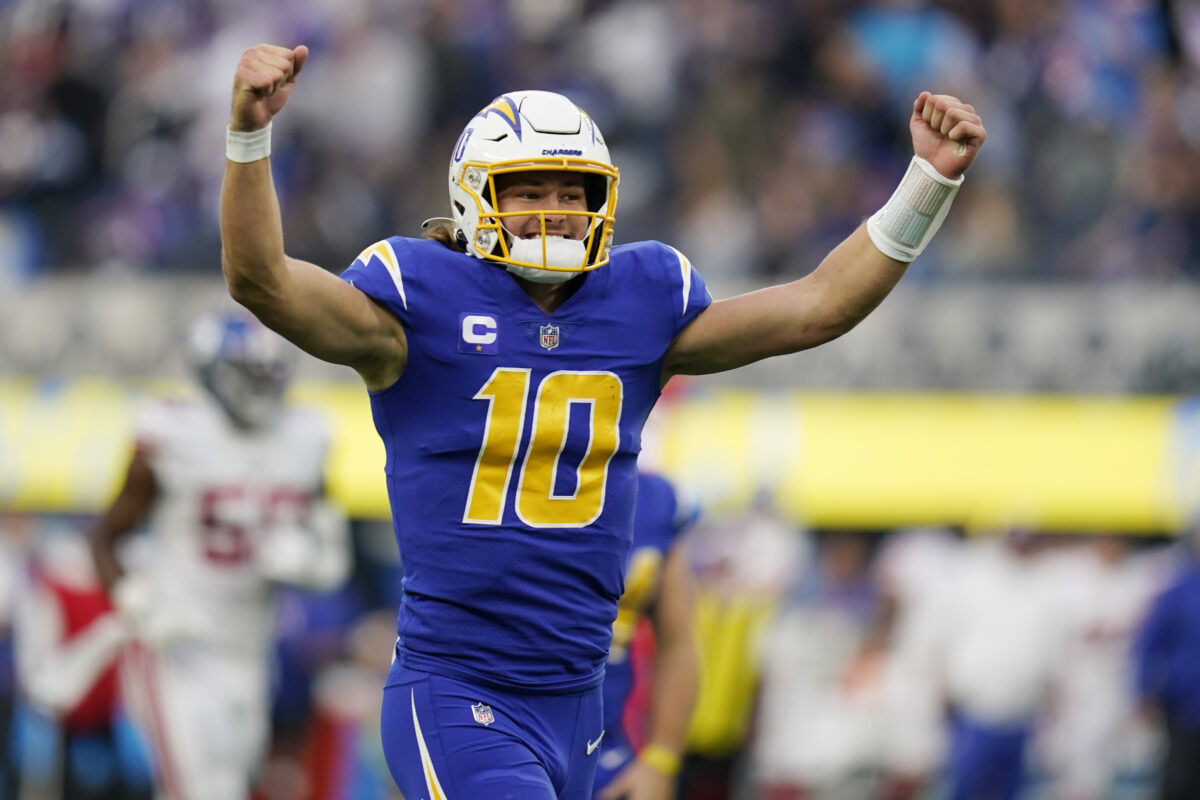 The votes are in and there were six players from the Chargers named to the 2022 Pro Bowl.

Herbert was named the AFC starter.

A total of 80 players were named to the AFC and NFC Pro Bowl teams, with rosters determined by the consensus of votes of fans, players, and coaches.

The game will be played at Allegiant Stadium in Las Vegas on Feb. 6.

The Chargers are represented by two offensive players. 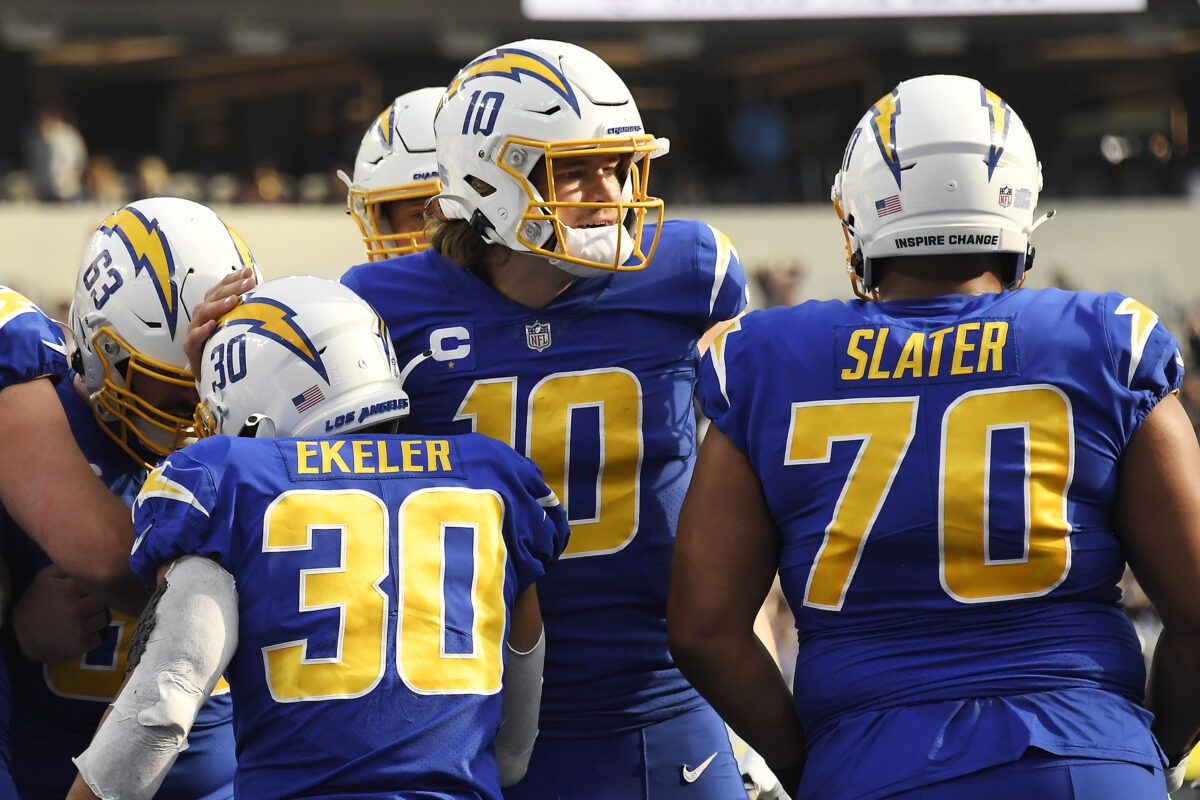 Two Chargers players finished as the top vote-getters at their positions as Pro Bowl fan voting concluded this past week.

Quarterback Justin Herbert (213,904) and left tackle Rashawn Slater (83,085) all got the most votes among AFC players at their positions.

Herbert has solidified himself as a legitimate MVP candidate in his sophomore season.

Only 13 games played, and Slater has established himself capable of stymying even the best pass rushers in the league – allowing just four sacks and 22 pressures.

Fan voting counts as one-third of the selection process, with voting by players and coaches counting for the other two-thirds.