It’s about the coaches now, as Dan Quinn begins a busy week of interviews. Is Mike McCarthy safe? And is Kellen Moore even HC-ready? | From @ToddBrock24f7 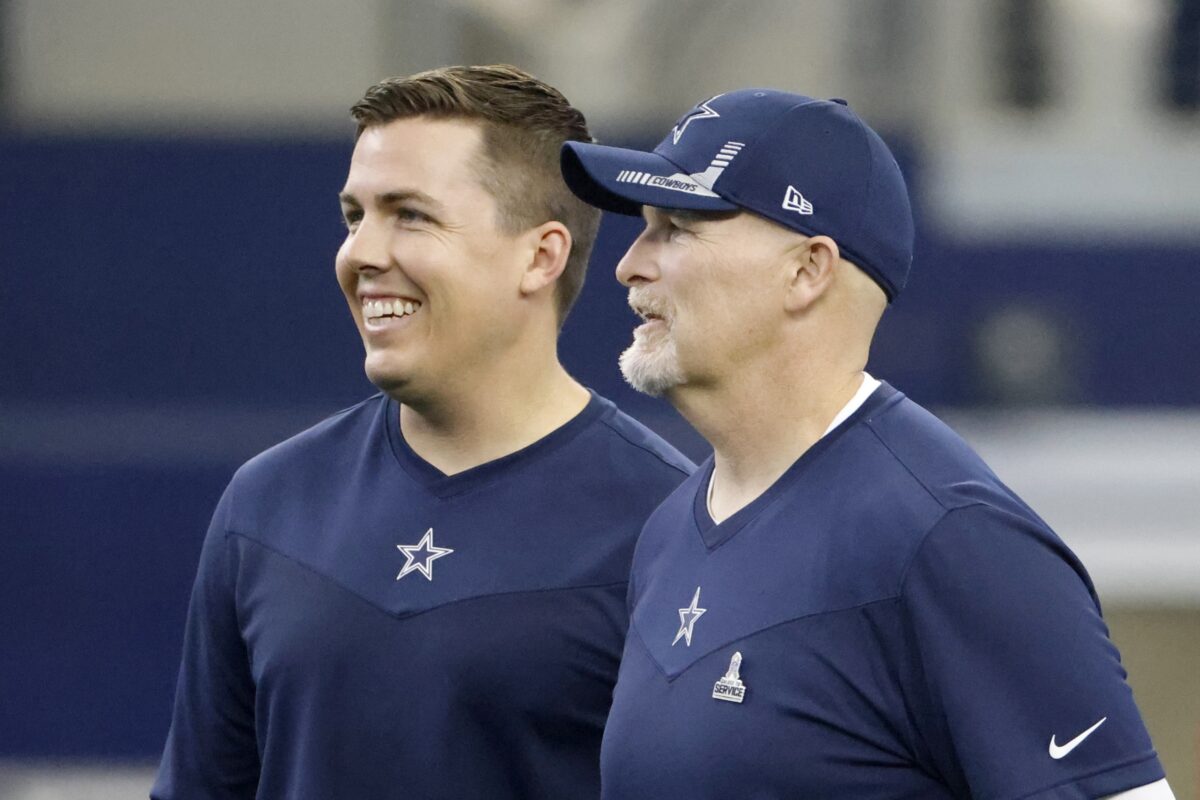 And just like that, it’s over. The 2021 campaign is complete for the Cowboys, and the immediate focus turns to the coaching staff. Who’s staying? Who’s going? Who’s talking to whom? Mike McCarthy wasn’t a topic Jerry Jones wanted to discuss Sunday night, but Stephen was casting a big vote on confidence on Dallas radio by Monday. Defensive coordinator Dan Quinn embarks on a busy week of job interviews with no fewer than four other clubs, but the anemic wild card showing suddenly calls into question whether his offensive counterpart Kellen Moore is really ready for a promotion.

Elsewhere, plenty to unpack from what transpired on the field, from the many details that doomed Dallas to Ezekiel Elliott’s mystery ailment that’s finally been named, from the role the officials played to that bizarre final play. We’re searching high and low for somebody wearing a star who was a bright spot, and we’re facing facts about just how bad it really was. Dak Prescott had a cringeworthy line in his postgame press conference… but also did a stand-up thing for some of his lesser-known teammates. And we’re looking at the Cowboys’ now-solidified spot in the draft order… because that’s the next thing to look forward to now. News and Notes rolls on…

A new report says a Dallas loss could cost McCarthy his job, to allow Jerry Jones to put one of his heavily-courted coordinators in charge. | From @ToddBrock24f7 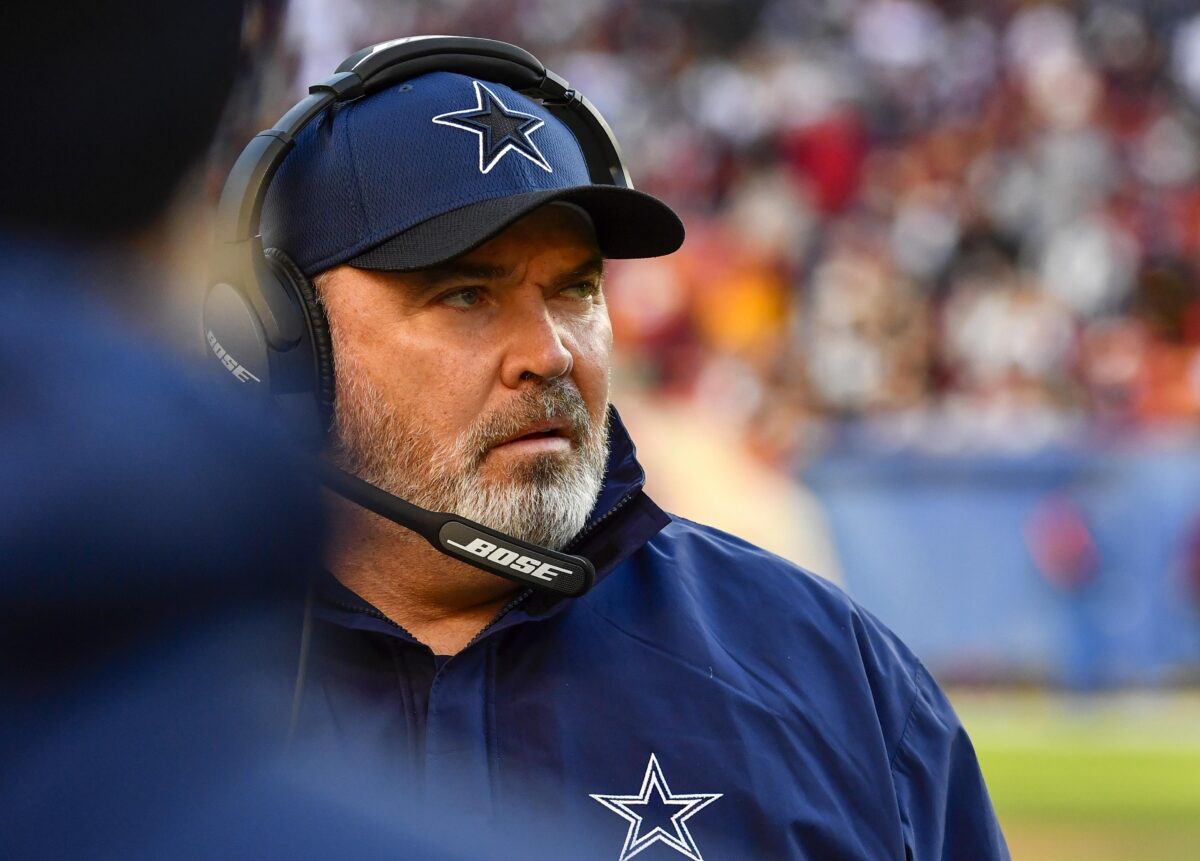 The stakes for Sunday’s wild-card game in Dallas may have just gotten even bigger. One NFL insider reports that a Cowboys loss to the 49ers could cost head coach Mike McCarthy his job, a move that would allow owner Jerry Jones to offer one of his heavily-courted coordinators the role in order to keep him in the building. The news comes as yet another team requests interviews with both Dan Quinn and Kellen Moore.

Elsewhere, oh yeah, there’s a playoff game to be played, too. The Cowboys’ phenom linebacker got some top-tier mentoring this week as he sets out on his own bid for postseason immortality. There’s plenty of debate over which Dallas defender will be tasked with shutting down 49ers tight end George Kittle; both Jayron Kearse and Donovan Wilson may get their shot Sunday. The big boss isn’t worried about a pro-San Francisco crowd, but the city’s airport may have just jinxed the home team by throwing around some smack talk on social media. All that, plus player rankings heading into the tournament, Ralph Neely’s widow speaks out on the toll that Cowboys football took on her late husband, and tragic news about a troubled ex-player. Here’s the News and Notes.

Special Teams the key on Sunday? A review of the health index of each club and a look at the analytics behind the wild-card combatants. @CDBurnett7 brings the news roundup. 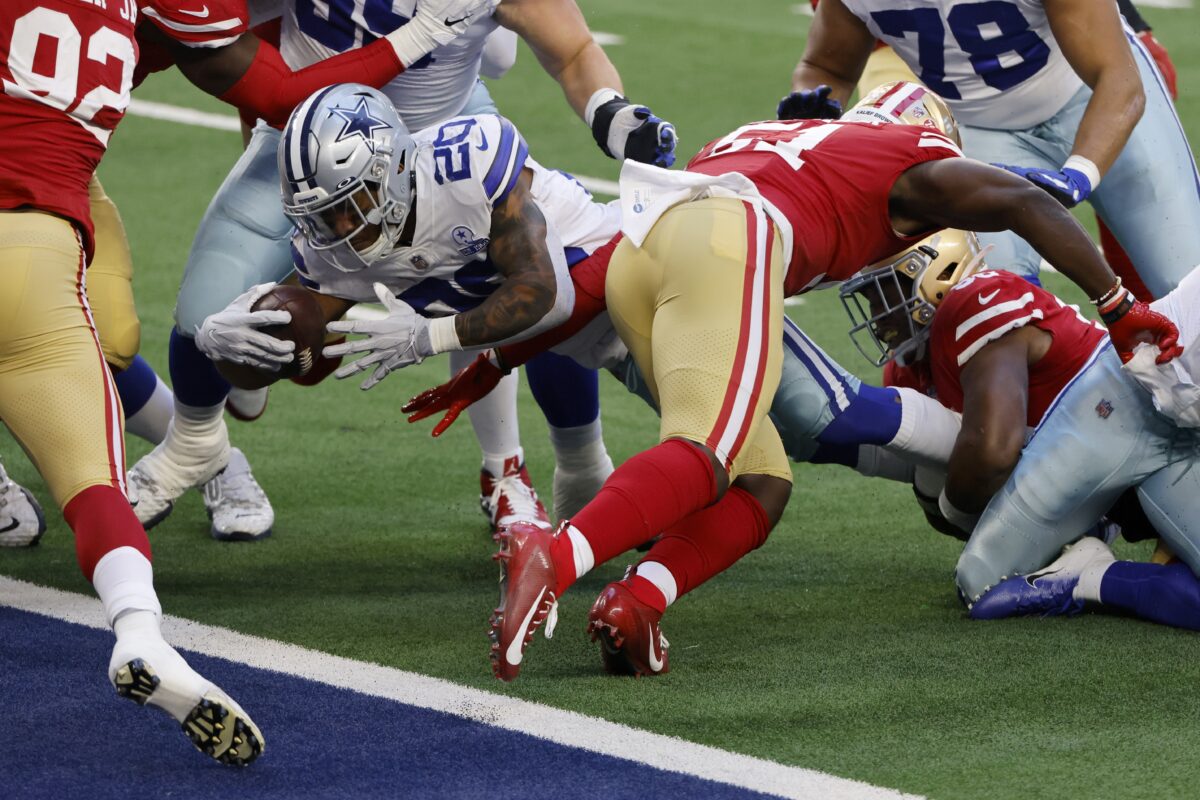 The NFL playoffs have arrived and the hype surrounding the rekindled rivalry between the Dallas Cowboys and San Francisco 49ers might be the biggest story for wild card weekend. Dallas is the favorite in this game but there’s much more to note about a scrappy 49ers team.

Predictions have the Cowboys winning it but the advanced statsspeak to how it’s a tough matchup for Dallas to open up the postseason. Luckily for the Cowboys, they’ve got some big pieces back.

Safety Jayron Kearse is off the COVID list, running back Tony Pollard is good to go, while Dallas returns a couple newly-announced All-Pro defenders after a game off in Week 18. It’s time to buckle up for the most important moment of the Cowboys’ season so far.

The Cowboys have locked up their roster-building guru just ahead of the rebirth of a storied playoff rivalry. | From @StarConscience 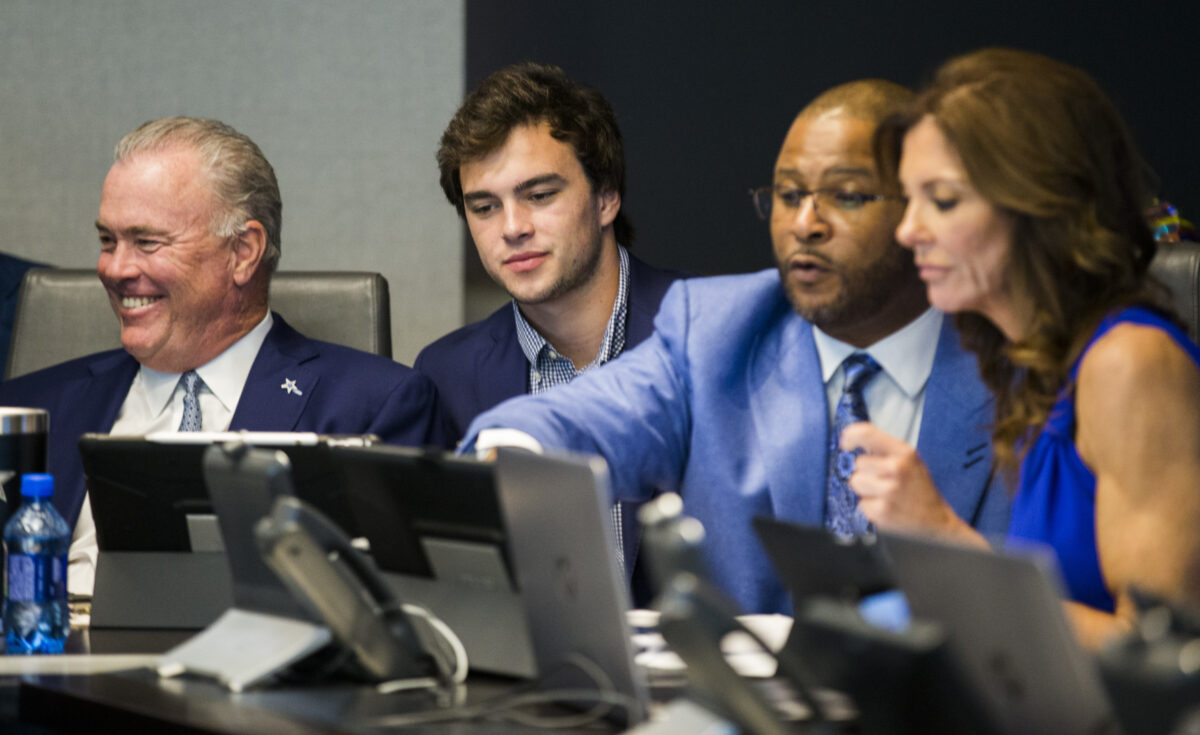 Teams were certainly salivating about the possibility of snagging the Dallas Cowboys Vice President of Player Personnel, Will McClay. However, the man who has built the Cowboys’ roster into one of the NFL’s best will be making personnel decisions for the foreseeable future in Dallas after reaching an agreement on a new deal. Wide receiver Amari Cooper has been seen at multiple sporting events recently without a mask, and since he’s unvaccinated, it will cost him.

Quarterback Dak Prescott torched the Philadelphia Eagles in Week 18 and put his name in the Cowboys history books multiple times. However, his objective is to play at the highest level  when it matters most, the postseason. The Cowboys getting close to full strength, a look back at the storied playoff rivalry between Dallas and San Francisco, a game prediction, and more highlight the news and notes for Thursday.

The Cowboys getting the reinforcements ready, key matchups and “America’s Team” dominating the ratings yet again. The countdown to Sunday is on. | From @CDBurnett7 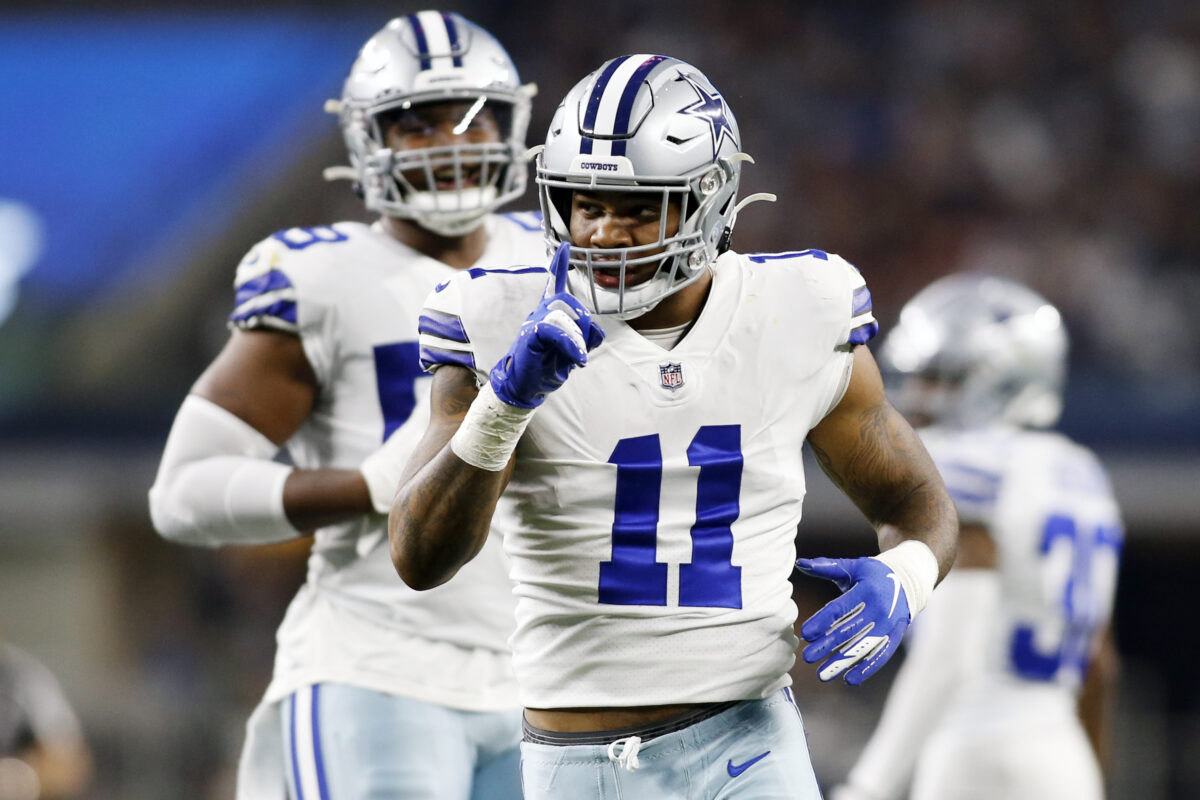 Four days before the Cowboys’ wild-card matchup with the 49ers, Dallas is welcoming back some of their biggest pieces in left tackle Tyron Smith and linebacker Micah Parsons, who added to “The Lion” lore in his press conference. Quarterback Dak Prescott earned NFC Offensive Player of the Week honors for his five-touchdown performance and he’ll look to carry the momentum into the playoffs with his team near full strength.

On the defensive side of the ball, San Francisco WR Deebo Samuel poses a big challenge but Dan Quinn has a gameplan ready that could include extra playing time for physical rookie cornerback Kelvin Joseph to make sure the San Francisco receiver doesn’t get loose with the football in his hands. The Cowboys dominated the TV ratings again in 2021 and it should be the sam for Sunday’s matchup that features imperative physical matchups for Dallas to extend their season into the divisional round.

The owner admitted that kicking woes have affected play calling, while the play-calling guy is lining up new potential suitors on the daily. | From @ToddBrock24f7 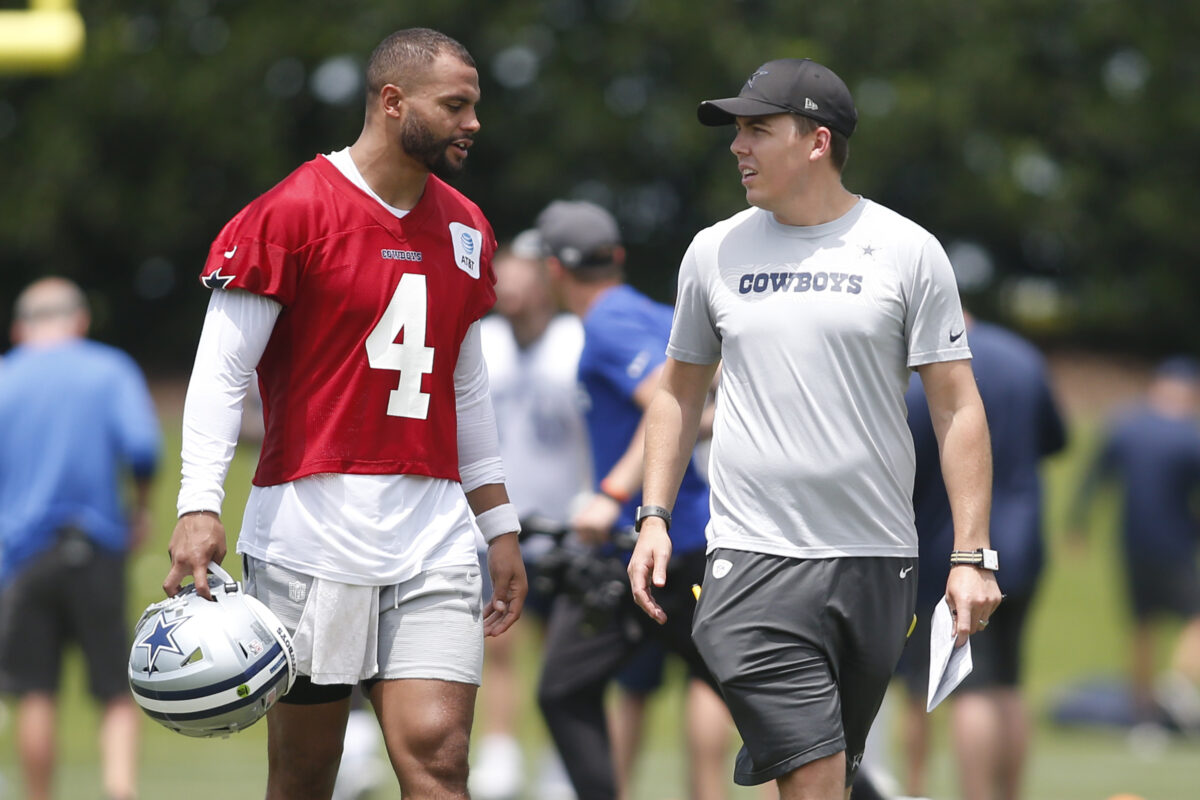 The Dallas coordinators remain front and center this week as the team preps to head into the postseason. Dan Quinn will be matching wits with the OC who was under him when he was a head coach in Atlanta, all while a third and fourth team have now come forward with requests to talk to Quinn about being a head coach once again. Kellen Moore, meanwhile, has another interview to line up as well… as Cowboys fans are wondering out loud if the boy genius may have been purposely keeping the offense in first gear for the past several months, saving the fireworks for the tournament.

Elsewhere, we’re reviewing TV ratings from Week 18 and looking ahead at broadcast duties for Wild Card Weekend. Everson Walls is talking about what “The Catch” did to his legacy, Jerry Jones has something to say about the Cowboys’ struggling kicker, and big-hitting safety Roy Williams receives a big-time honor. All that, plus handing out season-finale grades, scouting a top edge rushing prospect, and making plans to turn AT&T Stadium white to drown out 49ers fans. That’s all up in News and Notes.

Coach Mike McCarthy expects all the team’s COVID players back this week; plus Sunday’s ticket prices skyrocket, and more flags coming? | From @ToddBrock24f7 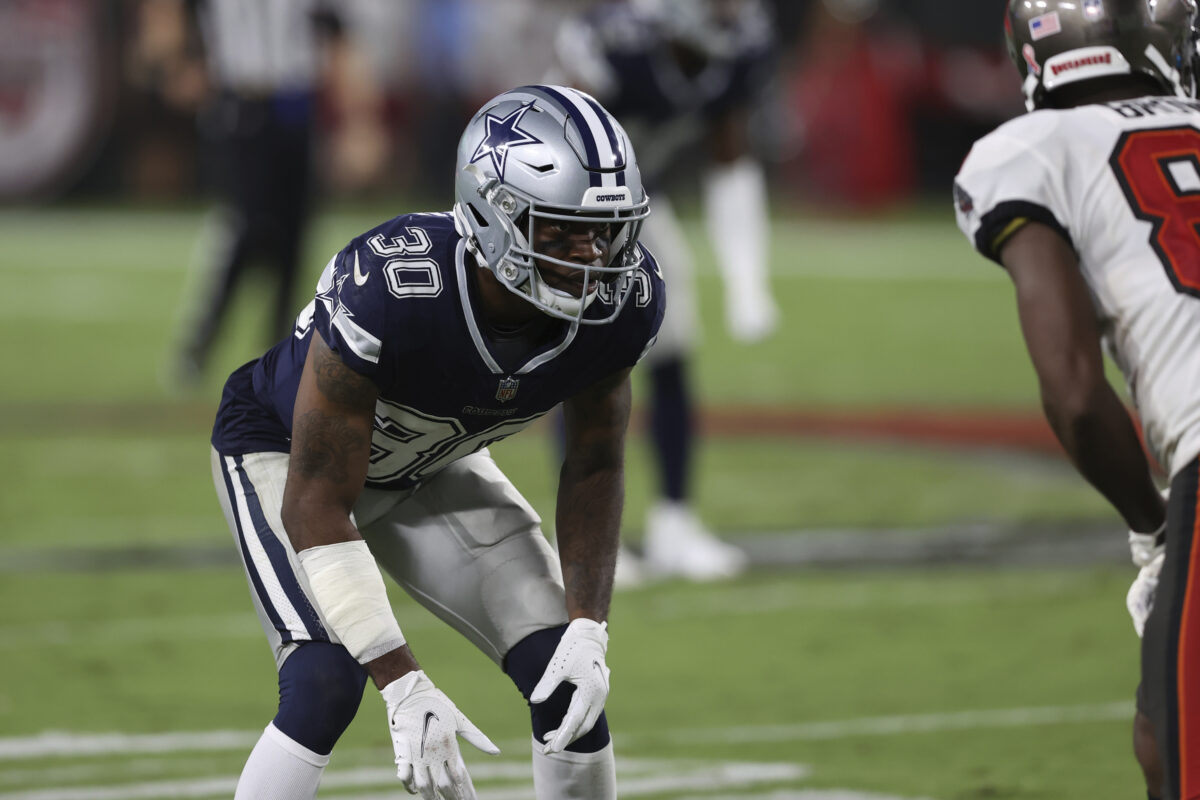 The Cowboys hope to welcome all of their COVID players back this week, starting with cornerback Anthony Brown. They’ll need all the personnel they can get for their wild-card matchup with San Francisco, as the early line has Dallas just a 3-point favorite. But would the Cowboys hit a three-pointer if it came to that? Special teams coordinator John Fassel admitted that kicker Greg Zuerlein is having a “psychological” issue that’s causing his frequent misses this season.

All that, plus ticket prices skyrocketed after the 49ers were announced as the postseason opponent; San Francisco coach Kyle Shanahan talked about the rivalry between the two clubs. COVID concerns aren’t over; Mike McCarthy talked about players being smart and possibly even entering a hotel bubble… all while two star players flew to Indianapolis to hang out on the crowded sidelines of the CFP National Championship Game. The Cowboys rank No. 1 in one impressive category, we’re handing out end-of-year awards, the Dallas coordinators are drawing more interest, and there could be more yellow flags on the horizon in Sunday’s game. Here’s all the News and Notes.

The Week 18 finals is shaping up to be a glorified preseason game, with many backups and rookies set to get significant playing time. | From @ToddBrock24f7 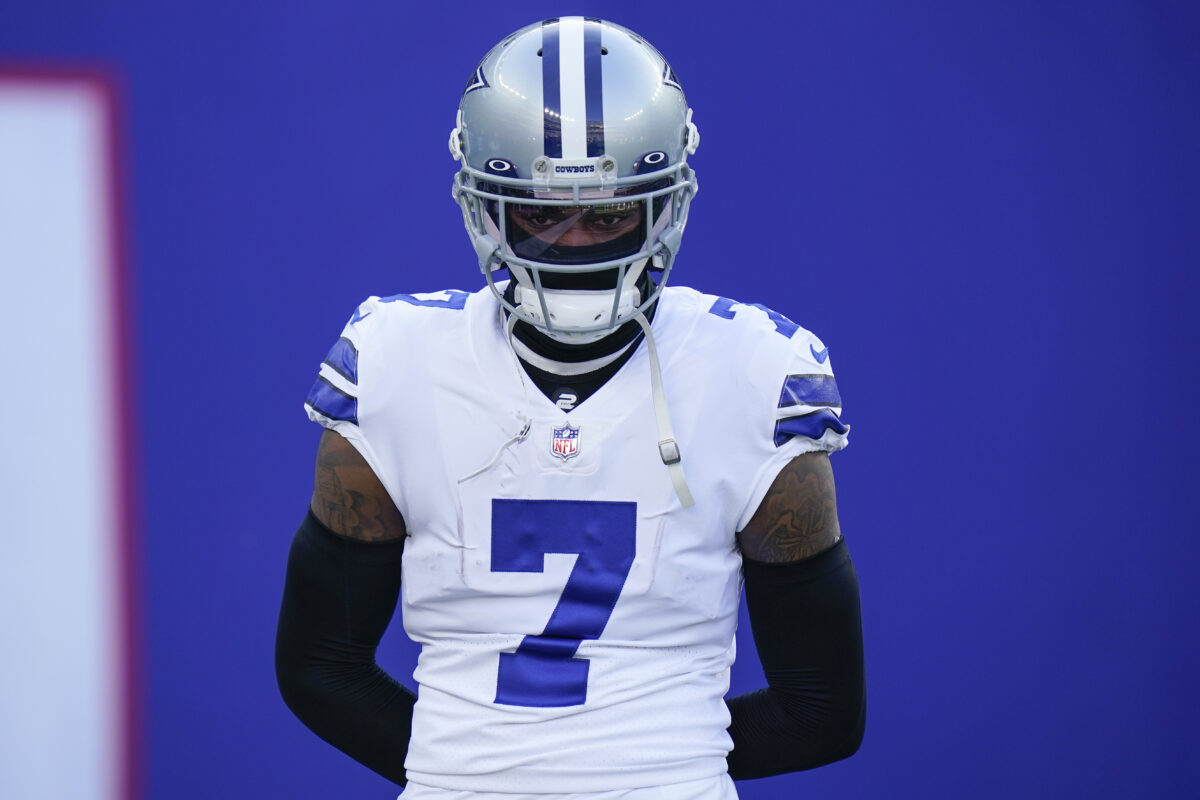 The regular-season finale often amounts to a de facto playoff game, with a postseason berth riding on the outcome of a divisional grudge match. The Cowboys’ 2021 closer Saturday night could, however, resemble a glorified preseason contest. The team announced several starters would stay behind in Dallas with either illness or injury, and that’s not even counting the COVID absences. Fans can instead expect to get the kind of extended look at little-used depth players that’s normally limited to August, with three rookies set to log serious snaps in the secondary.

Also, we’re looking ahead to potential playoff matchups, gauging what would make this season a success for the Cowboys, and diving into subplots for Saturday. The NFL is moving forward with an L.A. Super Bowl after teasing Dallas earlier this week, we’re naming free agents who should return in 2022, Jerry Jones is pulling a player back from the past, and we’re mocking for new college prospects. That’s all up in News and Notes.

The Cowboys roster thins out further for Week 18, Antonio Brown could be a fix for the Dallas offense, and a maskless Amari makes waves. | From @ToddBrock24f7 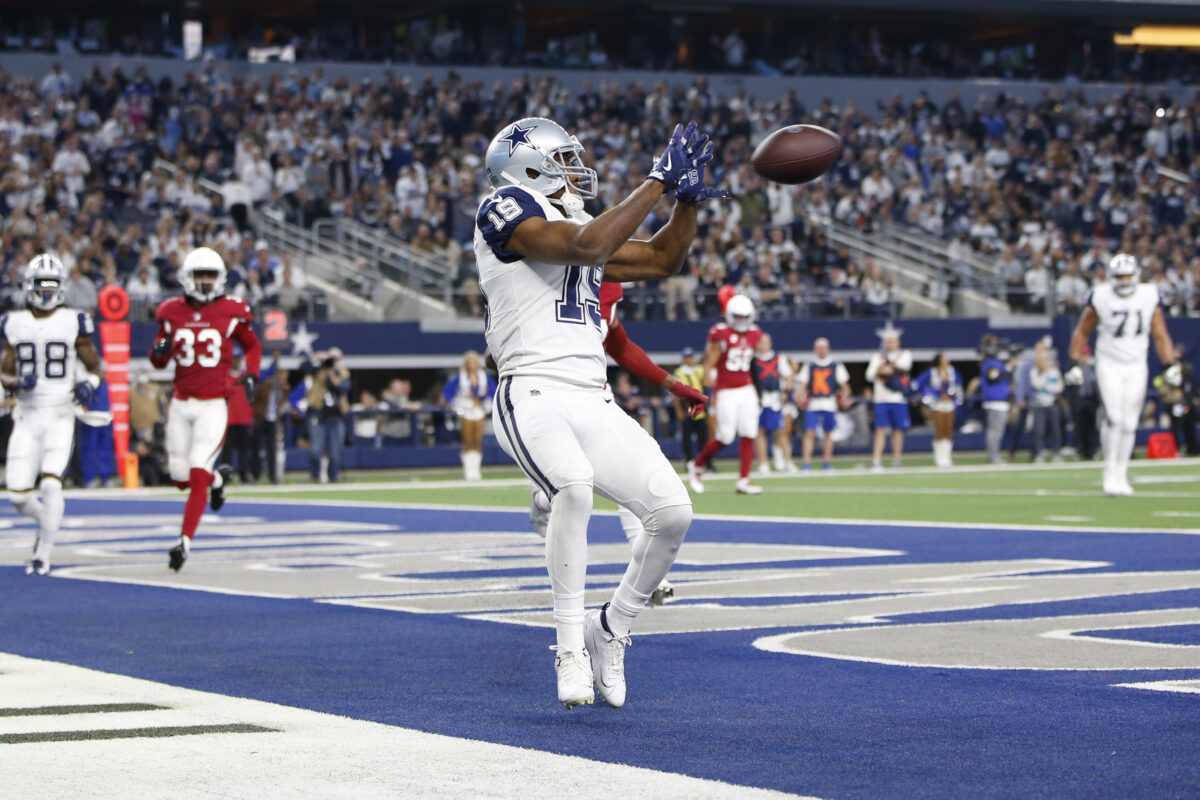 Twenty-two months after the pandemic started, COVID is wreaking more havoc with the Cowboys than ever. Two new starters have tested positive; they’ll join Micah Parsons in watching the season finale from home. Amari Cooper, who’s already missed time with the virus, could soon be missing a nice chunk of change for ignoring league rules about the virus. The COVID cases are already thinning the ranks of players available for Saturday’s game in Philadelphia; four additional key contributors are questionable with other issues.

Elsewhere, the Cowboys coordinators say they’re locked on the Eagles despite the Jaguars holding on Line 1, we’re troubleshooting Dak Prescott and what he needs to do to get back on track for the postseason, John Fassel is standing by his kicker after an up-and-down year, and whatever happened to that promise by Jerry Jones to put Jimmy Johnson in the Ring of Honor? We’re giving out final grades for the Arizona loss, remembering an unsung hero of the first great Cowboys teams, and cracking open a cold one developed by the most decorated passer in team history. Here are the News and Notes.

COVID continues to impact the landscape of individual teams and now it’s spread could be changing February plans for the league as a whole. | From @StarConscience 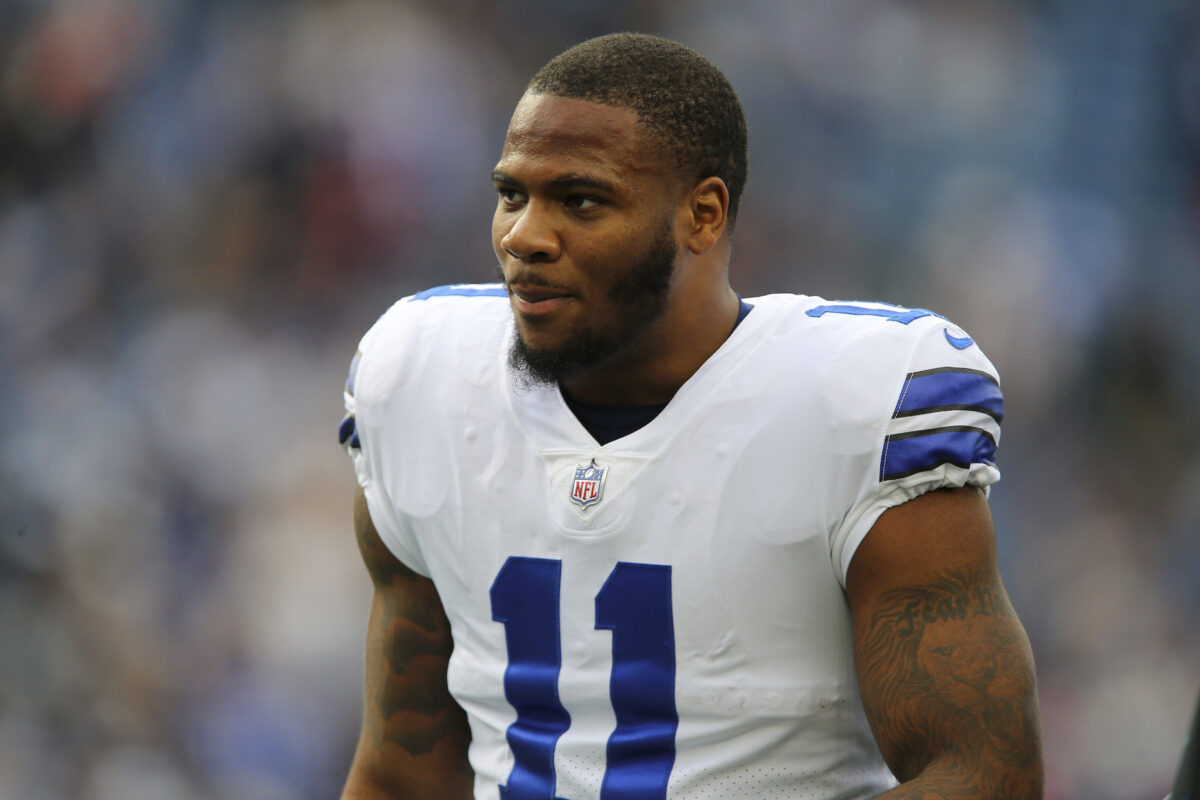 Micah Parsons is two sacks away from breaking the NFL’s rookie record but unfortunately, the sensation will likely miss out on his opportunity to achieve the milestone. His status for the Week 18 regular season finale against the Philadelphia Eagles in doubt. COVID cases are rising across the country and while the focus has been on how individual absences can affect any team, it could also lead to a change of venue for the Super Bowl. A possible replacement destination? AT&T Stadium in Arlington, Texas, home of the Dallas Cowboys.

The Cowboys are 11-5 and heading to the playoffs but they have been consistently inconsistent, leading to questions to how far they can advance. Kicker Greg Zuerlein being a major liability heading in the playoffs, observations from the Cowboys loss to the Cardinals, and more highlight the news and notes.