Njoku on the COVID-19 list and two others activated off of it led to a total of six moves by the Browns on Tuesday: 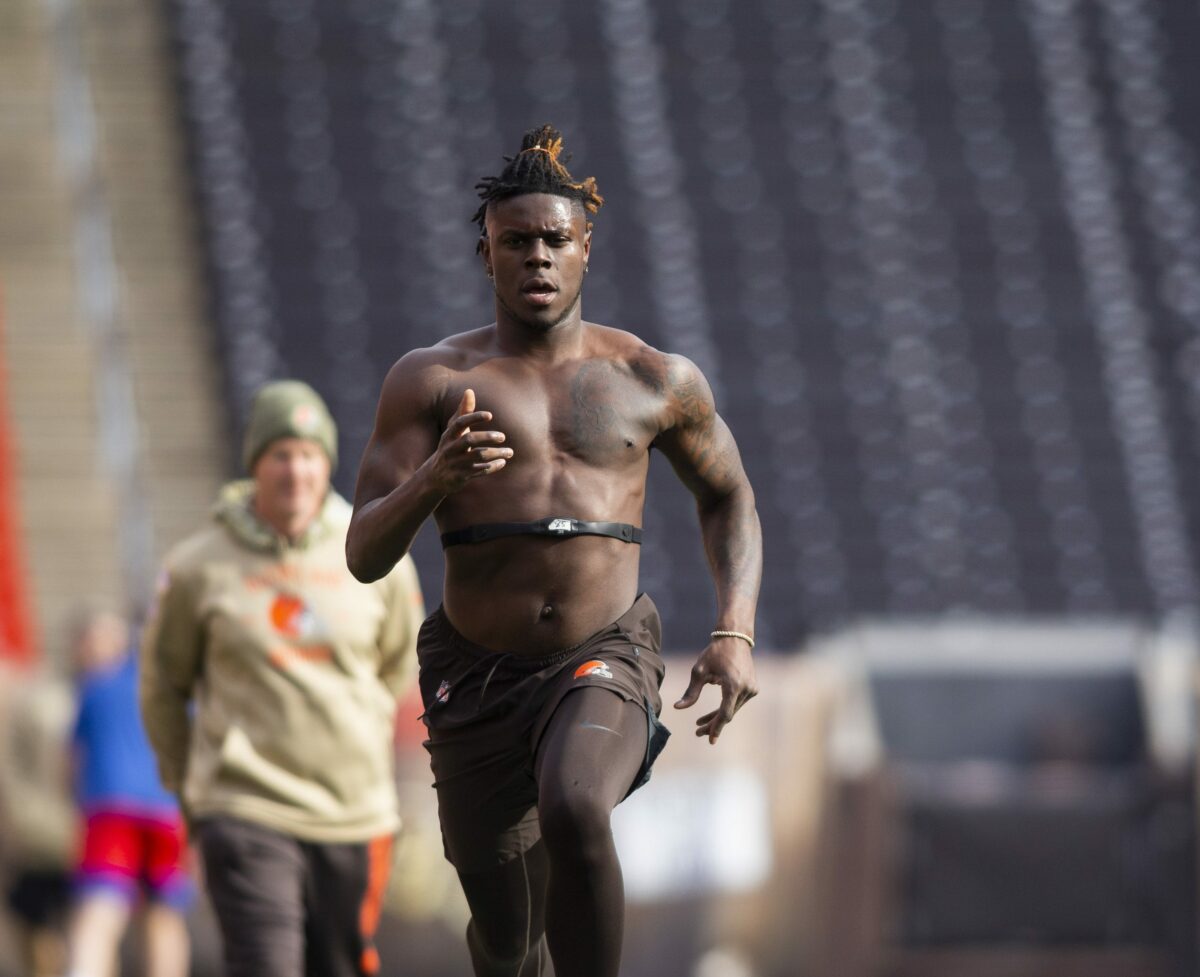 The Cleveland Browns continue to make a flurry of moves as they enter the most important stretch of their season. At 6-6, the Browns have five games against playoff contenders to finish the season. They may have to run the table to make the playoffs but the team has a chance to make the postseason.

Today came news that TE David Njoku was going to be placed on the reserve/COVID-19 list. His status for Sunday’s important game with the Baltimore Ravens is in doubt.

In a flurry of other corresponding moves at the position, the team replaced Njoku with TE Miller Forristall off their practice squad and signed TE Ross Travis to the practice squad.

A lot of movement that could be very short-lived depending on Njoku’s stay on the sidelines. When he is activated, Forristall will likely be waived and returned to the practice squad while Travis would be released.

We will keep you up to date on Njoku’s status as news becomes available. 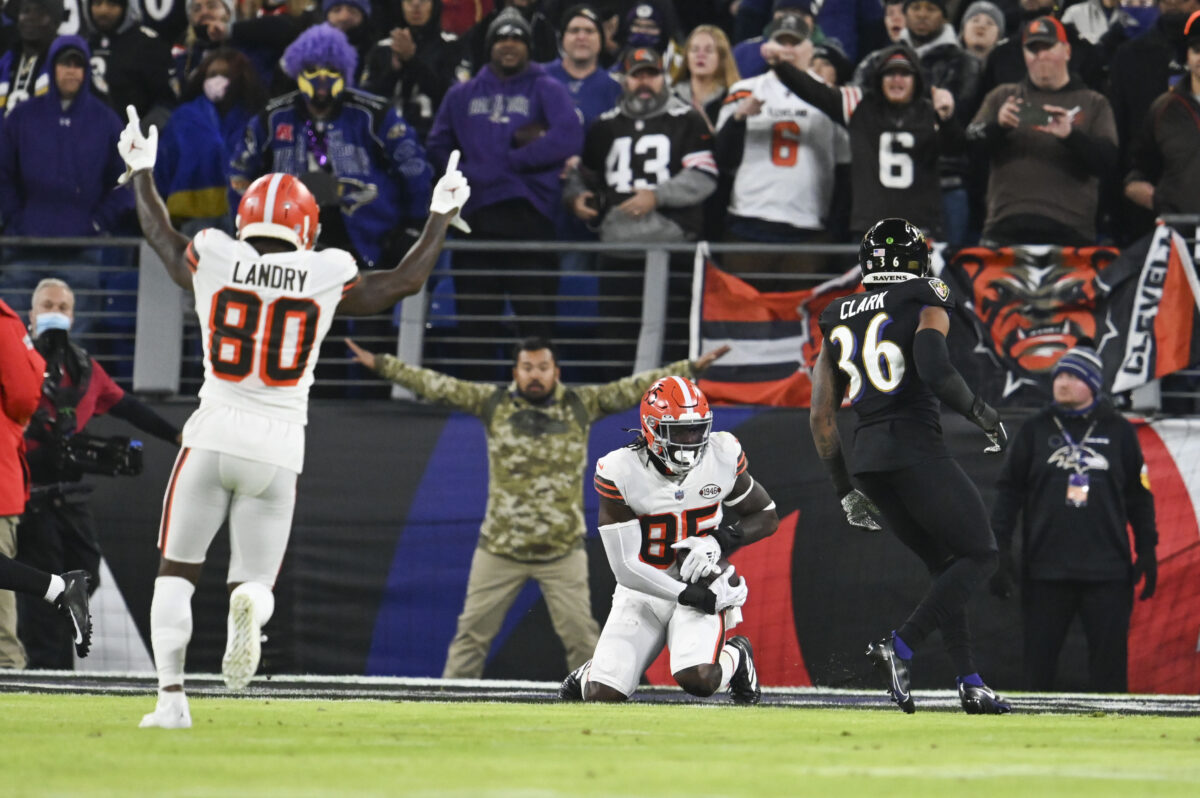 The Cleveland Browns finally scored a touchdown against the Baltimore Ravens when tight end David Njoku hauled in a low throw from Baker Mayfield in the third quarter of Sunday night’s game. Well, at least we think he caught it.

The different replay angles from the NBC broadcast feed were inconclusive. No matter what was ruled on the field was going to stand, and the officials called it a touchdown as the play unfolded. The ball might have hit the ground, it might have glanced off Njoku’s thigh, it might have done both, but in the end it was indeed a touchdown.

Here’s the catch in question:

The replay angle from the back of the end zone, looks like the ball maybe hit Njoku's leg and then the ground. Gonna be interesting.

Clearly going to be an incomplete pass.

You can’t tell for sure that it hit the ground. So it SHOULD stand.

I have no idea. 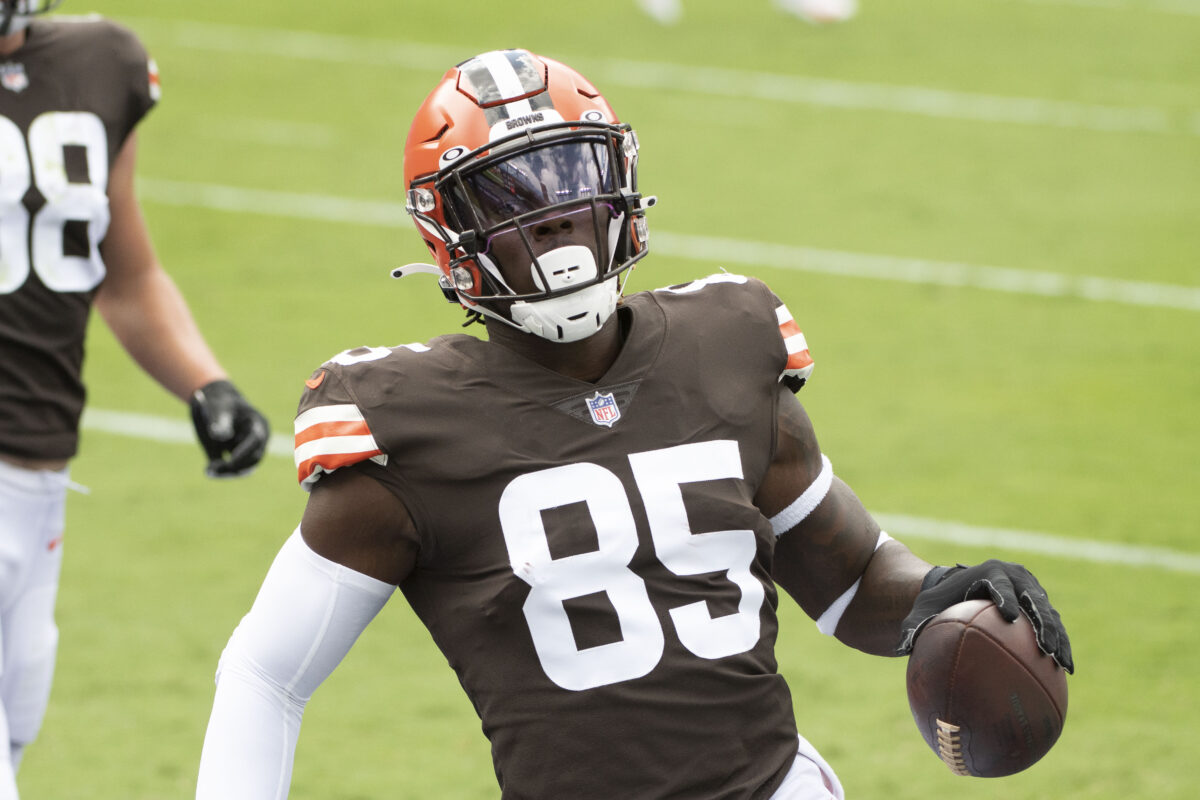 David Njoku might be entering the final year of his rookie contract with the Cleveland Browns, but the tight end isn’t looking to leave town. Njoku declared his desire to remain with the team and indicated he recently fired his agent to help make it happen.

“I’ve been here (Cleveland) for 4 years going on 5. I don’t know anything different. I want to keep being here,” Njoku said in his media session on Friday.

Njoku fired agent Drew Rosenhaus last week, and he made it clear in Friday’s press conference that the move was related to a conflict over his wishes to stick with the Browns. He stated he’s instructed his new agent, Malki Kawa, to try and work out a contract extension that would keep Njoku in Cleveland.

Last offseason, Njoku initially switched representation from Kawa to Rosenhaus, who immediately demanded the Browns to trade the athletic tight end. They walked that trade demand back when the Browns made it clear he was set to be an integral part of the team.

The season didn’t play out that way; Njoku started five of 13 games and managed just 19 receptions. However, he’s poised for a bigger role in 2021 and the team is one of the favorites to win the AFC, and Njoku wants to remain part of that as long as he can, while still cashing in. 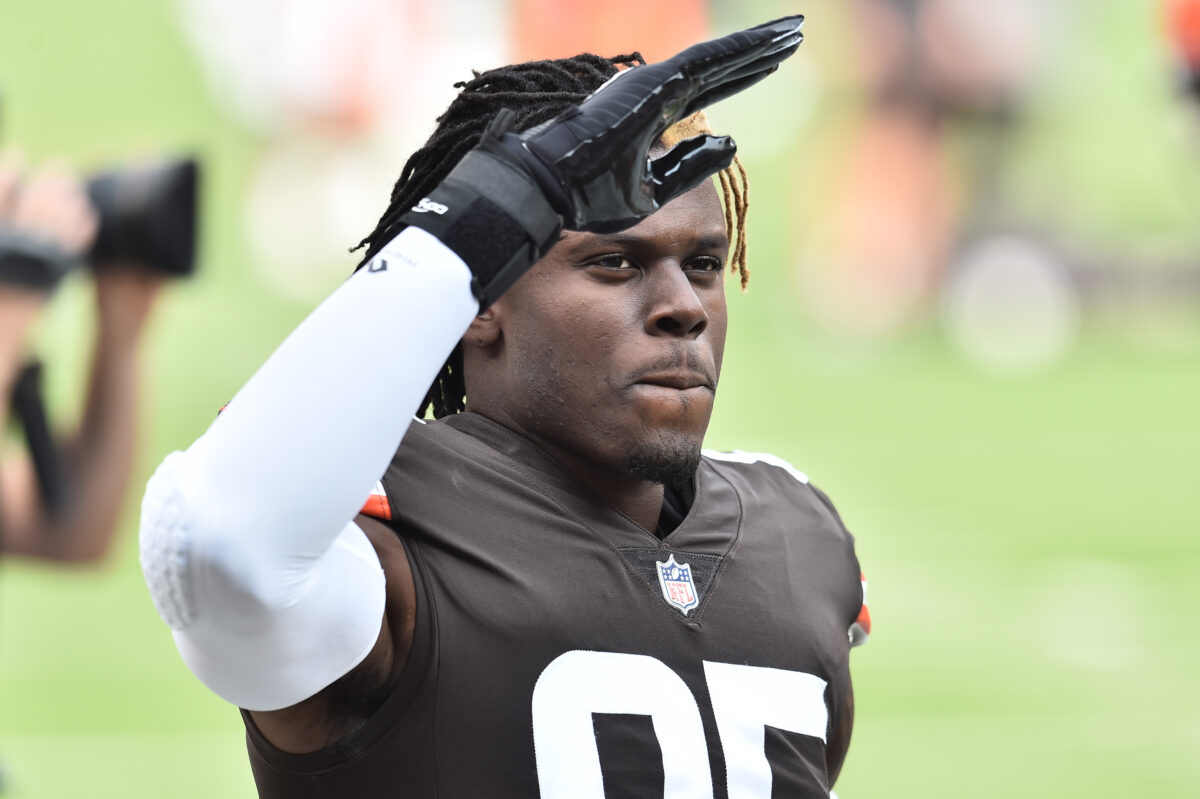 Normally it’s not a huge newsworthy event when a player parts ways with his representation, but Njoku’s status and history are a different story. Njoku switched from Kawa to Rosenhaus in the summer of 2020 and immediately demanded a trade from Cleveland. The trade demand was later walked back by Njoku and Rosenhaus when it was clear the Browns were not going to acquiesce to the oddly-timed demand.

Njoku is entering the fifth and final year of his rookie contract. The 2017 first-rounder will be a free agent following the season and figures to be one of the top tight ends on the market.

Per Justice, Kawa lashed out at Rosenhaus while welcoming Njoku back into the fold:

Kawa said "After being told and promised certain things, all of which weren't true, my boy David Njoku decided he has had enough and came home."

It’s unclear how the agent change will immediately impact the chances Njoku remains with the Browns beyond 2021, but dumping Rosenhaus should be seen as increasing the odds.

According to a report, David Njoku and the Cleveland Browns “in a good place” after last year’s trade demand which could set up a big year. 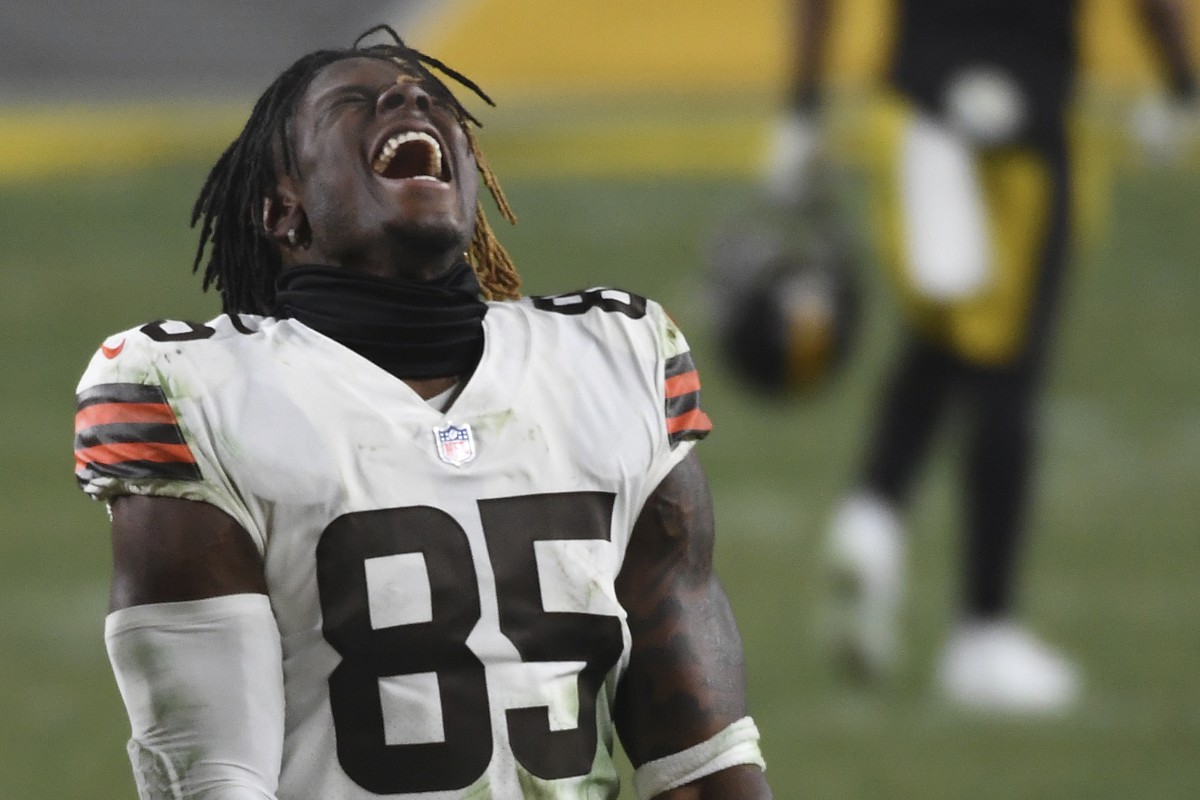 The Cleveland Browns, and their fanbase, are excited for all the new players added to their roster this offseason. The team added a ton of defensive talent as well Anthony Schwartz’s speed to the offense.

Returning players, either from injury or COVID-19 opt-out, should also bring a spark to the team.

One player whose presence rarely gets discussed is tight end David Njoku. After last year, when he requested a trade and seemed discontented with his place on the team, a quiet offseason is a nice change.

Last year, the Browns started using Njoku more and more as the season went on after picking up the fifth-year option on his rookie contract. In Week 1, Njoku was only on the field for 17 snaps (23%) but by Week 17 he was on the field for 49 snaps (79%).

While Njoku is set to be a free agent when the season ends, ESPN’s Jeremy Fowler is reporting that he and the team are on the same page and moved on from last year’s demand:

The Browns seemed to have weathered the storm with tight end David Njoku, who requested a trade last summer. I’m told per source that Njoku is in a good place with the franchise.

For the Browns, Njoku is their most athletic tight end in a system that values having two, or more, tight ends on the field as often as possible. While Austin Hooper was the big money addition last offseason, Njoku has a chance to stick around even longer if he has a good season in 2021.

The trade request last season was unlikely to be granted given the limited return the team could have received and the value they place on tight ends. This year, Njoku has a chance to set himself up for free agency on a winning team with a good offense and good quarterback.

Starting out “in a good place with the franchise” is the best way for both the team and player to achieve their goals in 2021. 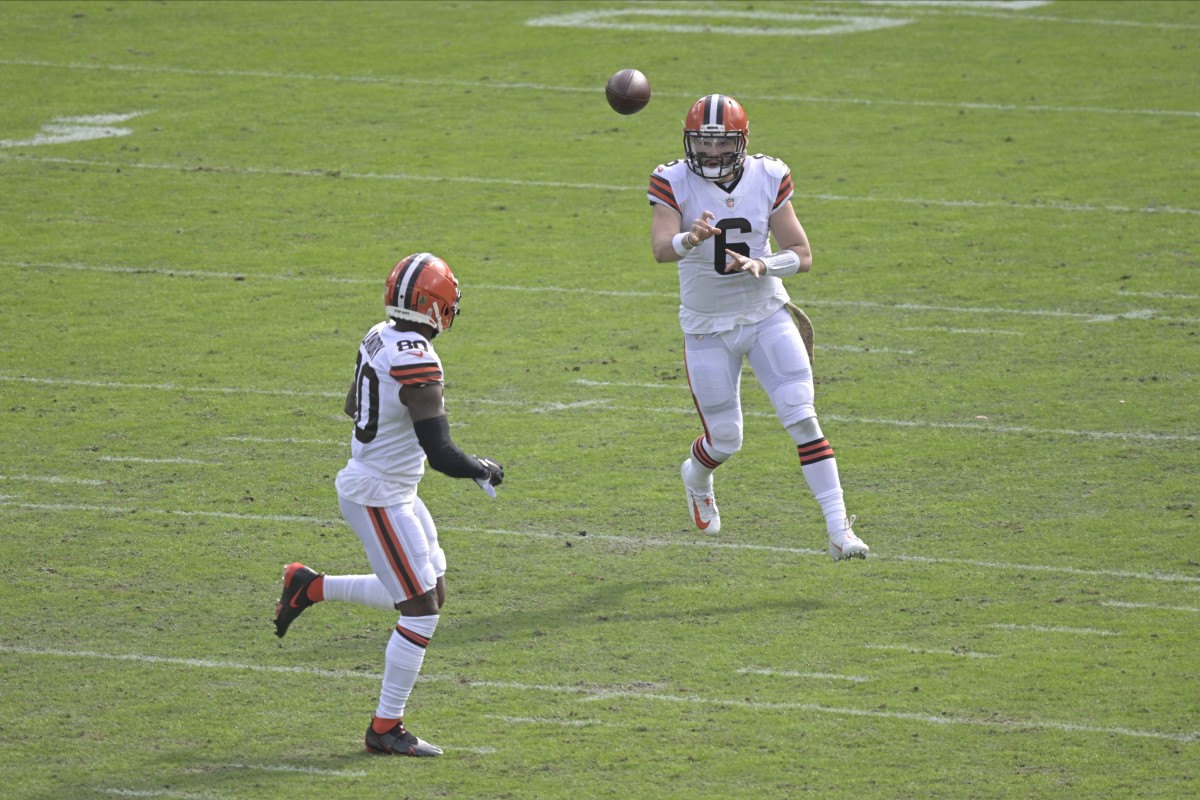 Three years ago, Baker Mayfield spent the NFL draft day waiting to hear the Cleveland Browns call his name with the No. 1 overall pick. This year he’s spending it in Florida while working out with several of his Browns teammates.

Mayfield was captured in several photos from Lew Rice on Instagram working on throwing and offensive scheming at House of Athlete in Florida. Among the Browns’ targets in attendance at the popular training center in Miami are Jarvis Landry, David Njoku, Rashard Higgins and Austin Hooper.

The Browns players did this on their own. After skipping the recent voluntary workout sessions as recommended by the NFLPA, it’s great to see Mayfield and his receiving corps still dedicated to improving this early in the offseason. 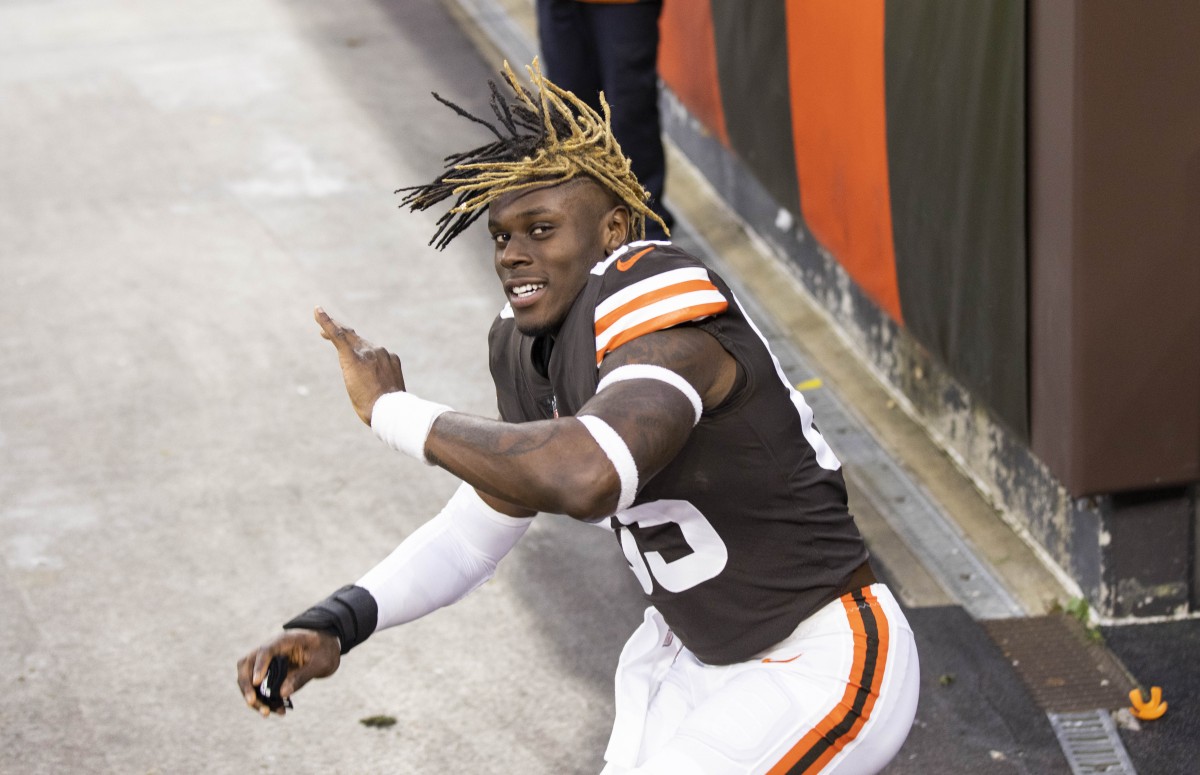 Browns tight end David Njoku joined the Jim Rome Show during the Super Bowl week to discuss the Browns successful season, his status with the team and teammates and more. Njoku made some intriguing comments to Rome, who was one of the Browns’ biggest cheerleaders amongst the national media last season.

Njoku talked about his personally trying year, noting he “learned a lot about myself through adversity, physical and mental.”

As for the team aspect, Njoku echoed what other Browns have said,

“We’re proud in that standpoint but obviously we’re not really happy that we just got that far. We wanted to go as far as possible. It is what it is … get back to work.”

Njoku also volunteered that he and teammate Austin Hooper, who took over his role as the primary tight end, have become very close friends.

“Austin is one of my best friends right now. Just this past month that we’ve hung out, that guy and I, we’ve been through a lot, training together a lot,” Njoku said. He also spoke well of 2020 rookie TE Harrison Bryant.

It’s an interesting peek behind Njoku’s curtain and one that reveals a player who sure sounds like he thinks he’ll be back in Cleveland.

Does David Njoku still want to be traded away from the Cleveland Browns? The Browns tight end, who rescinded an earlier trade request, denied a new report that he now wants out again.

According to a Monday report from Mary Kay Cabot of cleveland.com, Njoku once again wants to be traded away from the Browns before the Nov. 3rd trade deadline. It comes a day after Njoku caught one of his three targets in the 38-7 loss to the Steelers, gaining just seven yards.

But Njoku jumped on Twitter and quickly shot down the report, saying he has not said anything of the sort to Cabot.

It’s important to note Cabot did not specifically cite Njoku as her source for the report. But Njoku’s response is not consistent with someone who is anxious about being dealt, either. 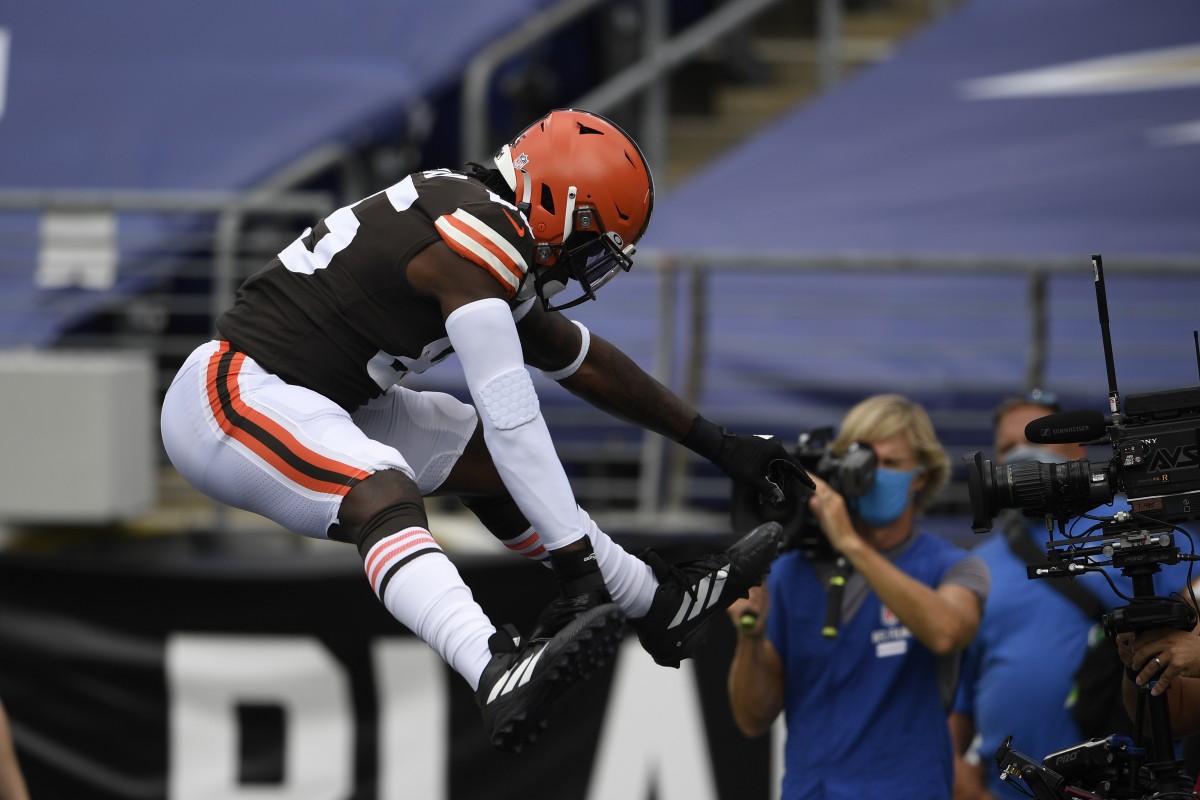 Kevin Stefanski proved a man of his word, and quickly. On Friday, Stefanski stated that the team was set to activate tight end David Njoku from injured reserve before Sunday’s game. On Saturday, the Browns officially followed through on Stefanski’s proclamation.

Njoku will be eligible to play on Sunday against the visiting Indianapolis Colts. He has missed the last three games.

The Browns have 21 days to fully activate Njoku off I.R. 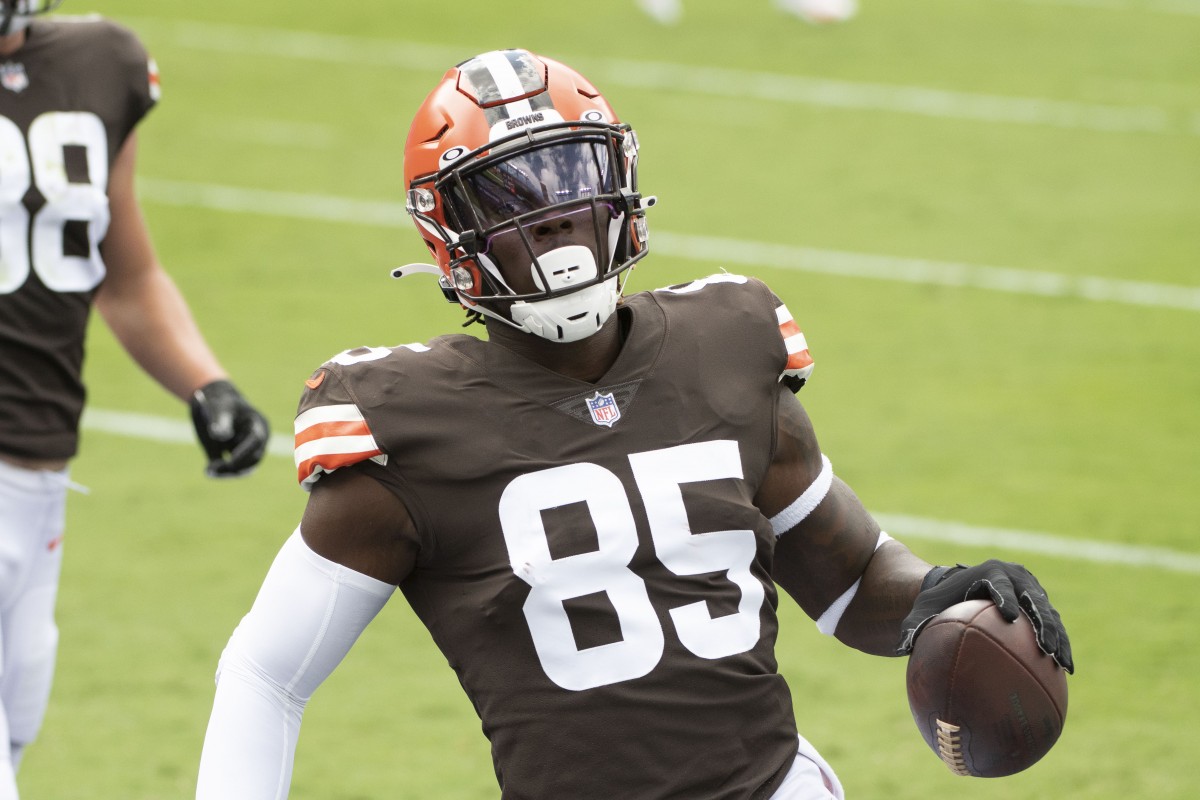 The Cleveland Browns have designated tight end David Njoku for return from the injured reserve list.

It’s a formality but a necessary one for Njoku to return to the Browns active roster. The team has 21 days to decide to activate Njoku, during which time he is able to practice and attend all team meetings and training functions.

Njoku has been on I.R. since after Week 1, a game where he played quite well (50 receiving yards, 1 TD). He injured his knee in the loss to Baltimore. The injury did not require surgery.

He would be the first Browns player to return from I.R. under the new rules implemented for 2020. Players can return after just three weeks and there is no limit to the number of players who can return from the injured list.