After Jayson Tatum’s 49-point explosion against the Heat on Wednesday, it’s an understandable position. 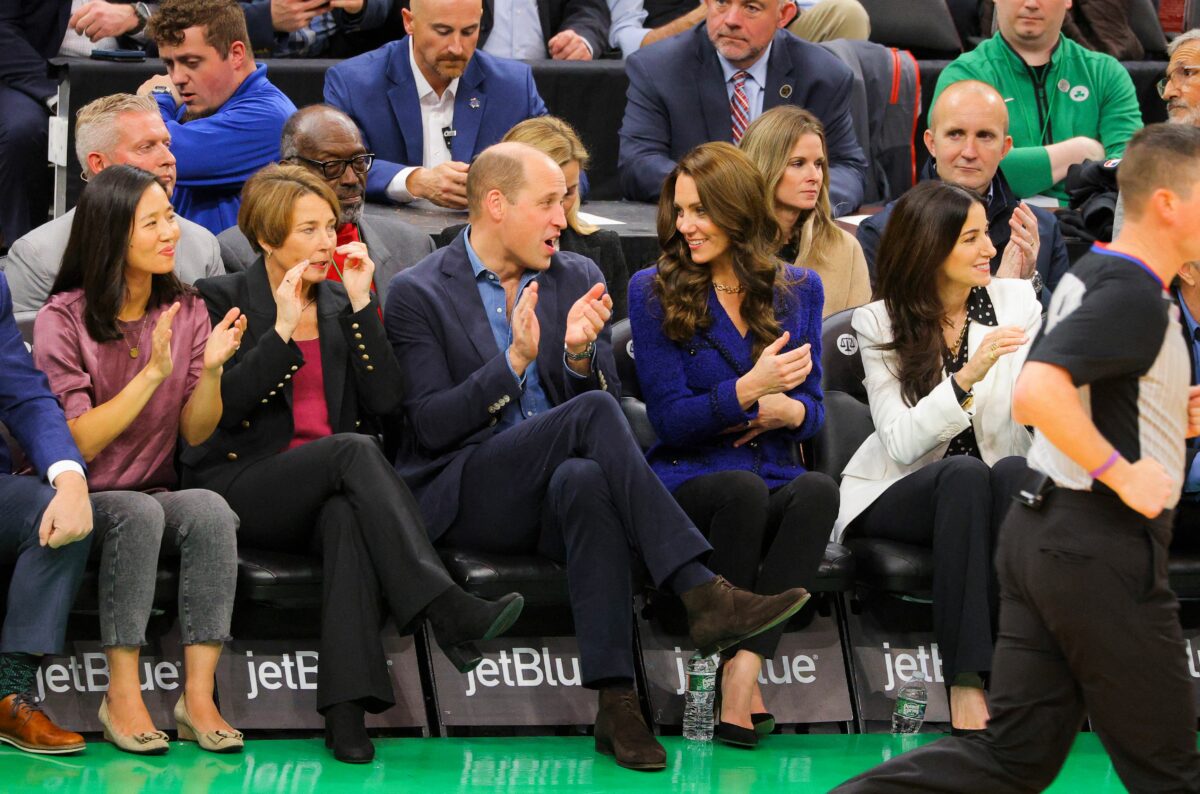 It remains to be seen whether it will reduce the smattering of boos received by the royal couple on their visit to TD Garden last Wednesday night as they witnessed the Boston Celtics defeat the Miami Heat, but the Prince of Wales let it slip that he (and perhaps the Princess of Wales Kate Middleton) is/are fans of the Celtics.

Speaking a clip to a fan in a video circulated by the People Magazine Instagram account, Charles revealed his fandom for Boston’s NBA team, noting “if the Celtics hadn’t won last night, we’d probably never be able to show our faces — I’m quite relieved they won; it’s a good job.”

It seems the House of Windsor is finally over that whole Boston Tea Party kerfuffle all those years ago thanks to the wizardry of the soon-to-be-coronated king of the NBA Jayson Tatum.

After the 49-point, 11-rebound masterpiece William and Kate witnessed, it’s understandable why one would follow the Celtics, after all. From one (future) dynasty to another, we suppose.

The former No. 2 pick supports Kornet’s hand-birds and the team that generates the dunks behind them. 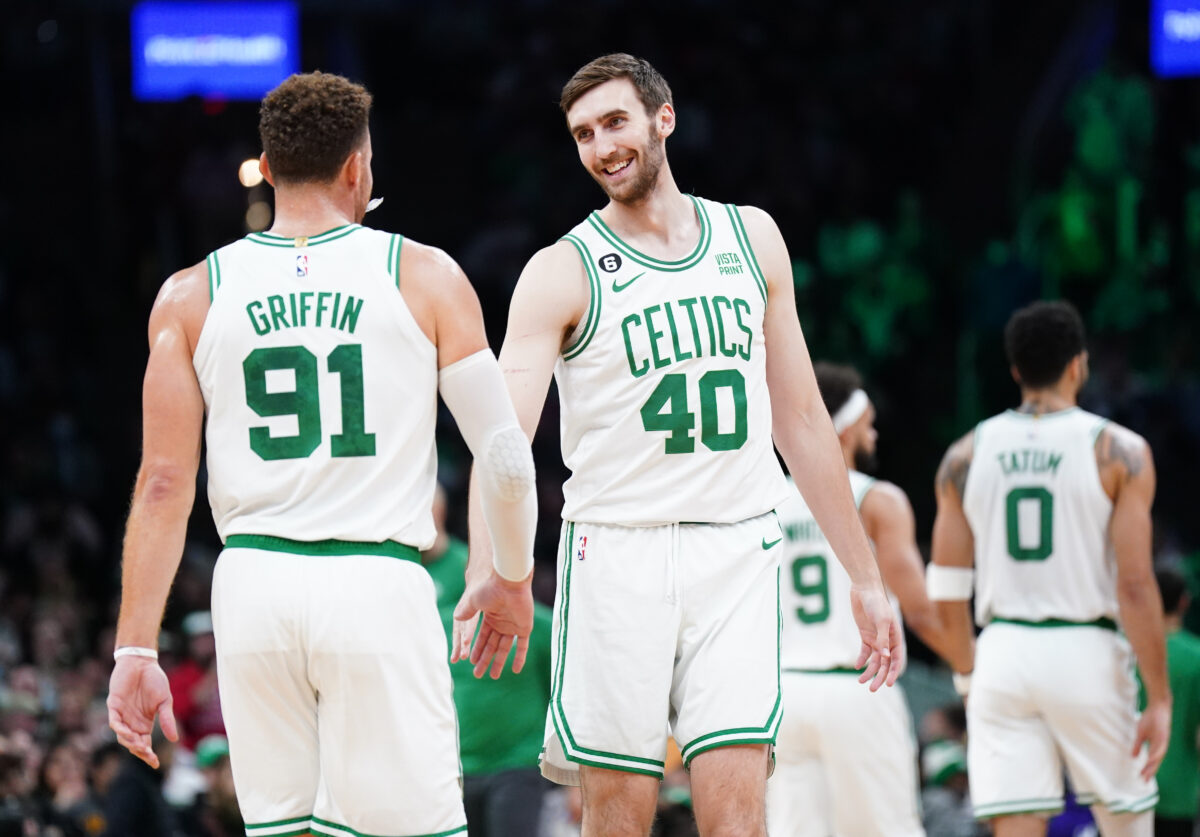 Stromile Swift may have been out of the league for some time, but his explosive athleticism and slam dunk celebrations are still on the minds of NBA players today.

When Boston Celtics backup big man Luke Kornet borrowed Swift’s bird-like hand gesture to celebrate a dunk of his own and revealed Swift was the inspiration for it, word swiftly (pun intended) made it back to the former LSU standout.

“I thought the celebration was good, but the interview was even better,” said Swift of Kornet’s cribbing his post-dunk celebration via NBC Sports Boston’s Chris Forsberg. “I’m just happy some of these younger guys still remember me.”

For Swift, it was also a mark of the camaraderie shared by the Celtics.

“You can see how much those guys enjoy playing with each other,” said the nine-year NBA vet.

“It’s a long season, you’re traveling all over the country, and you don’t always have that sort of relationship with guys. You can see those guys are having fun out there.”

The best holiday gift ideas for any Boston Celtics fan in your life. 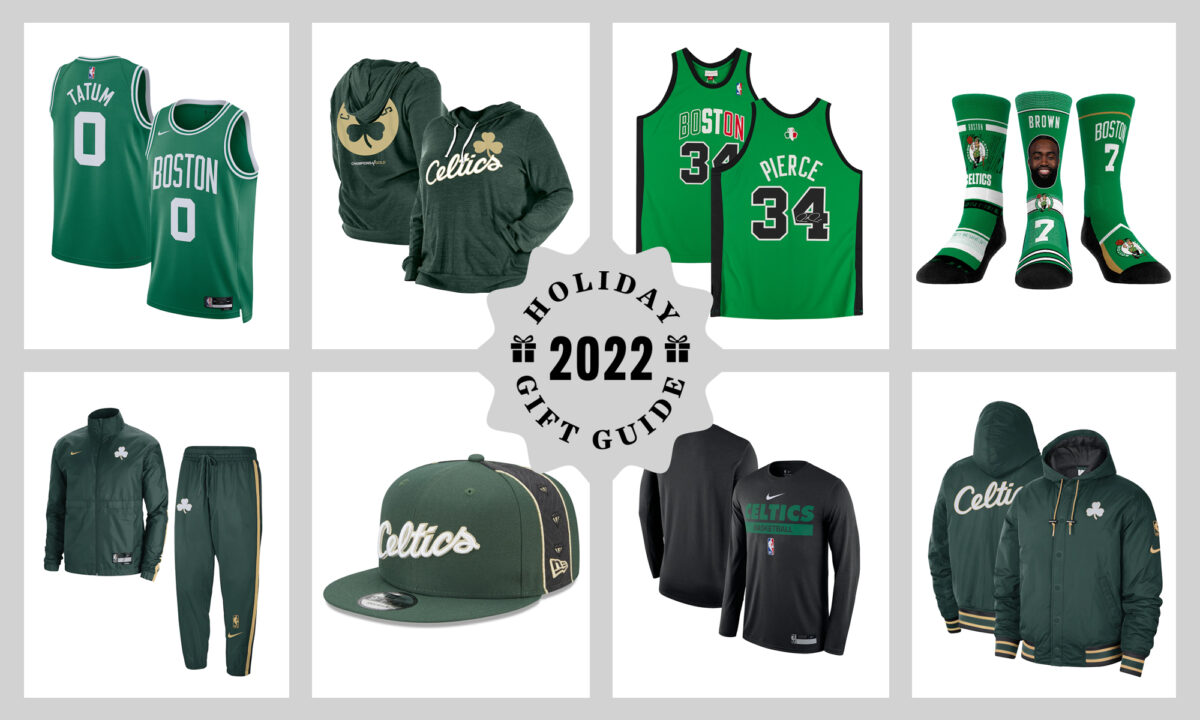 Fresh off an Eastern Conference Championship, the Celtics have started the season hot, and Boston’s recently-released City Edition apparel has been flying off the shelves.

Whether your favorite Celtics were led by Bill Russell, Larry Bird, Paul Pierce or Jayson Tatum, we’ve got something for you on our list of best gifts for Celtics fans.

Fanatics is offering 30% off all orders on Cyber Monday, so take at least 30% off the prices in the list below and get the perfect gift for the Celtics fan in your life.

Sometimes, when the meat of an NBA season is just too well done, and too many cooks are spoiling the stew, one just has to sit back and call in the experts. 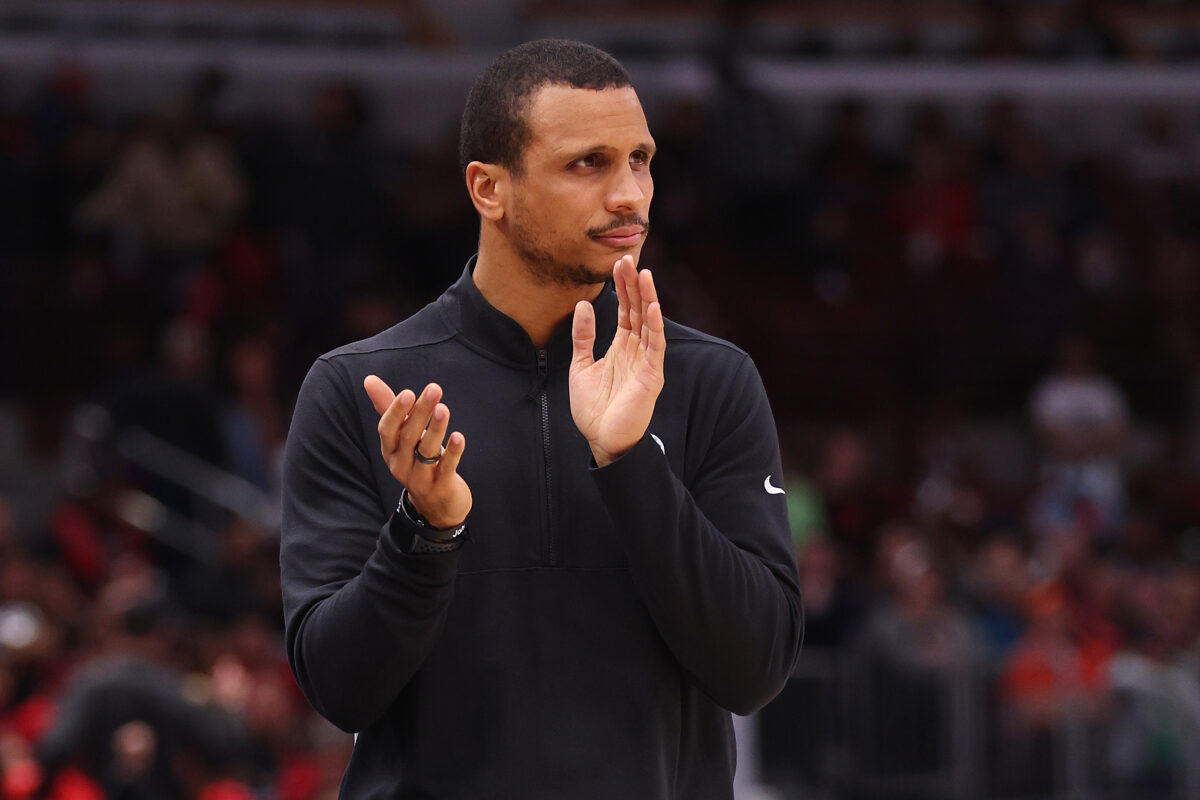 Sometimes, when the meat of an NBA season is just too well done and too many cooks are spoiling the stew, one has to sit back and call in the experts.

With the Boston Celtics cooking the rest of the league (besides the Chicago Bulls anyway), some of their players are in the running for MVP and others are struggling with social media, the hosts of the CLNS Media “Celtics Lab” podcast brought out the big guns to make sense of it all.

Join your usual hosts Alex Goldberg, Cameron Tabatabaie and Justin Quinn as they turn over the reigns of the Lab to Sheehan as we break with our usual footing on podcasting about the Celtics in a moment we felt a lighter approach to coverage might help get us through an early season malaise caused as much by the person running Twitter as what people use it for.

For those of you confused by satire, this episode is (mostly) that before the 35-minute mark.

Those of you not picking up on what the “You Know Ball” podcast host is laying down, we’ll return to our usual format next week — but until then, buckle up.

Nearly all good news, at that. 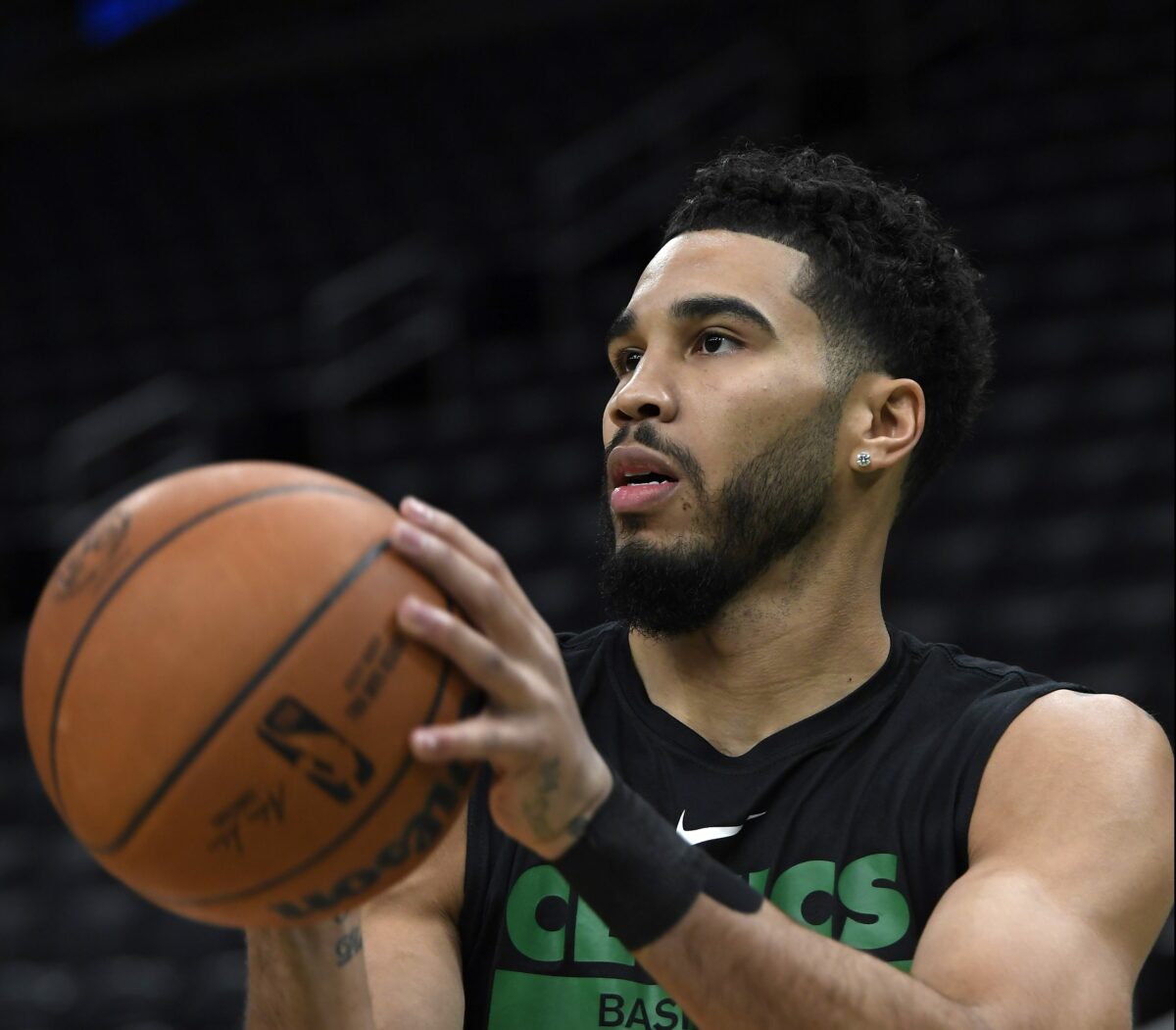 Throughout the course of every NBA season comes the inevitable adjustment of player ratings in the popular basketball simulation series NBA 2K for the NBA 2K 23 edition. And at roughly an entire month into the 2022-23 campaign, multiple Boston Celtics players find themselves impacted by the latest updates heading into the thick of the season at hand.

With the team’s two star wings and boosted bench propelling the Celtics’ offensive game to literally historic levels, some changes based on the play of that end of the court will be in order. And some subpar-but-improving defense ought to also impact this latest batch of rating adjustments.

Let’s take a look at who was reassessed to what rankings as of the fourth week of the month of November in the 2022-23 season.

New episode of the Celtics Lab Podcast on YouTube ☘️📺

Fact, fiction, or too soon to tell with @ChrisForsberg_

You need to hear this “biohack” from the man himself. 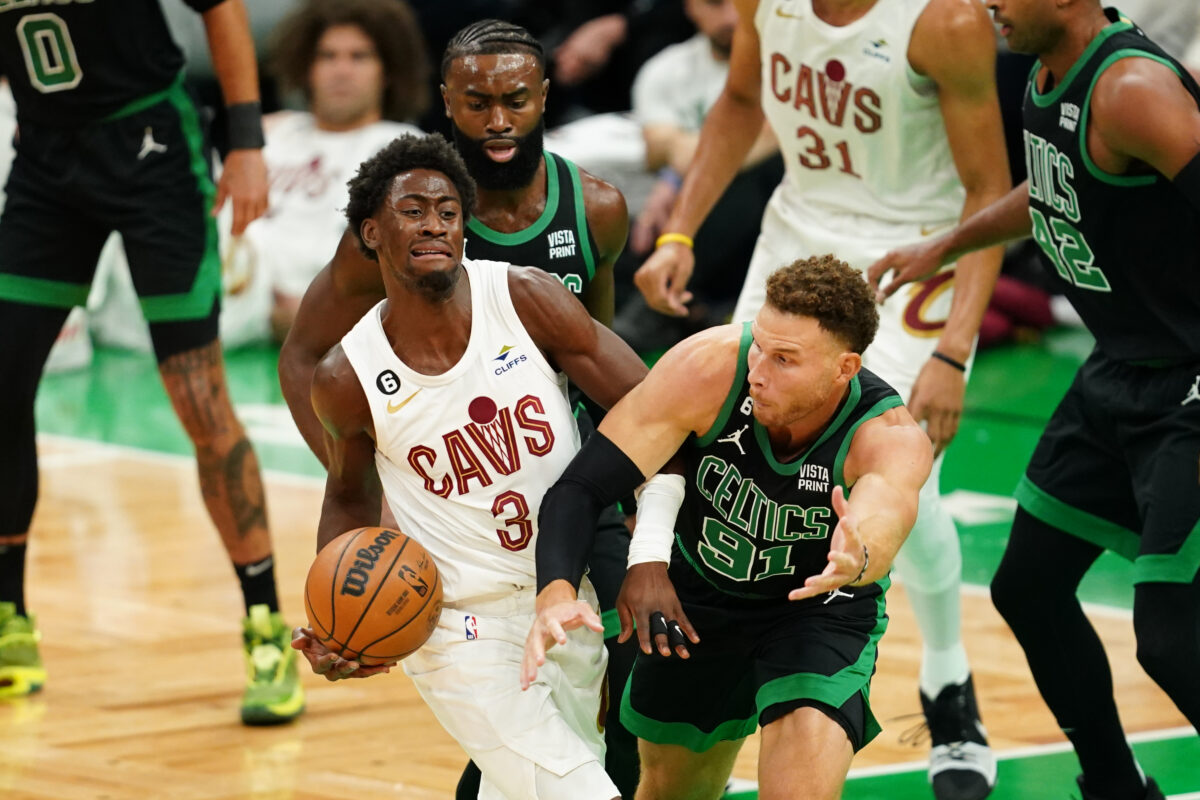 If you ask veteran Boston Celtics big man Blake Griffin how he has managed to keep his NBA career alive so long, part of the answer you would likely hear is how seriously he takes what he calls “biohacking” his body through nutrition and exercise.

Taking care of one’s body to extend a career in the Association is nothing new. Plenty of careers have gained new or extended life after players gave up low-quality food and poor fitness regimens.

But the onetime University of Oklahoma star takes things a step further than most, eschewing microwaved food whenever he can, a detail he shared in an interview with the eponymous host of the “In Depth with Graham Bensinger” show.

Take a look at the clip embedded below to hear all of the Boston big man’s thoughts about staying healthy to stay in the league.

For sneakerheads to those on the market for new shoes, this is to get you up to speed on what Boston’s players wore on the parquet. 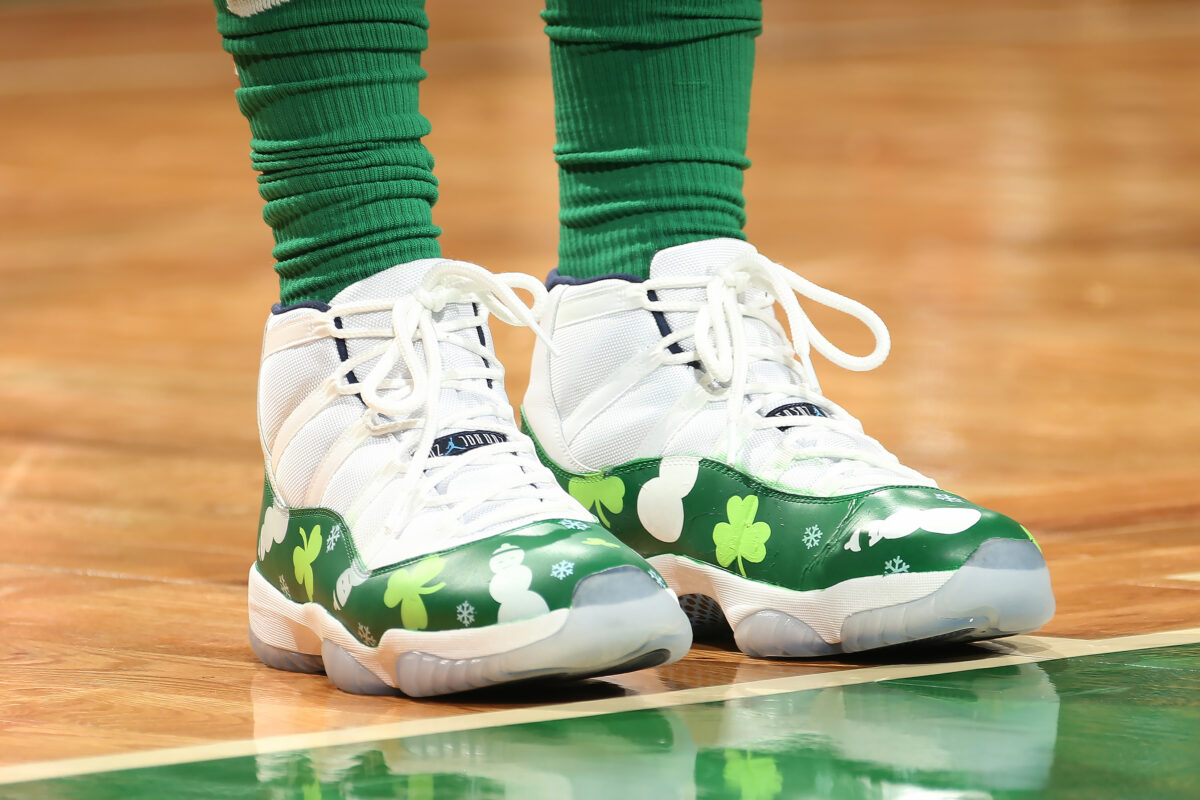 The Boston Celtics may not have gotten the result they wanted on the court with a second overtime loss in their rematch playing against the new-look Cleveland Cavaliers on this past Wednesday night. But we did get a look at the kicks the Celtics wore on the court, the jury of course being out on whether any of them had enough buckets in them, to paraphrase Celtics alumnus Isaiah Thomas.

For the proud sneakerheads among us, as well as those dipping their toes in the sneaker aficionado pool — and even those kicks agnostic folks reading this who might just so happen to be on the market for some new shoes — this is the article to get you up to speed on what Boston’s players elected to don on the parquet.

Let’s take a look at the sneakers worn by the Celtics against the Cavs in their 114-113 loss to Cleveland on Nov. 2.

The Nets and Celtics have been entangled for nearly a decade, but antisemitism and Ime Udoka have added a dark new wrinkle. https://t.co/rfow6RD5of

Get a sneakerhead point of view on the Duke alum’s ties to Nike and those who live for fresh kicks. 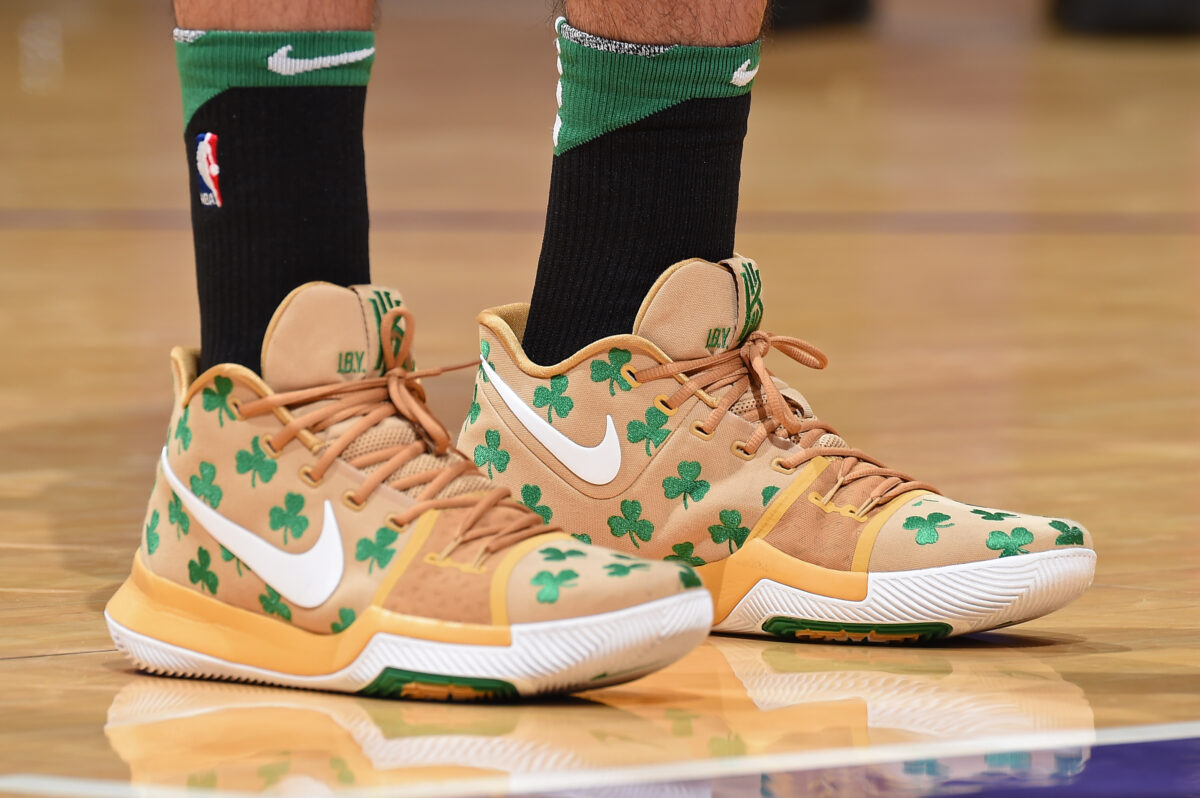 Superstar Boston Celtics forward Jayson Tatum has a secret pair of sneakers stashed in his house. They do not have magic powers or anything like that to the St. Louis native. They are an unreleased design that will one day hit sneaker retailers around the world as a result of his ongoing partnership with Nike’s Jordan Brand.

In a recent interview with the eponymous host of the “In Depth with Jason Bensinger” show, Tatum spoke about his ties to the popular shoe company, his relationship with senior color designer Kelsey Amy to reflect his personal touches to the shoes bearing his name, and plenty more you never knew about being a signature sneaker athlete.

Take a look at the clip embedded below to get a sneakerhead point of view on the former Duke standout’s ties to Nike and those who live for fresh kicks.

The Celtics and Sixers stars may be friends in real life, but not in this new series. 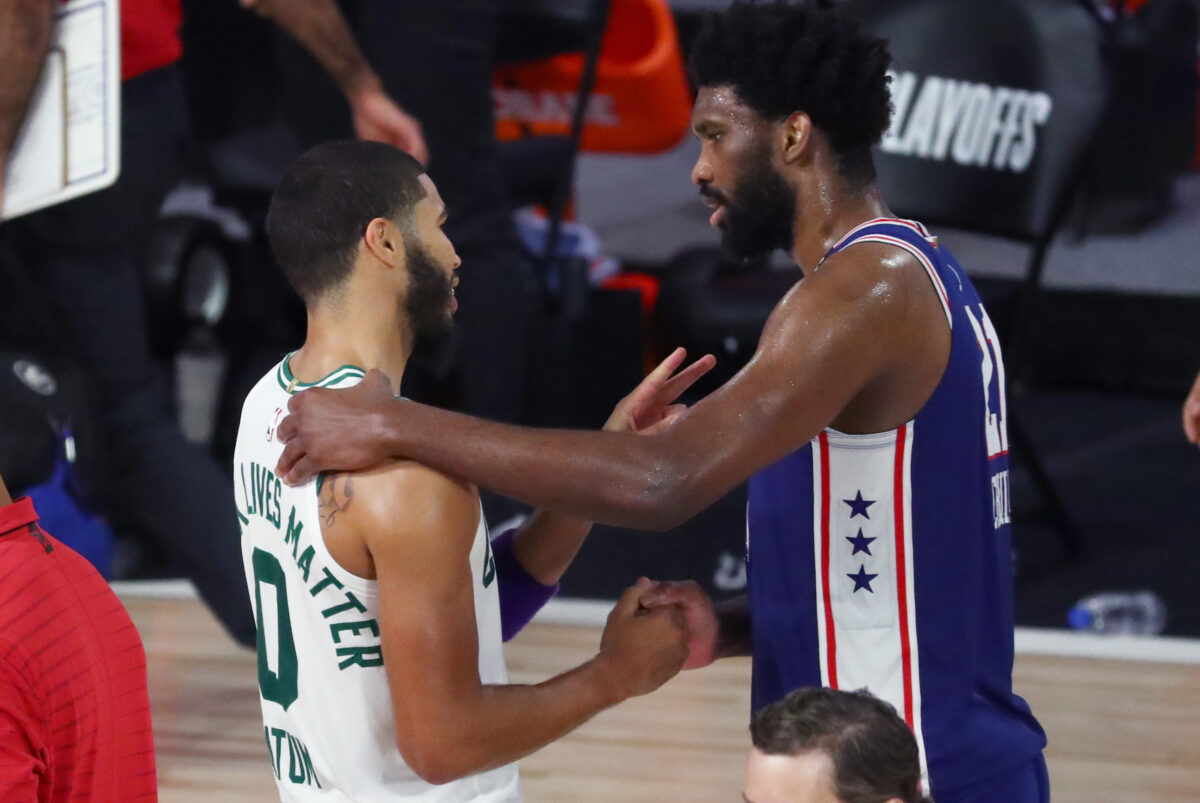 While the same can’t be said of all Boston Celtics, superstar Celtics forward Jayson Tatum and Philadelphia 76ers big man Joel Embiid are not only friends off the court but share a trainer in Pure Sweat’s Drew Hanlen.

But in the cartoon world that is the new Bleacher Report animated NBA-influenced series “Hero Ball,” the Sixers center and Boston forward are mortal enemies at the start of episode 1 of the cartoon in the vein of the “Game of Thrones” spoof “Game of Zones” Bleacher Report has done in the past, populated with the likenesses of popular NBA personalities.

You will have to watch this one for yourself to see what the series is about as the two Atlantic Division rivals battle to be the face of the league in cartoon fashion, but it is definitely worth a watch if you have yet to see it.

The NBA season is here and we have everything you need to support your Celtics this year.

The NBA season tips off on Tuesday, Oct. 18 when the Celtics host the Philadelphia 76ers.

Though this Celtics team experienced some offseason turmoil, they are still among the favorites to not only repeat as Eastern Conference champions, but win the 2022-23 NBA Championship.

Like the team itself, Celtics fans have their sights set on another deep playoff run.

We are doing our part to get you ready for tipoff with a list of some of the best Boston Celtics gear and apparel to get you hyped for the new season.

We occasionally recommend interesting sports products. If you purchase a product by clicking one of the links, we may earn a referral fee.