James Harden’s performance has been scrutinized but LeBron James believes their defense is a credit to Harden’s excellence. 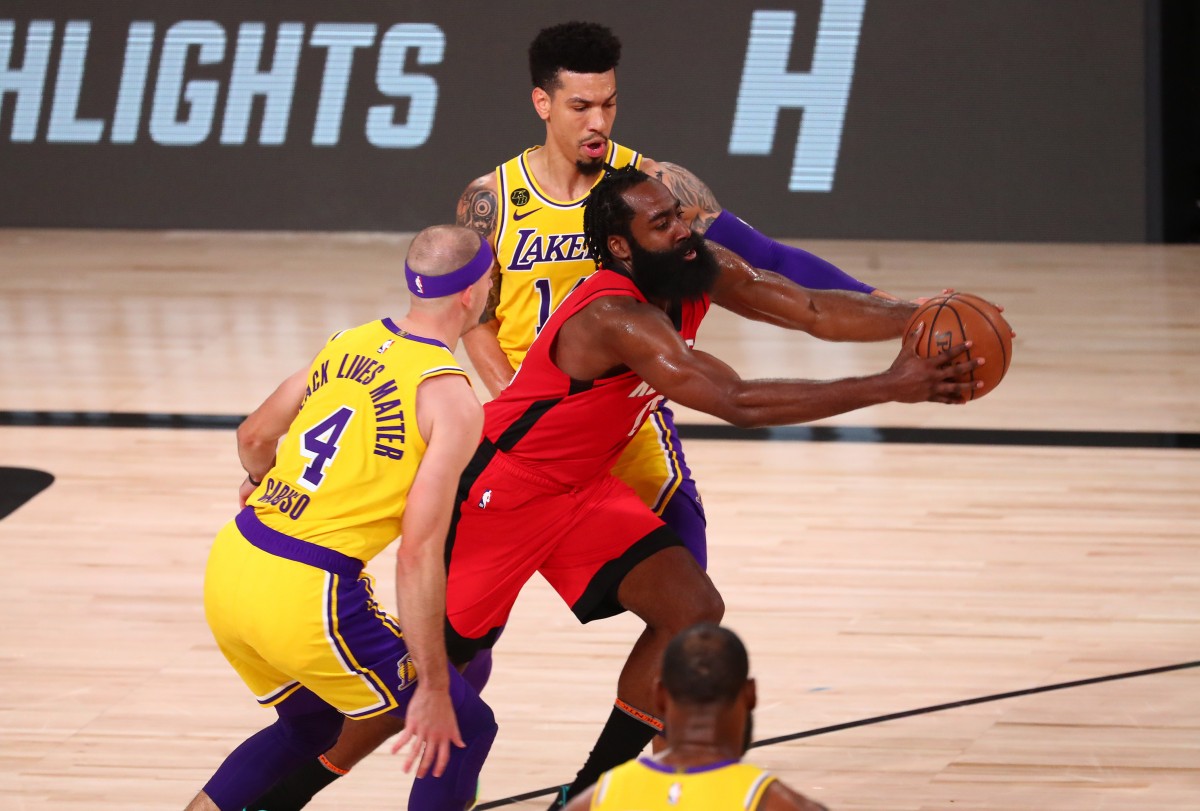 With the Los Angeles Lakers taking a 3-1 lead over the Houston Rockets and James Harden struggling from the field against L.A. in last night’s Game 4 loss, many have turned the current status of the series and the likely result of a Lakers win as a referendum on the legacy of Houston’s MVP. But while the Los Angeles Lakers have focused their defense on slowing down Harden and forcing the ball from his hands, that’s a sign of respect, according to LeBron James.

James called Harden one of the best offensive players the NBA has ever seen, according to ESPN’s Dave McMenamin.

Harden had a rough game in Game 4 but he’s actually been pretty solid, shooting 47% from the field and 41% from the 3-point line in the four games in this series. But the Rockets deficiencies, whether it be a lack of true size or the poor play of Russell Westbrook, as well as the excellence of the Lakers two stars, have torpedoed what good play Harden has had over the four games of this series.

While working for TNT, Draymond Green said that Phoenix’s Devin Booker has to leave Phoenix. Tampering much? 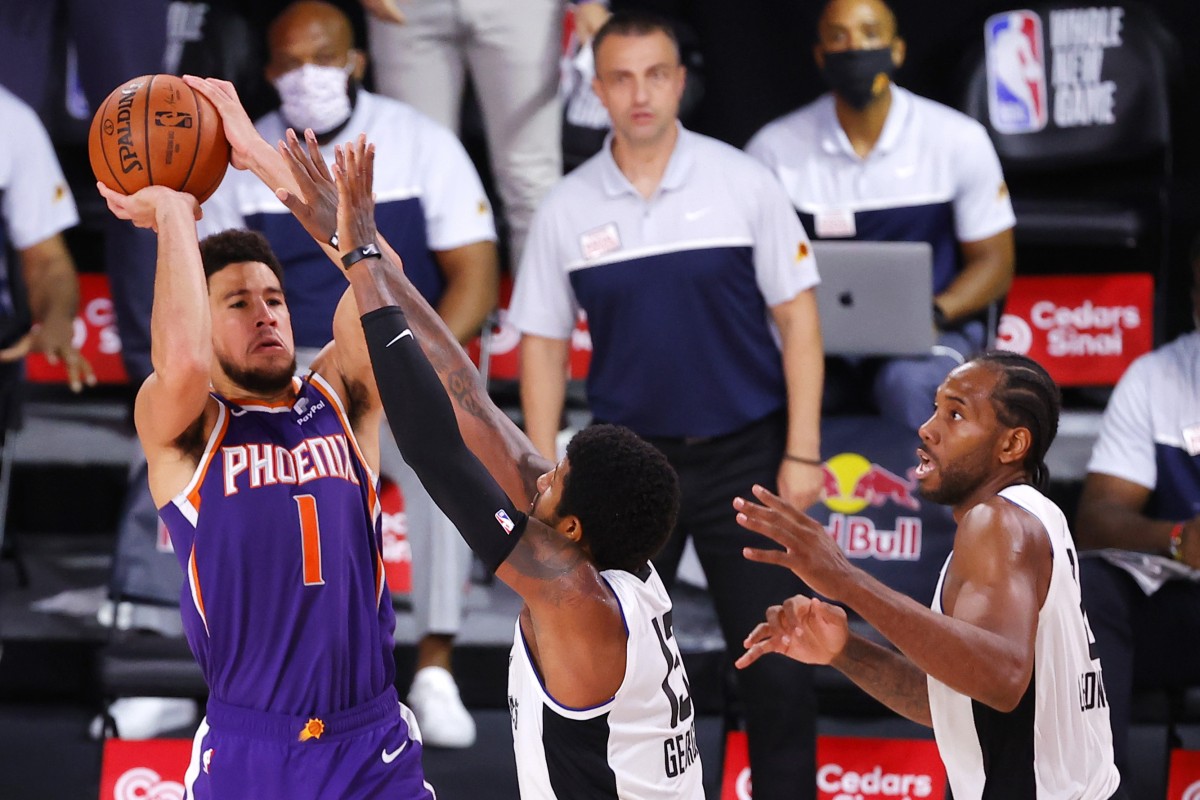 There was a lot of talk going into the NBA Restart that the Orlando Bubble would be a hot spot for tampering in the NBA and the potential formation of another super team down the line. But being outside of the Orlando Bubble isn’t stopping Golden State’s Draymond Green for engaging in some of the most blatant tampering moves we’ve ever seen.

During the pregame show of the NBA on TNT, where Green will be in the studio for the duration of the NBA season and the NBA Playoffs, Green said that Devin Booker of the Suns, arguably the best player so far in the bubble, needs to get out of Phoenix.

Just in case you were wondering, Booker isn’t due to be a free agent anytime soon. He signed a 5-year extension in 2018 that will keep him in a Suns uniform through the 2023-24 season. Obviously, Green, who was a big reason why Kevin Durant came to join the Warriors, is always on the lookout to get better. It’s clear he would rather see Booker on his side than having to guard him for years to come. 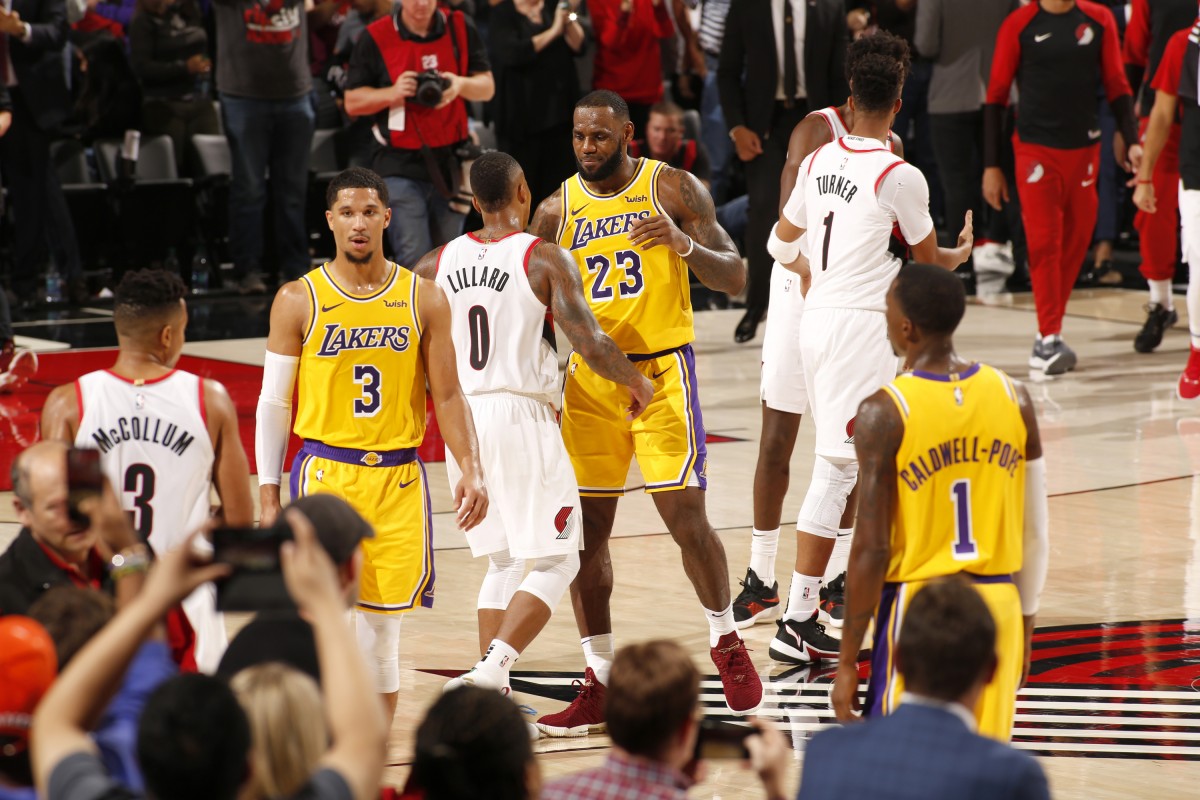 Even though we are all stuck at our homes, with the exception of the Dallas Cowboys, last night was still Saturday night and lots of people found different ways to have a little bit of extra fun. While some were locked into last night’s battle between RZA and DJ Premier for hours, there were a couple of other stars that stayed up last night on Instagram Live: Los Angeles Lakers forward LeBron James and Portland Trail Blazers guard Damian Lillard.

Of course, it didn’t take much for Lakers fans to turn this into potential recruitment as a new point guard, even though Lillard just signed a Super Max extension that is set to kick in next season.

Even though LeBron did trim his beard with the help of his wife Savannah, LeBron’s beard has drawn comparisons to his former Cavs teammate Kendrick Perkins. While the jokes are funny, it is true that one of the side-effects of this stoppage in play was that it most likely made it impossible that we could see a Lillard-LeBron battle in the first round of the playoffs. Portland was 3.5 games behind the 8th-seeded Grizzlies with 16 games left to go, including two head-to-head games against each other.

This sequence from LeBron's first game as a Laker is amazing 😤 pic.twitter.com/PiNBVjLADE

Unless the NBA season resumes, and unless that resumption includes an expanded playoff field, we likely won’t get to see Lillard and LeBron play against each other for a while, which has become especially fun since LeBron jointed the West.

LeBron James and his friends didn’t show up on Wednesday night to let out their feelings. 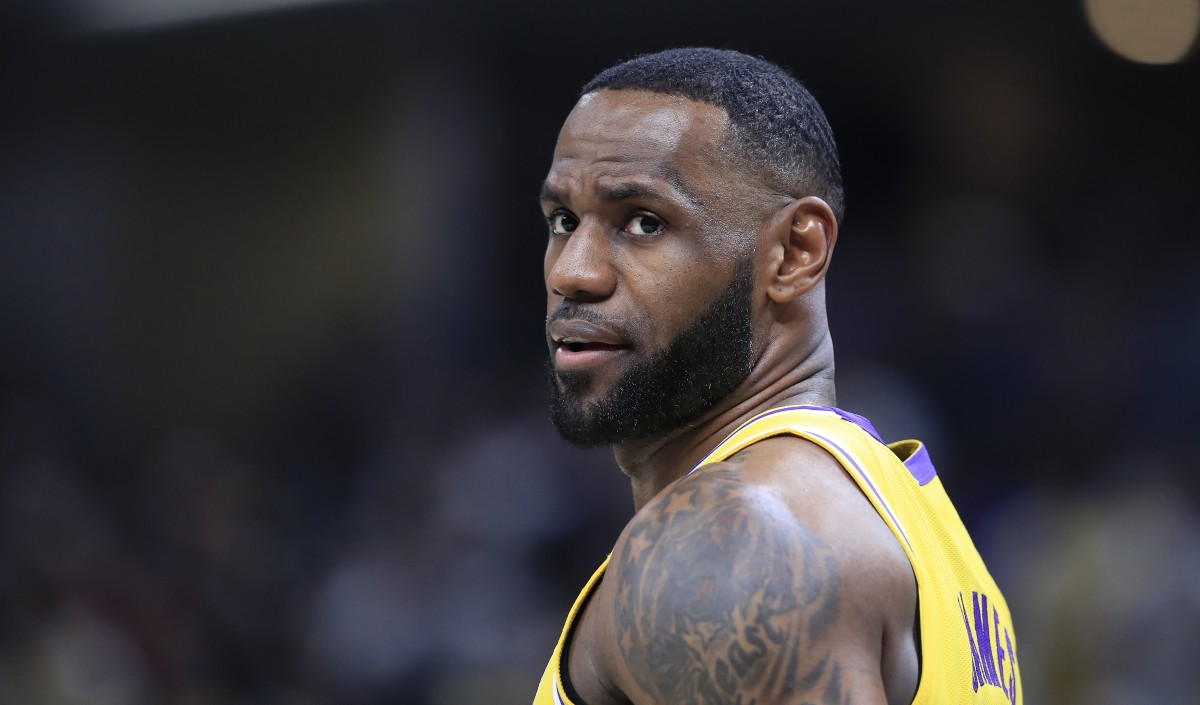 LeBron led the way for his team. But he and Davis combined for 47 total points while Kawhi Leonard had 35 on his own. While home feelings are difficult, Paul George had 17 points. While James and Davis had big games, Kyle Kuzma showed that he can bring high-quality play with 25 points.

The Lakers are a strong team but are now losers of four in a row. The best news for them is that they are playing a Blazers team that doesn’t know how to lead itself. The Lakers are one of the best teams in the West but will not be a team that teaches their opponents about how to play.

The Athletic’s Sam Amick reports the NBA investigated the Clippers after complaints from the Los Angeles Lakers regarding Kawhi’s uncle. 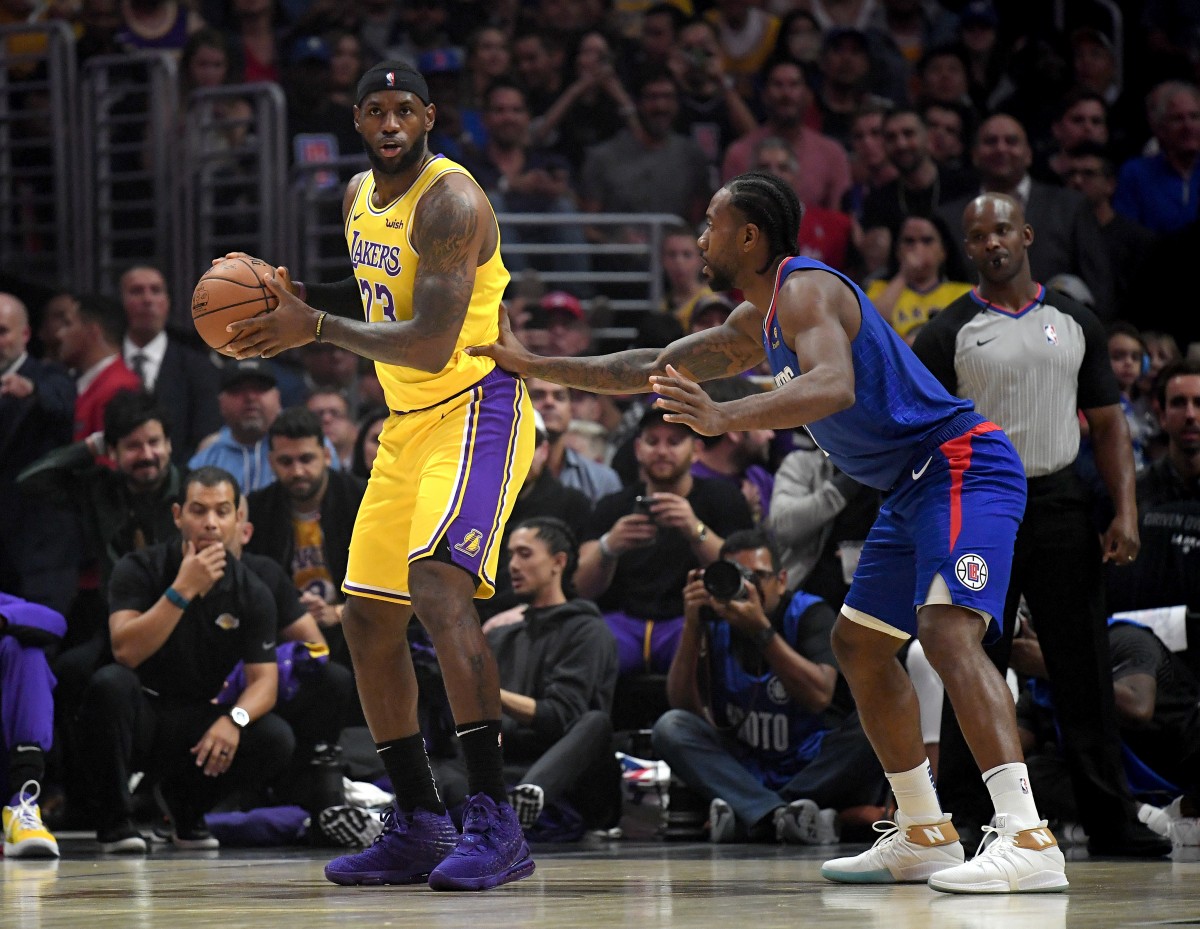 The Lakers were reportedly upset with how Leonard’s camp handled things, particularly Leonard’s uncle Dennis Robertson, known more commonly as “Uncle Dennis.” But until now, it’s unclear what the demands were that upset the Lakers so much other than Leonard just deciding he wouldn’t join LeBron James.

The Athletic’s Sam Amick dropped a bombshell on Monday, illustrating the demands Uncle Dennis made of the Lakers that definitely fall outside of the confines of the NBA’s collective bargaining agreement, which the Lakers refused to give Robertson.

The stories about Robertson’s wish list made their way to the league office soon after Leonard made his decision, with concerned parties reporting that Leonard’s uncle had asked pursuing teams for much, much more than a max contract (Kawhi ultimately signed a three-year, $103 million deal with the Clippers). Sources say the league was told that Robertson asked team officials for part ownership of the team, a private plane that would be available at all times, a house and  — last but certainly not least — a guaranteed amount of off-court endorsement money that they could expect if Leonard played for their team.

This is incredible stuff and from the looks of it, something that the NBA player’s union doesn’t want to make a habit of. Amick also reported that the NBA conducted an investigation on the Clippers, which didn’t turn up anything illicit, but that the league and union no longer want relatives of players handling negotiations unless they are certified agents.

Most understood the fallout of Leonard’s decision to join the Clippers from a basketball perspective. Even though he’s again had to miss several games to manage a knee injury that appears to be an issue that will follow him for the remainder of his career, many see the Clippers as the biggest obstacle in the way of the Lakers to the NBA Finals. But now we also understand the fallout Leonard’s free-agent negotiations have had on the league behind the scenes.

While people in the NBA and likely LeBron James himself knew what was going on, this all adds to the backdrop for these two teams to play for the second time this season. It will also be the first time the Lakers get a look at the Clippers with both Leonard and Paul George.