College football Week 8 roundup. 5 things that matter, winners, losers, overrated and underrated parts of the weekend and what it all means. 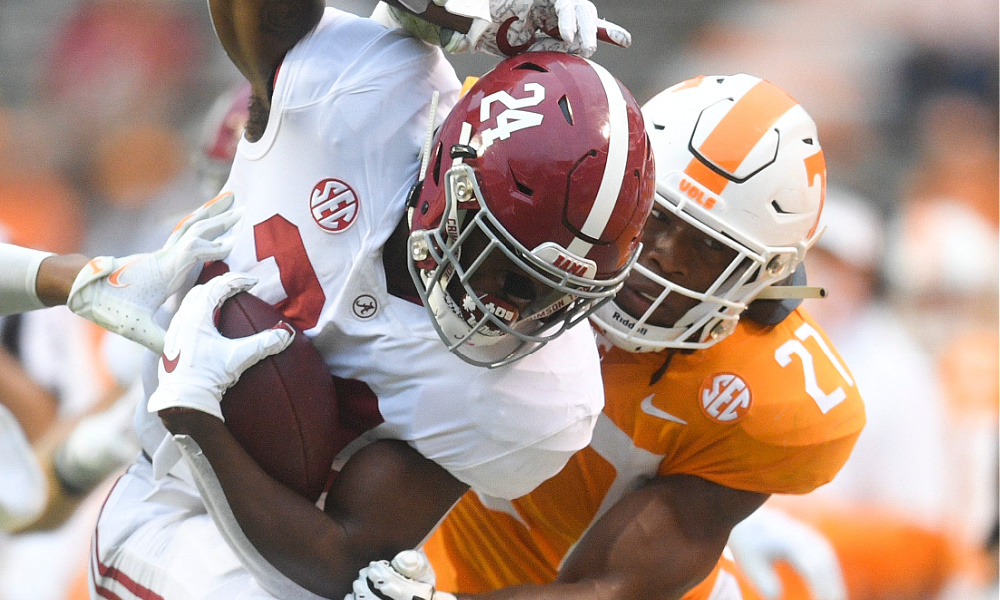 College football Week 8 roundup with the 5 things that matter, winners and losers, overrated and underrated parts of the weekend, and what it all means.

Well, welcome back, Greg Schiano. Rutgers hadn’t bothered to win a Big Ten football game since the middle of 2017 – the victory over Maryland was the last win over any Power Five program – going 3-24 since then. Schiano returned to the program he helped build up from 2001 to 2011 and beat Michigan State 38-27 with just 276 yards of total offense.

Mel Tucker took over a Michigan State program that needed a new energy and a few new ideas. His defense did the job against Rutgers, but seven turnovers later, this wasn’t exactly how he wanted to kick things off with road games at Michigan and Iowa up next.

Ohio State and Wisconsin played in last year’s Big Ten Championship, and they’re the odds-on favorites to meet again this season. Assuming all goes okay health-wise – more on that in a moment – the two likely starting quarterbacks combined to hit 40-of-42 passes for 524 yards and seven touchdowns and no interceptions in their respective wins. Ohio State’s Justin Fields went off on Nebraska – he ran for a score, too – and the night before, Wisconsin’s Graham Mertz was even better in the win over Illinois.

Northwestern 43, Maryland 3. The Terps took a 3-0 lead early, and allowed 43 unanswered points and 517 yards of total Wildcat offense. The Maryland attack generated a mere 207 yards, turned it over four times, and couldn’t get much of anything to work quite right. Alabama transfer Taulia Tagovailoa – Tua’s brother – threw for 94 yards and three picks.

The rough start to the season had absolutely nothing to do with QB Myles Brennan. He was hurt, though, and couldn’t go against South Carolina, so in stepped freshman TJ Finley. He hit 17-of-21 passes for 265 yards and ate touchdowns with a pick and a rushing score in the 52-24 win.

Pitt quarterbacks don’t play defense, but they didn’t help out the other side by failing to keep the offense moving. In the brutal 45-3 loss to Notre Dame, the Panther passing game – without injured starter Kenny Pickett – got a combined 12-of-33 day for 118 yards and three interceptions out of three quarterbacks.

And now it’s Cincinnati’s New Year’s Six bowl slot for the taking. Despite rising up into the top ten in the polls – they don’t matter, the College Football Playoff ones do when they come out in late November – it’s not really in the playoff chase. However, the 42-13 win at SMU put on a national show on both sides of the ball, highlighted by the 179-yard, three-touchdown rushing day from QB Desmond Ridder.

With the 55-14 loss to Kansas State, Kansas has now started the season 0-5, getting outscored 225-75. The 15-point loss to Coastal Carolina to kick things off was as close as the team has been able to get. Going back to last year, under Les Miles, KU has lost nine in a row and 14 of the last 15, with 12 of those losses by double digit blowouts.

All the UCF sophomore has done so far is lead the nation with over 430 yards per game with 19 touchdown passes and two interceptions. He followed up his 601-yard, five-touchdown day against Memphis with 422 yard and five more scores in the win over Tulane. Next up? Houston.

0-26. That’s what FCS teams were against FBS teams this season, and then Jacksonville State came into Riccardo Silva Stadium, got up 16-3 on the Golden Panthers, and held on for a 19-10 win and the first bit of fun to be had by any FCS team so far this year. The 0-3 Panthers managed just 156 yards of total offense with six first downs.