Here are eight players that Philadelphia could consider as potential replacements for an injured C.J. Gardner-Johnson in the Eagles’ secondary 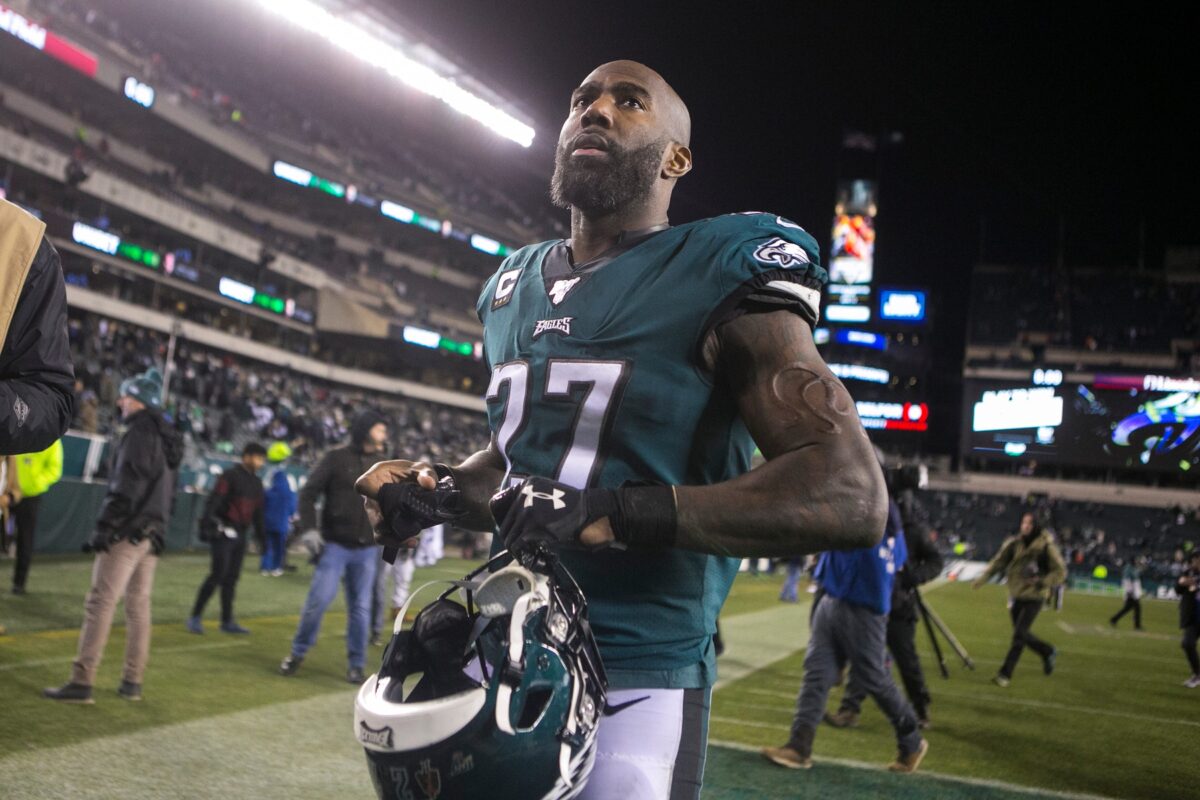 The Eagles could be without safety Chauncey Gardner-Johnson for a few weeks after a test revealed that he suffered a lacerated kidney in the Sunday night win over the Packers.

Former Eagles star tight end Zach Ertz suffered a similar injury late in the 2019 season during a win over the Cowboys and was expected to miss the playoffs.

The NFL’s interception leader with six, Gardner-Johnson has been a stabilizing force at safety.

Philadelphia Eagles coach Nick Sirianni had high praise for his quarterback, telling the media that Jalen Hurts had his best practice ever in the first joint session with the Miami Dolphins 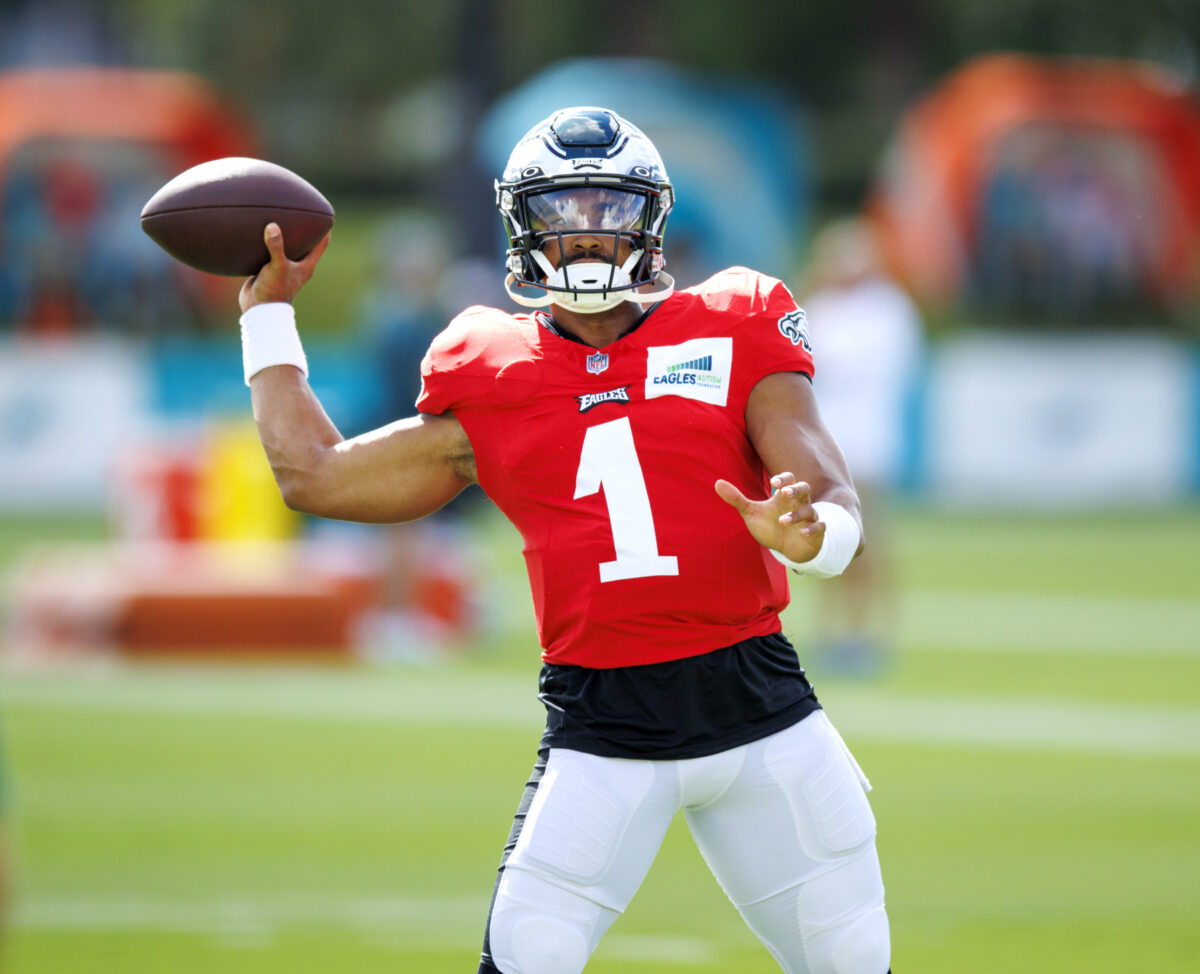 Nick Sirianni said that Jalen Hurts had his best practice on Wednesday since he’s been #Eagles HC.

He didn’t say the same about the rest of the offense and dismissed a near INT by Hurts, saying he thought Melvin Ingram wouldn’t have caught it.

We’re only talking about practice, but Jalen Hurts has improved immensely, and his head coach believes Wednesday was his most efficient day as a professional.

While addressing the media on Thursday morning, Sirianni praised his quarterback, stating that Hurts “had his best practice” since becoming the Eagles’ head coach.

“What he was doing with the football and being able to go through reads and progressions that fast and getting the ball where it needed to go was unbelievable.”

Philadelphia added A.J. Brown on draft night, and the Eagles have the most talented group of weapons on the roster in years, setting Hurts up for success as a potential contract extension looms.

Philadelphia Eagles Placed guard/tackle Brett Toth, on the Reserve/Physically Unable to Perform list ahead of joint practices with the Miami Dolphins 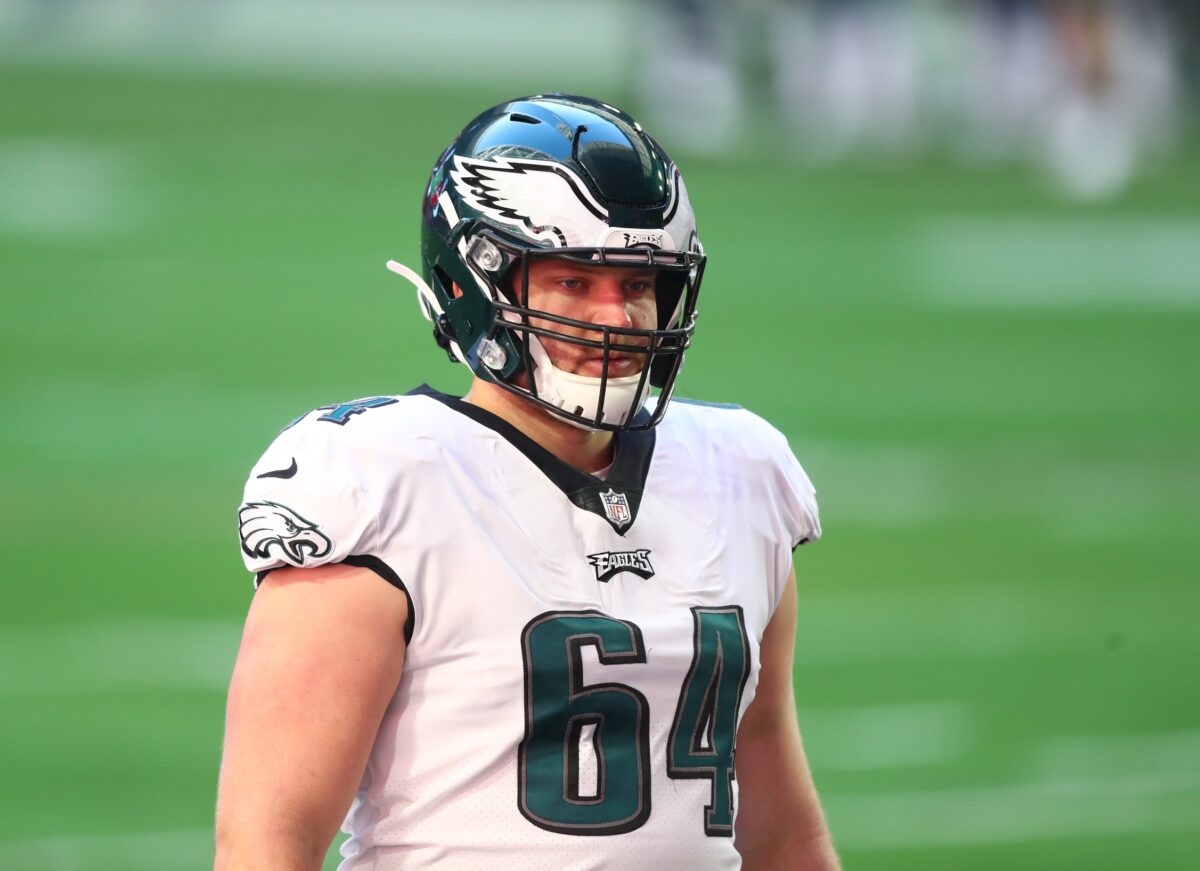 The move means Toth will miss at least the first four games of the regular season.

Toth has appeared in nine regular-season games for the Eagles over the last two years, and he also suffered an ACL tear in that loss to Dallas.

These NFL players have been standouts during training camp. 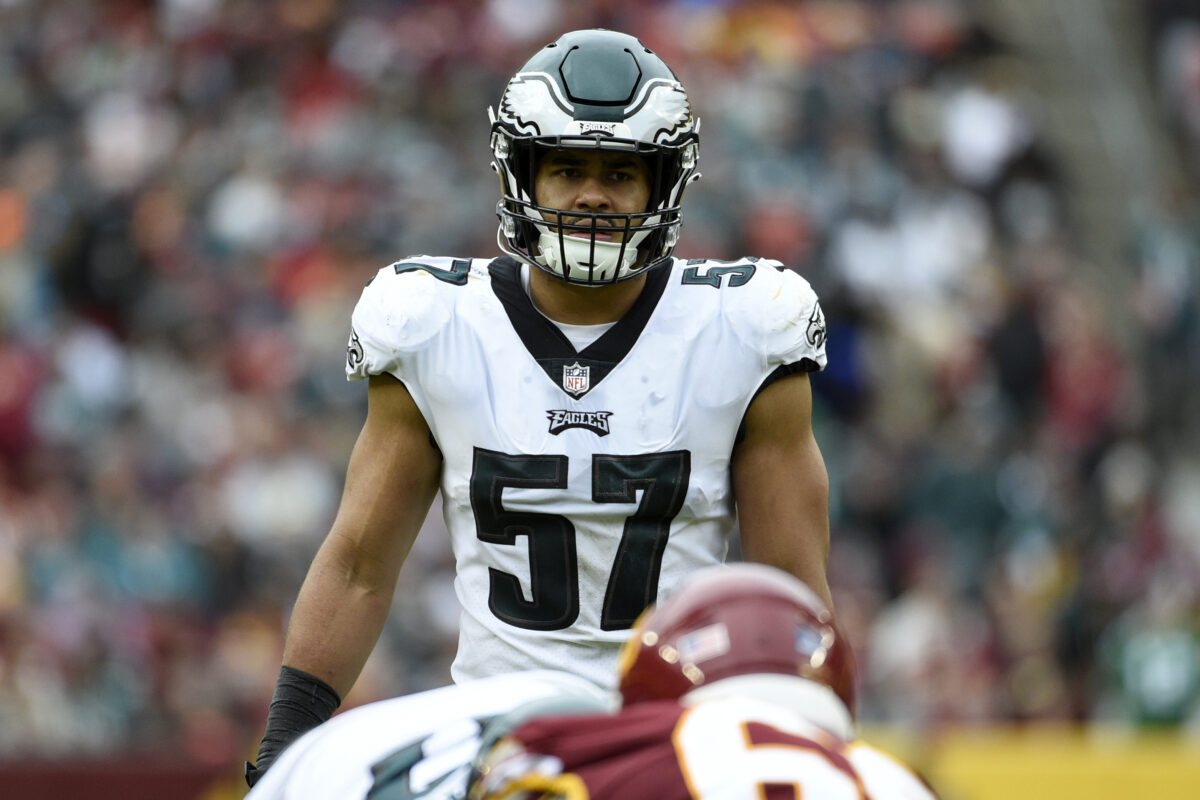 The unofficial start to the NFL season kicked off with training camp last month, where all 32 teams returned to action in preparation for the 2022 season.

Whether it’s rookies making an immediate impact or veterans dominating, training camp has brought out some standout performances around the league. While it’s important to temper expectations at this point of the year, it’s hard to ignore some players’ impact this summer.

Our NFL Wire editors identified the most impressive player from each of the 32 NFL teams during training camp.

Five takeaways from the first half of the Philadelphia Eagles preseason opener vs. New York Jets 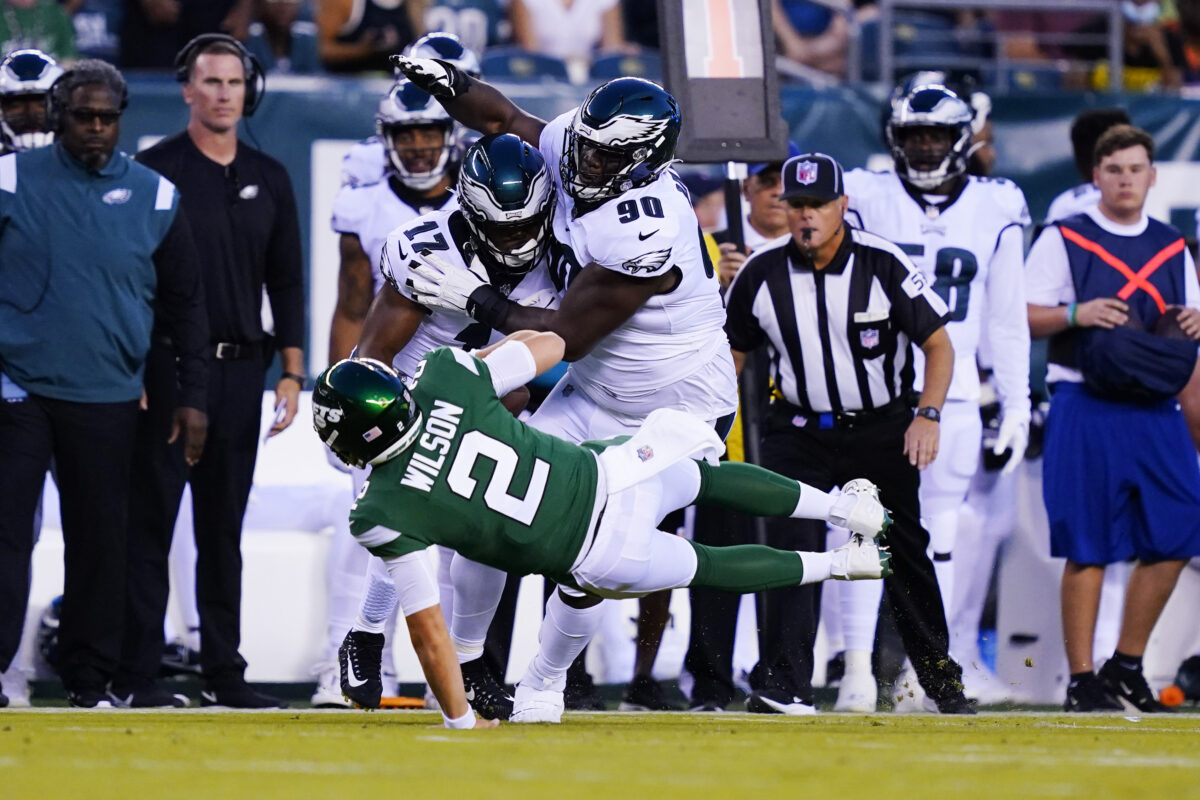 The Eagles wanted a quick start, and things couldn’t have gone any better after Jalen Hurts started perfect and Kyzir White made a game-changing play at the linebacker position.

Hurts was 6-6 for 80-yards, and one 22-yard touchdown to Dallas Goedert during his single drive at quarterback as the Philadelphia offense looked balanced with the third-year signal-caller spreading the football around.

On defense, the Eagles were solid early on.

They helped push the score to 14-0 after White snagged an interception off Zach Wilson after a beautiful drop into coverage, confusing the second-year quarterback.

Wilson would eventually leave with what some described as an ACL injury.

With Philadelphia up 14-3, here are five takeaways from the first half. 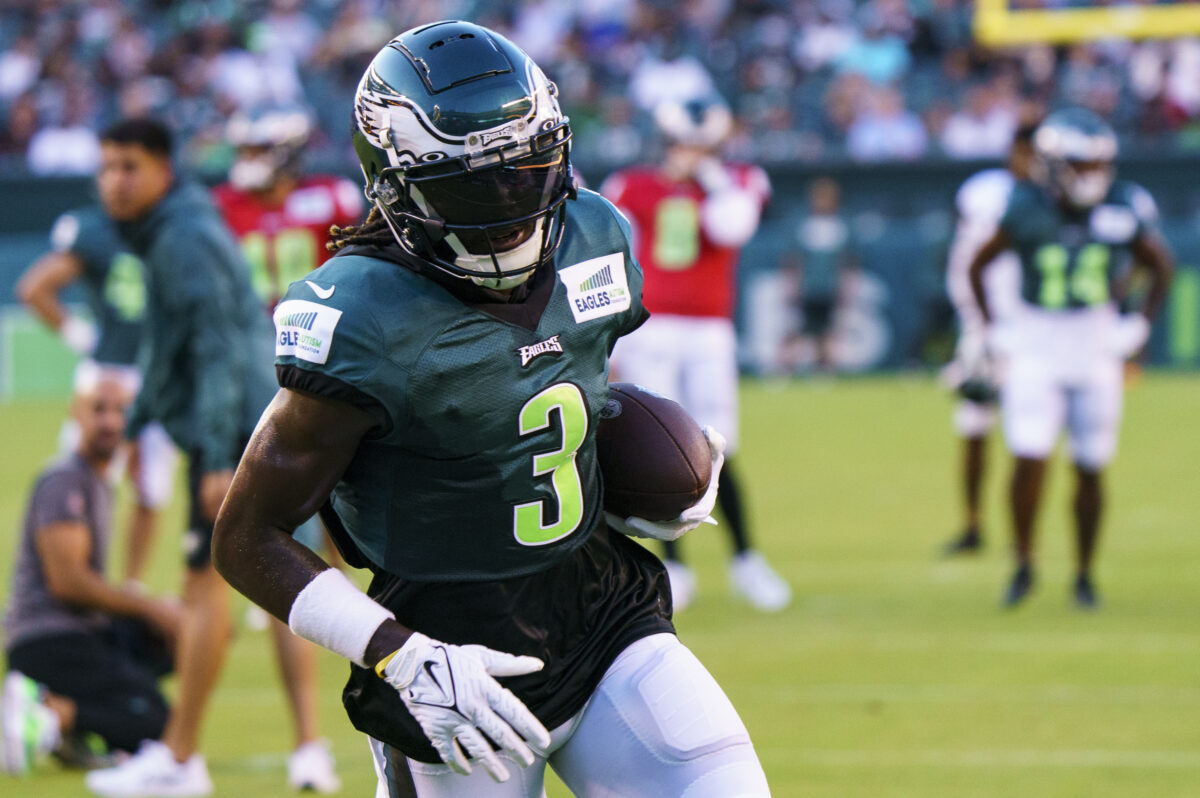 Philadelphia has logged ten training camp practices as a team, and the reward is here with the preseason opener against the New York Jets.

Long-time GM Howie Roseman gets his first opportunity to evaluate his revamped roster under the lights.

At the same time, Nick Sirianni will begin year two as the head coach of a team with growing expectations, and the experts will watch for an improved offense that can maintain a downfield passing game.

Here are five things to watch with the kickoff in over an hour.

Philadelphia Eagles vs. New York Jets: 7 rookies to watch in the preseason opener

The Eagles’ vaunted rookie class will get their first opportunity to shine on an NFL field when the team hosts the Jets in a preseason matchup on Friday night at Lincoln Financial Field.

Philadelphia’s starter will play a series or two, allowing the reserves and players on the roster bubble to see extended action against an improving AFC East roster with a talented second-year quarterback in Zach Wilson.

Notable rookies like Carson Strong, Kennedy Brooks, Mario Goodrich, and Josh Jobe will move up the depth chart. At the same time, two former Georgia Bulldogs will look to transfer their SEC dominance into a versatile scheme under Jonathan Gannon. 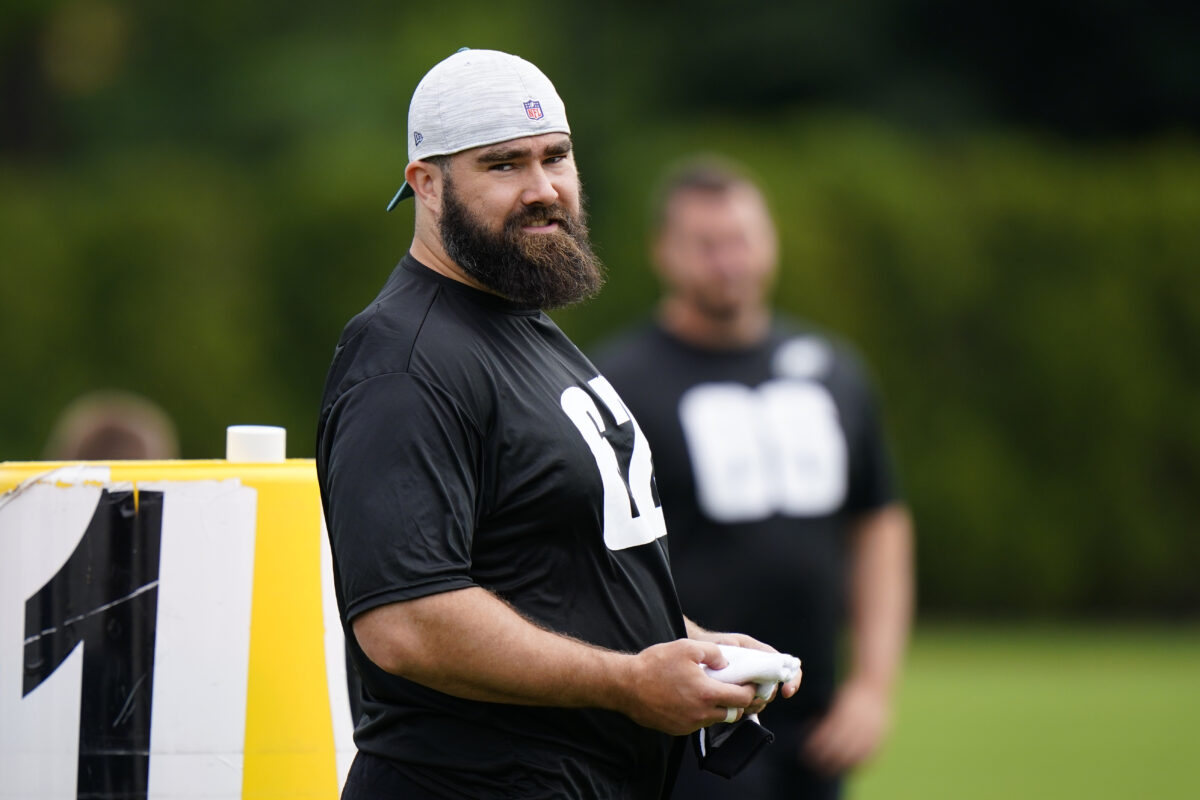 The Eagles will be without All-Pro center Jason Kelce indefinitely after he chose to undergo a minor procedure for his injured elbow.

Kelce underwent a routine “clean out” procedure on Tuesday morning and choosing to have the procedure should have him back in time for the season opener against the Detroit Lions on Sept. 11.

Official word on C Jason Kelce from #Eagles: “After trying to work through discomfort in his elbow, it was agreed that a routine cleanout was in his best interest and would also allow for a speedy recovery.”#FlyEaglesFly

The typical timetable after arthroscopic surgeries is roughly two to four weeks, allowing the veteran the bulk of the preseason to get healthy.

With Kelce out indefinitely, here are five takeaways from the news. 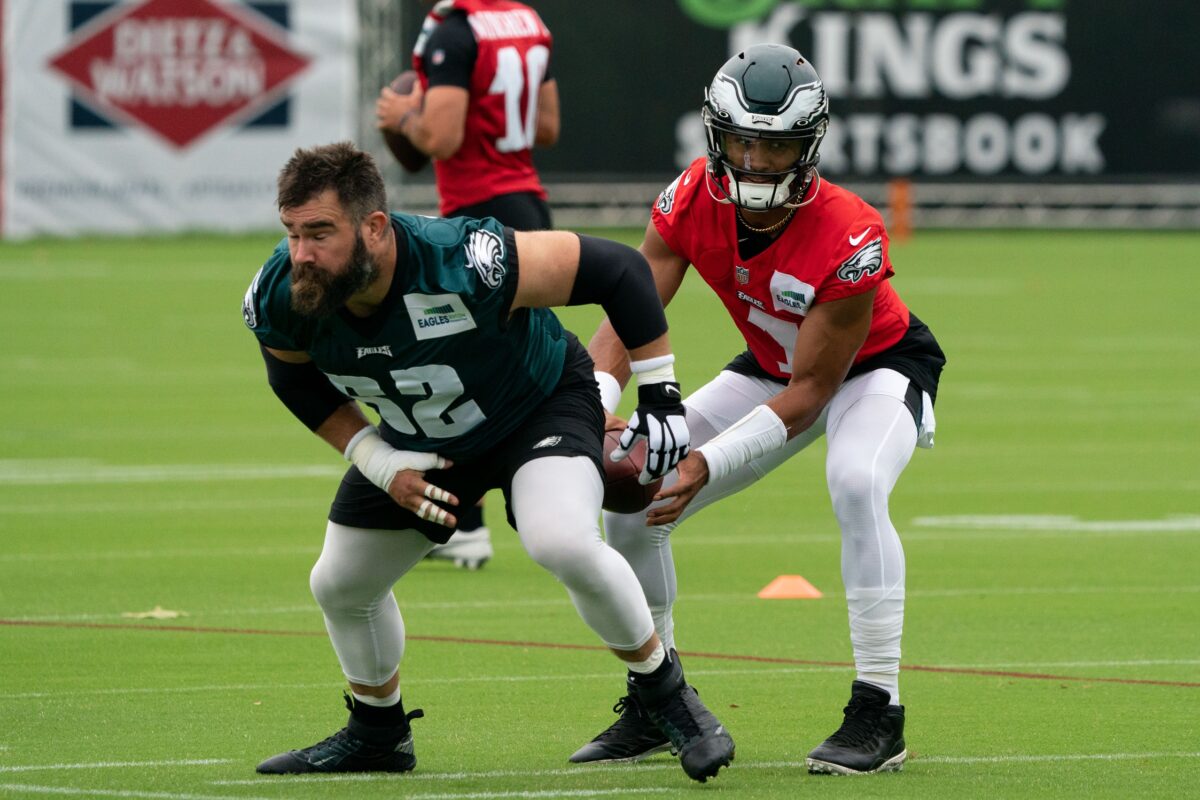 #Eagles update on C Jason Kelce, who is having surgery:

"After trying to work through discomfort in his elbow, it was agreed that a routine 'cleanout' was in his best interest and would also allow for a speedy recovery."

The Eagles are less than a month away from their regular season opener against the Detroit Lions, but they’ll be without one of their leaders for the next few weeks.

Jeff McLane of The Inquirer reports that Jason Kelce has elected to have elbow surgery to clean out the inflamed area.

Kelce missed the Eagles’ Tuesday morning practice due to elbow soreness, and it was at that time that all parties agreed to have the scope done.

Philadelphia’s oldest player on the roster, Kelce, hasn’t missed a game since Chip Kelly’s second season and the last game the future Hall of Famer missed was Oct. 26, 2014, when the Eagles lost 24-20 to the Cardinals in Glendale, Ariz. 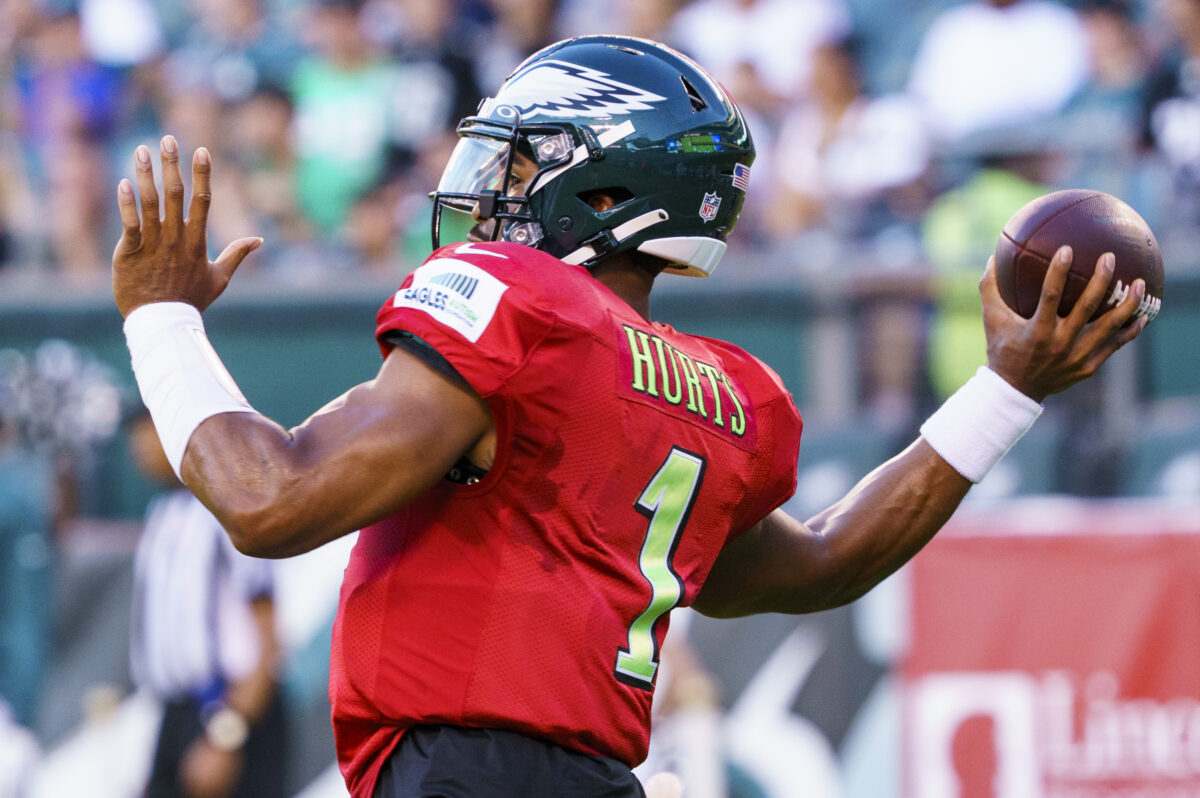 Philadelphia went light from a team perspective, and with both left tackles out with concussions, the Birds limited the action for quarterback Jalen Hurts. The offense had an up and down night against a talented defense.

The Eagles will have Monday off before a Tuesday morning walkthrough, and with the preseason opener against the Jets scheduled for Friday, here are several takeaways from practice No. 8.