The Cowboys pulled out their third straight win, what better way for fans to celebrate than to enjoy the pics from the game.

There’s nothing like proving the doubters wrong and the Dallas Cowboys have done just that. After a really bad first showing of the regular season that came on the heels of holding everyone out for the preseason, the team has now won three straight games. That they’ve done it without their franchise quarterback seems to be a testament to just how much talent their is on the roster.

Dallas was able to dominate their division rival Washington Commanders on Sunday afternoon, 25-10. The defense was once again stellar forcing two interceptions, notching two sacks with another two intentional grounding calls. The pressure was there, the backend coverage (for the most part) was there and the passing offense got a couple players back. All in all, it was a fine performance and worthy of commemoration. So get those right-click-save-as fingers ready and enjoy the best pics from the game on Sunday.

It was a dark night Monday and while cape crusader imposters gather in Philly, Dallas provided true heroism. Enjoy the graphic novel. | From @KDDrummondNFL 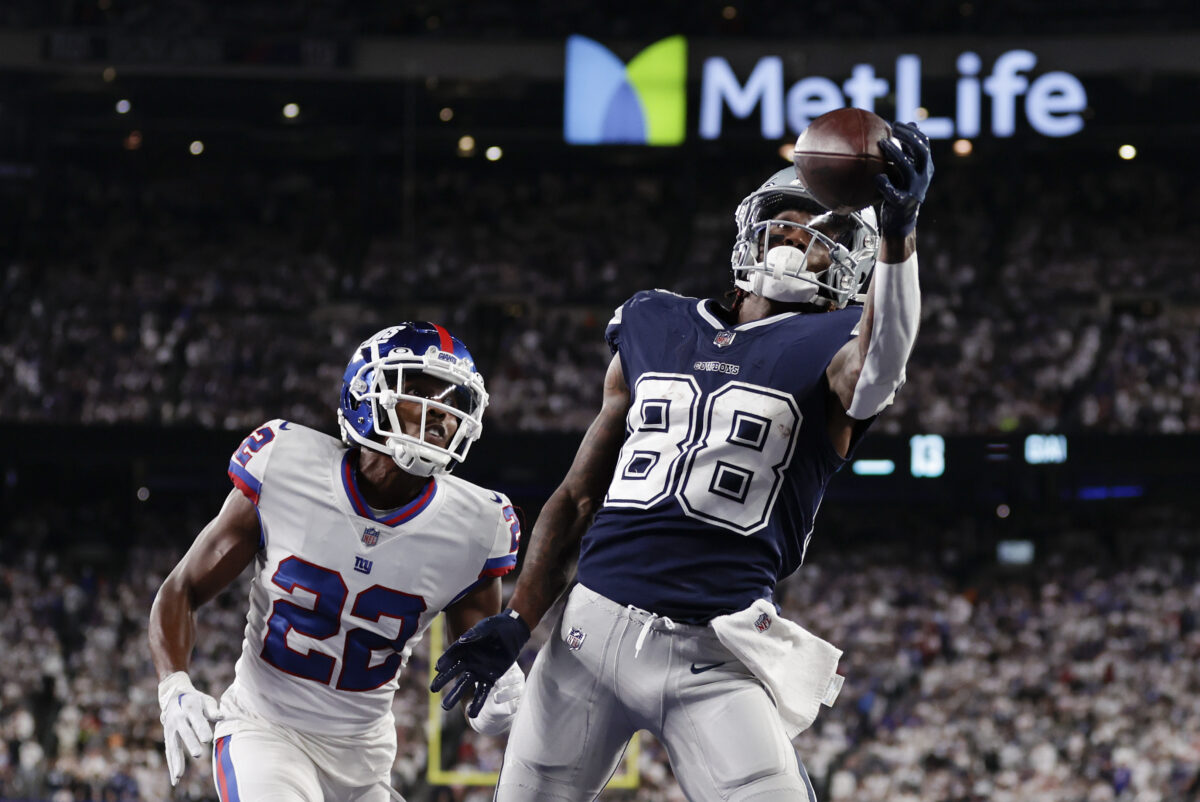 It was a dark night, and while the cape crusader faux variants seem to have spawned in Philadelphia for the time being, the Dallas Cowboys had no problem being the imported heroes that protect New York from the evils they have grown accustomed to. The Cowboys jumped on a plane, landed, then went to work keeping the general public from having to endure a 3-0 start by the Giants and all that would have come with the facade in the national media.

Instead, the Cowboys scored 17 straight points to answer a seven-point deficit and then came up with a late-game interception to seal the 23-16 victory. In true graphic novel form, nothing tells the story better than epic depictions. Here’s a look at over 90 great pics taken from the talented photogs at the game.

Get those right-click save-as fingers ready as there’s ton of great captures from the exciting home win led by the defense and backup QB Cooper Rush. | From @KDDrummondNFL 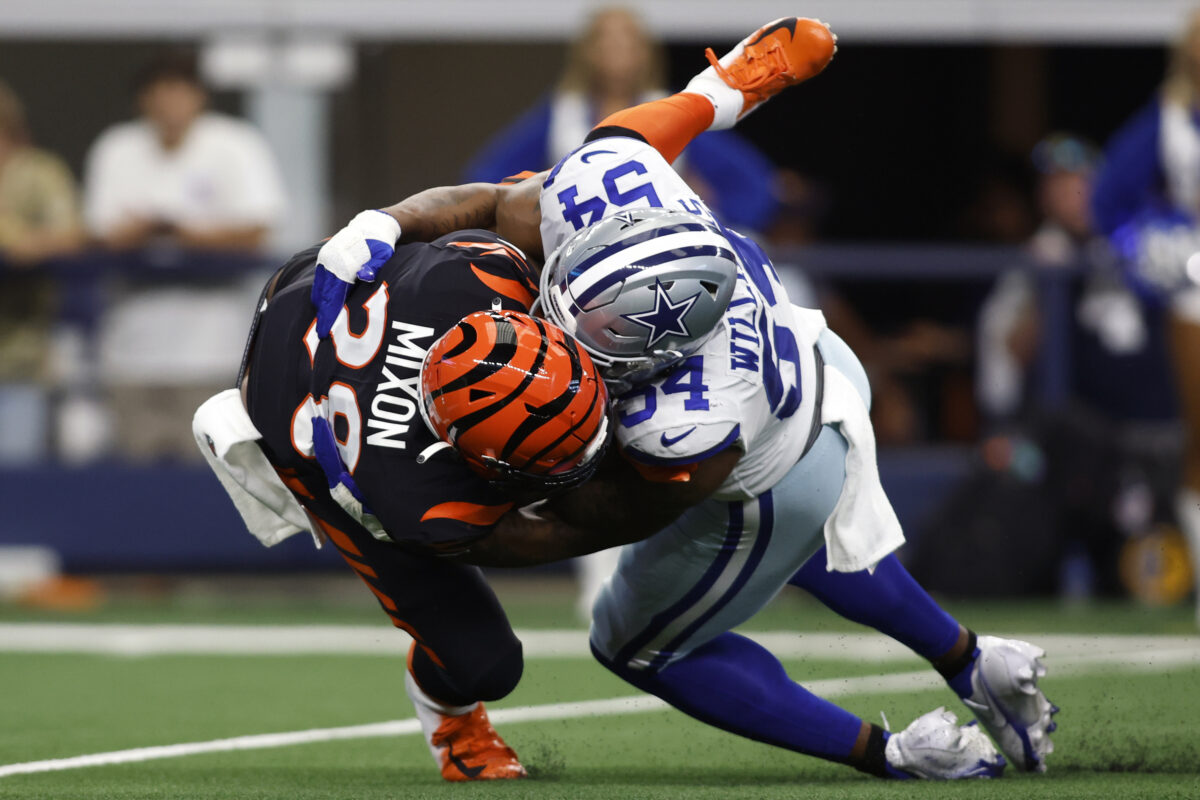 The Dallas Cowboys were on the precipice of a lost season. Already sitting at 0-1 and staring the dreaded 0-2 start in the face, they had to bear down and try to win a game without their franchise quarterback. For the second time in two seasons, backup Cooper Rush came in to start the game and left it victorious, once again in the final minute.

The Cowboys 20-17 win over the Cincinnati Bengals was mostly on the strength of their defense, as Micah Parsons once again led the way. The second-year LB had two sacks, as did DE Dorance Armstrong, among six takedowns of Joe Burrow. The corners kept the WRs contained, the line kept Joe Mixon contained and set the stage for the offense and special teams to win the game. Thanks to the wonderful photographers from the Associated Press, USA Today Images and Getty Images, enjoy over 100 great snaps from the contest.

3 of the Bucs’ top 4 receivers appear on the first practice report, find out more about who wasn’t a part of Wednesday’s work. | From @KDDrummondNFL 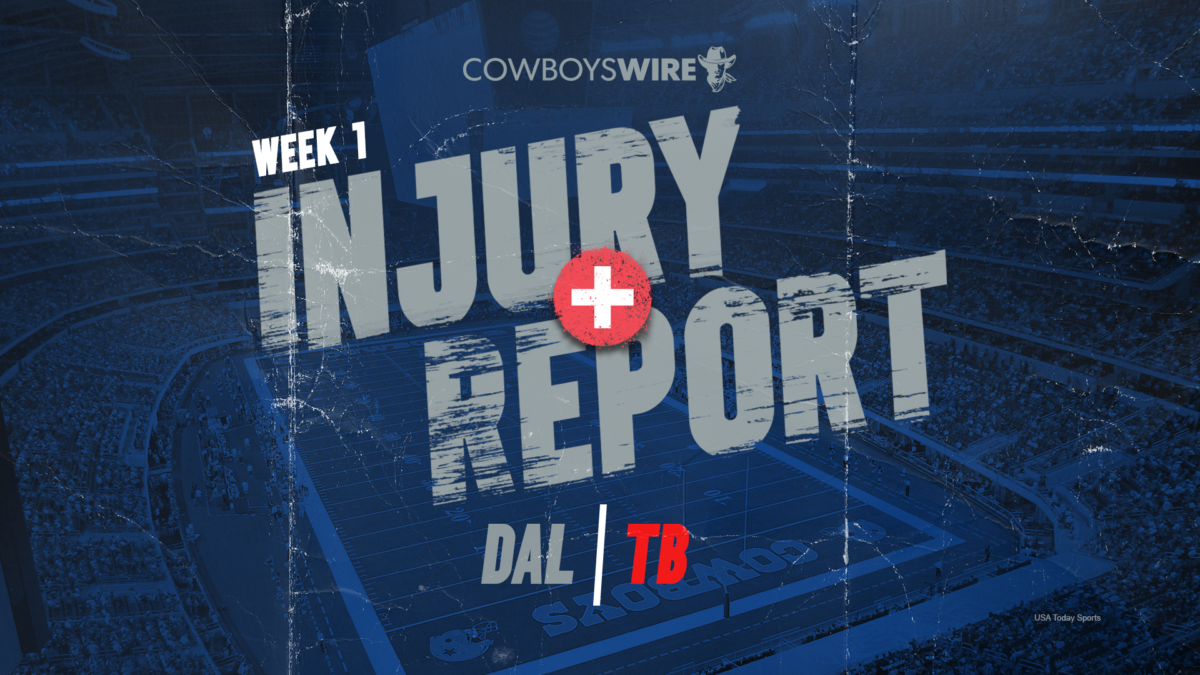 The Dallas Cowboys and Tampa Bay Buccaneers are barreling towards their Week 1 clash to kick off the NFL season. The Sunday night matchup will pit the two teams together to open each other’s schedules for the second year in a row. The two teams are both defending division champions who are thirsty for more in 2022.

As is always the case across an NFL season, health is a key factor in top teams being able to achieve their goals. As such, the practice reports that precede the actual battle provide key intel into how well manned each combatant could be come game time. Here’s a look at the participation levels in the club’s first report of 2022. 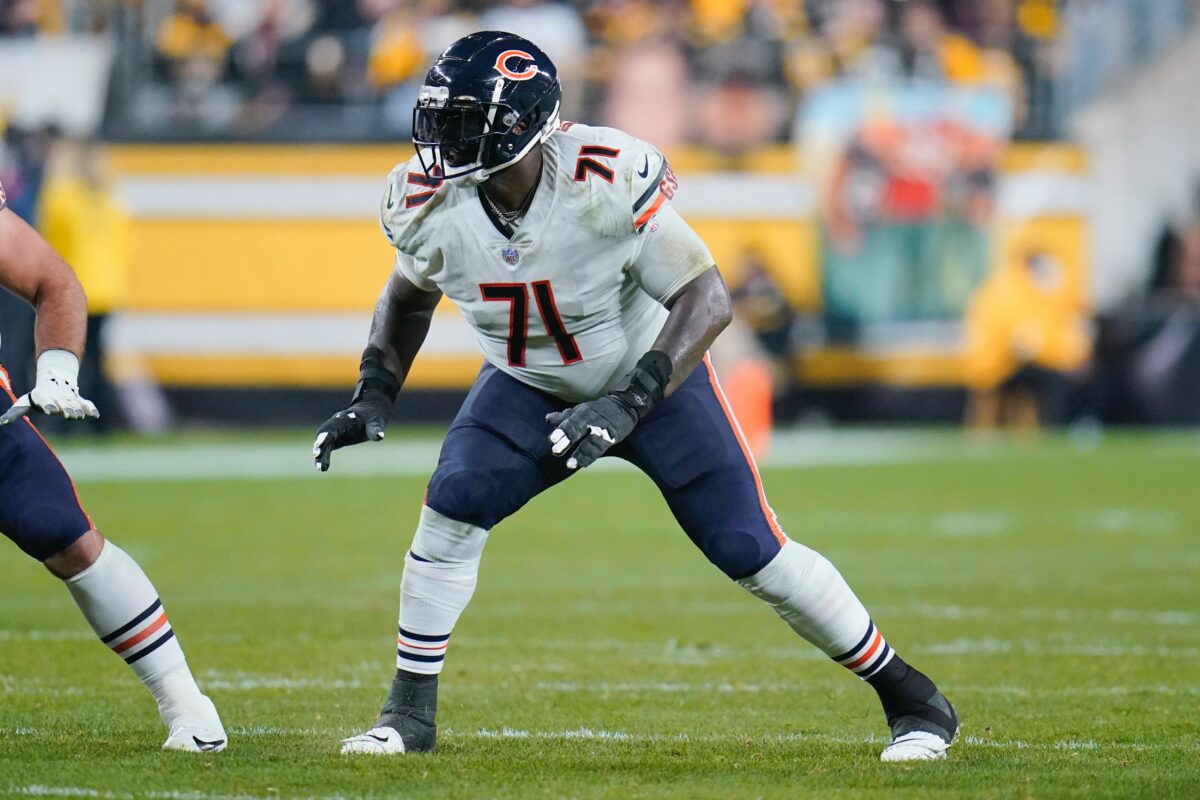 The Dallas Cowboys are having their first Week 1 practice on Monday. Following last week’s roster cutdown, the overcrowding in the jersey number department is finally getting some room to breathe. Several players had to share jersey numbers, as although Dallas doesn’t retire any, there are more than a handful which are reserved until former notice.

Now that there are only 70 players remaining (53 + 17-man practice squad), things are a little more spread out and players have been issued new numerals. Here’s a look at who has a new jersey number change from 2021, as well as any shifts in the last 24 hours.

A rundown of the remaining contenders for the 53-man roster, organized by jersey number, ahead of the final exhibition of 2022. | From @KDDrummondNFL 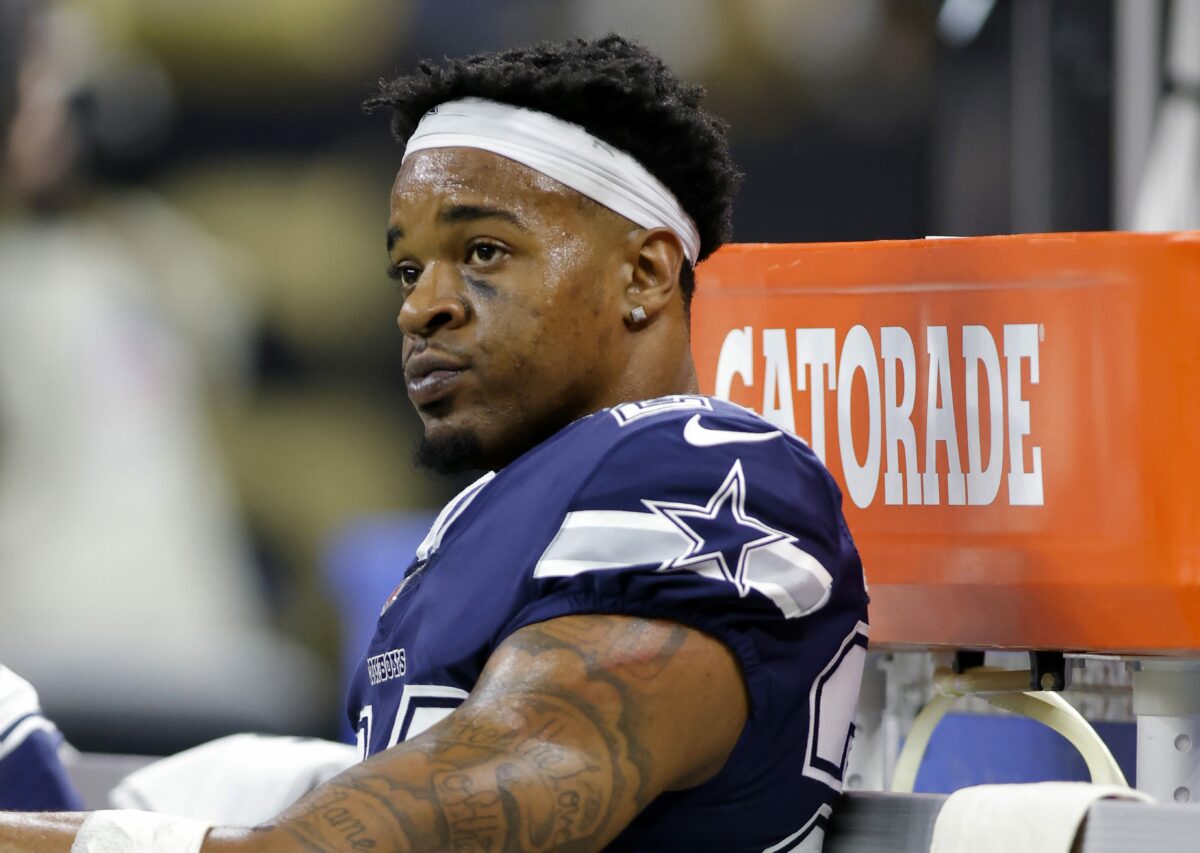 The Cowboys have taken a different approach to their preseason schedule than many other teams. Stars and most starters with extended experience have been nowhere to be seen. Instead, they’ve gotten extensive work through three days of joint practices, one with the Denver Broncos and two with the Los Angeles Chargers, ahead of meeting those teams in the exhibitions.

Since their return to Dallas, the Cowboys had two open-to-the-public practices at night, and will once again hold their starters out in the exhibition finale against the Seattle Seahawks. That’s worked to the advantage of both the staff and the down-roster hopefuls, giving extensive game action to several layers of the depth chart. Dallas has plenty of decisions to make to whittle their roster down to 53 players. Here’s a look at all 81 of the candidates.

A collection of photo snaps from both the joint practice and the preseason tilt against the Denver Broncos. | From @KDDrummondNFL 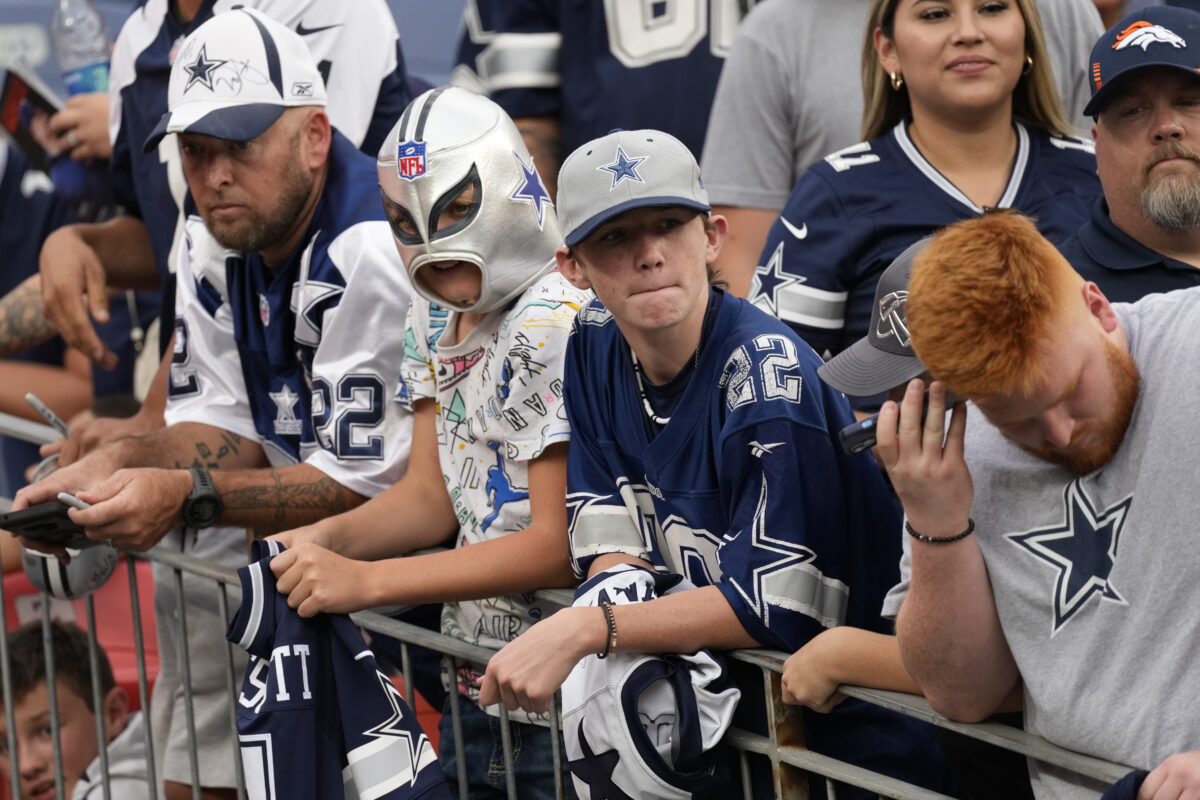 When it comes to the Dallas Cowboys trip to Denver to take on the Broncos in a joint practice and then the preseason opener on Saturday night, things did not go well. Reacting to it as an indicator of things to come in the regular season is a fool’s errand. Dallas’ regular season performance hasn’t matched the preseason one in almost a decade. The starters took part in the joint practice, and then were held out en masse from Saturday’s game. But just because there’s no correlation to the games that count doesn’t mean one can’t enjoy the frozen moments in time.

Here’s a look at some of the best captures from Dallas’ weekend trip to Denver. They’ll return to Oxnard, California to pack up their things before heading to take on the Chargers ahead of their return to Texas now, but fans can scroll through the work of the Associated Press and USA Today Images in the meantime.

A look back at Dallas’ 2022 training camp, through pictures. | From @KDDrummondNFL 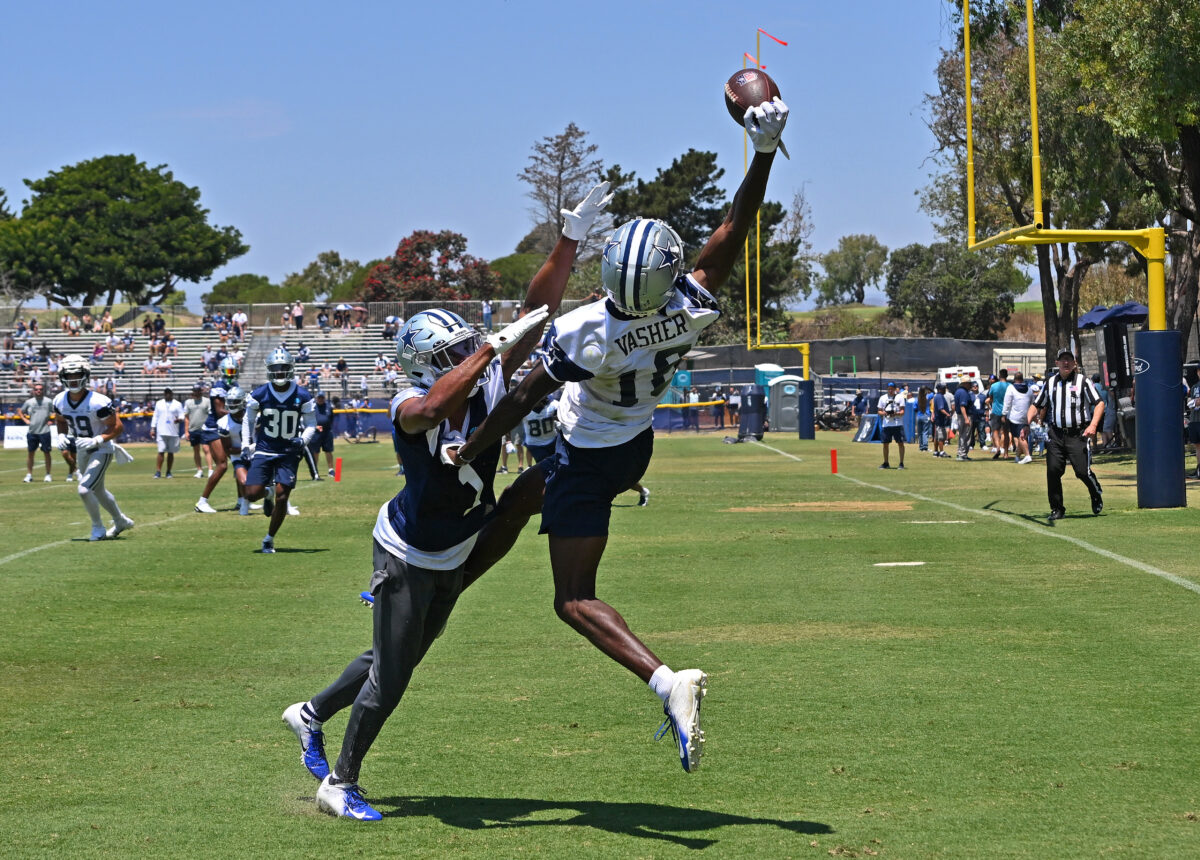 Day 3 of training camp brought a terrific one-handed grab from a young WR trying to make the club, plus other great stills. 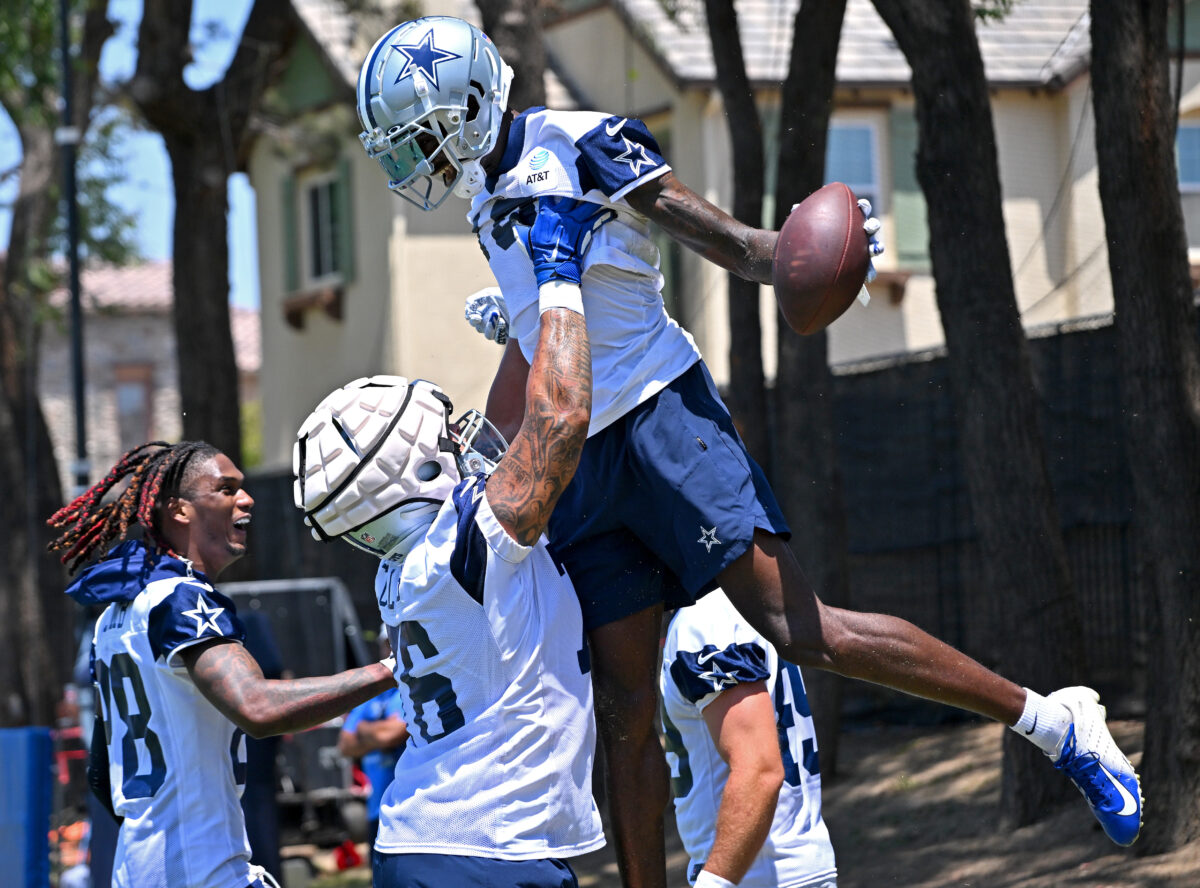 The Dallas Cowboys have hit their first weekend of 2022 training camp. Day 3 of practices was Friday, the final work before the official opening ceremonies that happen four days into camp. Don’t ask, it makes sense to someone. On Saturday the club hosted the Mayor of Oxnard while fans lined up for a half mile (give or take) to get into the facilities.

But before that happened, another day of padless practice occurred. Fans know by now that just because the shells aren’t on doesn’t mean the action isn’t intense. A battle between T.J. Vasher and CB Kelvin Joseph in red-zone work provided the highlight of the day. There were other great captures, though, so take a look at some of the best pics of the day.

Take a look at the photo galleries from Day 1 and Day 2.

Take a look at pics from all of the practice action, as well as from Turpin’s time with the Generals and as a TCU Horned Frog. | From @KDDrummondNFL 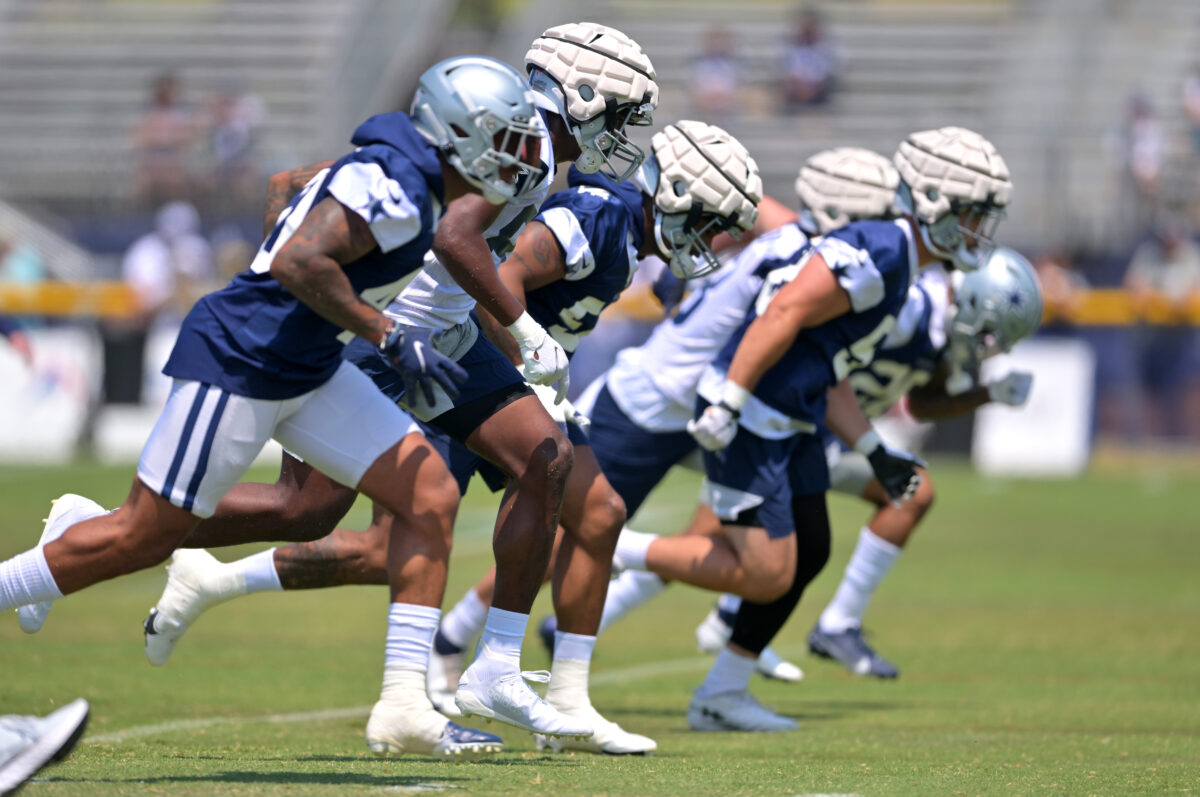 The Cowboys completed their second day of training camp practices on Thursday, still working in helmets but without pads. The simple return of football-like activities will soon turn to full on practice, but for now hitting is outlawed. Thursday’s work did welcome in a new participant however, as WR Kavontae Turpin, the 2022 USFL MVP, donned a star for the first time.

Take a look at pics from all of the practice action, as well as from Turpin’s time with the Generals and as a TCU Horned Frog. For a look at Day 1’s gallery, go here.