Laviska Shenault will come into Week 5’s game against the Texans with a lot of momentum, as a result, he’ll be a key player to watch Sunday. 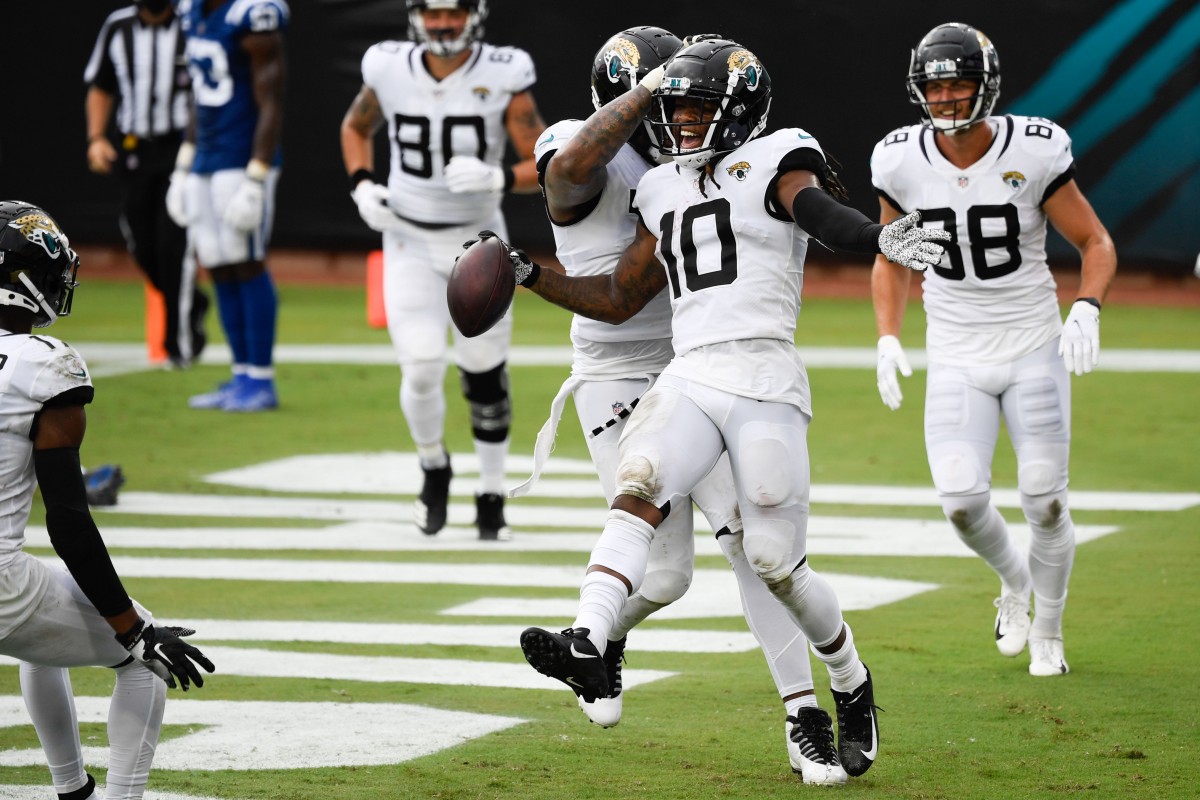 The Jacksonville Jaguars will be looking for their second win of the season against the Houston Texans on Sunday, and despite them being winless, it’s expected to be a dog fight. Simply put, that’s the way divisional games simply are and the Texans’ talent level seems to be a little more even with the Jags’ than in years past.

For the Jags’ staff, this game feels like a crucial must-win situation. If they can somehow stop the bleeding from a three-game losing streak, they would be a game away from .500 with another winnable game coming up Week 6 against the Detroit Lions.

As always, the Jags will at least need a handful of players to step up and lead the team against Houston. Here are five who we think will be worth watching if the team is to acquire it’s second victory of the season:

With the Texans’ rush defense being last in the NFL and allowing an average of over 180 yards a game, James Robinson should be in for a great day. The undrafted rookie sensation stunned the league during the first quarter of the season, exiting the process with 60 carries for 285 rushing yards and three touchdowns as a rusher. He also flashed as a receiver, registering 14 receptions for 161 yards.

Not only could Robinson be a key to putting points on the boards for the Jags, but he also should be the biggest all-around key for the team. With his skills on the ground, the team could dominate the time of possession and keep their wounded and struggling defense off the field.

The leader of the Jags offensive line will be returning to the lineup after missing Weeks 3-4 with a knee injury he sustained in the second quarter of the Jags’ game against the Tennessee Titans. That’s no only huge for the aforementioned Robinson, but the offense in general.

Linder has faced this Texans front more than any lineman on the team as a draft pick from the 2014 class. They only catch about facing them this time is that he doesn’t have to face the tough D.J. Reader, who joined the Cincinnati Bengals in free-agency. As Houston’s rush defense reflects, that’s a huge loss, which means Linder could have a dominant day upon his return.

Again, the key to beating the Texans is through running the ball. However, that’s not to say the Jags won’t need contributions through the air. Luckily, for Laviska Shenault Jr. he does both and I believe he’ll be a key contributor as a result.

Shenault has not only been one of the Jags’ key contributors, but he’s been one of the best rookies in the game. He’ll come into Week 5 after a career high of five receptions for 86 yards. It wouldn’t be wrong to expect a similar day or better in addition with some effective carries as the Texans are also allowing a 71% completion rate.

The Jags first-round pick from April is set to get his first start with Josh Allen being ruled out. He’s going to need to have a good day, too, if the Jags are to win as Deshaun Watson can hurt the Jags with his legs or his arm.

It’s been a struggle for K’Lavon Chaisson this season and the rookie will enter Week 5’s game with a Pro Football Focus grade of 52.9, seven total tackles, and a sack. However, in the Jags’ divisional games, he’s made impact plays and that could be the case against Houston.

Against Indy (Week 1) he had a pick, but it was taken back due to a holding penalty. The next week, against the Tennessee Titans, he acquired his first sack, so there clearly is big play ability in Chaisson’s arsenal.

Even aside from Allen, the Jags had a lot of names from their defense on this week’s injury report. They could be without two more starters in linebacker Myles Jack (ankle) and cornerback CJ Henderson (shoulder), too,  as both were ruled questionable on Friday. Simply put, without either or both players, the Jags’ defense is going to have an uphill battle on their hands if the team wants a victory.

However, one positive is that the team will gain a starter back in Jarrod Wilson, who was placed on IR after Week 1’s victory over Indy with a hamstring injury. While he’s a player who fans don’t refer to as an “impact player” he was clearly missed with Andrew Wingard replacing him in the lineup. As many found out, Wingard is more of a special teams player and teams picked on him on occasions.

That said, maybe Wilson could give them better coverage and positioning on the opponents as he’s much more experienced than Wingard.