Marcus Davenport and Mark Ingram II are among 4 pending free agents the New Orleans Saints should let walk away in 2023: 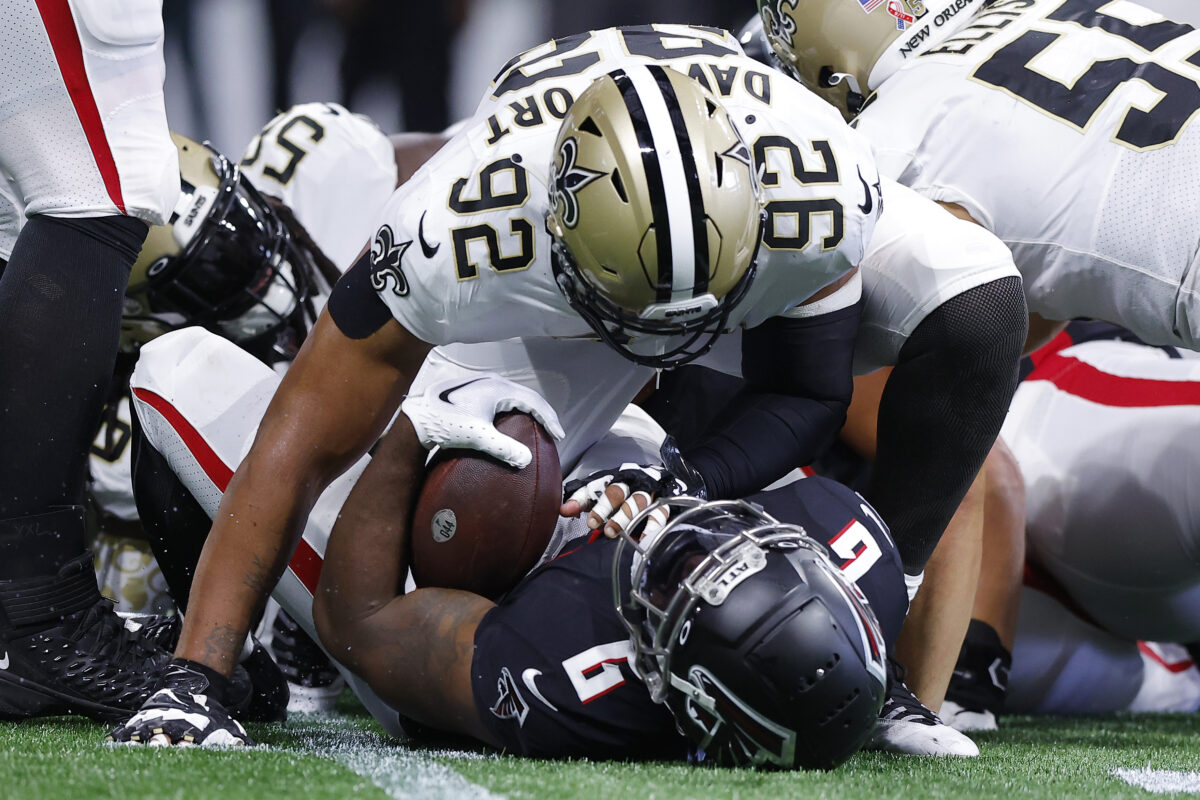 It’s shaping up for another busy New Orleans Saints offseason, and they’ll have plenty of difficult decisions on their 28 pending free agents. Some players are easy choices to re-sign with the team, but there are some others on the list who probably shouldn’t return for 2023. Here are four pending free agents the Saints should let walk away in the spring:

LB Kaden Elliss and TE Juwan Johnson are some of the pending free agents the New Orleans Saints must re-sign once the 2022 season is over: 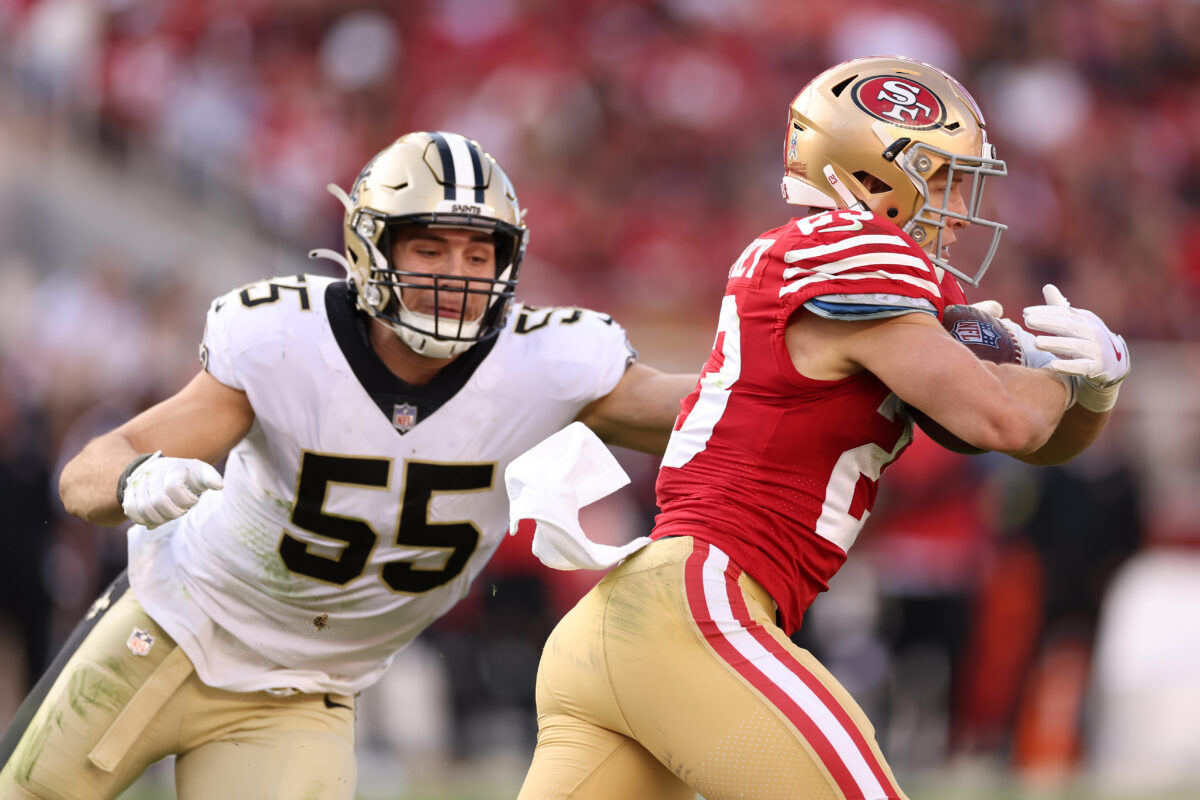 Few teams are in for as active an offseason as the New Orleans Saints, who look to start out over the 2023 salary cap by more than $50 million with 28 players headed for free agency in the spring. They’ll have to bring back many of those guys just to fill out the roster, but some players take priority over others.

So who should they prioritize for contract extensions? Here are four pending free agents that should be easy decisions when it comes time to talk shop:

The Saints will be in the market for a QB next year, and Jimmy Garoppolo’s big throws under pressure made for a compelling audition come 2023 free agency: 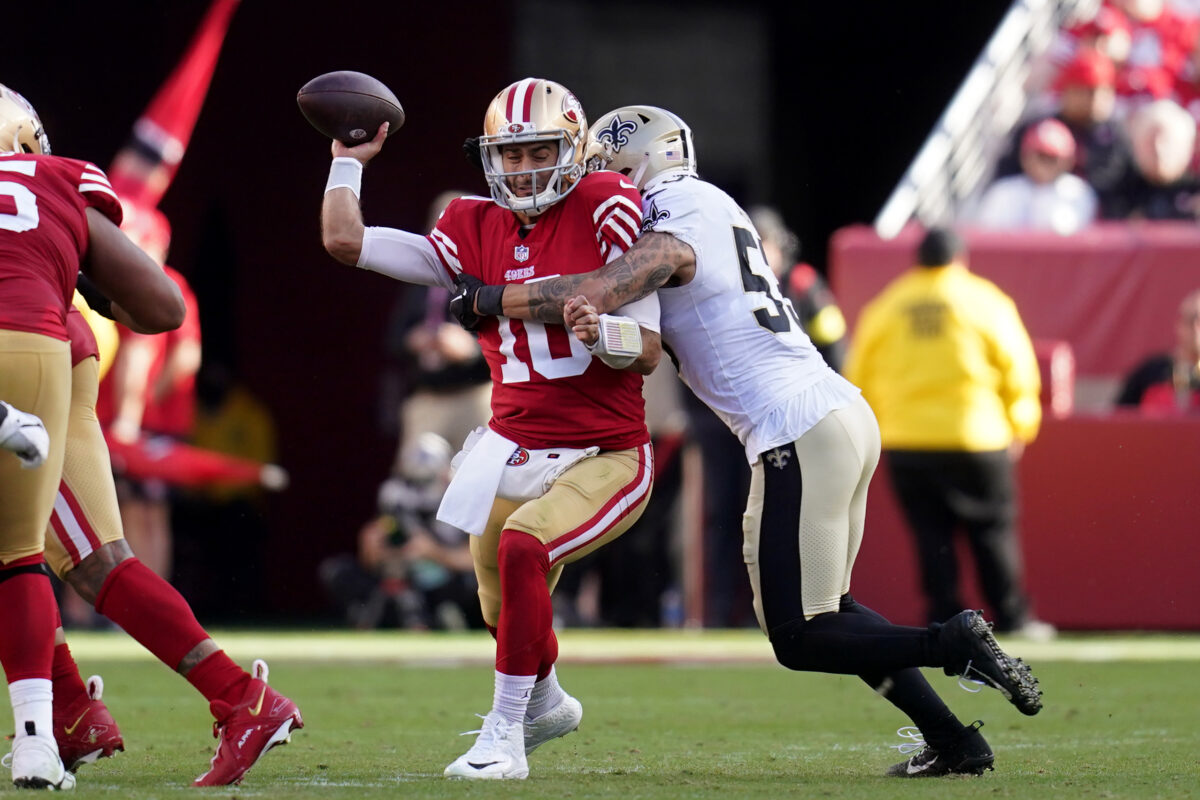 There’s no question that the New Orleans Saints will be looking for a quarterback in 2023. Andy Dalton hasn’t inspired anyone as a one-year rental after taking over for Jameis Winston, whose future with the team is in doubt. Winston has missed extensive time with injuries in each of his two years as the starter and he’s still on the bench. He’s also their only quarterback under contract for 2023, but the Saints can save $4 million by releasing him, and it certainly feels like that’s the way things are headed.

Jimmy Garoppolo gave them a firsthand look at an alternative in Sunday’s win, with the San Francisco 49ers quarterback completing a cool 70.3% of his passes without turning the ball over. And he often made plays under pressure. The Saints pass rush did its job and beat the 49ers blockers to hit and harry Garoppolo throughout the afternoon, and he made plays anyway. NFL Next Gen Stats tracking found that he was one of the most aggressive passers in Week 12, crediting him with his highest completion percentage above expectation (CPAE) score of the year at +4.6%. That metric factors in throws made under pressure and tight coverage by the defense, and it illustrates just how effective Garoppolo was on Sunday.

And he’s probably going to be the best available quarterback in 2023 free agency; Tom Brady is likelier to retire (for real this time) than start over somewhere else, and it would be stunning to see the Baltimore Ravens not work things out with Lamar Jackson (even if they need to use the franchise tag). Other veterans like Geno Smith, Taylor Heinicke, and Teddy Bridgewater probably stay with their teams, too.

That’s not to say Garoppolo is an elite passer who could fix all of the Saints’ problems. We’ve seen him at his lowest in the NFL, too. But he brings more credibility than other quarterbacks who could reach free agency like Sam Darnold, Drew Lock, Gardner Minshew, and Baker Mayfield. And he would be an upgrade over the passers New Orleans already has; Dalton has never won a playoff game as a starting quarterback, and Winston has never even gotten a team into the postseason. Garoppolo has gone 4-2 in the playoffs.

But, again, he isn’t perfect. The 49ers didn’t invest a ton of time and resources into getting his replacement for no reason, and Trey Lance should be the uncontested starter next year once Garoppolo leaves town. We’ve seen Garoppolo’s limitations lose games and even a Super Bowl. Navigating the salary cap to go get him wouldn’t make the Saints relevant again on its own.

It would be a nice start, though. Getting a veteran quarterback with a resume who isn’t a social media laughingstock like Dalton or Winston would at least show fans the Saints are taking this seriously. That trust was eroded quickly when Sean Payton quit on the team and lobbied for Dennis Allen as his successor on his way out the door. Whether Allen returns in 2023 or not, New Orleans can at least take a step in the right direction and go sign a proven quarterback who can get the ball to his playmakers. That would be a step up from where things are right now.

But we’re getting ahead of ourselves. The Saints still have five games left to play. Maybe Dalton suddenly turns it around or Winston gets back into the starting lineup and sparks a comeback. Maybe the run the table and get into the playoffs. Anything can happen, right?

Things haven’t gone as expected for the Saints this year, so some eyes are already being drawn to 2023. These 28 players could be free agents at the end of the 2022 season: 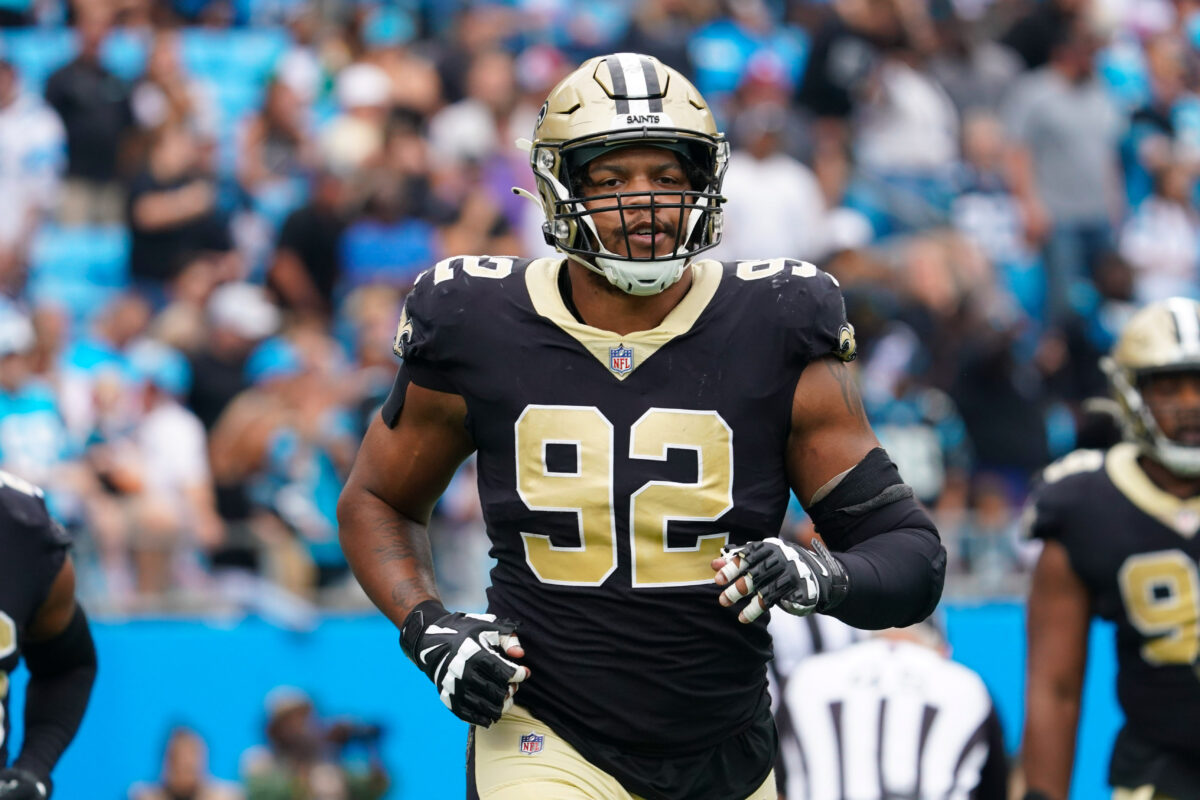 Things haven’t exactly gone according to plan for the New Orleans Saints this year, so it makes sense that some fans are already looking ahead to 2023. And the outlook isn’t pretty: New Orleans will be over the projected salary cap by more than $50 million, with 28 players whose contracts are up at the end of 2022 season.

Many of those free agents will be unrestricted, meaning they can entertain all offers, while some are going to carry restricted status (meaning the Saints will have a right to match any contract offers) and a few carry exclusive-rights status, which limits their options to playing for New Orleans or not at all.

That group includes starters like defensive end Marcus Davenport, defensive tackle David Onyemata, quarterback Andy Dalton, and veterans such as running back Mark Ingram II, slot receiver Jarvis Landry, and returns ace Deonte Harty. It’ll be tough for the Saints to re-sign everyone, but in some cases they may opt to just part ways. Here’s the list of pending Saints free agents headed for the open market in 2023:

Which Saints players could be next for an extension? Starting defensive linemen Marcus Davenport and David Onyemata are among 27 pending free agents in 2023: 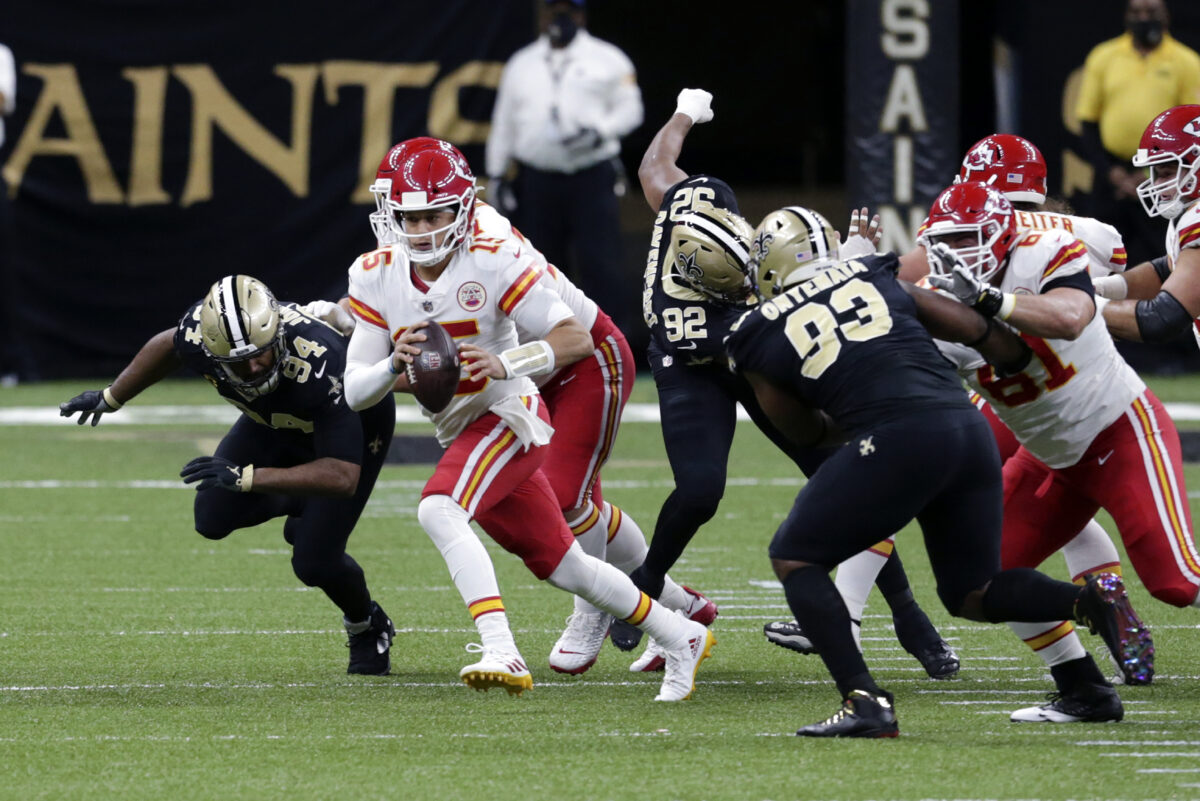 A lot has changed since we last examined the list of New Orleans Saints players headed for free agency in 2023. The top two players on our list have seen things go in vastly different directions — starting center Erik McCoy reached an agreement on a five-year contract extension, while fan-favorite nickel corner C.J. Gardner-Johnson was traded to the Eagles after talks broke down. So what’s next for everyone else?

Many of these players are going to be unrestricted free agents who can field offers from other teams, unless the Saints sign them to an extension ahead of time (or issue the tag for a franchise or transition player). Some of them will have restricted status, which basically ensures New Orleans will get the right of first refusal on opposing offers, and maybe bring in some compensation should the player leave. And a few are stuck as exclusive-rights free agents who will have to choose between playing for the Saints or not playing at all, unless the team relinquishes the opportunity.

And a handful of pending Saints free agents will be in position to cash in. Market value estimates from the team at Spotrac suggest defensive end Marcus Davenport could reel in as much as $23.2 million per year on the open market; others like wide receiver Deonte Harty ($9.8 million per year), defensive tackle David Onyemata ($7.8 million per year), and defensive lineman Shy Tuttle ($6.3 million) are also seeing high estimates. But those are just one projection from a single outlet, and a lot can change in the months ahead. So don’t take those numbers as facts. They’re just something to note in looking ahead.

But that’s all a story for another day. Here is the full list of 27 pending Saints free agents for 2023:

38 Saints players are currently slated for free agency in 2023, ranging from Marcus Davenport and David Onyemata to Marquez Callaway and Tony Jones Jr.: 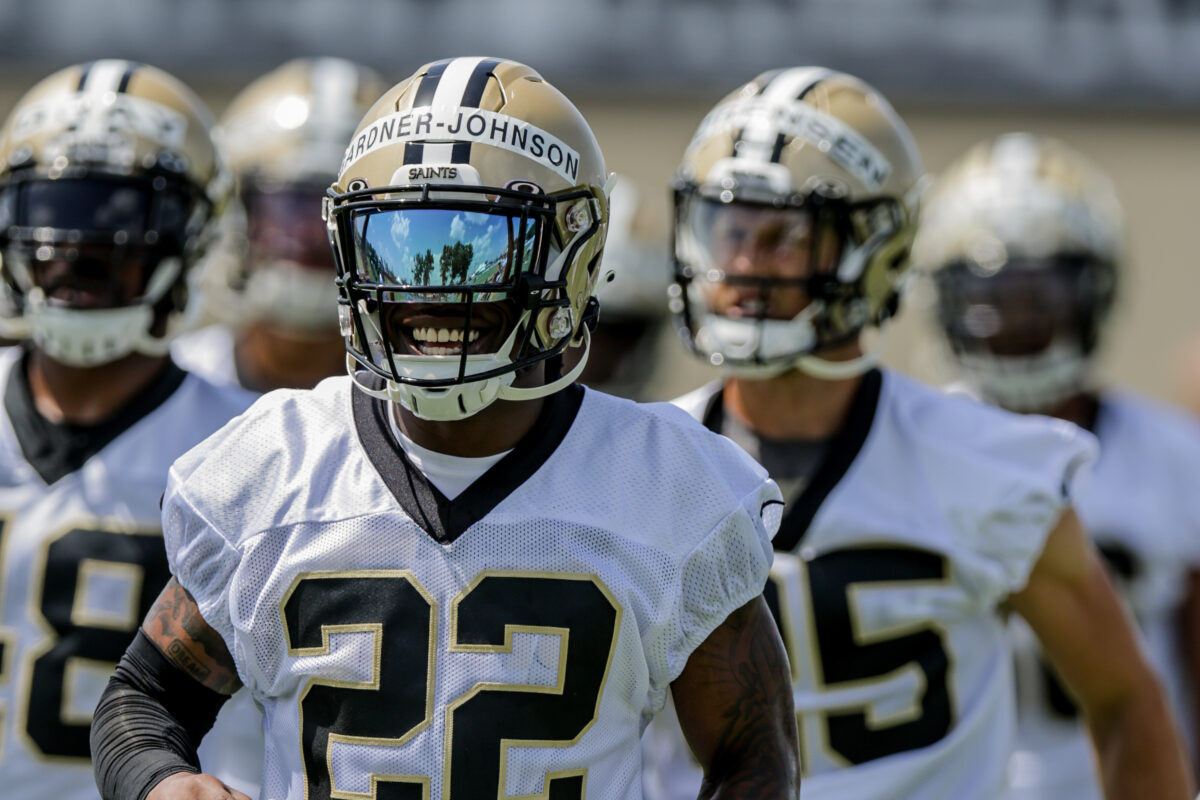 Few teams stay busy like the New Orleans Saints. Their unorthodox salary cap maneuvering means every move is part of a larger plan, with possible ramifications accounted for months and years down the road. And with 38 of the 90 players currently under contract headed for free agency after the 2022 season, via Over The Cap, it’s good to keep tabs on who may not be long for New Orleans.

Let’s remember that there are a couple of different free agent designations. The vast majority of players (including 28 of the Saints’ 38 pending free agents) will be unrestricted free agents at the start of the new league year. Those with three seasons’ worth of experience will be restricted free agents (including Saints players like wide receiver Marquez Callaway and punter Blake Gillikin), which gets a little complicated but typically means New Orleans will have the opportunity to match any offers from other teams. And those with two years or fewer behind them (like offensive lineman Calvin Throckmorton and running back Tony Jones Jr.) will be considered exclusive rights free agents, who the Saints can retain at non-compete minimum salaries.

Additionally, three players — defensive linemen Marcus Davenport, David Onyemata, and Tanoh Kpassagnon — are on track to see the void years written in through contract restructures expire in the spring. That will make them unrestricted free agents, unless the team signs them to extensions beforehand. And because the Saints restructured those deals they would leave behind a whopping total of $19.6 million for Onyemata ($10.1 million), Davenport ($7.6 million), and Kpassagnon ($1.9 million) in dead money that was previously moved around. So we should expect at least one or two of them to re-up with New Orleans before next March, which would help keep good players in the lineup and blunt any salary cap damage.

So with all of that said: here are the 38 Saints players who are on track to be pending free agents once the 2022 season is in the books. 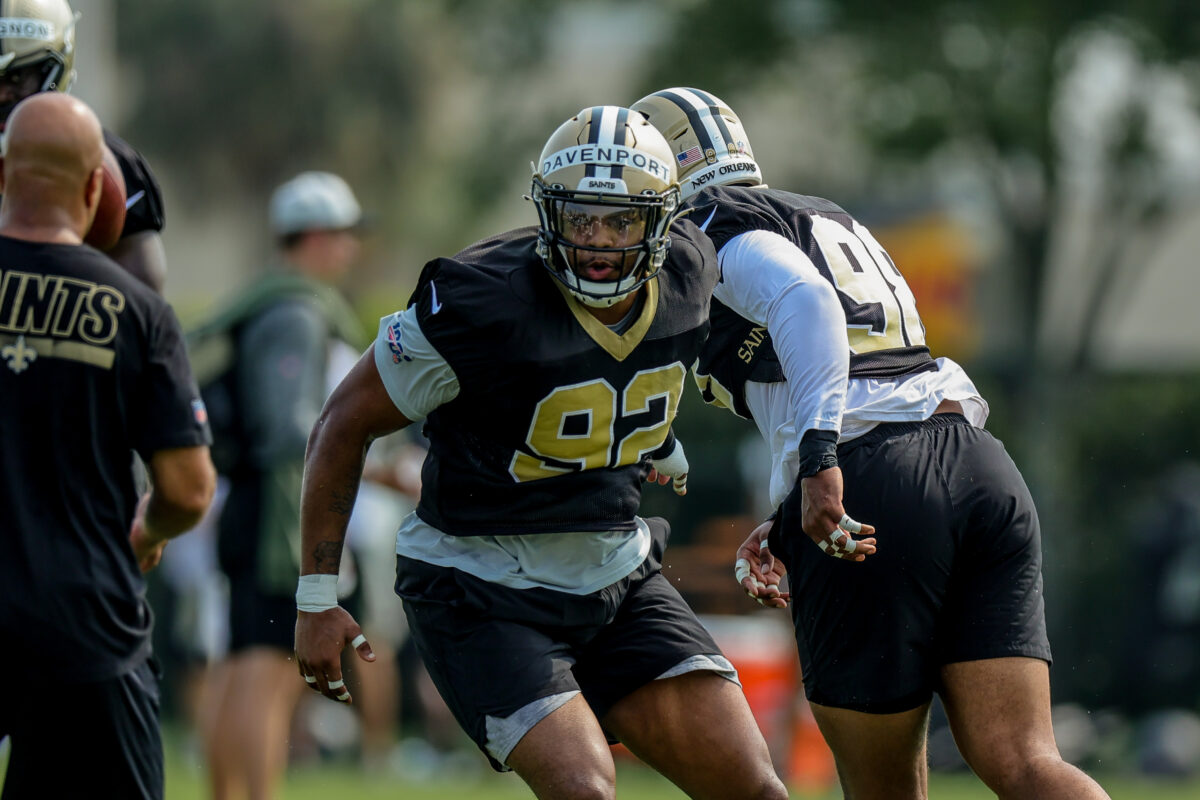 The Athletic’s Sheil Kapadia put together a list of the top 30 pending free agents for 2023, and several New Orleans Saints players made the cut. That feels ominous after the team parted with two of their highly-rated free agents this offseason in free safety Marcus Williams and left tackle Terron Armstead, but each situation is different, and it’s possible the Saints act more aggressively to retain homegrown talent.

Defensive end Marcus Davenport is the highest-rated Saints player on Kapadia’s lists of pending free agents, ranked at No. 20 overall. His take on Davenport ahead of the 2022 season:

“He’s coming off a career season in which he produced nine sacks and 16 quarterback hits in 11 games. Durability has been an issue for Davenport. He’s missed 17 games in four NFL seasons. But young, versatile pass rushers with upside are always in demand. Davenport is another player who has a lot to gain with a strong 2022 showing.”

Kapadia also listed Saints center Erik McCoy at No. 25, making him the best pending free agent at his position. Here’s what he wrote of McCoy:

“He’s one of the best young centers in the NFL. McCoy has started 44 games in three seasons. He did not allow a sack on 433 pass block reps last year, according to Pro Football Focus. Currently, the top centers make between $13 million and $14 million per year. Given his age, McCoy could top that if he delivers a strong showing in 2022.”

New Orleans knows this. The Saints have been preparing for it. They’re currently over the projected 2023 salary cap (estimated at $225 million) by more than $33 million, but they can roll over a lot of this year’s unspent $19 million to wear that down. They’ve been drafting project players early like defensive end Payton Turner and center-guard convert Cesar Ruiz in case some higher-profile talents move on. They can also restructure some contracts to get under the cap in a hurry, as they’ve done before, if they so choose. The point is that the Saints have flexibility to do what they want.