Wisconsin basketball matches up against an Atlantic 10 team in the opening round of the Battle 4 Atlantis: 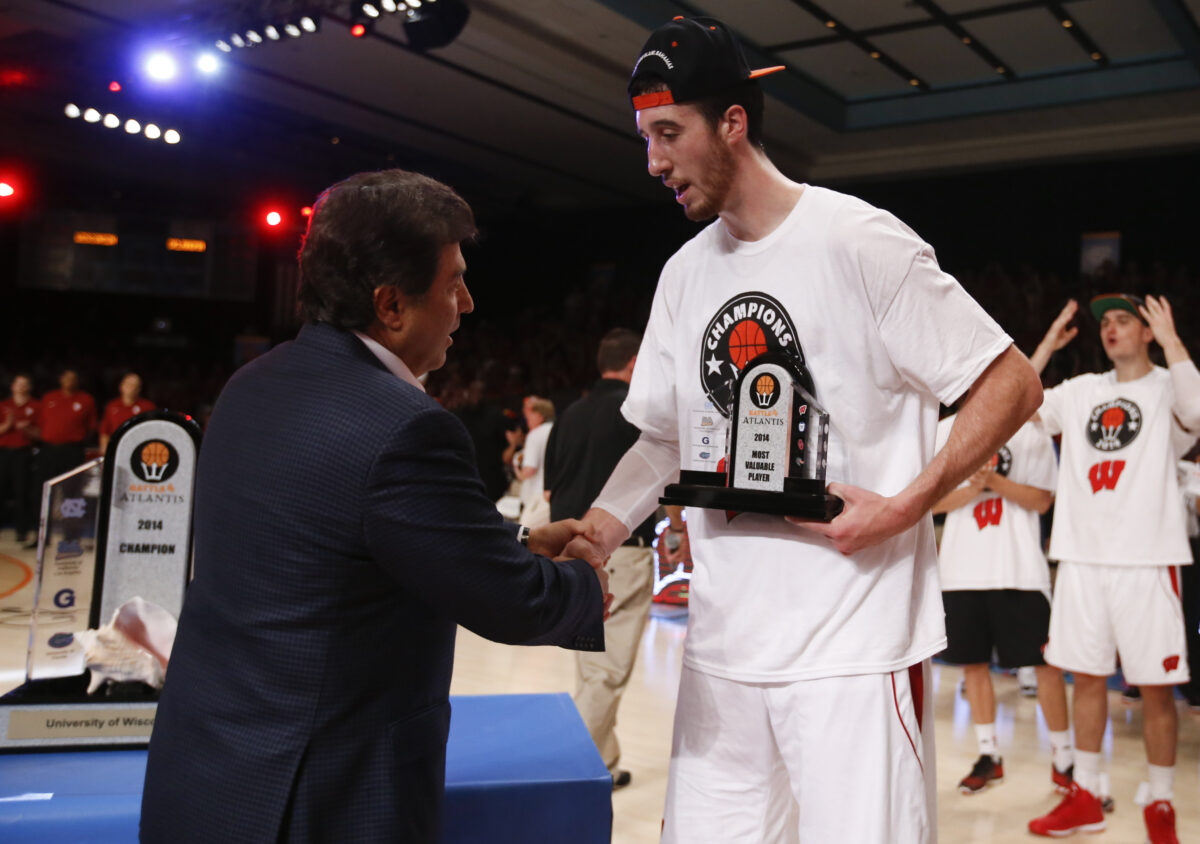 The Wisconsin Badgers will be participating in the Battle 4 Atlantis early season tournament in Paradise Island, Bahamas, this season from Nov. 23-Nov. 25.

The Badgers’ opening day matchup was recently announced against the Dayton Flyers on Nov. 23 at 1:30 p.m. CST. The game will be televised on either ESPN or ESPN 2. This will be Wisconsin’s third appearance in the tournament, which they last won in 2014 with legend Frank Kaminsky taking home the tournament’s MVP award.

Hopefully, this young Wisconsin team can use the tournament to develop chemistry and find their identity ahead of the start of the Big Ten regular season.

Mark your 🗓 because Day 1 of the @badboymowers Men’s #Battle4Atlantis games are set! 🔥

Five former Badgers showcased their talents in the NBA summer league; let’s see how they fared: 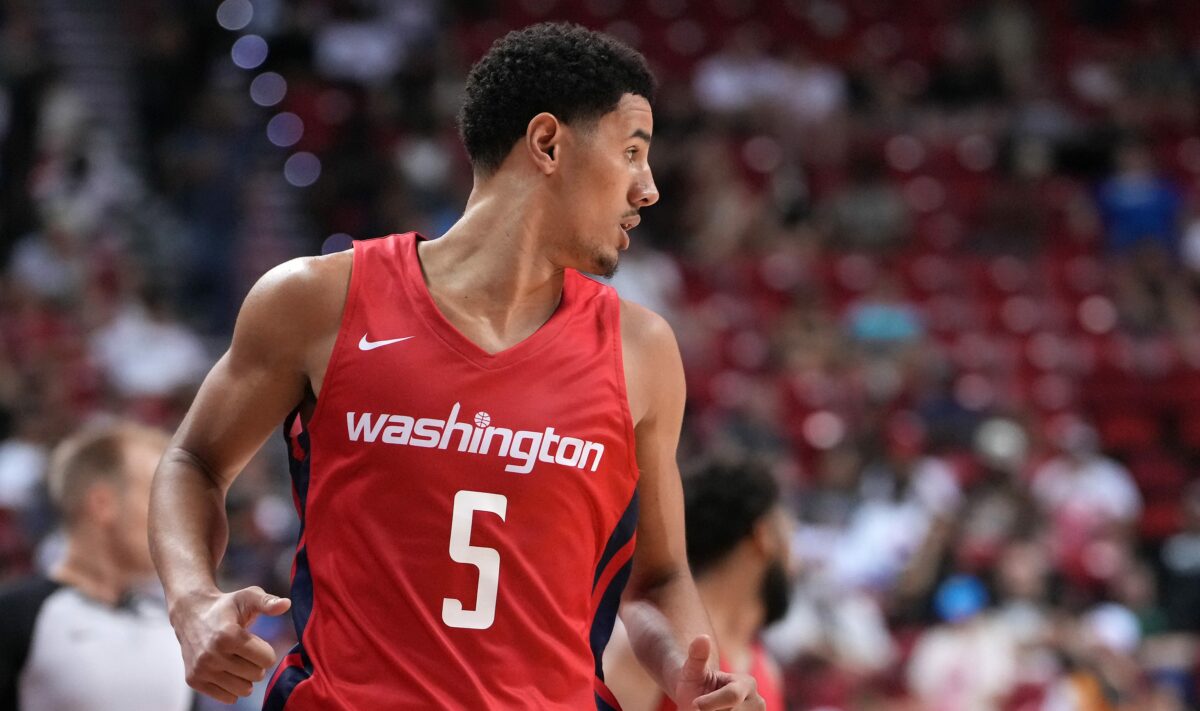 The University of Wisconsin has only two players signed to guaranteed NBA contracts entering the 2022 season, Frank Kaminsky and lottery pick Johnny Davis, who was the first player selected during the Greg Gard era.

However, this summer, former Badgers Vitto Brown, Nate Reuvers, Micah Potter, and Aleem Ford also had a chance to showcase their talents in front of NBA scouting personnel in Las Vegas.

Summer league offers a little something for everyone who partakes. For rookies, it’s their first chance to get a taste of the next level. For other young players, it’s an opportunity to show their growth from one year to the next. For journeymen that have scratched and clawed their way to be in Las Vegas, it’s a last-ditch effort to make the leap from overseas to the association. 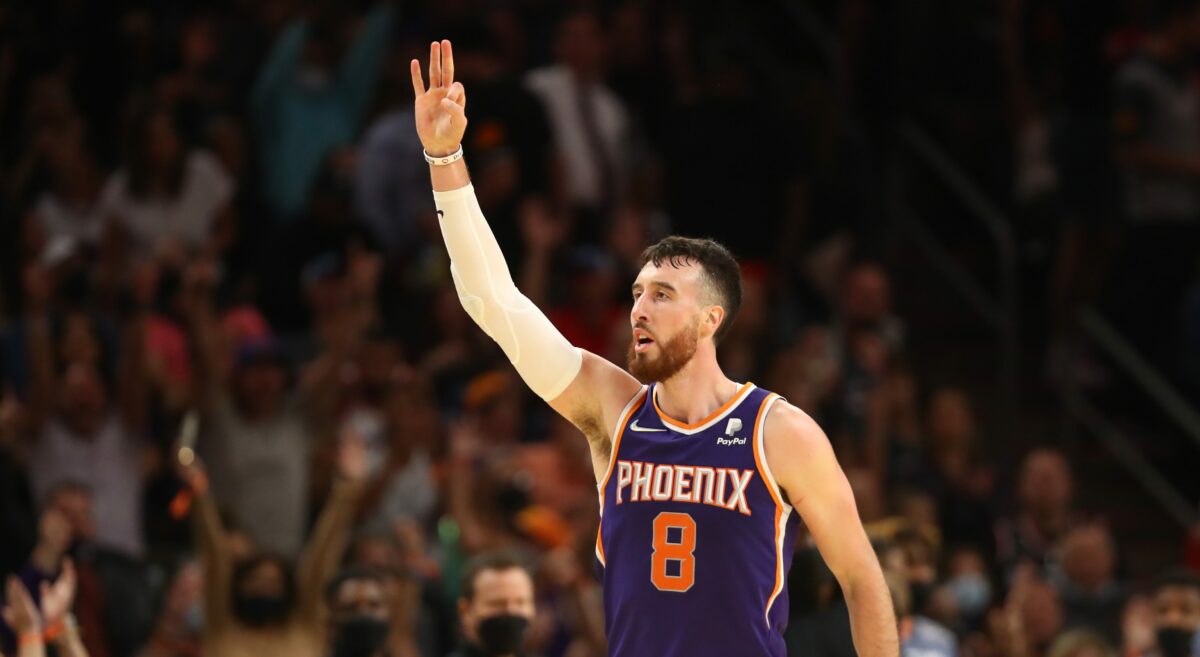 On Tuesday, the Atlanta Hawks officially announced the signing of former Badgers National Player of the Year Frank Kaminsky on their Twitter account.

Over seven seasons, Kaminsky has appeared in 377 NBA games for the Charlotte Hornets and Phoenix Suns.

In 2021, the 7-foot, 240-pound center averaged 10.6 points, 4.6 rebounds, and 1.4 assists in just over 20 minutes per game before suffering a stress reaction in his right knee that would require surgery. He’s now fully healed and will be ready to play once camp begins.

Chris Kirschner of The Athletic reported his one-year deal would be fully guaranteed and worth the veterans minimum.

Kaminsky, who is 29 years of age, joins rookie Johnny Davis as the only Badgers currently signed to an NBA roster for the 2022 season.

Former Badgers big man Frank Kaminsky is back in the NBA: 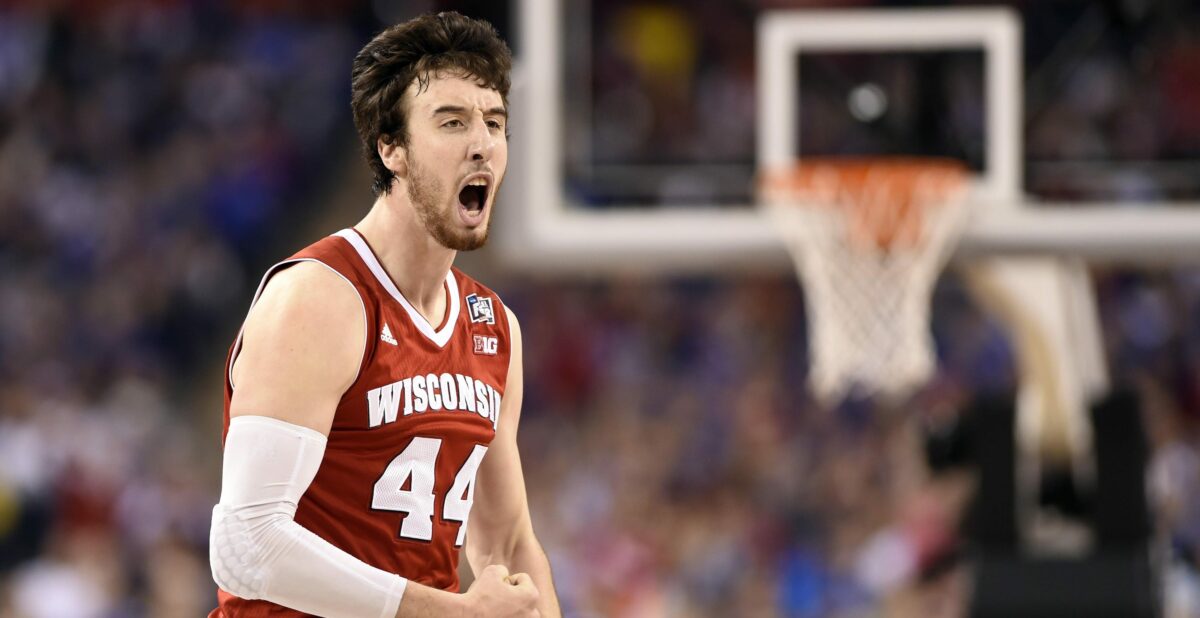 According to a report from ESPN’s Adrian Wojnarowski, former Badgers big man Frank Kaminsky has agreed to a one-year deal with the Atlanta Hawks after spending his last three seasons in Phoenix.

Chris Kirschner of The Athletic also reported his one-year deal would be worth the veterans minimum.

Last season, the 7-foot, 240-pound center averaged 10.6 points, 4.6 rebounds, and 1.4 assists in just over 20 minutes per game before suffering a stress reaction in his right knee that would require surgery.

Wojnarowski also mentions that the former Wooden Award recipient has fully recovered from his right knee surgery and will be available once camp begins. He’ll join an Atlanta Hawks frontcourt that includes John Collins, Clint Capela, and Onyeka Okongwu.

A native of Lisle, Illinois, Kaminsky finished his senior season at UW, averaging 18.8 points, 8.2 rebounds, 2.6 assists, and 1.5 blocks on 41% shooting from beyond the arc.

Kaminsky, who is 29 years of age, joins rookie Johnny Davis as the only Badgers currently on an NBA roster.

Free agent Frank Kaminsky has agreed to a one-year deal with the Atlanta Hawks, his agents Mark Bartelstein and Andy Shiffman of @PrioritySports tell ESPN.

On Thursday, a former Badgers forward made his NBA Summer League debut for the Orlando Magic: 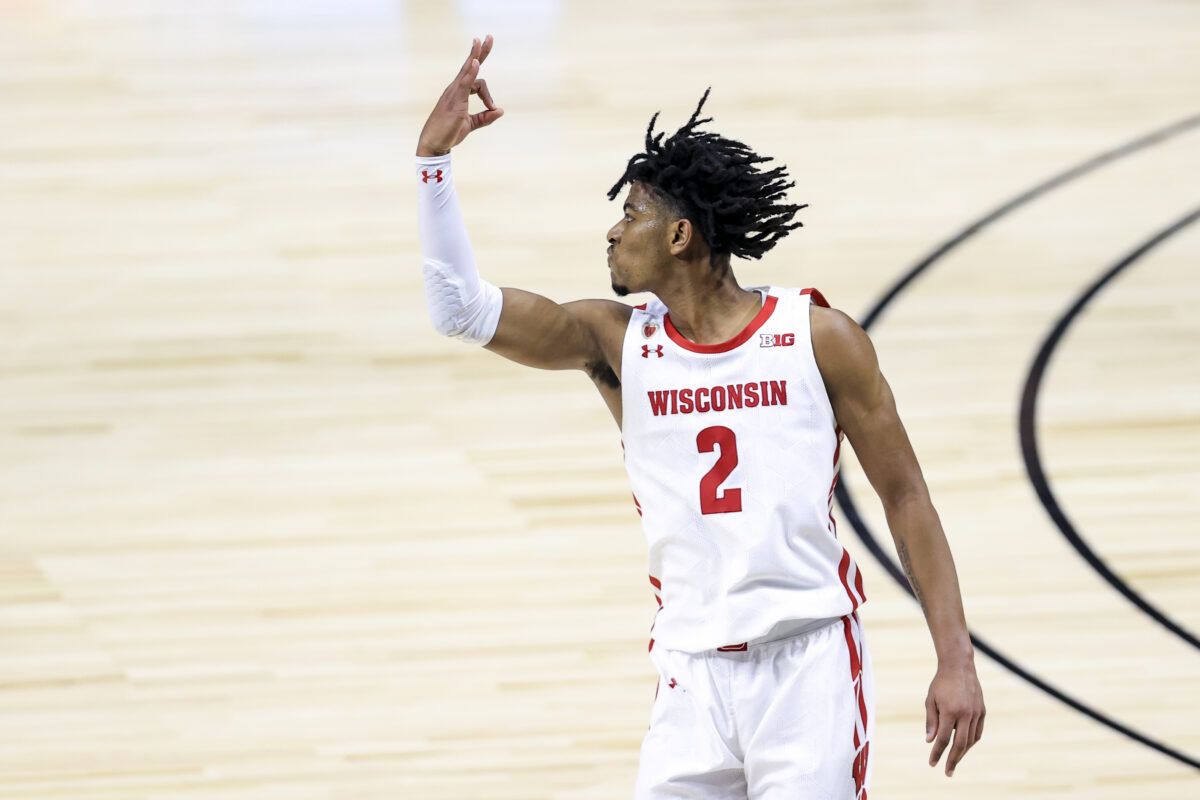 On Thursday night, former Badgers forward Aleem Ford made his NBA summer league debut for the Orlando Magic against the Houston Rockets.

In 14 minutes of action, Ford totaled five points, two rebounds, and two assists on 2-of-7 shooting from the field.

In December of 2021, Ford signed a 10-day contract with the Orlando Magic and would appear in five games before returning to their G-League affiliate to finish the season.

The former Badger appeared in 126 career games (82 starts) in his four seasons with the UW program.

Aleem Ford really quick change of direction as he gets it back to his left and finishes at the rim. pic.twitter.com/ZCWQhbOXp4

Watch Johnny Davis in his rookie minicamp with the Washington Wizards: 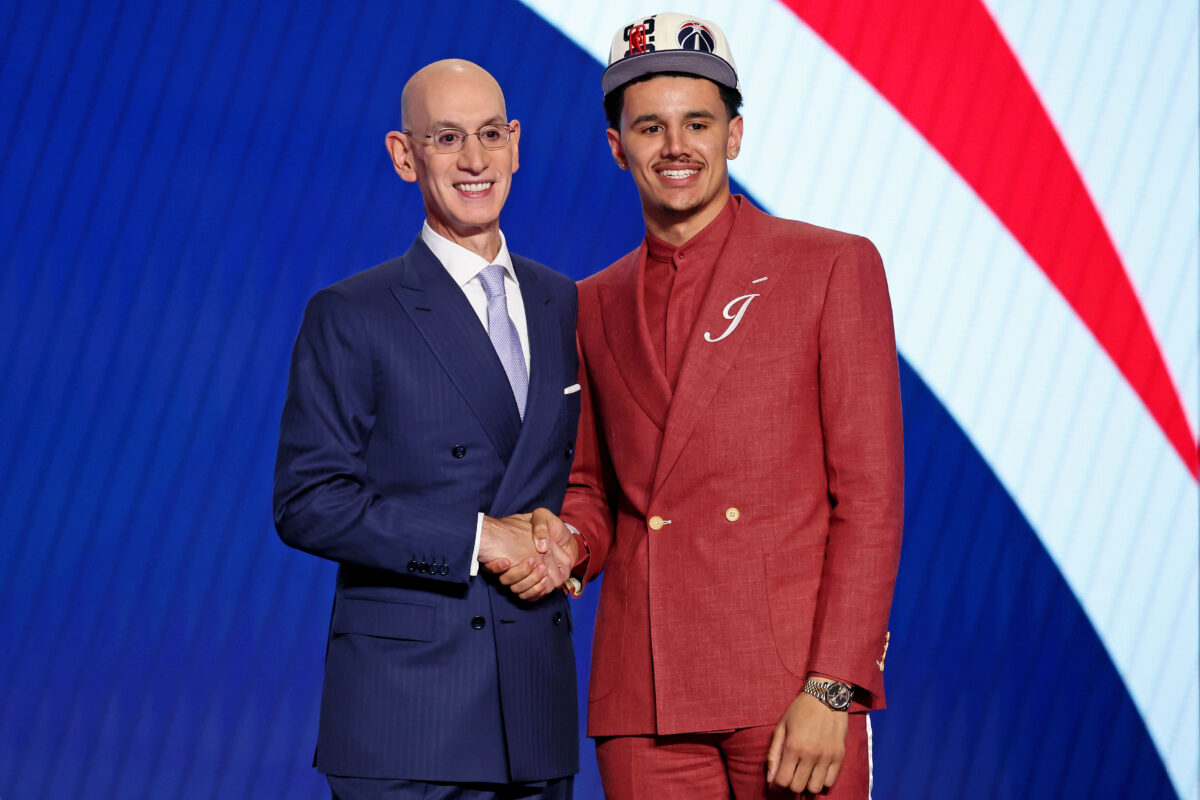 Former Wisconsin guard Johnny Davis is making a strong first impression with the Washington Wizards as he completed his rookie minicamp with the team.

Related: REPORT: Pac-12 and ACC in talks for ‘loose partnership’ with a championship game

Davis was ‘mic’d up’ for some of the earlier practices, which allowed fans to hear his on-court presence and conversations with coaches. The short video showing some highlights from the former Badger and minicamp was narrated by Wizards’ summer league head coach Zach Guthrie, who talked about the importance of this time for Davis’ development.

The Lacrosse, Wis., native will make his debut for the Wizards in their first summer league game on July 9th against the Detroit Pistons. 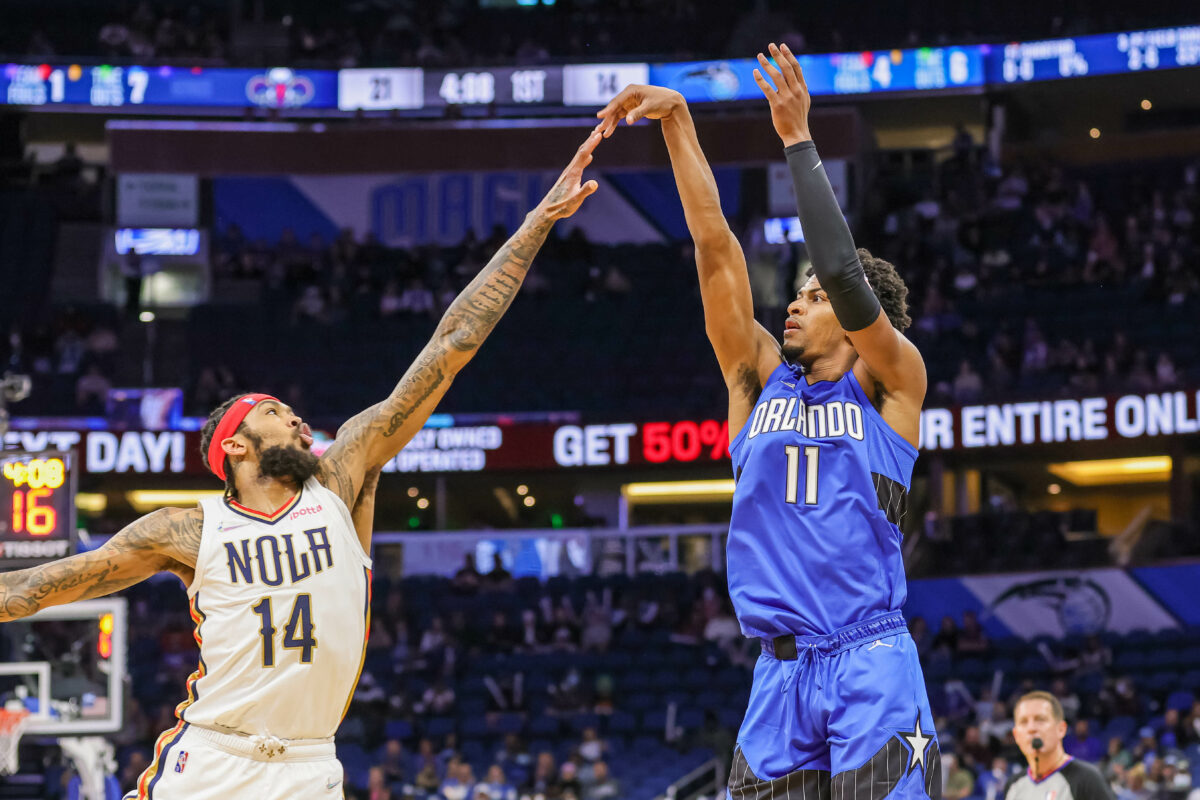 On Wednesday morning, the Orlando Magic announced their roster for the 2022 NBA Summer League and former Wisconsin forward Aleem Ford made the cut.

After being drafted No. 1 overall in the Puerto Rican BSN by Leones de Ponce last year, Ford played in 32 games averaging 7.6 points and 2.7 rebounds. In November, the former Badger was picked up by the Lakeland Magic the G League affiliate of Orlando.

After 12 games with Lakeland, Ford was signed to a 10-day contract in December where he made his NBA debut with the Magic. Unfortunately, Ford was sent back down to Lakeland at the end of his contract, but hopefully, his play this summer can get him onto an NBA roster.

Some of the best Twitter reactions to Johnny Davis being drafted with the No. 10 pick by the Washington Wizards: 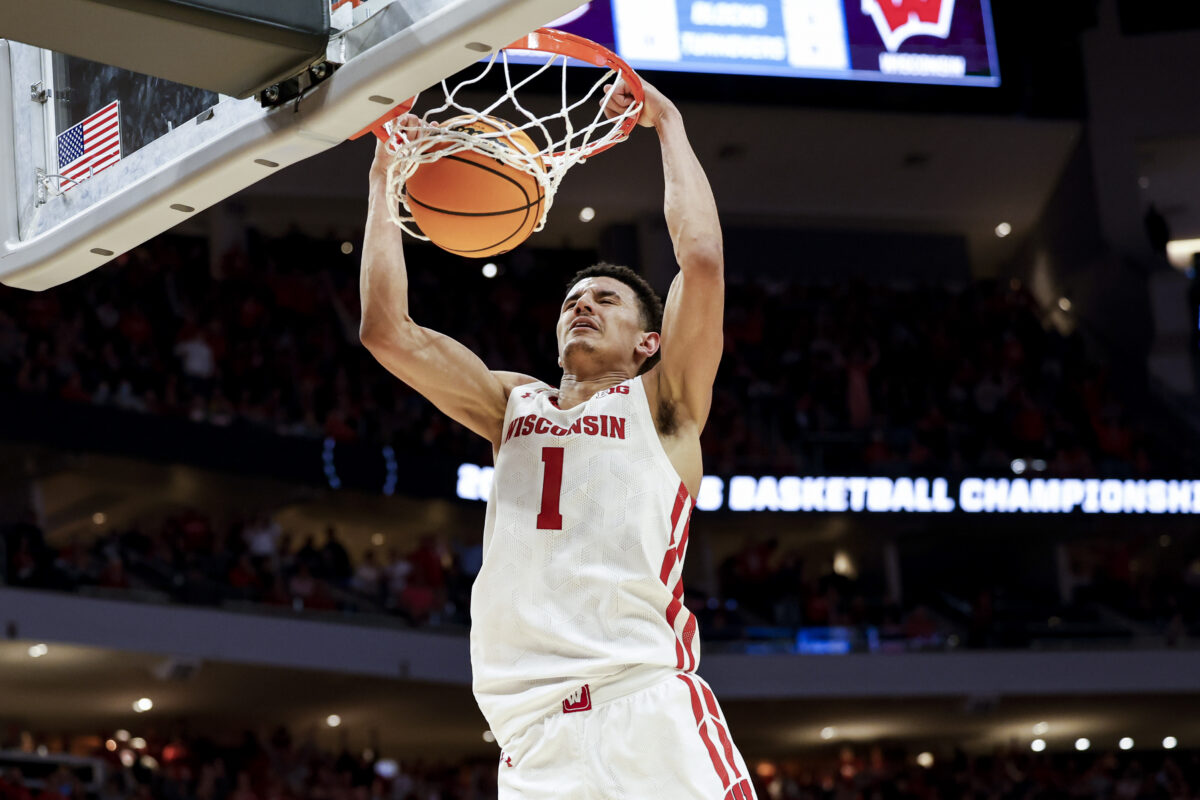 On Thursday night, former Wisconsin guard Johnny Davis was selected in the lottery of the first round of the 2022 NBA draft by the Washington Wizards with the No. 10 pick.

Davis was one of the best players in the country last season and helped the Badgers to a shared Big Ten regular season title and NCAA Tournament appearance. In addition, Davis was named a first-team AP All-American and averaged 19.7 points, 8.2 rebounds and 1.2 steals in his sophomore season.

The former Wisconsin star was the first Badger selected as a lottery pick since the Charlotte Hornets drafted Wisconsin legend Frank Kaminsky with the No. 9 overall pick in 2015.

Here are some of the best Twitter reactions to Johnny Davis joining the Washington Wizards:

Johnny Davis is the first Badger selected in the NBA Draft since 2015: 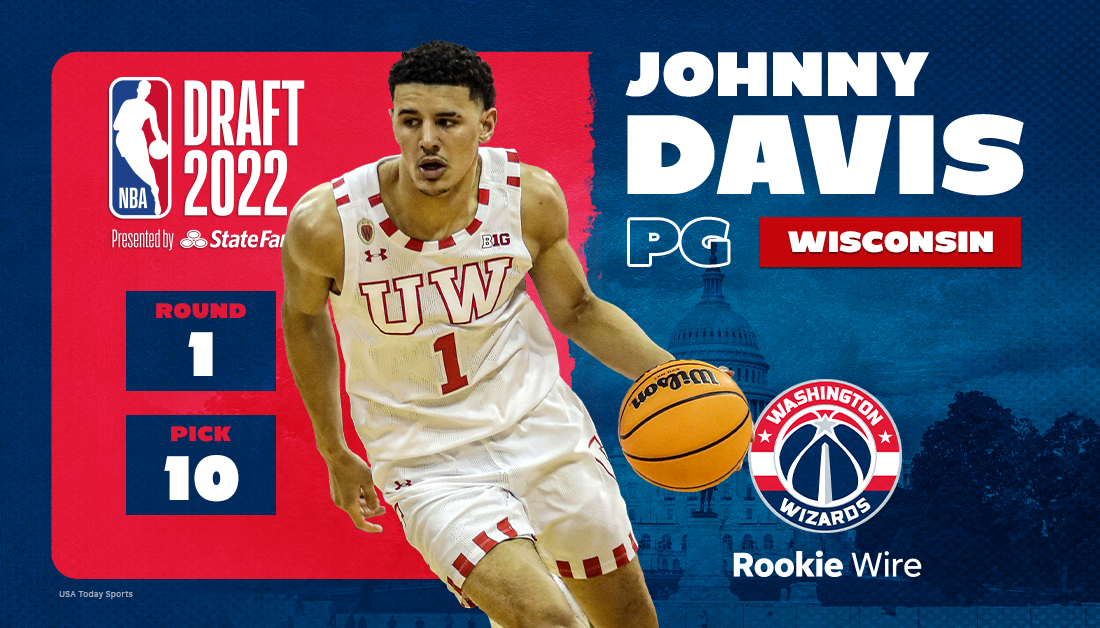 On Thursday night, a life-long dream of playing professional basketball finally became a reality when the Washington Wizards selected Badgers sophomore guard Johnny Davis with the 10th overall pick in the first round of the 2022 NBA Draft.

It was a meteoric rise into the national spotlight for the Badgers’ star guard – highlighted by a 30-point game against Houston in the Maui Invitational and a 37-point, 14 rebound performance on the road against Purdue at Mackey Arena.

The La Crosse (Wisc.) native is the first player from the University of Wisconsin selected in the NBA Draft since 2015, ending a seven-year drought by the program. Additionally, he was just the fourth Badgers player to average at least 19 points per game over the last 30 seasons.

Standing at 6-foot-5, 196-pounds, Davis has the ability to score from all three levels, is a versatile defender, and has the work ethic and determination necessary to reach his ceiling.

With the 10th overall pick in the 2022 NBA Draft, the @WashWizards select our guy @JohnnyDavis!#OnWisconsin x #NBADraft pic.twitter.com/TH4G5kSRZC 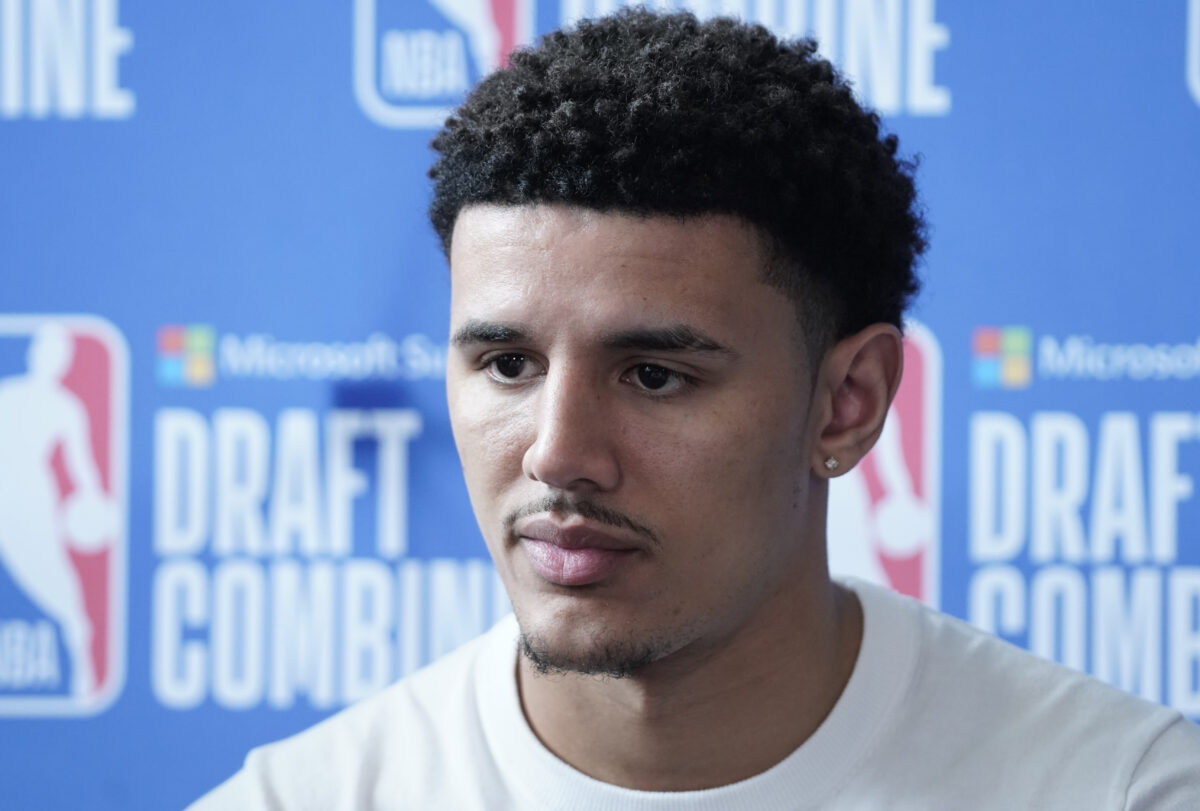 On the eve of the 2022 NBA Draft, Badgers sophomore guard Johnny Davis is expected to be the first player from the University of Wisconsin selected since 2015.

The former La Crosse Central standout was also just the fourth Wisconsin player to average at least 19 points per game over the last 30 seasons.

You can watch the full video of Davis reflecting on his path to the 2022 NBA Draft below:

Expected to be the first Wisconsin player drafted since 2015, Johnny Davis sees the 2022 NBA Draft as the day of his dreams. Reflecting on his love for the game and his path to draft, the Big Ten Player of Year discusses how the Association will push him to be the best. @Jeep pic.twitter.com/I3tDPIHO1c