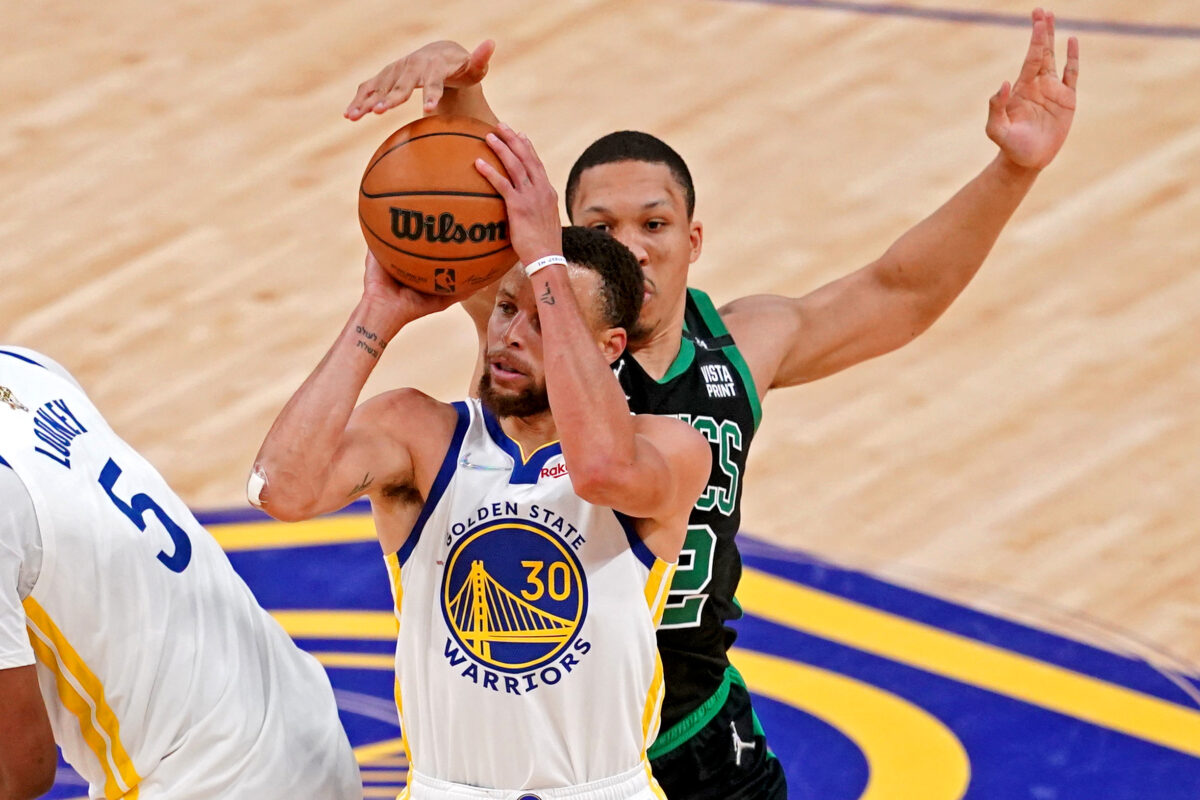 The Boston Celtics may have lost the 2022 NBA Finals to Steph Curry and the Golden State Warriors, but that doesn’t mean the two teams treat each other like mortal enemies.

Celtics reserve forward Grant Williams wished his primary obstacle to hanging a banner this summer well after news broke that Curry had finished his degree with Davidson and will be inducted into that school’s Hall of Fame.

“What’s up, brother?” the former Tennessee player asked rhetorically. “First off I wanted to say congratulations. It’s a huge accomplishment, it’s a blessing.”

“I wore 30 in high school because of you, and now I didn’t win a ring because of you,” added Williams, throwing in a good-natured barb, hinting their paths might cross again in the 2023 NBA Finals for a rematch.

Take a look at the clip embedded above to hear his words in full courtesy of the folks over at NBC Sports Bay Area.

While the injury is less bad than it looked, it’s still enough to crush Gallo’s dreams of competing in the EuroBasket in front of a home crowd. 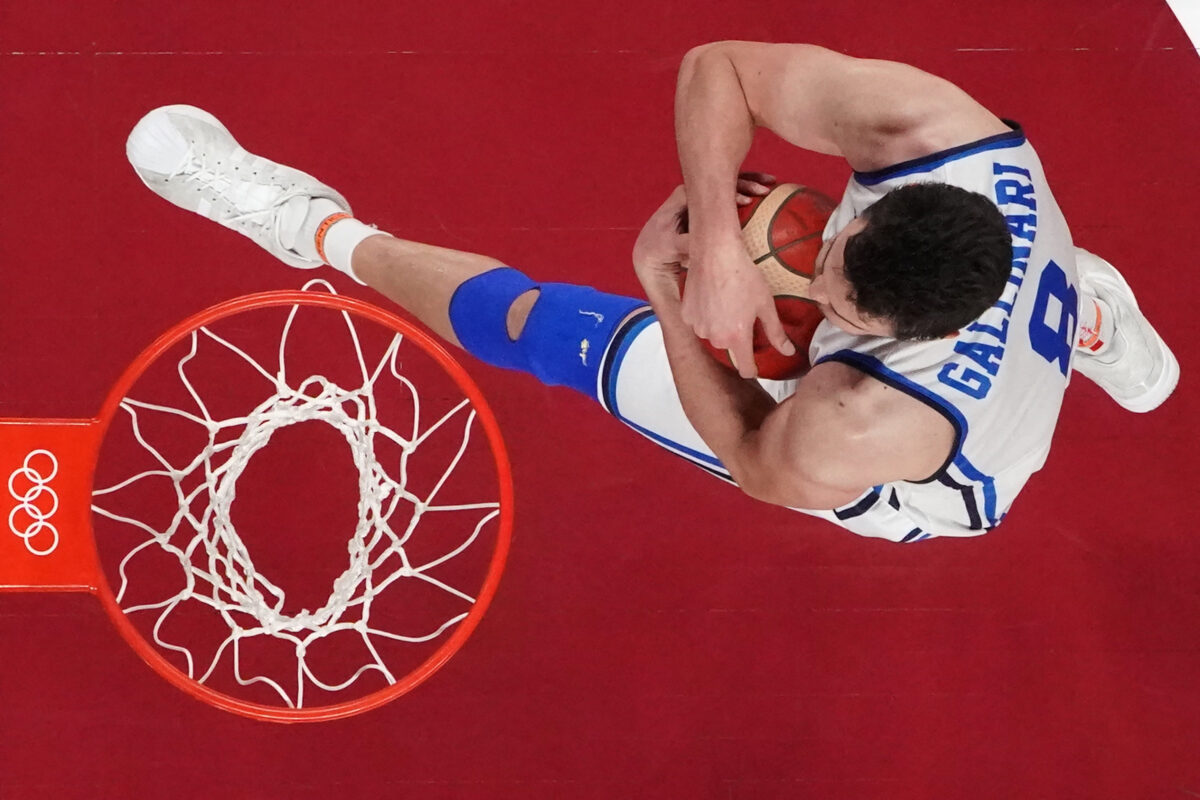 Officially ruled out of EuroBasket play per Sportando’s Emiliano Carchia, Boston Celtics veteran forward Danilo Gallinari took to his Instagram to react to his meniscal tear sustained with the Italian National Team on Saturday afternoon in the final frame of a FIBA World Cup qualifying match against the National Team of Georgia.

Gallo avoided a more serious injury involving his surgically-repaired left ACL. Still, he was clearly upset about not being able to continue playing for Italy this summer as a result of the meniscal tear diagnosis following an MRI Sunday morning. It confirmed the lesser, but still impactful, injury that could see him miss several weeks to multiple months depending on the damage.

Once a Celtic always a Celtic: Where to find former Boston players signing new deals https://t.co/dGveVskaxp 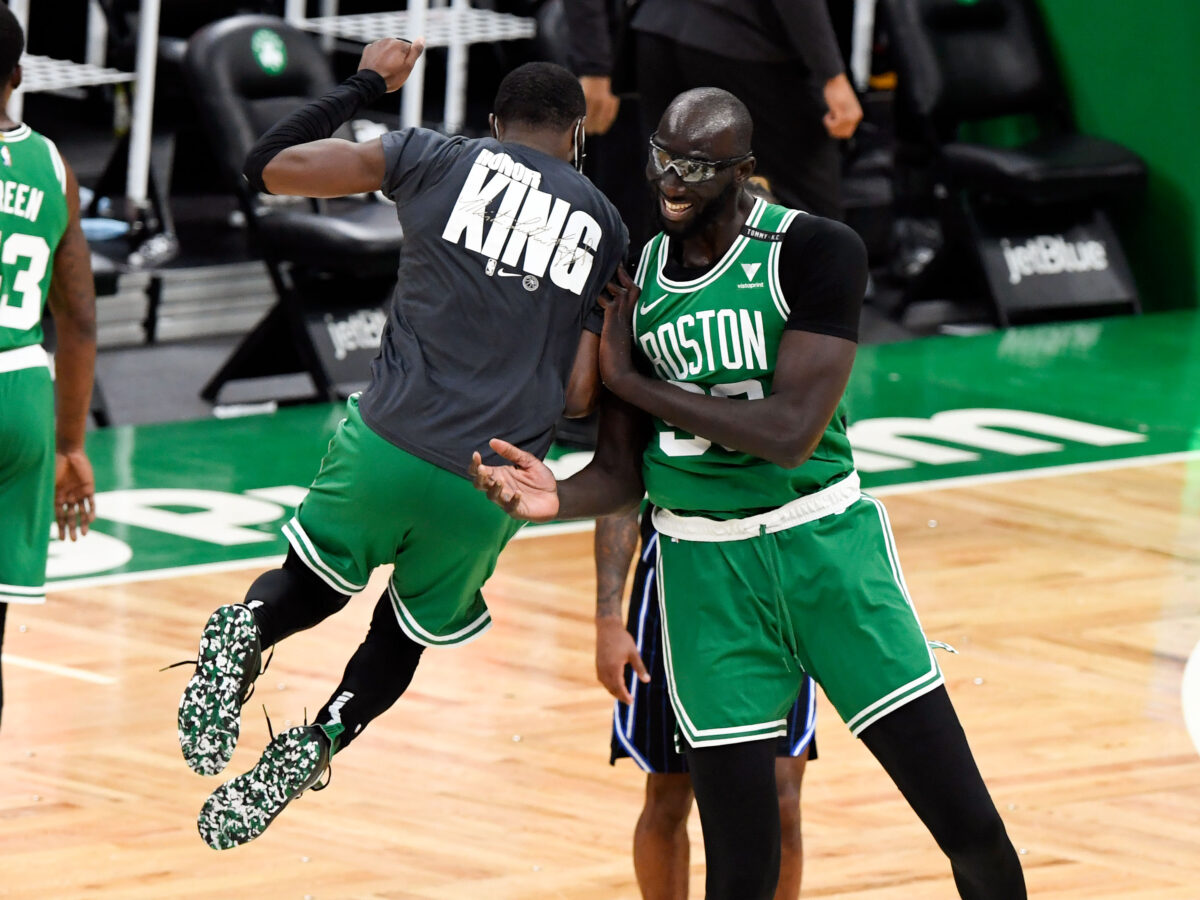 Former Boston Celtics big man Tacko Fall may no longer be on the team he first played for in the NBA (and is headed to China, in fact), but that doesn’t mean he’s forgotten about the players he broke into the league alongside, especially star Celtics wing Jaylen Brown.

Speaking at TJ Kidd’s celebrity basketball game with Bally Sports’ Brandon “Scoop B” Robinson on the Georgia native’s inclusion in rumors tying him to a potential Kevin Durant trade, the former Celtics center said: “I think Jaylen is very disrespected. I think he doesn’t get the credit he deserves sometimes; he’s a great player.”

“Jaylen is nice … he’s just got to keep doing what he’s doing. He’s very focused; he’s very locked in. He knows what he wants to accomplish, and they’re doing well.”

What will the Boston Celtics starting lineup look like in the 2022-23 NBA season? https://t.co/Xx8UZvTD7f

Check out the Big Ticket getting to know association football, or as we call it in the states, soccer. 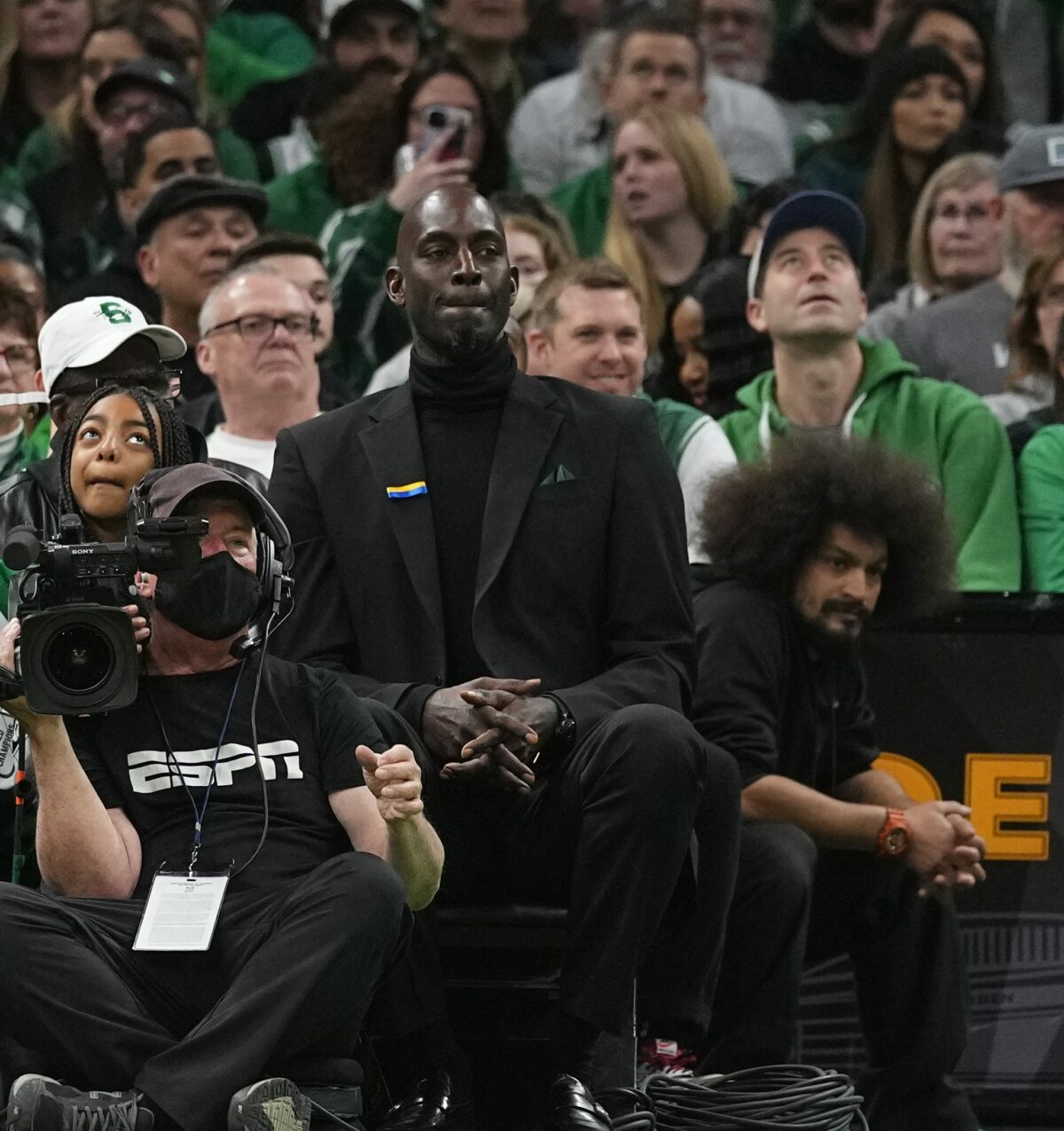 There seems to be a growing trend among current and retired NBA players to get into association football — or as we in the U.S. tend to call it, soccer — and Hall of Fame Boston Celtics big man Kevin Garnett might well end up among them after a recent experience The Big Ticket had on a visit with the team Celtics co-owner Steve Pagliuca made a bid for not all that long ago.

The club in question is the world-famous Chelsea Football Club, and the visit saw Garnett take in an exhibition tilt between Chelsea and Club America at Allegiant Stadium in Las Vegas, Nevada, courtesy of his host for the event, U.S. Men’s National Team star, Christian Pulisic.

If you want to see what KG thinks of the sport with your own eyes, be sure to take a look at the clip embedded below, courtesy of the folks over at the Showtime Basketball YouTube channel.

Check out the “Celtics Lab” podcast on:

“He didn’t invite me to do that,” said Stevens. “I’ve heard they’re ridiculous.” 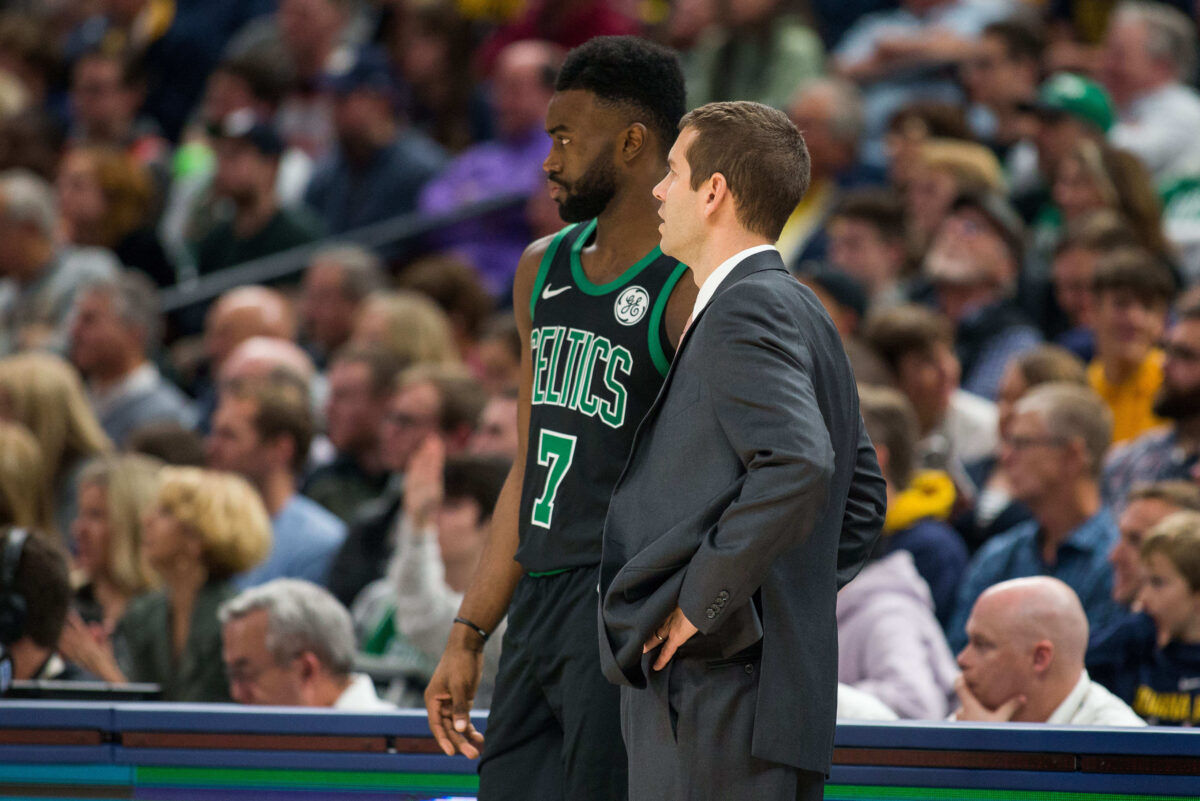 Boston Celtics star wing Jaylen Brown has been making literal waves with his unusual offseason workouts, which involve the Georgia native taking his training to the bottom of a pool in Los Angeles, California.

On a recent sports radio talk show hit on local station WEEI, Boston President of Basketball Operations Brad Stevens revealed he had been out to LA to see Brown, and brought up the unorthodox workout regimen in the process.

“You might have seen some of his pool workouts,” said Stevens of the aquatic exercise approach adopted by the former Cal-Berkeley standout. “He didn’t invite me to do that. I’ve heard they’re ridiculous.”

“One of our trainers was out there, and one of our assistant coaches went out there and tried them, and said, you don’t want any part of that — it’s the real deal,” added the Celtics executive.

Brown “looked great” in Stevens’ estimation, who spent some time sharing how he’d made the trip to the West Coast to be sure the team was on the same page as their star wing during the Kevin Durant trade rumor saga.

“He’ll be back to Boston soon,” noted the Celtics president, likely as excited to get past that aforementioned saga as the rest of us are.

Check out the “Celtics Lab” podcast on:

The range of emotions ran the gamut, but relief in some form was the dominant theme. 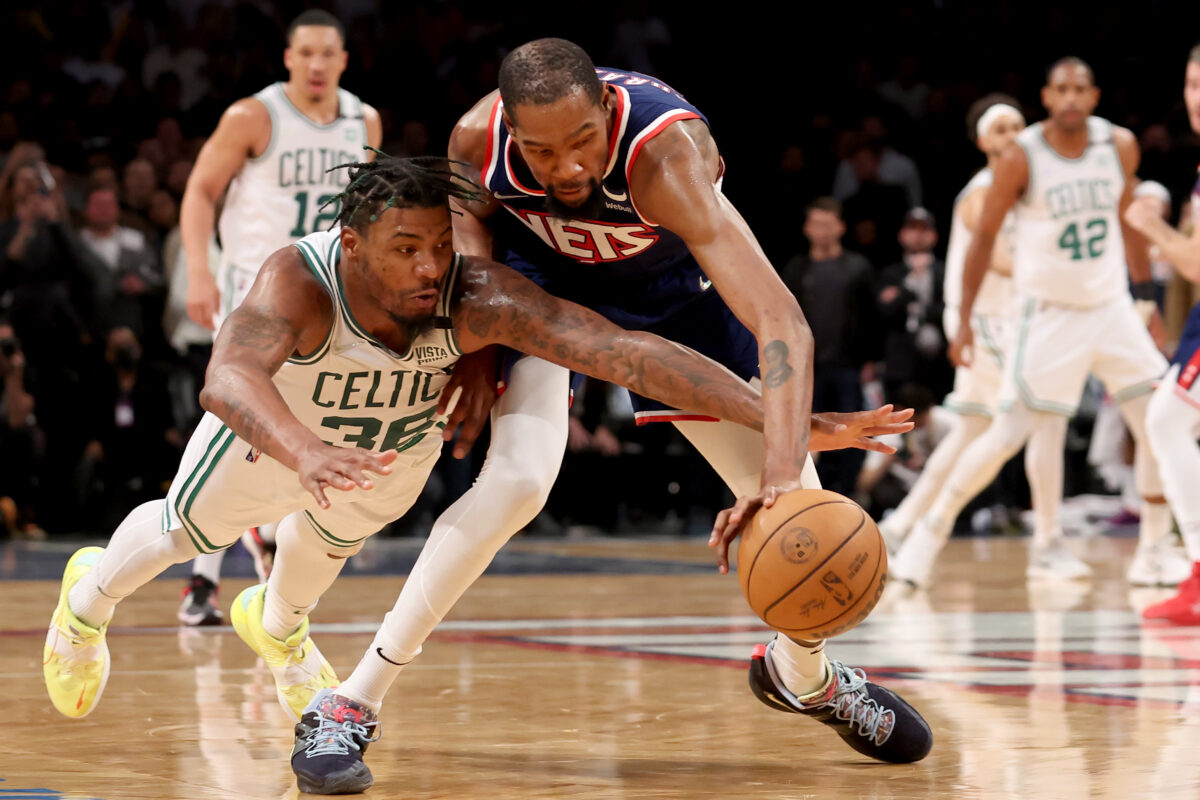 Since it began on the 30th of June, the trade request of Brooklyn Nets star forward Kevin Durant has held the NBA media sphere captive both literally and figuratively, with little other movement in the Association unconnected to where the mercurial swingman might be suiting up next season.

Fans of the Boston Celtics of course knew that better than anyone save perhaps Nets fans with their star wing Jaylen Brown a frequently-named part of trade talks of dubious seriousness and endless rounds of leaks and counter-leaks. So, on Tuesday morning, when word broke of the Nets’ statement that the two sides had reconciled, effectively bringing the Durant trade saga to an end. quite a few members of NBA and Celtics Twitter took to the league’s unofficial social media site to share their feelings on the topic.

This is what they had to say.

Boston is among the teams playing on the big holiday — did the NBA get the mix of games right? 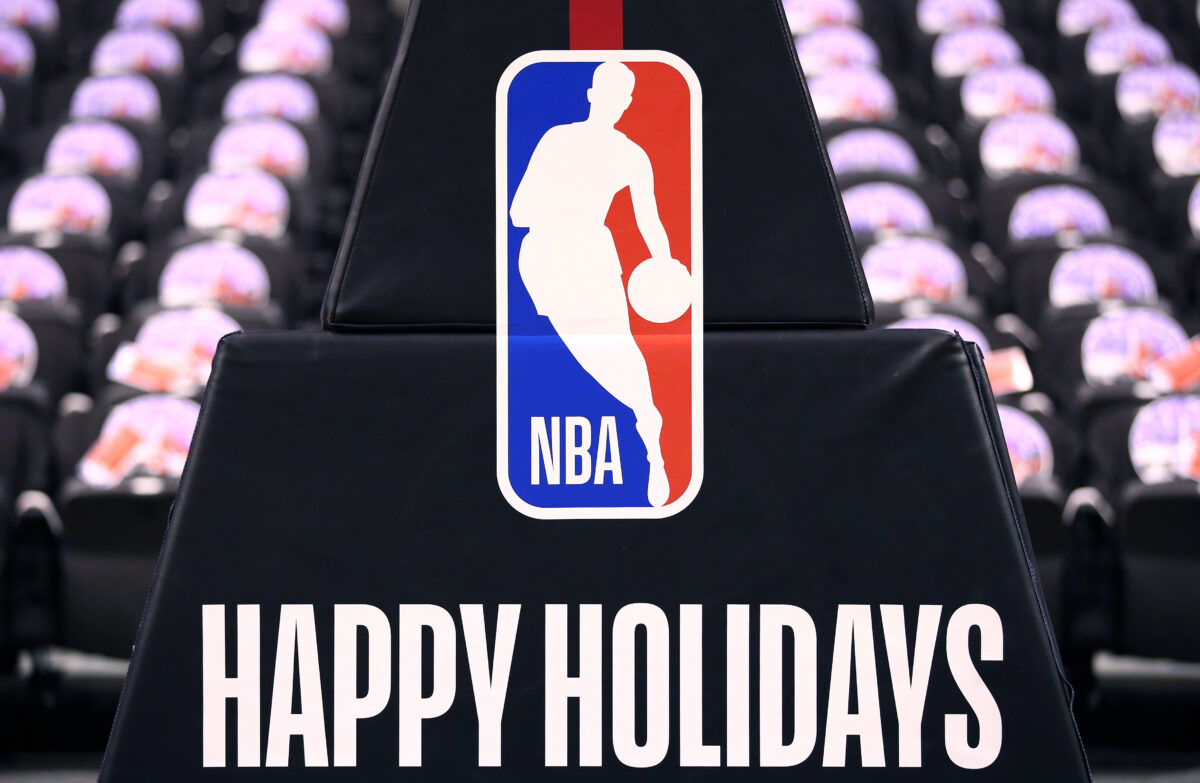 The NBA has put together a slate of five games for its 2022 Christmas Day schedule, which includes the Boston Celtics. It appears a bunch of heavy-hitters will be on the menu along with a couple of teams who are there more for their media market than for season expectations, at least as currently constructed.

The hosts of ESPN’s “NBA Today” show talked over the slate of contests scheduled for the big holiday and shared their opinions on the matchups they’d have liked to have seen instead.

Take a look at the clip embedded above to hear what they had to say.

This episode, we are joined by the New York Times’ Sopan Deb to pay homage to a giant who changed lives far beyond his legacy in the NBA. 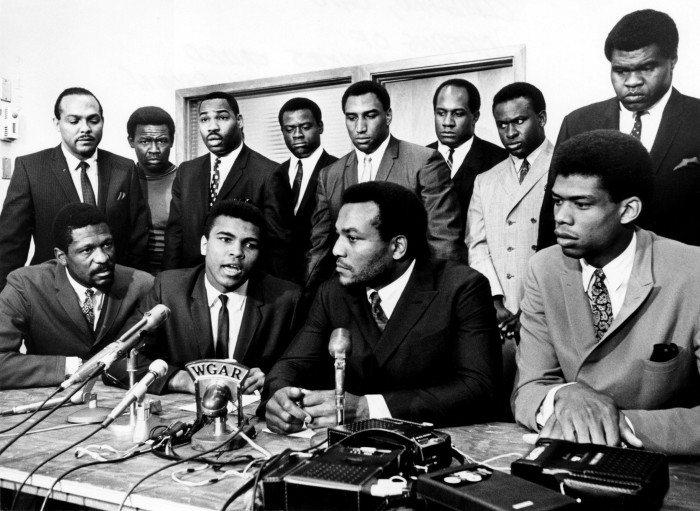 What Boston Celtics Hall of Fame big man Bill Russell did on the basketball court is unparalleled in the history of sport. He won 11 NBA championships. He helped to integrate as part of the first all-Black starting five in league history. He was its first Black superstar and first Black head coach. The countless accolades go on..

But it is easy to lose the activism, mentorship and life experience of the man while lauding the player. And perhaps more than anyone in NBA history, those qualities were inseparable.

Russell was a monumental human being who answered the call for justice at what might have been great personal expense and at great risk, and it would be a disservice to who he was to elevate his identity as a basketball player above the rest of what made him so special.

With that in mind, the hosts of the CLNS Media “Celtics Lab” podcast linked up with the New York Times’ Sopan Deb to discuss Russell’s legacy as a person and an activist, and how his uncompromising perspective has shaped the wider world of today far beyond the NBA.

Join Justin Quinn, Alex Goldberg, and Cameron Tabatabaie as they remember the Russell that inspired them in more ways than the story 11 rings can tell as we memorialize not only an NBA and Celtics great, but one of the most important figures of the last century.

Grousbeck reflected on Russell’s infectious laugh and sense of humor in remembering the Celtics giant. 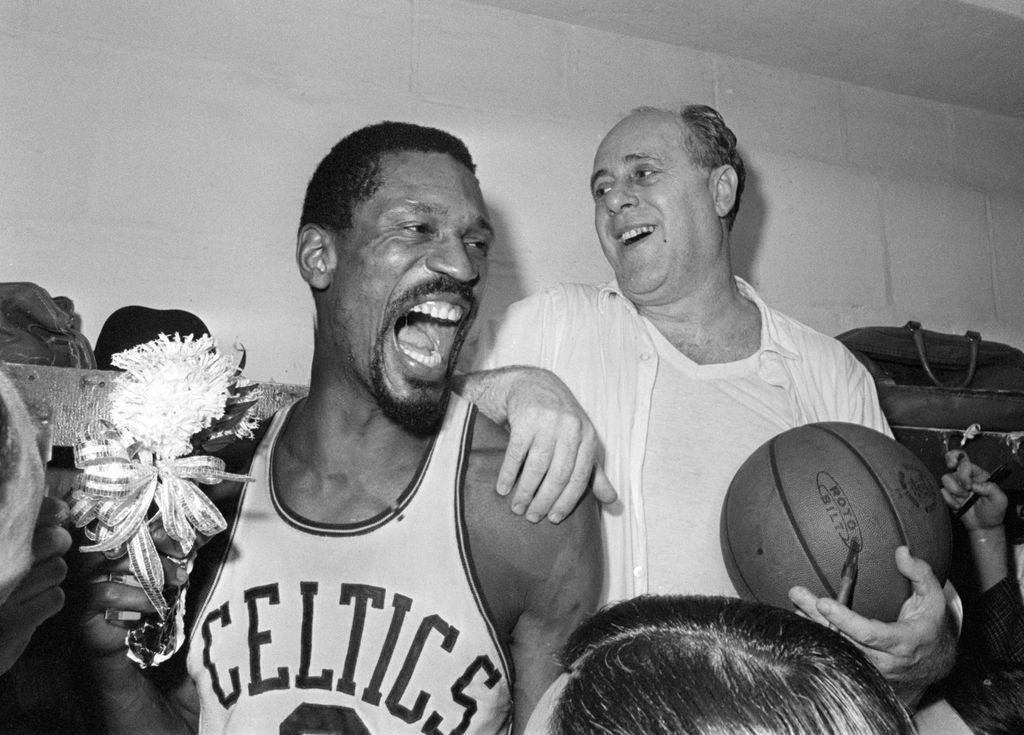 Boston Celtics majority owner Wyc Grousbeck was among the lucky who was able to work with Boston Hall of Fame big man Bill Russell in the years before he passed through their connection via the Celtics organization.

“He was all-in on everything, including laughter and having fun and poking fun and smiling and just enjoying life and trying to make things better,” shared the team governor of his experiences with Russell over the years in an interview with local TV station WCVB Channel 5 Boston that aired in the wake of news of the Celtics great’s passing on this past Sunday.

And while it is more than understandable to turn to the USF product’s legendary status in the league with his 11 titles, 13 All-Star nods, and 5 MVPs awards or his historic activism in the US Civil Rights movements of the 1960s, Grousbeck’s memory of his person is just as important.

Watch the clip embedded above for the full interview from the Celtics co-governor. 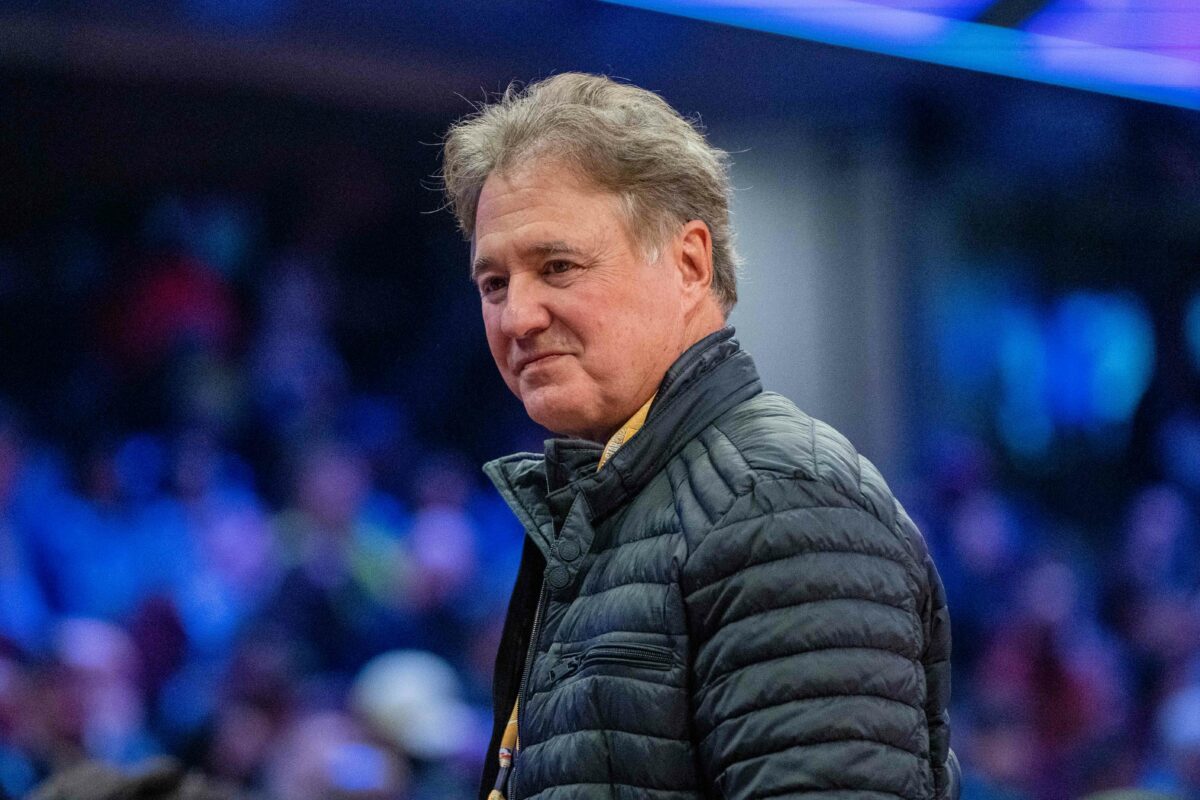 “Bill is just iconic, the best there ever was in basketball, and had a huge impact,” said Stephen Pagliuca, co-owner of the Boston Celtics, the team with whom Bill Russell won all 11 of his record NBA championships that put the Celtics on the map as one of the league’s premier franchises and established the Louisiana native as the greatest winner of all time in any of the major North American sports.

“We had the opportunity to work with him since we bought the club in 2002,” he added. “It’s been a fantastic relationship.”

Check out the clip embedded above to hear Pagliuca’s words in full on the Celtics legend’s passing, courtesy of local news station WCVB Channel 5 Boston.