Words like “embarrassing” and “ridiculous” were tossed around with reckless abandon 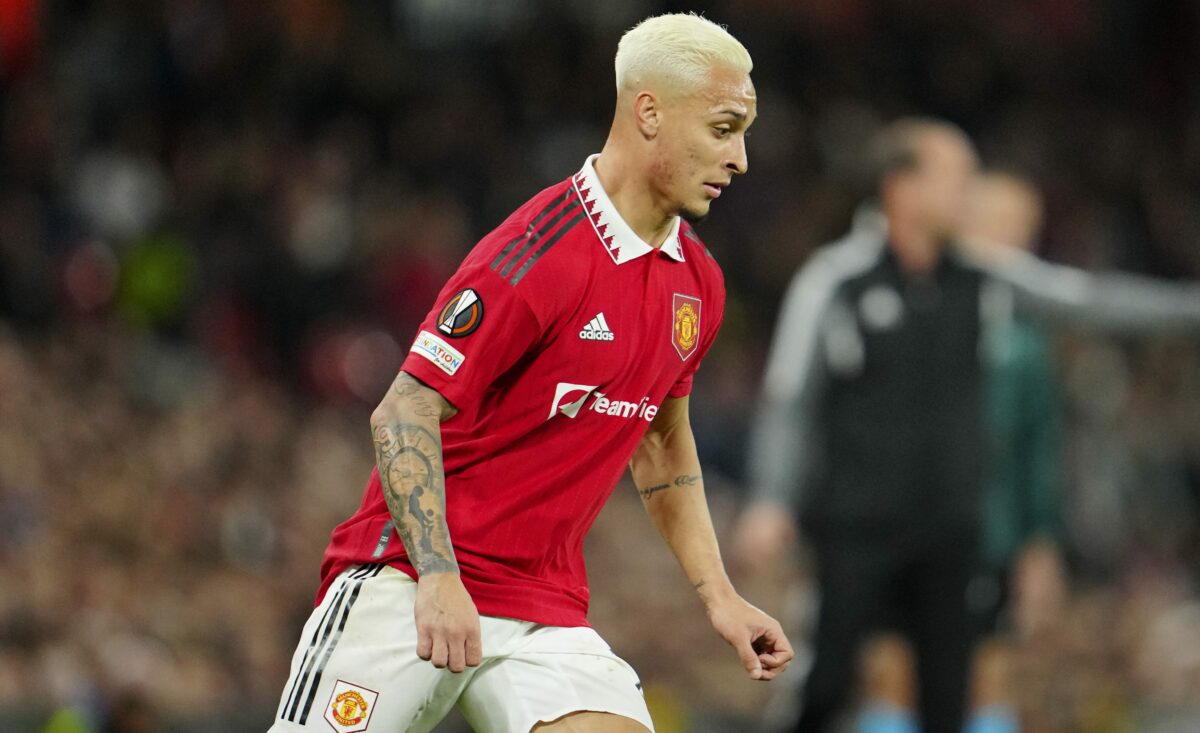 With just a couple twirls, Antony managed to set off something of a firestorm.

The Manchester United winger performed his signature move against Sheriff Tiraspol in the Europa League on Thursday, which was immediately followed by an errant pass that went out for a goal kick.

Many observers, including his manager Erik ten Hag, didn’t seem to be amused.

Antony was taken off at halftime of United’s eventual 3-0 win, with Ten Hag saying the following day that he wants his flair players to display equal parts fashion and function.

“I do not have a problem with that, as long as it is functional,” the manager said. “So from him, like everyone else, I demand more. More runs behind, being more often in the [opposition’s] box. More pressing. More dribbles against opponents. More playing in the pockets. We demand more dominance.

“Then there is a trick like that which is nice, but as long as it is functional and you do not lose the ball. Then it is OK. But it is a trick and because of the trick, I will correct him.”

Ten Hag may have been measured in his criticism, but Antony’s spin cycle caused several Man Utd legends to lose their minds.

Words like “embarrassing” and “ridiculous” were tossed out by Paul Scholes and others.

Antony, for his part, made a defiant post on Instagram, saying he wasn’t about to stop showing off the kind of skill that earned him a €95 million move to United.

Let’s check just a few of the reaction’s to the 720 heard round the world. 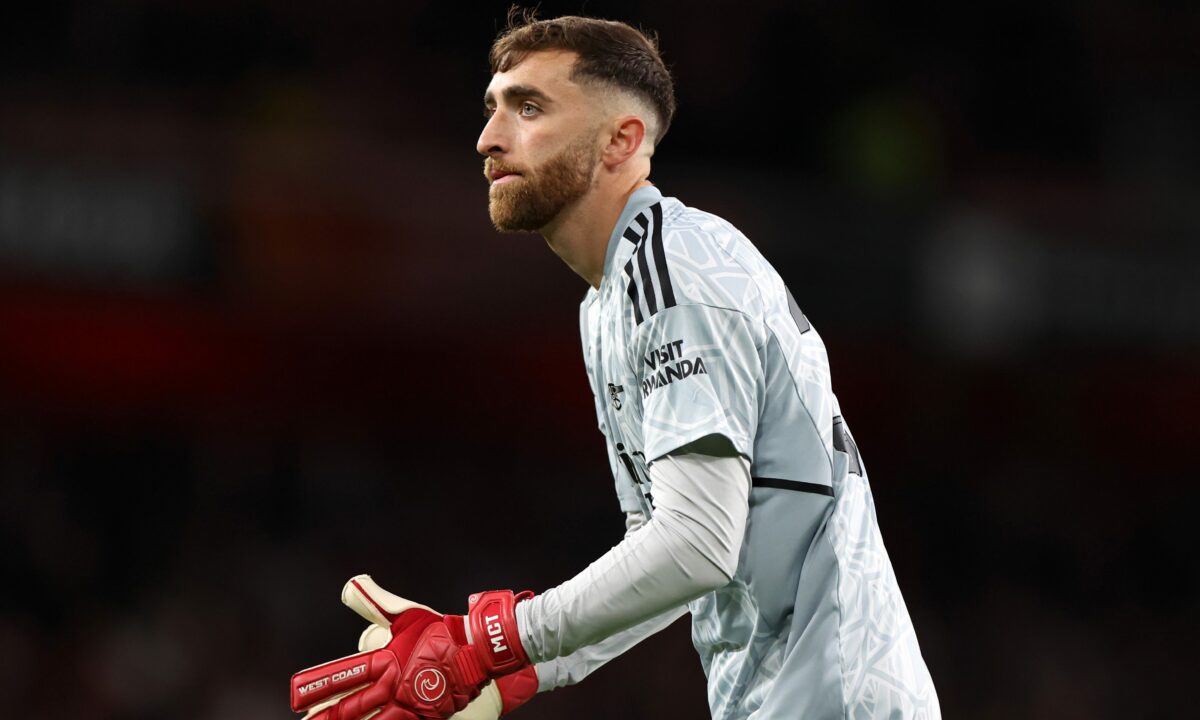 Aaron Ramsdale started the match in the Netherlands, as the Gunners’ normal top-choice keeper made his first European appearance of the season.

The Europa League has been Turner’s only chance to play for Arsenal so far this season. After moving to north London from the New England Revolution in the summer, the U.S. international has served as Ramsdale’s backup in the Premier League.

Turner has impressed in four appearances, with Arteta saying “he was phenomenal in goal” after a clean sheet earlier this month against Bodø/Glimt.

According to The Athletic, Turner’s groin injury isn’t serious and he was held out on Thursday as a precaution.

Still, missing any chance to play will be a blow to Turner, who is locked in a tight competition with Zack Steffen to be the USMNT starter at the World Cup next month.

Steffen continues to start every week for Middlesbrough, giving him an edge in playing time over Turner.

Turner would now appear to only have two chances left to play ahead of the World Cup, provided his injury is not serious: against FC Zurich in the Europa League on November 3, and against Brighton on November 9 in the Carabao Cup. 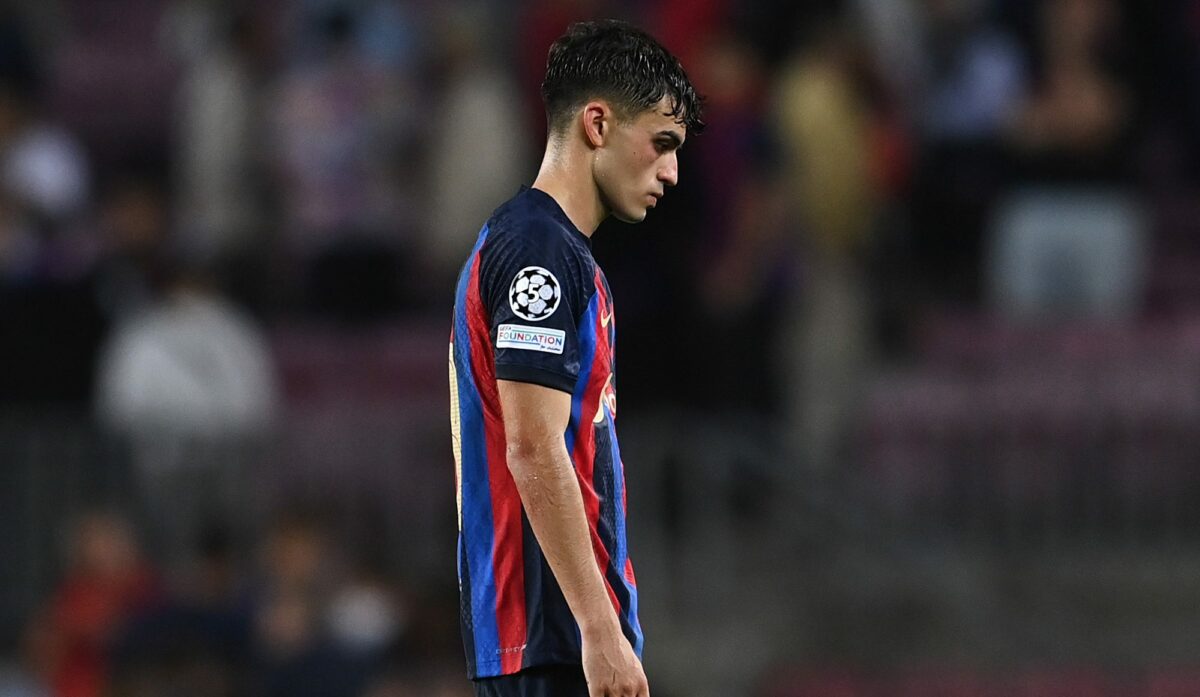 For the second straight season, Barcelona has been bounced out of the Champions League at the group stage.

After a thrilling draw with Inter two weeks ago, Barcelona needed something of a miracle on Wednesday night. To stay alive in the Champions League, Blaugrana had to hope Czech minnows Viktoria Plzeň — loser of all of its first four matches — could get a result against Inter.

It didn’t happen. Inter beat Plzeň 4-0, consigning Barcelona to the Europa League before its game against Bayern Munich even started.

Xavi’s side opened Group C with a win over Plzeň but consecutive defeats away at Bayern and Inter left them on the brink after three games.

Though Bayern and Inter were an unusually strong duo to be drawn in a group with, the result is still hugely disappointing for a Barcelona side that mortgaged its future to spend over €150 million on signings in the summer.

How costly another group-stage exit will be is still an unsettled matter that partially depends on how far the Blaugrana advance in the Europa League.

Barcelona could be set to miss out on up to €20 million in prize money, according to ESPN, but a deep run in the Europa League could partially offset some of the losses.

But this elimination is about more than money. It’s been more than 20 years since the last time Barcelona was eliminated at the Champions League group stage in consecutive seasons. For one of the giants of the European game, another failure is hard to fathom.

2 – #FCBarcelona has been eliminated of UEFA Champions League #UCL group stage in back-to-back seasons, something that had not happened since the 1997-98 and 1998-99 campaings under Louis Van Gaal. Disappointment. pic.twitter.com/GkcqNp2Ncq

There will always be a certain cache associated with Barcelona, but a summer of negative headlines over disastrous financial mismanagement followed by another high-profile failure on Europe’s biggest stage has definitely taken some of the luster away.

We bow in the presence of a true legend 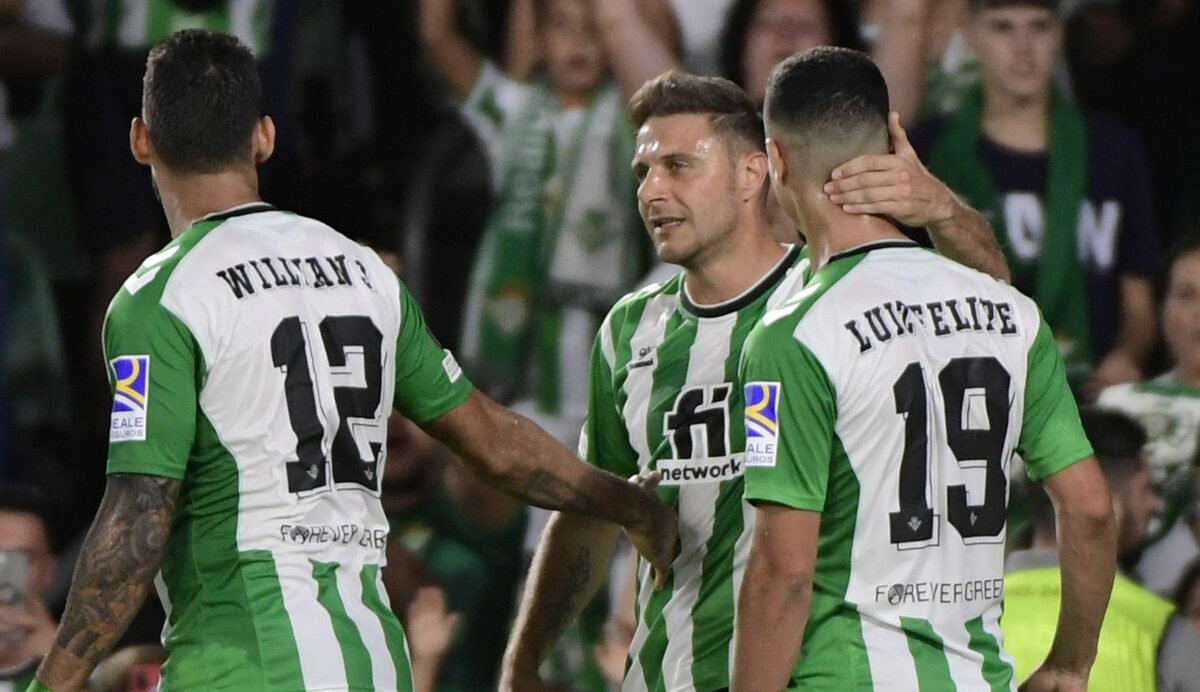 We don’t talk enough about Joaquín.

Sure, we all know about Zlatan Ibrahimović, but there is another attacking player who is even older and still doing it at a high level in a top league.

That man is 41-year-old Real Betis winger/living legend Joaquín, who is entering his 24th professional season, and still scoring golazos — as he showed on Thursday in the Europa League.

Joaquín scored a fantastic curler from the top of the box against Ludogorets, giving his side a two-goal lead in the first half.

Prior to this season, Joaquín signed a one-year renewal with Betis after he helped the club lift the Copa del Rey. It was the second time he won the competition with Real Betis, having also done so in 2004-05.

The winger has made more than 600 La Liga appearances in his career, the most ever for a field player.

We bow in the presence of a true legend.

A STUNNER FROM THE BETIS LEGEND. 🟢 pic.twitter.com/cfuqmCtQ5r 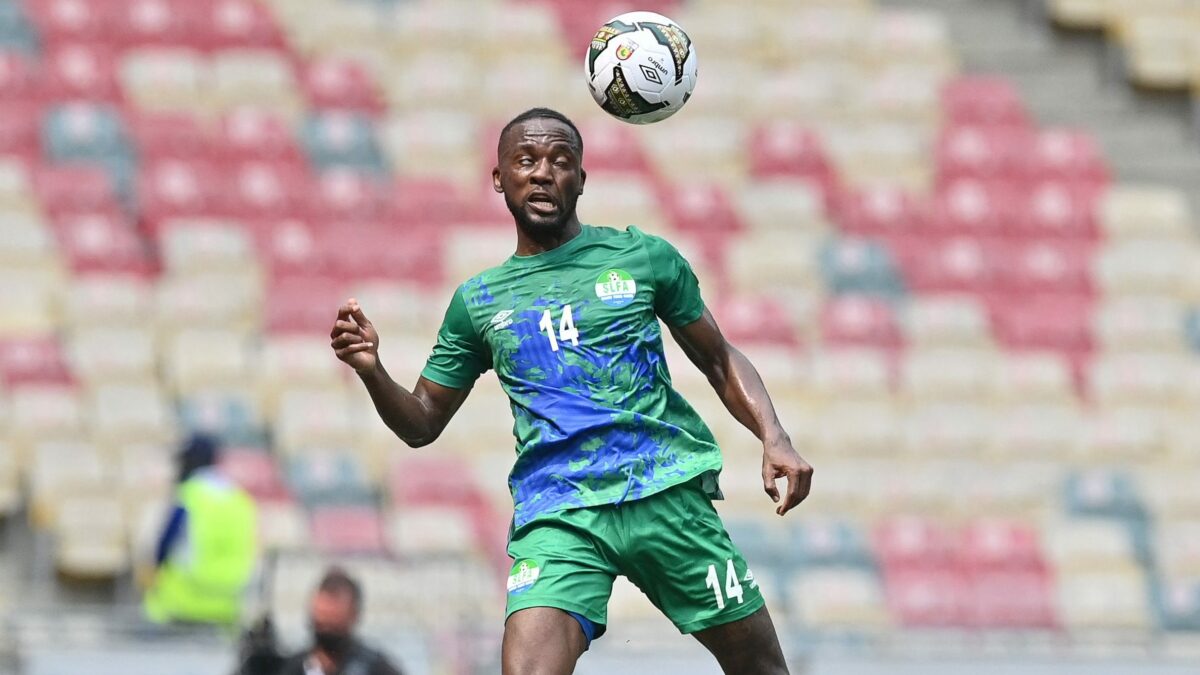 Mohamed Buya Turay has become the new standard-bearer for the phrase “take one for the team.”

The Malmö forward confirmed he missed his own wedding in order to report to his new team in time for Thursday’s Europa League qualifier against Diddeleng.

Malmö announced the transfer of Turay last month, as the Sierre Leone international joined from Chinese side Henan Songshan Longmen.

After coming off the bench for his side’s 3-0 win over Diddeleng, Turay revealed that his new club made a … rather big request.

“We got married on July 21 in Sierra Leone,” Turay told Aftonbladet. “But I wasn’t there because Malmö asked me to come here earlier.”

Turay posted pictures of what appeared to be him at his wedding, but said that they were taken in advance and, in fact, his brother had to stand in for him at the actual ceremony.

🌟🐐🦁🇸🇱 I married my sweetheart, wife and my Best friend today!!! What an amazing human being!!! And What a blessing!!! Mrs SBT💞💍 Suad Baydoun

I can’t wait to enjoy life with you together soboti 😃🤦🏾‍♂️. pic.twitter.com/nEw4siV0QF

“We took the pictures in advance. So it looks like I was there but I wasn’t. My brother had to represent me at the wedding itself,” Turay said.

“But I will try to get her to Sweden and Malmö now so she can be close to me. She will live here with me.”

Dedication, insanity, or maybe both? At least Turay said he will be present at his own honeymoon – and hopefully celebrating a league title.

Asked if he’ll go on a honeymoon in December, he replied with a laugh: “Yes, first we have to win the league and then I go on my honeymoon.”

150,000 fans and plenty of cold beer? Spanish police think it might be a recipe for trouble. 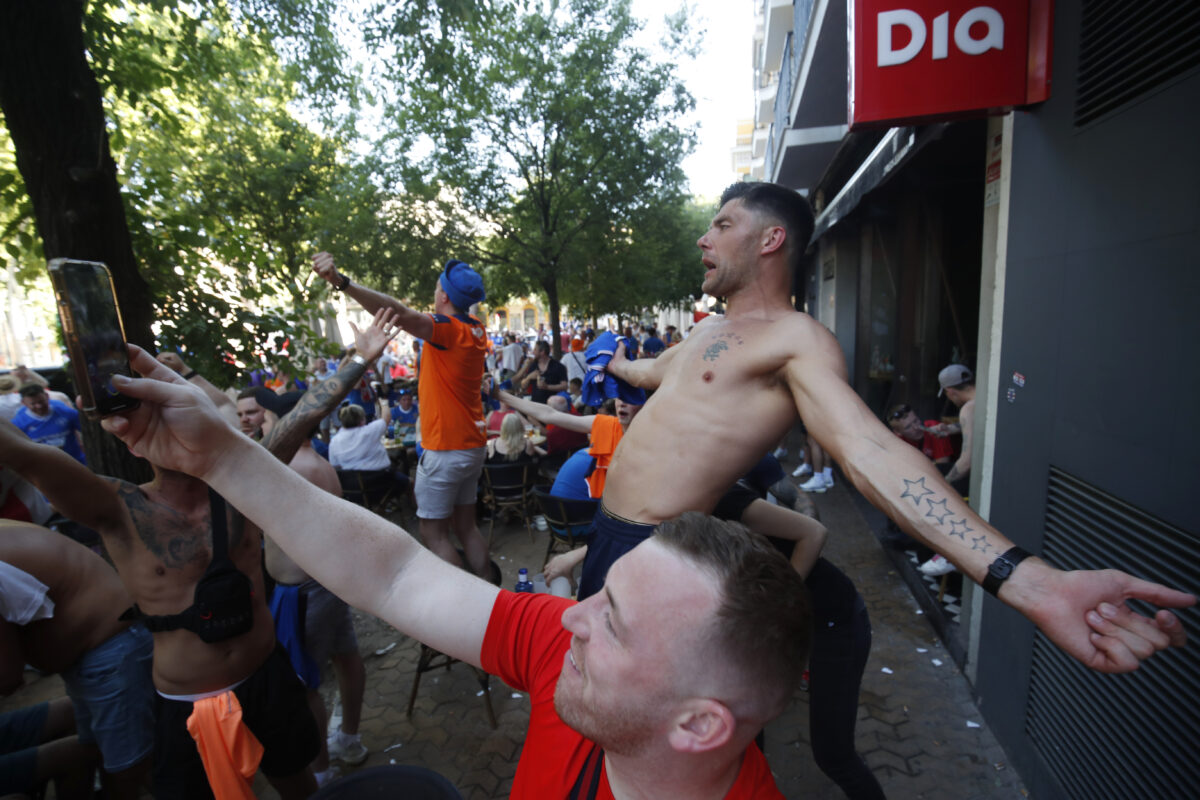 Rangers and Eintracht Frankfurt fans have swarmed Seville ahead of Wednesday’s Europa League final, and Spanish police are expecting them to do plenty of drinking.

“We will host two fanbases that drink a lot. These citizens, who are used to drinking warm beer in their countries, when they find our fresh and cold beers, will drink even more,” said Castro, adding that between the alcohol, the sheer volume of fans who will not have tickets—the Ramón Sánchez Pizjuán only seats 42,714—and construction in the area, it could be “a recipe that could lead to serious problems.”

Spanish police may still be a bit bewildered at how many Eintracht Frankfurt fans ended up in the Camp Nou in the quarterfinal. The German club was allotted 5,000 tickets for its second leg against Barcelona, only for a much higher number of fans in white and black to fill the stands.

UEFA has allotted both clubs 10,000 tickets to the match, and police have said they plan to keep the two sets of fans over five kilometers apart before the game, but Castro admitted there is still uncertainty. “We can’t know for sure how many will arrive by car, buses and boats. Eintracht only had 5,000 tickets to their quarterfinal at Barcelona and 30,000 showed up somehow at Camp Nou.”

As a result, security plans call for roughly 5,000 members of Spanish security forces, drawing from national and local branches, to set up in Seville. They’ve also kept tabs on how fans are arriving in Spain, detailing the prospect of fans traveling to Spanish vacation spots like Malaga, Mallorca or the Canary Islands before descending on Seville for the match.