“If he can’t get past du Plessis, it might be over for the time being for Till.” 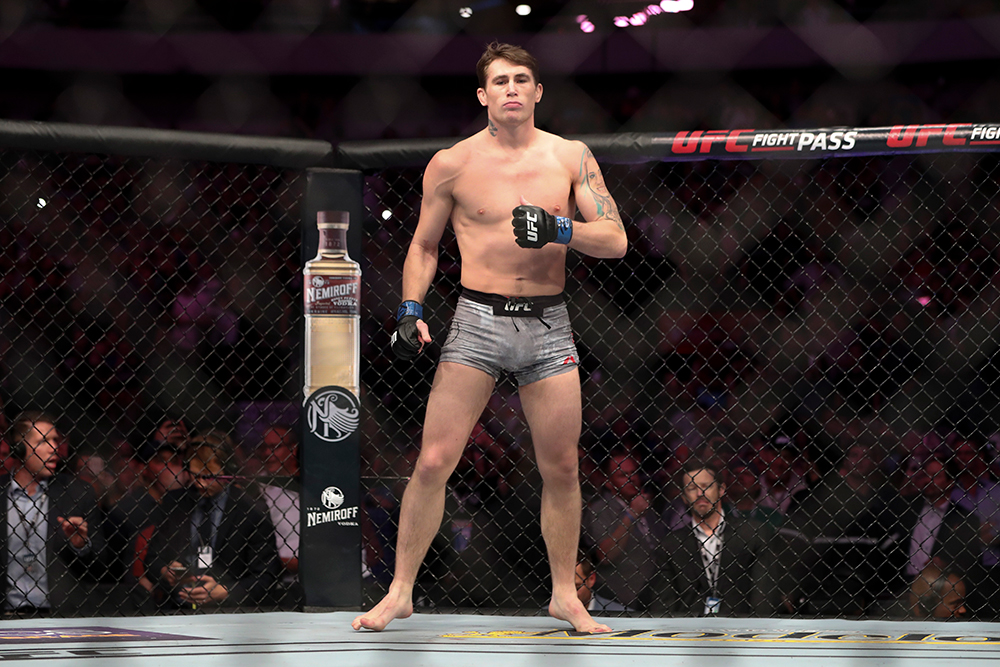 [autotag]Daniel Cormier[/autotag] thinks UFC 282 is a must win for [autotag]Darren Till[/autotag] if he wants to stay relevant in the title picture.

Till has lost four of his past five, but the setbacks have come to top-level competition. However, if Till loses to rising contender Du Plessis, Cormier sees it as a major setback.

“It’s not like Darren Till hasn’t fought really high-level competition well,” Cormier said on his “DC & RC” ESPN show. “Darren Till was at one point fighting for the welterweight championship of the world, went up to 185, fought Robert Whittaker in a very competitive fight, and we know how good Robert Whittaker is, but we need to see consistency.”

He continued, “The one thing about Till is, he’s very popular. People still recognize him and honestly, before Leon Edwards became the champ, Till was still the most popular English fighter because he’s recognizable and he’s got a big personality. He’s a character, but the reality is, the character only gets you so far. You’ve got to win fights.”

Till has tried to make some changes by training with unbeaten star Khamzat Chimaev at Allstars Training Center in Sweden. In Du Plessis, Till faces a dangerous finisher and Cormier thinks he needs to have a standout performance to gain his momentum back.

“Darren Till’s got that skillset, he’s training out of Sweden now with those guys like Khamzat and Andreas Michael and the whole team at Allstars MMA,” Cormier added. “He has to implement what they teach and has to do it in a way that reminds everyone who Darren Till is and was between 170 and 185. He’s still young enough to make another run towards a championship opportunity. But it all starts Saturday, and if he can’t get past Du Plessis, it might be over for the time being for Till, but it would skyrocket Dricus up the rankings into very, very important fights.”

For more on the card, visit MMA Junkie’s event hub for UFC 282.

Check out the results from the official UFC 282 fighter weigh-ins in Las Vegas.

The full UFC 282 weigh-in results include:

Check out a live video stream of the UFC 282 ceremonial weigh-ins from Las Vegas. 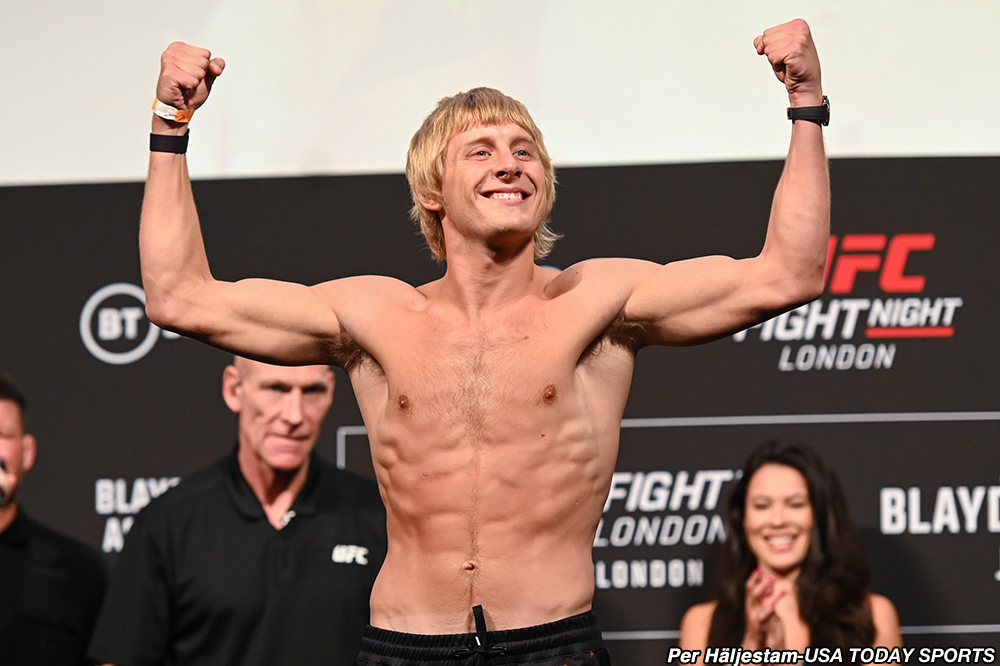 The weigh-ins take place at MGM Grand Garden Arena in Las Vegas. The nearby T-Mobile Arena hosts Saturday’s event, which has a main card on pay-per-view following prelims on ESPN2 and early prelims on ESPN+.

In addition to the video stream above, you can check out the early and official UFC 282 weigh-in results from earlier in the day.

The 14th annual World MMA Awards take place Thursday in Las Vegas, and MMA Junkie will be on-site with a live blog. 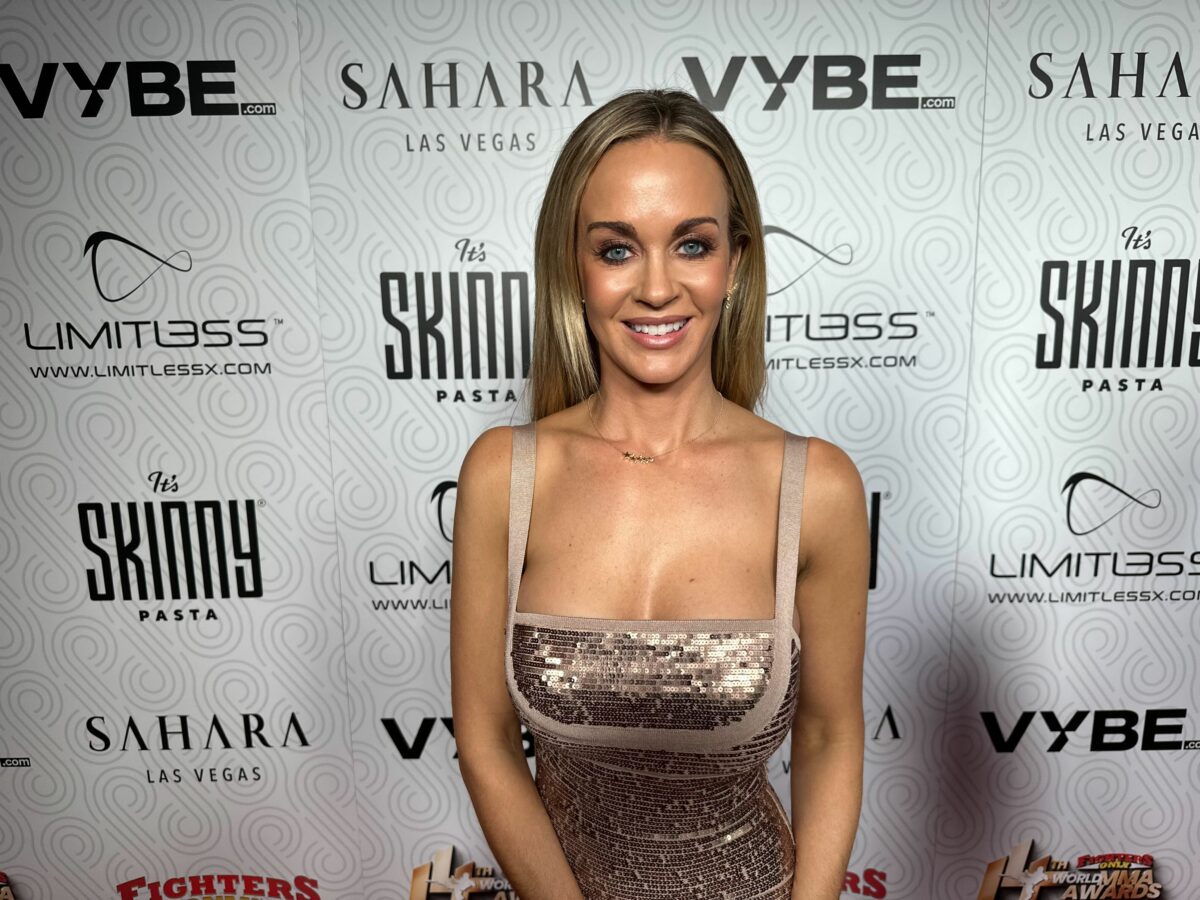 Check out our live blog and results of the night’s winners, including Fighter of the Year, Coach of the Year, Promotion of the Year and much more.

MMA Junkie was nominated for Media Source of the Year, while senior reporter Mike Bohn is up for Journalist of the Year.

Check out the results below as well as other notes from MMA Junkie’s on-site coverage of the event.

“You’ll do nothing, you little fart,” Paddy Pimblett yelled at Ilia Topuria as UFC security intervened. 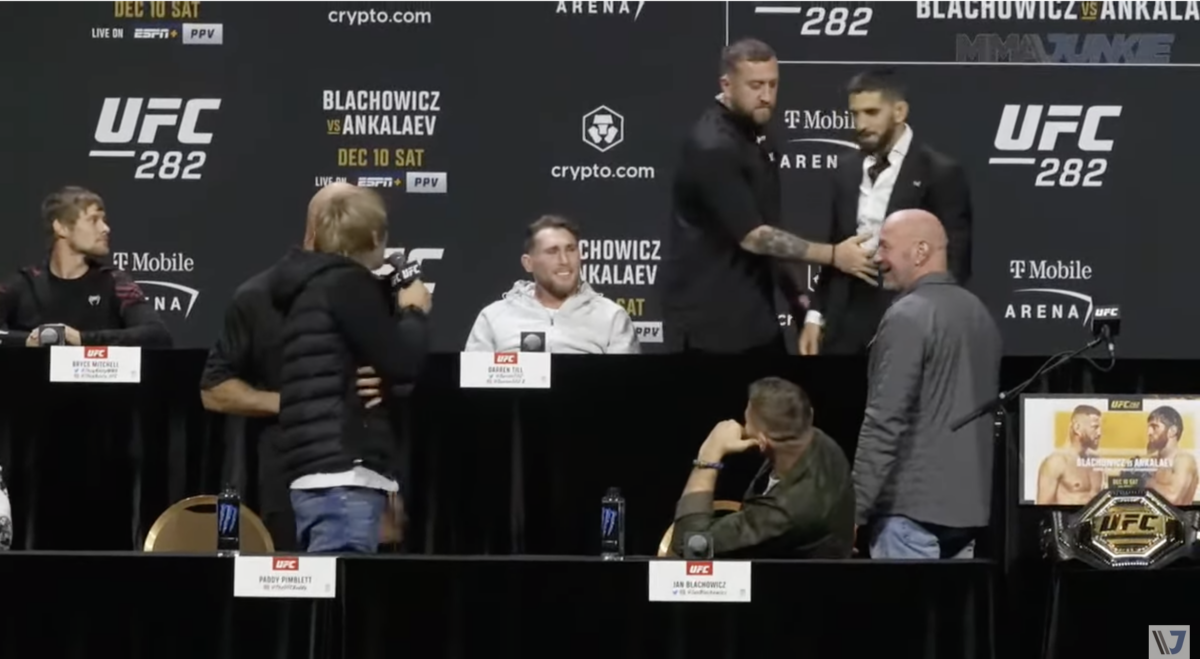 LAS VEGAS – [autotag]Paddy Pimblett[/autotag] and [autotag]Ilia Topuria[/autotag] have a long history of bad blood, and another chapter was written Thursday at a UFC 282 pre-fight news conference.

The spat began when Topuria interrupted Pimblett’s opponent Jared Gordon, during a correction about past comments that Pimblett was a quitter.

The insults began to hurl. Pimblett called out Topuria’s representation of multiple countries. Topuria, meanwhile, swore at Pimblett in both English and Spanish.

At one point Pimblett invited Topuria to “do it then, you little fart.” Topuria half-heartedly took him up on his offer, as he got up and walked toward Pimblett before UFC security intervened.

Check out the full argument and altercation in the video above. 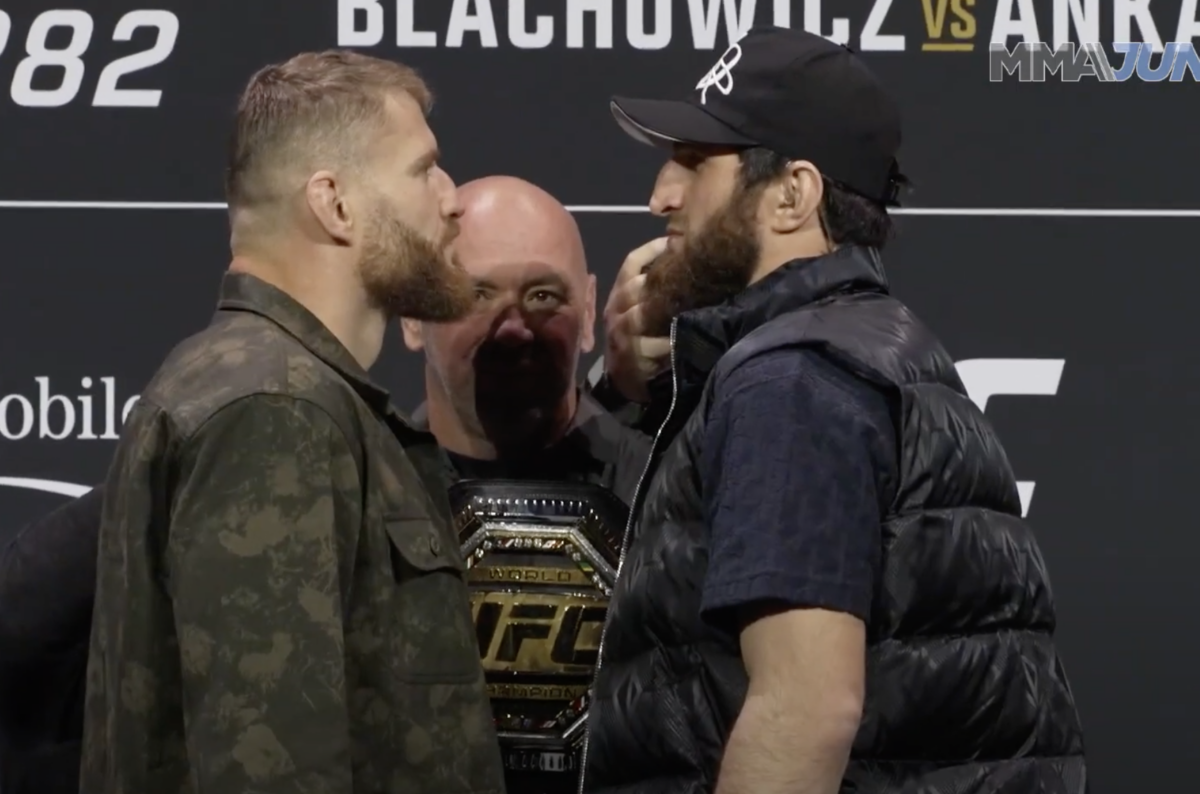 LAS VEGAS – The days are winding down until a new UFC light heavyweight champion is crowned, and as the UFC 282 headliner approaches, [autotag]Jan Blachowicz[/autotag] and [autotag]Magomed Ankalaev[/autotag] finally had their first staredown.

Both men were respectful as they came face-to-face, and you can watch the video above.

Blachowicz and Ankalaev are fighting for vacant gold after Jiri Prochazka suffered a serious should injury that forced him to relinquish the strap. It’s expected he will get a title shot once healthy, but for now, he’s forced to watch two others compete for gold.

The non-title fights on the UFC 282 main card came face-to-face for staredowns at Thursday’s pre-fight press conference, including Paddy Pimblett vs. Jared Gordon. 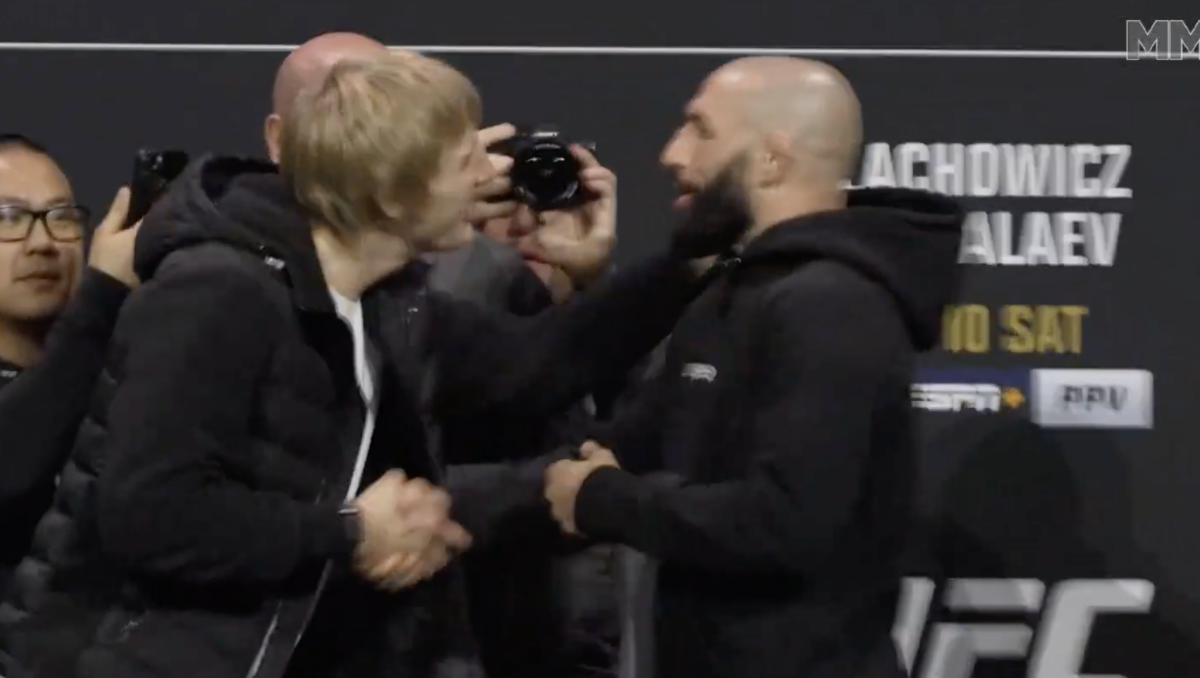 LAS VEGAS – The UFC 282 pre-fight news conference took place Thursday and the final five matchups on the card were in attendance to answer questions.

At the conclusion of the festivities, the entire main card, which airs on pay-per-view, and the featured prelims, which air on ESPN2 and ESPN+, participated in some traditional staredowns.

The staredowns featured a range of emotions. Watch the video of the four non-title faceoffs above.

Check out the UFC’s official schedule for the first quarter of 2023 including new locations and venues. 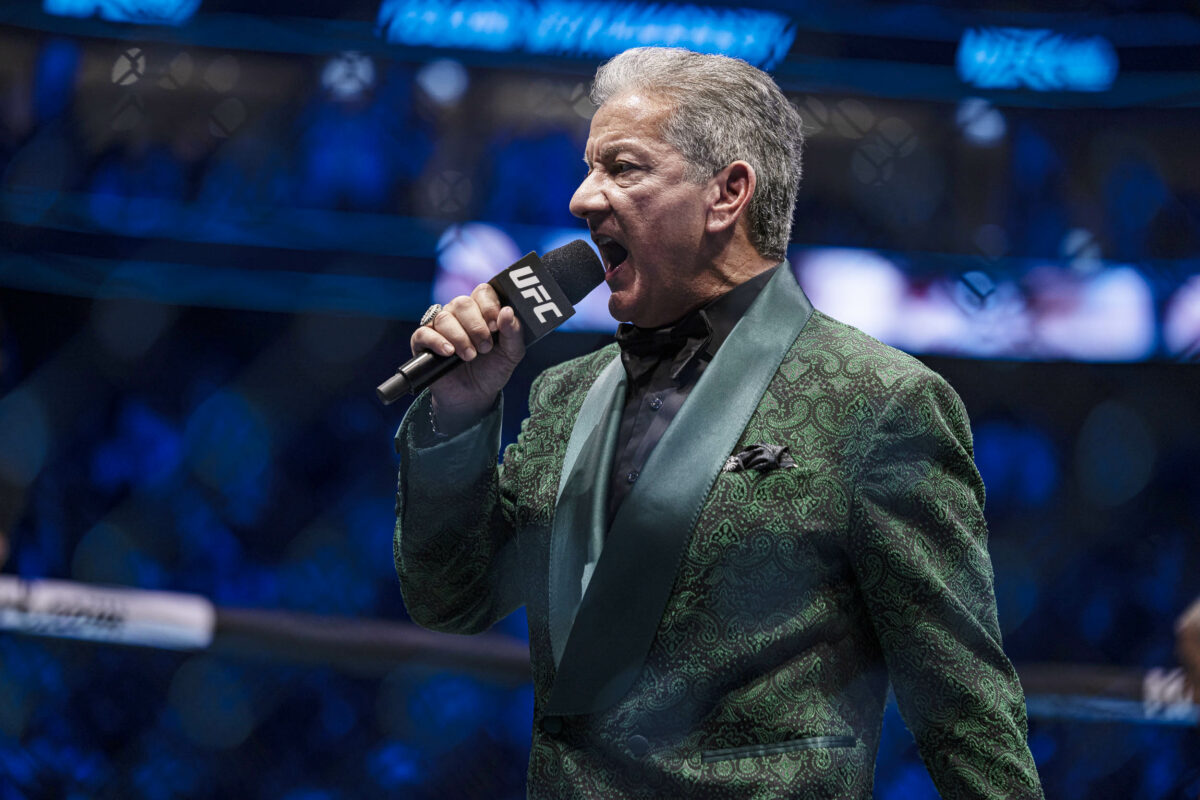 With only two events left in the calendar year, the UFC is setting its sights on 2023.

At the UFC 282 pre-fight news conference Thursday, the promotion announced its first-quarter schedule in a video highlight package.

The list confirmed many of the previously-reported events, but it also revealed a handful of locations and venues that were not announced prior.

One previously reported card was also noticeably missing from the lineup.

Scroll below to see the UFC’s official 2023 Quarter 1 schedule: 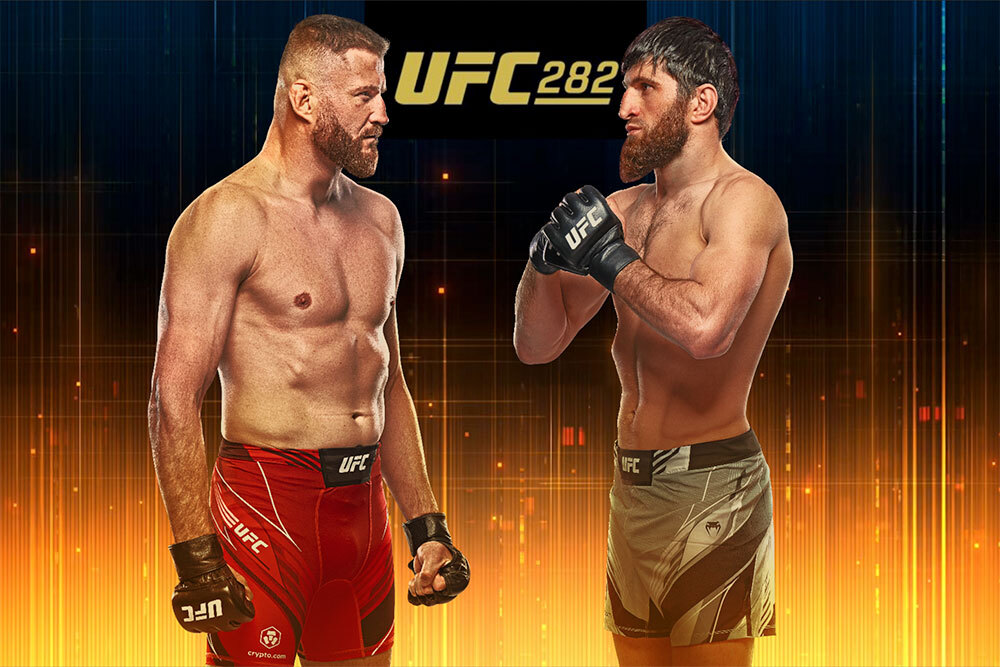 MMA Junkie analyst Dan Tom breaks down the UFC’s top bouts. Today, we look at the main event for UFC 282.

Darren Till isn’t sure if Israel Adesanya can get past the challenge of beating Alex Pereira. 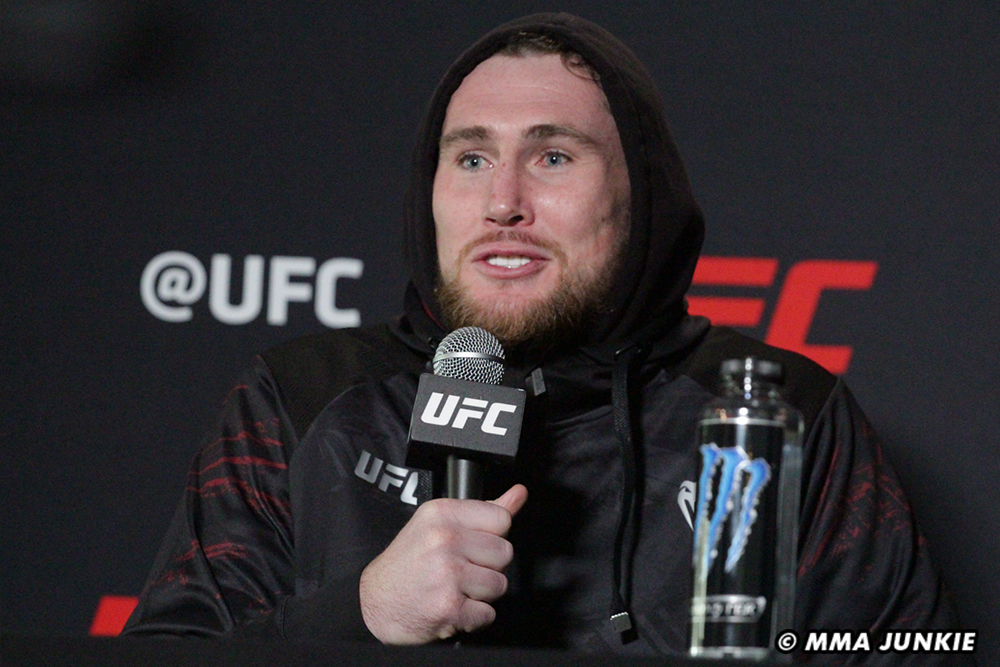 Pereira (7-1 MMA, 4-0 UFC) dethroned Adesanya (23-2 MMA, 12-2 UFC) with a come-from-behind TKO in Round 5 at UFC 281 to capture the middleweight title. The win marked the third time Pereira has defeated Adesanya, with the other two times coming in kickboxing.

But in Pereira’s past two wins over Adesanya, he was losing the fight up until he rallied to score the finish. Even though Till acknowledges that Adesanya showed he has the tools to beat Pereira, he would still side with the Brazilian if they fought for a fourth time.

“I’ve watched all three fights and the two fights he (Adesanya) was just absolutely winning comfortably,” Till told MMA Junkie. “Alex all three times just seems to from somewhere, I don’t know what it is whether he’s got Izzy’s number or what, gets the win and it’s quite terrifying for Izzy because can Izzy beat him? We’ve seen he can – well he can’t because the fifth Alex got it back.”

He continued, “Is a fourth fight worth it? Yeah, you have to because Izzy was the champ for a long time and he was dominant, but Alex has beat him three times and it’s not like a wrestler vs. a striker. They’re both strikers. It’s very tough. I know I’ve lost a fight here and there but if you lose four fights to the same person… I think the fourth fight is warranted but at this point do I see Izzy beating Pereira? For some reason, because Pereira’s won the three fights, no I don’t.”

Adesanya has long expressed interest in fighting Till (18-4 MMA, 6-4-1 UFC), but Till is yet to score the signature win he needs at middleweight to catapult him to title contention. Although Adesanya is no longer champion, Till is still interested in the matchup.

“It’s a fight that’s got to happen because I know he wants to fight for one reason, he wants to test my type of striking against his,” Till said. “I’ve always known that because he’s seen the type of striker I am and I’ve seen the type of striker he is, like phenomenal, but we’ll just see. But I think with Pereira now having the title a lot of things are gonna change up because if Izzy doesn’t get the title back, there’s a lot of people there to take it.”

Till will look to get back to the win column when he faces Dricus Du Plessis in Saturday’s UFC 282 event at T-Mobile Arena in Las Vegas. The main card airs on pay-per-view following prelims on ESPN2 and early prelims on ESPN+.

For more on the card, visit MMA Junkie’s event hub for UFC 282.