Like many, South Carolina’s Paula Roussin-Bouchard is struggling with finding the sweet spot between doing well and soaking up the event. 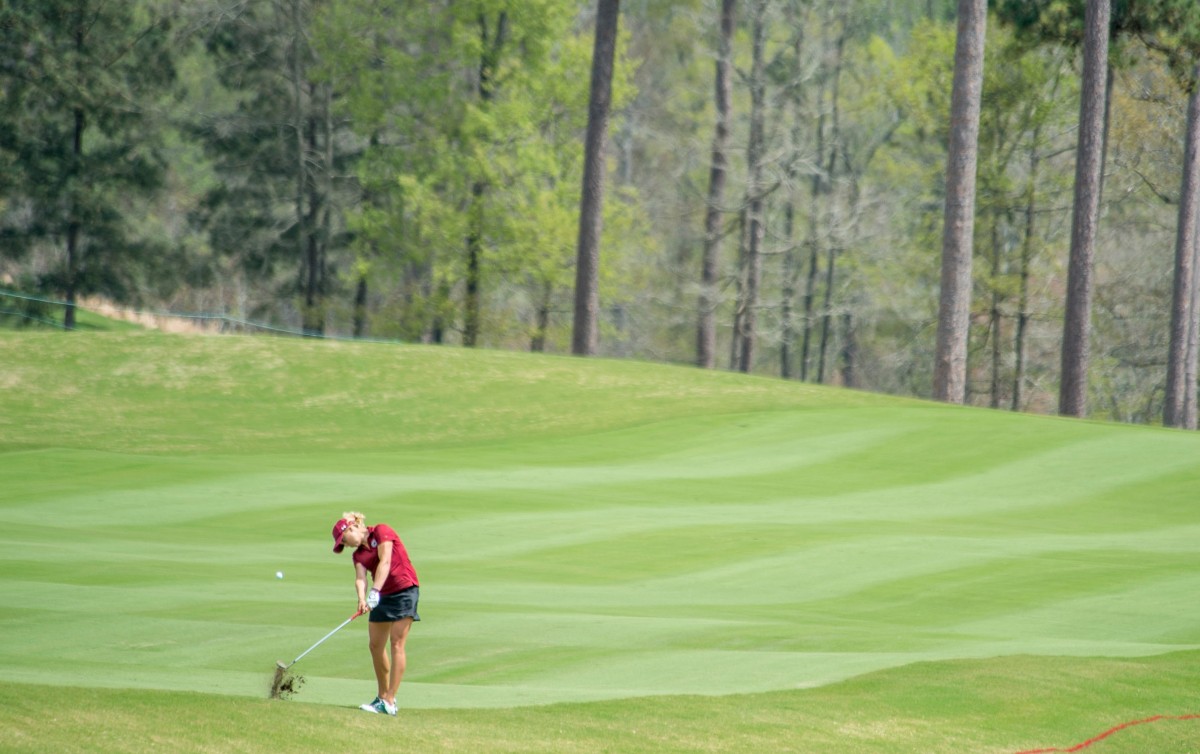 Pauline Roussin-Bouchard’s first round at Champions Retreat didn’t end the way she wanted, but she’s still very much in the running for the Augusta National Women’s Amateur title.

The 20-year-old carded a 3-over-par 75 on Tuesday, struggling with the wind all day. She uncharacteristically finished 2-over on par-5s, but also struggled getting putts to drop.

“It was a tough day for me. I handled the par-5s really, really badly. I left a couple shots (on the table) and it was really tough out there with the wind, so I enjoyed playing but it’s a little bit frustrating to end with a bogey on a par-5,” she said. “I hit a lot of good shots and I didn’t hole any putts. I only had one birdie and then had a couple that were really close, and none of them went in. I guess these greens are very, very difficult and with the wind, it was even more difficult. That’s the reason why there are no very low scores.”

Roussin-Bouchard has more length to her game than most in the field. She added she went for the green in two on all except No. 9, because she missed her drive. The mix of windy conditions and firm greens Wednesday was tough on most of the field.

Like many, she’s struggling with finding the sweet spot between wanting to do well and soak in all this event has to offer.

“I’ve been struggling thinking about how I want to do well in the tournament, but at the same time wanting to enjoy it,” she said. “There is so much more than the game of golf right now. There’s friendship, being in Augusta and it’s all part of a long journey and I have to stay patient. Sometimes that’s hard to see.”

Luckily for Roussin-Bouchard, she’s not in it alone.

The University of South Carolina has the second-highest representation with four in the field (USC has six). Roussin-Bouchard is joined by her teammates Paula Kirner, Pimnipa Panthong and Ana Palaez Trivino. That news is hardly a surprise, as the Gamecocks sit atop Golfweek’s Women’s Team Collegiate Rankings.

She just missed qualifying for the 2019 ANWA, improving her world ranking just days after the cutoff date. She was No. 4 in the world at this time last year and continues to improve the finer details in her game. She pointed to the mental aspect of her game as the one that grew the most.

“During the last two years it was about working on my behavior and handling my emotions. I’m still struggling sometimes through some mental mistakes. At some point you grow up a little bit and it allows you have a different perspective on the mental aspect of golf,” she said. “Sometimes it can give you a little more pressure and sometimes I would get too mad. I would keep losing shots instead of limiting to pars, or sometimes bogeys when necessary.”

This week was a year in the making for Roussin-Bouchard. When the sports world shut down, she found herself quarantining at her home in France.

“It was pretty hard because everything got canceled at the same time. We went from having a full season of golf and suddenly, nothing. I had to go back to France, so it was a little bit sudden.”

What a difference a year makes. Roussin-Bouchard helped lead South Carolina to a No. 1 ranking and made her first start in the premier women’s amateur golf tournament. Just shots off the lead heading into the second round, she’s not done yet.

The tournament continues Thursday after the first round was suspended for inclement weather late Wednesday afternoon.