Take a look back at Bucs LB Shaquil Barrett mic’d up during Week 5’s game against the New Orleans Saints last year. 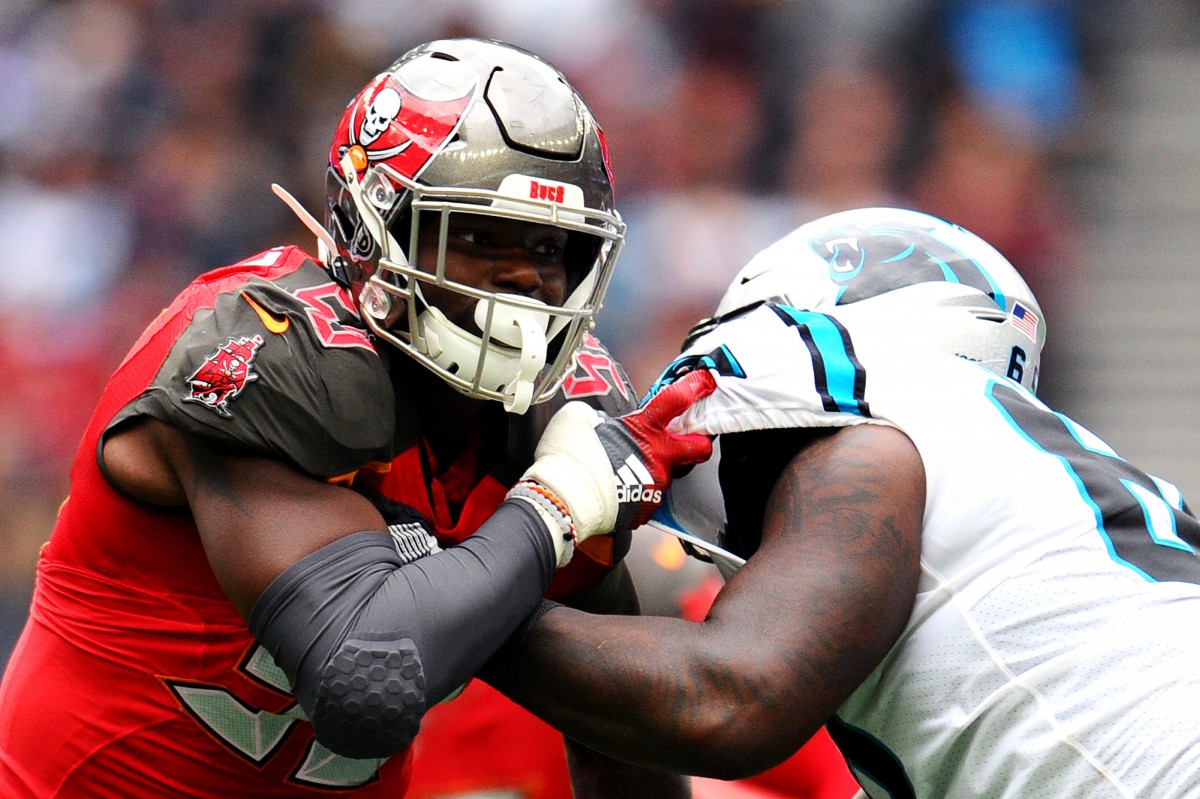 Tampa Bay Buccaneers linebacker Shaq Barrett said earlier this week that he’d sign his franchise tag tender and play out with 2020 season if he and the Bucs couldn’t come to terms on a long-term deal by the July 15 deadline.

Barrett had a monster 2019, leading the league in sacks with 19.5 and establishing himself as one of the stars of this Tampa Bay defense. Not bad for a guy who had a total of 14.0 sacks during his five years with the Denver Broncos.

As a celebration for Barrett’s impending return to the team this season for the Bucs, here’s a flashback to the mic’d up linebacker during Week 5’s game against the New Orleans Saints last year.

Take a look back to Week 11 of the 2014 season, when then-Patriots tight end Rob Gronkowski rolled through the Colts for a score.

Gronk is coming out of retirement to join the Bucs, who traded for the future Hall of Fame tight end days before the NFL draft. Gronkowski will join a group of tight ends that includes O.J. Howard and Cameron Brate. Couple that with receivers Mike Evans and Chris Godwin, and it could be a historic year for this offense.

Since Gronk has been out of football awhile, you may have forgotten just how dominant this guy is. In honor of his birthday week and Flashback Friday, let’s take a look back to the Patriots’ Week 11 win over the Indianapolis Colts in 2014, when Gronk shimmied his way to the end zone on a 26-yard score.

That score also led to this fantastic dance. 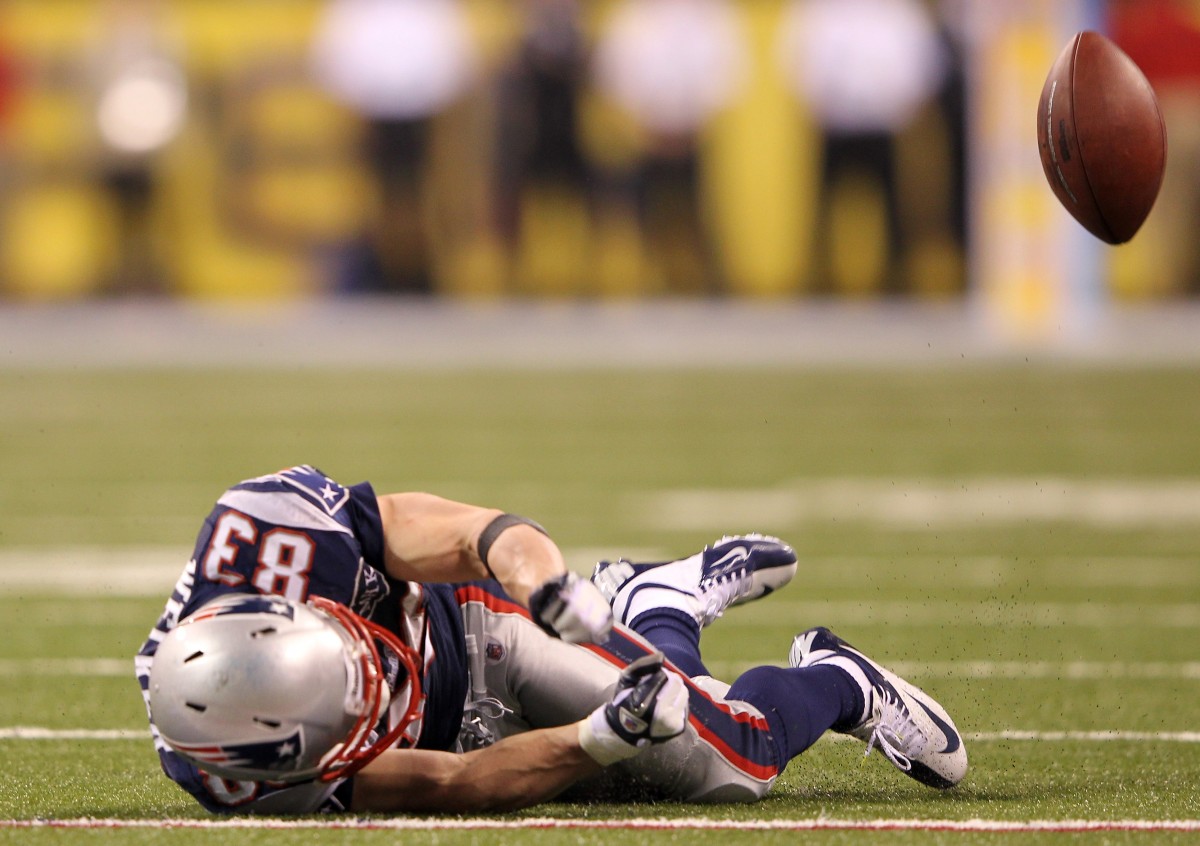 Next season, Tom Brady will be looking to win his seventh Super Bowl title when he takes the field as the new quarterback of the Tampa Bay Buccaneers.

Brady ended his historic 20-year run with the New England Patriots this offseason, opting instead to end his NFL career with another team. Brady led the Patriots to nine Super Bowl appearances, including six wins, during his time in New England, but, he could’ve easily had seven Super Bowl titles were it not for an ill-timed dropped pass by former Patriots wide receiver Wes Welker in the fourth quarter of Super Bowl XLVI against the New York Giants.

Leading 17-15 late in the fourth, New England was driving down the field, looking to put the game away. On second down at the Giants’ 44-yard line, with 4:06 remaining, Brady looked deep to Welker, who was wide open down field.

Welker inexplicably dropped the pass, which would’ve given the Patriots a first down in the Giants’ red zone with time winding down. New England could’ve gone for the touchdown score or run the clock down and kicked a field goal, but the drop eventually forced the Pats to punt. The Giants would score a game-winning touchdown on the ensuing drive, crushing Brady’s chance at ring number four.

While Brady made up for that loss by winning three more Super Bowls down the road, there’s no question that loss to the Giants stings. It was New England’s first trip back to the big game since their undefeated regular season in 2007. They lost Super Bowl XLII back then to the same Giants, crushing their chance at an 18-0 season.

Brady certainly has the talent around him on the Bucs to make a run at perfection again in 2020, but I’m sure Tampa Bay would happily settle for a playoff berth for the first time since 2007.

Now that they are together in Tampa, take a look back at the 2005 AFC Wild Card game between Tom Brady’s Patriots and Byron Leftwich’s Jags. 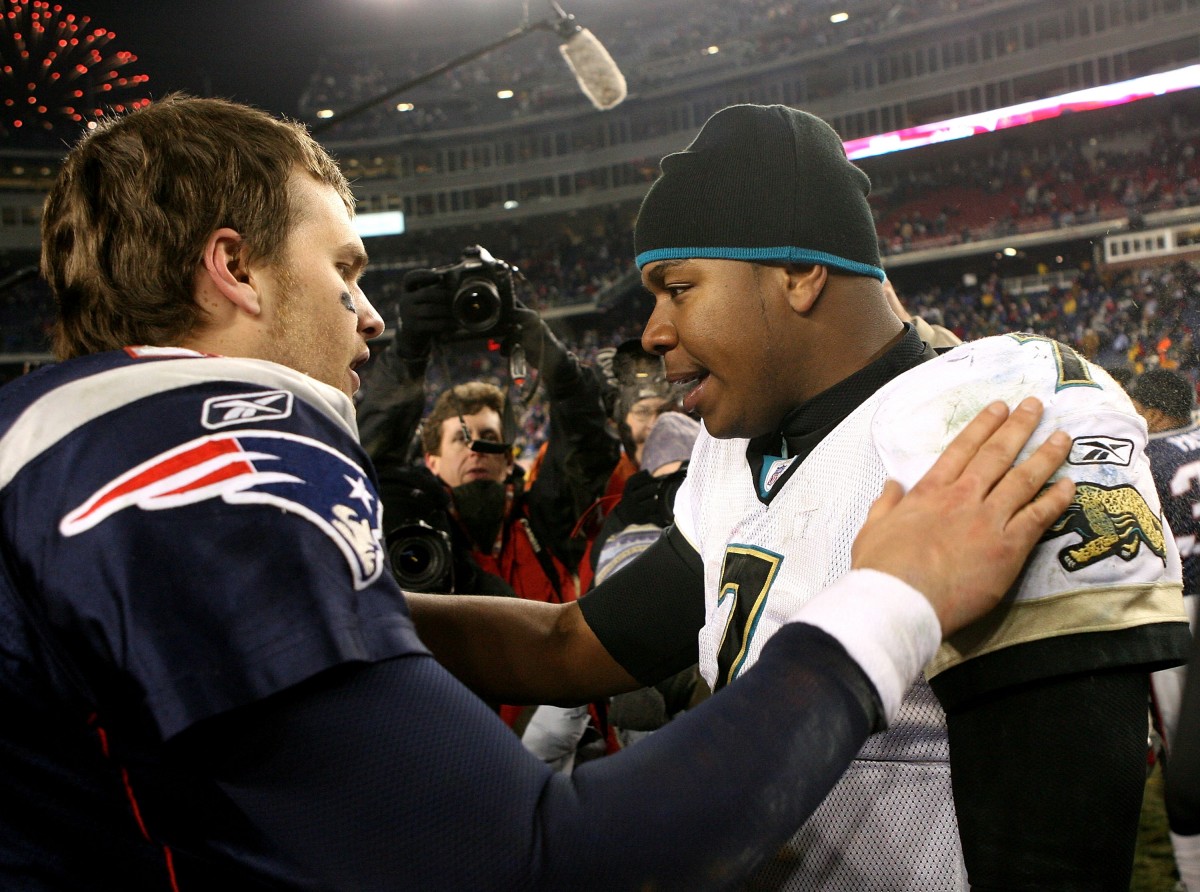 In honor of Flashback Friday, take a look back now at highlights from that game.

Watch new Buccaneers quarterback Tom Brady lead his old team, the Patriots, to victory over his new team back in 2017. 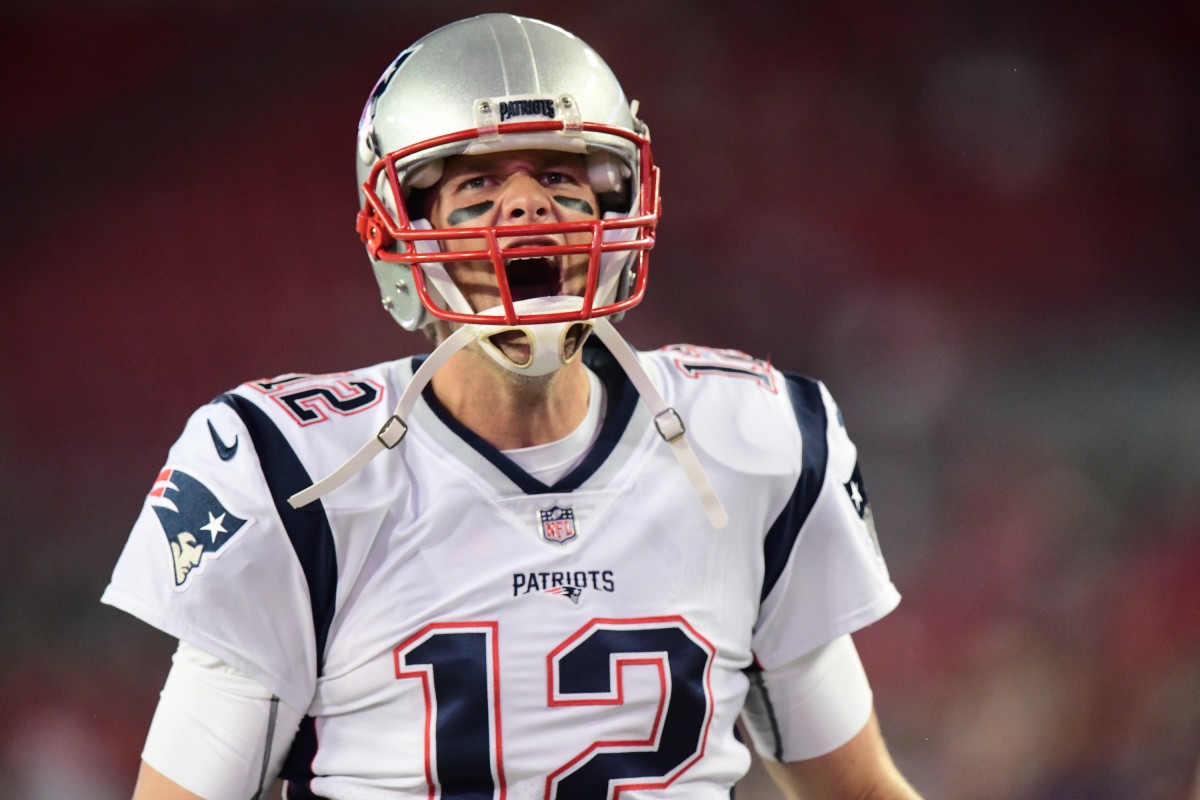 Tom Brady is a Tampa Bay Buccaneer now, meaning the six-time Super Bowl champion will have a chance at becoming the first quarterback in NFL history to play a Super Bowl in his own stadium, as Super Bowl LV will be at Raymond James Stadium next year.

But Brady is no stranger to RJ Stadium, as he and the New England Patriots visited the Bucs for a Thursday night showdown back in Week 5 of the 2017 season. The Pats walked away with a 19-14 victory.

Take a look now at some of the highlights from that game. It’s crazy to watch Brady play and think that in a few short years he’d be calling that stadium his new home.

Now that quarterback Tom Brady is heading to the Buccaneers, will wide receiver Chris Godwin hand over the infamous No. 12 jersey? 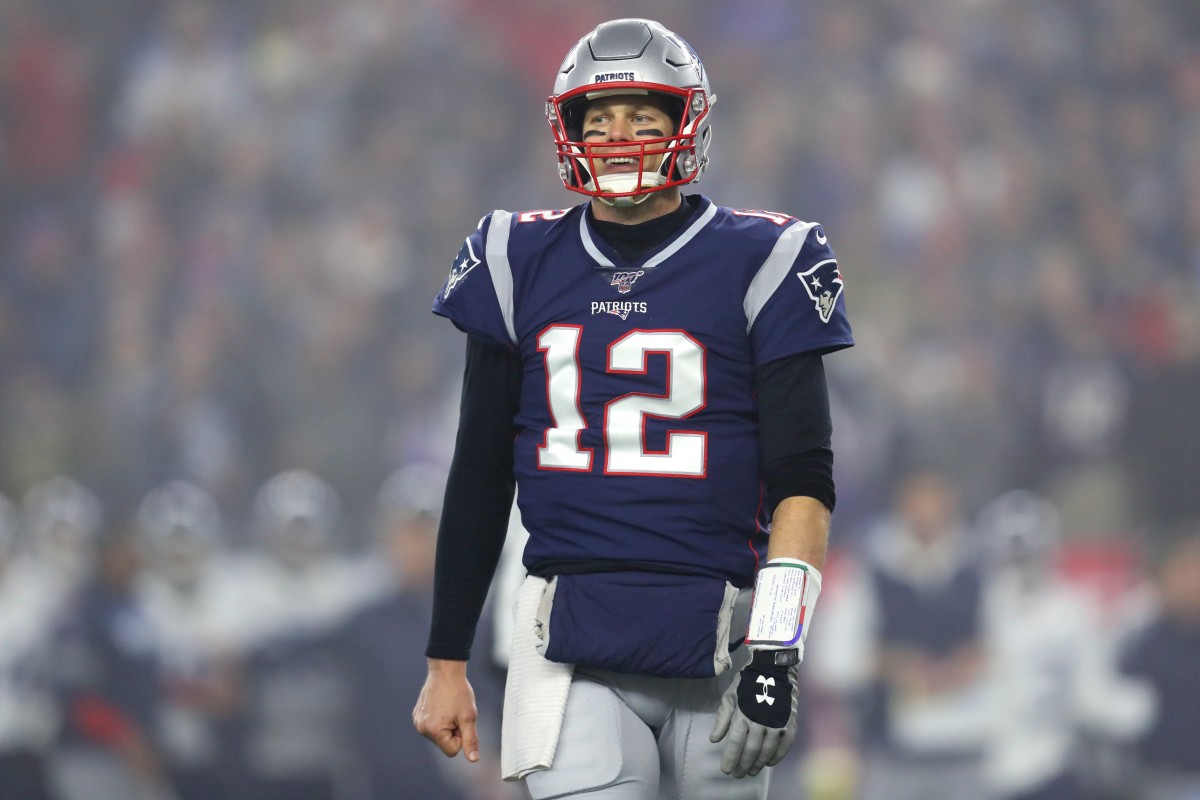 Now that Tom Brady has officially signed his contract to join the Tampa Bay Buccaneers, it’s time to address the elephant in the room: that No. 12 jersey.

As I wrote the other week before Brady announced his decision to leave the New England Patriots, the Bucs’ potential signing of the Golden Boy could make things awkward for Pro Bowl receiver Chris Godwin, who dons the No. 12 jersey for Tampa Bay. Brady wore 12 his entire 20-year career with the Pats and made it part of his infamous TB12 brand.

So, now that Brady is officially Tampa bound, what will Godwin do? The receiver answered that question in a video interview with the Bucs’ website.

“Obviously if he doesn’t want it, or if he’s not making a big deal out of it, I’m definitely going to keep it. We’ll see how that goes. I think just out of respect for what he’s done, what he’s accomplished, just kind of the career he’s built for himself, you have to lean into that respect.”

Godwin has worn the No. 12 since his high school days. Brady, who wore No. 10 at Michigan, wanted that number when he joined the Pats, but it was already taken. Turns out it was the Patriots’ then-equipment manager who assigned Brady No. 12.

Even if Brady wanted No. 10, that number is already taken by wide receiver Scotty Miller. It should be interesting to see which number Brady eventually lands on. But, one thing is for sure, you can bet his Bucs jersey will be one of the top sellers in the league next year.

Take a look back now at the highlights from the Tampa Bay Buccaneers’ big Super Bowl XXXVII win over the Oakland Raiders. 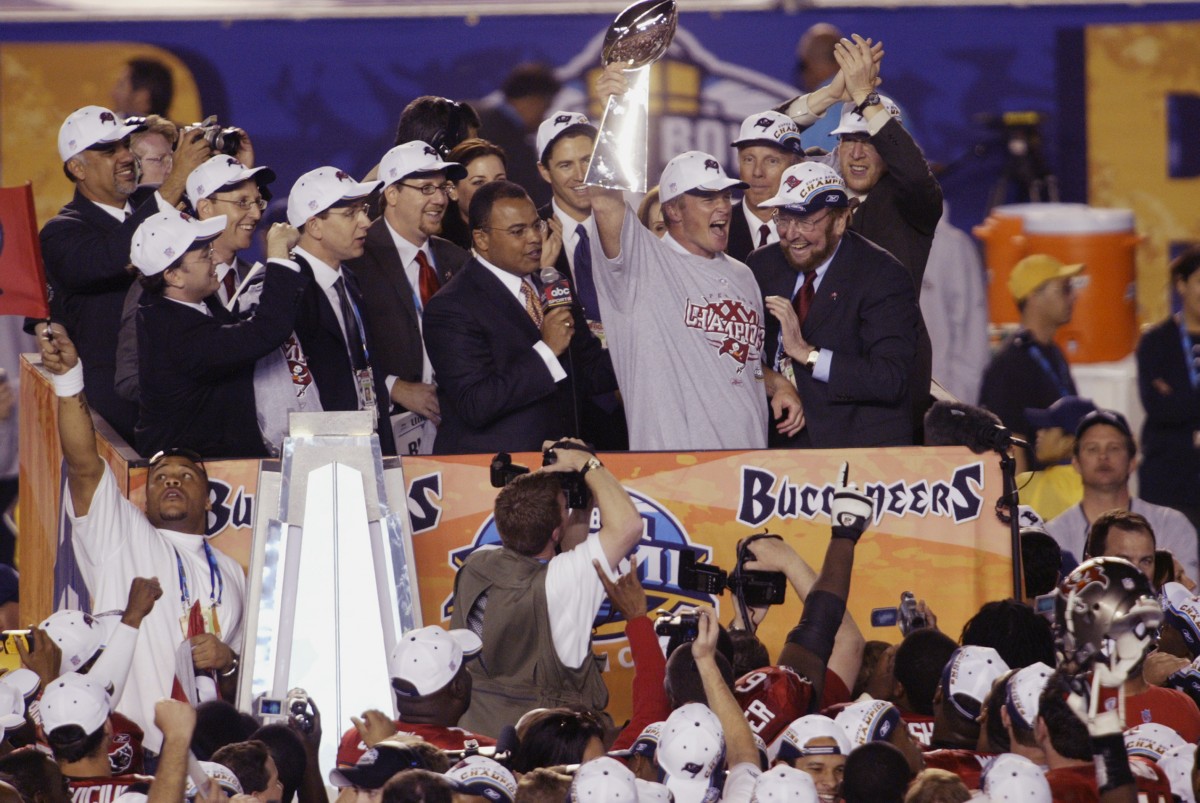 Super Bowl LIV will finally kick off on Sunday when the San Francisco 49ers and Kansas City Chiefs take the field in Miami.

While the Chiefs came within one win last year of playing in Super Bowl LIII, the Niners have come a long way since their 4-12 finish in 2018. San Francisco has gone from selecting second overall in last year’s NFL draft, a pick they used on Nick Bosa, to playing on Super Bowl Sunday.

The Niners are certainly no stranger to championships, but a turnaround like this has to be admired. And, speaking of turnaround, perhaps no franchise has experienced the highs and lows of NFL life quite like the Tampa Bay Buccaneers, who went from an 0-14 inaugural season in 1976 to hoisting the Lombardi Trophy following the 2002 season.

Take a look back now at the highlights from the Bucs’ big Super Bowl XXXVII win over the Oakland Raiders.