And don’t forget about the $10 million cash prize, too

Nothing feels better in a competitive environment than coming out as the best once the dust settles. Usually, those standing last are rewarded. Think — Olympic medals, championship belts in boxing and now even the NBA Summer League championship rings.

And if you think those are nice, wait until you get a glimpse of what Norway’s Espen Jorstad received for his recent World Series of Poker victory in Las Vegas.

No, I’m not just referring to the $10 million in prize money he took home for winning the tournament (although, SHEESH).

Jostens reveals the @WSOP winning bracelet given to Norway’s Espen Jorstad has 1,985 diamonds, 671 black diamonds and 111 rubies for a total carat weight of 55.48. There is removable, solid-gold poker chip attached at the back that can be used as a card protector. pic.twitter.com/WS0y903zfZ

A removable gold poker chip that can be used as a card protector? I thought I had seen it all. This is some creative stuff.

My question is this: Is this bracelet something y’all would wear around? Or is it too valuable?

These prizes keep getting better and better.

What a hand for the WSOP Main Event title! 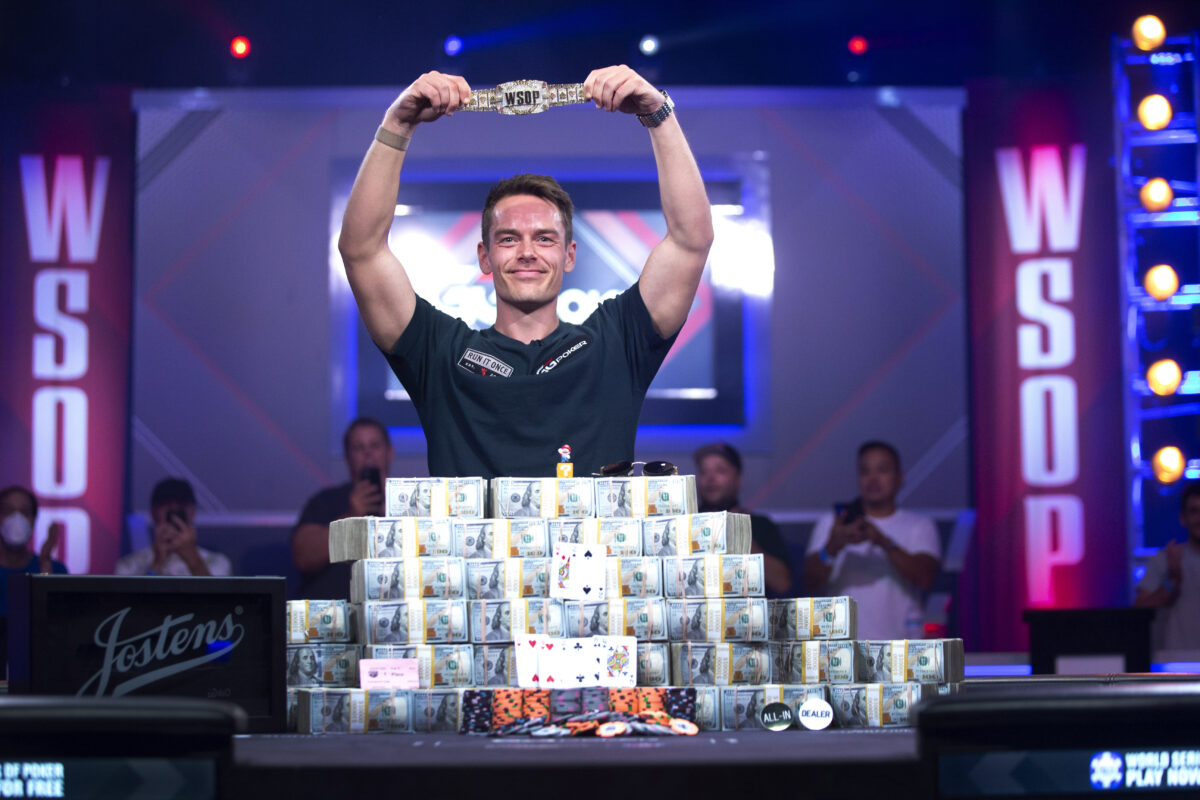 We have a 2022 World Series of Poker Main Event champion.

It’s Espen Jorstad, who went head to head against Adrian Attenborough and ended up with the champion’s bracelet … and $10 million.

And the hand that ended it all was pretty intense.

Let’s break it down: Jorstad started by calling with Queen-2 and Attenborough simply checked the big blind with Jack-4.

The flop couldn’t have been worse for Attenborough: 2-4-2 giving Jorstad three of a kind and two pair for his opponent. Jorstad simply bet four million, Attenborough raised to 14 million, Jorstad re-raised to 32 million and Attenborough called.

The river? A QUEEN. Oh boy. That’s a full house for Jorstad. Attenborough is done for but doesn’t know it. He checks. Jorstad thinks about it and goes ALL IN. Attenborough calls, the cards get turned over … and Attenborough curses, knowing it’s all over.

Check it out (and WARNING: NSFW language in there!):

Espen Jorstad puts Adrian Attenborough into the tank once more.

With his full house, Jorstad claims victory in the Main Event and the $10M first-place prize. 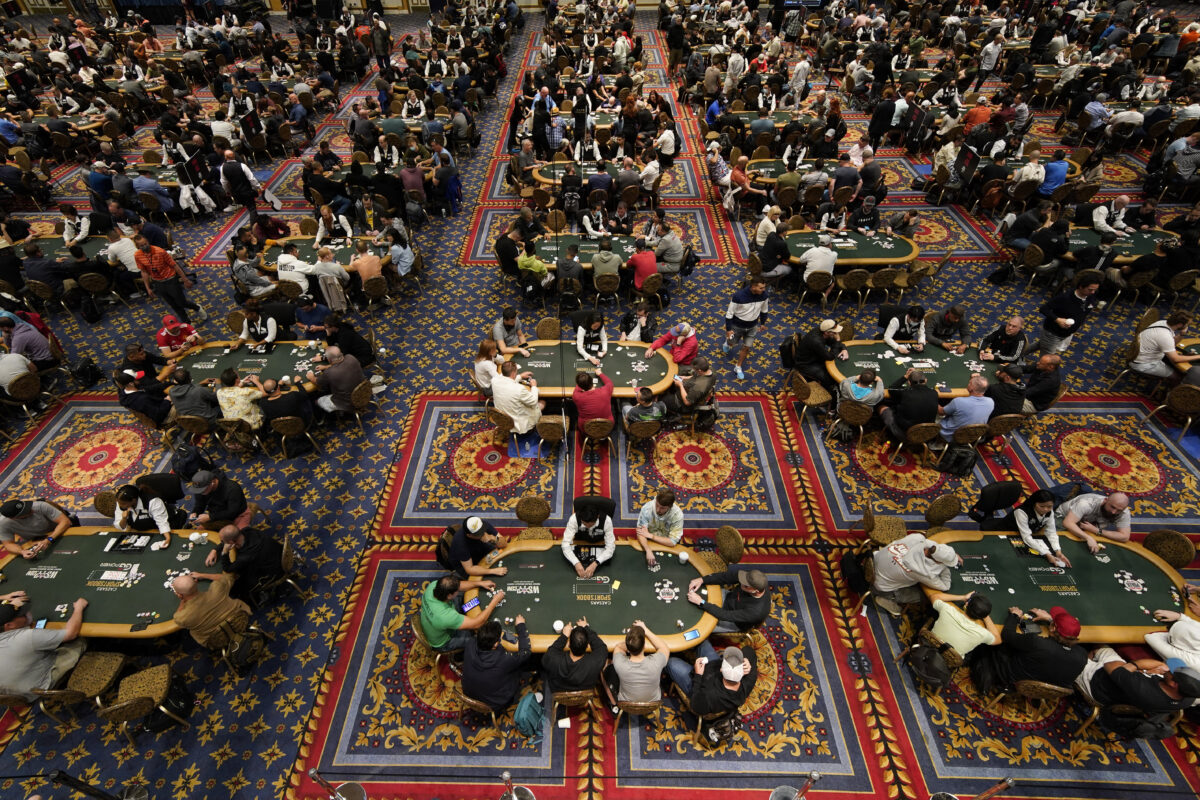 Sometimes, the best move in a poker tournament — especially the World Series of Poker Main Event, which is taking place as we speak — is to lay the cards down.

You don’t know it at the time, perhaps, but maybe when you look back at the televised hand, you realize it was the right call even if it was a rough one to go through.

That’s what happened with David Diaz.

The footage below picks up with Diaz holding Ace-Queen against Jeffrey Farnes, who has Kings in his hand. The board is King-2-Queen, and another Queen has been revealed on the turn. There are 11.6 million chips in the pot, and Diaz has 27.8 million to Farnes’ 28.15 million.

This could be a serious disaster. Diaz has three queens, but Farnes has a full house. Diaz bets four million chips and Farnes simply calls.

The river? Another 2. A full house with Queens for Diaz, but the Kings full from Farnes would beat his hand. Diaz thinks it over and bets seven million … and Farnes raises to 18.8 million. Alarm bells go off in Diaz’s head, it seems.

And then he folds.

For poker players, the Main Event is truly a test of skill and endurance.

David Diaz, finding an incredible fold with queens full, shows that the players who have made it this far in the tournament are truly at the top of their game.

This is what the Main Event is all about. pic.twitter.com/mz38SljBzy

Diaz ended up in 13th place ultimately, and Farnes is still left at the final table!

What a World Series of Poker Main Event hand to win! 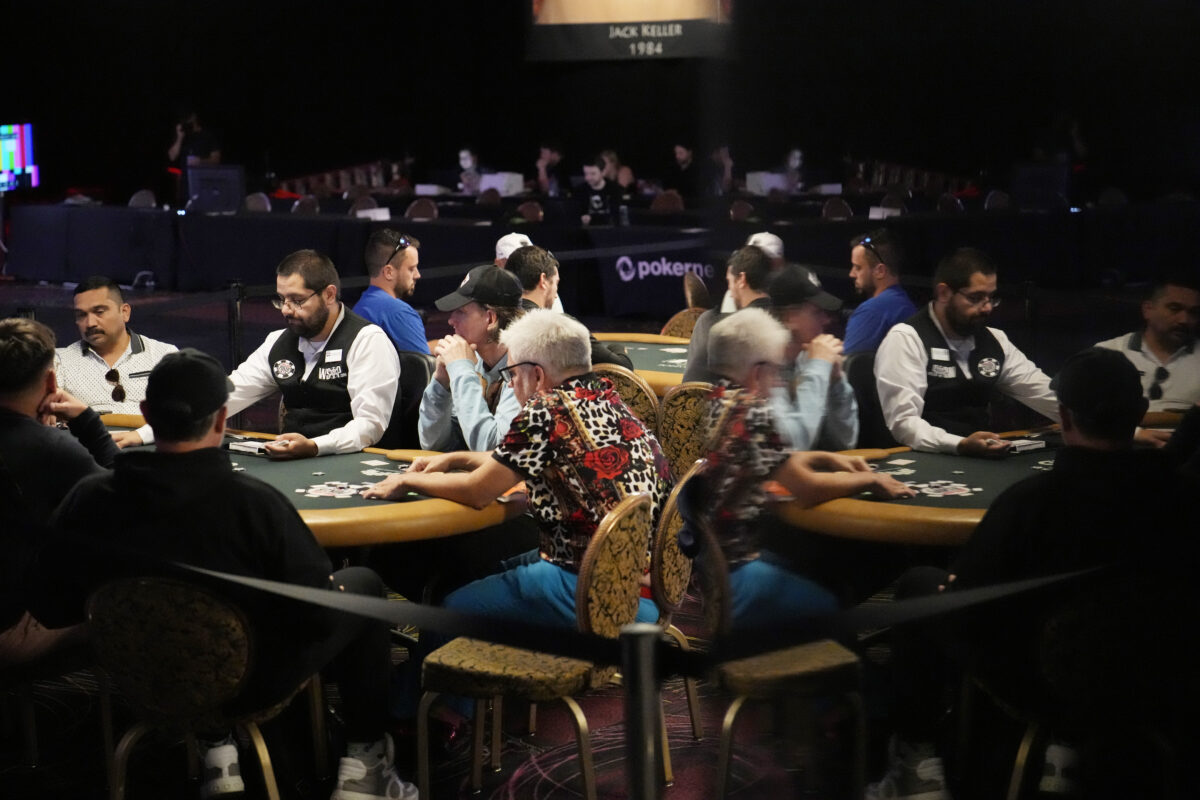 But we’re not there yet. First, you have to see this wild hand.

The worst news for Stanley Lee: He has Jacks. And when you have Jacks, sometimes, you can’t lay them down. And in Lee’s case? He raises all in for 1.84 million chips.

Or Krief and Cruz call, and the cards get turned over. Oh boy.

Here’s the thing: The flop is 5-8 of hearts-7 of hearts. And Or Krief has the Queen of hearts.

The turn? The 10 of hearts. WHOA. Suddenly, Or Krief has that flush draw … and the river is Ace of hearts.

ICYMI: Check out this wild hand from Day 6 of the Main Event with less than 100 players remaining.

Stanley Lee has jacks and moves all in over a raise and three-bet but Haim Or Krief has queens and Gilbert Cruz has aces, creating a massive pot! pic.twitter.com/FKjgEFsBTX

Or Krief would eventually finished 60th, thanks in part to this moment.

The 2022 World Series of Poker Main Event — the $10,000 No Limit Hold’em World Championship — will come to an exciting conclusion on Saturday with one person left holding the bag, literally.

The grand prize from a field that started last Sunday with 8,663 people is a whopping $10 million. The monetary earnings for first place also come with the newly designed World Series of Poker Main Event bracelet, which Master of Ceremonies Vince Vaugn debuted in style last week.

The total prize pool for the second-largest field of all-time is more than $80 million, with 1,300 players getting a share. Each of the top eight finishers will earn at least $1 million.

The World Series of Poker website has a full breakdown on payouts from the main event.

This was a wild ending to this hand.

This hand is a pretty interesting one. It stars Aaron Zhang and Dan Smith, and the video picks up on the turn. Both Smith and Zhang have King-Jack offsuit, and the board is Jack-6-9-King, giving them a tie should the hand play completely out.

The river? A 10. So that means both players have to look out for a straight if one of them has a Queen. I didn’t see the betting patterns before, but Zhang comes out firing with 780,000. Smith has to think about it, especially with 2,490,000 in the pot.

But he folds! And the conversation that follows is great. Smith asks if Zhang was bluffing, eventually revealing he had King-Jack.

We can finally solve the mystery of whether or not Aaron Zhang bluffed @DanSmithHolla.

▶️ – The stream is live. Watch it here: https://t.co/ZtR0Qx47zf pic.twitter.com/cpBakgaJvr

He couldn’t have found a better Darth Vader costume? 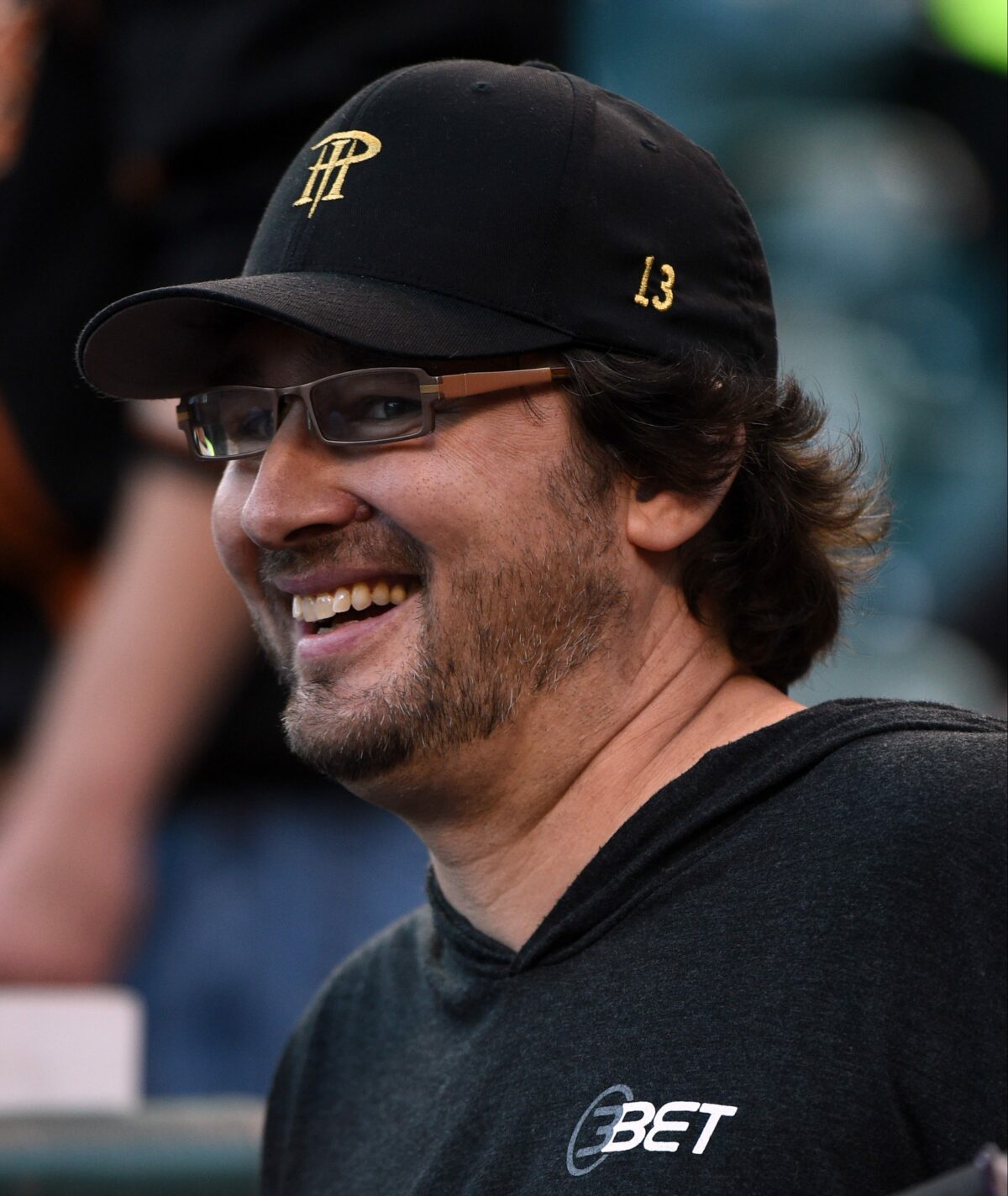 It’s that time of the year again when poker legend Phil Hellmuth digs deep into his bag to come up with a unique entrance for the World Series of Poker Main Event.

Hellmuth has entered as Thor, Gandalf and even a boxer in years past. He decided to enter the 2022 event dressed as a character from Star Wars.

That character is Darth Vader.

Scare tactic? Trying to loosen the vibes? Jedi mind-tricking his competition? Whatever the case, Hellmuth, the holder of 16 WSOP Gold Bracelets knows how to get himself ready for the Las Vegas event.

Will he leave with bracelet No. 17?

Vaughn made a royal entrance.

Vince Vaughn is this year’s World Series of Poker Celebrity Master of Ceremonies. As such, the actor received royal treatment in his arrival Wednesday at the Bally’s Events Center in Las Vegas for the 53rd annual WSOP Main Event.

Dressed for the theme, the Wedding Crashers star was carried out to the final table by a full Roman Royal Court as he debuted the newly designed Main Event bracelet along the way. It made for quite the scene.

Wednesday’s event was the last of four $10,000 No-Limit Hold’em flights. Vaughn kicked off the event with a few words, including the “shuffle up and deal” announcement.

To recap the morning, we're reliving the moment with our Master of Ceremonies Vince Vaughn! #WSOPMainEvent pic.twitter.com/HwevIKRG67

According to a Caesars press release, the bracelet Vaughn unveiled is custom created from 500 grams of 10 karat white and yellow gold and features 2,767 various stones, including rubies, and black and white diamonds.

“As Master of Ceremonies for the World Series of Poker, I couldn’t be more excited to play a role on the Las Vegas Strip by kicking off the biggest and most prestigious poker tournament in the world,” Vaughn said. “This is the Main Event and a World Champion needs an incredible trophy, not just some lousy ring.”

The World Series of Poker may still be the ultimate level of competition among the sport’s top player, but don’t sleep on the upstart BetMGM Poker Championship Main Event. Not after the way Joey Weissman cleaned up the final table to win the tournament over the weekend.

And especially not after the absolute bonkers way Weissman knocked Michael Wang out of the tournament.

The two former WSOP winners went all-in head-to-head before even seeing the flop after Weissman was dealt an ace and jack of diamonds to Wang’s pocket queens. Wang had the better odds shortly after the flop, and that would’ve held if not for the river card giving Weissman a royal flush to beat Wang’s full house in stunning fashion.

Just look at the shock on the faces of both players as hand comes to a close.

That just doesn’t happen. The chances of picking up a royal flush are 1 in 30,940 hands or 0.0032%. The odds of a royal flush defeating a full house are too small to even consider measuring. It’s laughable, really.

And now Weissman is laughing all the way to the bank. After defeating Wang, he went on to clear out the rest of the table, earning $224,236 and a first place finish.

Some days you do, indeed, win. 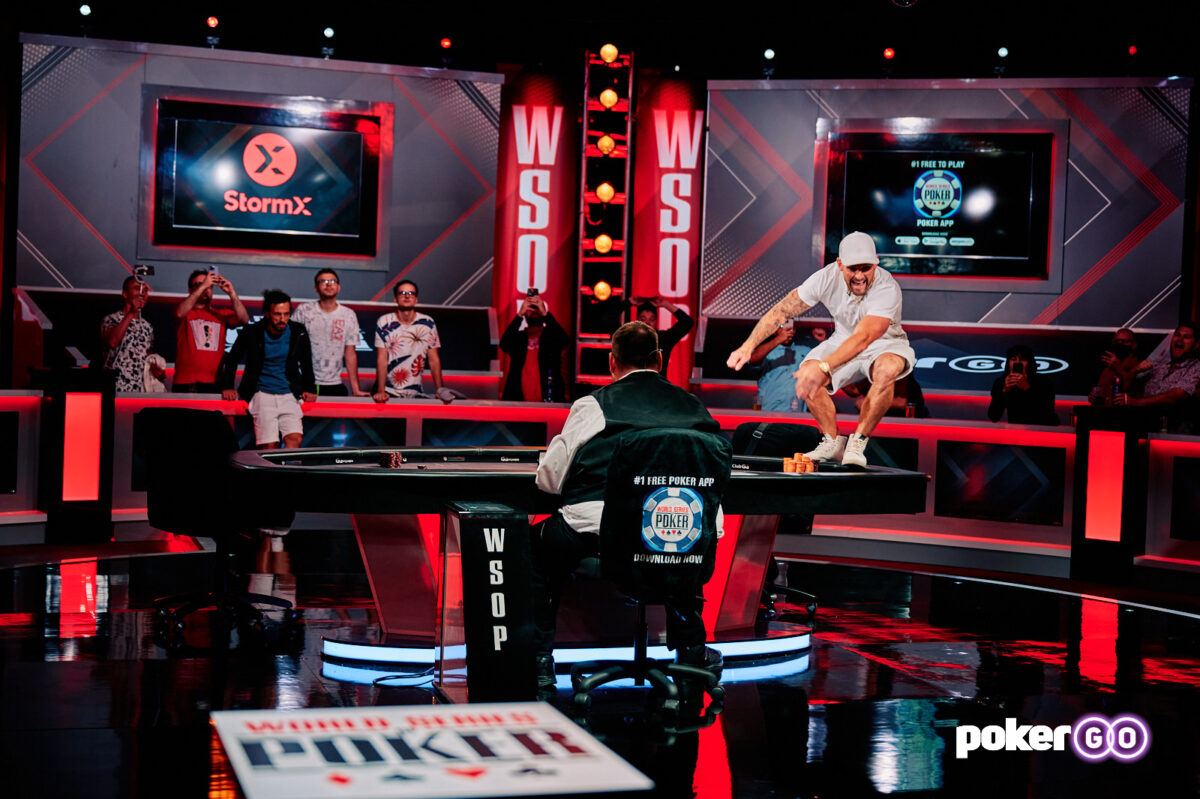 Mike Jukich was so overcome with joy after his World Series of Poker win that he jumped on the table of the main stage. That’s what a jackpot of nearly $1 million will do.

Jukich earned his victory in the $1,500 Monster Stack, Event No. 21 of the 2022 World Series of Poker, after opponent Mateusz Moolhuizen went all-in on a pocket king and queen of clubs. With a high-card ace, Jukich claimed his first gold bracelet and a total of $966,577.

He was the last man standing out of a field that started with 6,501 entries.

Watch the incredible final moments of @WSOP Event #21: $1,500 Monster Stack as Mike Jukich, filled with emotion, takes a leap onto the table after sealing his victory.

A full replay of the event is available now on PokerGO.

In case you didn’t get a good look at it, here’s a freeze frame. 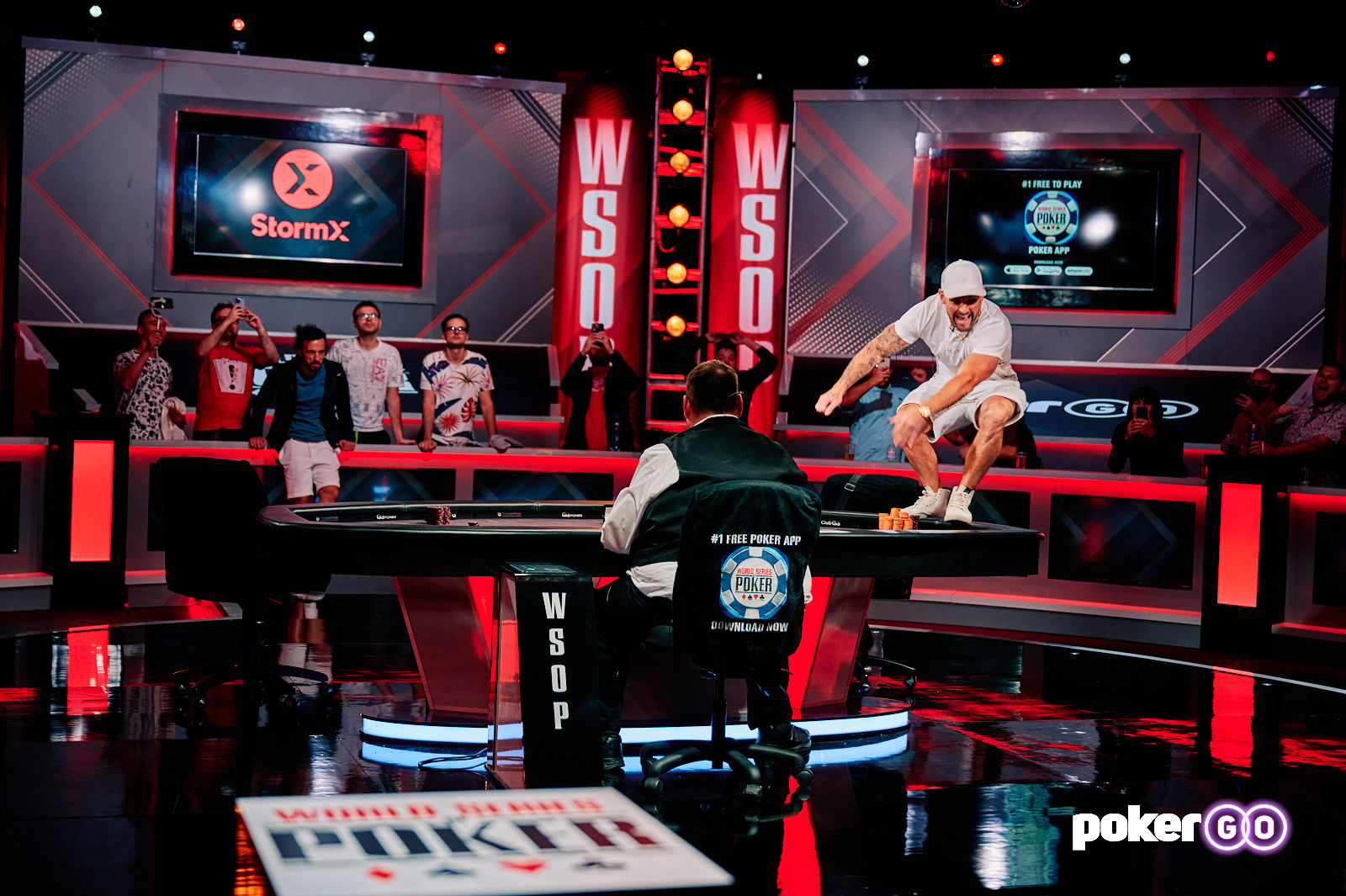 Jukich’s excitement comes with good reason. He’d apparently been chasing this moment since losing his chip lead and finishing 12th in 2013.

“So, what’s haunted me before was in 2013 I think I was chip leader with 12 left in a $1,500 event and $720,000 up top and I ended up getting 12th and was devastated,” Jukich said in a PokerGo press release. “So I didn’t get in the Thunderdome, didn’t mark it off the bucket list of making a WSOP final table, none of that. I was super disappointed. I just never really ran good any summer I was out here until I finally had a deep run in the Main Event after the 12th-place finish. But yeah, I was pumped this year.”